If you thought you could live without a slide rule on your wrist, this might just prove you wrong...
Rob Nudds
comments 3
Share

Hamilton is having a good year. A spate of affordable and versatile releases was perhaps crowned earlier this summer by the Hamilton Khaki Aviation Converter collection. It was popular among the Fratello team when it was announced. As such, I’m taking another look at it today as it is now available to buy (after a long wait).

Rather than burying the lede for the sake of suspense, I will do something rather unusual for Fratello and mention the price in the first paragraph. That’s not because the cost of these watches is the only reason to buy them, but rather because it makes assessing the quality of the design elements (and their execution) all the more interesting. The automatic version of Hamilton Khaki Aviation Converter starts at €1,095. There’s a GMT that kicks off at €1,445 on the leather. The chronograph?  That kicks off at €1,995 on a leather strap.

…aesthetic and material quality from a brand we trust…

We often hear debates about exactly how much a Swiss-made watch should cost. Of course, there is little agreement on actual figures, but pretty much everyone that counts themselves a watch buyer would like it to be — how can I put this — less… However, I think it’s fair to say that we’ve become quite indoctrinated by the marketing madness and high-ticket prices of the industry’s powerhouses and are thus willing to pay quite a lot of money for something of perceived aesthetic and material quality from a brand we trust (and one that is commercially proofed by our peers). And then Hamilton — an old, respected, group-owned brand — comes along and changes the script. 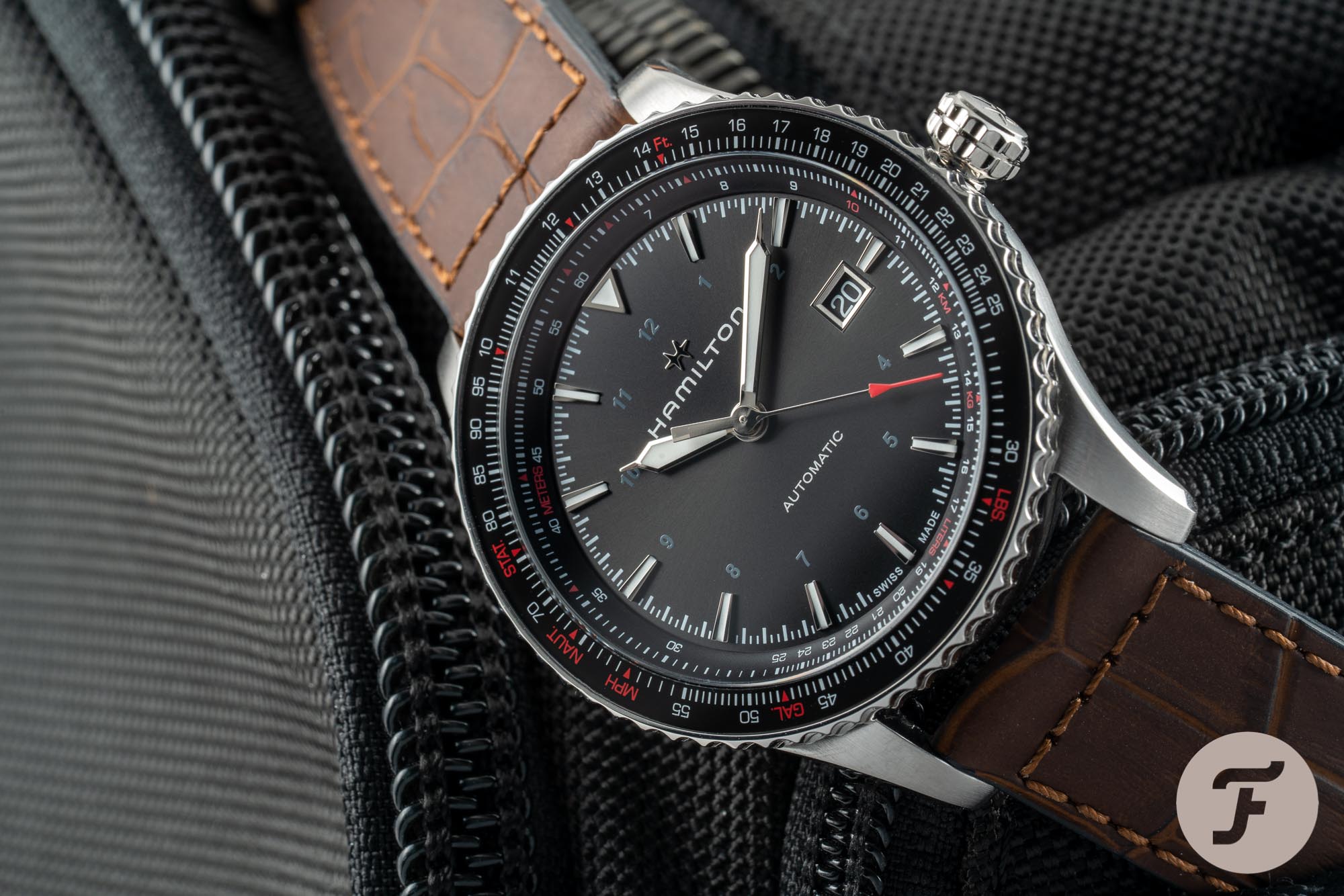 If someone told you about a Swiss-made mechanical chronograph from a widely-known brand boasting an esteemed heritage coming in at under 2,000 Euros, you’d be forgiven for thinking the design would be bland at best, atrocious at worst. But the truth is, these Converters are pretty darn attractive. Part of their handsomeness is down to DNA. These watches come from a long line of pilot’s watches and still have that instrument-heavy vibe going for them. 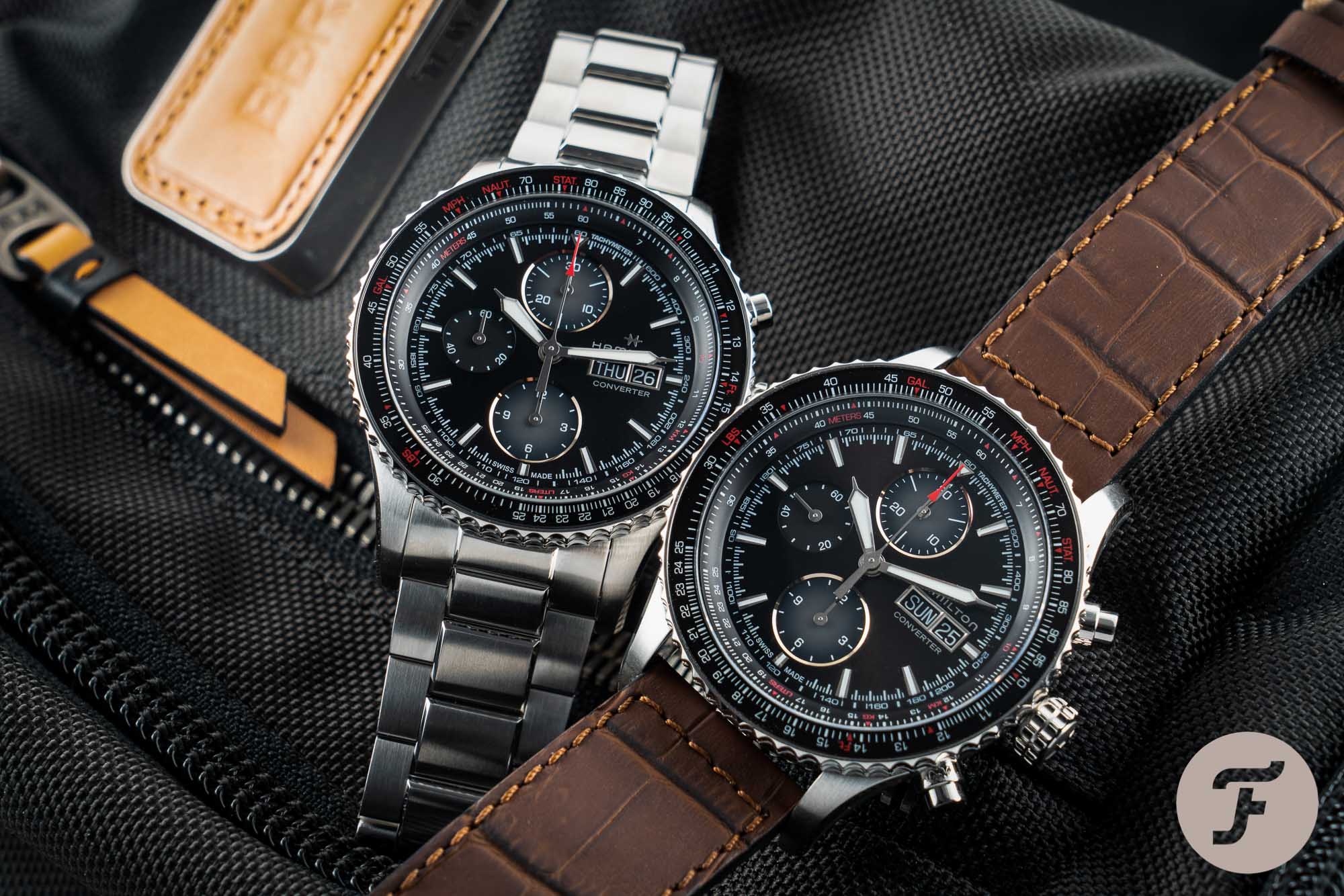 In fact, it is this “tool” quality that enhances the Khaki Aviation Converter watch’s longevity. This kind of watch never really goes out of style. It is designed around a task. Its form follows its function. As such, it makes visual sense. Anything that makes visual sense finds making friends very easy. While some watches are a headache on the wrist, glancing at any of these neatly laid-out dials is a soothing experience. 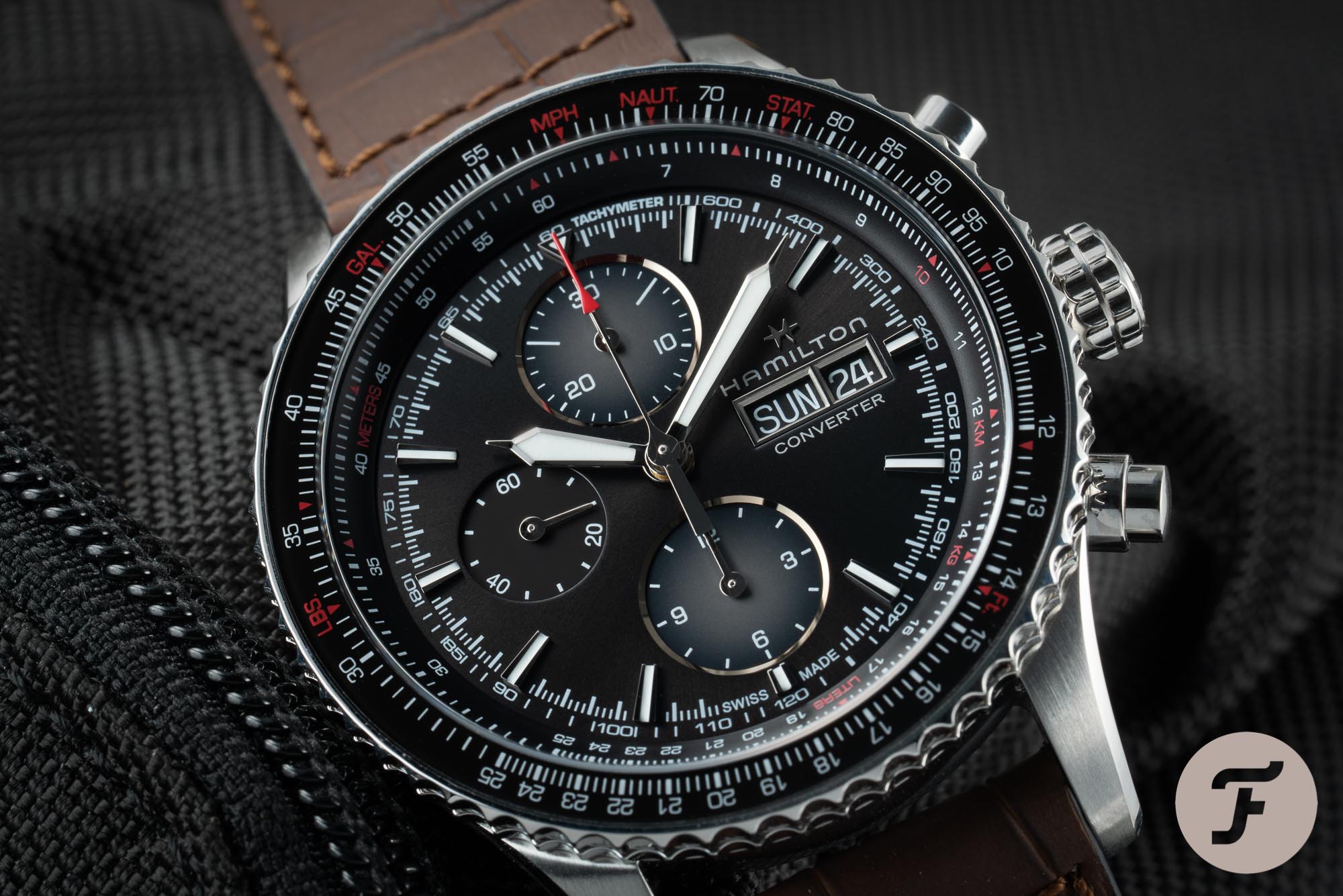 Because of the excellent dial balance of the Chronograph models, what could very easily have come off as a busy design does not. Instead, every element is given enough space to breathe so it does not feel cramped, but not so much room that any single element feels isolated, forgotten, or tacked on.

The classic Valjoux layout (with sub-registers at 12, 6, and 9) comfortably hosts the day/date complication at three. The reduced size of the sub-dial at 9 o’clock (and the decision not to rim it with a polished silver frame, is a brilliant design decision. By framing the much more diminutive day/date, the edgeless going seconds sub-dial balances the horizontal axis. It’s also clever because it literally fences off the chronograph sub-counters from the main display, creating a subconscious break between them and the actual time reading. 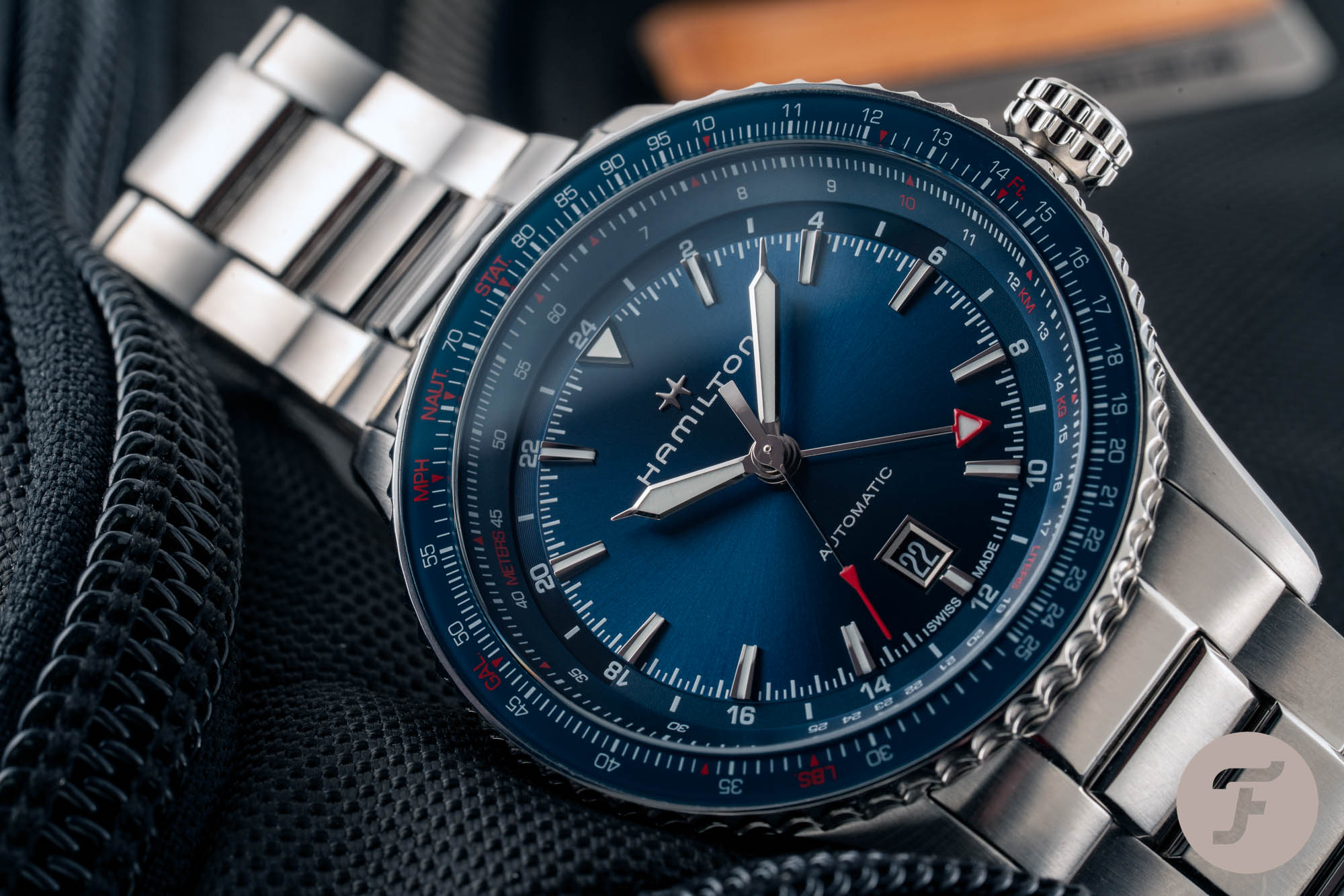 Back in July, Ben commented on this piece. He too was a fan. His favorite? The blue-dialed GMT model, which I also like because of the extra flash of red brought into play by the GMT hand. But one thing all the converter models share is the slide rule bezel. That is, in fact, where the collection gets its name. 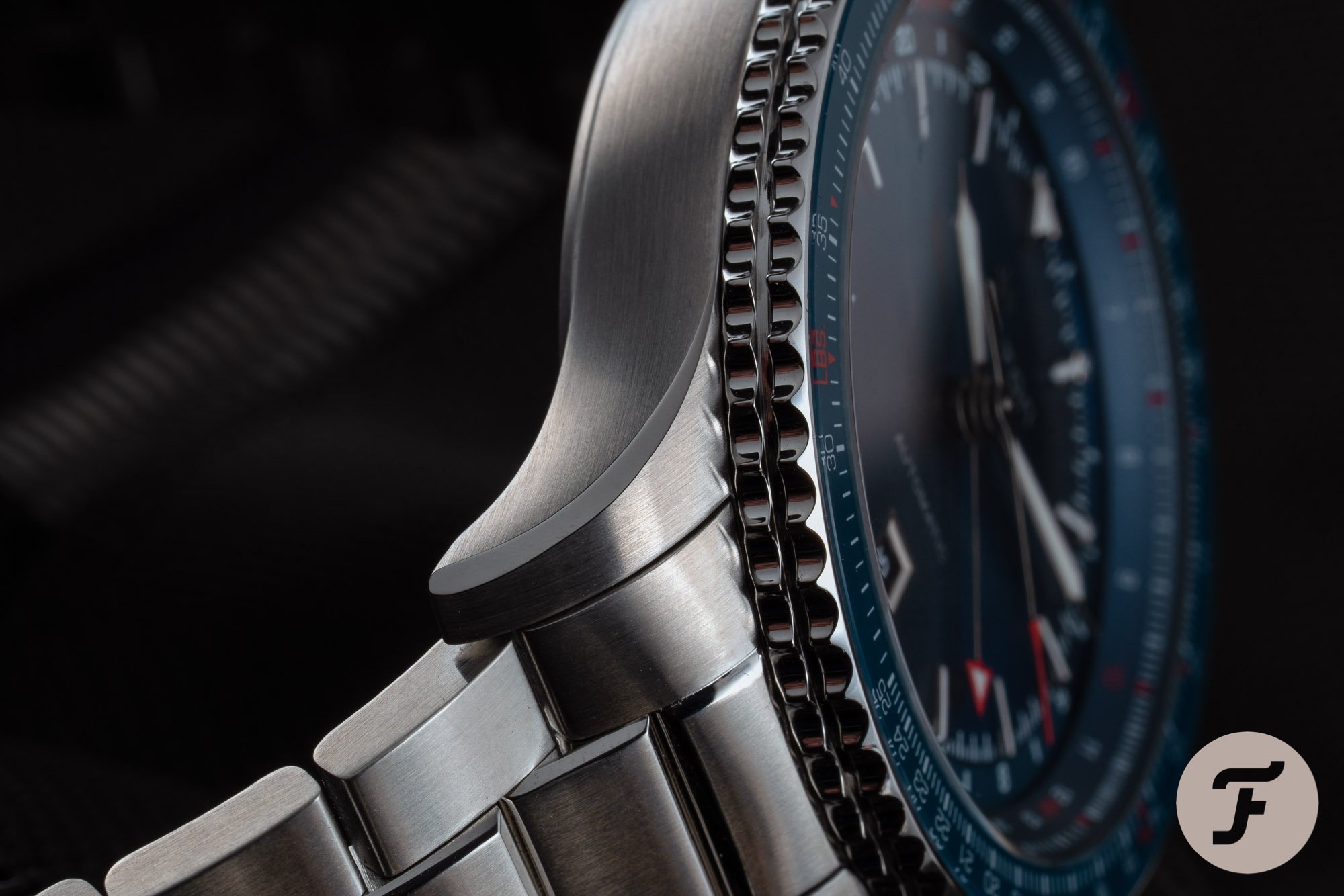 In Ben’s article he said, “For those with their feet on the ground, rather than head in the clouds, the slide rule bezel also has everyday usage. You can use it to calculate tips and convert units of measurement. But, of course, it is rare for wearers of the watches with slide rule bezels to use them as intended. That does not stop the look of the bezel from being a refreshing throwback to the early days of aviation, especially for the pilots that yearn for the golden age of travel.”

What’s it really for?

He’s right. It is rare to use a slide rule for its intended purpose. But what if you really want to? What then? Well, although I am no pilot (the very thought of me behind the controls of an aircraft should chill you to the bone), I will do my best to explain what information you’re able to glean from a slide rule watch when it is used properly.

In the pre-digital age, pilots were often required to perform simple calculations with analog tools. The handy circular slide rule bezel (nicknamed the “whizz wheel” back in the day) works in conjunction with a fixed scale on the dial. One thing you should be aware of is that the slide rule doesn’t necessarily display the exact number you’re looking for as there are only so many numbers one can legibly print onto something that size. But the results are commutable. You have to get creative with the figures, but as long as you can divide and multiply things by ten, you should be okay.

By that I mean if, for example, you’re trying to work out a 15% tip for an (expensive) trip to McDonald’s that cost you 200 bucks (that’s a lot of Big Macs), you’d line the 20 of the outer ring (to represent 200) up with the red 10 on the inner ring (used for calculations) and then check where the number 15 on the inner ring is pointing to on the outer ring. In this case, it would be 30, which is the correct answer. There is no 200 on the dial, so you have to use 20 in its place but the answer is still useable regardless. 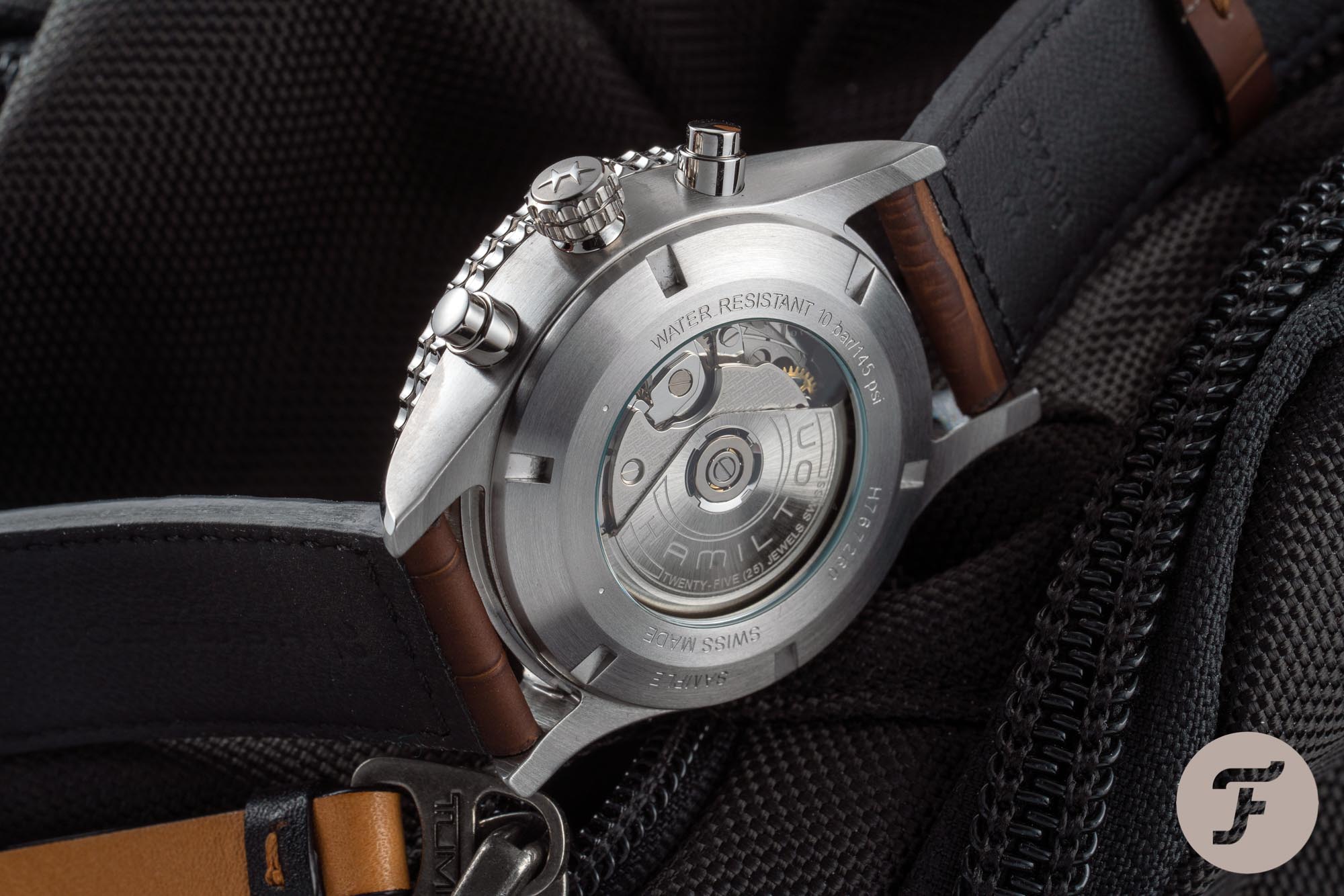 Pilots most commonly used these slide rules to work out fuel consumption, flight time, ground speed, and wind impact, as well as for performing quick conventions between nautical miles and kilometers, gallons and liters,  feet and meters, or pounds and kilograms, for example.

Most of you will associate slide rules with the Breitling Navitimer (and given that watch’s long history in this vein that is no surprise). What you might also notice, however, is how the scales look quite different on the Hamilton Khaki Aviation Converter. I’ve put a couple of images below so you can see them side-by-side…

That’s right, the two scales are the other way round. The Breitling has the markings “Naut”, “Stat”, and “KM” on the inner track. Meanwhile, the Hamilton prints this info on the outer ring. Functionally, this makes no difference to the calculations that can be performed, you just need to work with opposite rings. It means the red ten printed on the interior track becomes your most-used reference point.

I think that aesthetically both designs work very well, with the Hamilton coming off even more “techy” than the Breitling. I love how this information is printed in red and adds a bit of extra vibrancy to the mineral-glass bezel.

…traditionally, when you turned the outer bezel you were actually turning the whole sapphire.

Talking of that mineral glass insert, it is thanks to that component that the Converter models are all water-resistant to 100 meters. That’s quite uncommon for slide rule watches as, traditionally, when you turned the outer bezel you were actually turning the whole sapphire. Consequently, the slide rule function compromised water-resistance given the gap between the rotatable component and the case.

I’d say that is a massive improvement and the kind of step it is necessary to take when implementing somewhat anachronistic functions like a slide rule into an otherwise modern watch. 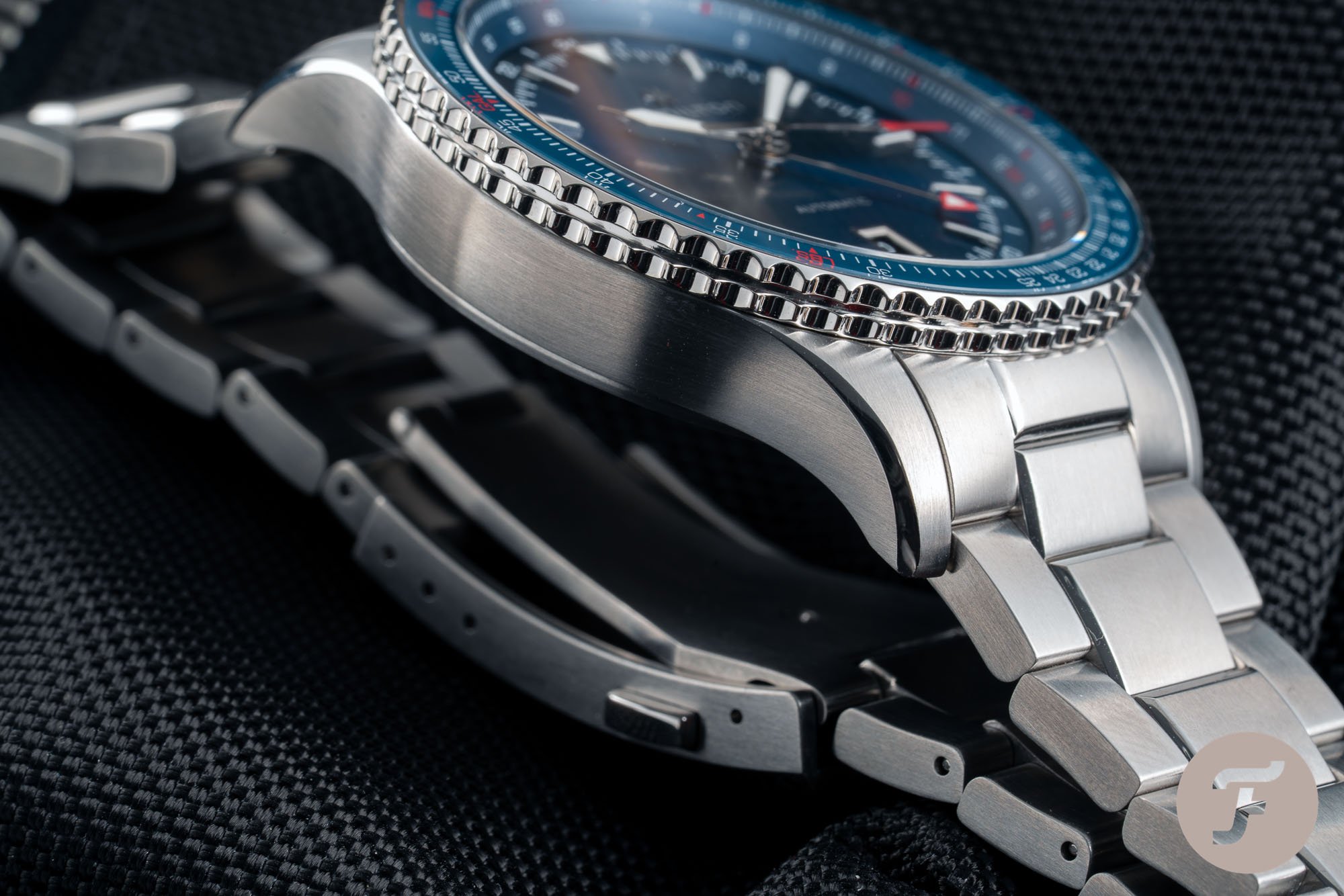 The automatic model measures 42mm and is driven by the durable H-10 movement with Nivachron balance spring. The H-10 has a famously souped-up power reserve and is able to run for 80 hours between winds. Both the GMT and Chronograph models come in at 44mm across. Inside the GMT, we have the H-14 caliber. The chronograph runs off the modified H-21-Si caliber, which features a silicon hairspring. The Khaki Aviation Converter Auto Chrono stands 14.6mm tall on the wrist, while the GMT is a bit thinner at 12.2mm. The auto is thinner still at a positively svelte 10.87mm. More information on Hamilton.