Tissot Announces A Chronograph For The Wildly Popular PRX Collection

When Tissot reintroduced the PRX line in 2021, it recaptured the hearts of collectors worldwide. Harking back to 1978, the PRX represents a particular Zeitgeist of watchmaking that is so popular now — the stainless steel sports watch with an integrated bracelet. The initial quartz models were succeeded by automatic versions with the Powermatic 80 movement. Now, Tissot is adding more weight to an already excellent collection with the announcement of the PRX Chronograph, available in two color/dial options.

Up to this point, Tissot has only offered the PRX collection with time-and-date options. That’s fine and a great way to test the viability of the collection. But now that the community has embraced the PRX with open arms, it’s good to see expansion into more complicated watchmaking. I feel like the chronograph is the next logical step. 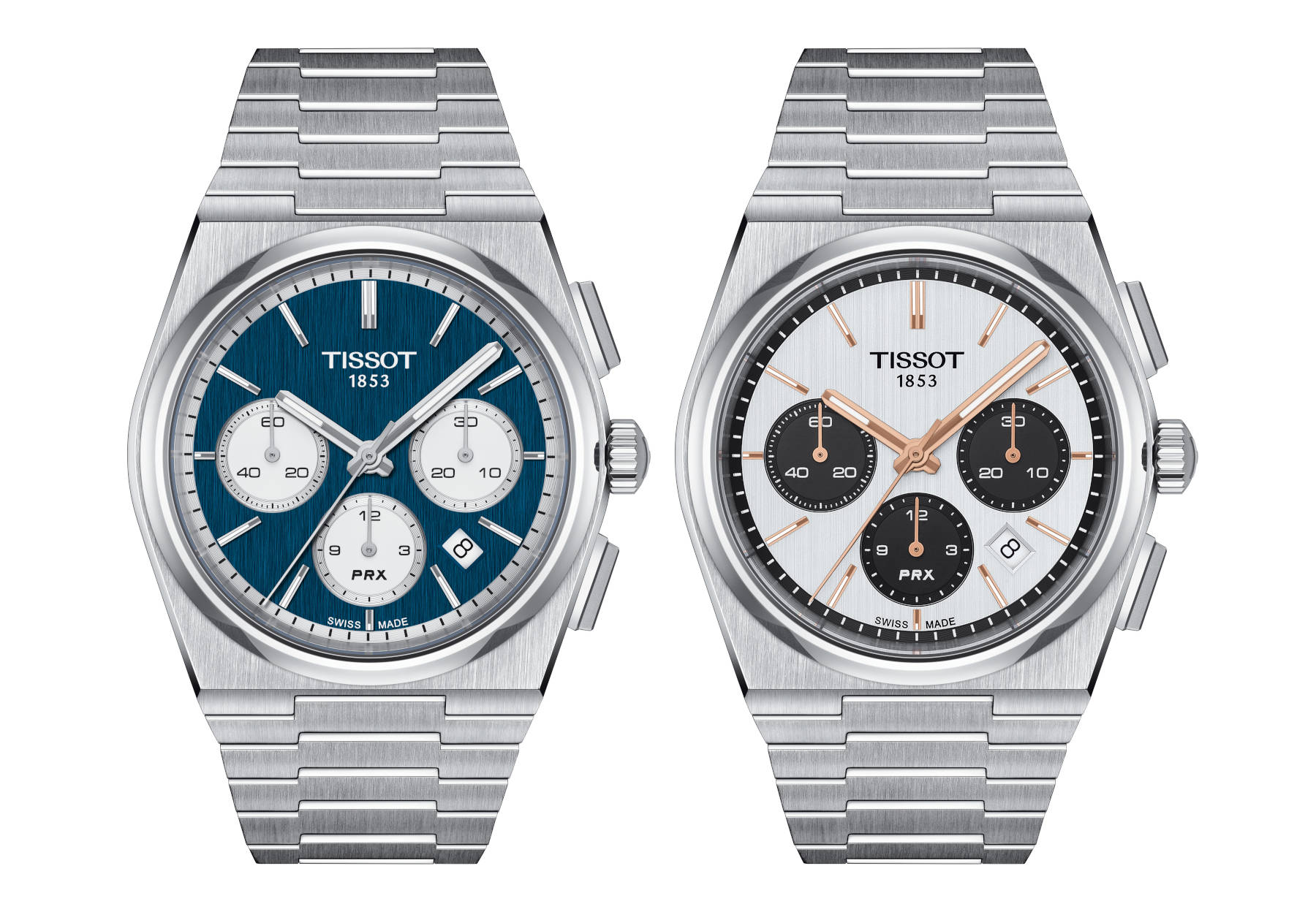 The PRX — Now with an automatic chronograph movement!

You’ll be glad to know that Tissot has opted for an automatic chronograph caliber for the PRX Chronograph. Rather than retreat to the relative safety and affordability of a quartz chronograph movement, Tissot has opted for the ETA A05.H31 caliber based on the trusty Valjoux 7753. This movement provides a classic 3-6-9 chronograph sub-dial layout and an impressive 60-hour extended power reserve. The movement and its skeletonized rotor weight are visible through a sapphire display case back. I have to say, I rather like the polished steel case back ring, which nicely contrasts against the brushed finish on the mid-case.

While I don’t have all of the measurements on hand, you can expect the PRX Chronograph case to be noticeably thicker than the time-and-date models in order to accommodate the thicker movement. That said, the larger 42mm case (up from 40mm in the prior models) will help to offset some of the thickness visually. 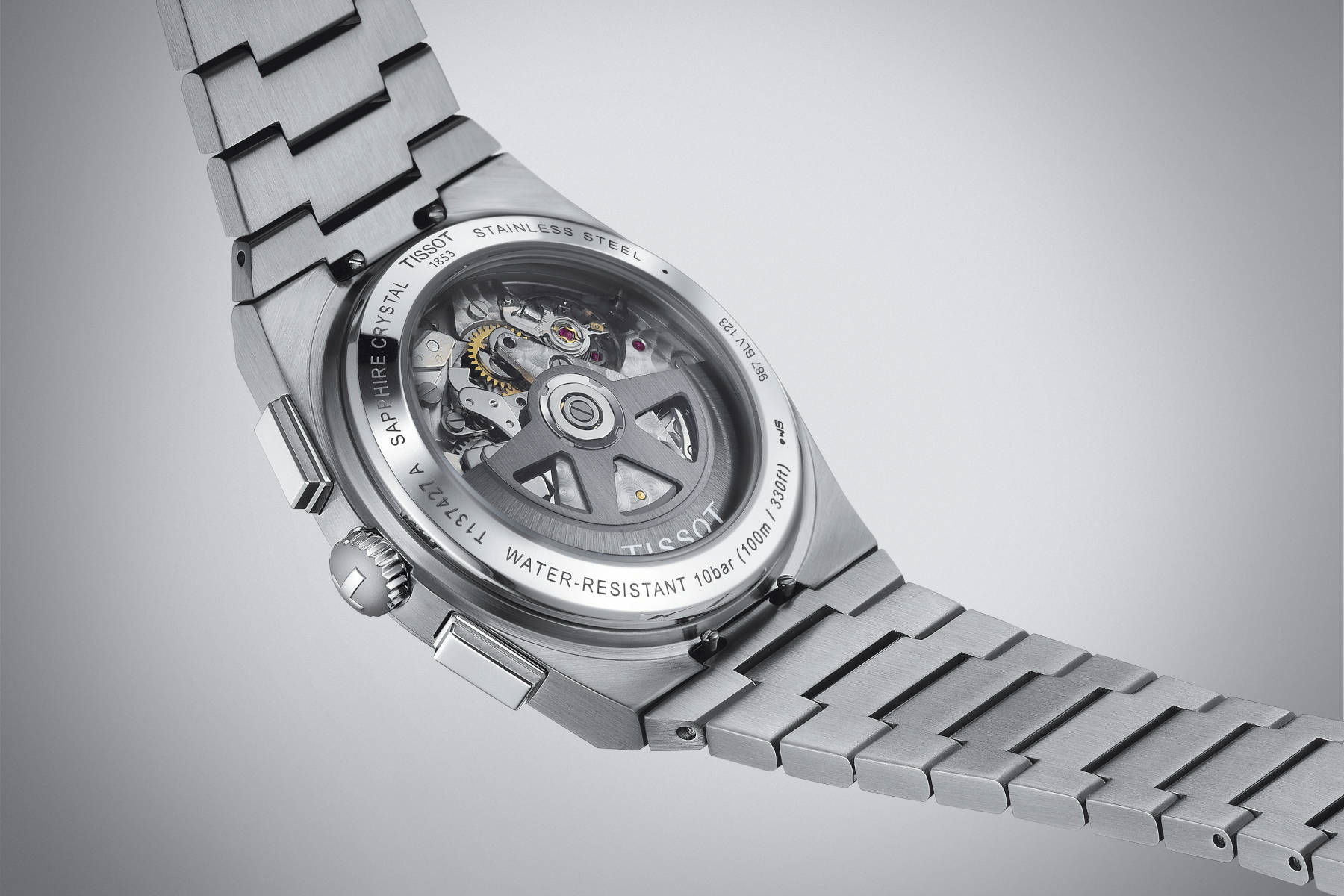 An integrated bracelet is a core feature of the PRX collection

As mentioned, the stainless steel case is 42mm in diameter. With the movement measuring 30mm in diameter, the smaller 40mm case would have thrown off the proportions. The case shape remains faithful to the PRX aesthetic, albeit with the addition of the chronograph pushers. Tissot has treated the majority of the mid-case and bracelet to a nice brushed finish, using polished surfaces as accents. The polished bezel, side bevels, and pushers offer a nice contrast and break up the uniform vertical brushing elsewhere on the case.

The bracelet integrates smoothly into the case, as you’d expected. The first link follows the lines and the lugs of the case, but it appears that there will be little articulation. I cannot confirm one way or another at this point in time, but if so, then it’ll only extend how the watch wears from a lug-to-lug perspective. The lug-to-lug is interestingly only supposed to be 41.5mm so the effect may be negligible if this is indeed correct. While the integration is very similar on the Powermatic 80 and quartz models, the PRX Chronograph’s case thickness makes it more apparent here. It’s purely speculation, but I’d be remiss not to raise the potential point. 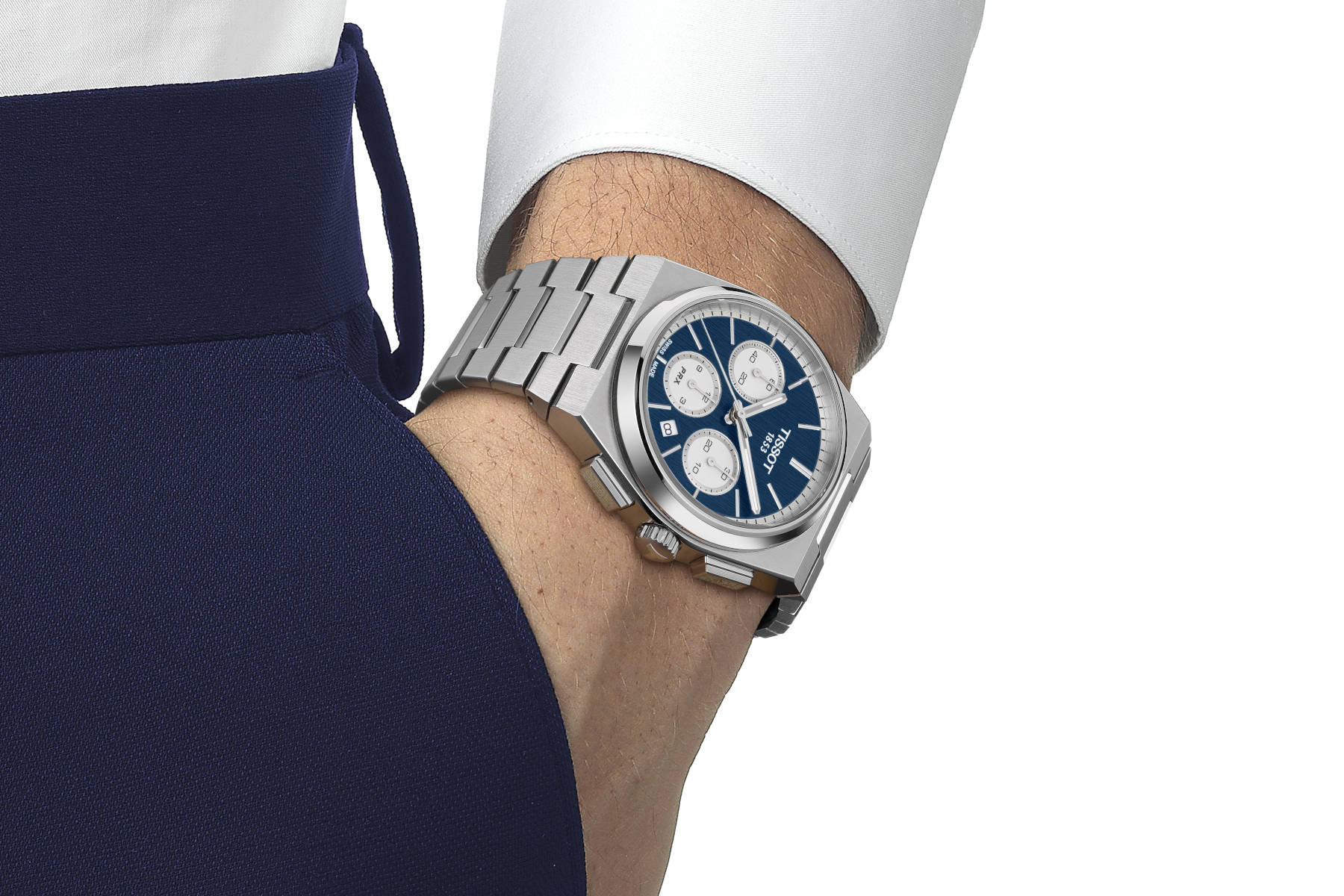 Tissot offers the new PRX in two color options. Both are similar combinations to those we saw on the previous time-and-date models, but the chronograph sub-dials allow for a little more flair. The first is a dark, muted blue. The dial has a subtle vertical brushed finish which I am a fan of. I also like the contrast of the white sub-dial counters, but I particularly like the silver tracks encircling them. They inject a little more character into the dial and match the same silver minute track around the dial’s periphery. The steel hands and applied hour markers are simple and modern, with Super-LumiNova for low-light legibility. The date window cutout at four-thirty is the only thing I don’t love. For date windows not at 6 or 3 o’clock, I prefer the date discs to be color-matched to the dial.

So, thankfully the white-dialed “Panda” chronograph offers everything I liked about the blue-dialed model and a little more. While I genuinely like them both, the Panda is my favorite of the two. The white dial has the same vertical brushed finish as the blue-dialed model. It’s hard not to love the Panda concept here. However, it’s the gold-colored, applied hour markers and hands that elevate this from being “just another Panda chronograph,” so something much better. The fact that the date disc matches the white dial is just the icing on the cake. 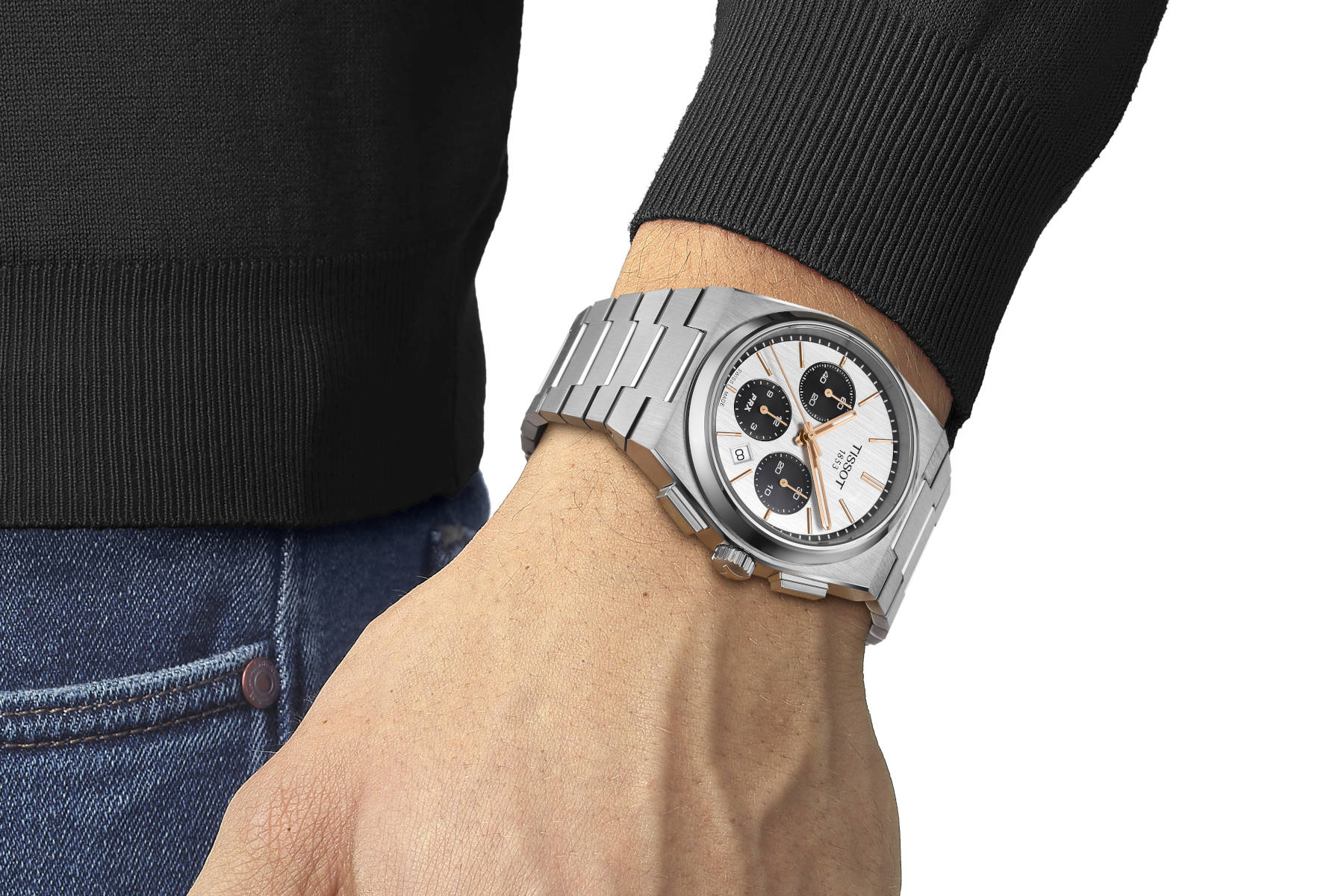 In all, the Tissot PRX Chronograph is a welcome addition to the PRX line, which has already formed an anchor of the Tissot collection since its rebirth not long ago. I am pretty confident that the Tissot PRX Chronograph will be as successful as its siblings, thanks to a mix of good looks and accessible pricing for a mechanical chronograph. It certainly seems to have struck a chord within the Fratello team. RJ is already champing at the bit to order the white-dialed model for himself. I feel he may not be the only one!

The Tissot PRX Chronograph is not limited and will cost €1,495. If you’re on the fence about adding one to your collection, you have a little bit of time. They will be available on the Tissot website from June 2022.

Hot Topics
Introducing: The Omega Speedmaster Super Racing With Spirate System
165 comments
Design Vs. Specs — Which Is More Important To You When Buying A Watch?
87 comments
New Release: The Limited-Edition Seiko Prospex SLA067J1 Diver
59 comments
My Predictions For New Omega Speedmasters In 2023
57 comments
The Time To Buy Is Now: How The Current Economic Climate Influences Watch Buying And How You Should React
51 comments
Popular
Top 10 Rolex Watches – Overview of Models Favoured By Our Readers
Fratello
25
Rolex Submariner – Historical Overview Of A Diving Legend
Robert-Jan Broer
22
#TBT A Vintage Seiko Buyer’s Guide to Affordable Goodness
Michael Stockton
32