It took me several years to fall in love with vintage Rolex GMT Master reference 1675. I had ignored it so long, that I ended up paying for it. Literally. As both vintage or modern Rolex GMT Masters aren‘t cheap, I’ve decided to put together a shortlist of my Top 5 alternative Pepsi bezels for you. If you want to thank me, I will accept payment in soda form…

Let’s see which one wins the Fratelli’s heart. To shake it up a bit, we decided to mix together a few modern and few vintage models. And we do not stick with divers’ watches only, you will find also some day-dates, GMTs, chronograph, and even a quartz watch. Let’s get to it. 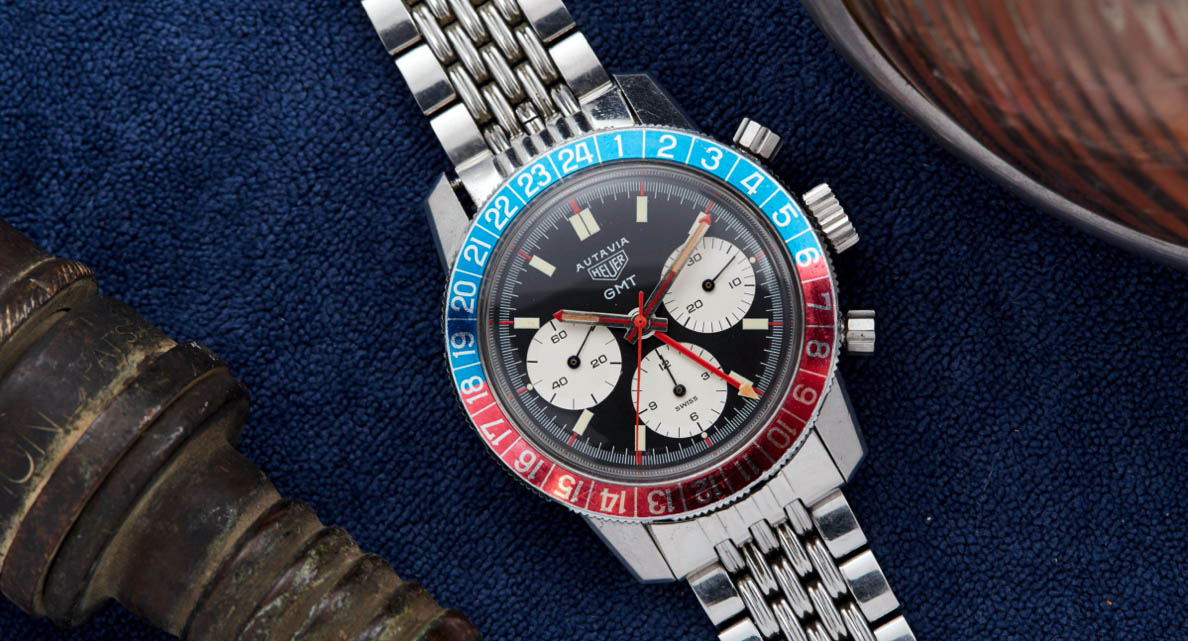 A few years ago my internet was exploding here and there with Heuer hype. If you didn’t have an Autavia, you were not a good enough collector. I am exaggerating a bit, but you get my point. With water calming down in Heuer Bay, now might be the time to search for a nice Heuer Autavia to add to your collection.

Heuer introduced the Autavia chronograph wristwatch in 1962. It is a very famous family, but have you ever considered the Heuer Autavia GMT that debuted five years into the collection’s run in 1967? The iconic chronograph dial comes alive thanks to the “flashes” of dark red on the hands and indexes. Just a few splashes of color makes for a remarkably different visage, don’t you think? It reminds me of the Speedy Tuesday Ultraman, with its strong attitude and individualistic appearance.

The Heuer Autavia GMT is powered by indestructible chronograph workhorse Valjoux 72c, with an extra hand to show the extra time zone. All 24 numbers written tightly next to each other in a beautiful old school font — that’s something you won’t get with contemporary ceramic bezels. While the bezel takes you a few decades back with every single look at it, the 40mm diameter keeps things relevant for a more modern-minded audience. 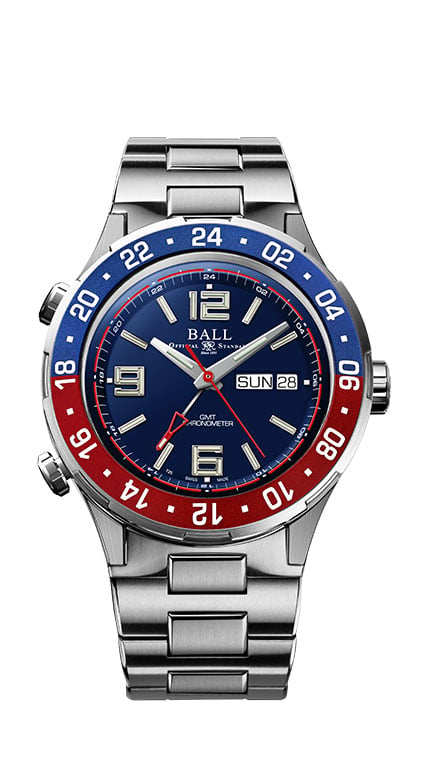 This thing looks to be the steroid-fueled result of a romance between a Rolex GMT master and a G-Shock. That’s probably why I love it. And that’s in spite of the fact, I have never had an eye for “muscle“ watches. We asked for a sample the moment Ball introduced Roadmaster Marine GMT last year, but Ball didn‘t care enough to send us one.

Still, I believe it’s an interesting watch. What surprised me the most is the diameter. I expected much more than 40mm, which makes it wearable even for me. It’s sporty and elegant at the same time. Like other Ball watches, the Roadmaster Marine GMT uses 28 tritium tubes to bring it’s “ever-glow” feature to the dial. Tritium tubes achieve their glow through a constantly occurring chemical reaction and don’t need to be energized by sunlight.

So what does €2,500 buy you in this case? Firstly, this watch is limited to 1,000 pieces. Additionally, the day-date automatic Ball Roadmaster Marine GMT is chronometer-certified. Surprised? If that‘s not enough, take into account the ceramic bezel paired with the titanium case. The GMT hand can be independently set via multiple push buttons on the left-hand side of the case. That’s pretty unusual. It’s also pretty cool. Let’s hope Ball sends a sample so we can bring you full hands-on review. 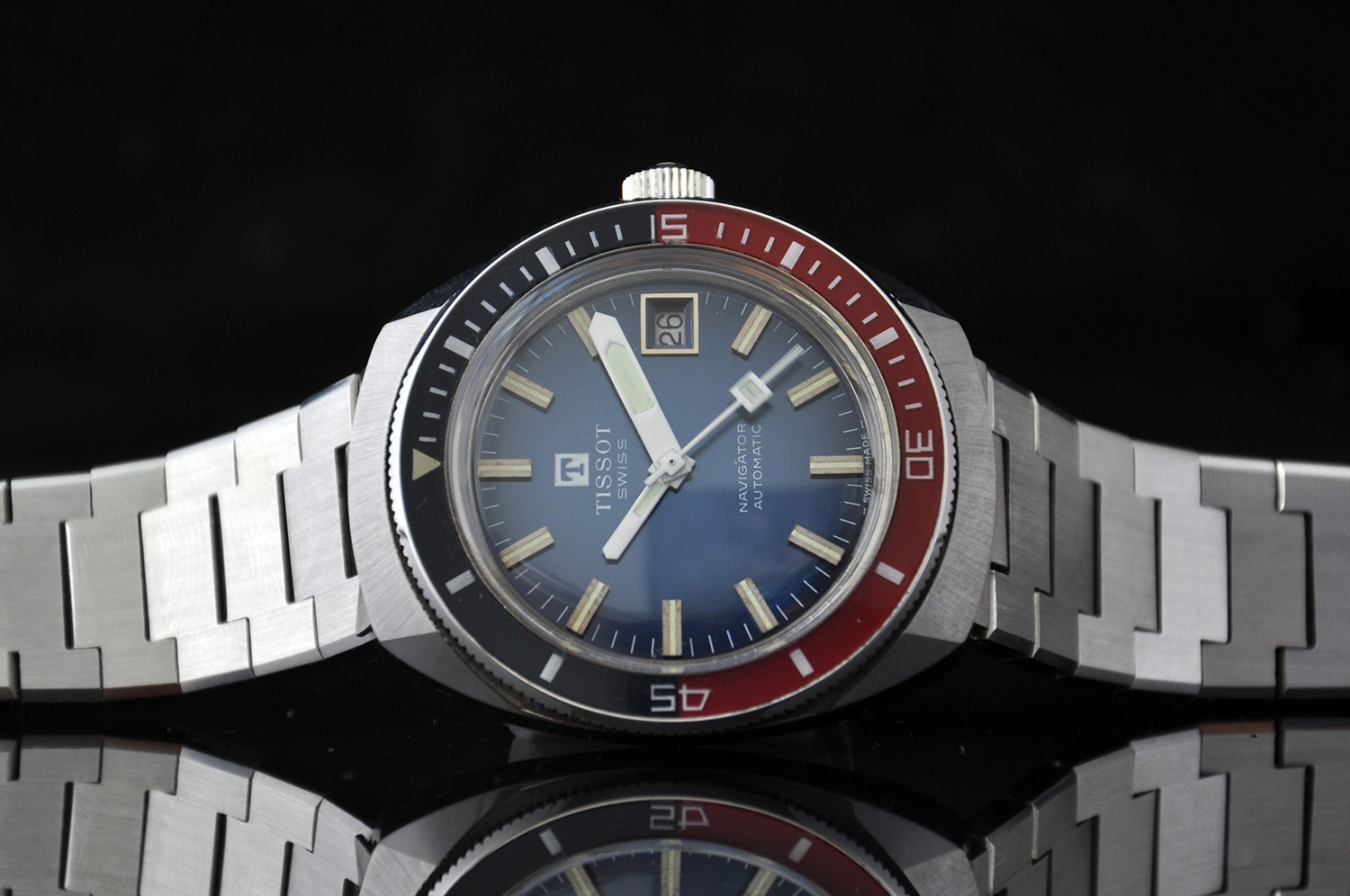 If I had to choose one and only Pepsi bezel watch on this list, this model would be my choice. Without a second thought. As a vintage watch nerd, I prefer watches born earlier than me. Tissot Navigator Automatic ref. 44940 comes from the 1970s and I bet many of you have never seen it before.

…you can’t unsee a bit of Breitling SuperOcean in it.

The case style is very 1970’s and, next to that cool bracelet design, looks quite premium. A 38mm diameter lands this beauty in the sweet spot of many torn between the new and the old. And okay, the bezel may well be black and red, but a deep blue dial makes it enough Pepsi. And look at the hands! The minute hand is double the size of the hour hand and looks pretty massive. In combination with the seconds hand, you can’t unsee a bit of Breitling SuperOcean in it. 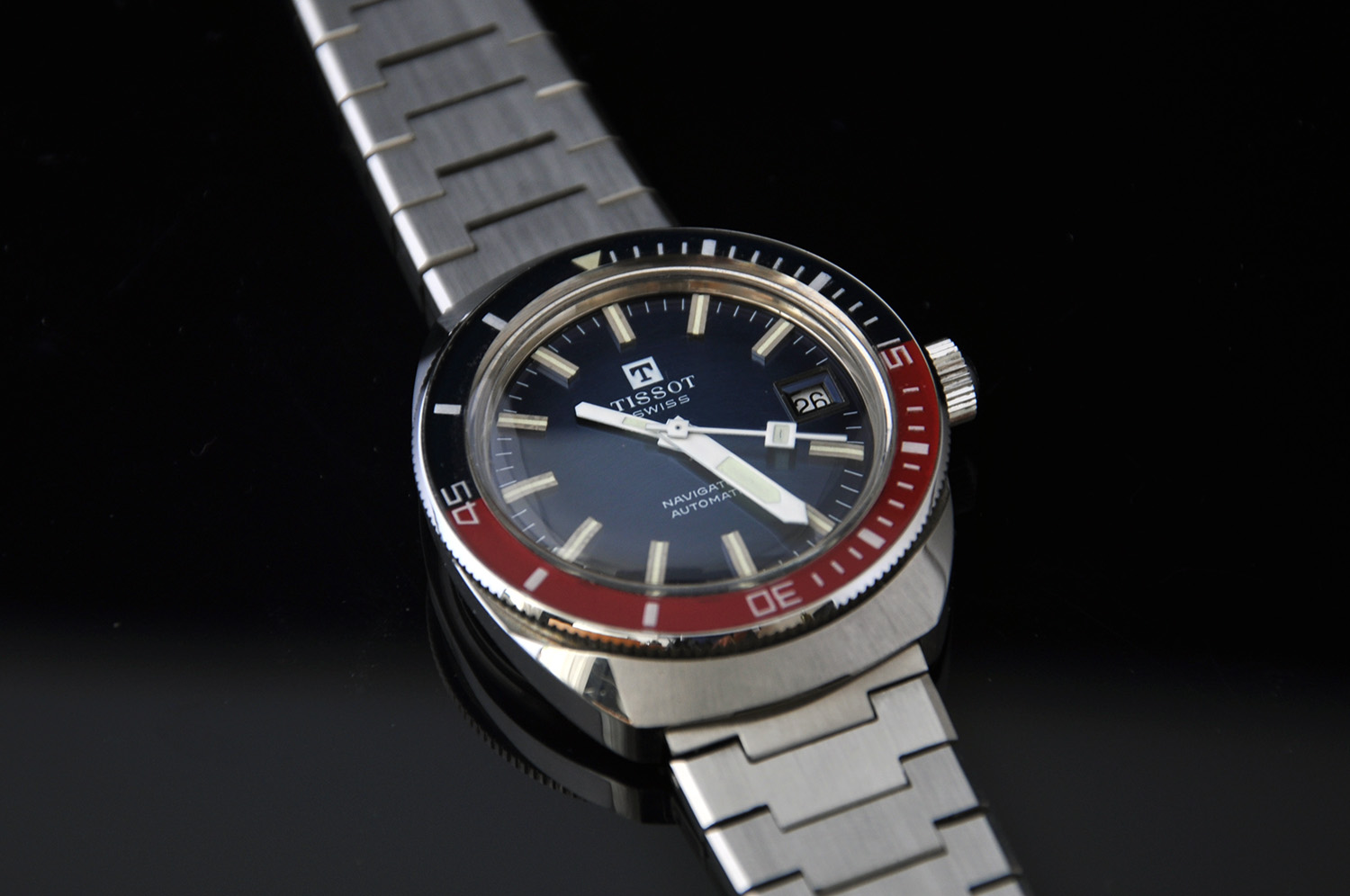 We could call the dial mediocre or even boring, but I don’t mind. The thing is that the thin geometrical numbers on bezel contrast with chunky hands so much, that I am sure I would never get bored of it. This is a very un-Tissot watch and that’s what makes it interesting. The Navigator Automatic powered by Tissot caliber 2481 is equal to the Omega cal. 1481, and it has been on my list for quite some time. Unfortunately, they don’t surface often. If you see it, grab it! Either that or poke me. 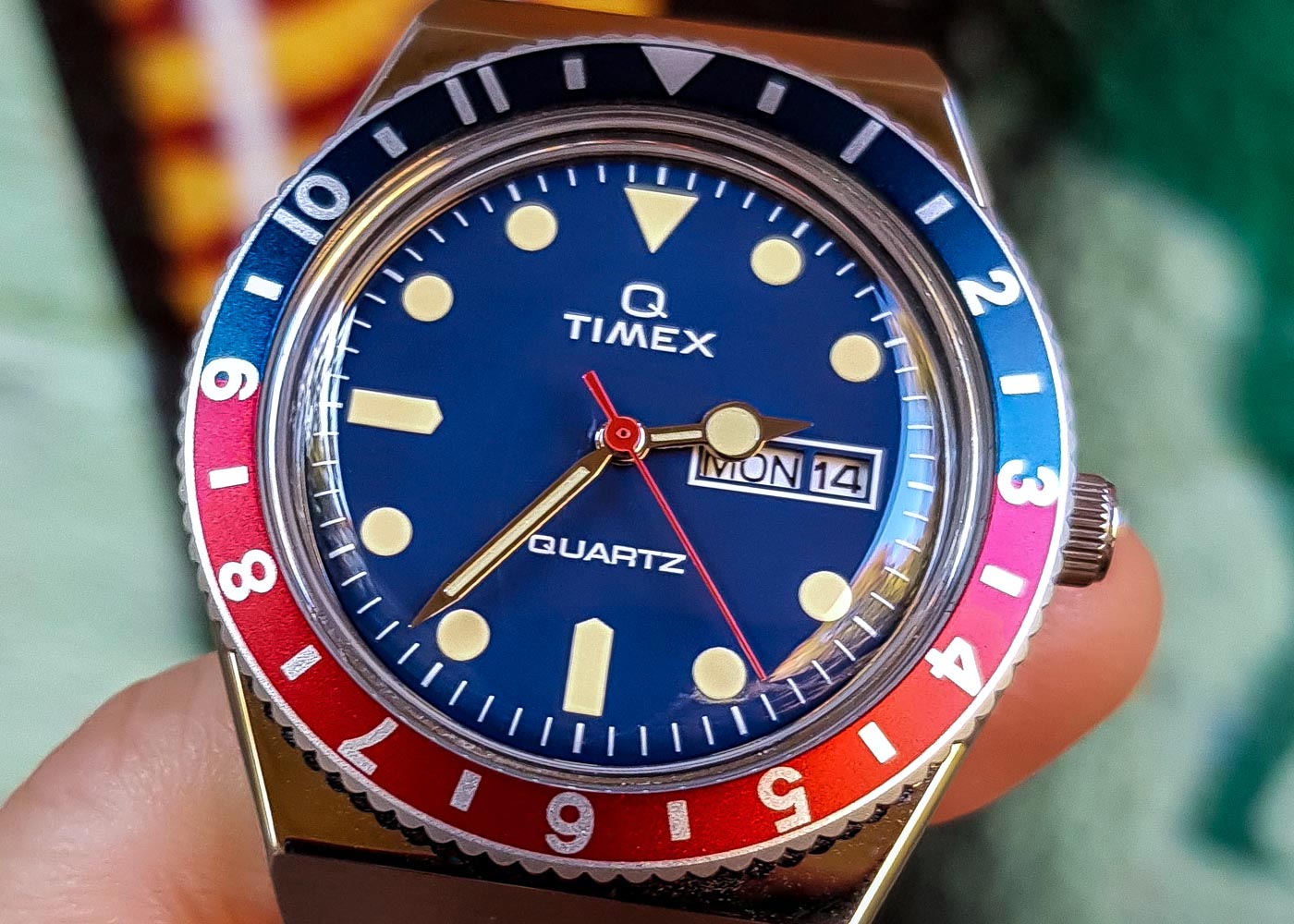 Rob introduced it as a killer quartz watch in his hands-on review. Q Timex 1979 is now available in few other colorful dials/bezel variations, but I agree with Rob that Pepsi is the one to choose. It has been almost half a year since I wrote an article on the release of the Q Timex 1979 and M79. I still love the watch as much today as I did back then.

The $179  price tag is nothing but attractive. You get a very 1970s case with hidden lugs and 38mm diameter. You should hate the strong resemblance to Rolex GMT, but that’s the point. This Timex reinterpretation is amusingly cute. Its whimsical character is very cleverly underlined by the Comic-book-style of press communication. Scrolling through Rob’s picture I see again acrylic domed crystal, functional battery hatch from original Q Timex, and a “micro-jubilee“ bracelet. And I feel so guilty I didn’t buy it… 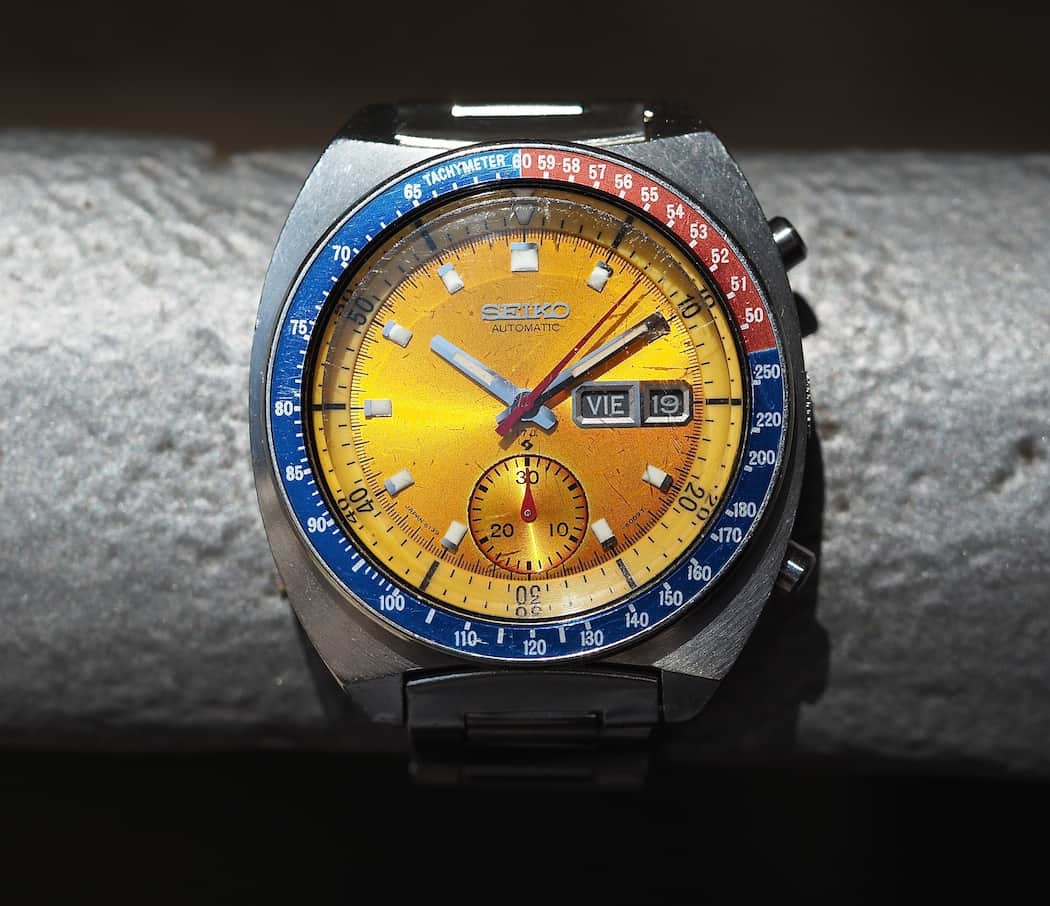 Someone might complain that this half-Pepsi bezel that’s doesn’t even rotate made it onto the list. The reason is simple. “The 6139 was Seiko’s initial foray into the automatic chronograph game and actually debuted in 1969 alongside the Zenith El Primero and the multi-branded Caliber 11,“ writes Mike in his extensive deep dive into 6139 Pogue. NASA selected USAF pilot Colonel William Pogue in 1966 as one of the original astronauts for the Apollo Program. Thanks to Colonel Pogue and his 1973/1974 Skylab 4mission, Seiko 6139 became the first automatic chronograph in space.

When you say gold, I see Pogue.

There are many Seiko watches that can fascinate you with their wild designs. Even among such competition, the Pogue stands out big time. It is a true chronograph in a classy case but has bags and bags of fresh charisma. The blue and red tachymeter bezel contrasts sublimely with the shiny yellow sunburst dial. While most collectors see yellow, I see gold. When you say gold, I see Pogue. 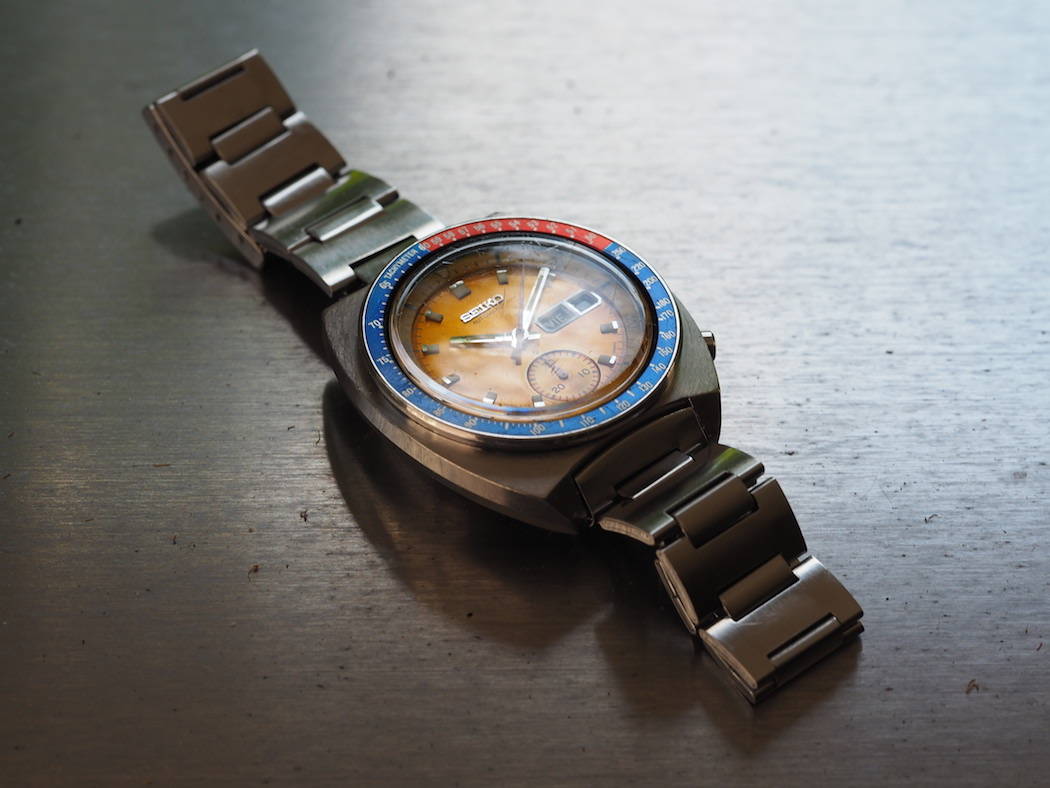 I have to admit — and that’s not my experience only — the Seiko Pogue isn‘t the usual candidate for love at first sight. But, as in life, we know that the best relationships don’t always come from instant burning passion. The Pogue is quite robust and it has a Hardlex mineral glass crystal instead of acrylic. I cannot imagine wearing it on rubber or leather, so if you’re after one, make sure it comes with a decent H-link bracelet. You still can get it for a reasonable price — normally they pop up under $1,000.

If your tastebuds still crave for something else, we have a few more tips for you. “Modern” guys might enjoy the look of the Tudor Black Bay GMT Pepsi Bezel or Yema Superman Heritage. Both have refreshing styles. If you’re looking for something dressier, the C65 Trident GMT from Chris Ward doesn’t look bad either. Vintage heads should not overlook Zodiac Aerospace GMT or a big fat Citizen 8200. And don’t forget to vote for your favorite for today’s line-up of 5 Pepsi contenders.