Dive watches are immensely popular amongst watch aficionados. However, most of them are never used for the task for which they’re designed. I’ve been diving for quite some years now. As such, I’ve always worn a dive watch from my collection alongside my trusty dive computer. Here are five watches that I actually used while diving.

Often people are afraid to use their watches in or underwater. The fact is that the meters indicated on a watch do not correspond to the actual depth you can take it underwater. I can imagine that that leaves you a bit puzzled about the actual depth the watch is suitable for. All kinds of rules circulate the Internet, but in general, a watch rated 200 meters waterproof, is suitable for scuba diving. Recreational divers rarely go deeper than the 30-meter mark. Only technical divers might make it to minus 40-meter and more. Anyhow, way more important than the depth rating of your watch is the condition of its gaskets. A watch used for scuba diving should have been pressure tested not more than a year before you take it out diving.

Some pictures in this article are from a time long gone, take on the mediocre underwater cameras of that time. That’s why some of the images in this article might not be up to our usual standards. I hope you don’t mind too much. Here’s my list of five watches I’ve actually used during diving. 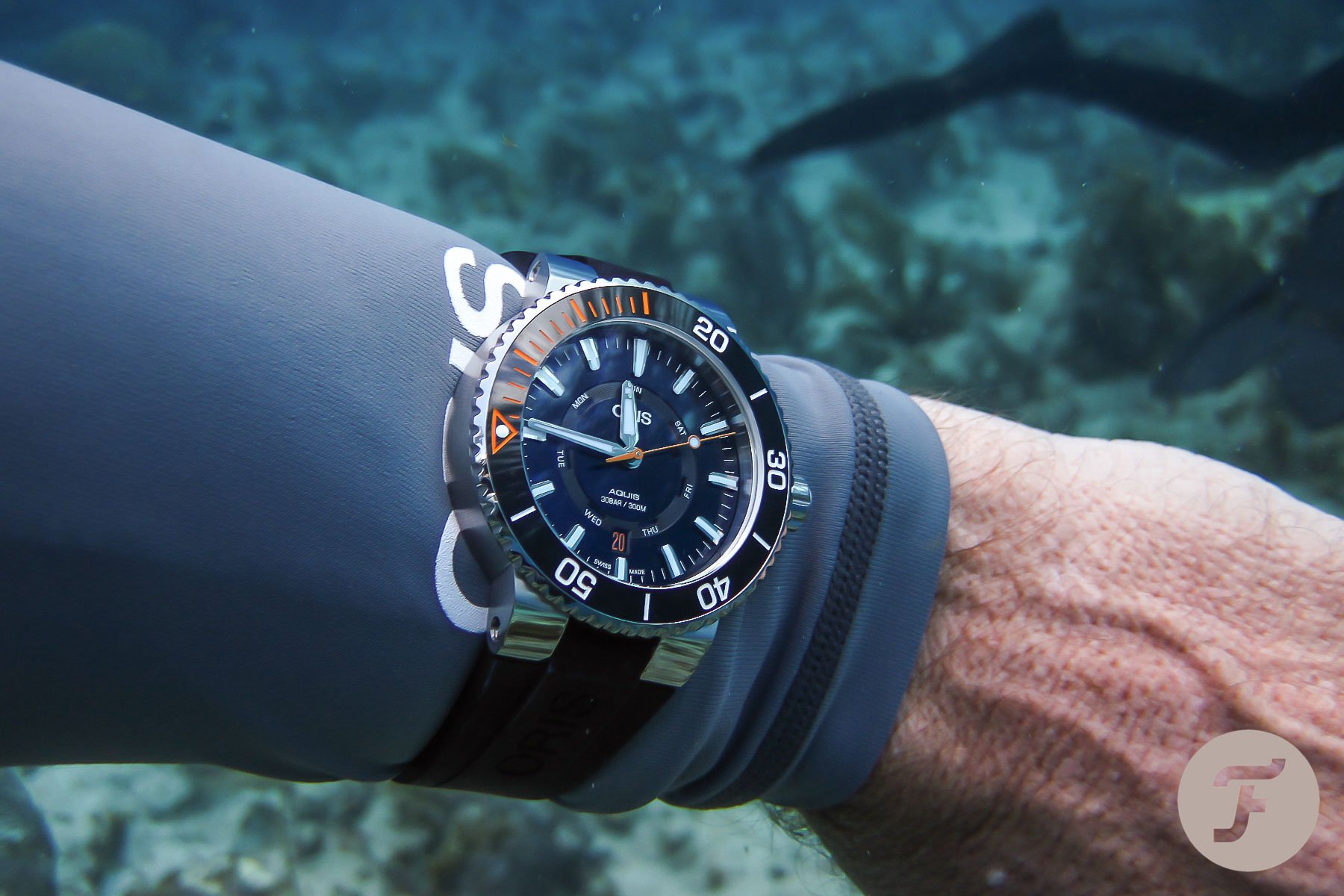 One of my most impressive dive experiences was a dive trip with Oris and the Coral Restoration Foundation (CRF). Just south of Key Largo (FL), the CRF grows coral to restore the dramatically declined coral population on the Florida Keys reefs. Oris has quite a tradition contributing to marine-life saving projects and ocean conservation. The Oris Aquis Staghorn Restoration LE was the first model to support CRF activities. We’ve just seen the Carysfort Reef LE released in June, continuing this good work. 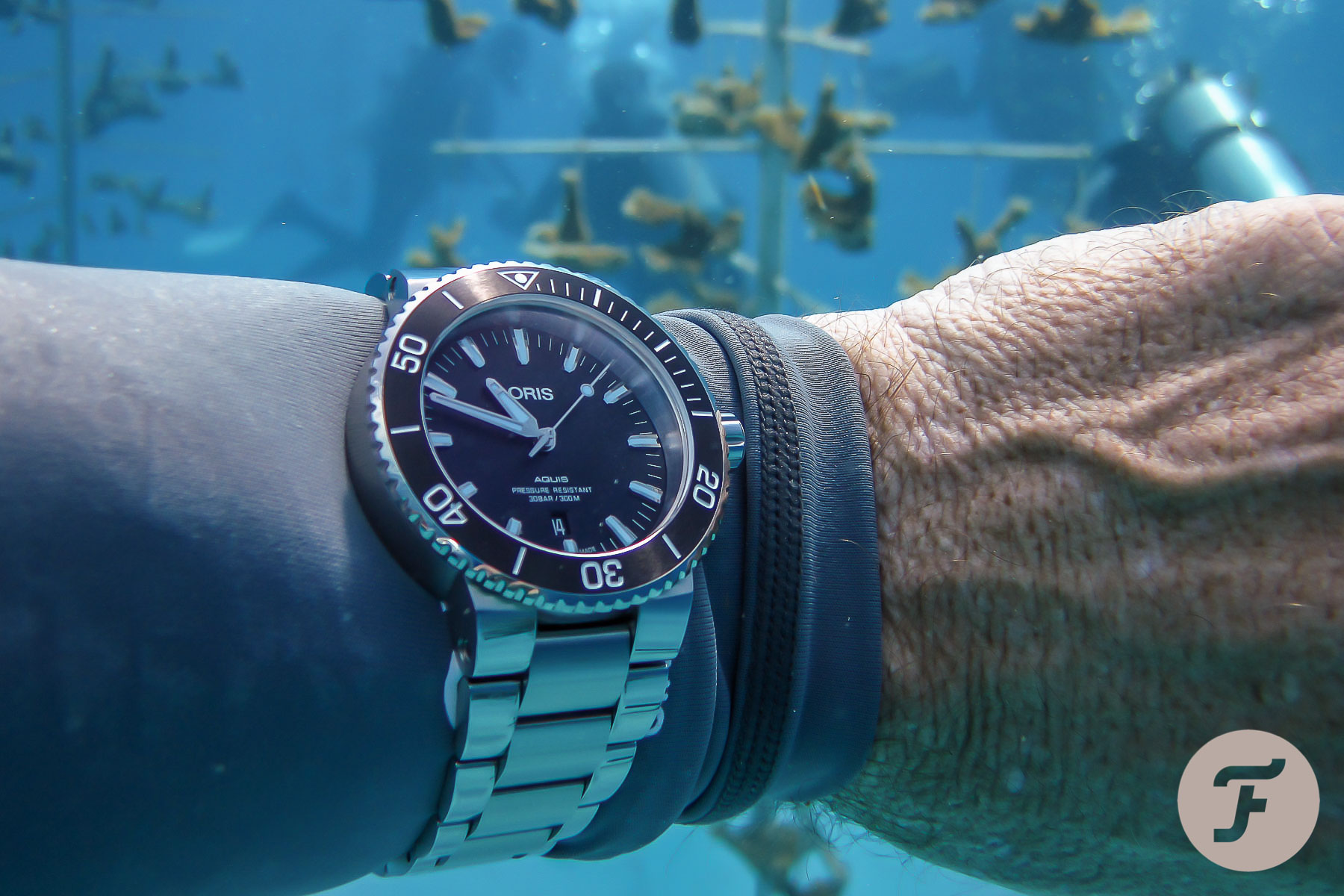 Introduced around ten years ago, the Aquis is Oris’s modern diver. I like that it’s not just another Rolex Submariner copy, but very much has its own appearance. Besides that, it’s a comfortable daily wearer and is very suitable as a watch for actual diving. During the mentioned dive south of the Florida Keys, I was able to use and try two Aquis models, the regular version and the Staghorn LE.

…it lacks a bit of color contrast

For diving purposes, the regular Aquis lacks a bit of color contrast. From behind a damp goggles glass, it’s not always easy to determine the minute from the hour hand. The Staghorn version has at least a colored first part of the minute scale, which makes it easier to identify where to look. 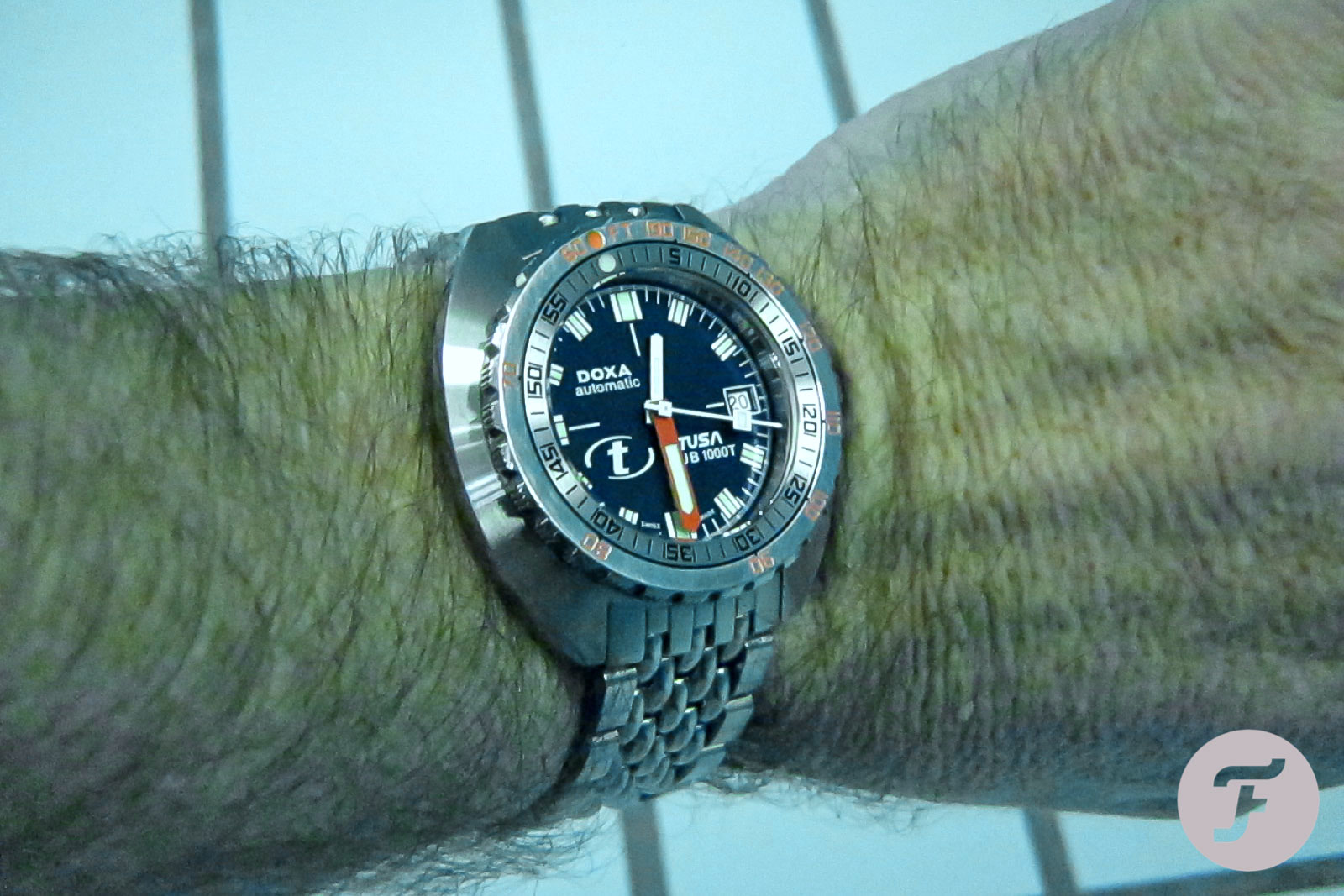 The Doxa SUB 1000T TUSA LE was the watch I used during my dive training. The first few classes were held in a 5-meters deep pool, where the above picture is made. The watch is a limited edition to commemorate the first 30 years that TUSA was present on the US market. Well, to introduce a LE you can celebrate anything, can’t you? Only 100 pieces were made. I heard that 50 were presented to TUSA staff, and 50 were sold to the general public.

My first Doxa SUB 1000T TUSA LE, as above pictured, was number #44/100. Later, after some diving with it, which caused some damage, I was able to change it for a brand new one, which has #88/100. Of course, I still have that one in my watch collection. The uni-directional diving bezel of the Doxa does not only indicate minutes. It shows the rule of thumb no-decompression limits (NDL) as well. In straightforward terms, NDL is the amount of time you can spend underwater at a certain depth without having to pause during your ascent. If you stay past that limit, you’ll have to take the extra measures to avoid decompression illness.

The orange minute-hand of the Doxa SUB 1000T TUSA is easy to see while underwater. The minute scale isn’t. Its numbers are relatively small, and there’s no precise determination – like a color difference or different type of scale – for the first 15 or 20 minutes. While a depth rating of 200 or 300 meters is considered as adequate for a dive watch, this Doxa is rated to even 1,000 meters or 100 bar. 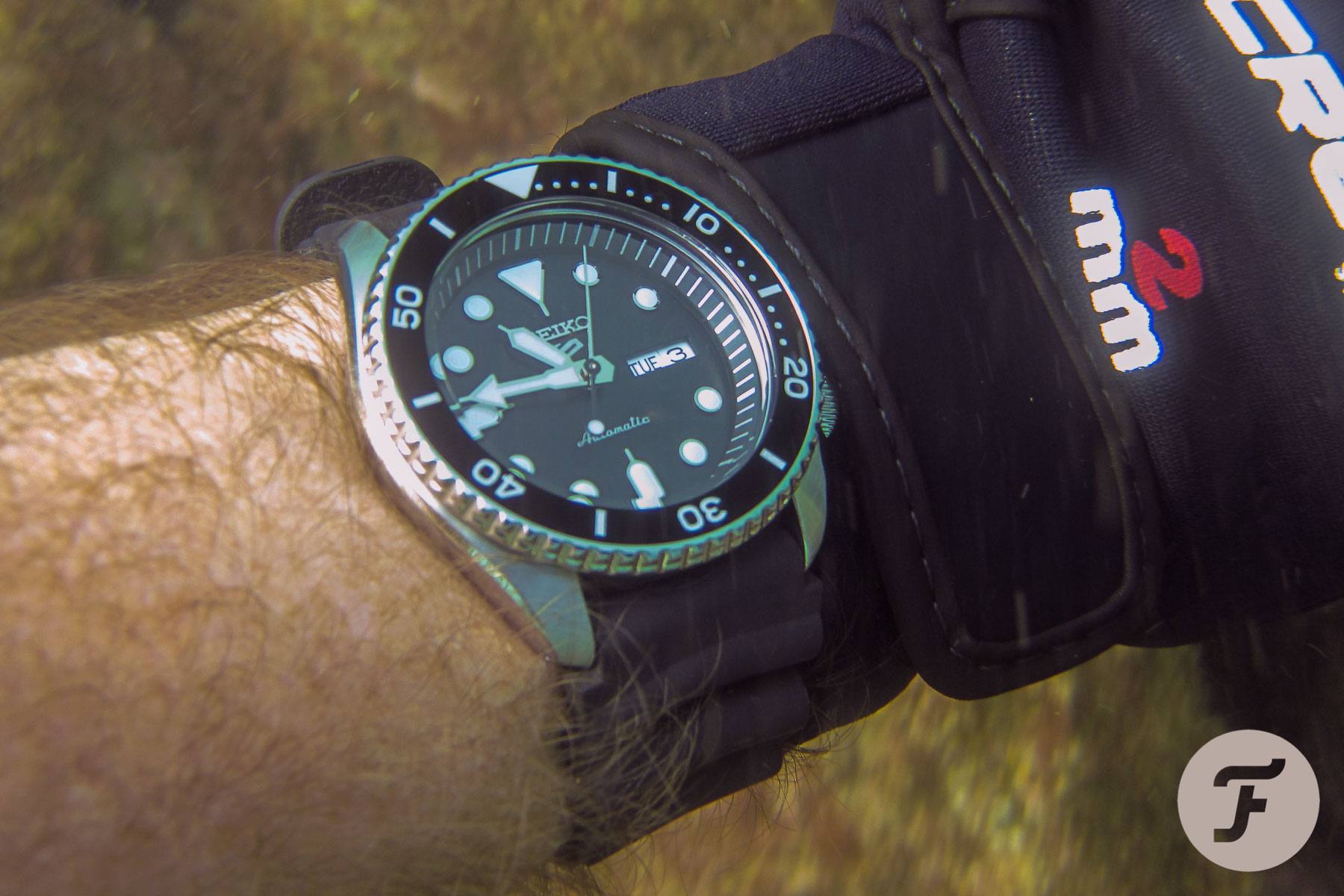 The third watch on this list is a bit of a provocative choice. When Seiko withdrew the SKX divers series from its program, the new Seiko 5 Sports series was introduced. That might have been unfortunate timing, as the new Sports 5 was taken as a successor to the SKX. This caused understandable disappointment, however, as the 5 Sports weren’t created for diving. Its specs fell below the expected standard. A depth rating of 100 meters isn’t considered on par for real divers’ watches. To silence the negative voices, I thought it would be an excellent idea to use one of the newly introduced 5 Sports during diving. 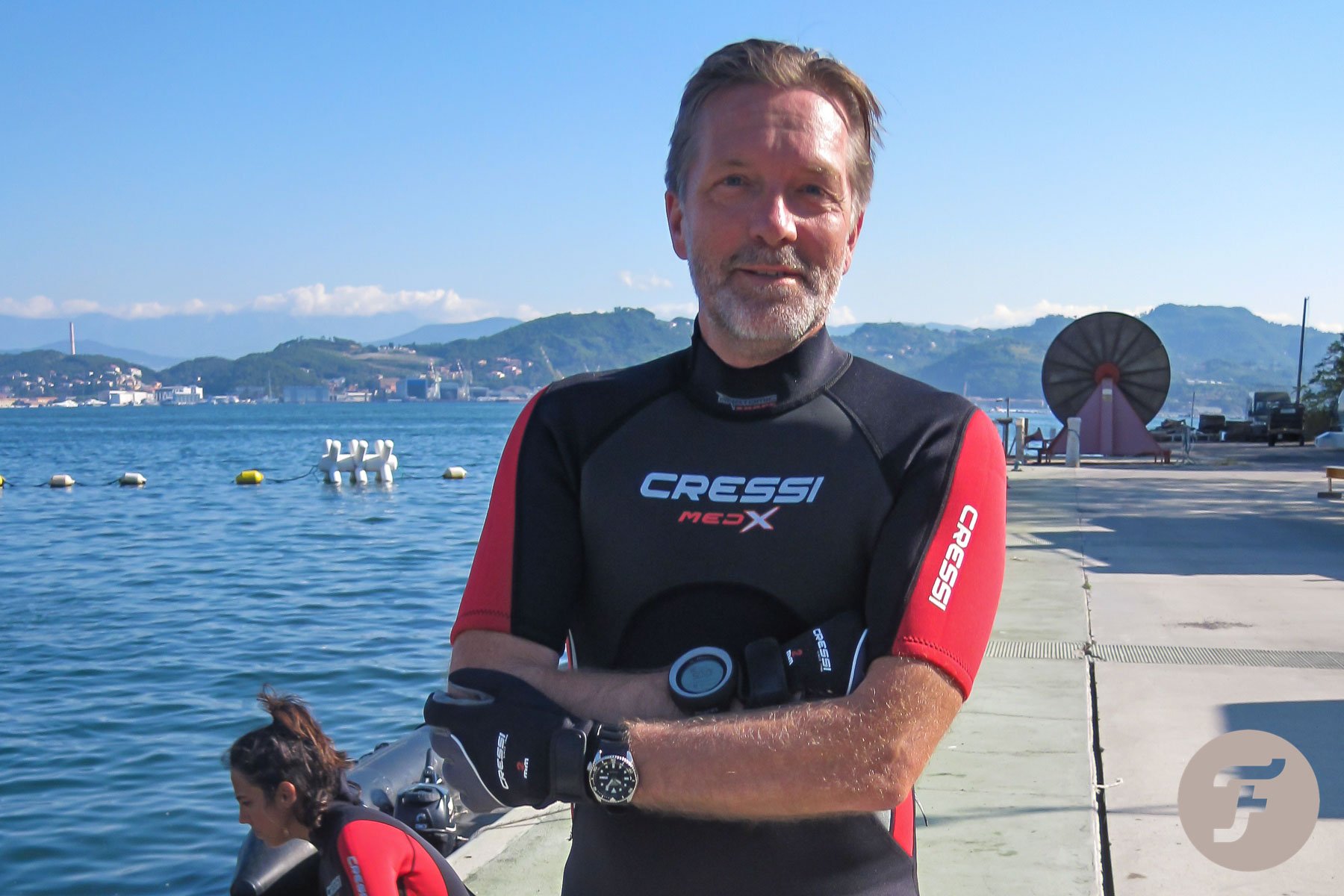 Of course, it withheld perfectly. Although I have to admit it wasn’t a very deep dive. The all-black (SRPD55) version I used is easily readable underwater. The minute hand differs enough from the hour hand to determine the two. And the first 20-minutes of the bezel is distinguished from the rest by a finer scale. All in all, entirely usable for scuba diving, although not rated as such, nor ISO 6425 certified. 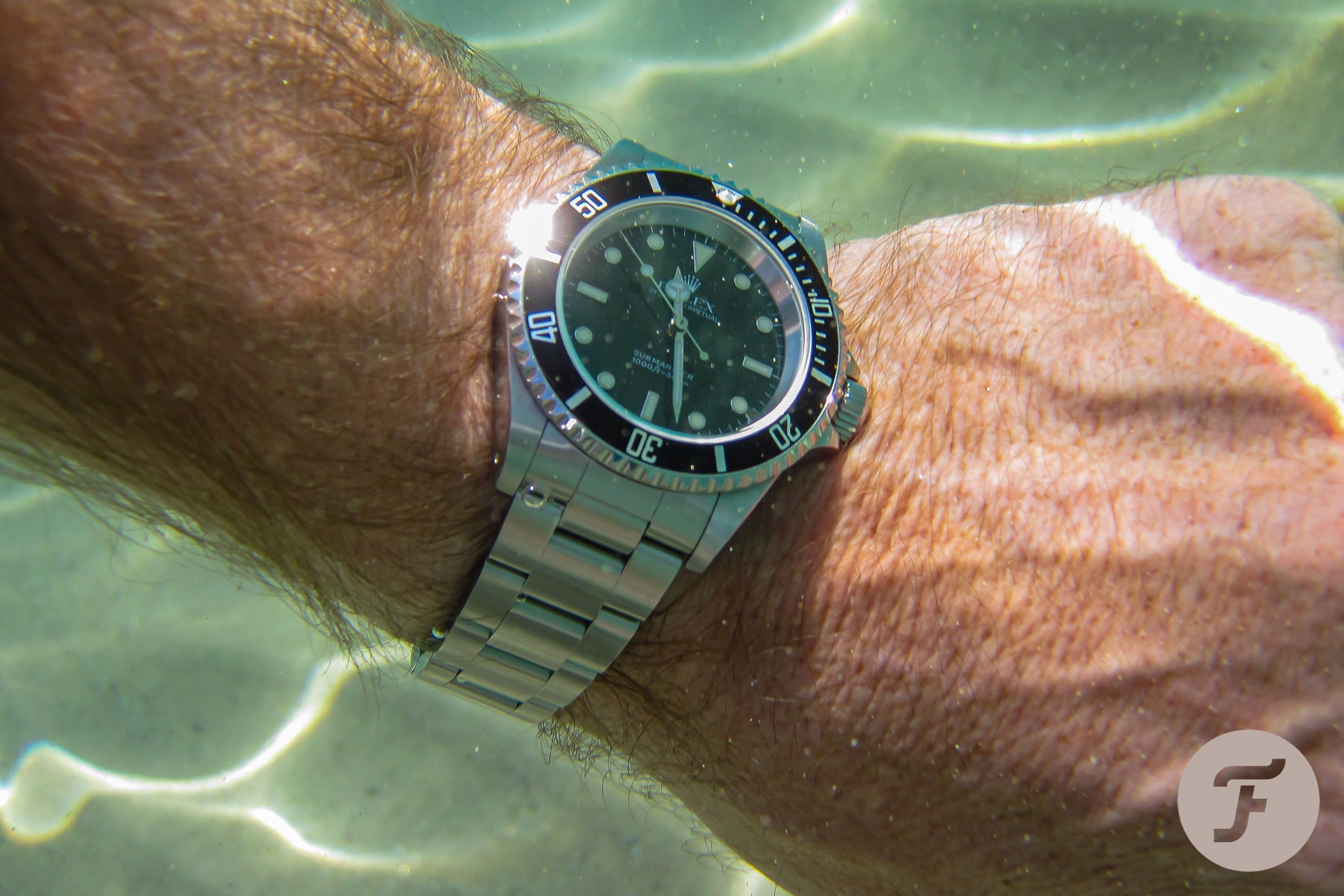 For the rest, I don’t think that a Submariner does its job any better than another dive watch. Sure, the Mercedes-type hour hand is distinct from the more important minute hand. And the first 15-minutes of the uni-directional bezel has a different, finer scale than the rest of the figures. By the way, I can’t remember where I took the above picture; it might have very well been during a regular swim in a shallow part of the Mediterranean. I did a more in-depth review of this 1992 Rolex Submariner, with reference 14060, here. 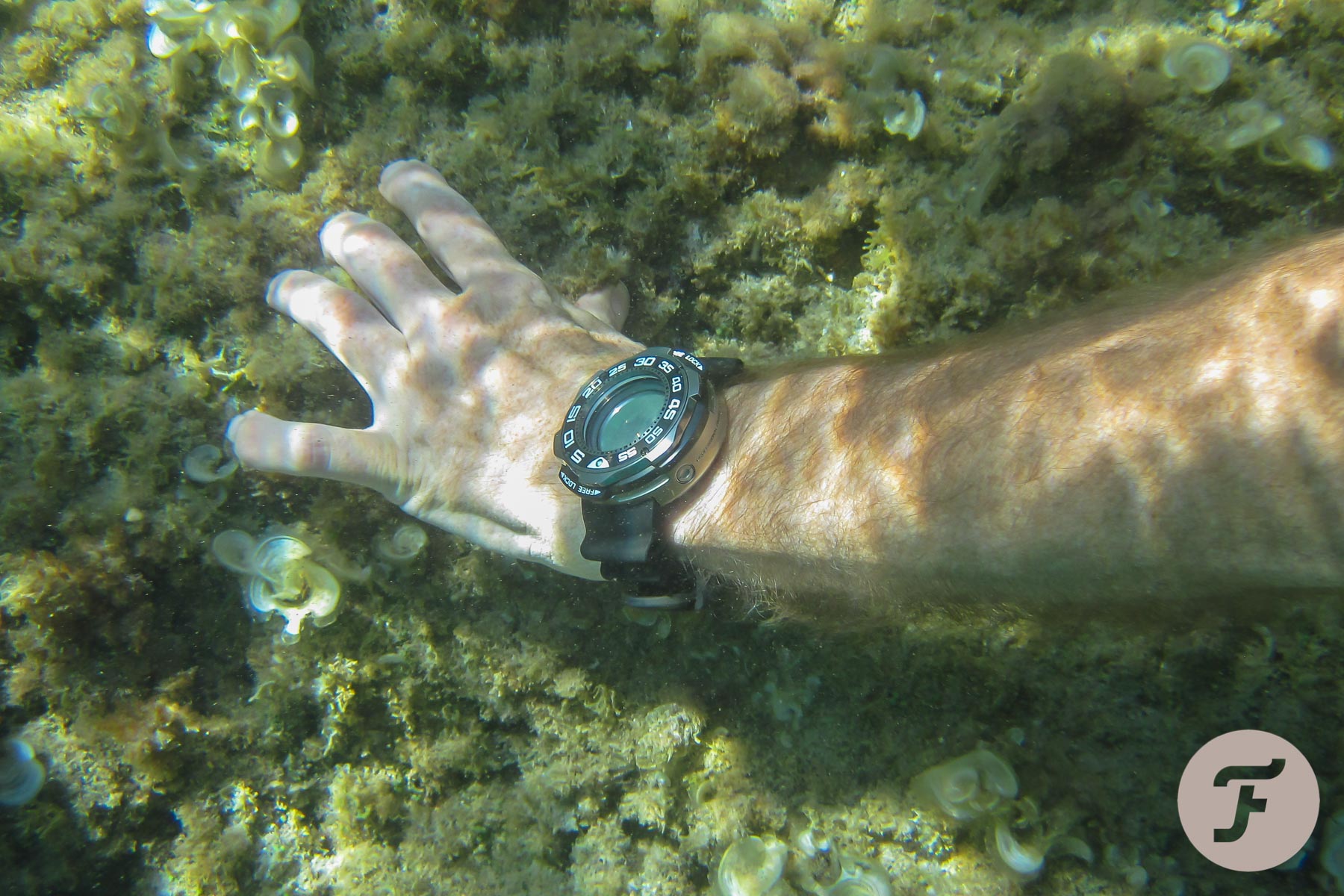 Last in this list, but certainly not least, is Citizen’s most professional creation in its extensive dive watch line-up. First, the Citizen Promaster Professional Diver’s 1000M Eco-Drive — in full — is a huge watch. It looks and feels like a serious instrument, exactly what Citizen had in mind. Although many other Citizen dive watches might have more diving-related functions (like a depth meter, decompression alarm, etc.), this one is made to withstand the physically harsh environments in which professional divers may find themselves. 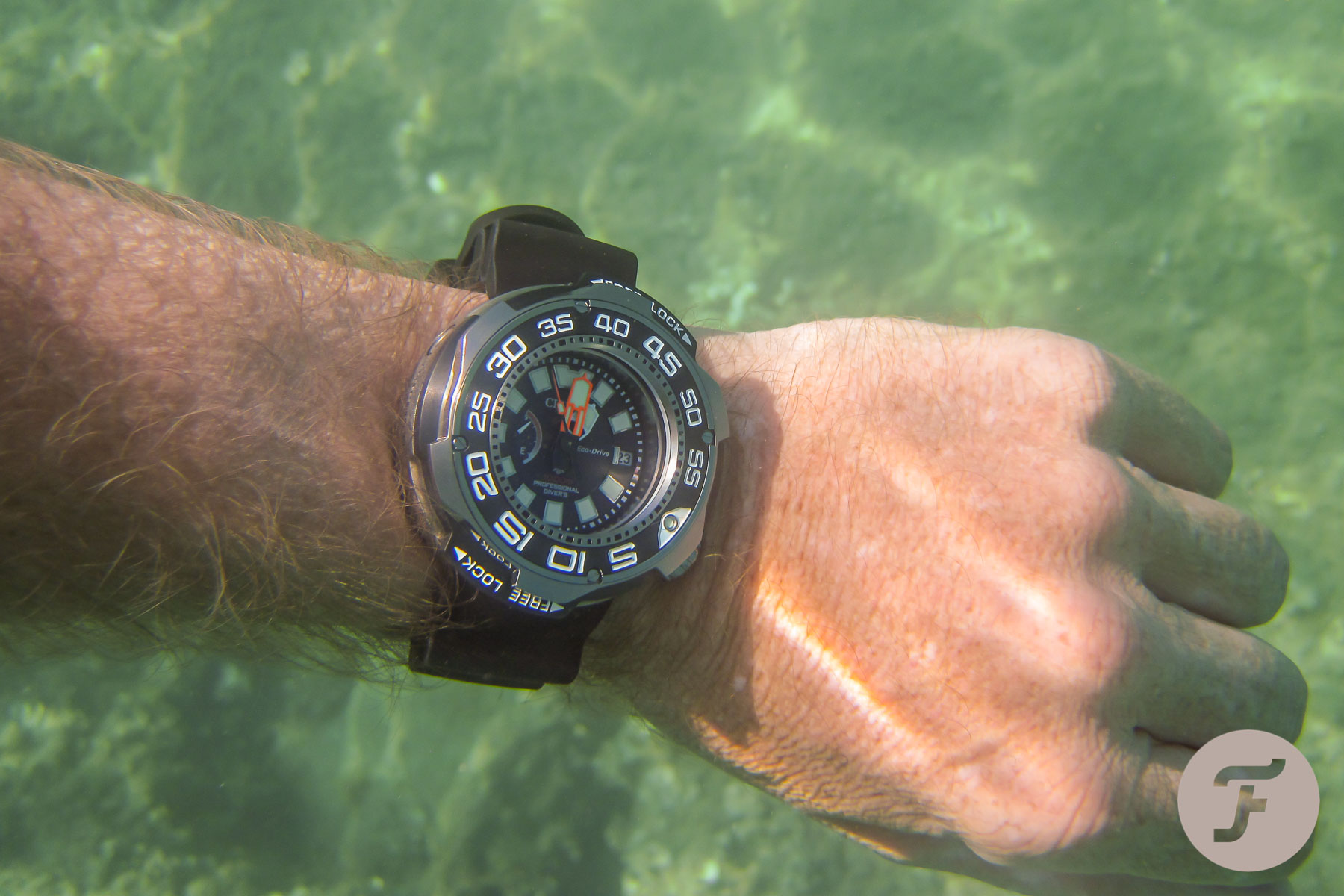 Its robustness is expressed by its 1,000-meter depth rating. Not only is it pressure-proof to 100 bar, but this watch is also suitable for saturation diving. The watch has a pressure equalization valve to release gas from the interior during saturation immersion to prevent damage.

Besides the impressive size of the Citizen Promaster Professional Diver’s 1000M, it’s technical appearance convinces. Strong, edgy lines. The almost aggressive but certainly powerful shape of the diver’s bezel. Bold, clear readable numerals on the bezel, in combination with a remarkable orange minute hand, make for an imposing piece in anyone’s collection.

If you’re a diver and – besides your dive computer – use a dive watch as well, please let us know in the comments below.

You find more of my watches on Instagram @gerardnijenbrinks