The Oris Staghorn Restoration Limited Edition has been introduced as a special model in Oris’ new Aquis line. Sales of this watch will support the Coral Restoration Foundation (CRF) in Key Largo, Florida. 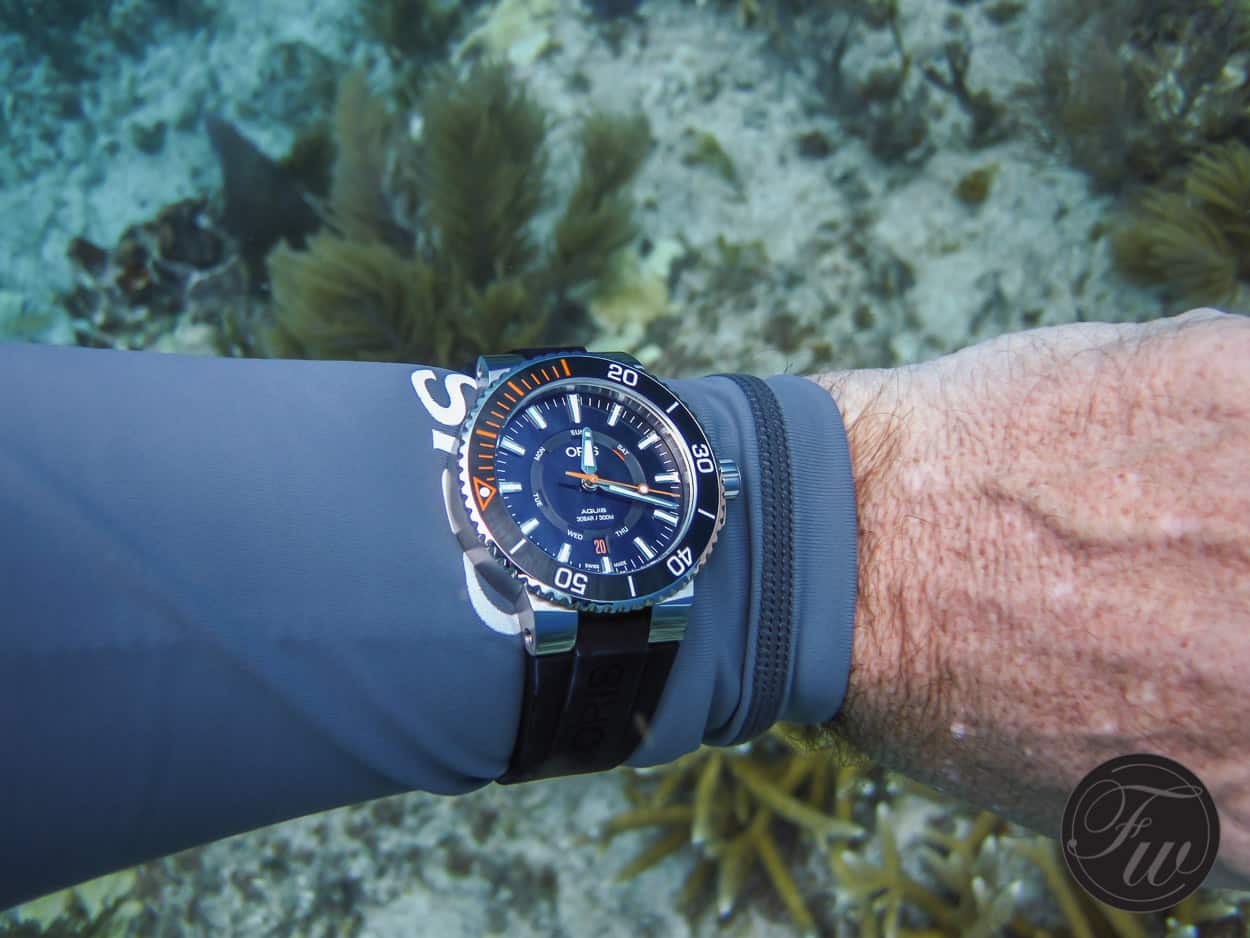 Oris has quite a tradition contributing to marine-life saving projects and ocean conservation. Since 2010, amongst other projects, they teamed up with projects in Australia, the Maldives and the Red Sea. For every project Oris introduced a special divers watch, from which part of it’s proceeds are donated to the belonging project. 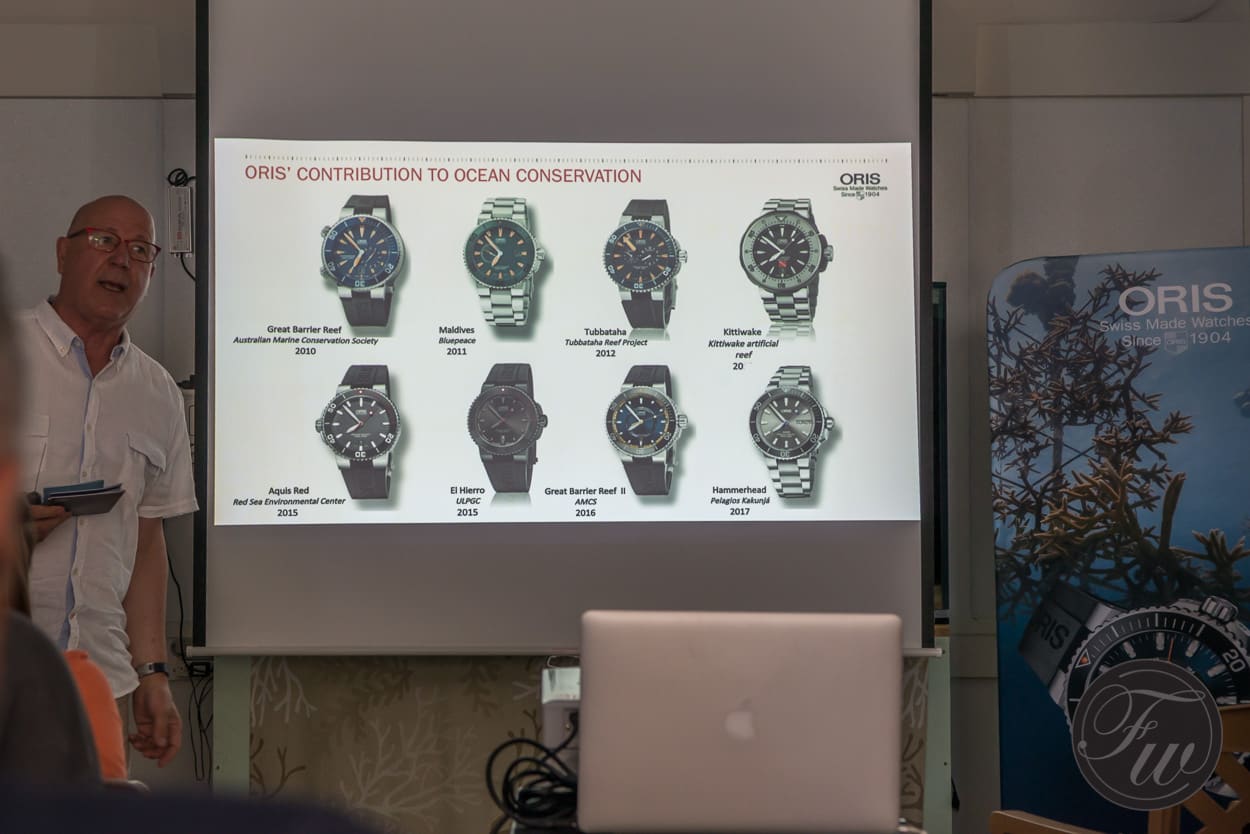 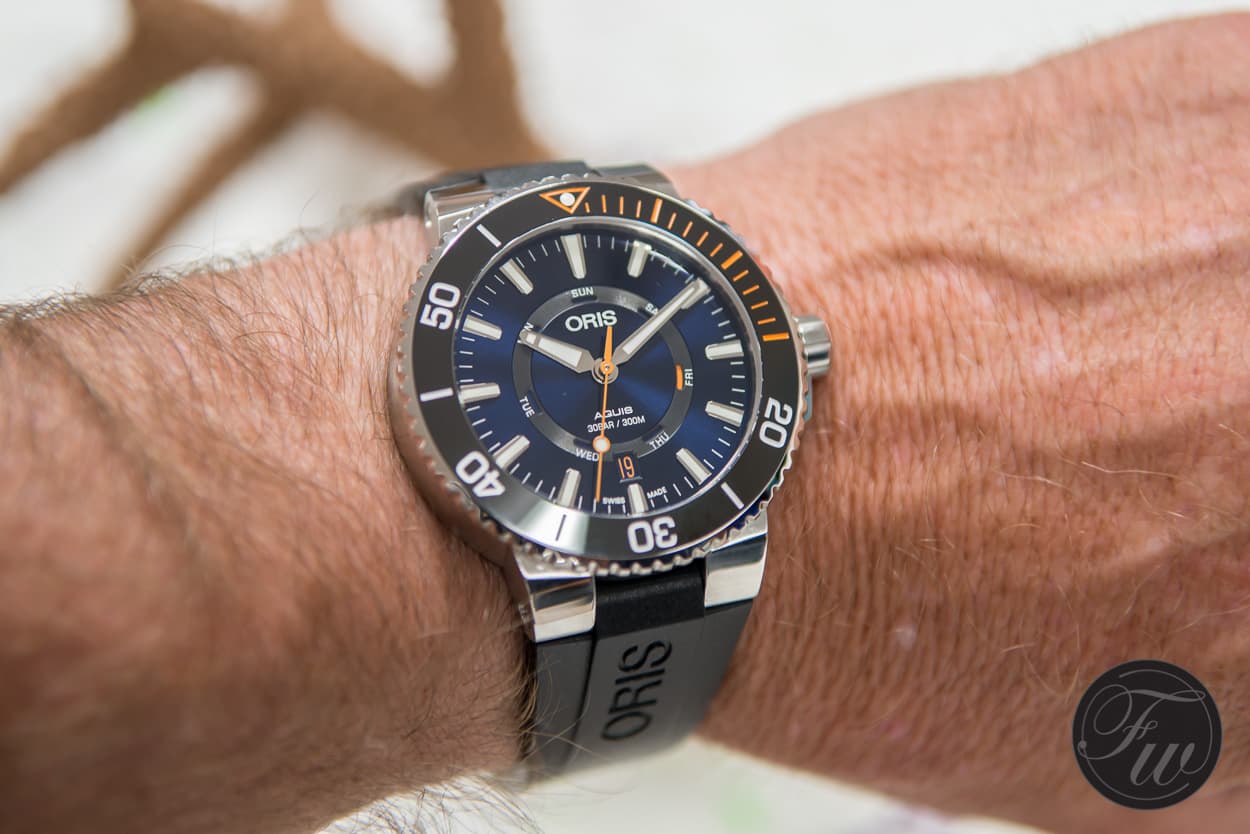 The introduction of the Oris Staghorn Restoration Limited Edition was done at, and in cooperation with, the Coral Restoration Foundation (CRF) in Key Largo, Florida. During this introduction there was as much attention for the work of the CRF as there was for the new watch. How much we love watches here at Fratello Watches, we’re in the opinion that ocean conservation is certainly as important. So let’s start with explaining the work of the CRF. 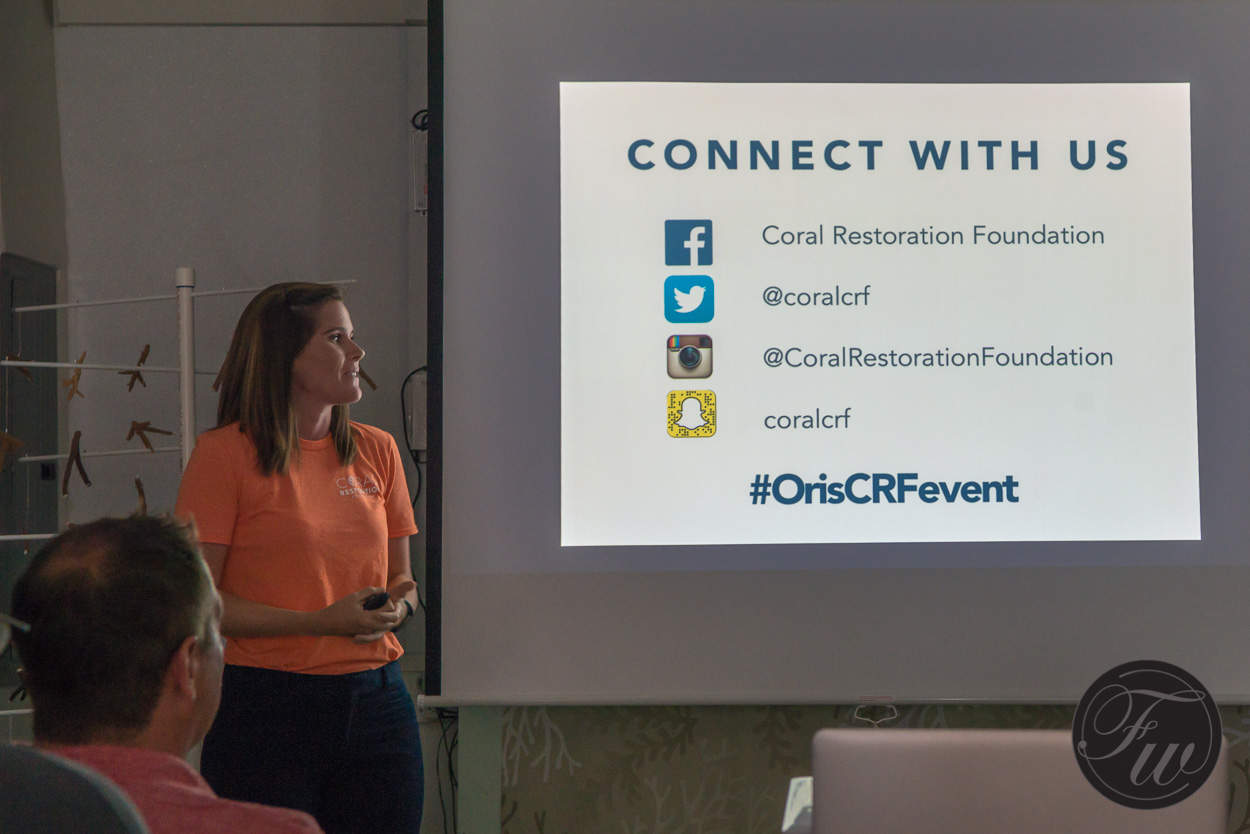 Several ways to connect with the Coral Restoration Foundation

We all heard that the amount of coral in our oceans is rapidly and heavily declining. The coral reefs outside the Florida Keys have experienced a 97% decline since 1970. Local reefs were once dominated by two species of reef-building corals; staghorn and elkhorn. Both species are fast growing, branching corals that protect coastal areas and provide valuable habitat for fish and invertebrates. Without them, dramatic changes are seen with reef life and stability. 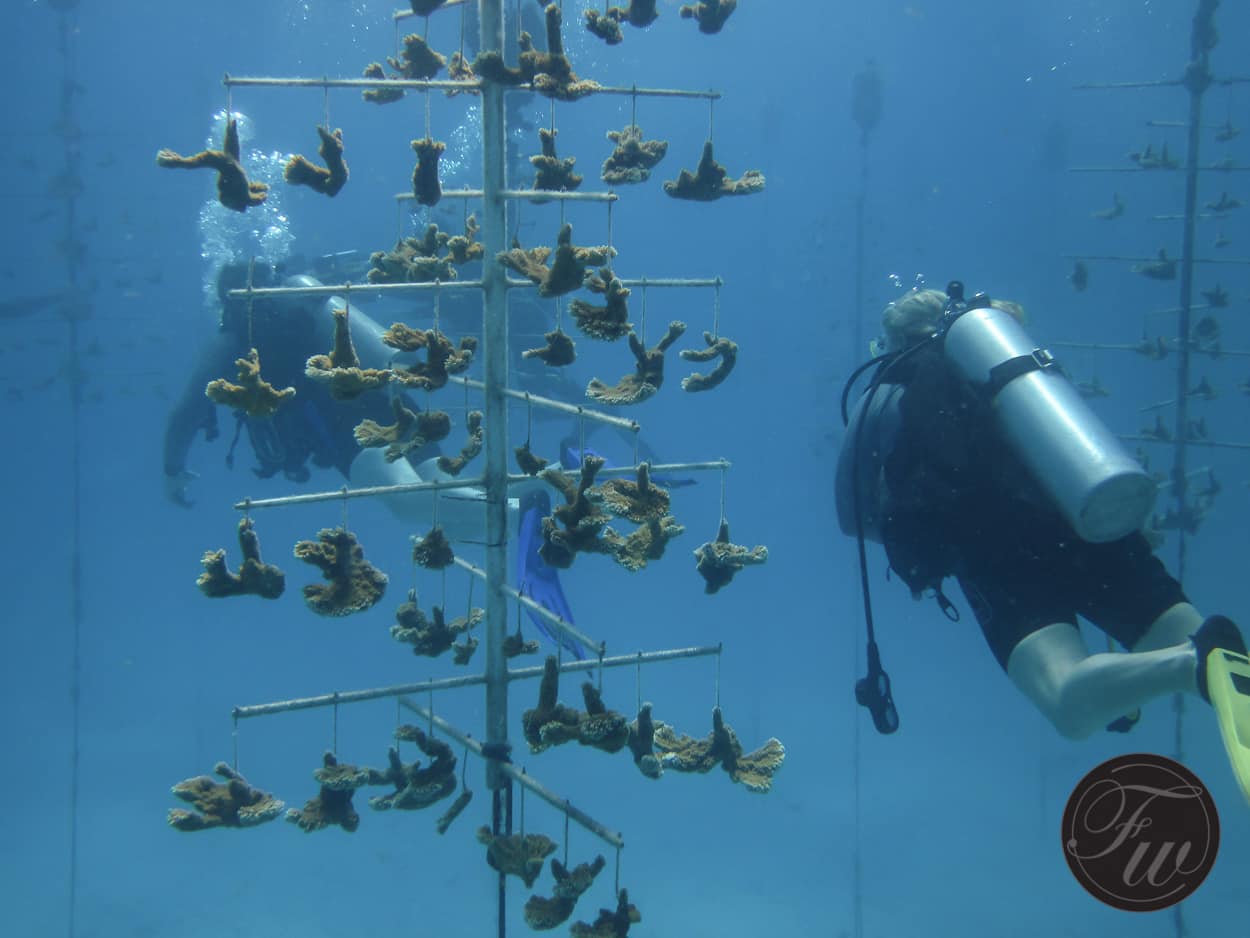 In 2010 Ken Nedimyer (founder and president of CRF) developed the Coral Tree Nursery, a simple framework of PVC pipe that resembles the shape of a tree. The nursery tree is fixed to the ocean floor and buoyed with a subsurface float. Coral fragments are hung from the branches of the tree. The tree floats in the water column and is able to move with storm-generated wave surges. This dissipates wave energy preventing damage to the tree structure or the corals. 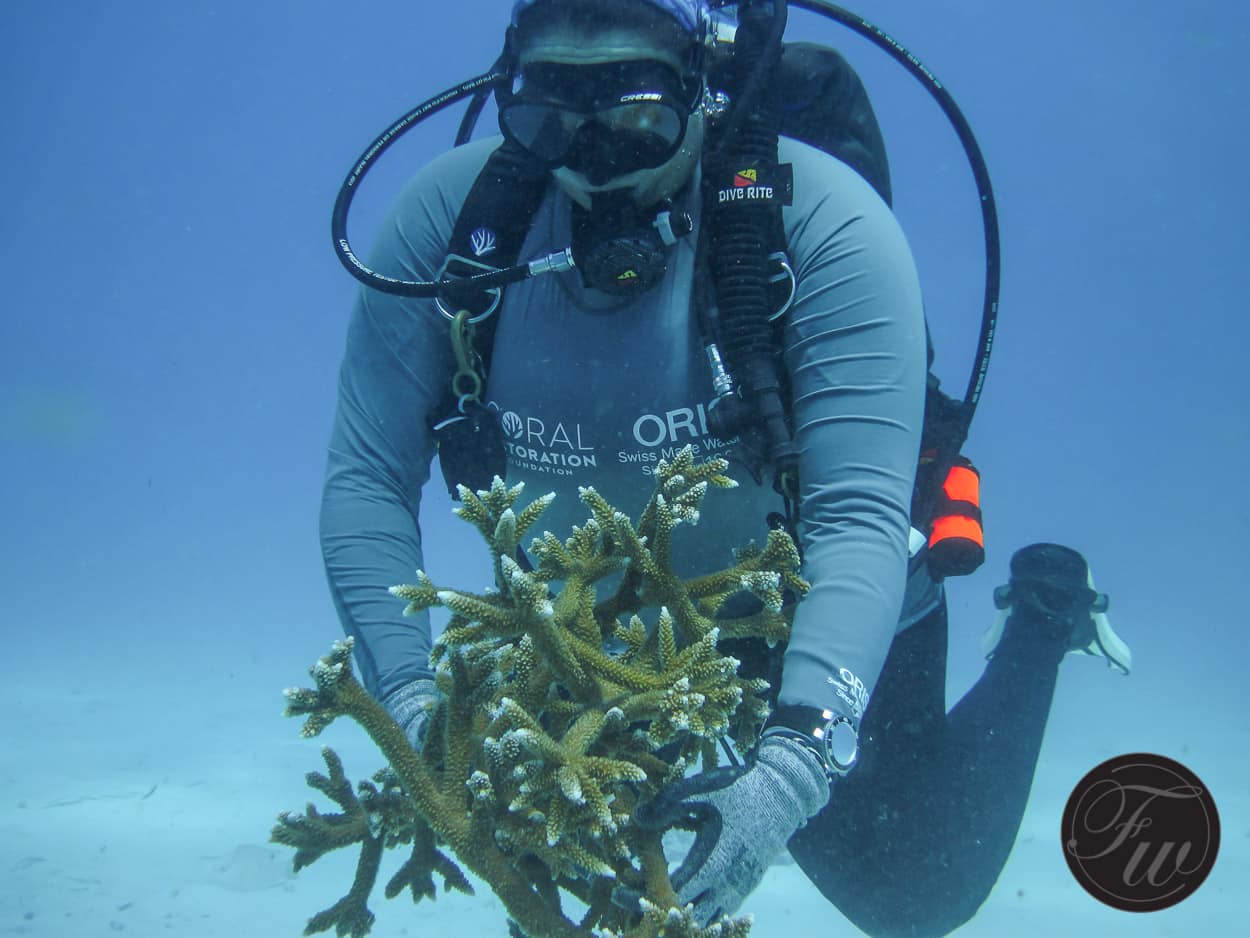 Corals are grown in the nursery for approximately six to nine months. After they have reached a substantial size, they are tagged and taken to a carefully selected reef restoration site where they are attached directly to the reef using a non-toxic marine epoxy. Tens of thousands of corals are produced through this technique and housed in multiple offshore coral tree nurseries. CRF currently has 7 offshore coral nurseries in the Atlantic outside the Florida Keys. 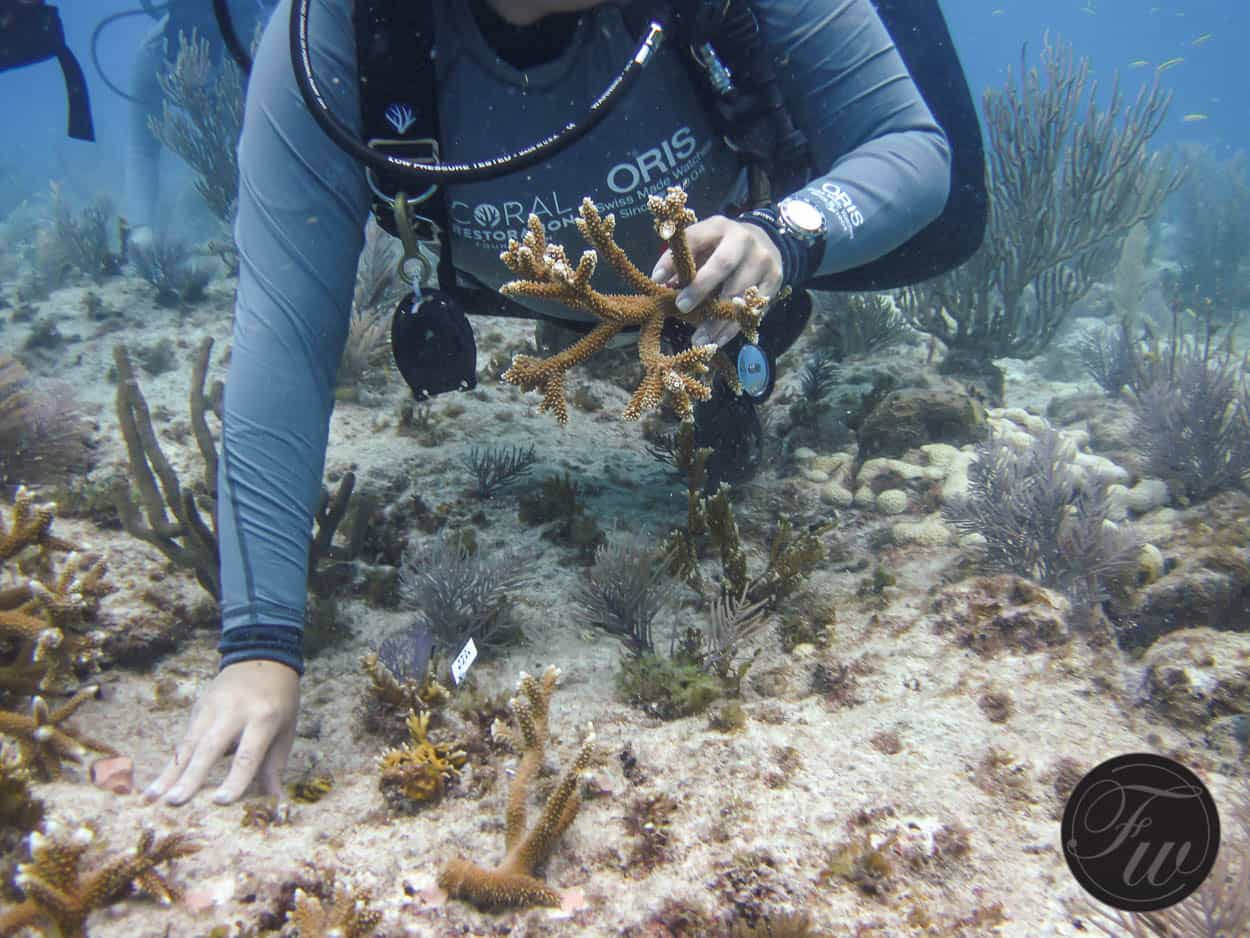 The watch in its proper habitat

Further presentation, to illustrate the above explained coral growing and planting techniques, was taken the next day to one of the offshore coral nurseries. An excellent opportunity as well to show how well the new Oris Staghorn Restoration LE was suitable for it’s meant habitat.

A diver cleaning the reef surface before attaching the coral

Pickles reef is approximately 45 boat minutes outside of Tavernier, situated between Key Largo and Plantation Key. Here is one of of the CRF coral nurseries, where we were showed how new corals grow, are kept and maintained. Here the sufficient grown corals are picked and then brought to their new home grounds. 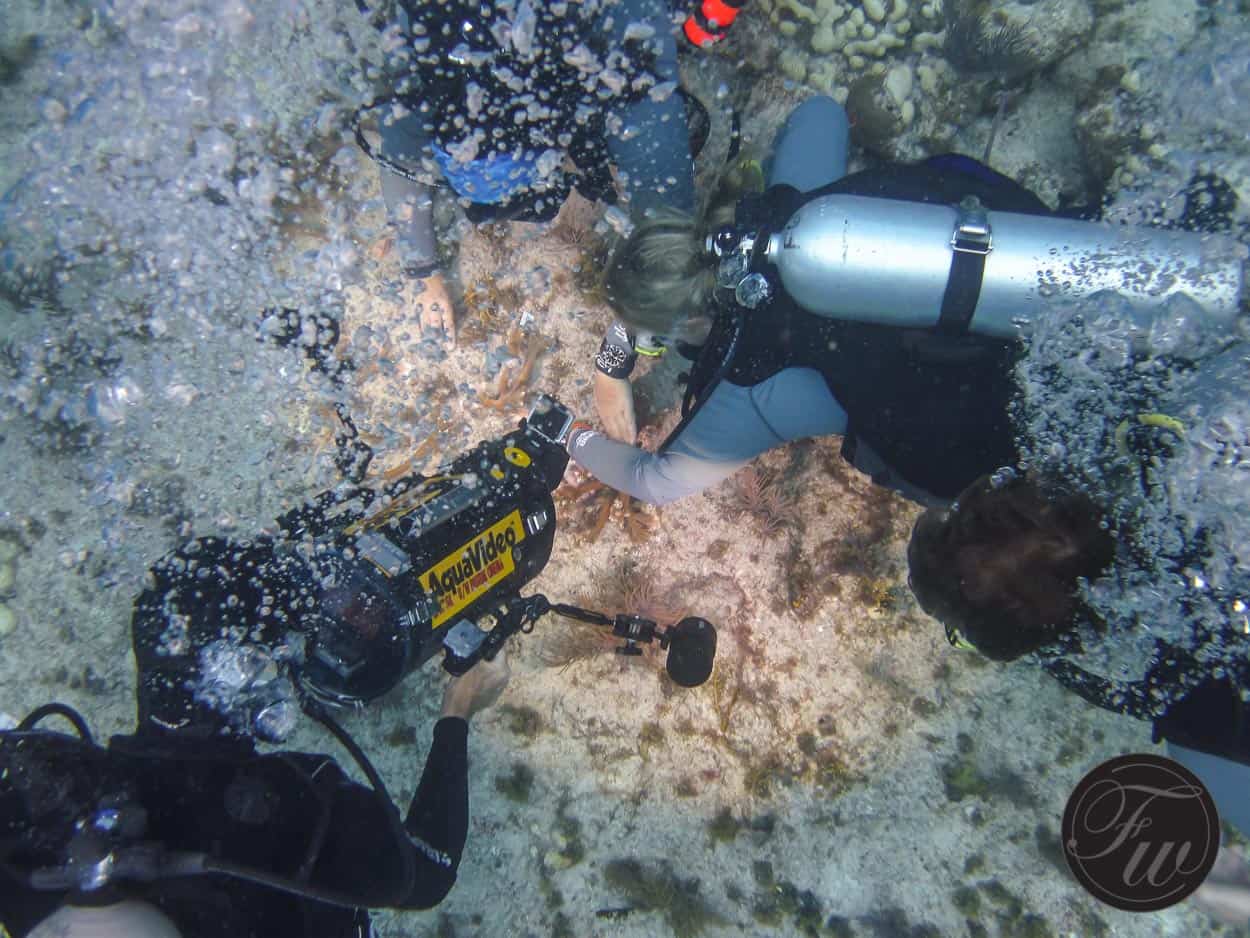 Divers attaching coral to the reef, filmed by an underwater cameraman

The new habitat of these corals can be found a few miles further into the Atlantic. This is where the people of CRF showed us, and where we participated in, the process of replanting the corals. An unequalled and very impressive experience. 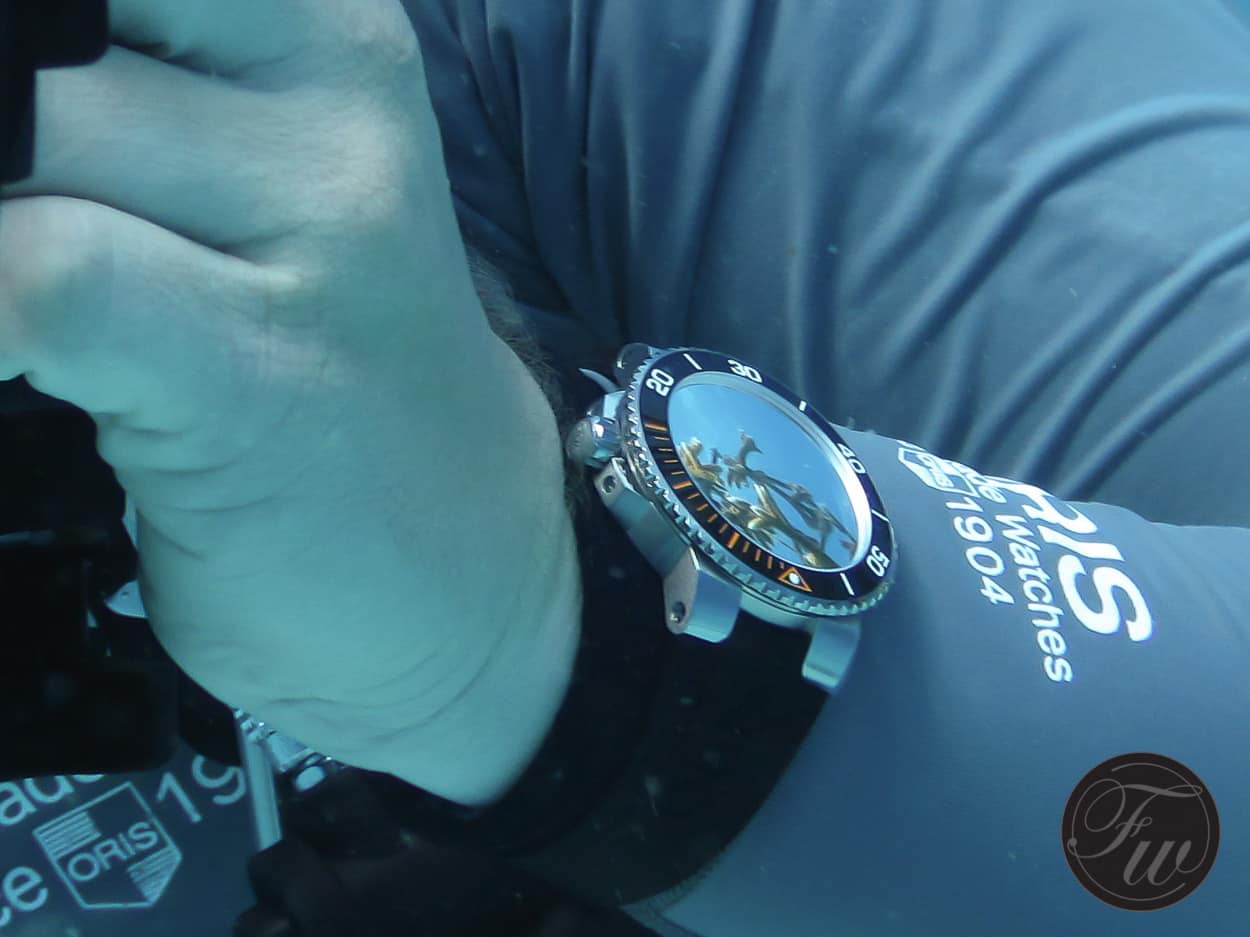 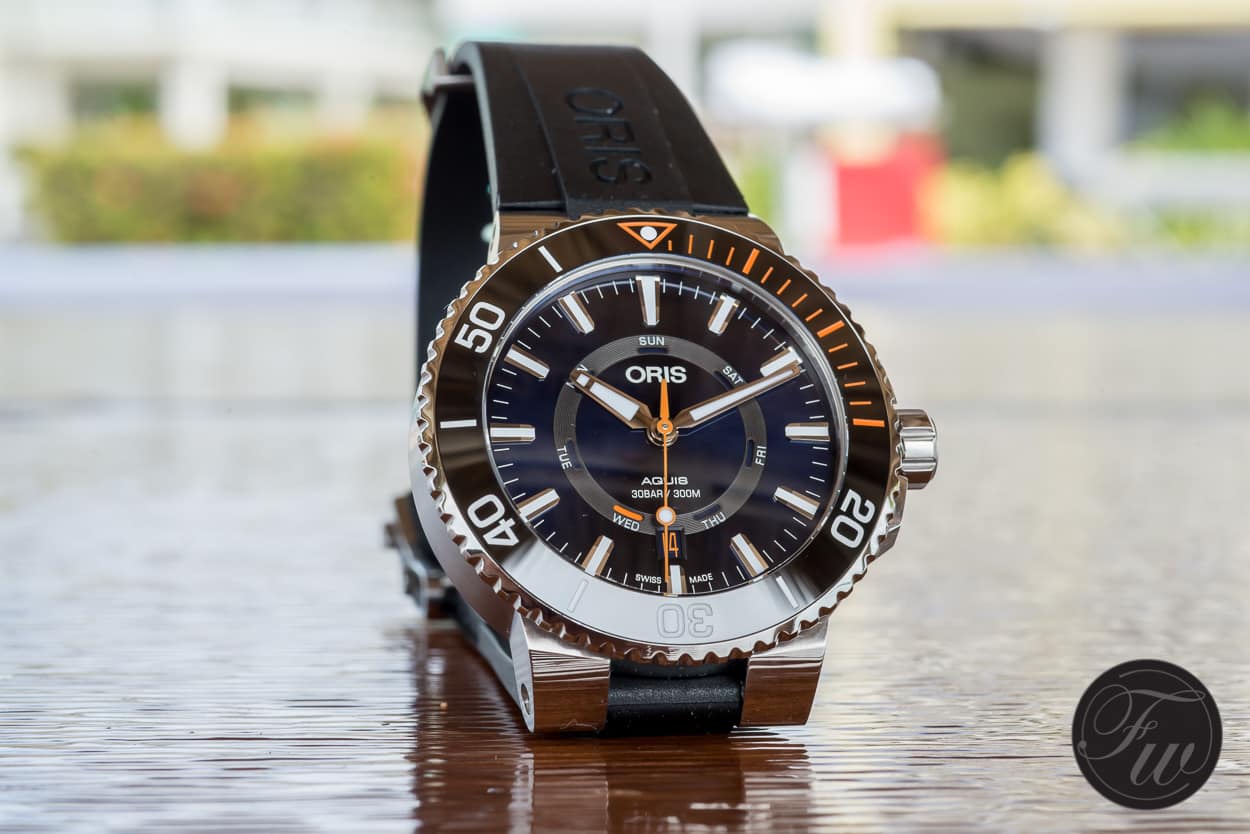 Differences compared to the regular Aquis

On to the watch. Some interesting additional details are to be mentioned compared to the basic version of the new Aquis (which we reviewed here). The beautiful deep dark blue colour of the dial is the first what will catch the eye. Directly followed by the orange printing in the uni-directional rotating divers bezel. The bezel being in high-gloss polished ceramic by the way, in stead of the new brushed black bezel of the regular Aquis Date. 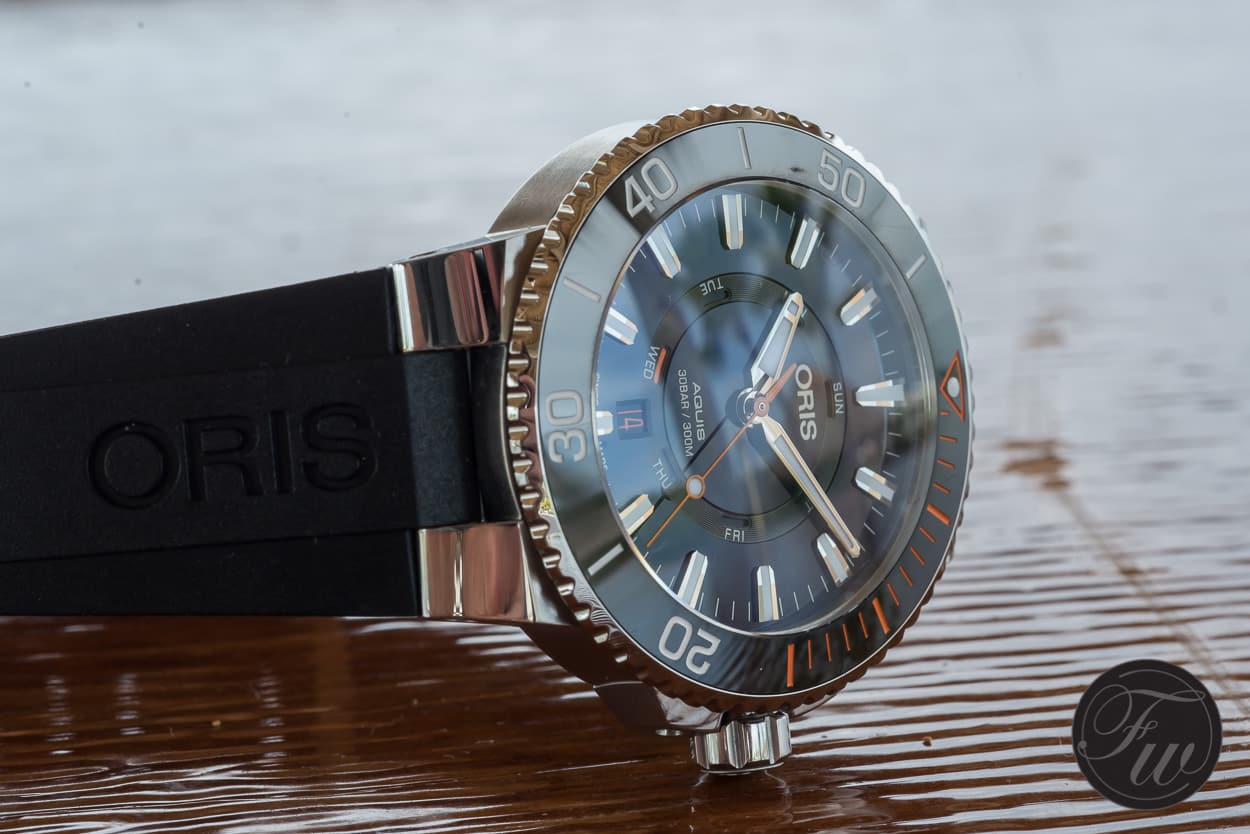 Remarkably orange as well are the numerals on the date disc, as well as the the second hand. The indication of the day of the week however is technically more substantial. Little day-labelled gaps in the dial indicate the day while one of the gap fills orange. A nifty little feature which doesn’t attract too much attention. 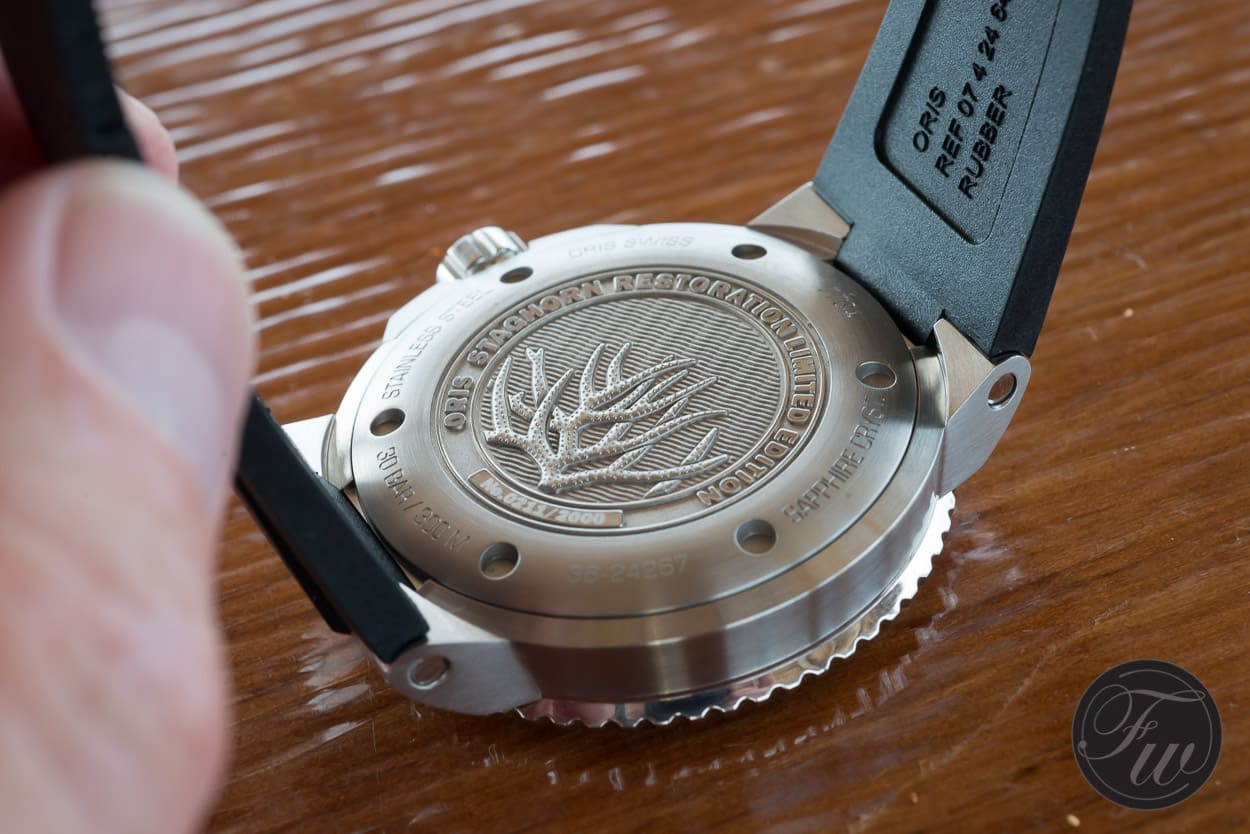 The case back is another major difference to the glass back of the regular Oris Aquis. The Staghorn Restoration LE has got beautiful engraved metal case back. Showing a piece of staghorn coral with its name and credentials printed around it. The individual number of the watch can be found here as well; the watch I pictured and used while diving bears number 0211/2000. 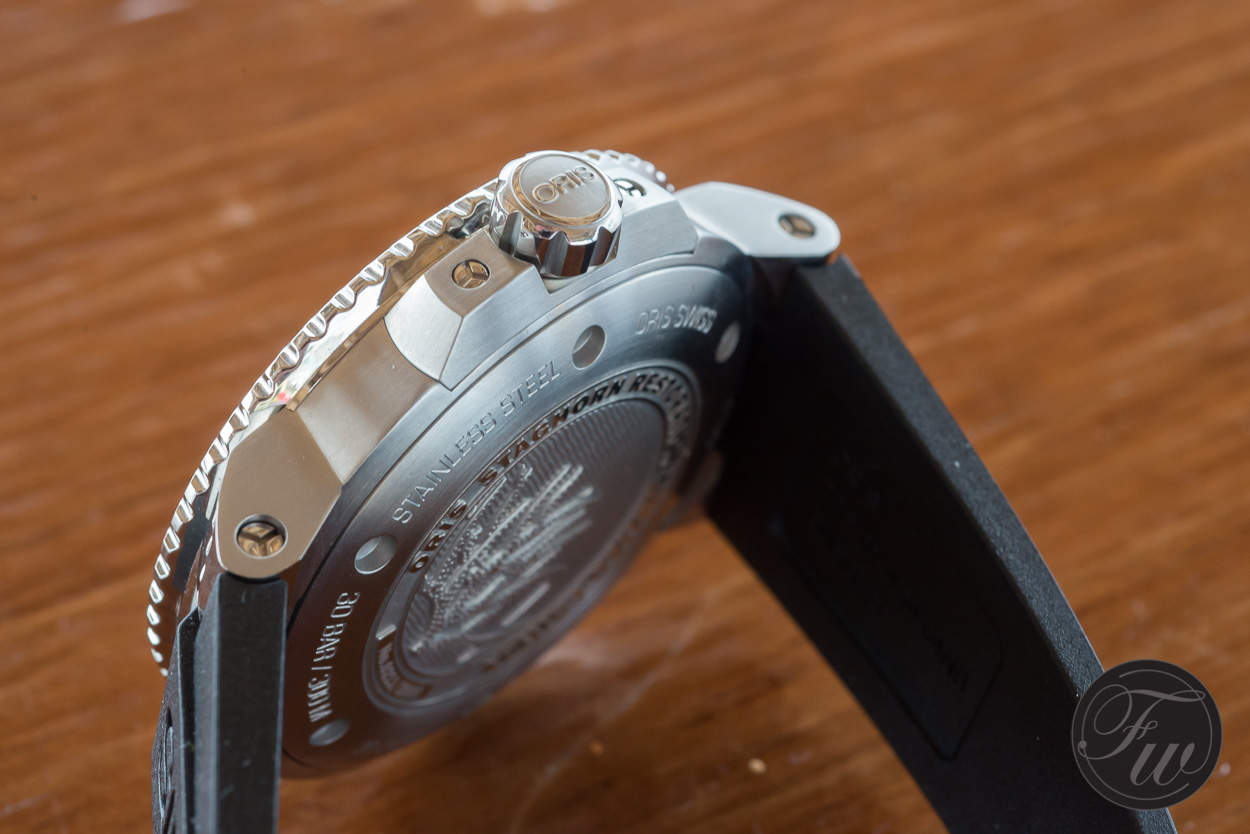 The reliable automatic Oris Calibre 735 (based on Sellita SW 220-1) movement is something which didn’t change. Just like the dimensions of the watch. The case diameter is 43,5 mm, measured excluding the screw-down crown. The sapphire crystal is slightly domed and internally anti-reflective coated. Suitable as a real world diving watch it has a pressure rating of 30 bar. 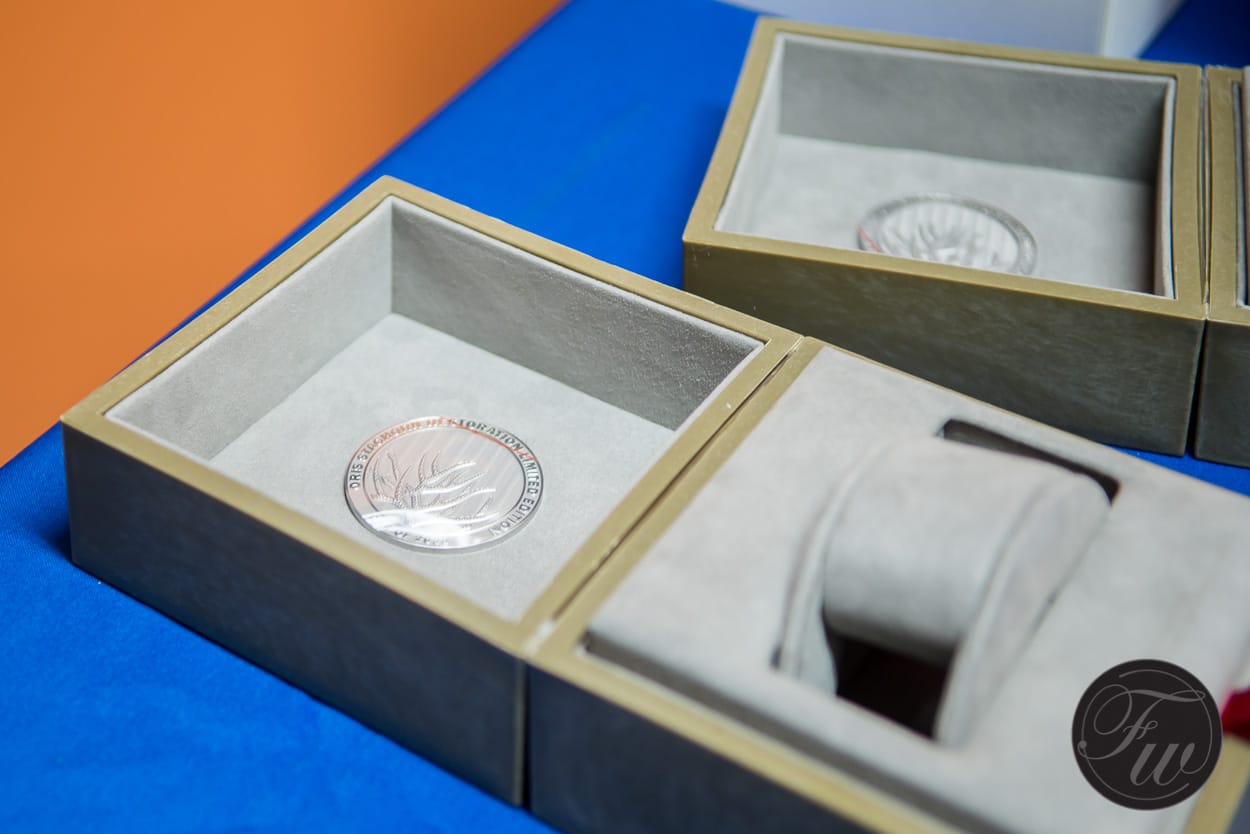 Last but not least. The box belonging to the Staghorn Restoration LE is made out of an ocean degradable material. Based on see algae if I remember correctly. The price for the watch on rubber strap is € 1.900,= and € 2.100,= on a stainless steel bracelet. Both including European VAT. More information on the watch can be found through the Oris website. 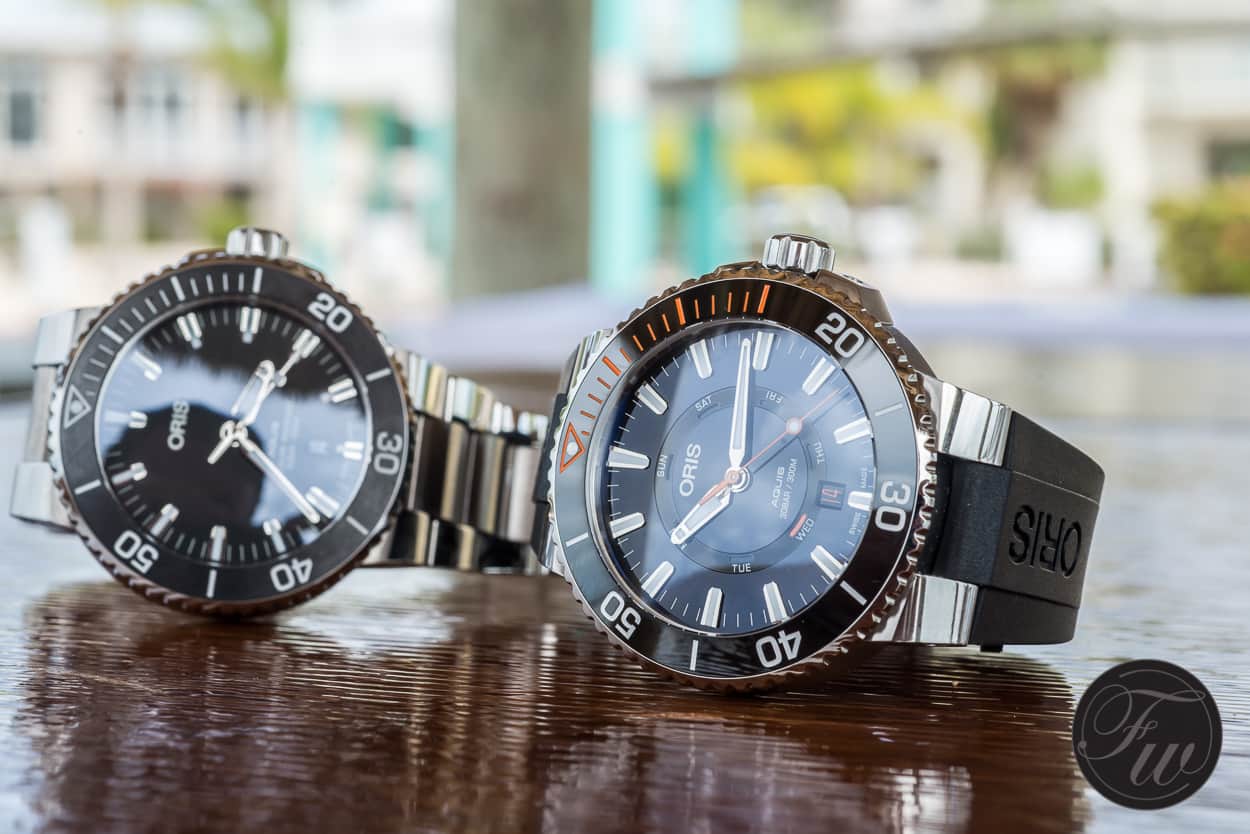 As not all pictures of this event fit in the article, please browse them in the gallery below.

Hot Topics
Introducing: The Omega Speedmaster Super Racing With Spirate System
165 comments
Design Vs. Specs — Which Is More Important To You When Buying A Watch?
86 comments
My Predictions For New Omega Speedmasters In 2023
54 comments
The Time To Buy Is Now: How The Current Economic Climate Influences Watch Buying And How You Should React
51 comments
A Regret-Free Guide To Buying Your First Luxury Watch — Part Three: Higher-End Options From Omega, Rolex, Grand Seiko, And More
48 comments
Popular
Top 10 Rolex Watches – Overview of Models Favoured By Our Readers
Fratello
25
Rolex Submariner – Historical Overview Of A Diving Legend
Robert-Jan Broer
22
Rolex Submariner Hulk versus Seiko SLA019 : Shades of Green
Michael Stockton
29