Quite spectacular for Speedmaster enthusiasts is the auction at Bukowskis tomorrow on October 25th in Stockholm. Two first generation Speedmaster watches, reference CK2915-1. This means not only the first generation, but really the very first (‘-1’) models.

According to Bukowskis, the pristine CK2915-1 from June 1958 is the most prestigious watch they’ve ever auctioned. Both Speedmaster CK2915-1 watches have the original broad arrow hands, non-Seahorse inscription case back and the original base 1000 bezel in stainless steel. One is estimated at around 95K Euro, the other (older one) at approximately 37K Euro. Why this difference? Let’s have a closer look. 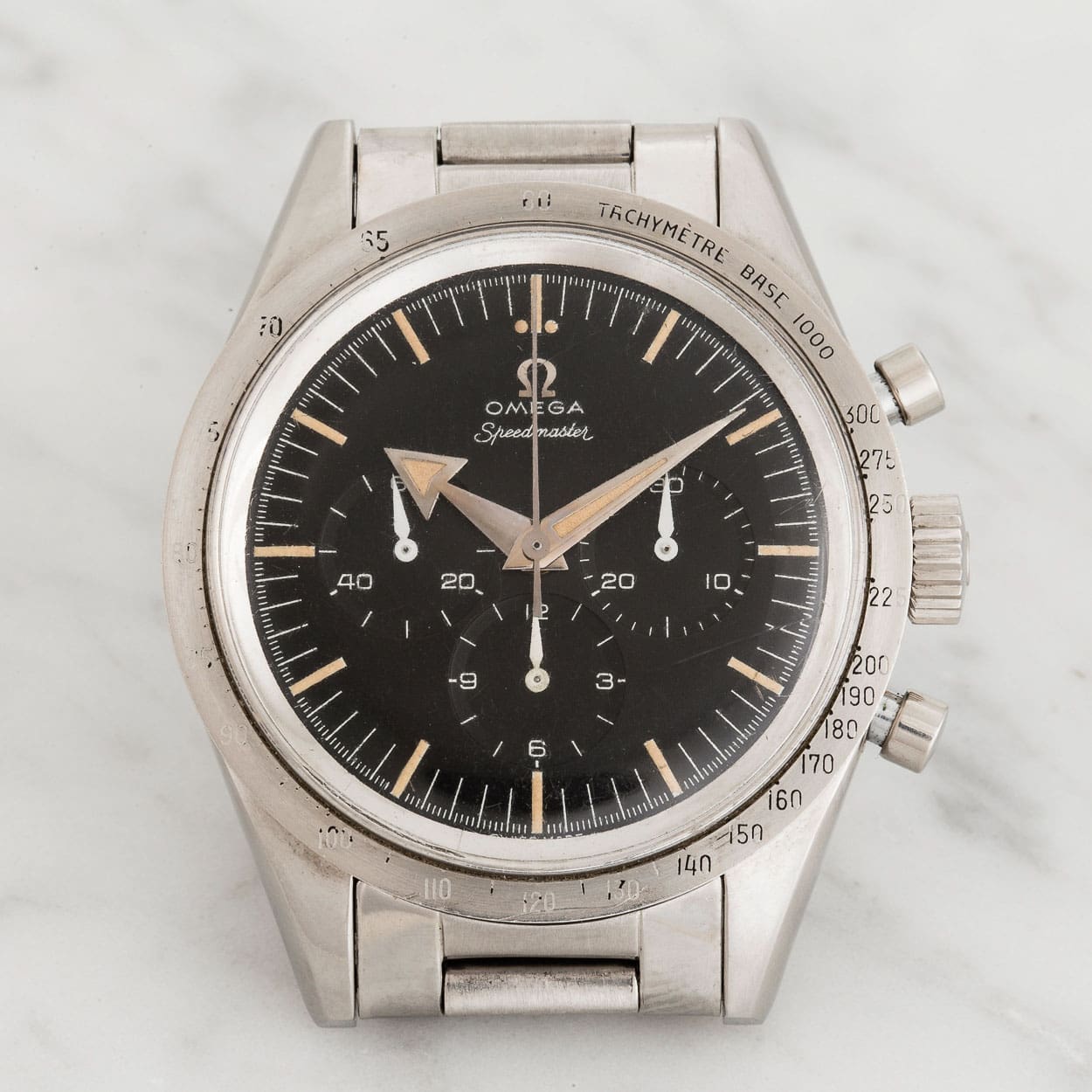 The Speedmaster CK2915-1 watches of tomorrow’s auction are very different in condition. This, of course, also determines the price. The CK2915-1 they have (lot 45) from June 1958 (with serial number 15.996.369) is the youngest from the two, but also in the best condition. Despite the lack of a box and the accompanying papers, the condition of the watch is rated very highly. It has been conserved for many years according to Bukowskis, who received the watch from the son of the first owner, who basically found it in an attic. As you can see, the dial and hands are in an amazing condition. This watch comes on the original 7077/6 bracelet. According to Bukowksis the movement is in a ‘9/10’ condition. However, before the buyer actually is going to wear it (if!!) it would be wise to have it serviced first after so many years of being tucked away in an attic. The case gets a ‘9/10’ as well, which is very high, but except for the bit of wear on the bezel the case is indeed sharp and in amazing condition. Also, this CK2915-1 also has the original crown and pushers. 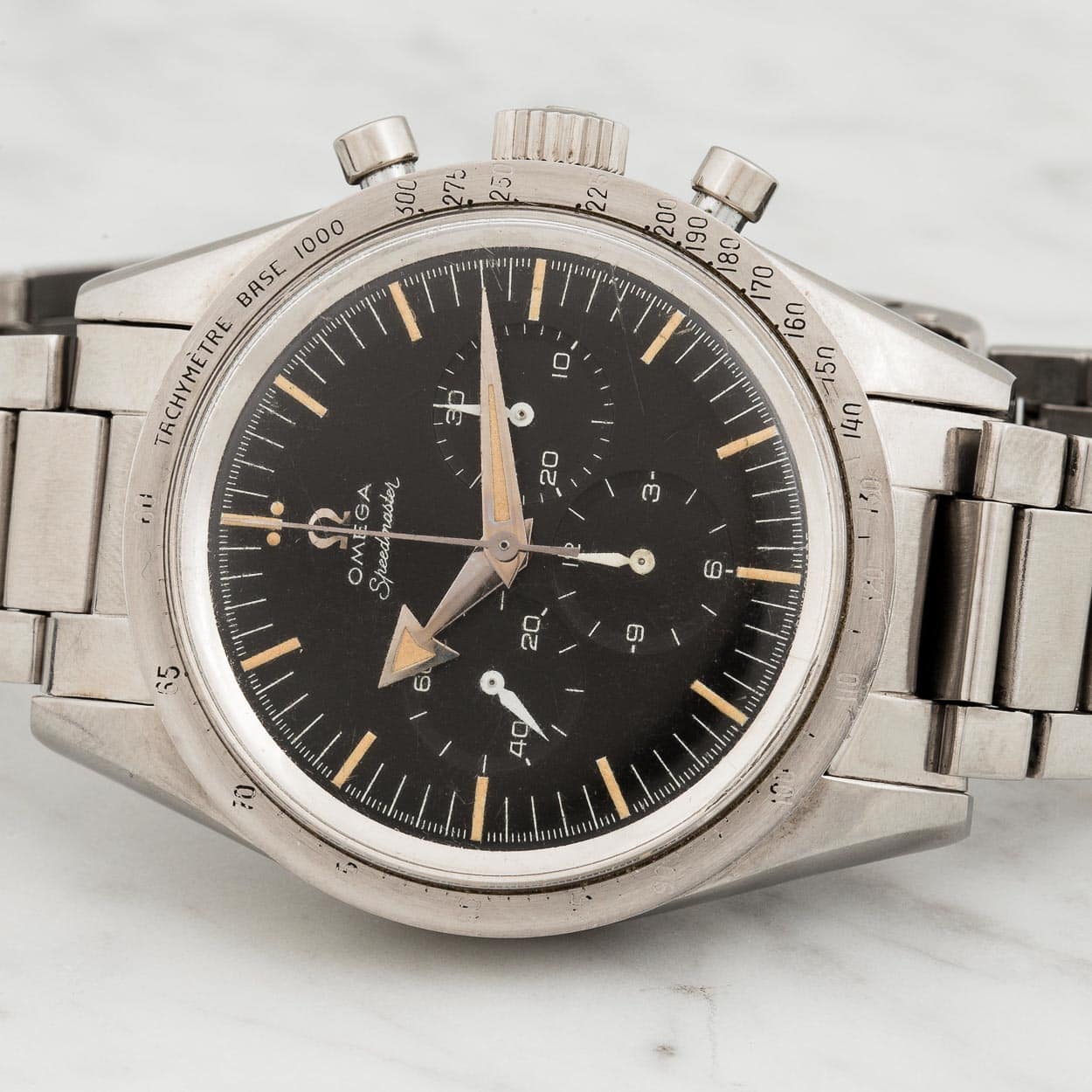 The second Speedmaster CK2915-1 is a bit older, as it was manufactured on March 24th of 1958 and has serial number 15.500.563. This lot (46) is a bit different from the other CK2915-1. In the first place because it has no stainless steel bracelet, but a leather strap instead. That’s not a bad thing per se of course, but it also has a couple of things that make this watch – despite the much lower estimate – a more difficult item to sell I think. The bezel has been replaced at some point, with the one of the 1997 Re-edition one (reference 3594.50). I’ve seen this more often, and it is easy to detect by the DON, but also by the typography of ‘TACHYMETRE’. The CK2915 bezels have a flat-top ‘A’ in the word tachymetre. 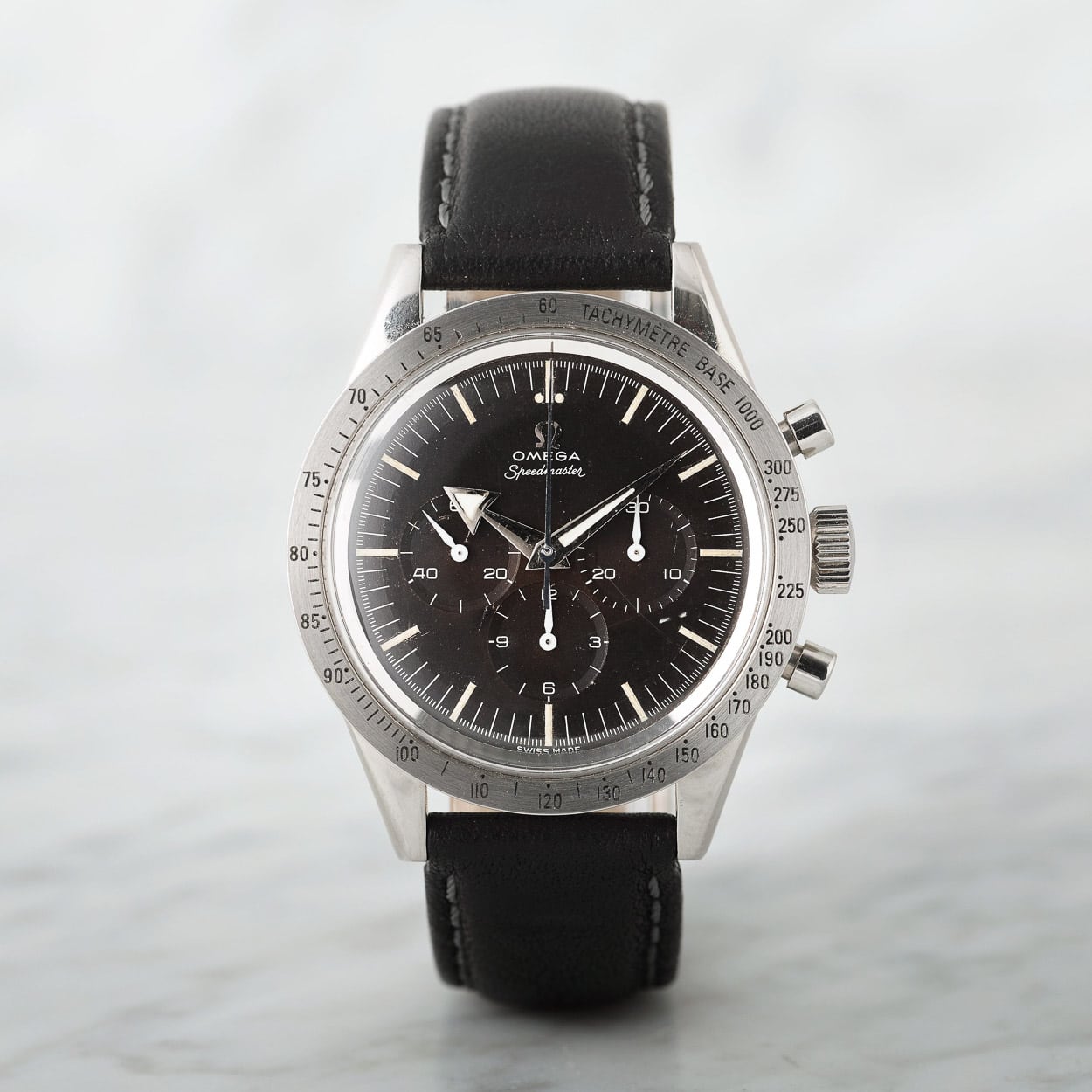 The crystal also has been replaced (which would not be a problem for me personaly), but also the hands have been relumed. So you could say that this watch has been tempered with. The crown is also from a later period. The movement looks fine, but shows some signs of wear (around the column-wheel you can clearly see some dirt and markings). That said, finding a Speedmaster CK2915-1 is a tough job and if you can live with these shortcomings of the March 1958 version, it is a lot cheaper than buying an almost pristine version like the one from June 1958.

It is an excellent example of what makes the difference in price for a pristine condition Speedmaster CK2915-1 and one that is a first generation as well, but with some restoration work done using modern parts. Buying the CK2915-1 from March and thinking you will find the original parts is an utopia by the way.

Both watches were originally shipped to Sweden according to the archives. Interesting to note is that both watches have been on display during a Speedmaster 60th anniversary event held by Omega in Stockholm.

Hot Topics
Introducing: The Omega Speedmaster Super Racing With Spirate System
159 comments
Design Vs. Specs — Which Is More Important To You When Buying A Watch?
86 comments
The Time To Buy Is Now: How The Current Economic Climate Influences Watch Buying And How You Should React
51 comments
Introducing: The New Cartier Tank Française
49 comments
A Regret-Free Guide To Buying Your First Luxury Watch — Part Three: Higher-End Options From Omega, Rolex, Grand Seiko, And More
48 comments
Popular
(From The Archives) Shut Up & Read The Truth About Cartier Watches
George Cramer
21
Hands-On With The Seiko Prospex Dawn Grey Series
Robert-Jan Broer
12
Grand Seiko SBGA211 ‘Snowflake’ And Why I Didn’t Buy It
Robert-Jan Broer
23