If you are in favour of big and bold diving watches, think Deepsea or Ploprof, you can add another to that list: the Ulysse Nardin Diver Deep Dive. There’s nothing much toned down about this particular watch, but I assume that this is also not intended by the Le Locle based manufacture.

Ulysse Nardin Diver Deep Dive – It Will Not Go Unnoticed

There are more watches on the market with a case as big as 46mm, or even larger. But even my approx.50mm Seiko Tuna 6159-7010 looks less bold. The 46mm isn’t that extreme these days, but the two ‘extensions’ on the Ulysse Nardin Diver Deep Dive creates a watch that will not go unnoticed. But I believe that is exactly what Ulysse Nardin’s team of designers had in mind. These two extensions are a helium escape valve, at 9 o’clock and the huge crown protection system at 2 o’clock. The helium escape valve we’ve seen before in the aforementioned Sea-Dweller (Deepsea) and the post-2009 Seamaster PloProf 1200M models. 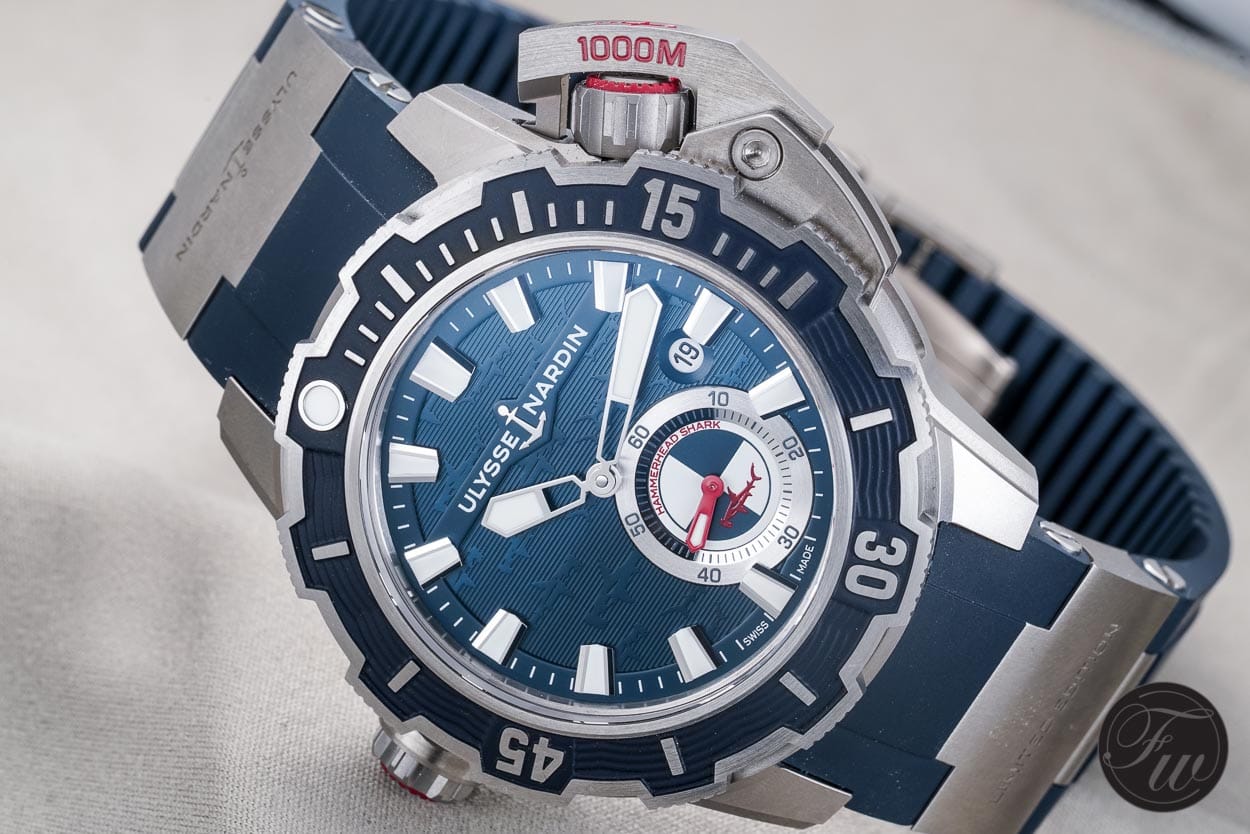 Ulysse Nardin to me always had something ‘Russian’ about them. I know they are quite popular over there, and when I was going there last May, the first watch I saw on someone’s wrist was actually a Ulysse Nardin. Prejudice, perhaps so but I was also told by watch collectors there that in Russa Ulysse Nardin is still very popular. It is a bold watch, they have a wide range in gold and over there big & bold (& gold) still is seen as a status symbol. One of the main reasons for some to buy a watch, still. With this Ulysse Nardin Diver Deep Dive, you won’t go unnoticed on Nikki Beach for sure. It makes me wonder how many of these watches (limited to 300 pieces only) will actually see some underwater action, as it can easily do this with its water resistance of 1000 meters. That said, you can wonder how many of the thousands of Submariner or Seamaster 300M watches got some of that same action. 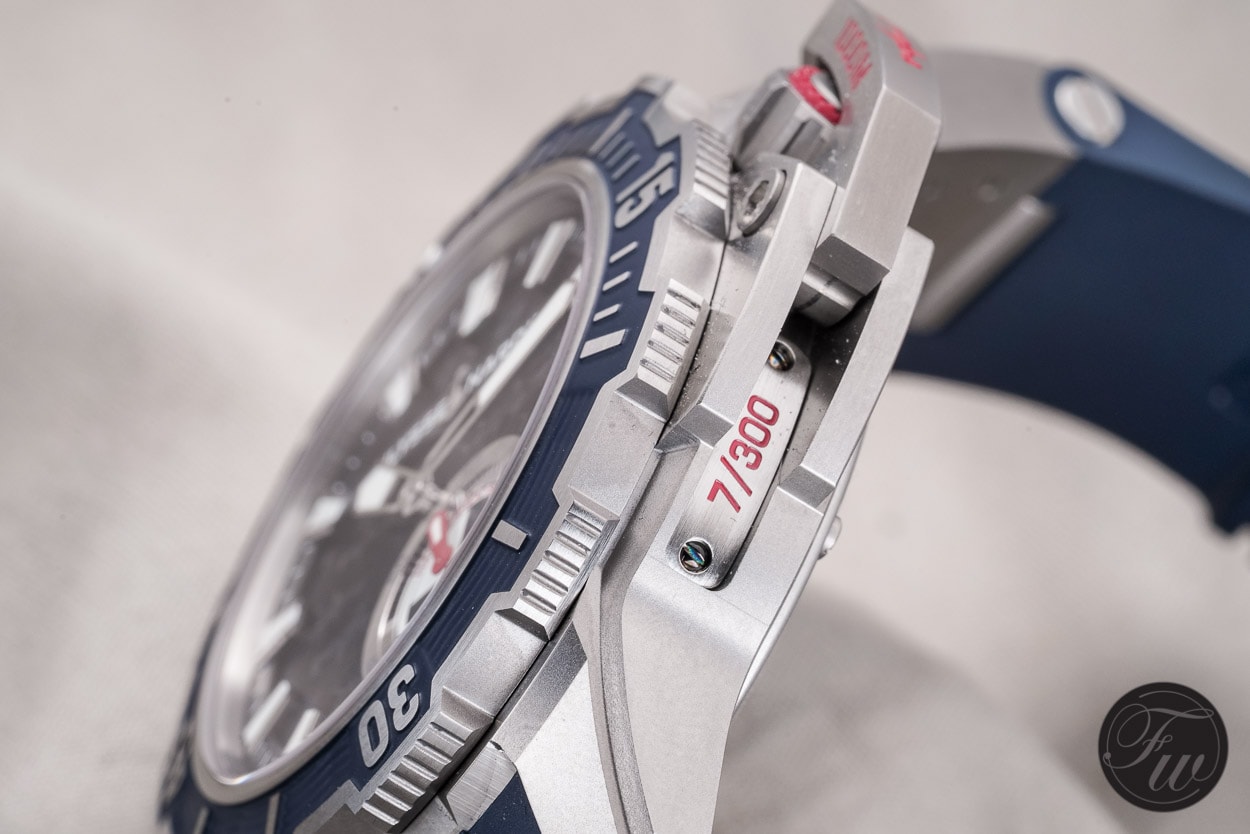 To save some weight, Ulysse Nardin made their Diver Deep Dive of titanium. For the bezel they used rubber for the diving scale in-lay. The bezel is easy to grasp and to use, due to the notches. Interestingly enough, the dial does not indicate the water resistance of 1000 meters, instead this is engraved (and filled with red lacquer) on the screw-down security crown. That crown system reminds me a bit of Panerai’s crown, where this crown is screw-down, of course.

According to Ulysse Nardin, the look of the Diver Deep Dive is stark yet shark. Ok. Sharks indeed, as there are no less than 15 hammerhead sharks on the dial, one on the case back and one that swims on the side of the crown guard. Then, there’s a little red shark in the subdial at 4.30 and you will also find it written on the dial ‘Hammerhead Shark’. In red. On Ulysse Nardin’s website, I find no typical explanation for the use of all these hammerhead sharks other than this slogan ‘the look is stark yet shark’. The watch is meant for those who love active leisure and all water sports. When I first laid my eyes on this watch, when visiting the SIHH in Geneva, I thought there must be something going on about sharks. Perhaps a foundation for these hammerhead type of sharks, but there’s no further information regarding this. So I just feel, unless I am overlooking things, there is no story to it other than the hammerhead shark being a design feature. Well, let’s say that I prefer this over some made up stories that we find every now and then. If you like a watch that sticks out, this one should be on your list. 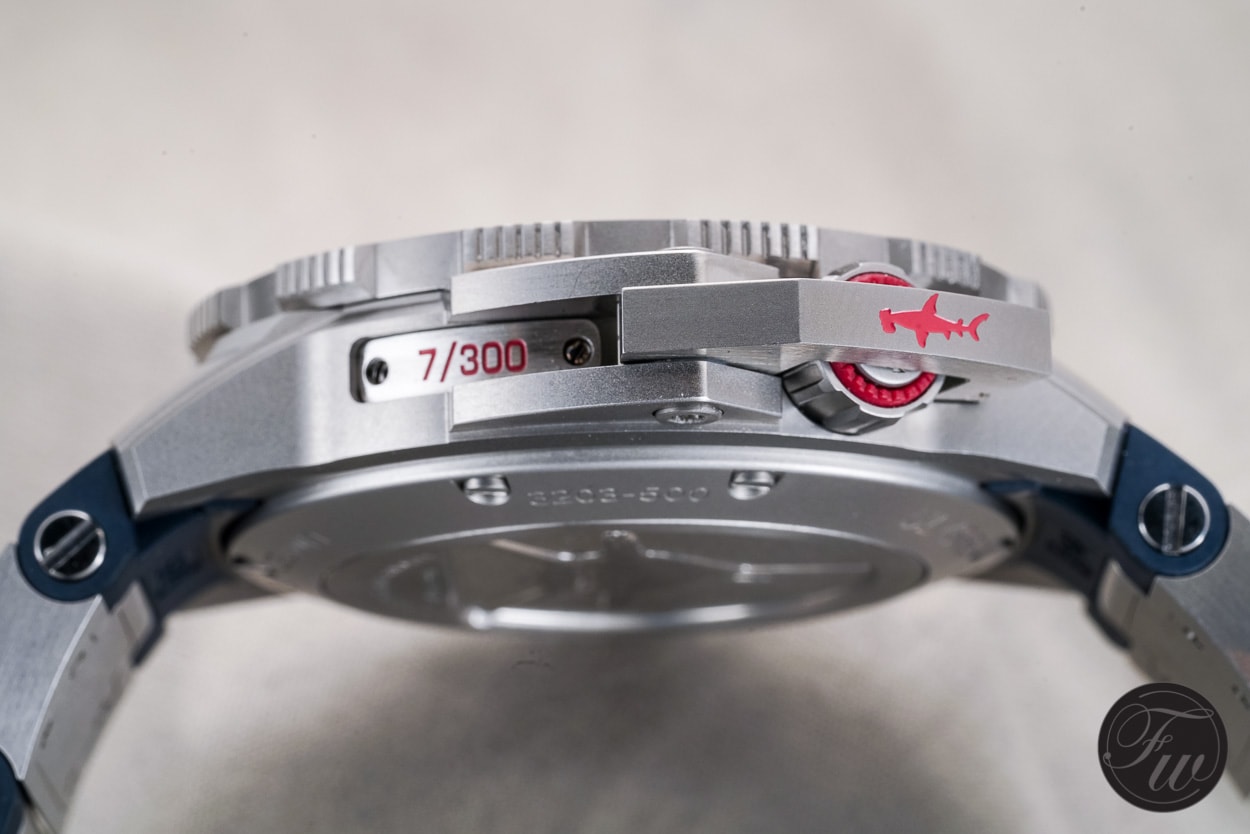 Besides the appearance of the Ulysse Nardin Diver Deep Dive, the watch has some interesting technical specifications as well. There’s the helium escape valve that is there to keep the watch in one piece after you did a saturation dive (during the decompression stage), but there’s also this secure crown guard. I could be wrong, but sometimes I feel that if you make things very complicated, or literally sticking out too much, it is bound to get damaged or hit (resulting in malfunctioning). But it does feel solid for sure, but banging it against the doorposts is still not recommended. With all these design features, you would almost forget about the overall finish of the watch. The Ulysse Nardin Diver Deep Dive has polished surfaces as well as brushed finishes, which looks very neat. Even the small subdial rings are a combination of brushed and polished. The brushed titanium looks very industrial, especially with the crown guard. The hammerhead sharked dial has been applied with Super-LumiNova, as well as the large sword hands, so this watch is very readable in low-light conditions. 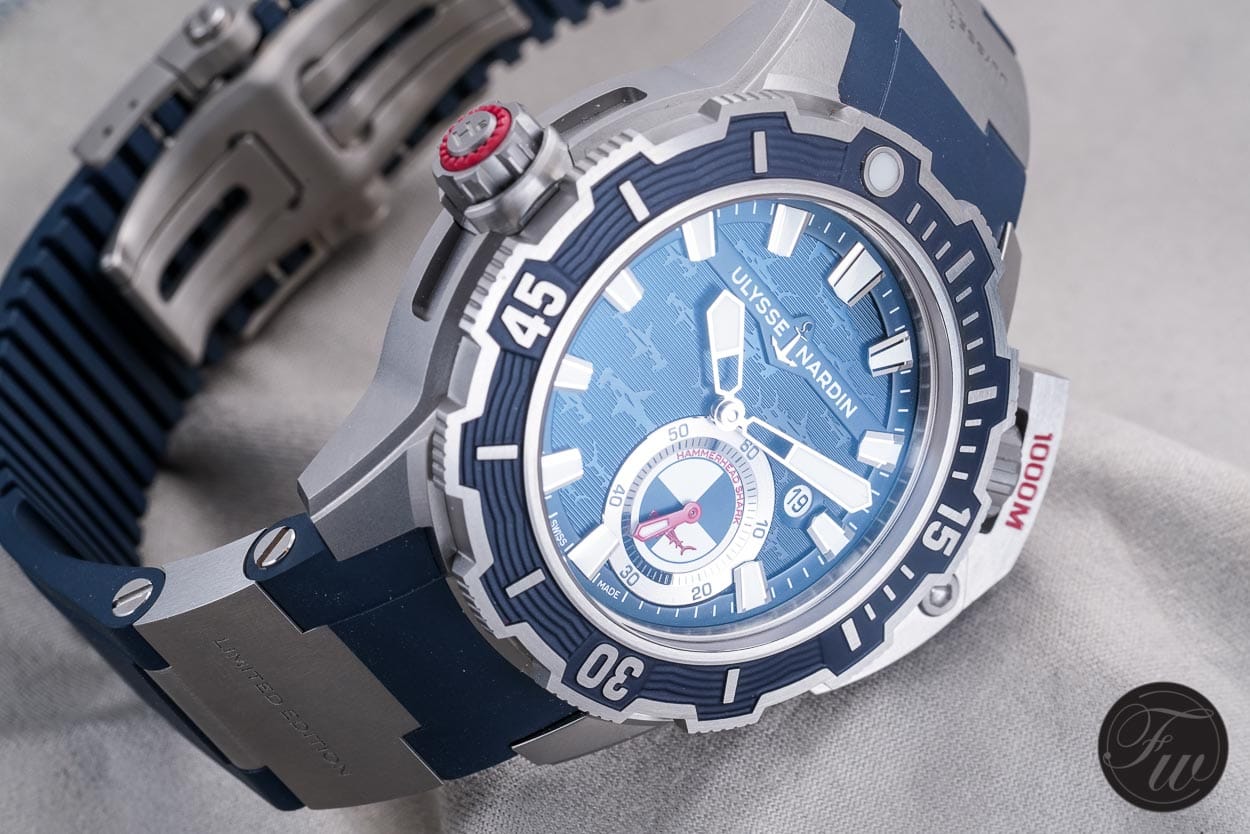 Inside, we find Ulysse Nardin’s calibre UN-320 movement. An in-house movement with a silicium spiral and anchor escapement. This movement has a power reserve of 48 hours and features a date function (displayed at 3 o’clock on the dial). The case back is screw-down and instead of displaying the UN-320 movement, it has a bas-relief hammerhead shark on there. All other relevant information has been engraved in the brushed case back as well.

You Asked Us: Rolex or Tudor

Hands-On With The Seiko SLA019J1 Marinemaster