One of my first encounters with Ulysse Nardin was in 1999, when Gerard showed me his Ulysse Nardin GMT ± Perpetual watch. He wrote about it recently in detail, on Christmas day (find it here). At the time, Gerard’s watch shop in The Hague was official retailer for Ulysse Nardin, so once in a while when I visited his store (more often than he probably liked) I had the opportunity to have a closer look at these watches.

At some point, when he didn’t carry Ulysse Nardin anymore in his shop, I didn’t come across them much. Until I started to write about watches on this website. Somehow I lost interest in the brand, especially when the brand from Le Locle came up with things like this Chairman phone. That’s right, a phone.

However, since a few years it seems that Ulysse Nardin re-invented themselves and has a strong focus on their watches again. Last year they were at SIHH for the first time and I have to say I was impressed by their collection of watches. Their tourbillon, priced at CHF 28,000.-, is a good example. However, today I have a closer look at one of their more affordable pieces and a more useful complication as well, the Ulysse Nardin Marine Chronograph. 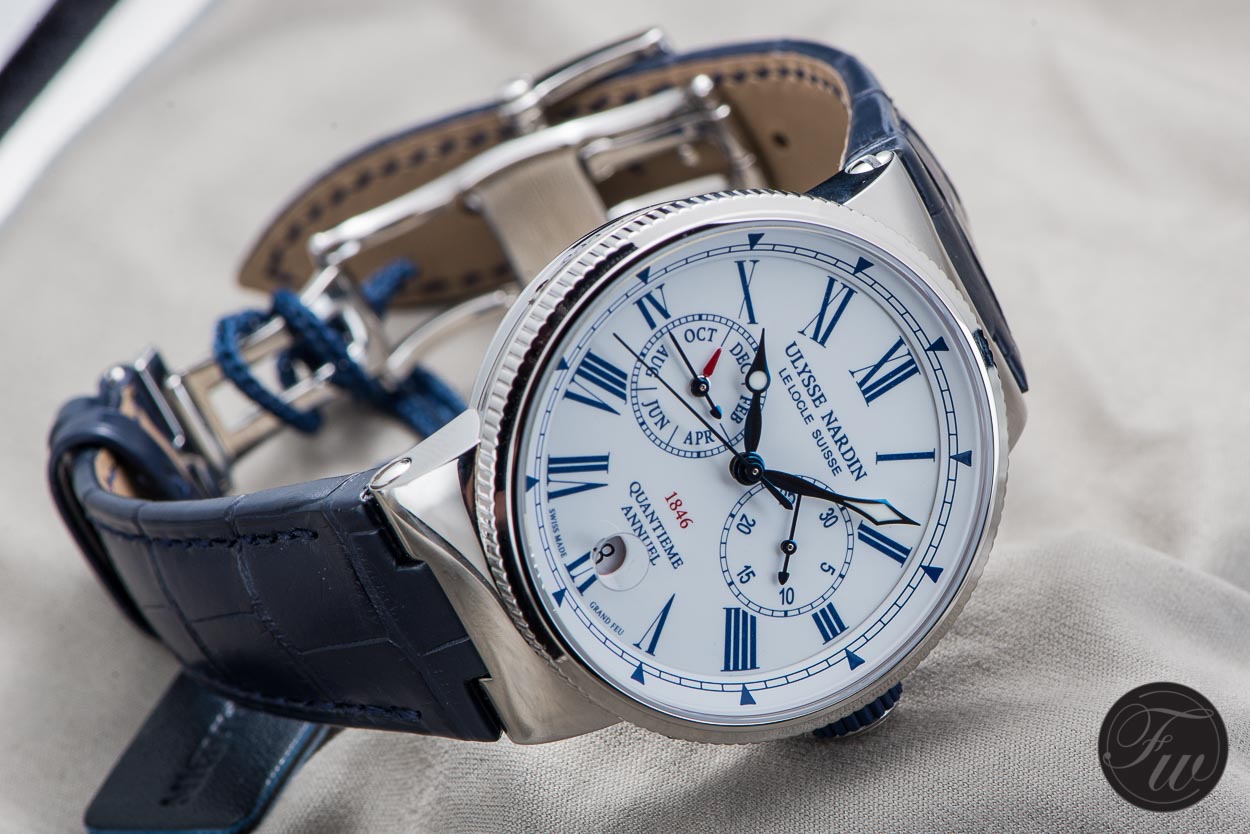 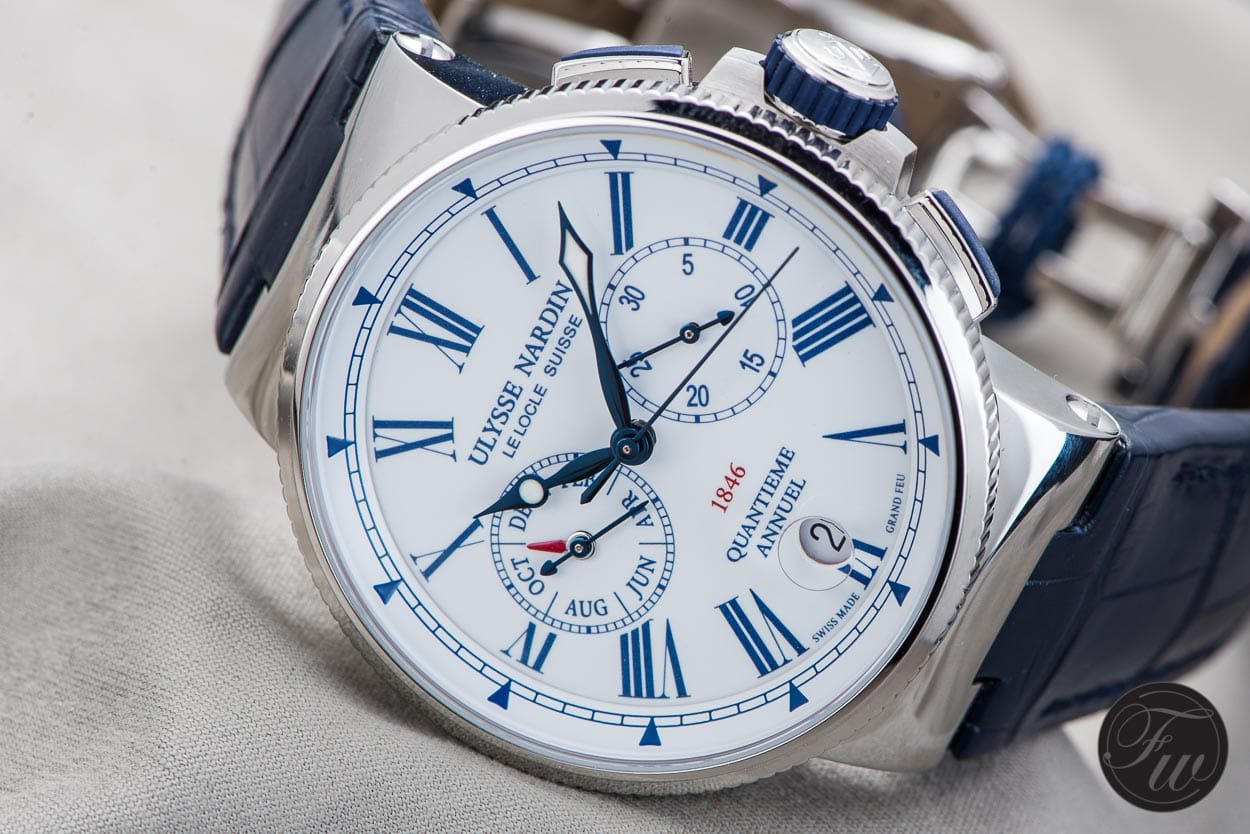 One of the Ulysse Nardin watches that spoke most to me during the SIHH in 2017, was this Marine Chronograph. I have a weak spot for chronographs and the annual calendar is an awesome bonus. Just like the perpetual calendar of the Ulysse Nardin GMT ± I mentioned above, this model also has a backward/forward adjustment of the months. This feature is awesome, as you don’t have to worry anymore that you mess up the calendar setting. In the worst case, with other annual and perpetual calendar watches, you either have to wait until the actual date reaches the date on the watch, but if you – by accident – advanced the calendar months in advance, you need to return it to a watchmaker to have it corrected. We all know how long that can take with some manufactures, sometimes almost as long as when you just wait for the correct month yourself. Anyway, no need for this hassle with Ulysse Nardin’s annual calendar of their Marine Chronograph.

For those who don’t know, an annual calendar only needs a correction on March 1st while a perpetual calendar also will have that done automatically as it is mechanically programmed for a couple of centuries. You don’t need to worry about the other months, whether they have 30 or 31 days. It is all sorted out. A great complication for those who fancy a date on their watch. Besides that, the Ulysse Nardin Marine Chronograph also has a month indicator in the sub dial at 9 o’clock.

The chronograph and annual calendar are functions of the Ulysse Nardin UN-153 movement. This in-house developed movement uses the invention by Ludwig Oechselin (a portrait on this genius watchmaker can be found here), that enables the owner to advance and reverse the annual calendar. I talked about that above. Interesting enough, the Ulysse Nardin Marine Chronograph reference 1533-150-3/40 has three sub registers, while this version (reference 1533-150/E0) only has two, using the same movement. They dropped the hour recorder at 6 o’clock and to be honest, the watch looks a lot cleaner this way. 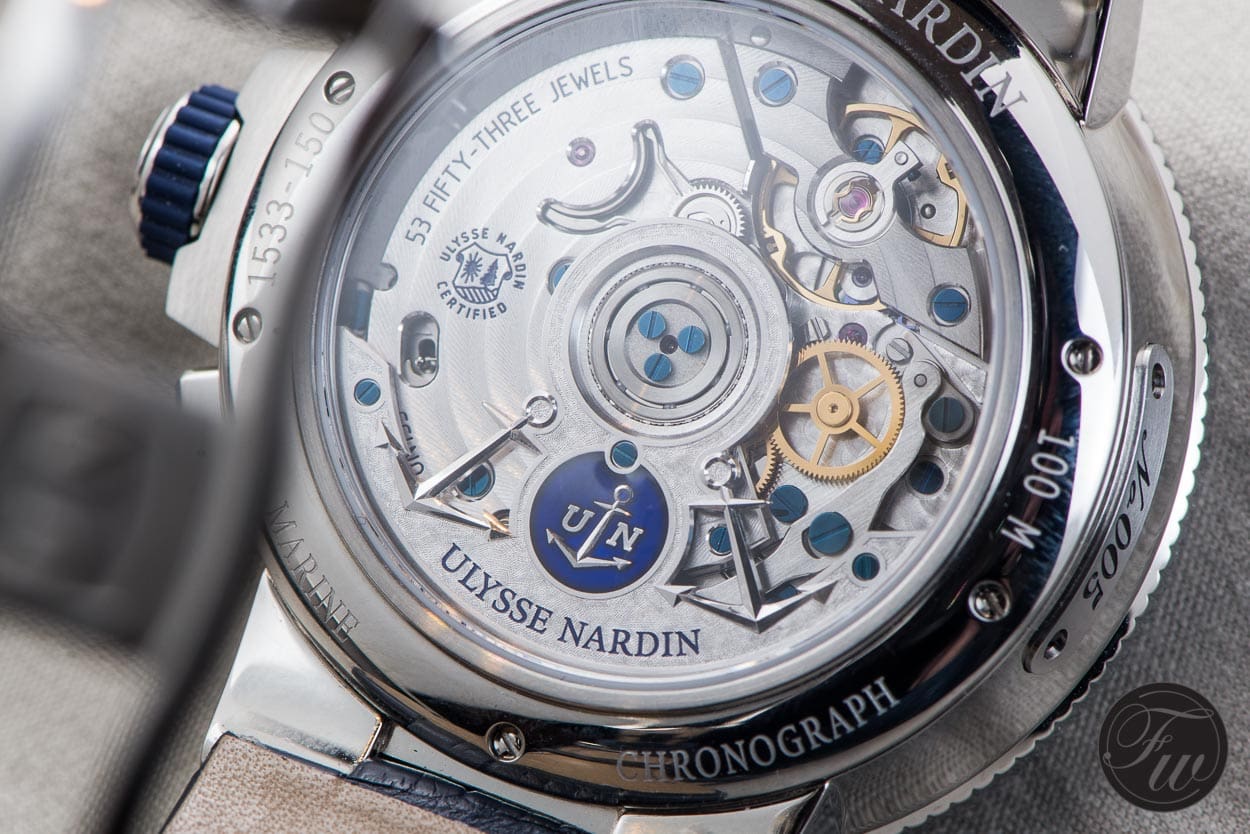 The chronograph uses a column-wheel and the annual calendar is basically a module. The caliber UN-153 movement ticks at 28800vph (4 hz) and has 53 jewels. A high number of jewels, like this, often refers to the use of an extra module (for the annual calendar, in this case). A sapphire case back enables you to enjoy this caliber to the fullest. The blue and marine themes comes back on the rotor, with the anchors and anchor UN logo (in enamel) on the weight mass. A nicely finished movement, using perlage and striping techniques and quite a number of blue screws is a feast for the eyes.

The dial (resembling the marine chronometers that were used on ships) of the Ulysse Nardin Marine Chronograph really stands out in my opinion. The off-white dial and the blue Roman numerals. minute track and printing gives a beautiful contrast. Printed between the ‘V’ and ‘VI’ you will find the wording ‘Grand Feu’, indicating that this technique was used to manufacture the enamel dial. This is being done at Donzé Cadrans S.A. a company that belongs to Ulysse Nardin since 2011. 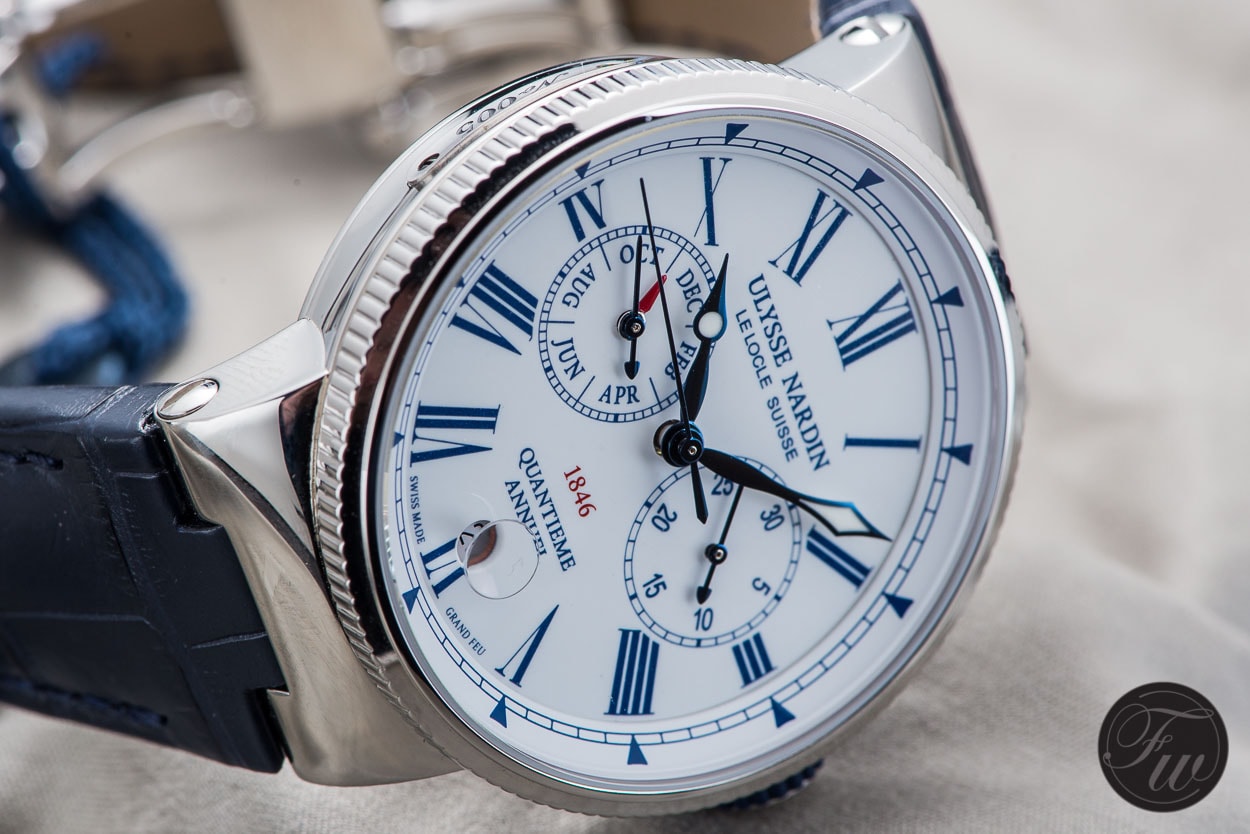 On the dial you will find 6 hands, indicating time, elapsed time and for the month. On the 6 o’clock position there’s a round date aperture, using a small lens to magnify the date disc. Although the dial has a lot of information and ‘tracks’, it is not that cluttered in my opinion. You will find two elements carrying the red color as well. There’s the indication (in red) of the company’s founding year, 1846, and the small triangular shaped hand as month indicator. It brings the dial somewhat more to life even though these are just very tiny elements. The use of blue can also be found on the crown and pushers as well as the alligator strap. 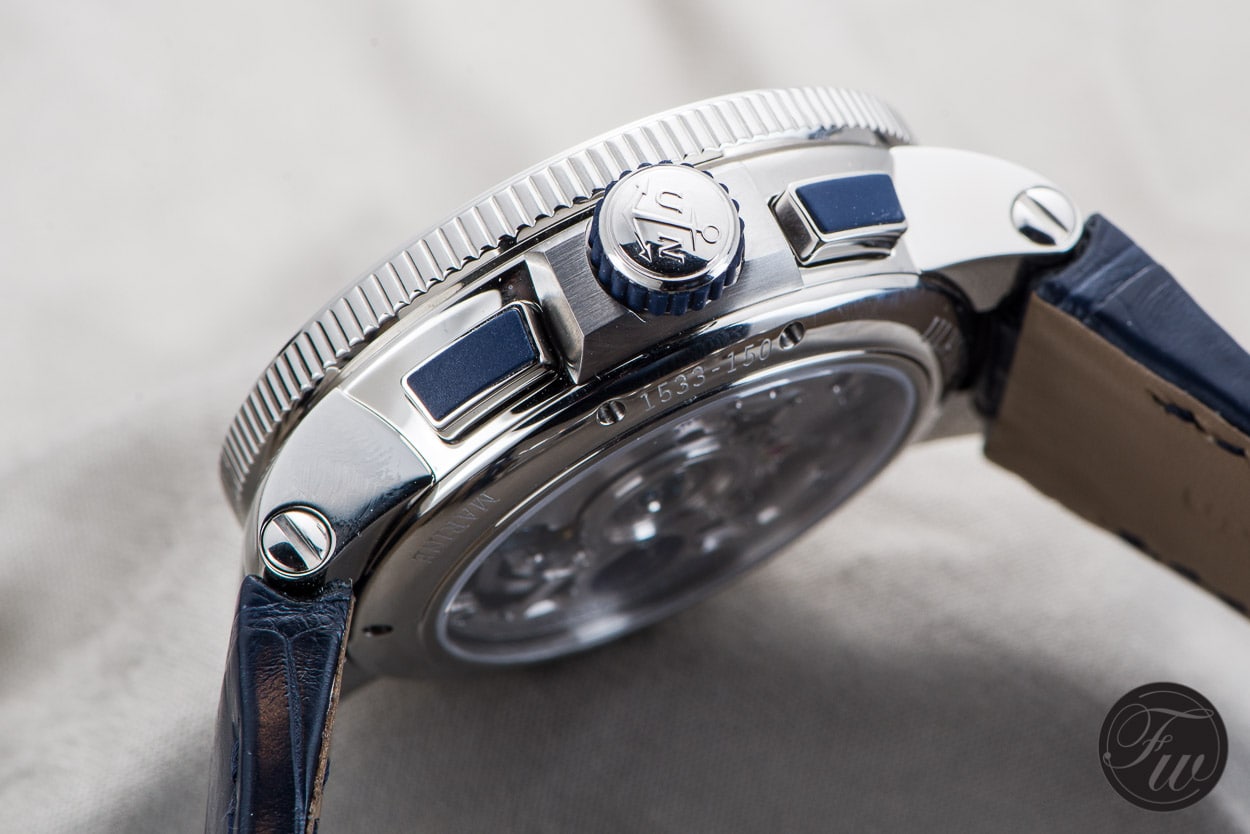 The Marine collection from Ulysse Nardin is not uniform when it comes to case design. Sure you will find the ribbed bezel on these models, but not all models have the typical lugs that this Marine Chronograph has. Somehow they remind me a bit of the lugs of the IWC Da Vinci of the 1980’s, but more masculine looking. It is more like a one solid big lug instead of two lugs. The case shape in general is quite impressive. So is the size, of 43mm. Both polished and brushed surfaces on the case make it a very interesting watch to observe. Last but not least, the ribbed bezel and blue pushers and crown give the watch a somewhat sporty (or marine) appearance. The Ulysse Nardin Marine Chronograph reference 1533-150/E0 is uniquely numbered with a special small engraved plate attached to the case band. The case back is screwed on the case with six small screws. Also, the alligator strap is attached to the case with large screws. 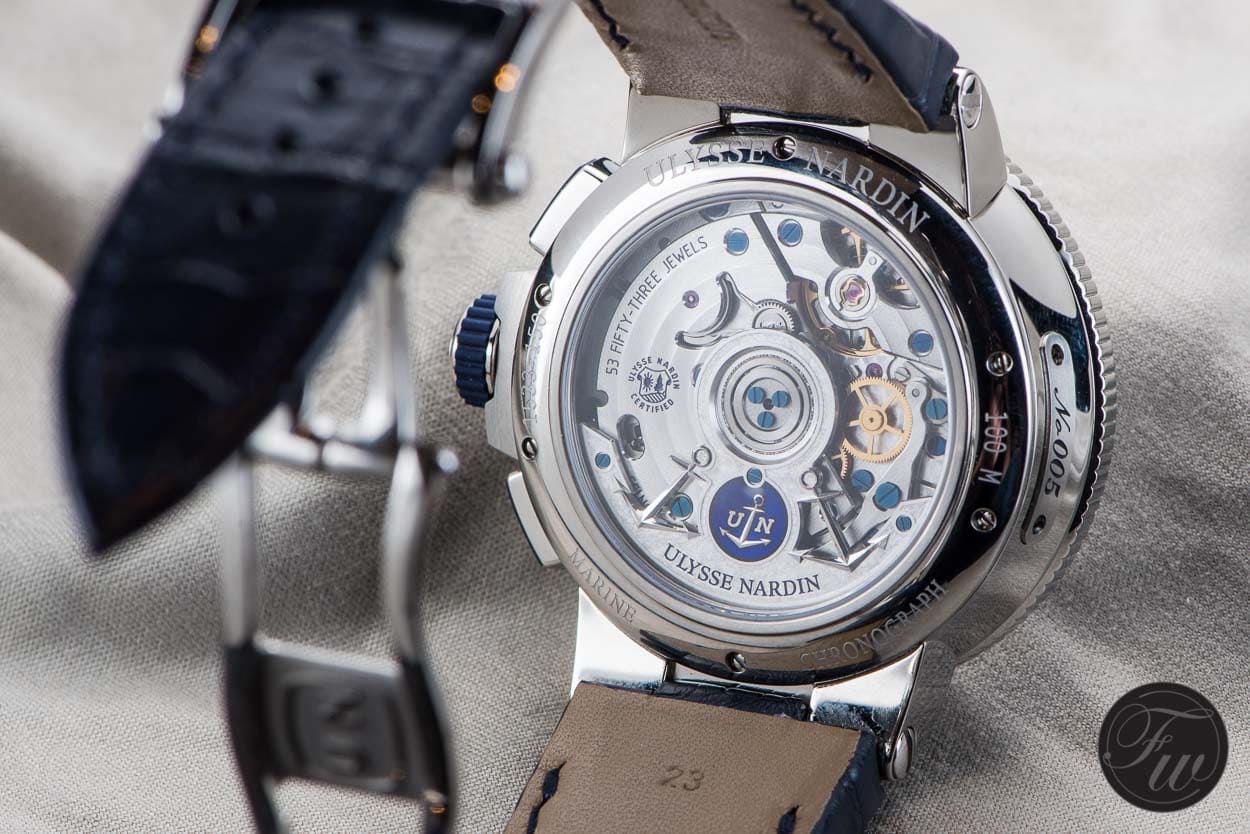 Although a CHF28,000 Marine Tourbillon is quite sharply priced for this complication, a Ulysse Nardin watch does not come cheap. Nor should it. The level of finish is very nice and the number of details make the Ulysse Nardin Marine Chronometer a watch that will not bore you anytime soon. The in-house chronograph movement, including the annual calendar with backward/forward setting, is a pretty piece of technology and the off-white Grand Feu dial makes it a complete package of impressiveness. The retail price of this Ulysse Nardin Marine Chronograph is CHF14,800.-.

Hot Topics
Laventure Automobile Chronograph With A Proprietary Movement — Marking A Huge Leap Forward For One Of The Industry’s Most Promising Brands
155 comments
We Talk To Swatch Group CEO Nick Hayek About The MoonSwatch
79 comments
Fratello Exclusive: An Inside Look At The MoonSwatch Production Facilities
75 comments
Selling Your Watch To A Dealer Or Trading It In — Tips From A Former Watch Dealer
49 comments
Summer Splash — Round 2 : Jorg’s Tudor Pelagos FXD Vs. Lex’s Hublot Big Bang Integral Ceramic Sky Blue
48 comments
Popular
Rolex GMT-Master History And Overview Of All Major References
Robert-Jan Broer
16
An Overview Of All Omega Speedmaster Apollo XI Models
Robert-Jan Broer
17
Two Patek Philippe Nautilus Watches: 3700/1A Versus 5711/1A
Robert-Jan Broer
15