Red is one of the most celebratory features for the Chinese New Year. As we step into a new Lunar year of the Rat, it’s time for a bold creation for good luck and prosperity! The Vault V2+ Red CC is happy to oblige.

The new Vault V2+ Red CC is a piece of mechanical art. It is a unique piece introduced by Vault, as a precursor to their upcoming new range V2. The V2+ showcases the brand’s bespoke capabilities, “which go far beyond the ordinary customizing options.” Two things are breaking new ground here: Firstly, the watch presents a new way to read time, requiring the development of a proprietary movement; secondly, the case is made of a carbon and red ceramic composite formulated explicitly for the V2+.

The undertaking is ambitious. The team behind it are experts in their respective fields. The Swiss independent brand was founded in 2013 by Mark Schwarz and joined by master watchmaker and AHCI-member Andreas Strehler. 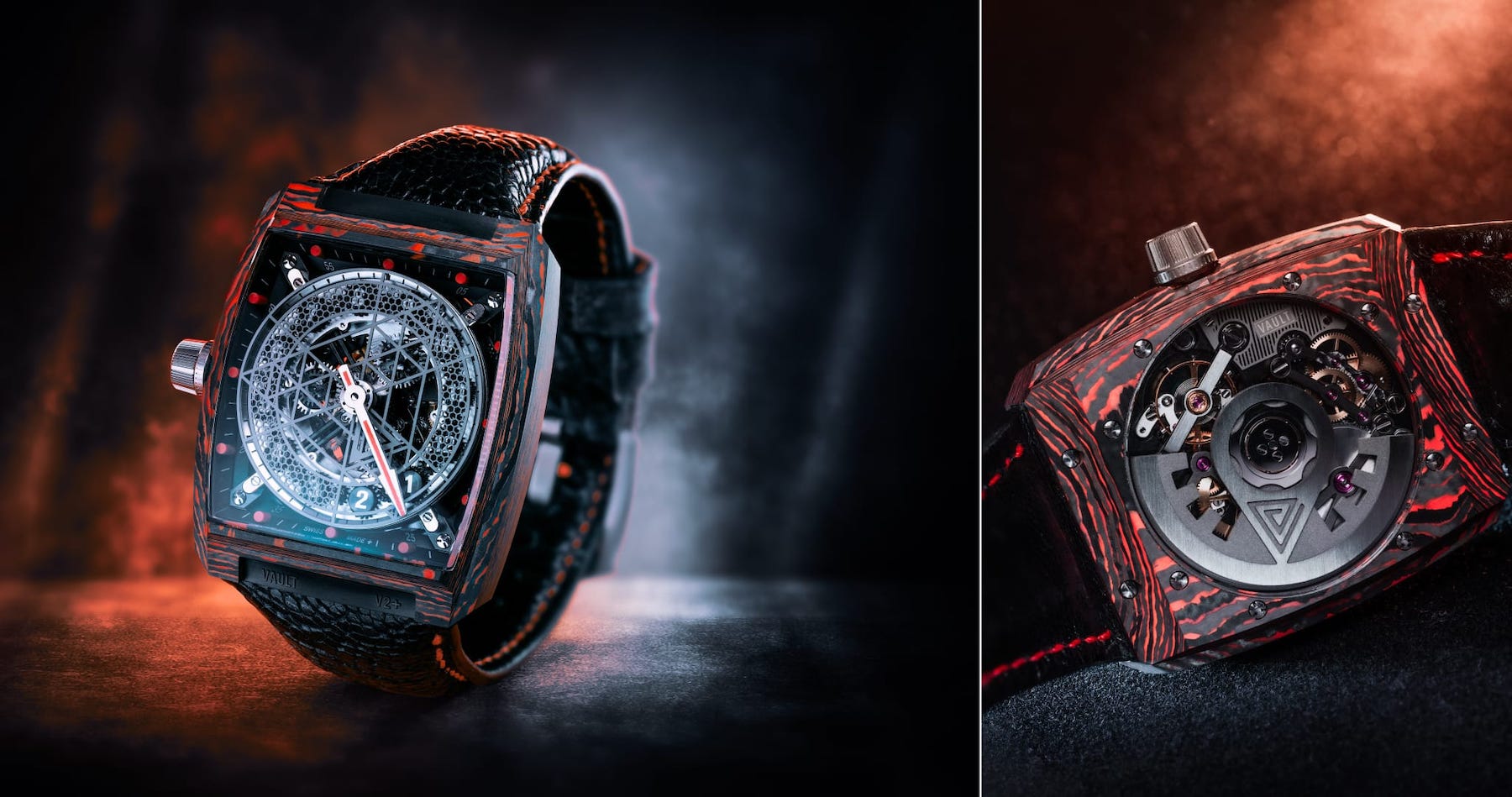 Inspired by the time-lock mechanism in a bank vault (Schwarz is a former police officer and banker), the novel concept of the watch is a time display built on a planetary gear system. Each hour marker is a functioning cogwheel that rotates around the dial while the gears are in motion. With it, the whole movement beneath moves along, as it is actually float-mounted by six steel-rollers and three springs. The gear system kicks into orbit whenever the watch is set. These ingenious mechanics are courtesy of UhrTeil AG, the complication and manufacturing outfit led by Strehler.

The result is that no two watches, even those set to the same time, have the same display.

“The way the time is displayed changes depending on when the watch is set, and in which time zone it’s set. Every watch forms a special bond with its patron [who sets it],” says Schwarz. 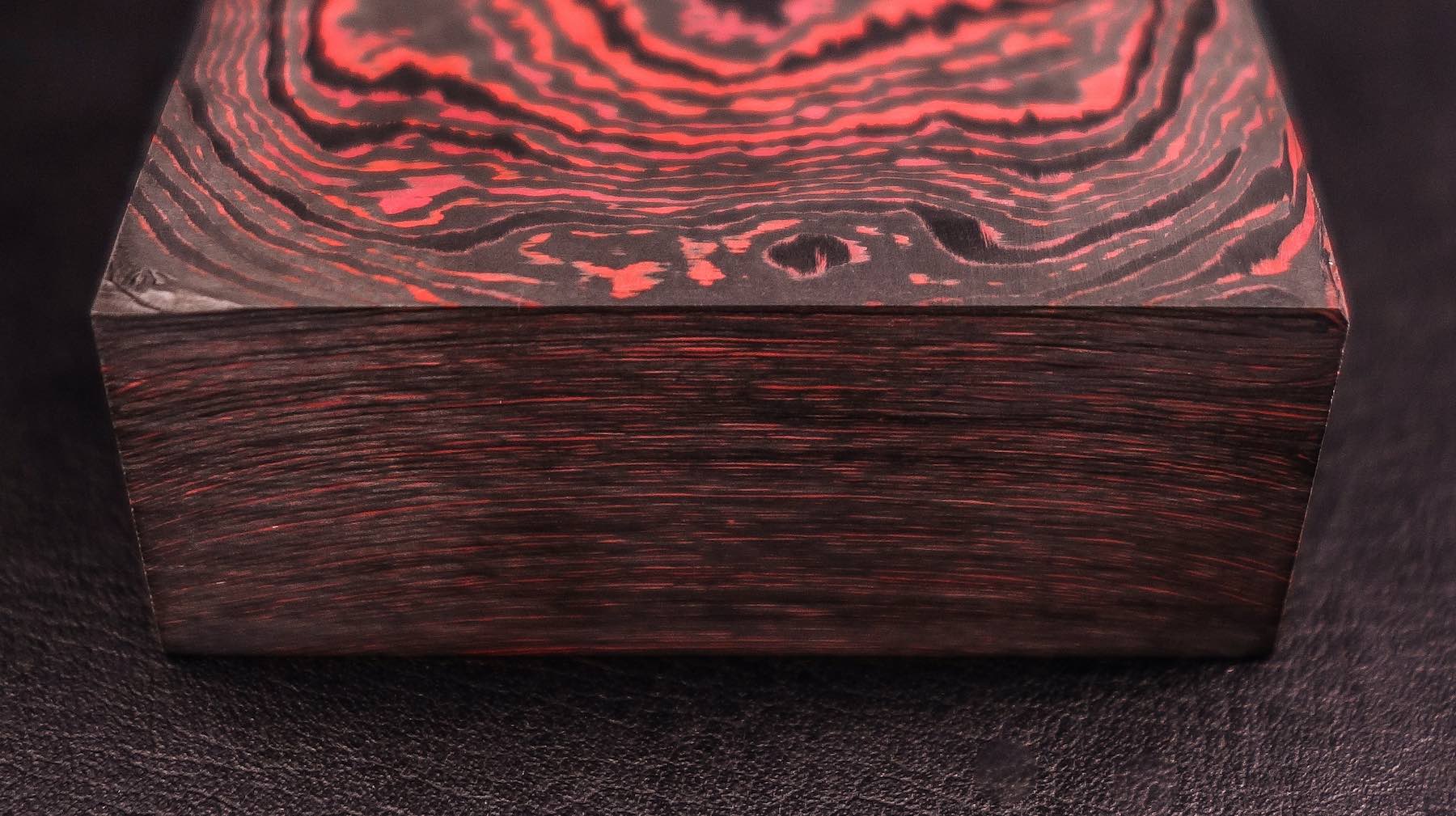 The Vault watch case tapers in both directions, which challenged Vault to create a composite with layers that would mimic the curvature of the case. This required not only tweaking the manufacturing process but also building special tooling to achieve the desired composite. Weeks of hand-laminating layer by layer of carbon and ceramic and numerous iterations later, composite block Nr.21 (aka Red CC for the V2+) was born. It took three attempts and over 120 hours of CNC milling to create the final case. 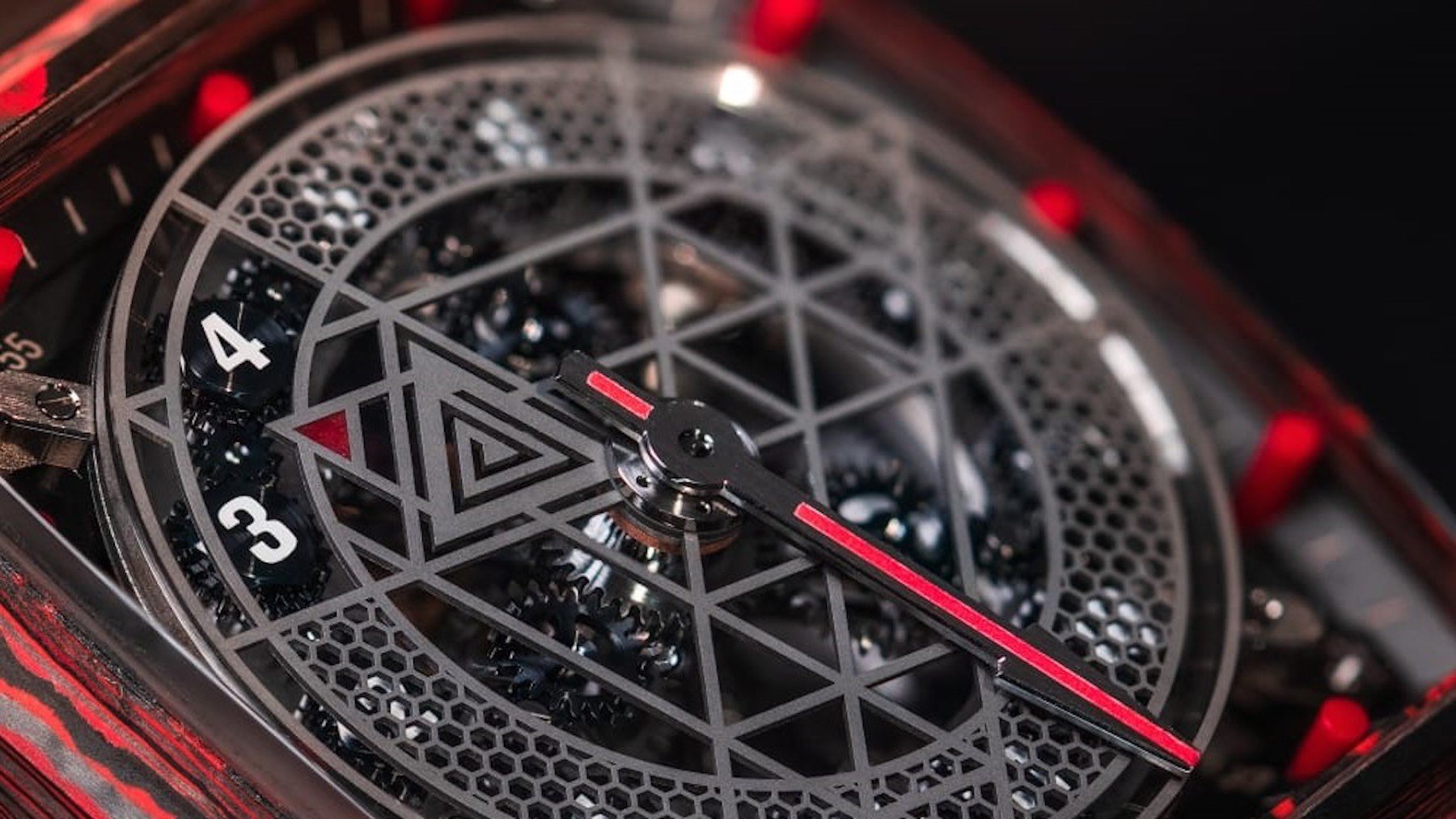 As striking as the appearance of the Vault V2+ case is, a complex dial comprising 133 pieces is more than a match for it. A conventional minute hand indicates the minutes. A mesh disc rotates once per hour. On the disc, a small red triangle points to the passing hours. The team devised this disc based on feedback from the patron who commissioned this mechanical art piece. The disc is laser-cut from grade-two titanium to form a triangular and honeycomb structure, incorporating the signature V-logo and red luminous hour pointer. It makes time indication much more legible despite the intricate workings. 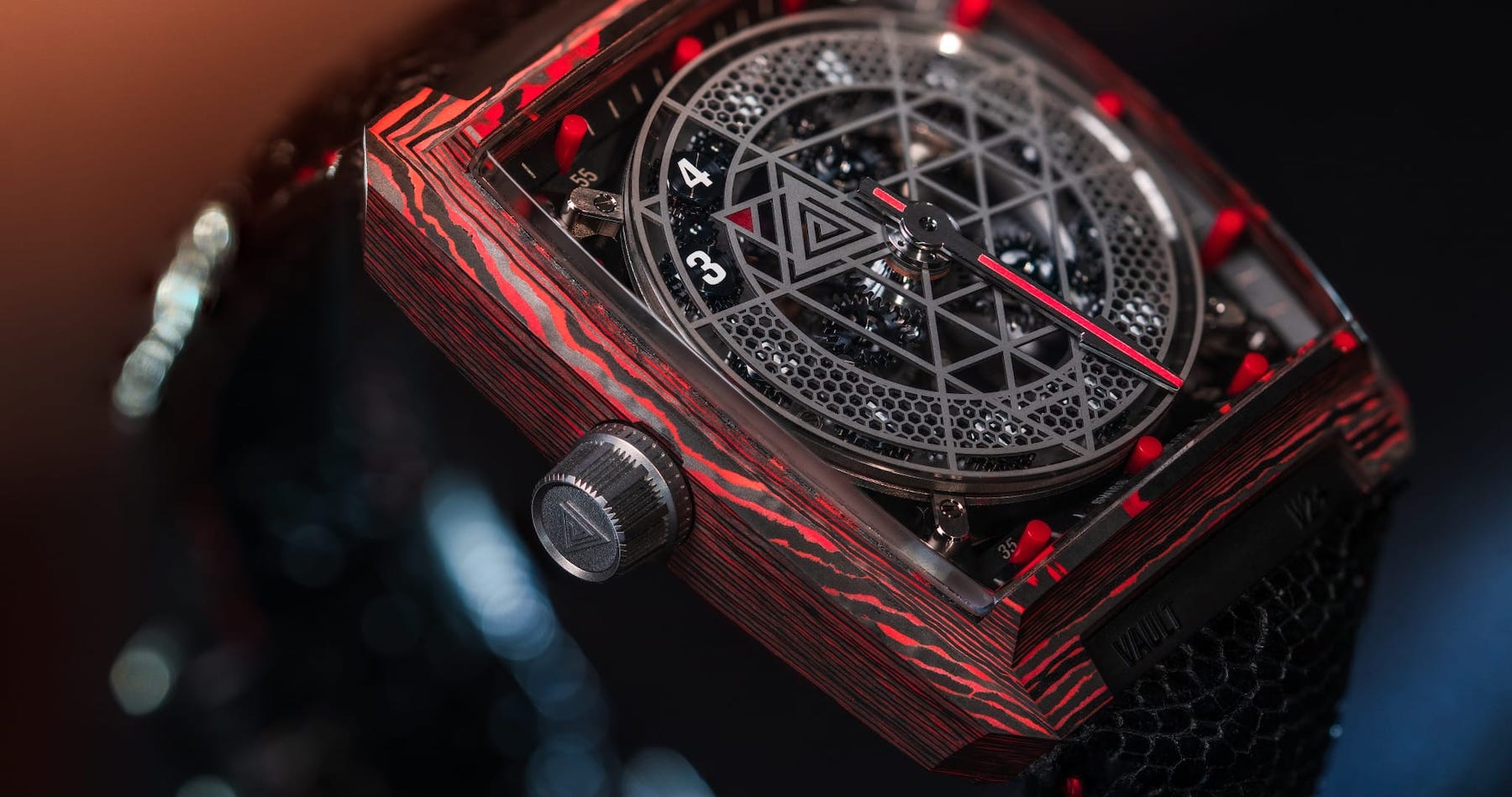 Eagle-eyed readers will have noticed the crown on the left side of the case. Why? Because the Vault V2+ is for a customer that likes to wear their watch on their right wrist. The designers at Vault see themselves as “creators of the world’s most personal watches based on the commissioning process.” Your relationship with the watch is not about time-keeping, but about time itself. “Our movement symbolizes time, as time cannot be manipulated. The same is true for a Vault watch. You can [adjust the time to] change the position of the movement, but you never interact directly with the movement,” Schwarz explains.

The V2+ Red CC is a commission piece with an undisclosed price. Under the V2 range, prices will start at CHF 37,500. To learn more, click here.

Hot Topics
Introducing: The New Seamaster Professional 300M 60 Years Of Bond — With A Special Animated Case Back
105 comments
Are You Still After An Omega × Swatch MoonSwatch?
85 comments
It’s Time To Invest In A Dress Watch — Our Picks From Breguet, Omega, Grand Seiko, And More
72 comments
The Rolex Waitlist Conundrum — How Much Will The Price Of Your Watch Increase While You Wait?
50 comments
The Best Omega Speedmaster Watches Of 2022
40 comments
Popular
Rolex Submariner – Historical Overview Of A Diving Legend
Robert-Jan Broer
22
An Overview Of All Omega Speedmaster Apollo XI Models
Robert-Jan Broer
17
Hands-On With the Seiko Prospex SRPC91K1 – Save The Ocean
Robert-Jan Broer
15