After the Baselworld storm and some other side projects calmed down, I found some time to work on this tasty episode. This time we zoom in on one of the biggest and most bespoke watches of the flower-power seventies: Breitling 1806 Navitimer., a.k.a Fried Egg. To me it’s more a gigantic pan with two fried eggs: 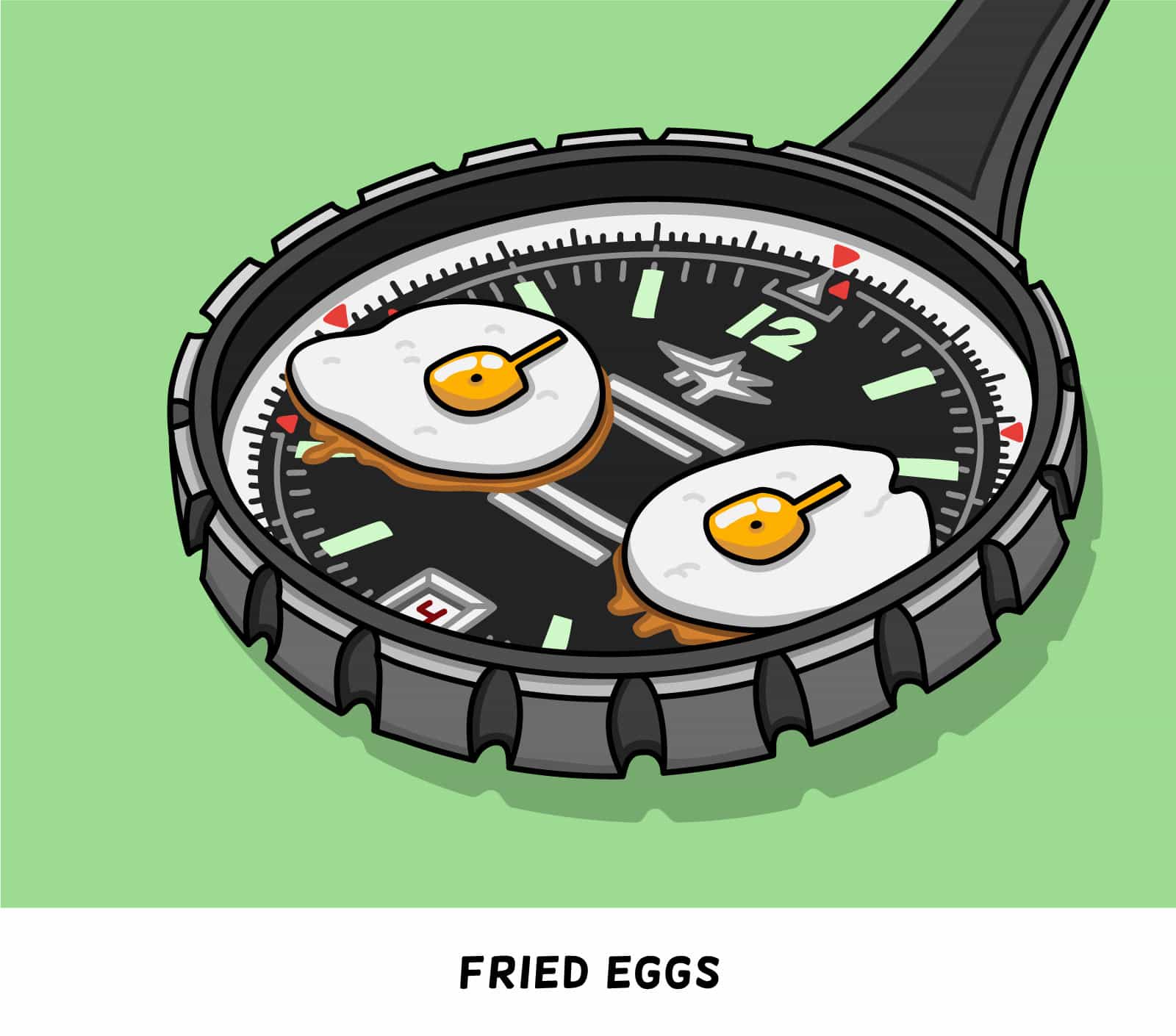 With its 48mm in diameter this octagonal shaped watch was probably the biggest or one of the biggest watches Breitling produced in the seventies. It’s a very technical watch, with lots of measurement functions and a slide rule bezel (more on that in a sec). If we take a look at the dial, there are no less than three subsections/rings to separate the several timing functions besides the bi-compax setup and regular hour/minute/date indicators. To indicate all those functions and remain readability the size makes a bit more sense, but it’s still colossal. Height is not that extreme by the way: 16mm.

The fried egg is powered by the legendary Calibre 11, which is very recognizable by the unusual crown setup. While the pushers are located at the right side, the crown is located on the left. It was the first Navitimer with an automatic chronograph movement. The automatic winding Chrono-matic movement is modular based:  chronograph functions are added to the ‘base’ of the movement. 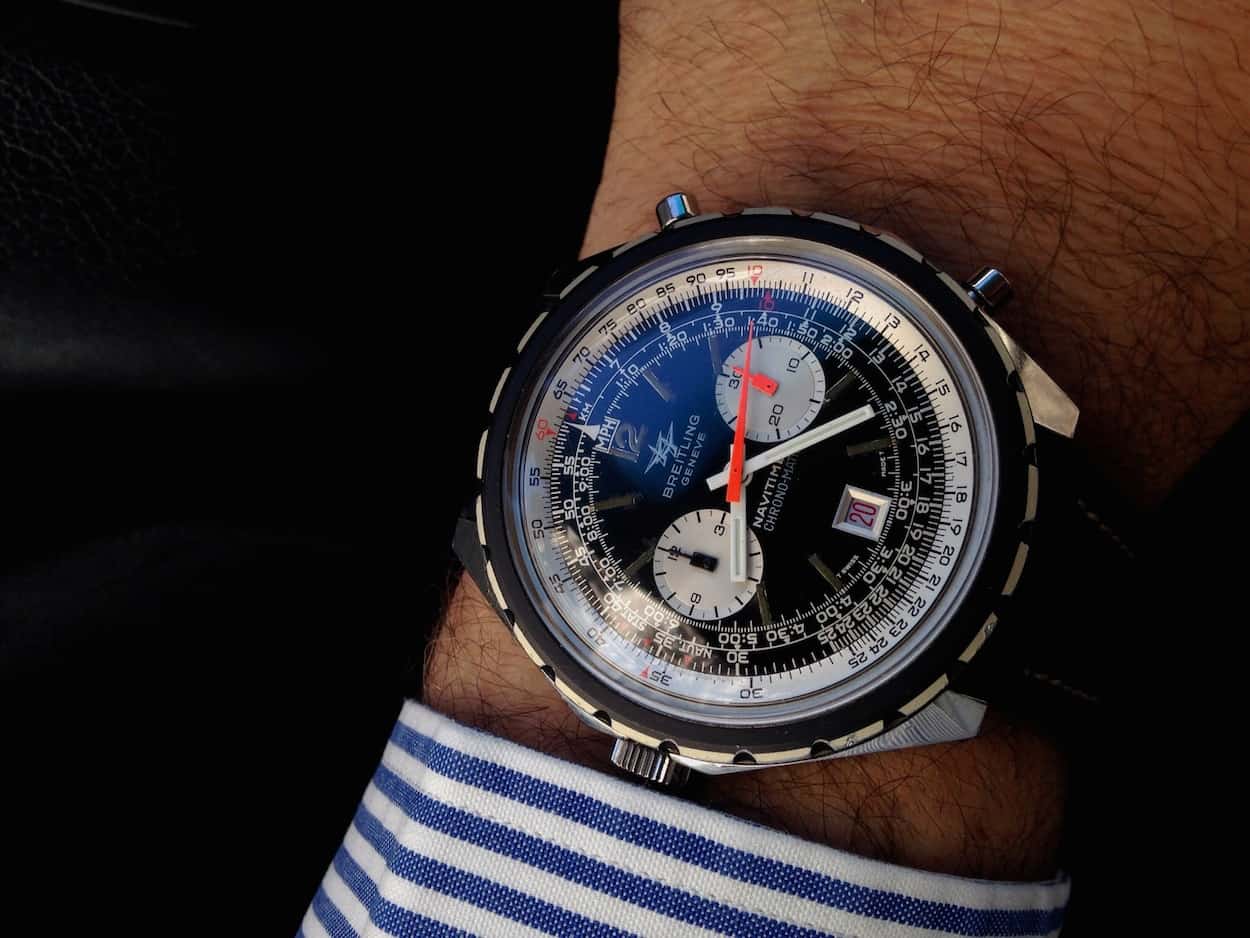 Wristshot of the Breitling 1806 Navitimer Chrono-matic

In the seventies Breitling was part of a consortium. Together with Heuer, Hamilton and Buren they created one of the first Swiss made automatic chronograph movements. Although the Chrono-matic movement of Breitling did beat Zenith by a few days, Zenith still holds on to the fact that the Breitling-version was modular and the true first integrated chronograph movement was made by Zenith (hence the name, El Primero, which means ‘the first’). But, if we look beyond Swiss/European borders, they both were not the first…. While Zenith introduced their movement in January 1969 and the consortium with Breitling a little later, Seiko was actually the first brand who introduced the first automatic chronograph to the market (6139) in May of that year.

After 1968, Breitling introduced a whole new design for their Navitimer-range. Some like to call these first types ‘Big Case’ Navitimers (ref. 816 and 1806). Let’s look briefly at the face of the 1806. The center is formed by basic information and branded by the ‘old’ logo with the dual planes. The model information is somewhat oddly high located compared to the available space between this element and the red colored date at 6. The date attracts your attention by the fat silver frame around the window. Although this window is white, the first batch had windows with black numerals. The hands are very Spartan and together with the vivid orange it creates a functional yet sportive look. On the outside of the dial we find the white scale which can be operated by the slide rule: the trademark for Navitimers. You can measure a lot with this Breitling 1806, for example: gasoline consumption, miles per minute, ground speed, multiply, divide, rate of descent/climb, distance in descent/climb and nautical / statute mile conversion. A true handy  tool for pilots back then.

Besides the consumer-market this watch has been supplied to the air force. Because of all those measurement functions and the gigantic size this watch’ main purpose was to wear it as a practical instrument. The Iraqi Air Force wore the 1806 during the seventies.

I hope you’ve enjoyed this episode and I’d love to hear from you. Until that time: have a safe flight!