We said it before here on Fratello, the people at Louis Moinet are true artists. They use their watches as a canvas to tell the greatest stories. The dial, the case, the movement, every element is part of that story. With their latest series of eight watches, Louis Moinet pays tribute to eight of the most incredible human achievements across the ages. Stating that the results are spectacular is an understatement.

Whenever you get info on a series of eight one-of-a-kind creations, you know you’re in for something special. After releasing the “Race To The Moon” series today, this is may well be even more impressive. This time, the incredibly skilled craftsmen and women at Louis Moinet have created their version of eight remarkable places in the world. As a unique one-of-a-kind box set, they are your ticket to a trip around the world full of discovery and detail with the highest level of craftsmanship.

The inspiration for the eight marvels comes from the travels of Louis Moinet’s colorful owner Jean-Marie Schaller. He personally selected these “8 Marvels of the World” that represent artistic diversity and honor the different cultures that created these eight marvels over time. 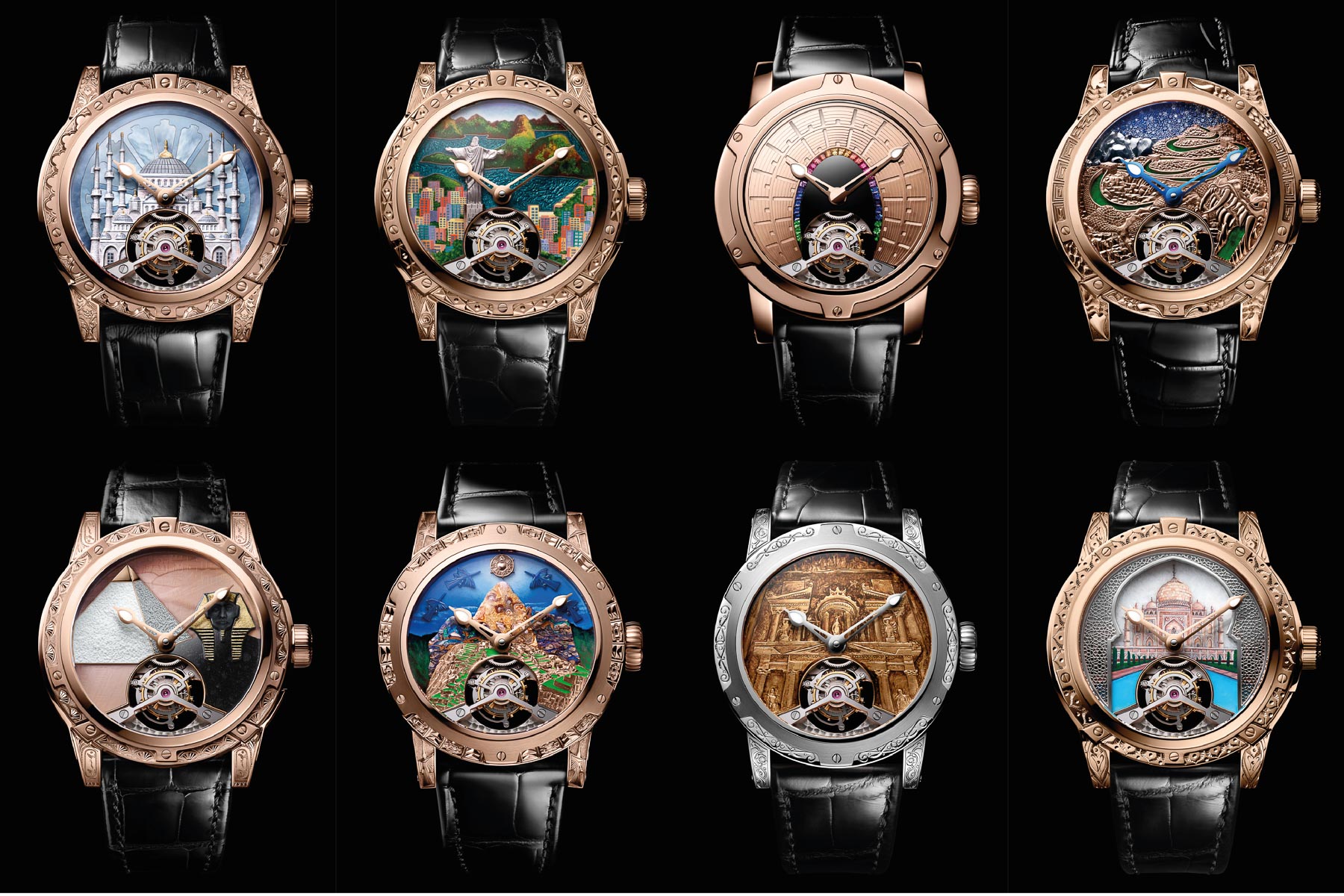 The canvas for the 8 Marvels of the World

The canvas for the eight masterpieces is a series of eight 47mm watches, all featuring a gold case. While seven of them have a rose gold case, there is one that features a white gold case. I’ll explain why in a little bit when we get to the different marvels. Powering the eight watches is Louis Moinet’s award-winning Caliber LM35 that was awarded First Prize in the International Chronometry Competition. This hand-wound tourbillon movement operates at a frequency of 21,600vph. The movement has 19 jewels, a power reserve of 72 hours, and shows hours, minutes, and seconds. 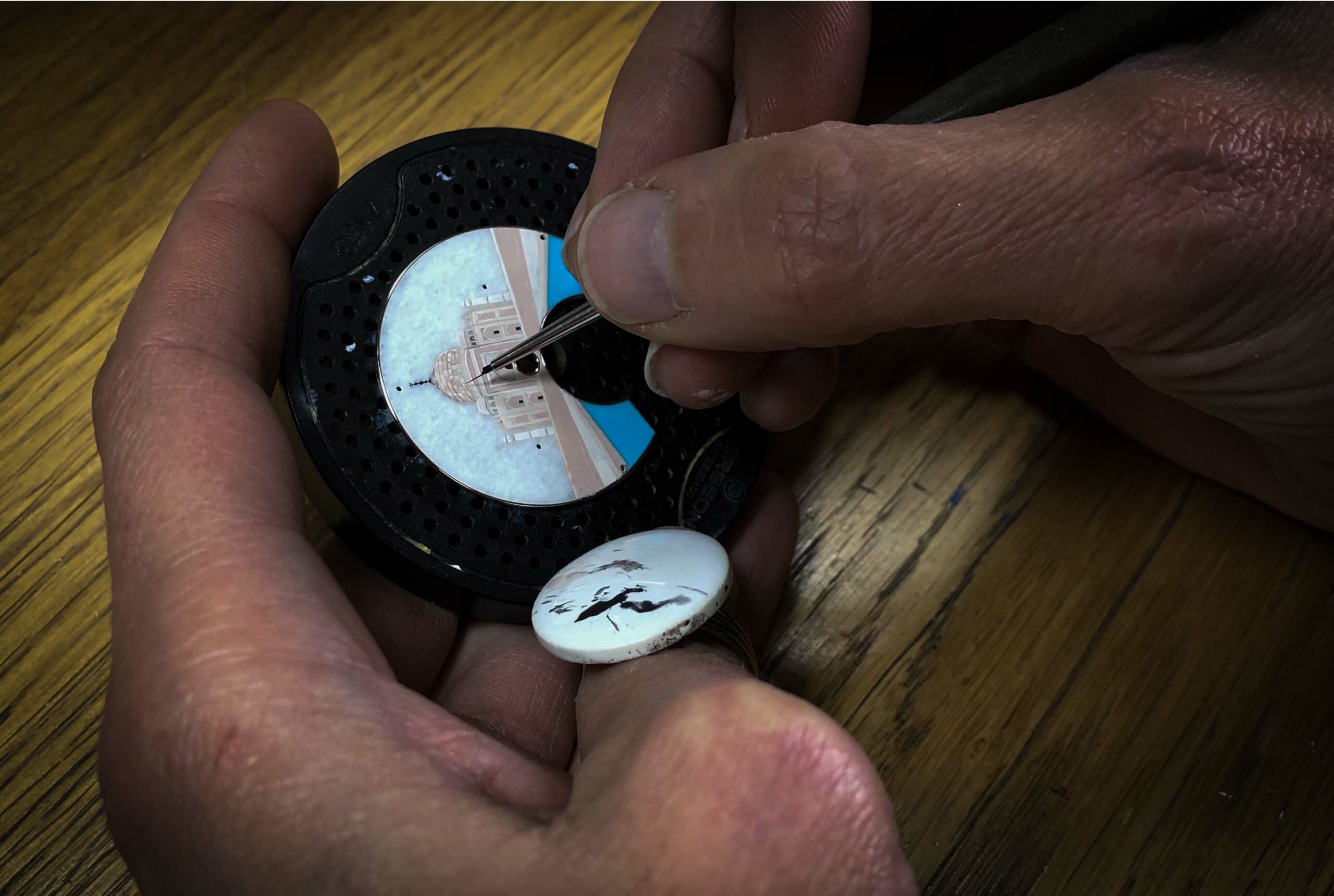 While the case and the movement are already impressive, they serve as a canvas for this series’s true magic. The team at Louis Moinet has used a series of unique techniques and materials to re-create their version of the eight different places in the world. But where most brands use the dial as the storyteller, Louis Moinet takes it one step further. The brand is also a master in using the case as a crucial part of bringing the story to life. While some of the results on the Race To The Moon series — which was also announced today — were impressive, this series takes it one step beyond. So let’s take a look at the eight pieces. 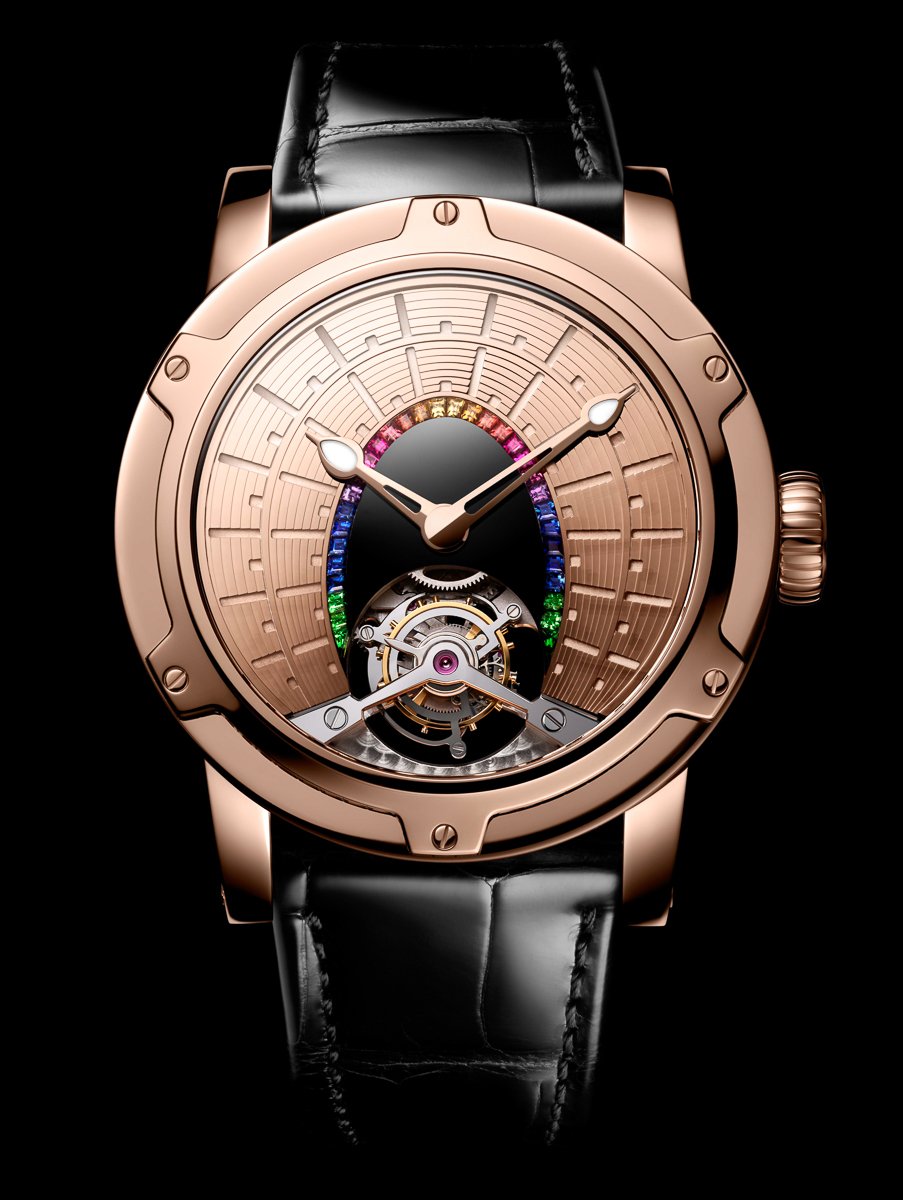 The first piece of the set is The Colosseum, and it is probably my favorite piece out of the eight in the set. The team at Louis Moinet has used the dial and the side of the case to re-create the actual Colosseum in Rome on a watch. It’s crazy to see what they have come up with. The inside of the dial features a depiction of the Colosseum in the heyday of the Roman Empire.

The center of the arena is created from black onyx. A symmetrical array of baguette-cut sapphires surrounds it. Around the sapphires rising gradually are the rows of seats. As you can see, the detail level is stunning with the finely detailed and polished steps of the Colosseum. They contrast perfectly with the other parts that are sandblasted.

While the dial is already impressive, the side of the case is even more spectacular. It shows a total of 112 arches in the case middle and an additional 90 for the bezel. All of them are engraved in a rose gold case. The uniquely shaped lugs fit perfectly with the depiction of the Colosseum, creating a spectacular piece that can only be described as pure art. After seeing the images, my first reaction was a genuine “wow!’. 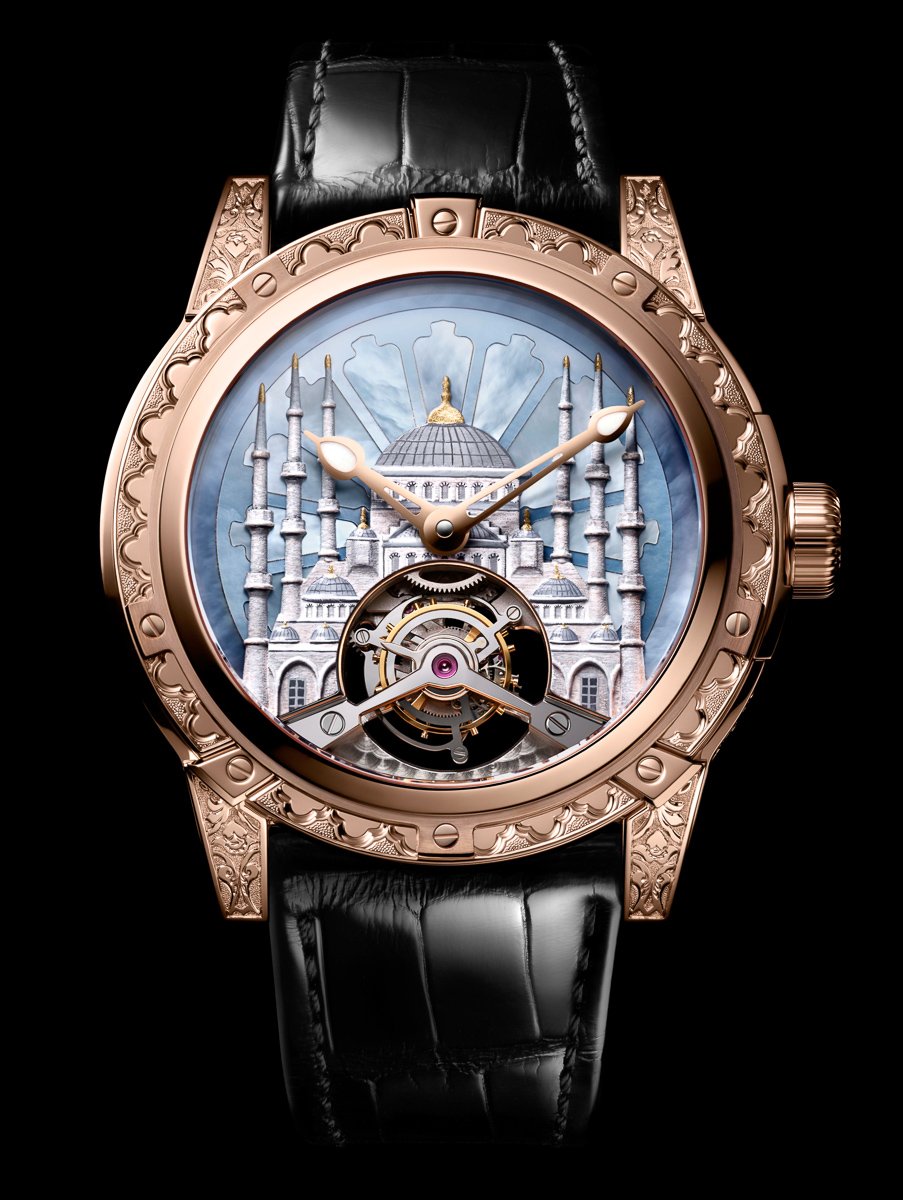 The second piece is a depiction of the famous Blue Mosque in Istanbul. The iconic landmark has been re-created using a mother-of-pearl inlay consisting of 13 elements in different shades of blue. The background represents the motifs of the ceiling that decorate the interior of the Mosque.

The case is entirely hand-chased and features an ornamental motif with complex interlacing patterns that represents an arabesque. It’s an essential element of Islamic art. 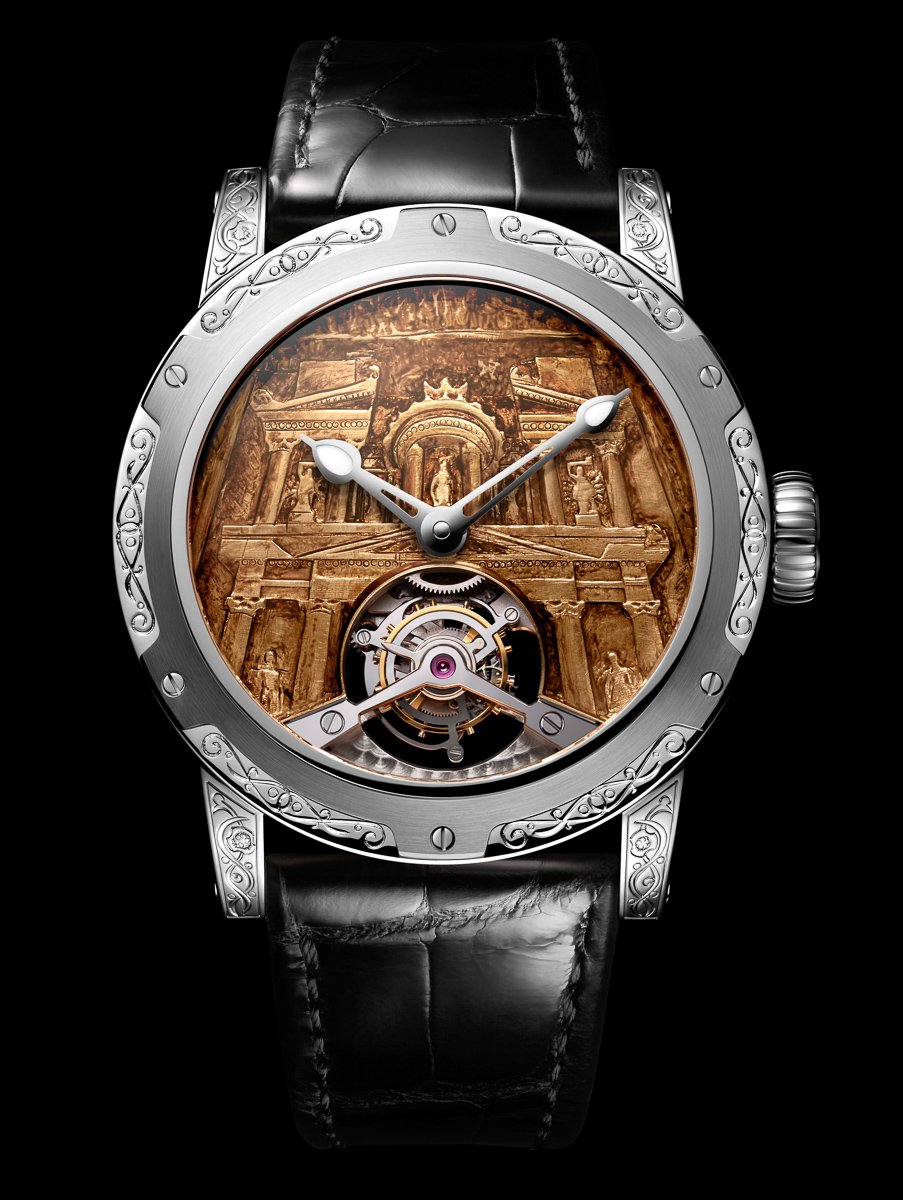 The odd one out when it comes to the cases is Petra in Jordan. This piece features a white gold case to create an incredible contrast with the depiction of the famous city of Petra. The depiction is actually the famous Khazneh building. Its monumental facade was carved into the rock face and recreated with a unique combination of three different techniques.

It starts with bas-relief engraving for a depth effect. The second stage consists of applying the grisaille pictorial technique, using only shades of the same color. For the final step, the fresco painting technique is used to create extra detail, and it adds extra color pigment. The results are a stunningly detailed depiction of the famous building.

The side of the case and the lugs feature depictions of columns and elephants – symbolizing strength and wealth – are drawn from across the entire Petra site. After seeing the side of the case is impressive, but you would have no idea how great the contrast with the dial is. 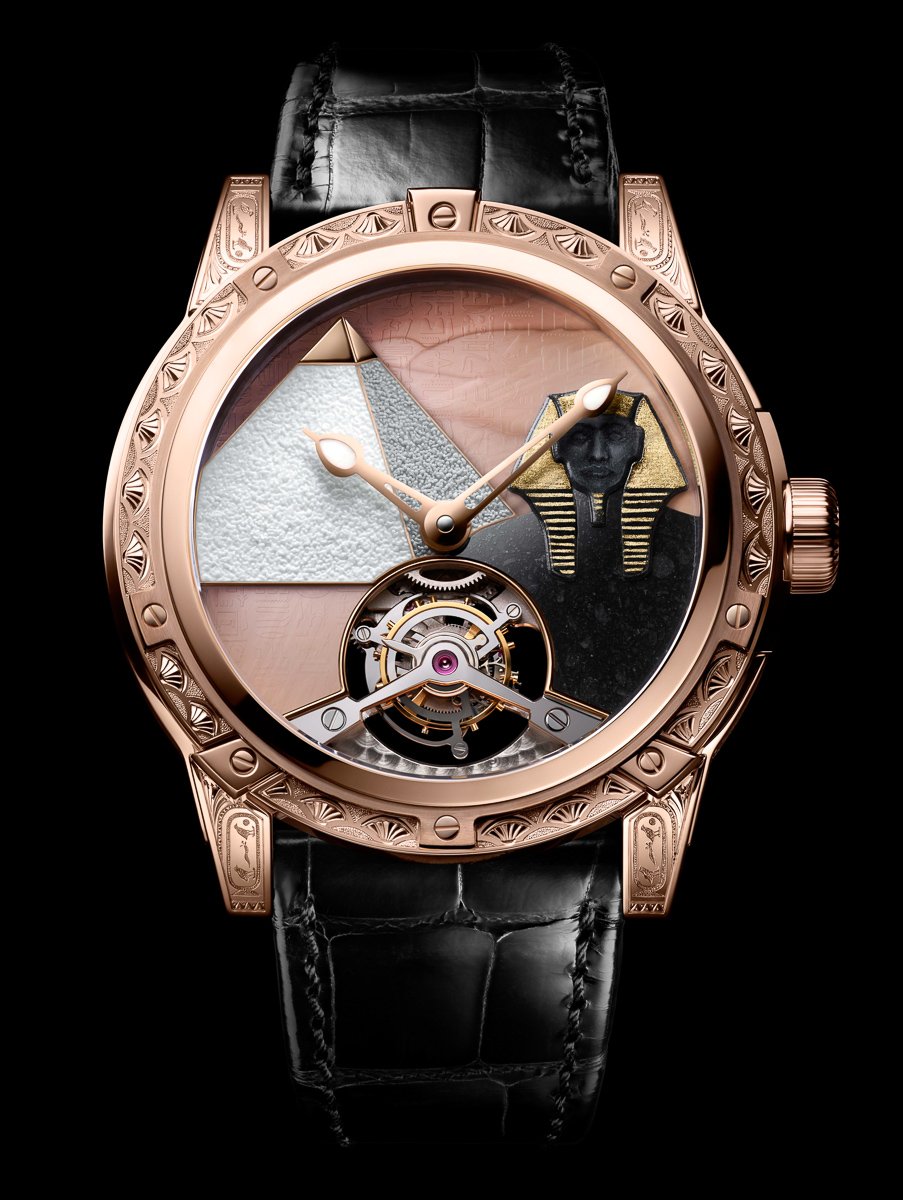 Another impressive piece is the Pyramid of Khufu. The dial of the watch is cut from a block of Willow Creek Jasper. It’s a natural stone whose design is reminiscent of the sand dunes of Egypt. And look carefully at the image, and you will see that the dial features applied Hieroglyphics. A spectacular detail.

The actual pyramid is made of gold and covered with grains of enamel. The so-called pyramidion or capstone is created from electrum. It’s an alloy made from gold and silver that the ancient Egyptians already used. The carved capstone is given a mirror polish for maximum impact.

The side of the case features a depiction of the lotus flowers adorning the tops of Egyptian columns. They are engraved using the so-called taille de joue technique. On the lugs, you will find the Khufu’s cartouche. 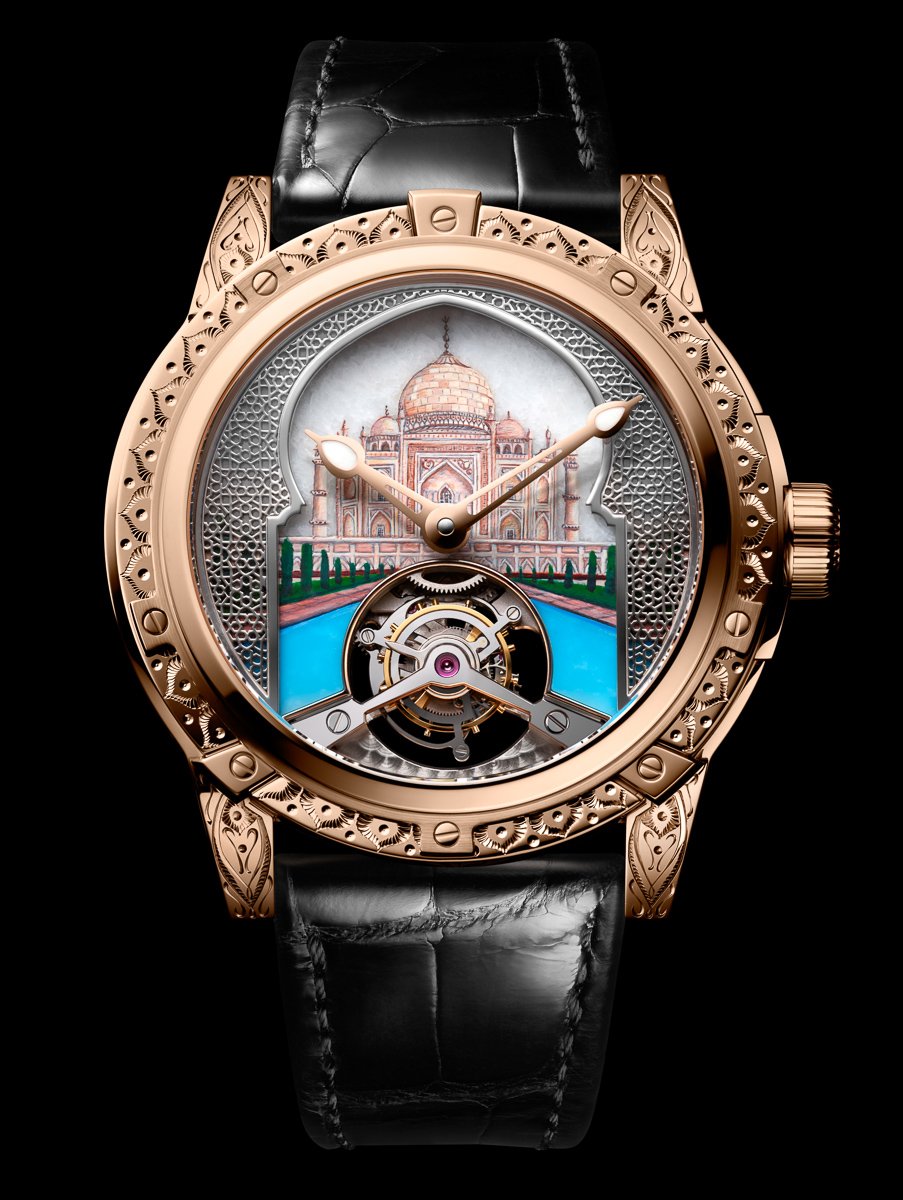 The famous Taj Mahal in India is created by a miniature painting on a white marble dial. As you can see, the building is re-created with part of the garden and the water in front of it to create a colorful image. On top of that, a polished and rhodium-plated grid is affixed to the dial for greater depth. Also, the ornamental motifs refer to the so-called moucharabieh windows that are found in traditional Indian architecture.

The case is hand-engraved and features a representation of Indian mandala patterns and the Taj Mahal. The bezel features an engraving of a Mughal motif. 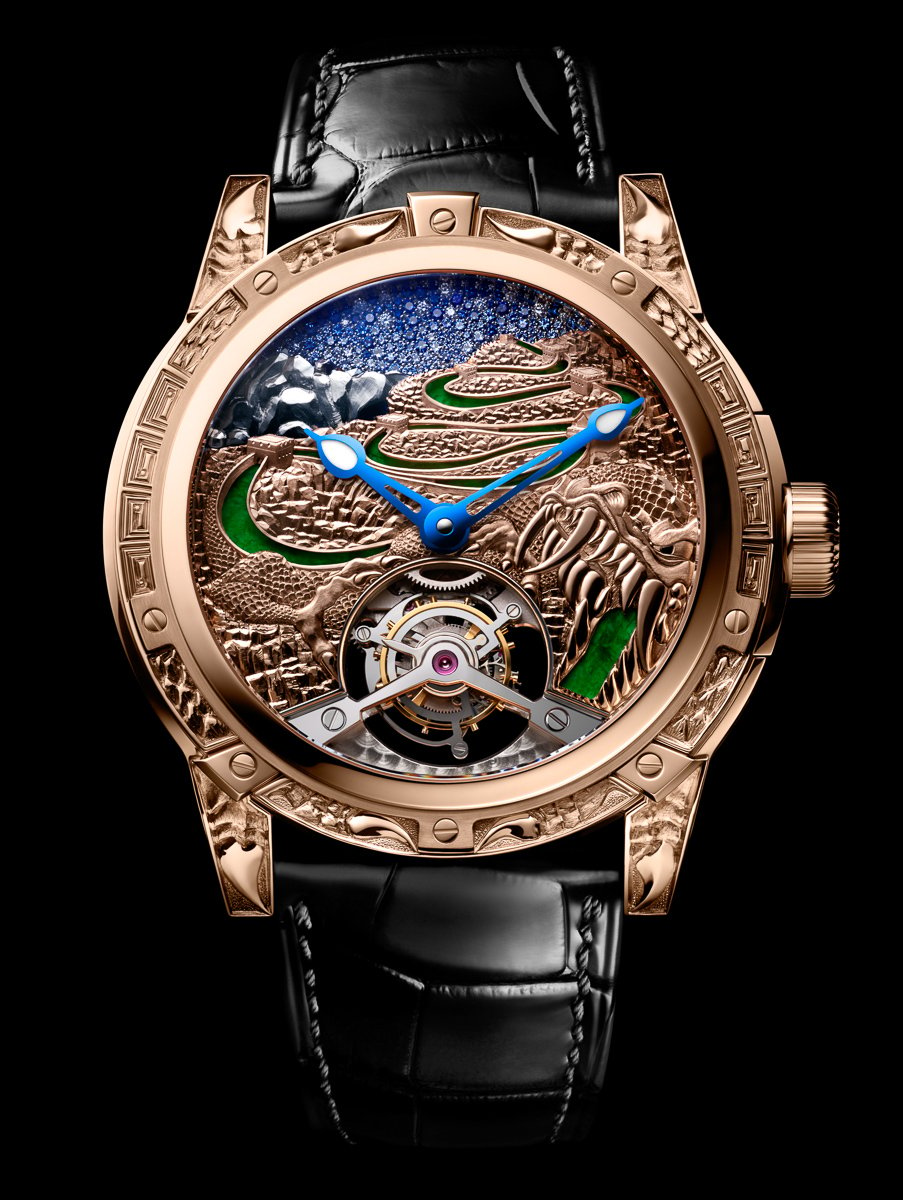 How do you re-create the 6,200 kilometers long Great Wall on a watch? The answer, as it turns out, is rather ingenious. You combine the Great Wall with the Chinese dragon. First, the watchmakers started by hand-engraving the image of the wall and the dragon in rose gold. After that, the path of the dragon is depicted in green jade. Thirdly, the celestial vault in the back is created from 129 brilliant-cut sapphires and 11 brilliant-cut diamonds. Lastly, you will find the distant mountain, appearing as a hand-engraved white gold applique. As a result of using different materials, there is a great sense of depth or height created.

To complete the story, the team at Louis Monait has hand-engraved the case with the dragon’s story. The case middle, bezel, and lugs all have detailed engravings of parts of the dragon. As a result, the watch is a combination of China’s Great Wall and what is probably one of the most powerful Chinese symbols. 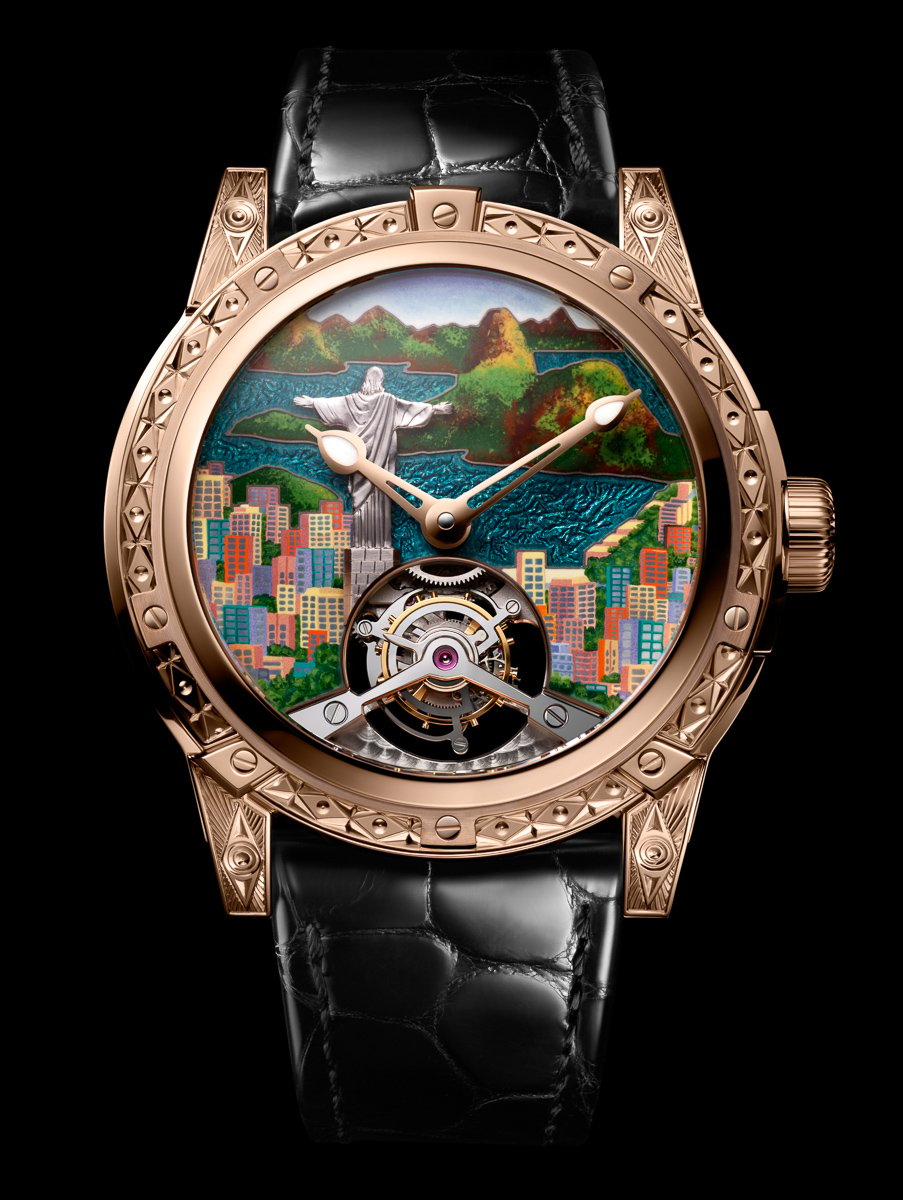 Probably the most colorful out of all the eight watches is Christ The Redeemer. As a result, it is a piece that stands out. On top of that, the engravings on the rose gold case are some of the most lively in the set. The statue on the dial was hand-engraved in gold with a relief applique. It faces a beautifully colored sea whose floor is hand-engraved and then enameled in translucent azure blue. Additionally, the mountains in the background are also glazed in opaque Grand Feu enamel.

In order to bring more life to the dial, the team used enameled micro-painting to depict the town’s multicolored buildings. The various enameled elements are based on the champlevé technique, which removes a little material to apply the enamel. The results are a vibrant and colorful dial that fits the Brazilian nature of the watch perfectly.

As I mentioned before, the case features some of the most lively engravings out of all the pieces. They depict coffee leaves and tobacco leaves, the decorative elements of the Brazilian coat of arms. The elements accentuate the power of Christ the Redeemer and of Brazil itself. 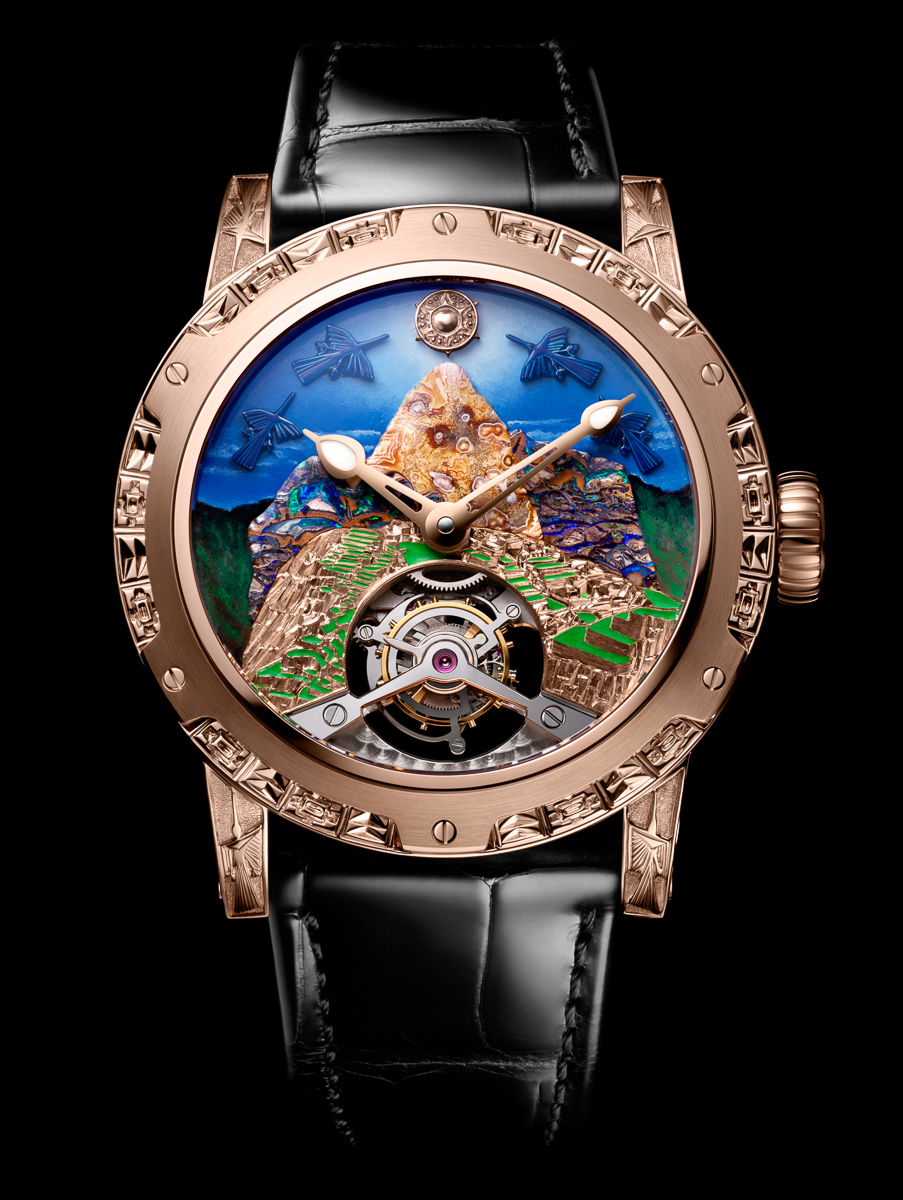 The last unique piece in this “8 Marvels of the World” set is the Machu Picchu. It features a hand-engraved golden sun that shines above the site of Machu Picchu. As you can see, all the elements converge towards the sun embodying the Inca culture’s spirituality. The depiction features four Andean condors in the sky. They are a true national symbol of Peru.

Meanwhile, Machu Picchu’s site is created from gold and sits at the foot of the two colorful mountains. They are cut and carved from Yowah Nut opal to bring the mountains to life and surround the central stone in Crazy Lace Agate. Finally, the iconic terraces featuring a distinctive farming system are enhanced with green lacquer.

The rose gold case features hand-engravings of the sun at 12 o’clock and 6 o’clock. They are surrounded by the hummingbird and the condor from the Nazca Geoglyphs. As a result, the finished watch tells the unique story of one of the world’s most iconic landmarks. 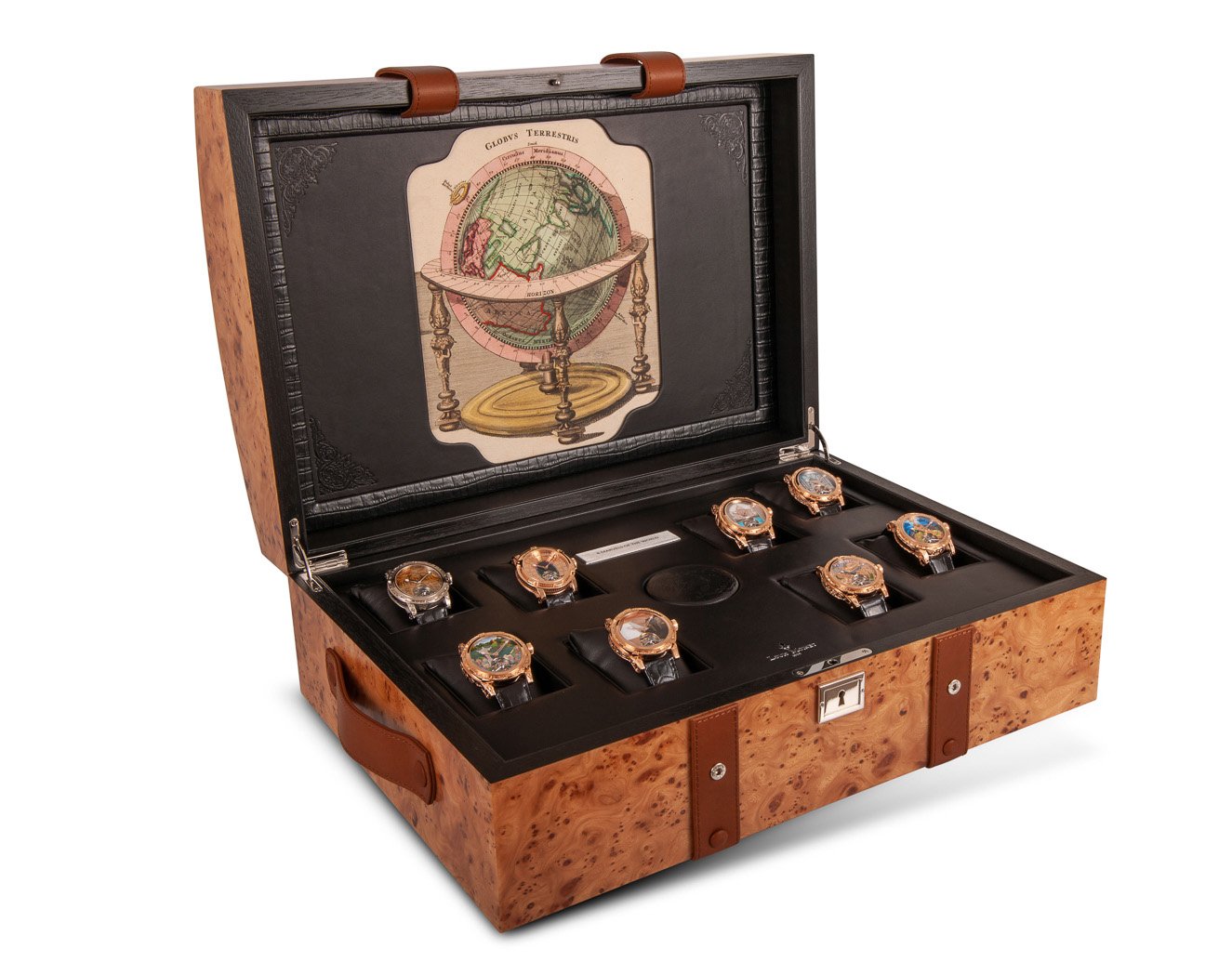 After seeing the images and reading about the incredible craftsmanship that created this unique set, I have to say the team at Louis Moinet created something amazing. This is obviously not just a set of four incredible watches to wear on a weekday. This set is a work of art for one lucky collector that will probably keep them safe at all times.

But in this day and age, would it not be a nice challenge for the collector to create wrist shots of each of these timepieces with the actual site or building in the back. While that will never happen, of course, this one-of-a-kind box set could be the inspiration to visit all eight marvels of the world. 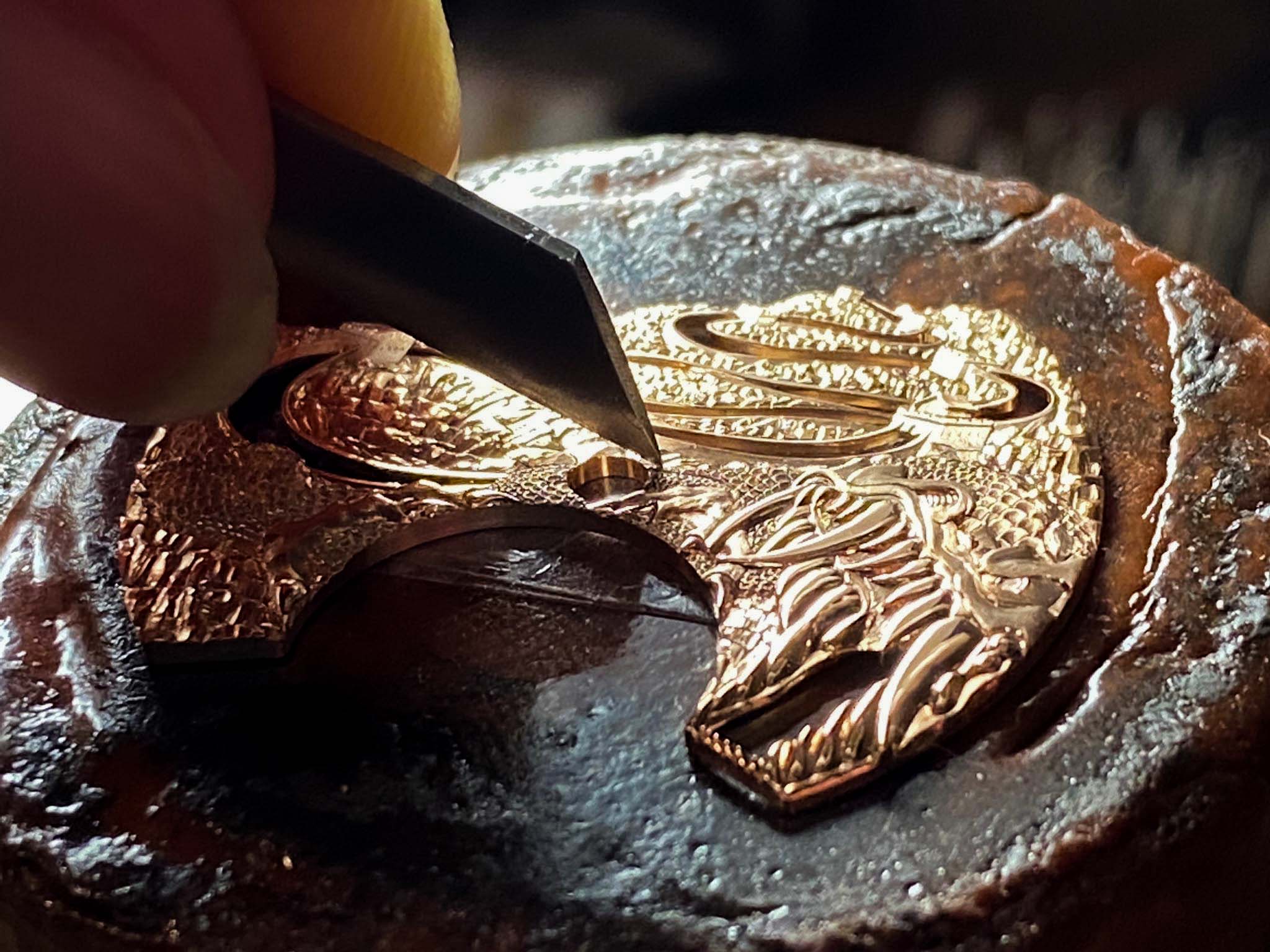 A unique set, a unique price

The “8 Marvels of the World” set comes in a specially crafted travel trunk made of natural elm burr and adorned with a silver-colored Fleur de Lys pattern. On top of the domed cover, you will find two cognac-colored leather straps. The inside of the trunk is made of black leather, with the inside of the cover featuring an 18th-century treasure: a globe drawn by Johann Gabriel Doppelmayr.

It perfectly completes the unique concept of this unique box set. One lucky collector will be able to buy this one-of-a-kind “8 Marvels of the World” set for a stunning price of CHF 2,500,000. While stating that is a reasonable price, is a bit nonsensical. But seeing the amount of time, the incredible materials, and the levels of craftsmanship that went into making this set, I would have always expected it to be costly. But I guess that the future owner of the set will gladly pay its price. Because by doing so, he or she gets an incredible set of watches that are nothing short of being pure art,