How Watches Work: What Is Timascus?

So you’ve heard of Damascus Steel, but what on Earth is Timascus? It’s not exactly the most commonly known or used material. Still, its underground, cult-like popularity in the circles where it is known makes it interesting. With its brightly colored, acid-trip-like aesthetic, I can see why some people adore it. So, let’s take a look and find out what it is.

Whereas Damascus steel is a general term given to pattern-welded steel alloys, Timascus is a trademarked brand name. Broadly speaking, we are talking about a titanium version of Damascus steel, with different titanium alloys pattern-welded together. Timascus is a simple portmanteau of “Titanium” and “Damascus”. The term “Timascus” is slowly becoming a genericized trademark similar to Sellotape, Velcro, and Google. To try and recap: all Timascus is a type of titanium Damascus, but not all titanium Damascus is Timascus. Got it? It’s a little confusing, isn’t it? It’s like what they used to tell us in geometry lessons: all squares are rectangles, but not all rectangles are squares. 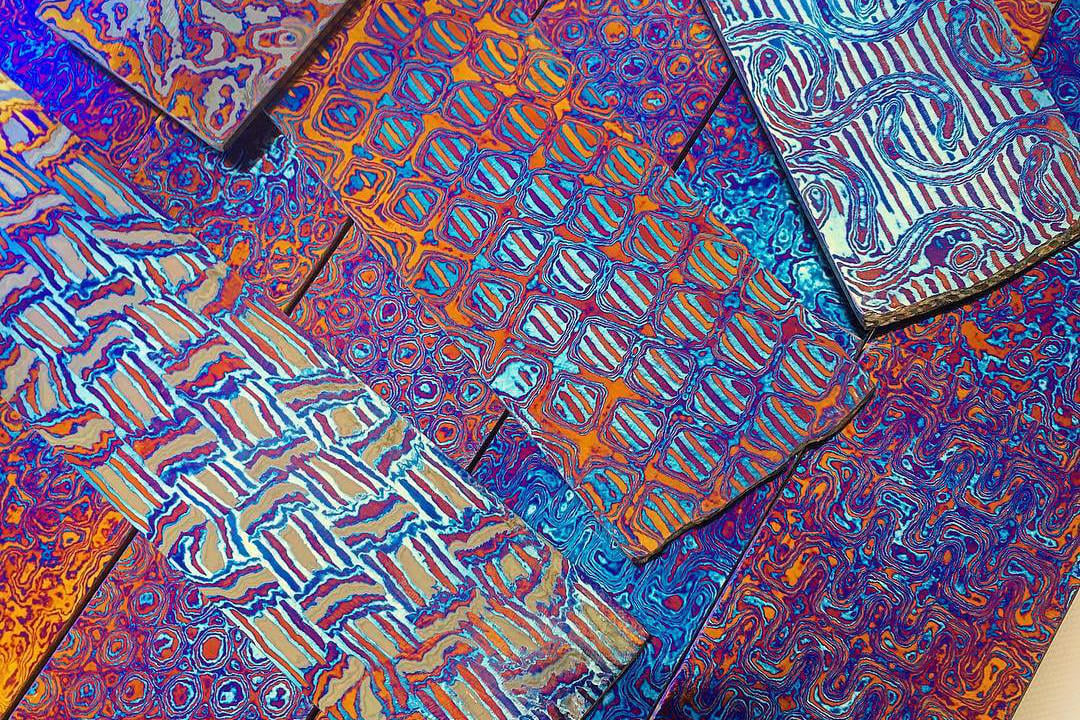 Timascus and its friendly origins

It was a talented group of bladesmith/metalsmith friends who initially created this innovative material — Tom Ferry, Bill Cottrell, and Chuck Bybee. Bybee first theorized the concept of a titanium-based Damascus and spoke with Tom Ferry about the idea. On his website, Ferry said, “Chuck sprung the idea of a titanium-based Damascus on me numerous times at different shows and venues. The discussion always ended with me saying that I doubt it was possible to create.” Quite the literal doubting Thomas!

The theory was that a titanium-based laminate material would be lightweight, non-magnetic, and non-corrosive. At this time, Ferry and Bybee theorized that each titanium alloy would color or anodize at a different rate, thereby giving a contrast in the final patterns. 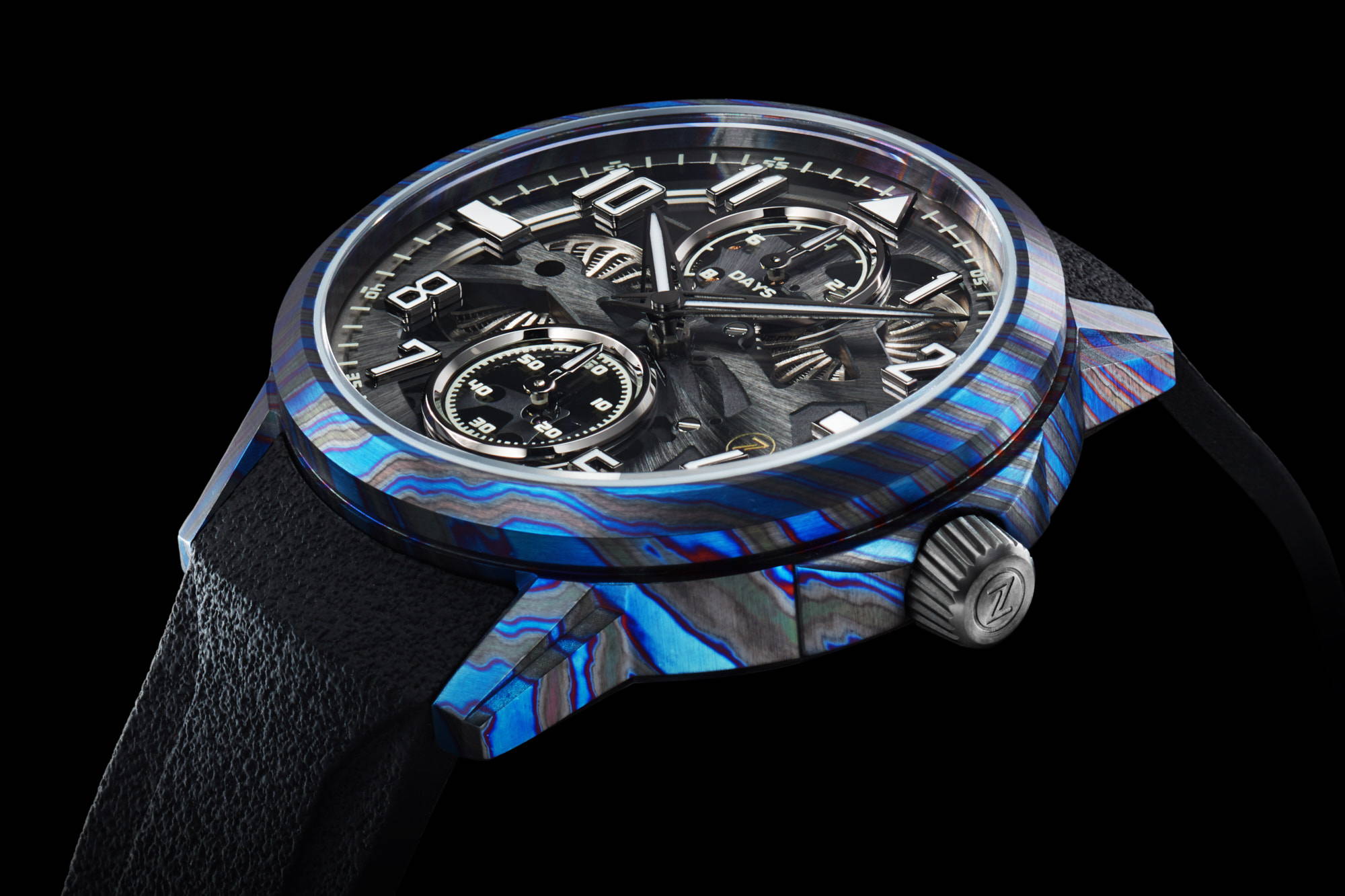 Thankfully, curiosity got the better of Ferry. He decided that he simply had to experiment with Bybee’s concept to know for sure. But as with any great success story, there were several failures. This included one catastrophic incident that sent liquid titanium spraying all over his workshop, partially setting it ablaze. After weeks of research, Ferry approached his friend and fellow metalsmith, Bill Cottrell, for his counsel. Together, they developed and patented the process — US Patent 6,857,558, in case you were wondering. Subsequent experiments led to a refining of the process and the development of other patterns. Much like you can source Damascus steel in different organic, structured patterns, the same goes for Timascus and titanium Damascus in general.

So, much like Damascus steel, Timascus (titanium Damascus) consists of two or more alloys laminated and patterned-welded together. Timascus uses commercially pure (CP) and 6AL4V (commonly known as Grade 5). Whereas Damascus steel requires acid etching to bring the patterns to life, Timascus most commonly uses heat or anodizing. The official Timascus mix of CP and 6AL4V alloys seems to show more color contrast through heat coloring than by anodizing. Highly polished finishes produce the brightest colors, whereas satin finishes can produce the most visually contrasting appearance. 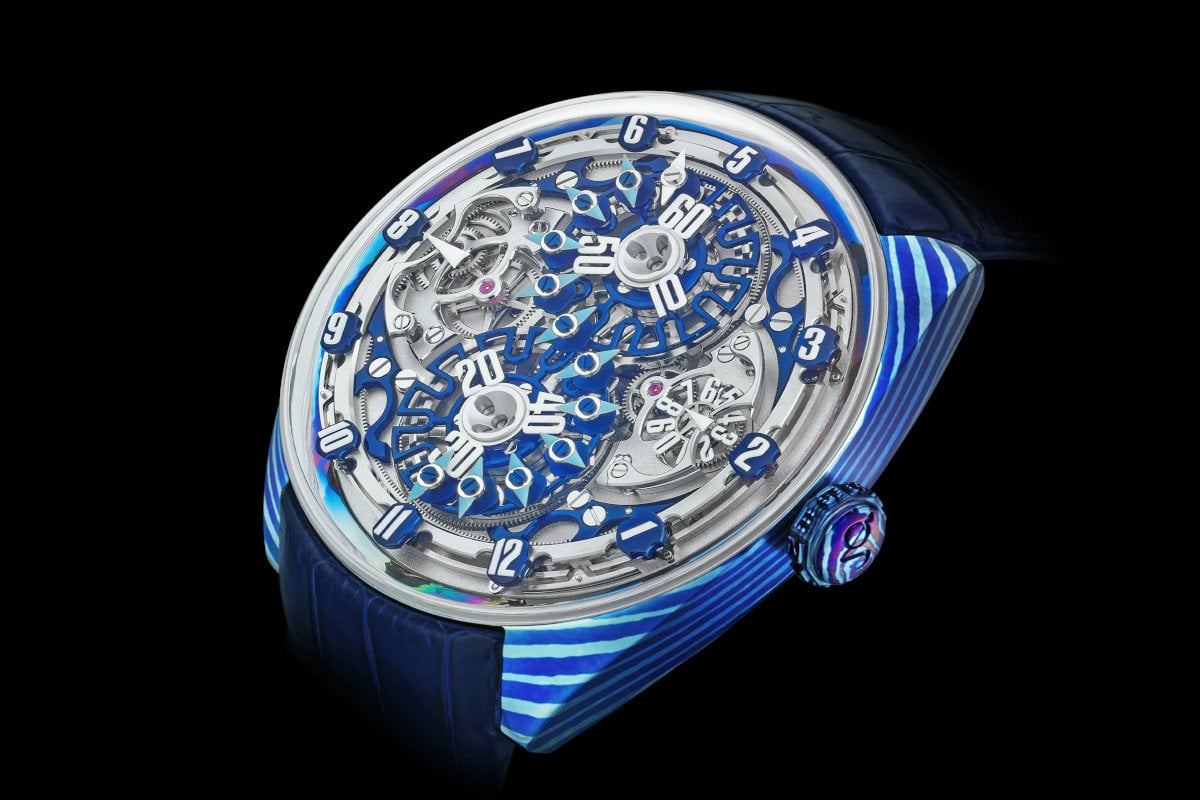 Which watch brands actually use Timascus?

In terms of watchmaking, the titanium Damascus is relatively uncommon. As far as watch cases go, I am only aware of three brands that use it. Zelos has offered Timascus versions of many of its models, and Swiss brand Genus made a Timascus-cased version of its highly-innovative GNS1.2. Additionally, Australian watchmaker Nicholas Hacko used Timascus for manufacturing the main plate, three-quarter bridge, and balance cock of his NH2 watch.

With their bright and bold colors, Timascus and other titanium Damascus patterns are not for everyone, but they’re finding an ever-growing legion of fans. But I’m keen to hear what you think. Is it funky and fun or a short-lived gimmick? Cast your vote below and let me know in the comments!

Hot Topics
Introducing: The Omega Speedmaster Super Racing With Spirate System
163 comments
Design Vs. Specs — Which Is More Important To You When Buying A Watch?
86 comments
The Time To Buy Is Now: How The Current Economic Climate Influences Watch Buying And How You Should React
51 comments
My Predictions For New Omega Speedmasters In 2023
49 comments
A Regret-Free Guide To Buying Your First Luxury Watch — Part Three: Higher-End Options From Omega, Rolex, Grand Seiko, And More
48 comments
Popular
(From The Archives) Shut Up & Read The Truth About Cartier Watches
George Cramer
21
Rolex Submariner Hulk versus Seiko SLA019 : Shades of Green
Michael Stockton
29
Speedy Tuesday – The Original Omega Speedmaster Ultraman
Robert-Jan Broer
7