My First Luxury Watch: Why I Bought My Omega Speedmaster Professional Moonwatch 3570.50.00

Buying your grail watch. Something that some would say can only happen once. But others, myself included, would say can happen as many times as you want it to. As we progress into the world of watch ownership we are constantly redefining terms. Most of us will be able to look back to a fairly humble first “most expensive” watch we ever bought. A term that is typically redefined by your latest purchase. At some point, those lucky enough to take the leap will find themselves owning a true luxury watch. Would I have ever thought, way back when I bought my first mechanical watch, that just three years down the line I’d have a Speedmaster to call my own? Probably not. I didn’t even think it three days before pulling the trigger. But why the Speedy above all else?

Well, it’s simple. After months of deliberation, weighing up all the options out there that would suit my budget, I finally came to a conclusion. I wanted an Omega Seamaster Professional 300 (210.30.42.20.03.001). Now, you might be wondering. If that’s the watch you wanted, how and why did you end up with a Speedmaster? Well, so far we’ve been asking pretty valid questions that I look forward to answering with equally valid answers ( I hope). But for now, allow me to rewind back to January of this year. It’s only ten months back, but it feels like a lifetime ago. 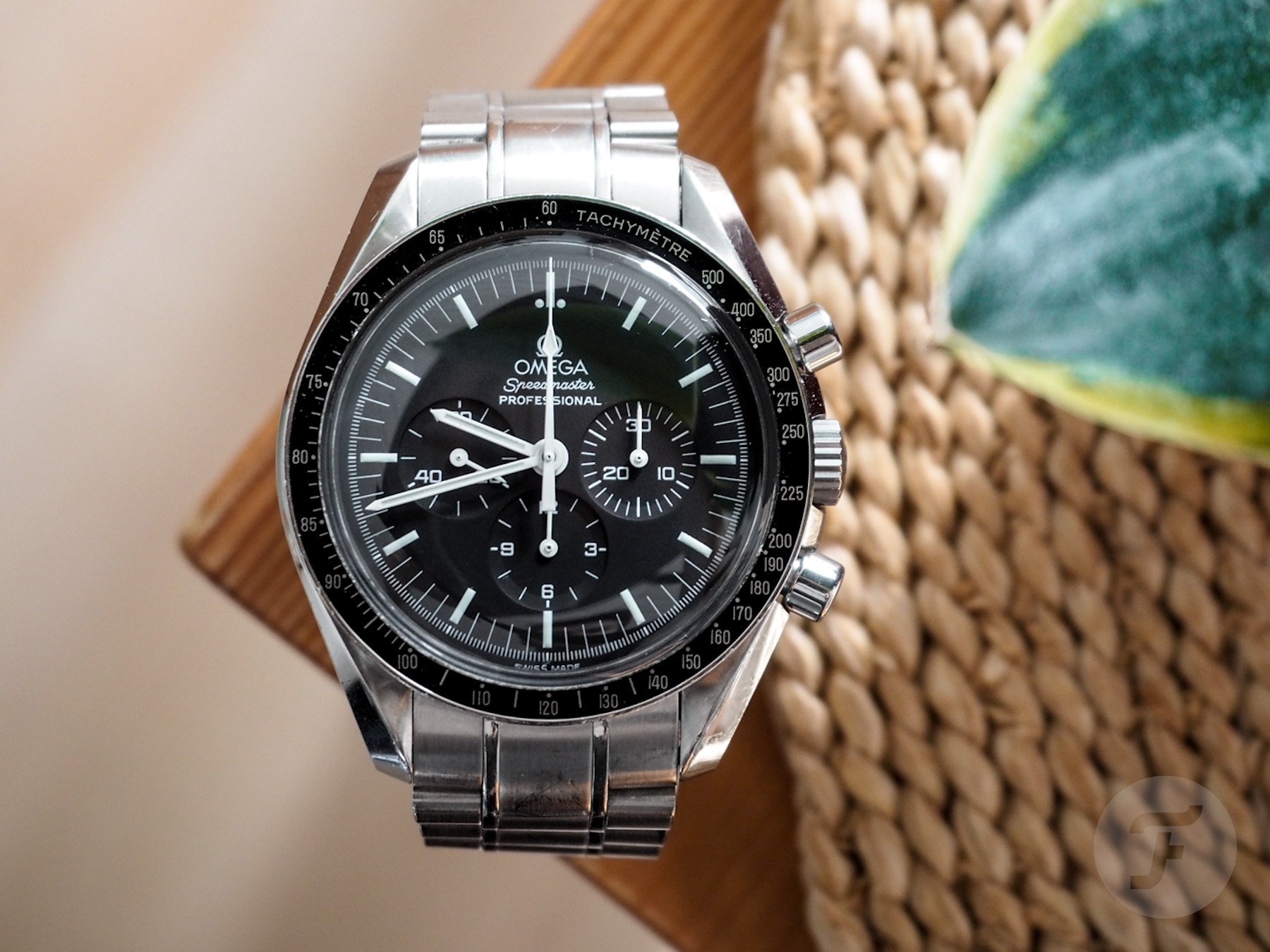 The story starts in Bamberg, Germany, on the first of January 2021. I was sitting on the sofa, surprisingly not hungover after a rather quiet and peaceful New Year’s celebration, watching Das Boot on Netflix with my Seiko Mini Turtle SRPC35K1 on my wrist. Looking through some of my watch pictures, I started to realize that there were hundreds of shots I had taken over the past 2–3 years. It seemed like such a shame, to have all these watch pictures and do nothing with them. Sharing them on my private Instagram wasn’t really an option, as I didn’t want to disturb my friends and family by spamming them with an endless stream of watch pictures. 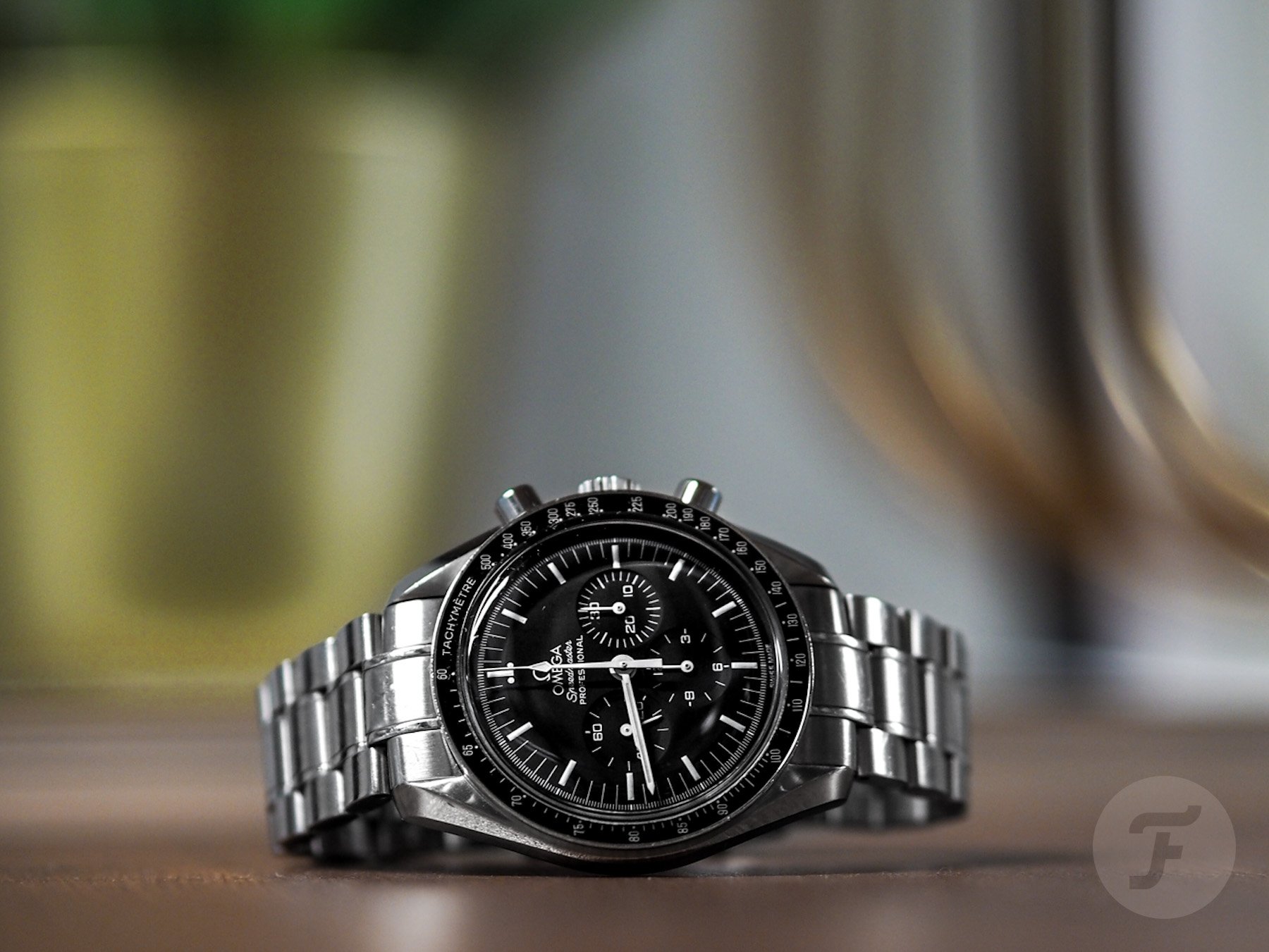 The thought of hundreds of pictures going to waste outweighed my hesitation to create an extra account. If I was gonna do it, I was gonna do it right. The first step was to gather content. I opened up Google Photos and filtered for watch pictures. This turned up about 450 pictures, through which I scanned for those which might be worth posting. Narrowing it down to about 250 different shots. That very afternoon I created my Instagram page (@ncgwatches) and so it began. Before I knew it, I had 100 followers, then 200, then 300. I continued to upload pictures and interact with some of the amazing people that make up the watchfam. Little did I know that a few months down the line I’d be changing my career, moving to Holland, and joining the team here at Fratello. 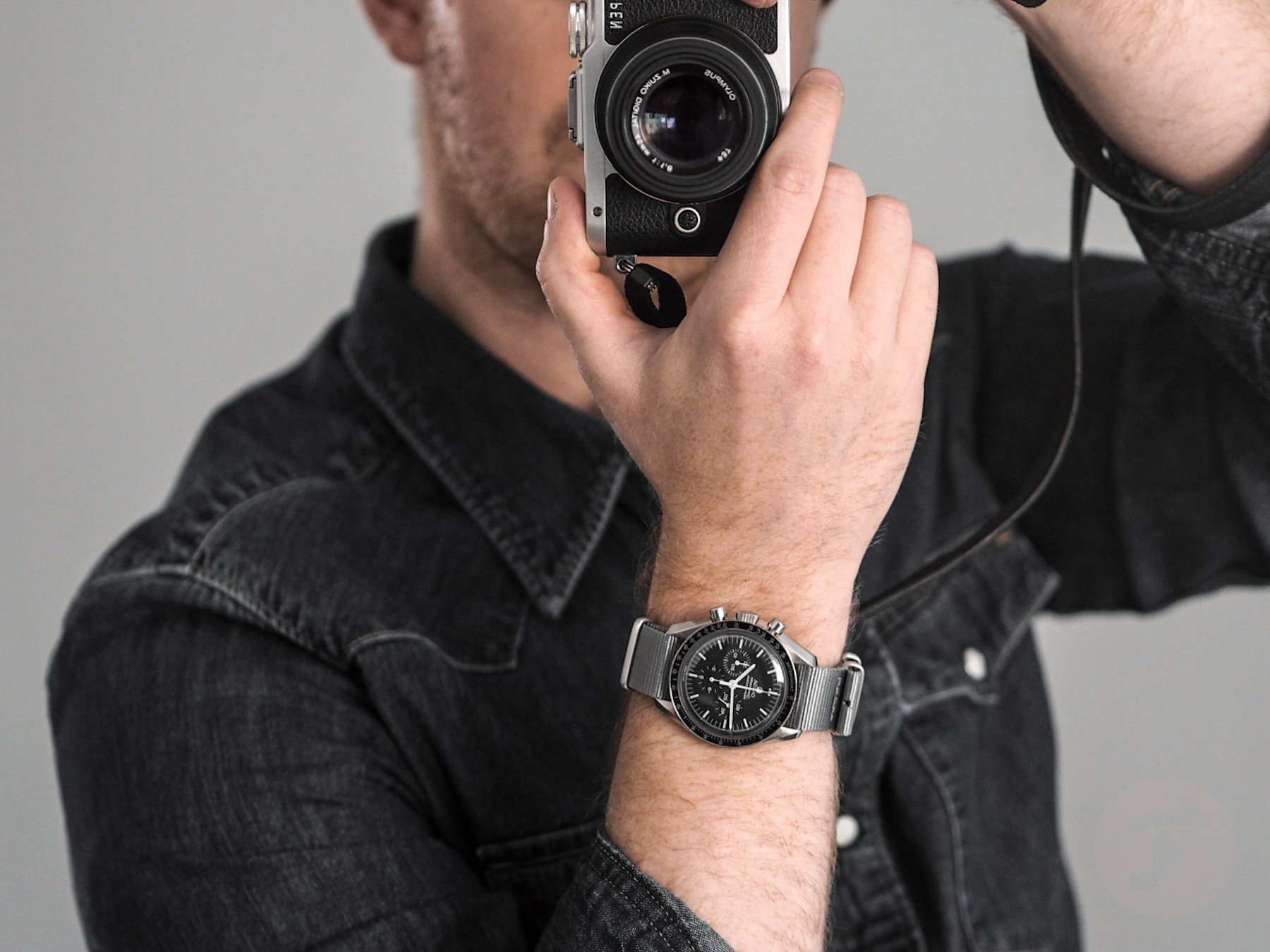 Things were going well with this pet project. Not only was it a ton of fun to post new pictures every day (in the early days this ranged from two to four pictures each day), but it turned out to be a great way to chat with other like-minded watch nerds. It was also a great way to find some incredibly talented photographers out there, who were creating brilliant content. As my supply of watch shots started to run dry, I began taking new pictures every now and then. But as I posted more and more, I quickly realized that what I was able to create with my phone would not suffice. After some research, I decided to go for an Olympus Pen E-PL8, and managed to pick a used one up for a decent price. 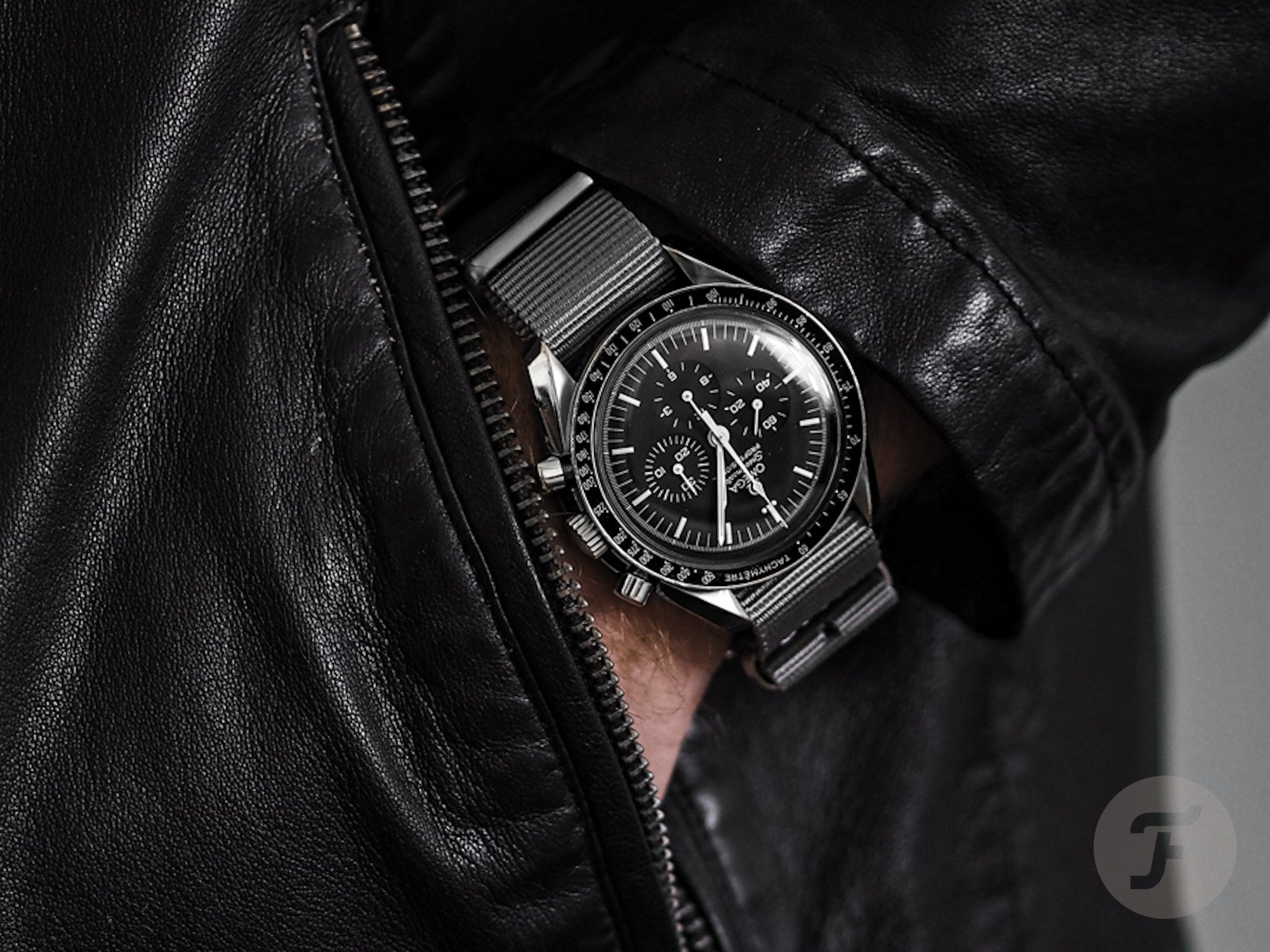 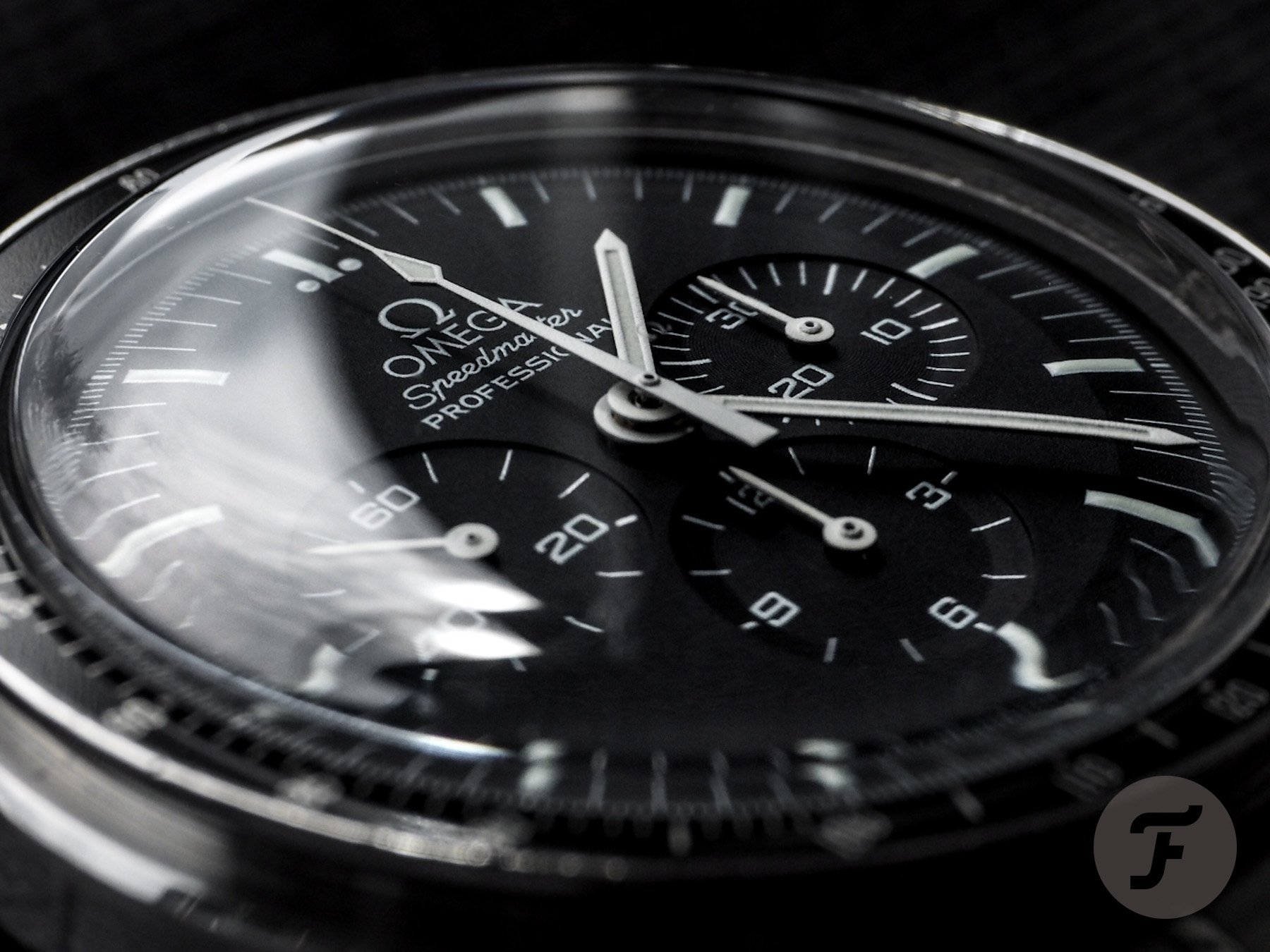 I was always a big fan of photography and had used an old Nikon DSLR for a number of years. However, the Olympus unlocked a quick portable workflow. I was able to shoot pictures, download them directly to my phone, edit them with Lightroom, and upload them to Instagram directly. This was a game-changer and allowed me to learn a lot about watch photography and develop my skills. Another turning point was being invited onto Rico’s Watches Podcast. I couldn’t believe Eric would have such a small creator on his show. Looking back at the star-studded list of guests he has had since, including our very own RJ, I’m even happier to have made the cut not once, but three times now. It was actually Eric who told me, after our second chat, that Fratello was looking to hire… And the rest of that story, well, you can imagine how it went! 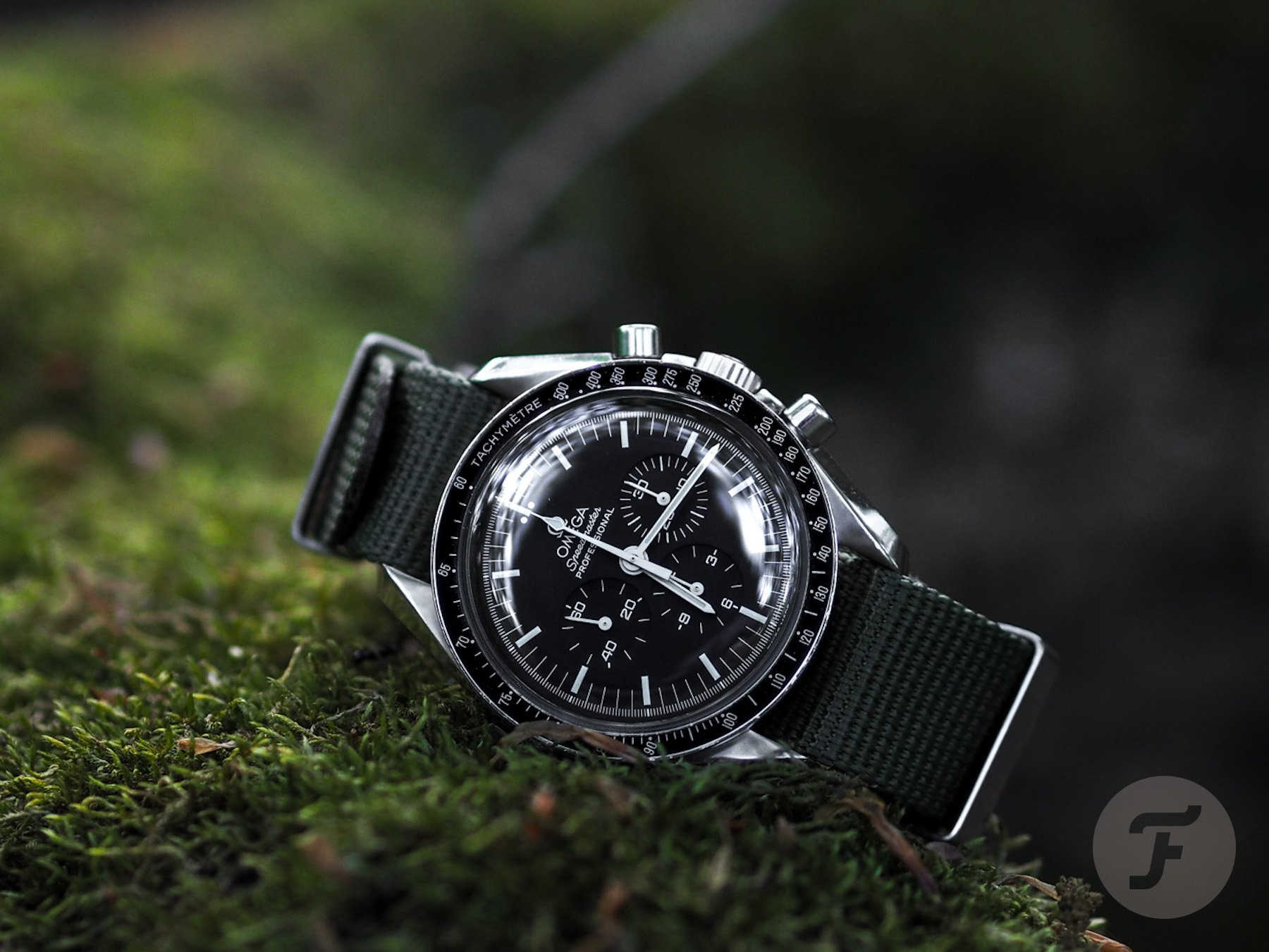 As I mentioned before, I had been thinking about biting the bullet and buying myself an Omega SMP 300. However, after speaking to a number of people who criticized the SMP as being slightly too big and thick (arguments that didn’t hold up when I finally got to see the watch months later) I started to have my doubts. Listening to Episode 136 of The Grey NATO podcast was the final straw. In this episode, Jason Heaton made a point about the Omega Speedmaster being an unmistakable classic. Someone looking at this pre-moon 145.012 from across the aisle on an airplane, wearing the new 3861 Moonwatch would recognize it as a Speedy regardless of the age gap of the two watches. It was this timelessness that appealed to me so strongly that it lead me to change my mind about the SMP. 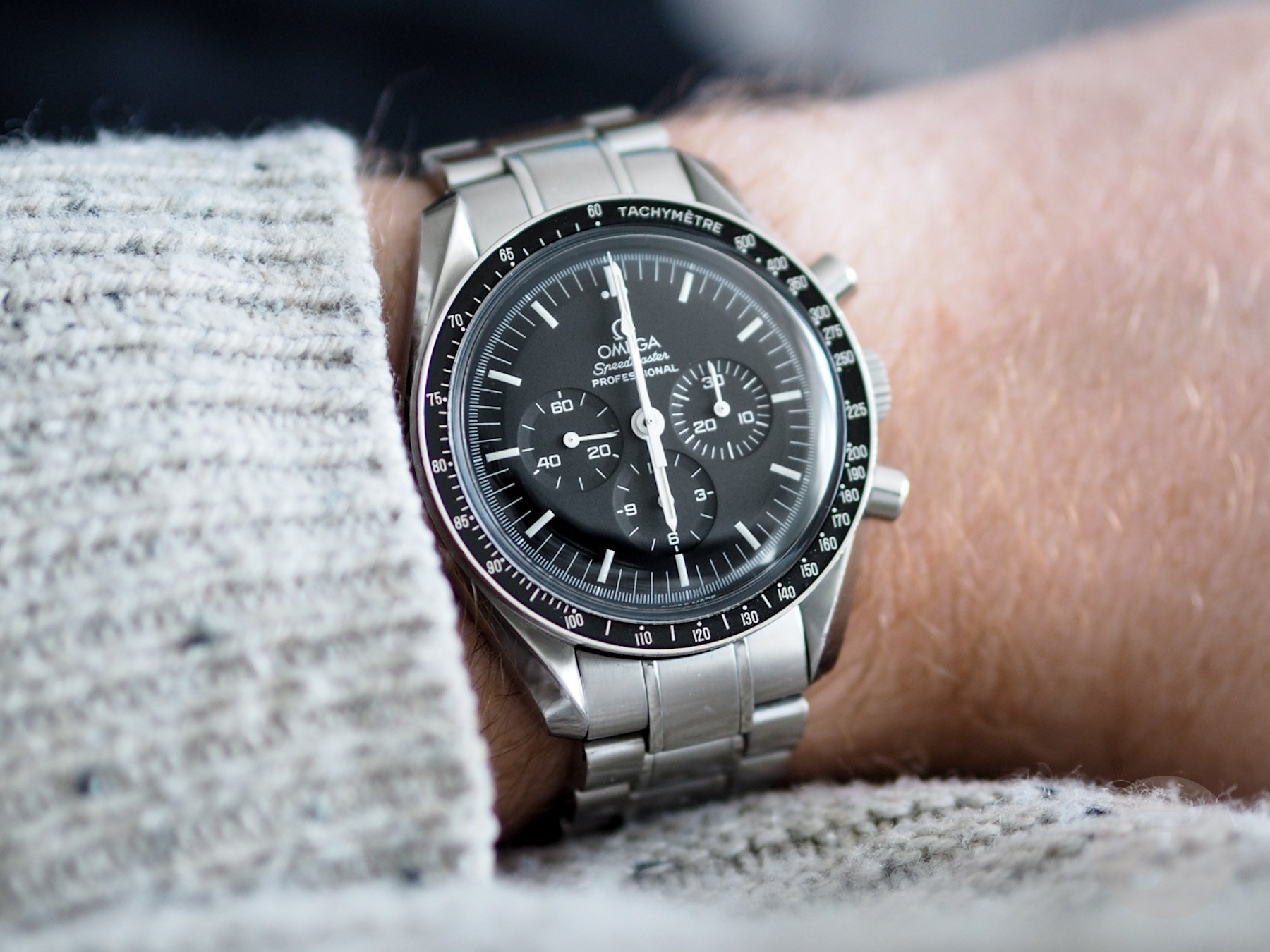 I couldn’t know how that particular watch would age. Looking at the 1990’s Bond Seamaster, I see an old watch from an older generation of the lineup. It still looks great, but it’s clearly of another time. This is not the case with Speedmasters. Sure, there are subtle differences that matter, but the overall look has remained true to its roots. For a first luxury watch, this was clearly the way to go. It had to be something that I could look at on my wrist ten, twenty, thirty years from now, and still absolutely love. This is how it began. I caught the Speedmaster bug. 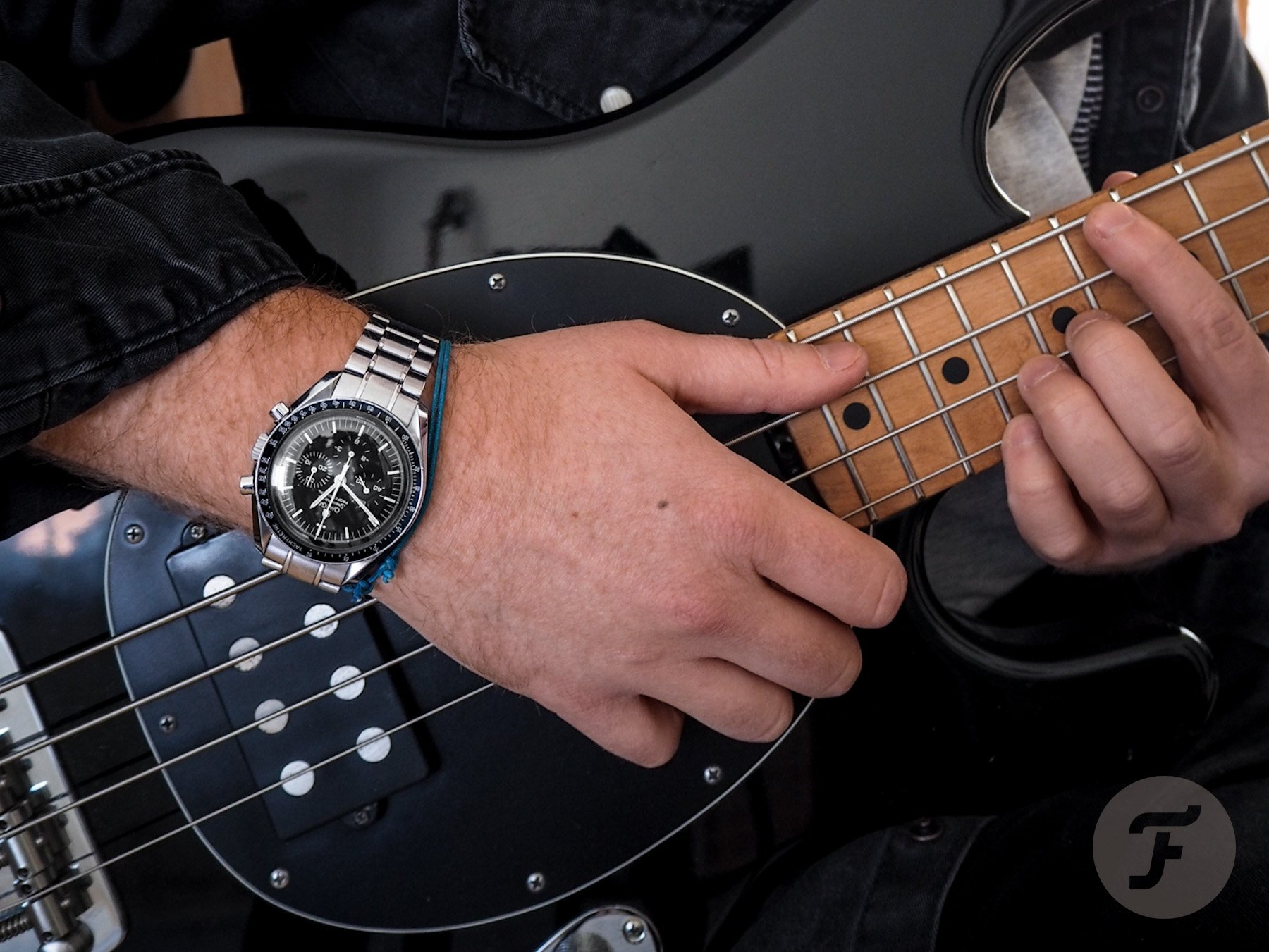 Early 2021 was an interesting time to be looking at Speedmasters for sale. Obviously, the latest model had been released in January, but my humble budget did not allow for a new watch. Seeing some forum posts of Speedmasters sold only a few months before was quite disheartening, as prices had seemed to jump by almost €1K. After looking on the well-known grey-market sites I eventually found the watch I would call my own. Two serious considerations when making the purchase were the price, as well as being able to trust the seller. I steered clear of forums and private sellers, with such a significant purchase (the most expensive purchase I have made to date other than my car) the peace of mind that a 14-day money-back guarantee and a 2-year warranty gave me was a must. Before I knew it, I found the one. 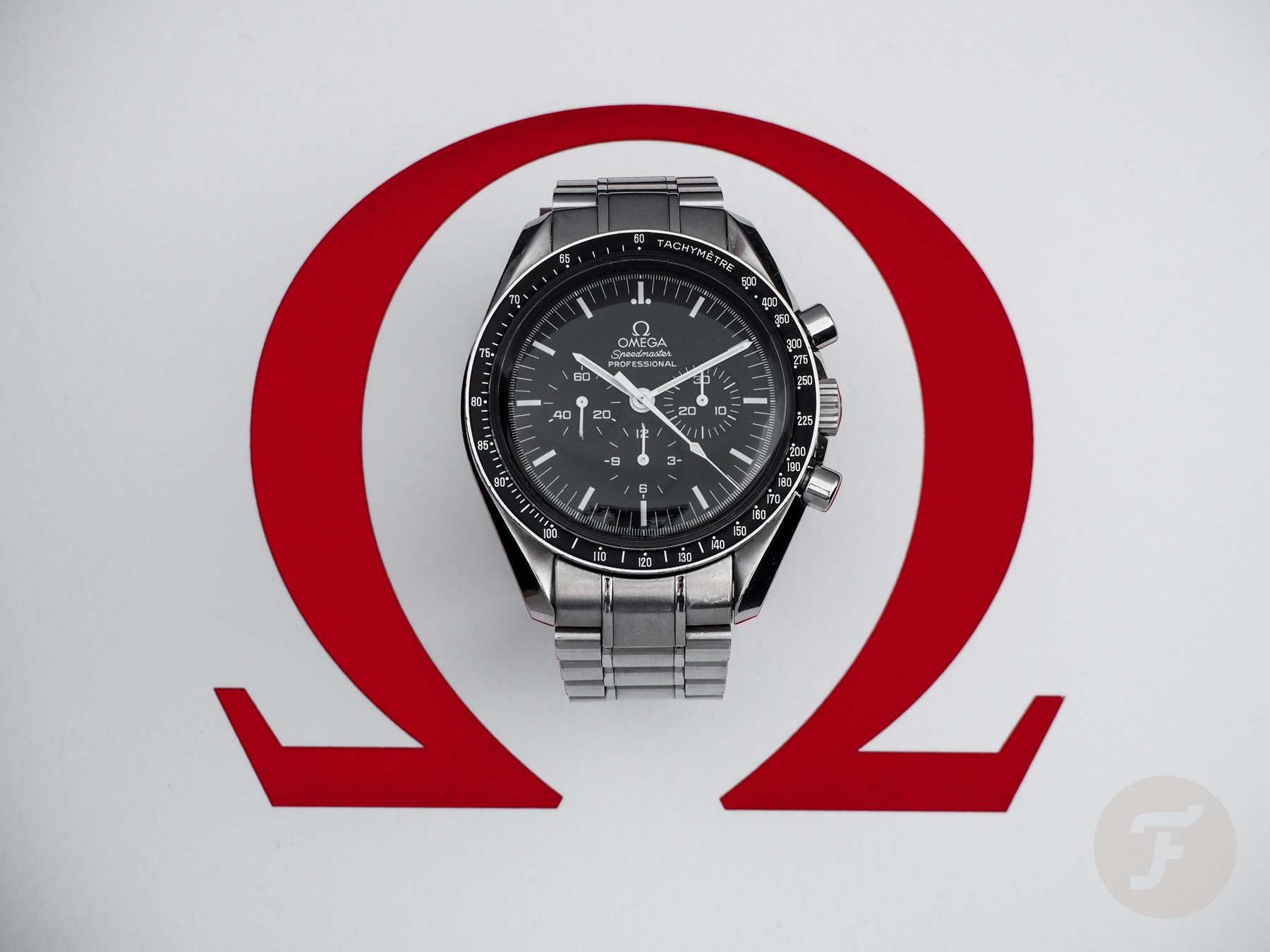 Dating back to 2000/2001 it was a Speedmaster Professional Moonwatch 3570.50.00. Its condition was reasonable, the price was right, and it didn’t matter that it didn’t have the box or papers. I wanted to wear the thing, and whether or not those items were in the back of my closet didn’t matter at all. Still slightly hesitant, I ran the thought by my girlfriend, who to my surprise was very encouraging, I decided to take the plunge and go for it. I suppose it was seeing the growth of my Instagram page and my dedication to continuing to create content for it that made her see how much this meant to me. With her approval, I went for it. The watch was shipped from Germany, so it was with me the day. Opening the box was a magical thing. I quickly re-sized it and put it on my wrist. It was perfect! 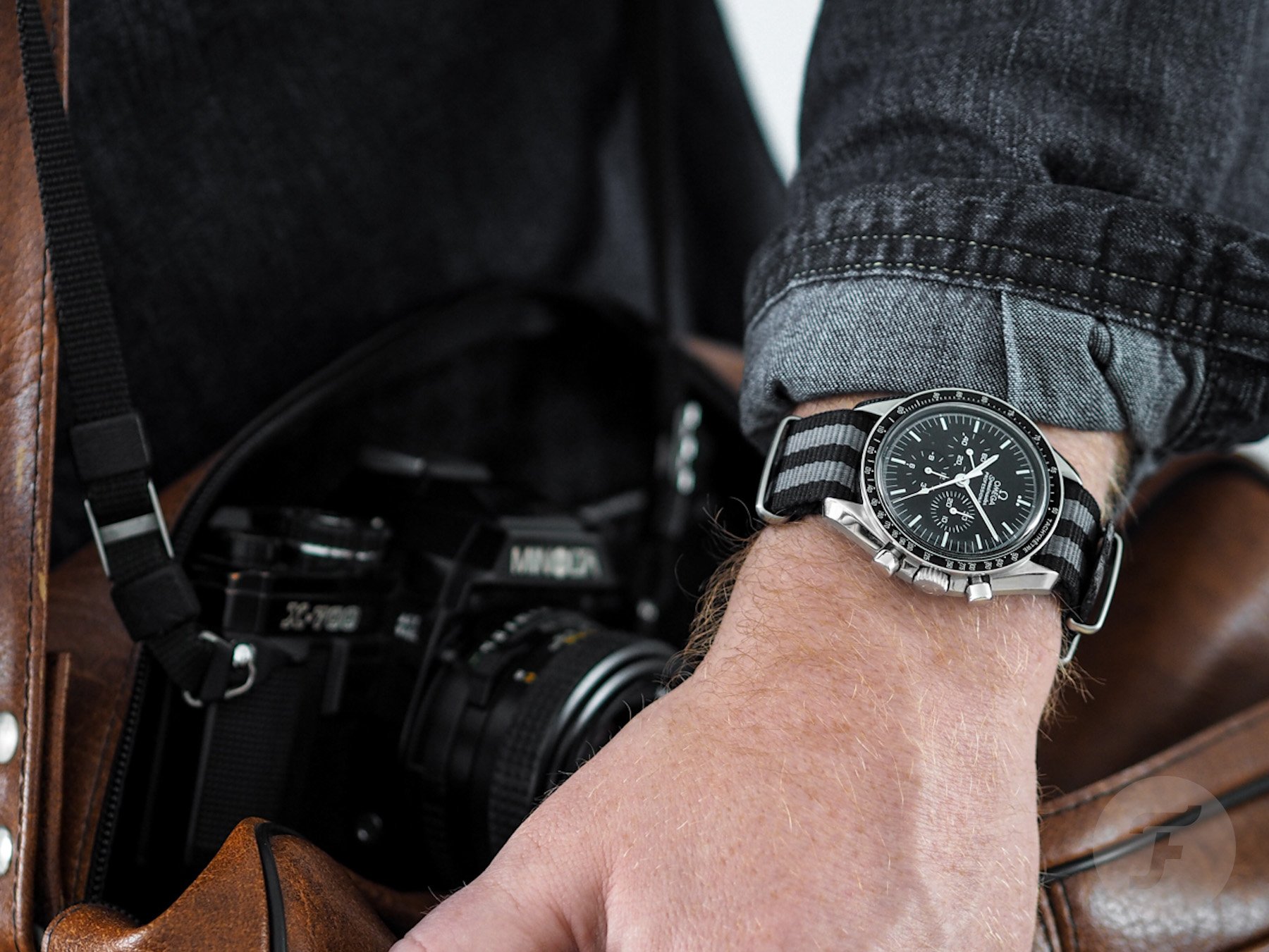 Now, I realize that I’m preaching to the choir here, but I’m also sure that most of you will be able to think back to the first time you put on your first Omega Speedmaster. And those of you that haven’t owned one yet can look forward to it. It’s pretty damn special. The watch is so slim and just hugs the wrist unlike anything else. And flipping it over to see the Moonwatch engraving is a very special thing. It’s a watch that oozes heritage, and its timeless looks are unmistakable. All of this luggage adds a certain weight of importance to the watch and makes owning one all the more special. It’s a watch that works on any strap you put it on. From the OEM bracelet or alligator leather strap to aftermarket bracelets from Forstner or any number of leather or sailcloth straps. 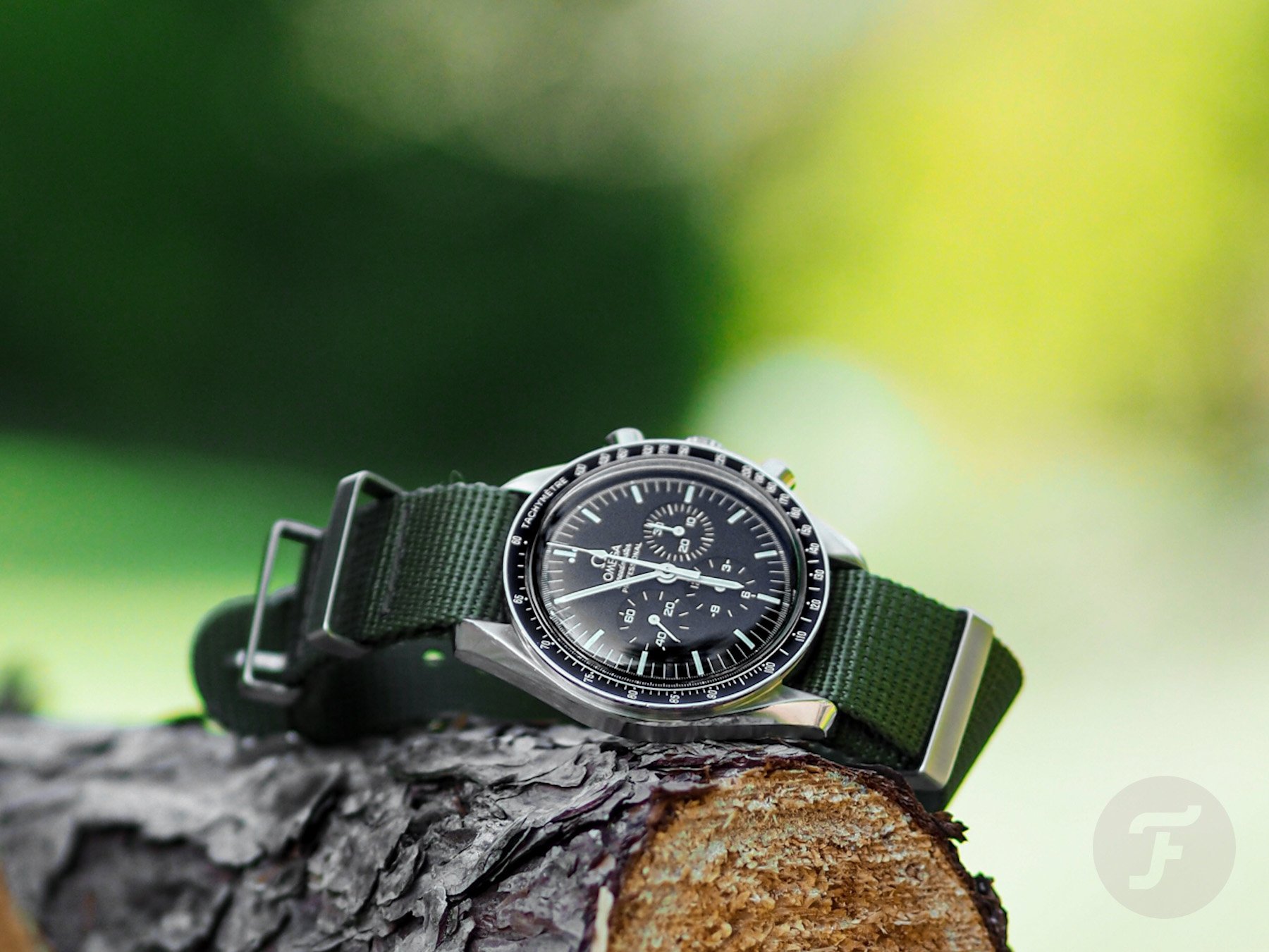 Overall the feeling of the watch was unlike anything else I had experienced. Keep in mind that the most luxurious watches I had owned up until that point was my Tissot LeLocle (which I’ll be writing about soon here). Obviously going from a €500 watch to a €4K watch was quite a jump, but in a way, it felt like skipping straight to the hook of your favorite song. It was not something new and exciting, but it was very special to me, and will always be. 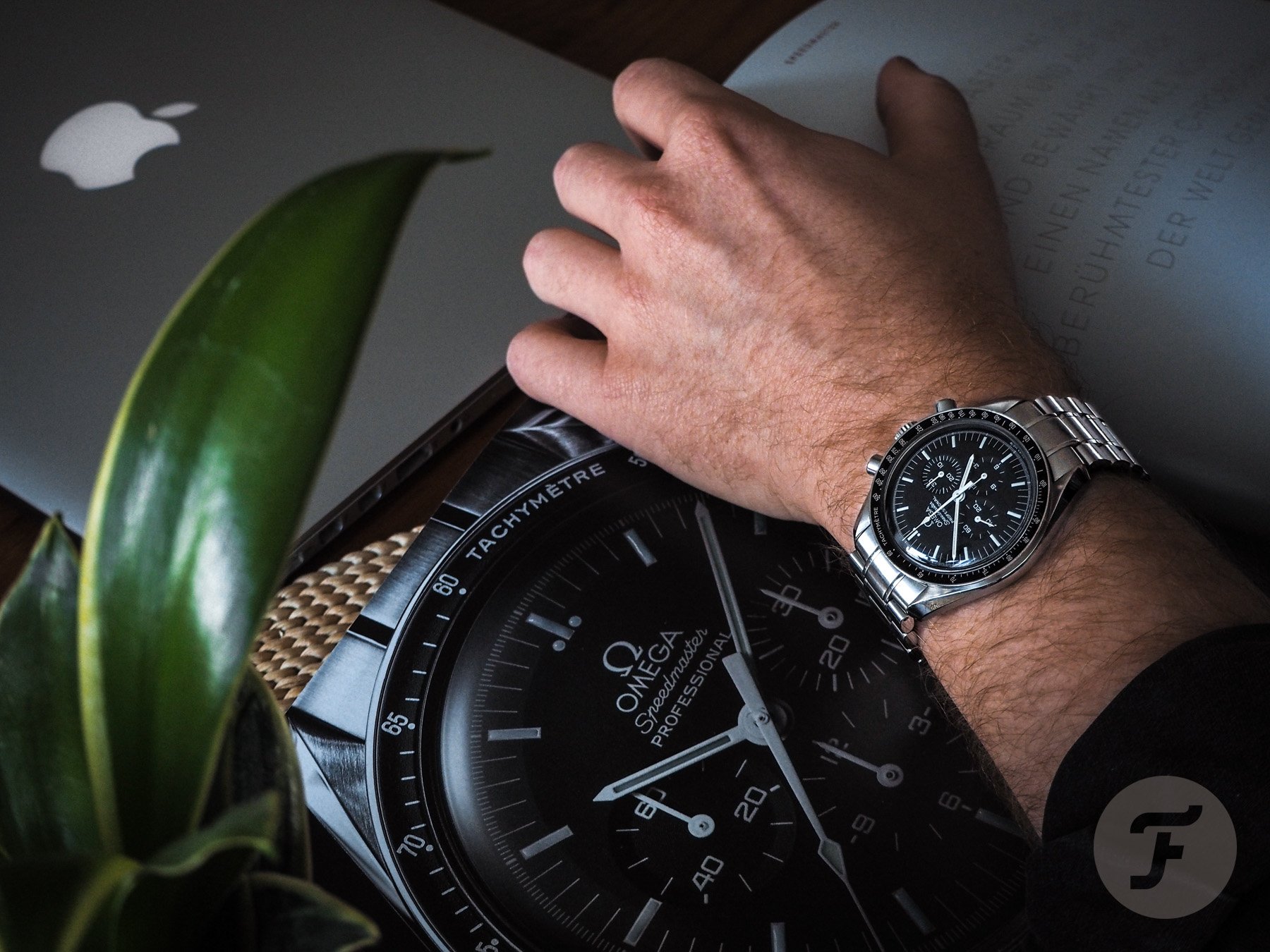 What’s special about it? Well, not much…

It feels like somewhat of a cliche — there are many like it, but this one is mine — but I guess the most special thing about this particular watch, is that it’s mine. Unfortunately, there isn’t a remarkable or meaningful story tied to this watch. It was a case of knowing what I wanted and buying it. However, that doesn’t mean that someday, years down the line, it won’t have a few more dings, dents, and scratches, with all the stories that come along with them. Instead of thinking that this is a watch without a special story, I like to think that it’s just waiting to be written. 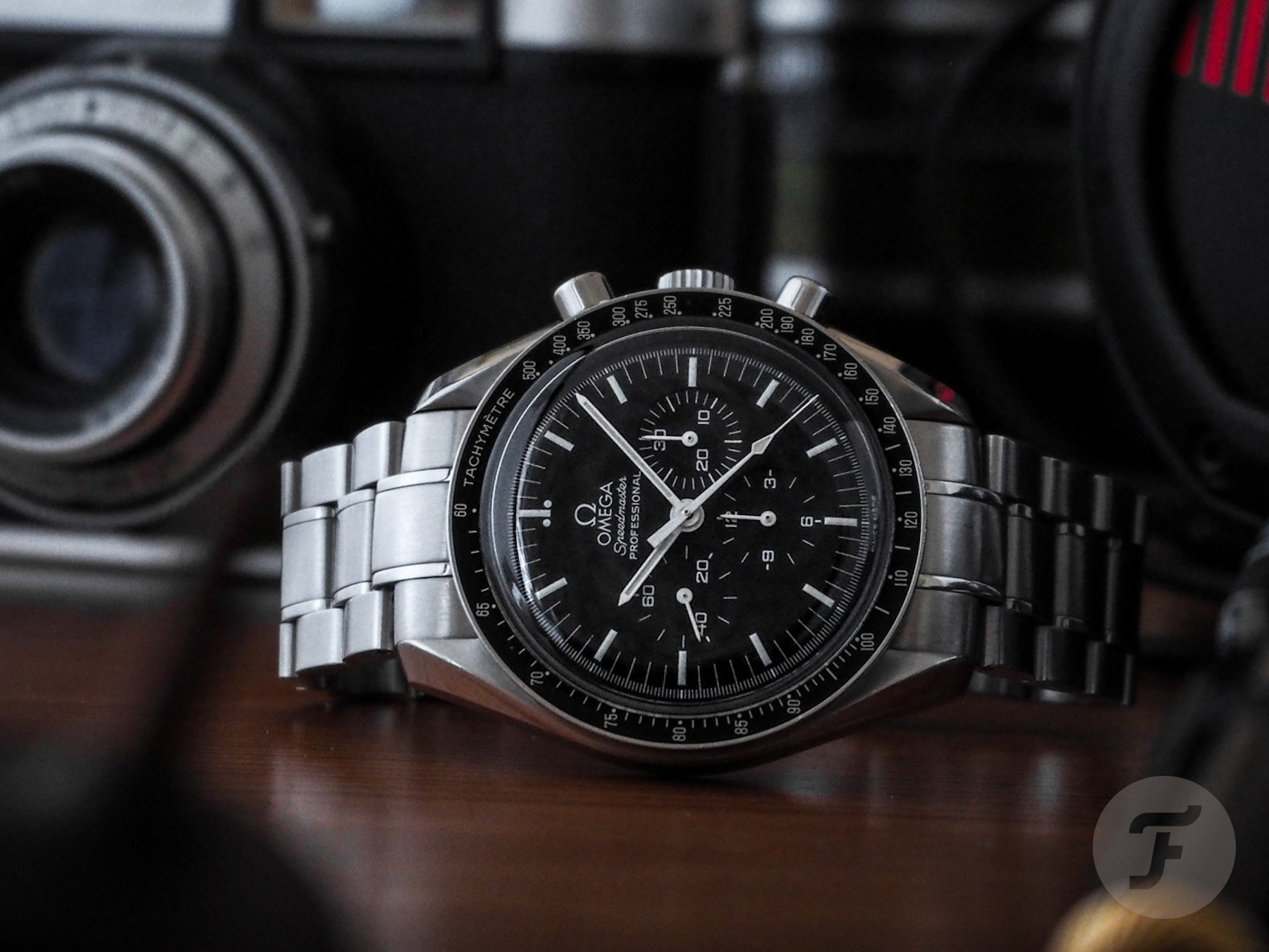 My Speedmaster has been with me for just under ten months, and already it has accompanied me through some pretty major events. Little did I know that three months into ownership I’d be applying to the de-facto authority on Speedmasters. And when I first put that watch on I had no idea I’d end up moving to Holland to join the team after getting the job! Not even a year in and the Speedy already has a story or two under its belt, and I can’t wait to look back five, ten, twenty years from now and see how many important milestones this watch has been with me for. There’s one thing I know for sure: the Speedmaster never gets old! 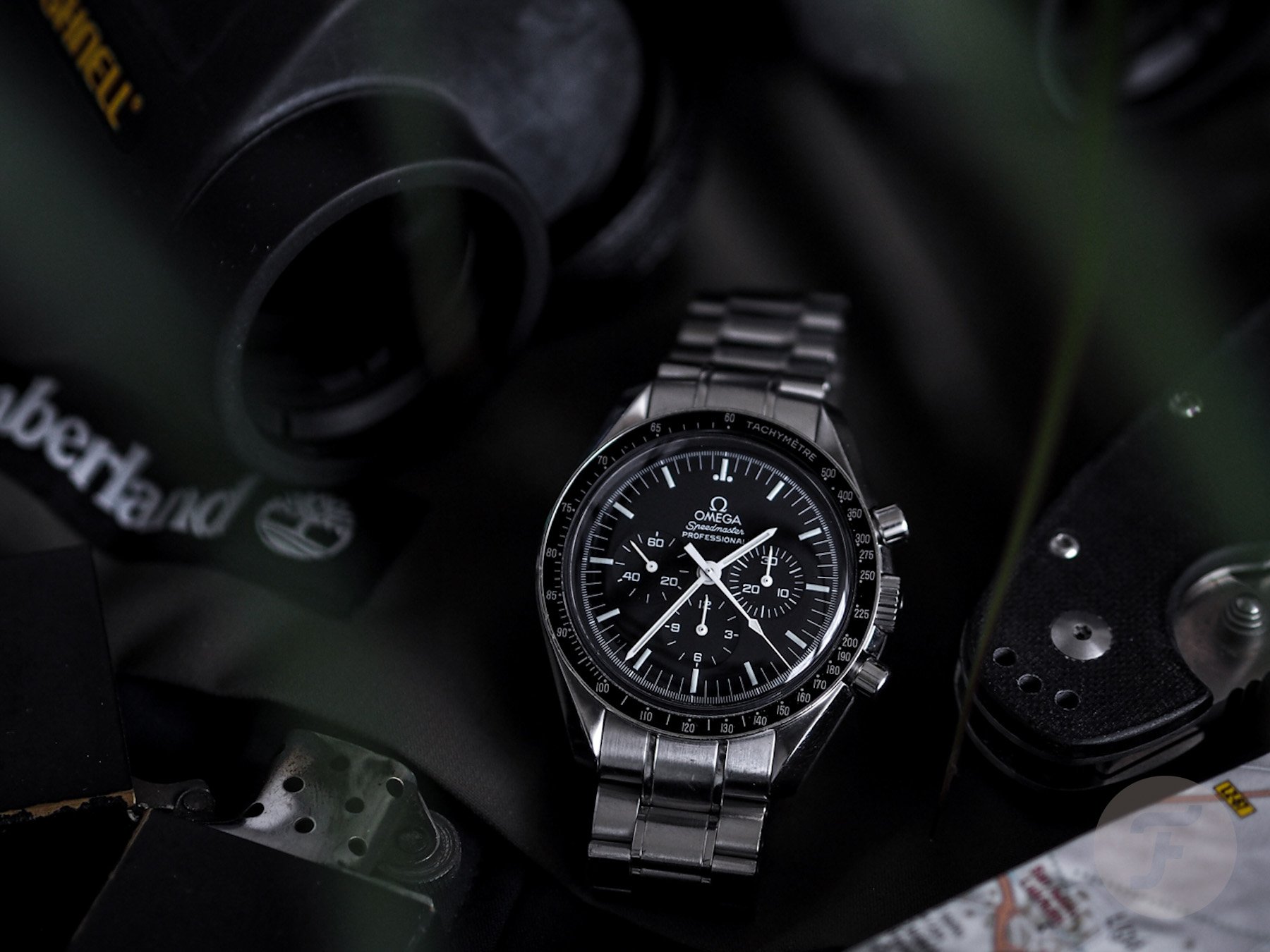 What? Did you expect me to tell you more about the watch itself? Well, I decided not to bore you with the technicalities, as anything I could write about the ubiquitous Speedmaster itself that’s actually interesting will only ever be tied to my own experience with it. If you want to know more about the technical details of this, or any other Speedy, check out the ultimate Fratello Speedmaster resource here. If you want to stay up to date with me, my Speedmaster, and our adventures, check out my Instagram page: @ncgwatches.

What was your first luxury watch? Do you own a Speedy? How did you come to own yours? I’d love to hear from all of you Fratelli in the comments below!