Why The Oris Aquis Date Calibre 400 Is My Grail Watch

Grail watches are supposed to embody the best. “Best”, however, is a subjective term. That’s why everyone’s grail is different. What I consider best for me is a watch that doesn’t require careful handling. My best is a watch that can keep up with me in all that I do. Beyond that, I want the ultimate expression of capability in specs and design, as well as efficiency of material and cost. Thus, as far as my judgment is concerned, I want an Oris. And if I’m buying tomorrow, I want an Oris Aquis Date Calibre 400.

If my grail is a watch, the tower that keeps it is Oris, and I admit I’m more enamored with the tower than the various potential grails within. Oris has spoiled me these past couple of years, and I’m almost content with holding off to see what else the brand has up its sleeve (Caliber 402, anyone?). But if we’re all naming our grails (and we are), it’s easy enough for me to point to mine — the 41.5mm Oris Aquis Date Calibre 400 in blue. 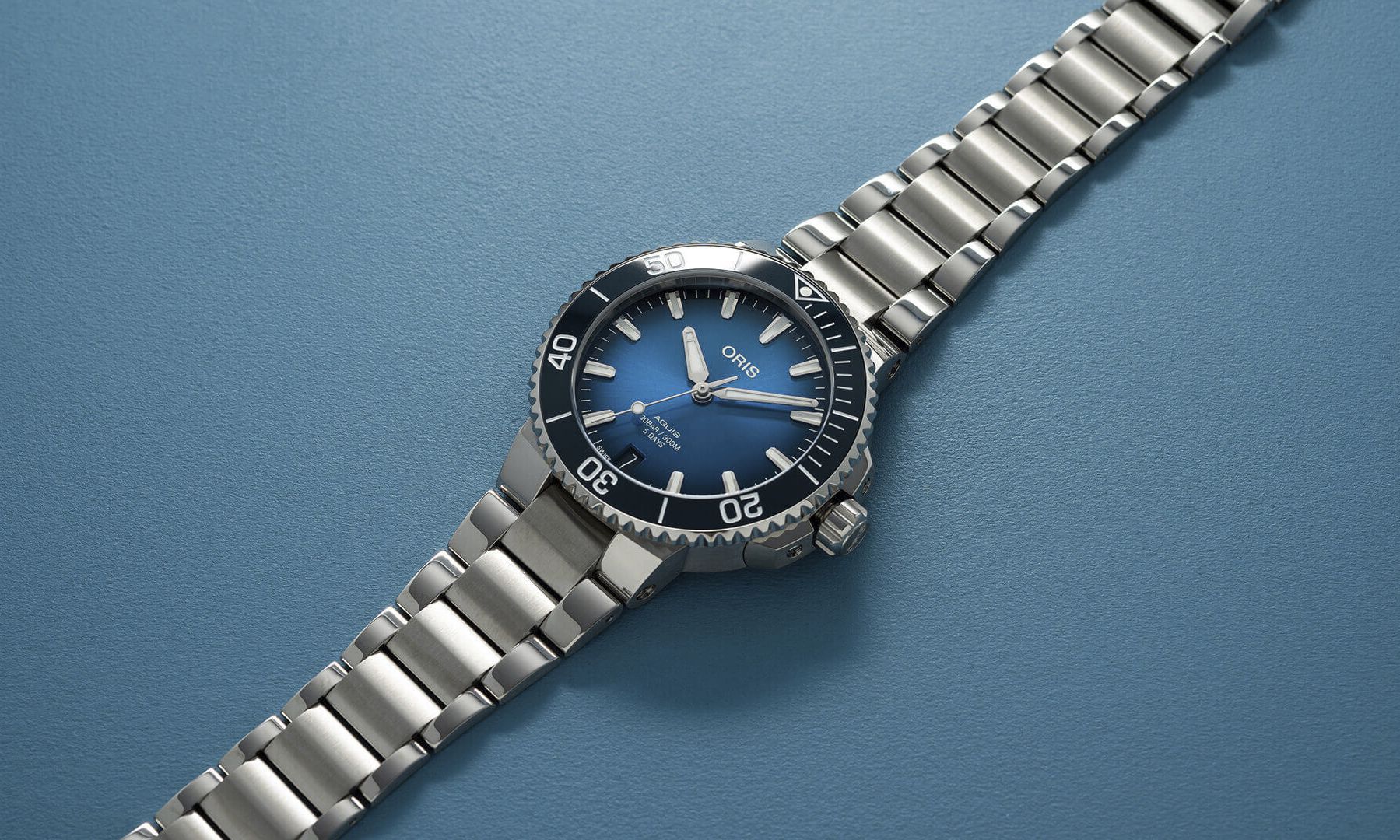 Not much of a grail, is it?

For any of you keeping up with my most recent articles, there may be an exasperated “of course” and a throwing up of hands. Seriously, how many consecutive articles on Oris can I write? But this is a pre-meditated ending to a trilogy of sorts exhibiting Oris as I’ve come to know it. All these articles played a part in building my case. Everyone else took one article to announce their grail. Me? I took three. I’ll argue that it’s compensation (or an extended pitch) for such a humble grail.

Regardless of whether you read the article on Oris’s sustainability or the argument I made for the watch Oris is missing to make it the best, I expect most everyone can agree that sub-$10K is hardly grail territory. Grails are supposed to be an almost unattainable pinnacle of all that is sacred (in horology). They are what inspire knights (or us watch nerds) to embark on quests to attain them. But, as in Indiana Jones and the Last Crusade, the holy grail need not be ornate. In my case (as for Dr. Jones — spoiler alert), the grail is humble, plain, and full of piety. But it didn’t use to be that way. 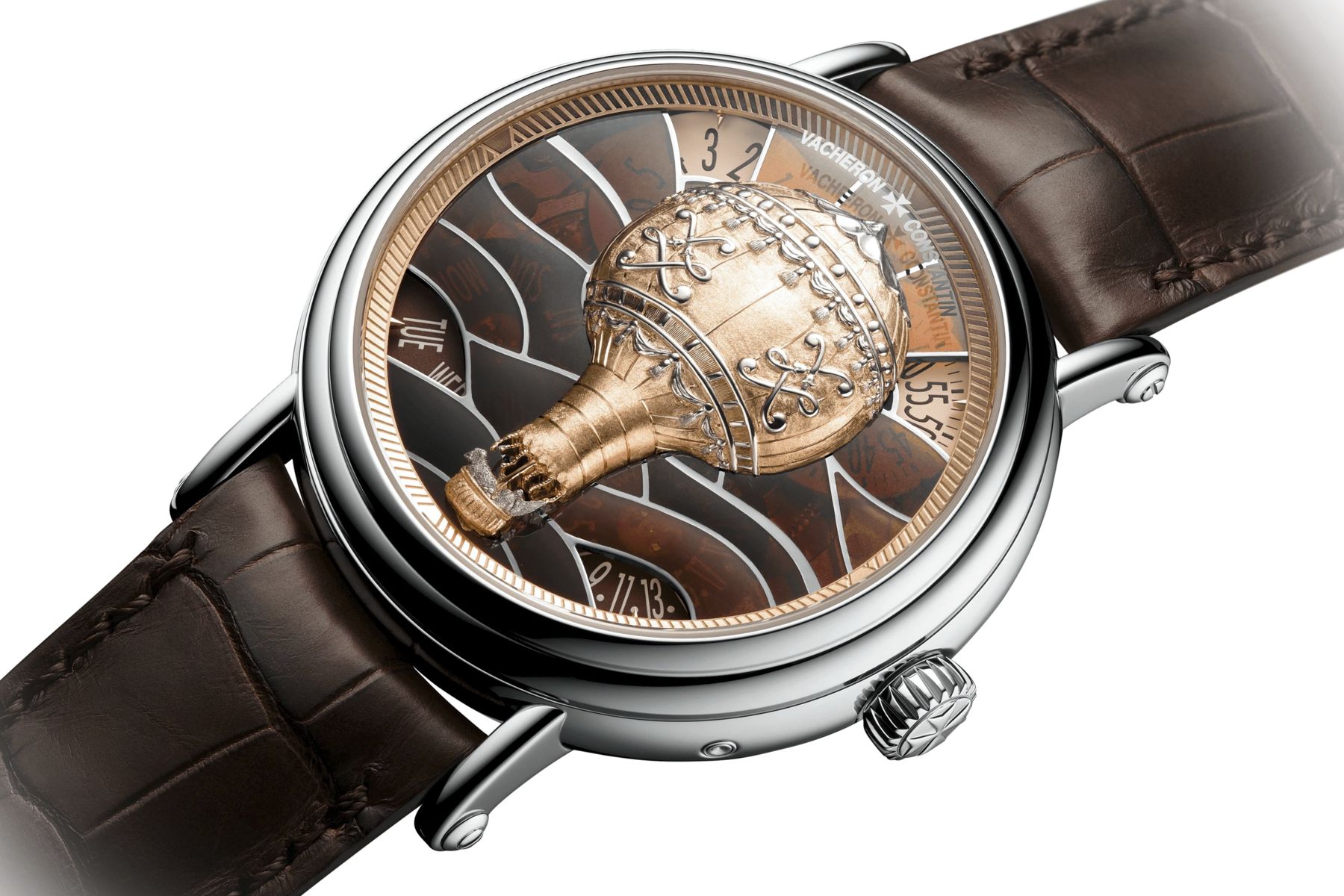 My quest for the grail watch

I started my watch journey drooling over the Omega Speedmaster — no wonder I ended up at Fratello. Then I branched out to Rolex, Patek, and Vacheron Constantin. My head was on a swivel, daydreaming about one watch or the next. For a minute, I thought I wanted one of VC’s Métiers d’Art — the Les Aérostiers, the hot air balloon watch. A worthy choice, seeing that it costs over $100K. Choosing a grail at this echelon took on a form of escapism. If I were a person that owned that watch (dealer’s choice), I wouldn’t be in the situation I was — underpaid, overworked, and unfulfilled. Well, spending a luxury car’s amount of money on a watch doesn’t solve problems like that.

Instead, I transitioned out of the situations making me so miserable, and I continued window shopping for watches. But I was looking less at watches that took me out of my reality, and instead began mentally trying on watches that I saw accompanying me from where I actually was. That’s when I really started having fun. And I found that there is “the best” in regards to craftsmanship, materials, and pedigree, and best as far as how good a fit it is for me. Now entered into the game all manner of watches from Seiko, Sinn, and the like. That’s when Oris became a serious contender.

Now there’s a difference between a watch that’ll work for me right now and a watch that’ll work for me from now on. I’ve purchased a couple of in-a-pinch watches that aren’t leaving my collection any time soon. Those aren’t grail watches, at least not to me. It’s hard to game out “until death do us part”, but people get married all the time. If I could prepare for making that decision, buying a watch to wear forever is a piece of cake. And Oris — in its product specs and design and my interpretation of what it stands for as a brand — is a watch I can wear forever. 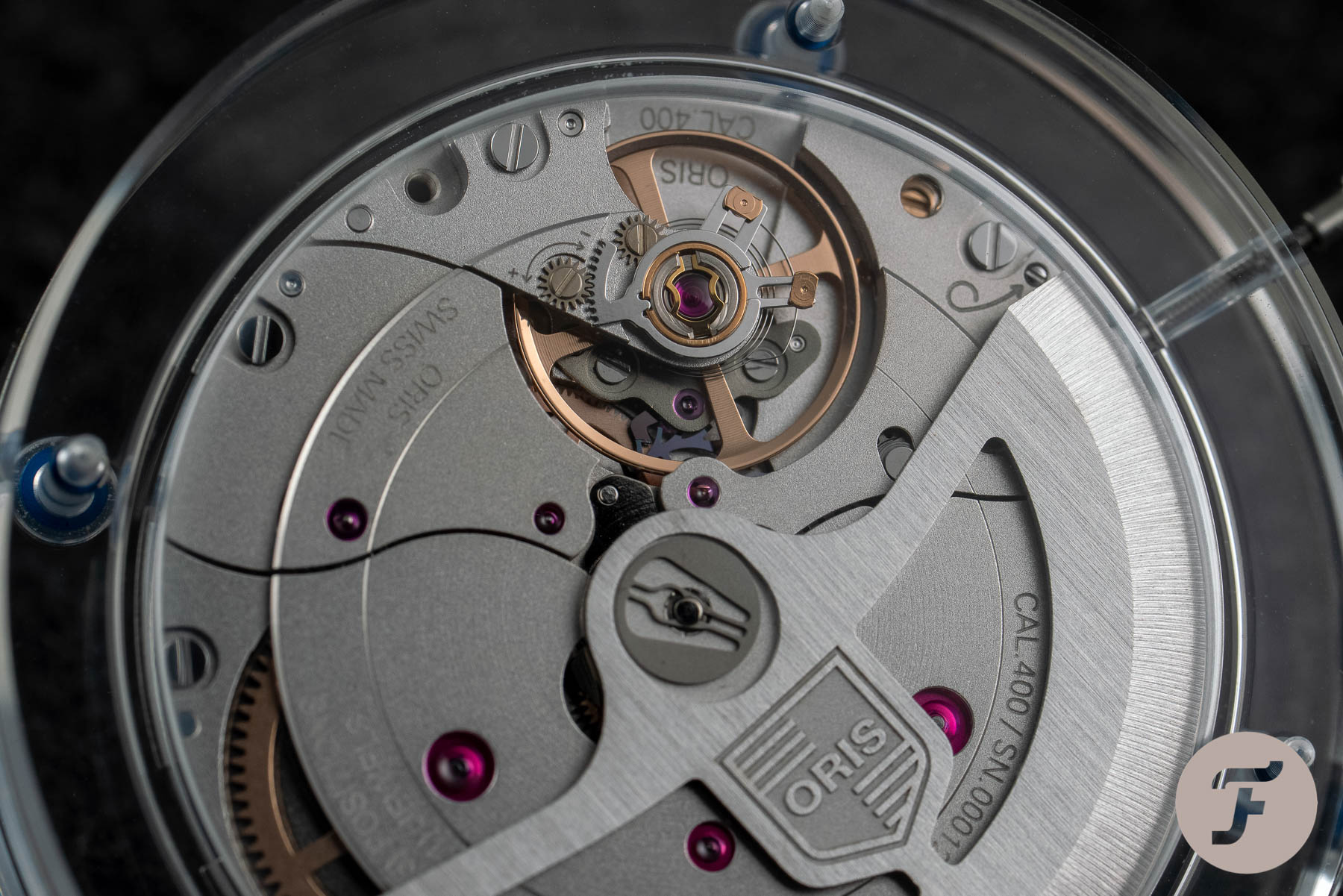 Because when looking for “the one”, it’s almost all a specs game for me. I had Oris on my radar for years, but the release of the Calibre 400 changed everything. With the five-day power reserve, 10-year service interval, and 10-year warranty, Oris stepped to the conceivable end of what’s possible in a workhorse mechanical movement. This snapshot in horological history in and of itself is almost reason enough for me to choose the Oris Aquis Calibre 400, but the reduced frequency of repair added an element of economy that sweetens the deal.

If I’m going to be marrying this watch, I want to have an idea of what to expect. A 10-year warranty is an unprecedented assurance in a watch. I don’t know where I’ll be in 10 years — it seems far away enough to be a dream. But I expect I’ll still be interested in watches and enjoying the outdoors. That’s a win for the Aquis Calibre 400 with the above-mentioned specs and 300 meters of water resistance. 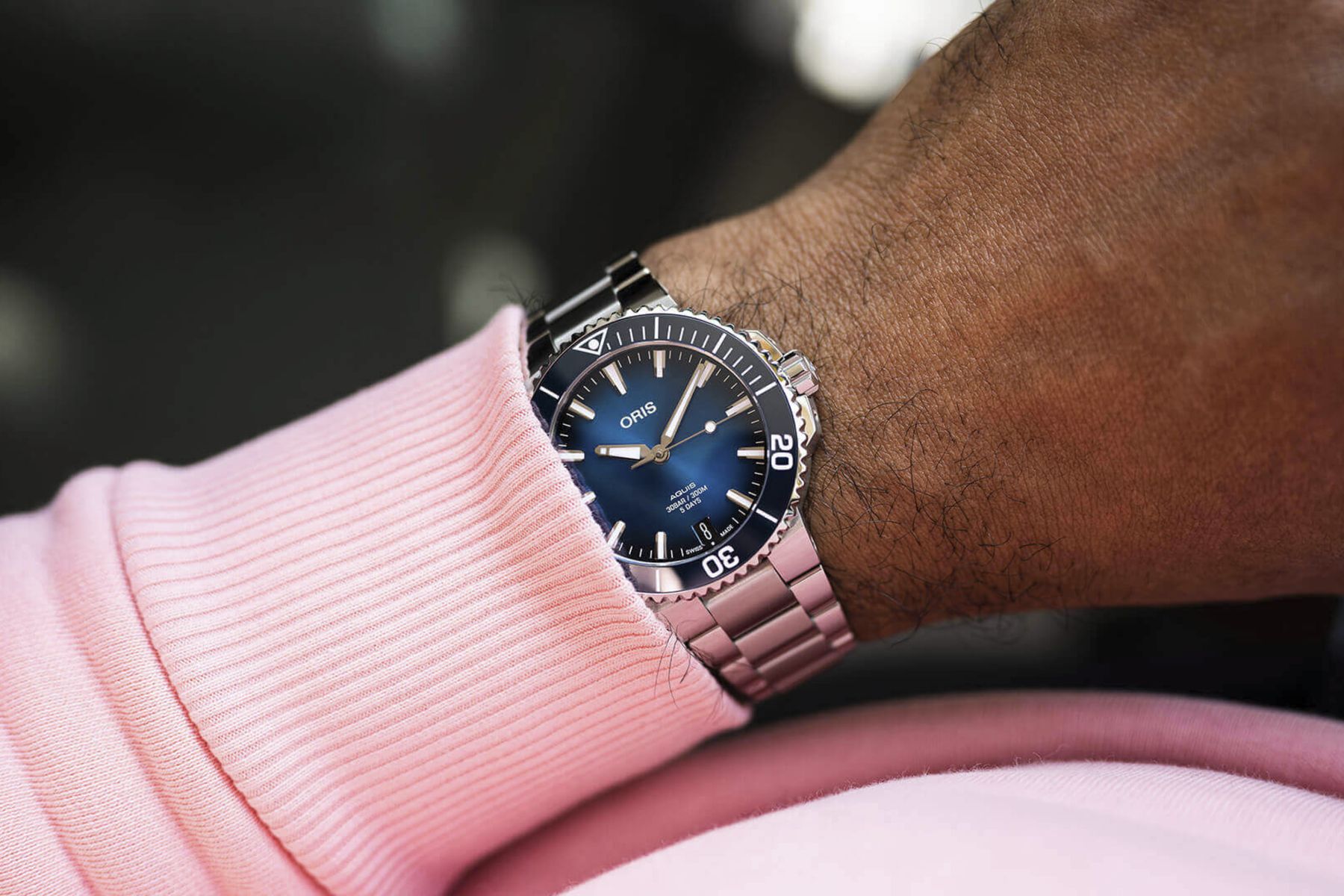 A company I can purchase

My purchase and servicing of an Oris Aquis is an investment in the company as well. Yes, financially, but also as a brand and all the minutiae that comprise it. I’m going to have the watch on my wrist. It will undoubtedly be representing something about myself, whether I like it or not (I do). It’s all that Oris is doing on the whole — environmentally, socially, technically — that sells me on any particular watch. I love what Oris has done, and I’m looking forward to seeing what it will do in the future.

Torn between now and then

Therein lies the predicament. If I’m choosing today, my grail watch is the Aquis Date Calibre 400. Its design appeals to me, of course. More importantly, it is a slice in Oris’s and the greater watch industry’s history marking the 10-year repair standard milestone (I know that the 41.5mm Calibre 400 wasn’t the very first). But Oris is just ramping up, and I think there’s a lot around the corner to look forward to. Honestly, I could buy the Aquis now and not beat myself up if and when Oris releases the next 400 variant. Like marriage, I’ll make my commitment and then not look too closely at anything else. I have experiences to live and stories to make… with the watch. I’m a simple man (obviously), and besides, there isn’t much that Oris could do that would make me want something more than a Calibre 400. There’s simply not anything more that I need. 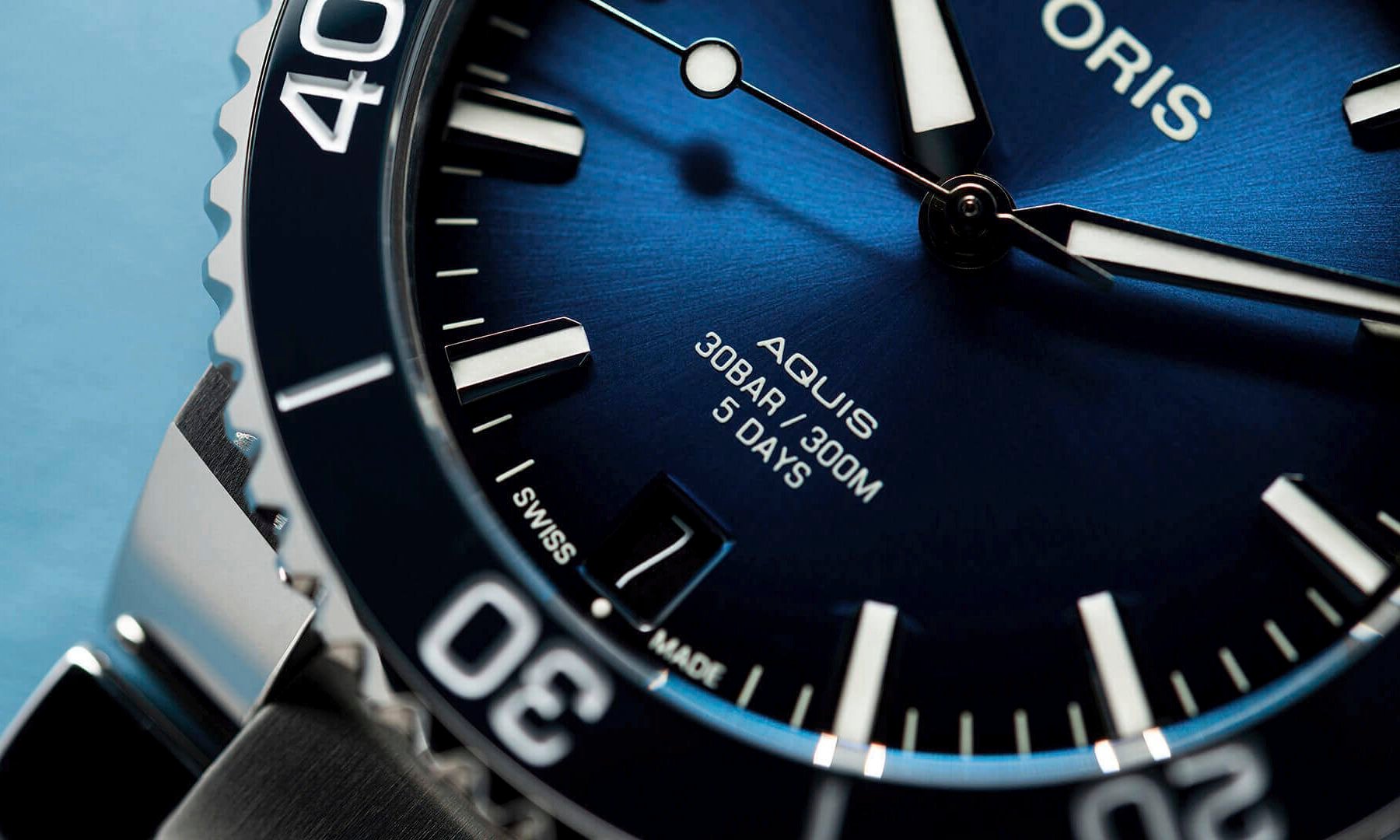 Not an exit watch

That’s not to say I won’t buy another watch ever again. As much as I entertain the notion of a one-watch collection, which my grail would comprise, I’m not letting go of the watches I already have without good reason. I’m also open to purchasing more watches in the future. The role of the Oris Aquis Date Calibre 400 as a grail is to become “the one” for me — a watch that encompasses all of my serious interests in watches. After that, I can play. I can explore novelties, funky fashion pieces, and yes, I might even get a Speedmaster. But I will do so resting assured that I’ve achieved my grail.

And you know what? The secret is that grails change. The (usually) unattainable nature of them makes that an easy adjustment to make. Once attained, however, it becomes a different matter. But if I purchase the Aquis and my grail does change, at least I will have had the opportunity to have my grail. That’s more than most knights can claim.