For $1,757 will you be the "El Primero" on the block with this classy chrono?
Michael Stockton
comments 0
Share

Wrist Game or Crying Shame returns with a look at an Ebel 1911 Chronograph.

Back in ’98, I was a fresh young face in the workforce, but a bit of hard work didn’t stop me from partaking in a bit of high-rolling high jinks.  It was during a long weekend that I packed my bag and made my way to the airport in “the 216,” aka Cleveland.  My buddy flew out of the mean streets of Newark and we met in Sin City.  Vegas.  Now, back in ’98, you could actually play black jack for $5 a hand on the Strip and stay at a hotel on that very street for a fair deal.  Nowadays, good luck with that as those prime location casinos are full of fancy pants partygoers and tattooed goofballs who “make it rain” with $100’s for as many hours as the casinos are open in one day (hint: that’s 24).  Clearly, folks, you felt that last week’s Omega Speedmaster 3210.52 “Casino Dial” belongs “off the strip” because you voted it down by a margin of 57% Crying Shame to 43% Wrist Game.  But perhaps we can change your fortunes with this week’s entry, the more affordable Ebel 1911 Chronograph.

Have you ever wanted to be the Don? No, I’m not talking about Don Juan, Don King, or whatever Fat Joe refers to in his lyrics.  I’m talking about Don Johnson!  Don Johnson was a fixture during 80’s life due to his portrayal of the suave undercover bad boy cop James “Sonny” Crockett on Miami Vice.  Now, I was a bit young for this show as it included some pretty steamy scenes (for broadcast TV), violence, and even a pet alligator!  But Don Johnson was a serious stud and in addition to driving some hot Italian metal around South Beach, he rocked some serious timepieces.  One of which was the Ebel 1911 Chronograph, one of the most badass watches of the era if I do say so myself (and I do).  Now, we have it on good authority that Ebel actually sponsored the actors, but let’s not let the facts get in the way of a good story.  I mean, look above – I didn’t even have to download that picture as our own Robert-Jan, who up until recently sported a very Crockett-esque wealthy man’s mullet, featured the Ebel in an article way back in 2010!  Ugh, the jealousy rages inside me towards those with such flowing locks! 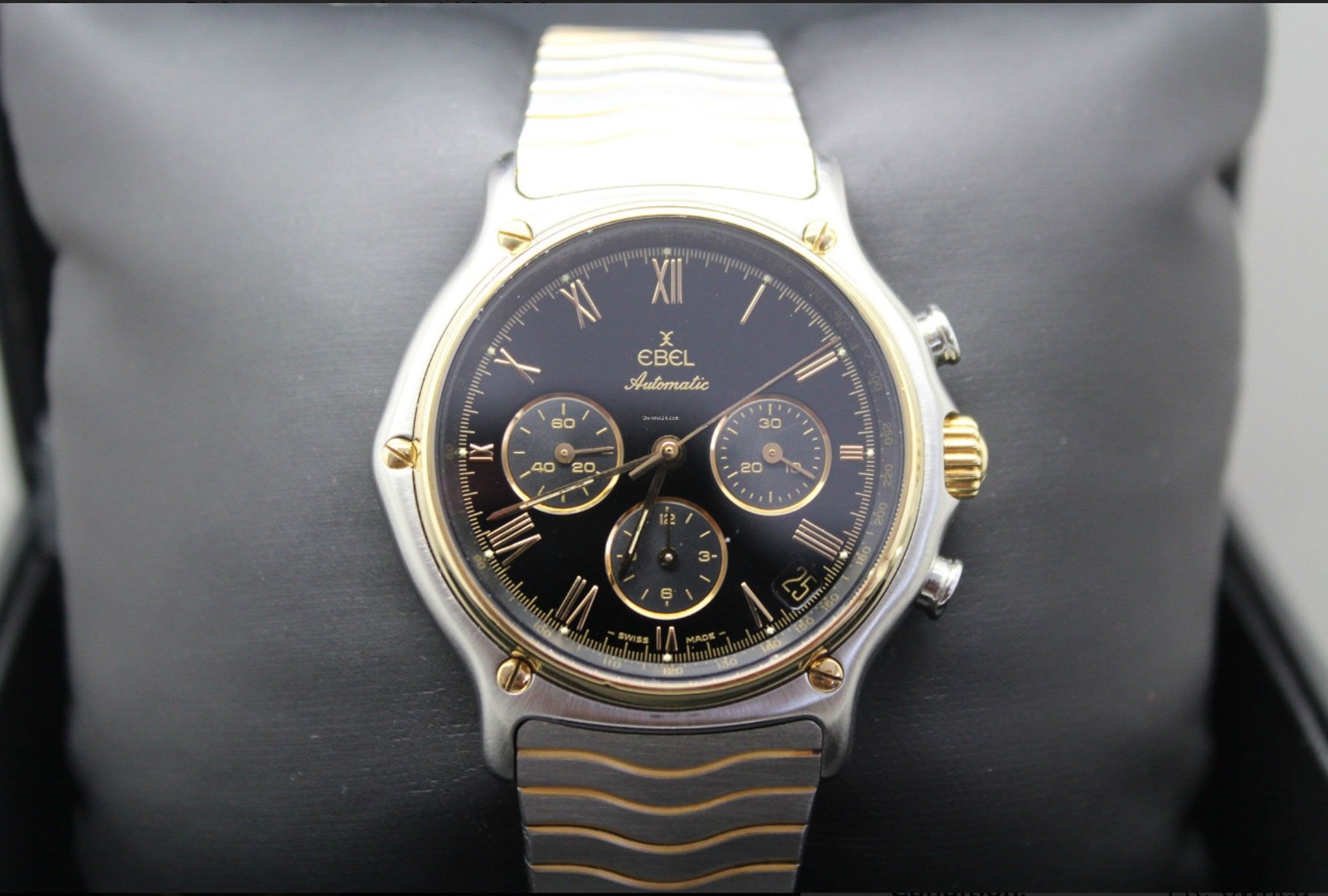 But the former main squeeze of Melanie Griffith isn’t the real reason to love the Ebel 1911 Chronograph.  No, you should love it for its unique and graceful styling shared with other Ebels, but most of all because of the engine under its hood.  The Ebel 1911 Chronograph featured – wait for it – the one and only El Primero chronograph made by Zenith.  If you believe this excellent watchuseek post from user “Rdenney”, Ebel’s President Pierre-Alain Blum was the man who coaxed Zenith to begin reselling its famous movement again in the early 80’s after the brand had gone through financial turmoil.  The post goes onto suggest that in 1982, Ebel began buying some of the El Primero movements that Zenith had stockpiled and installed them in the Sport Chronograph you see here. 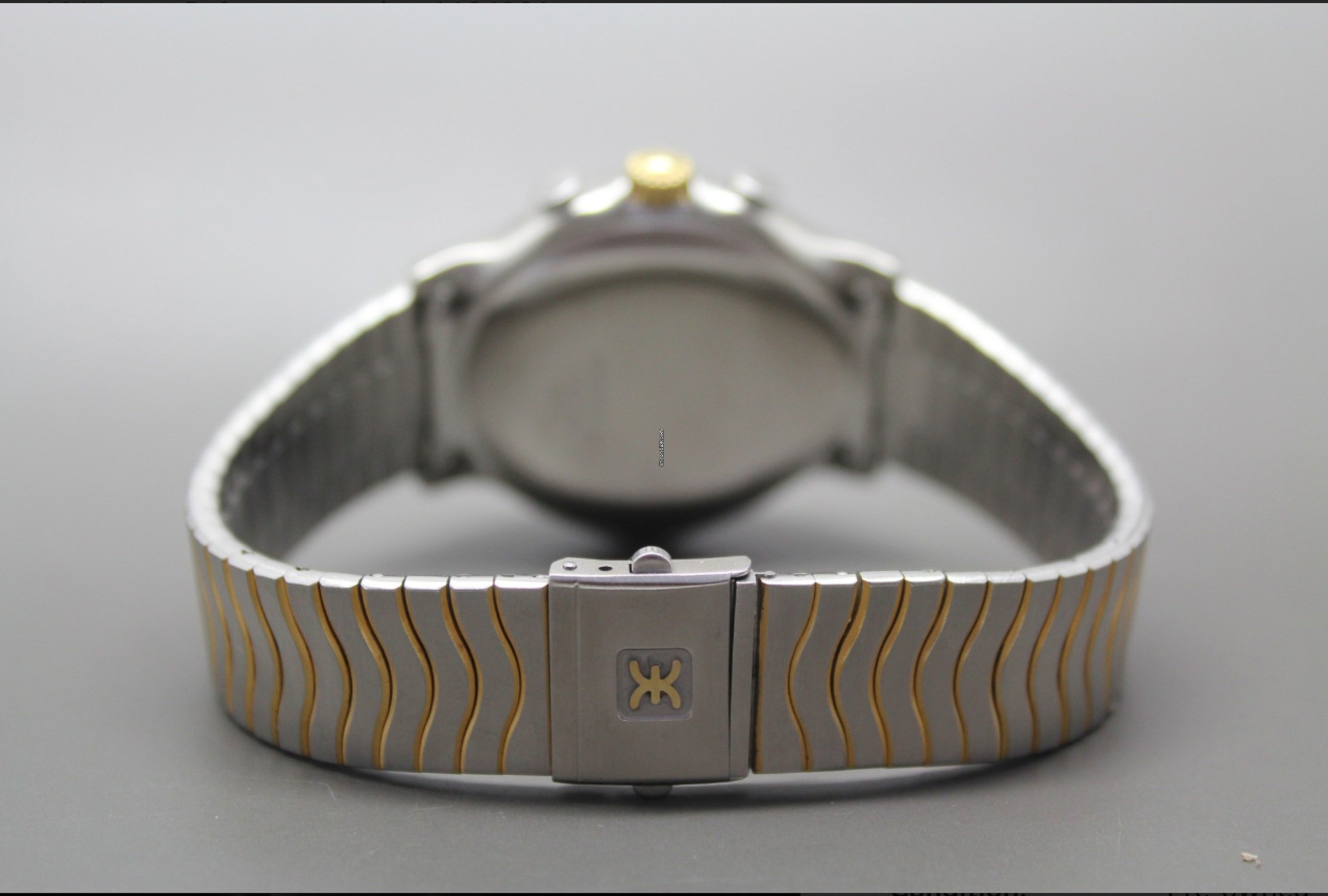 By the way, user “Rdenney”, you sound like you have one hell of an Ebel collection and I’d love to crack an era-appropriate beer with you.  Let’s just say that during this time, “the night belong(ed) to Michelob.” 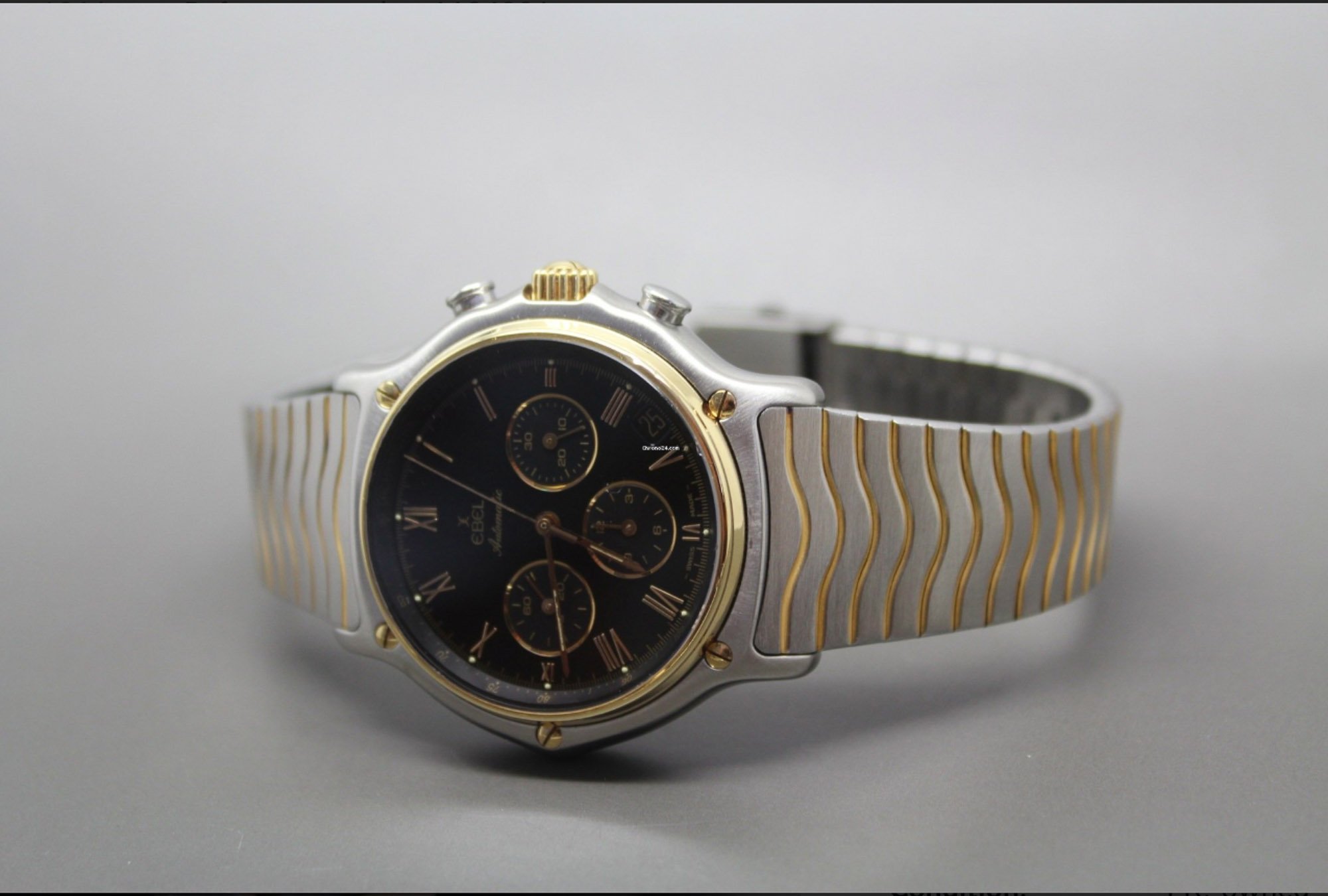 Returning to the Ebel 1911 Chronograph, Ebel offered these pieces in a wide variety of dial colors, bracelet types, and raw materials.  Steel, bi-color, and solid gold were there for your perusal if you visited your local high-end jeweler.  In reading that same post above, it also seems that Ebel used a number of different El Primero variants in their chronographs – perhaps as stock dried out while Zenith made some strides as they returned to making watches.  Yes, the brand that’s also known as “The Architects of Time” once shared space next to vaunted brands like Rolex (who also made use of the El Primero in a slightly more valuable chronograph). 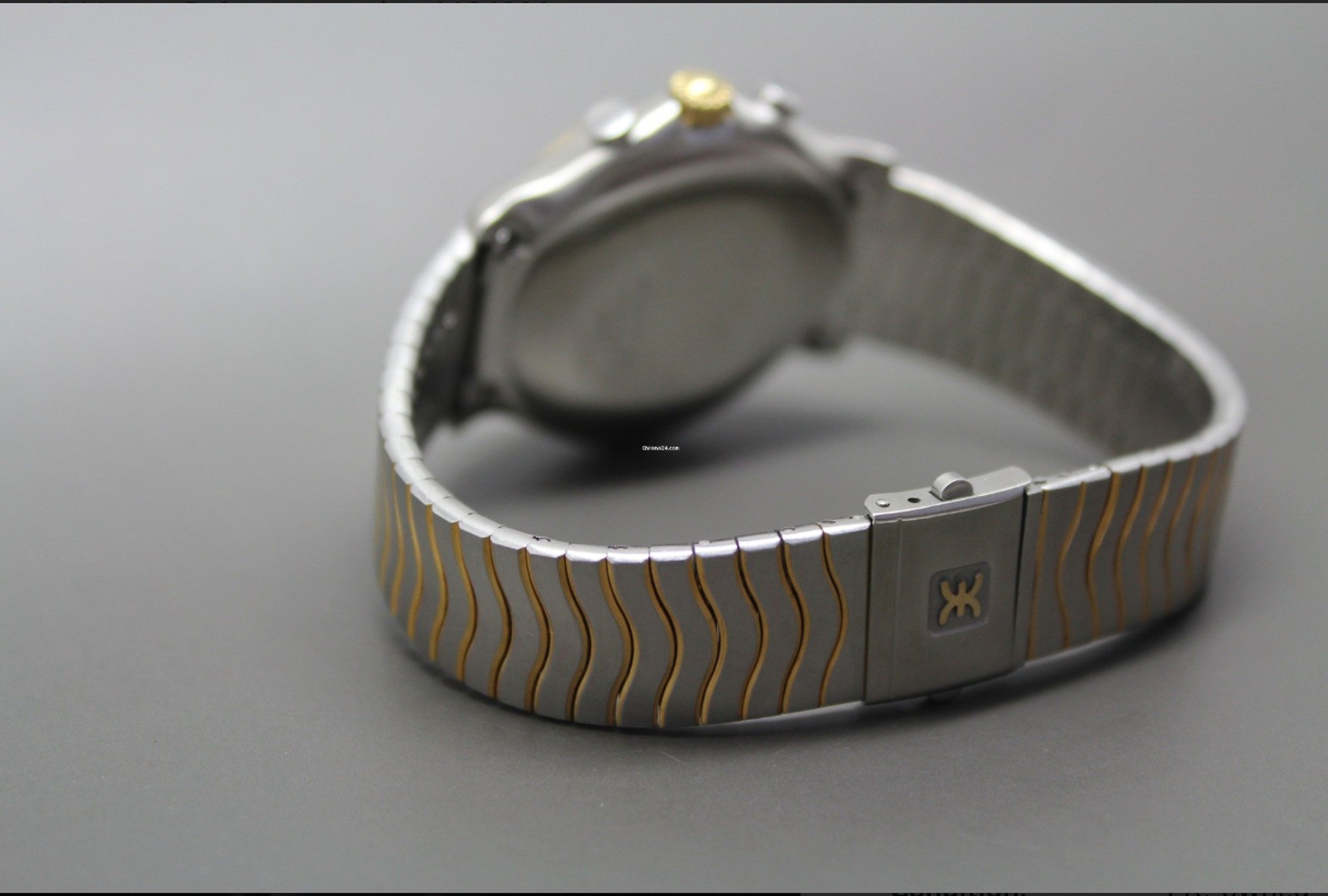 The model we feature today happens to look like an earlier model as it features the brand’s gorgeous Wave bracelet that, in addition to the iconic case shape, is a real hallmark of the period.  Yes, it’s bi-color, so it’s not consistent with “the Don’s” all gold, so perhaps you’d be seen as a pretender.  But that’s ok, as Johnson rolled around in a fake Ferrari Daytona Spyder in the earlier seasons, so he’s no stranger to nearly-there looks. 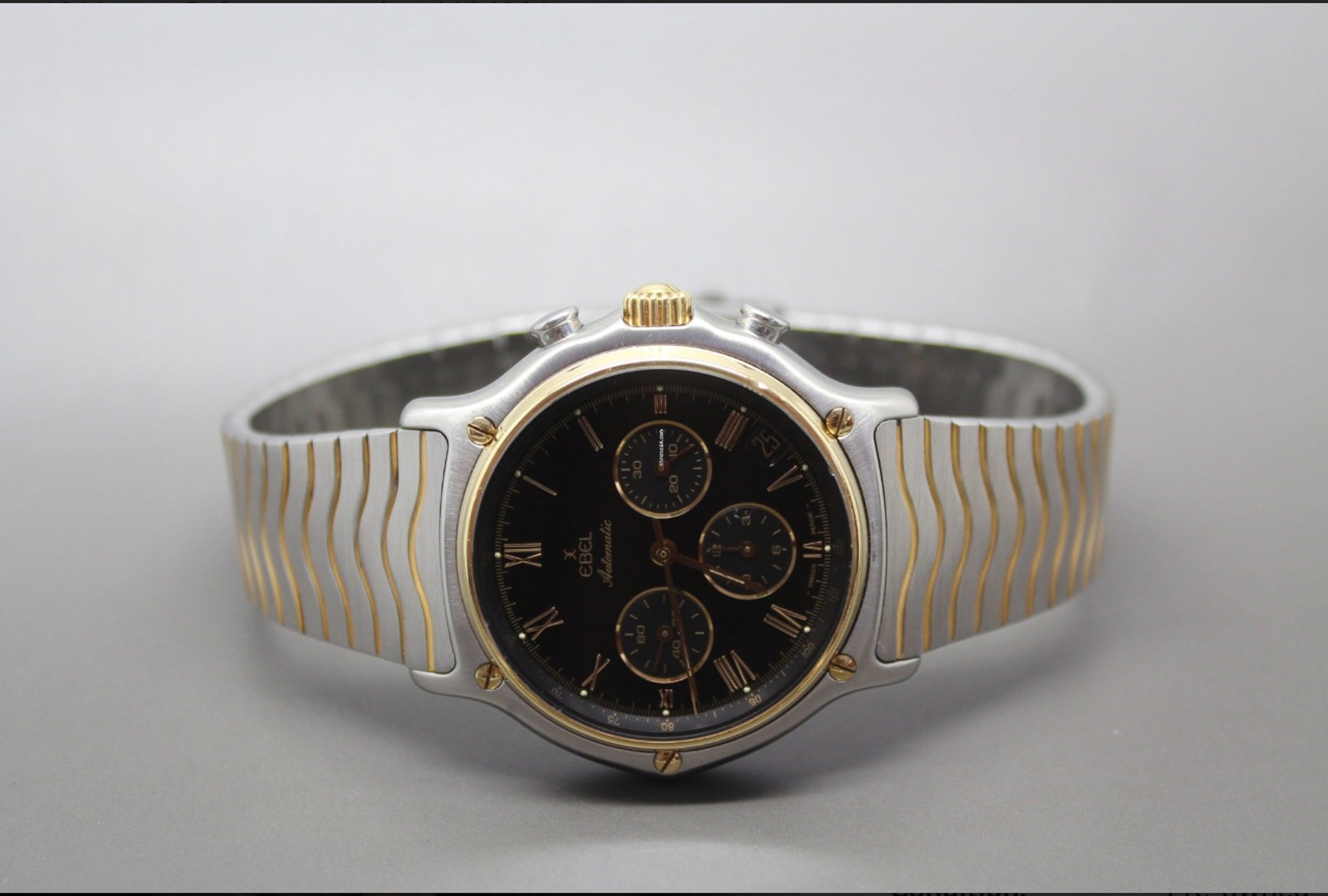 We know somewhat little about the Ebel 1911 Chronograph that’s featured here on Chrono24, aside from the fact that the 39mm watch supposedly runs well and it looks to be in beautiful shape.  It’s also located in the knife capital of Germany, Solingen, and is being sold by a well-rated dealer who does seem to know his way around a camera (the photos are the property of the dealer and our header and white-dialed variant come from Catawiki).  Now, my experience with an El Primero has been a bit like owning Sonny’s ride in later seasons, the Ferrari Testarossa.  In other words, it runs fast, makes all the right sounds and breaks down a lot.  Then again, mine is a really old Zenith.  But the real saving grace on this Ebel is that it costs $1,757 as of today’s exchange rates.  That’s a lot of “smiles per mile” as we say in the business.  And finally, while it’s been some time since Ebel has had its day in the sun, one has to believe that something this good looking will come back into vogue at some point. 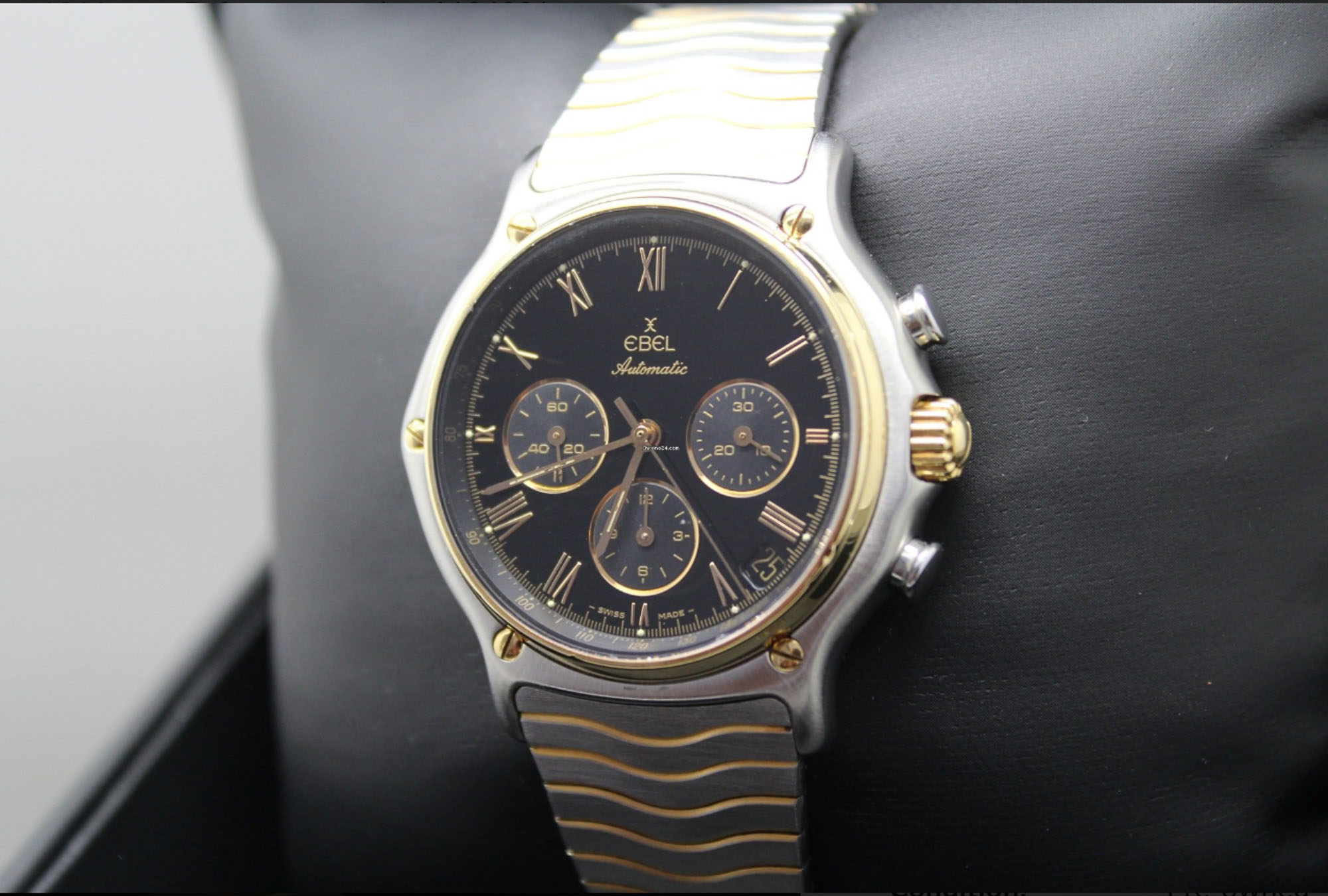 Now it’s up to you on whether you’d spend $1,757 on this classy, complicated relic of the 80’s, the Ebel 1911 Chronograph, in order to beat the heat on the Miami streets.