Are you feeling artsy fartsy for €709?
Michael Stockton
comments 0
Share

Wrist Game or Crying Shame returns with a look at an iconic timepiece in the Movado Museum Watch. Let’s see if you’d like to become a supporter of the arts with your vote. But first… 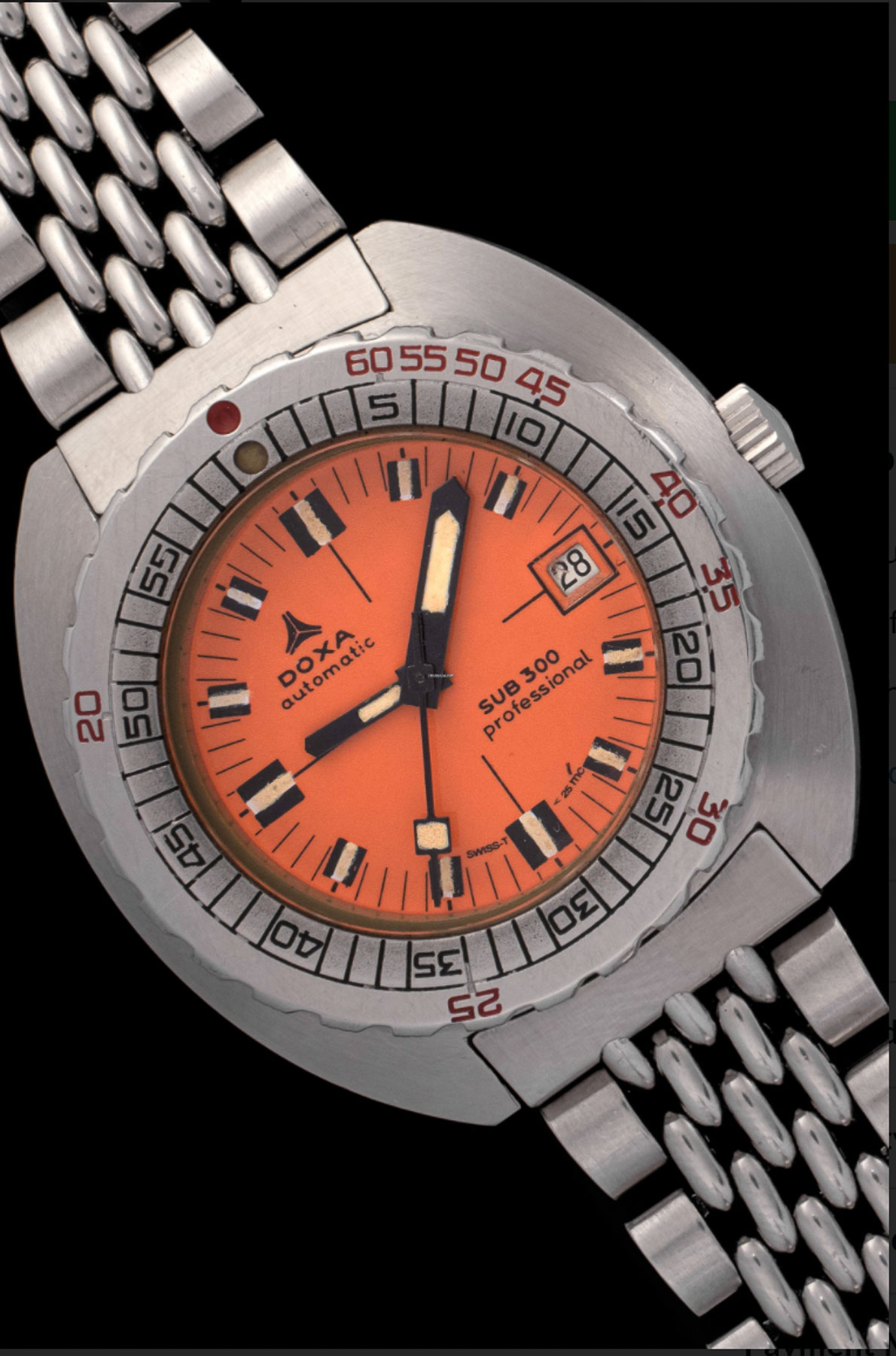 Last week, I showed you a decent but potentially altered Doxa SUB 300 Professional for €3,500. After some hemming and hawing, you folks saw it fit to award the old salt a 62% Wrist Game win. Orange you glad you voted? Now that’s enough of the jocularity. It’s time to get all sorts of “nose in the air” like a proper patron of the arts. You know the type. They’re the snooty folks who proclaim to see something deep and profound from a piece of “art” that looks more like a dog’s doodling. Today, we have a real piece of art in the Movado Museum Watch. Its importance will be put to the test in our voting section. 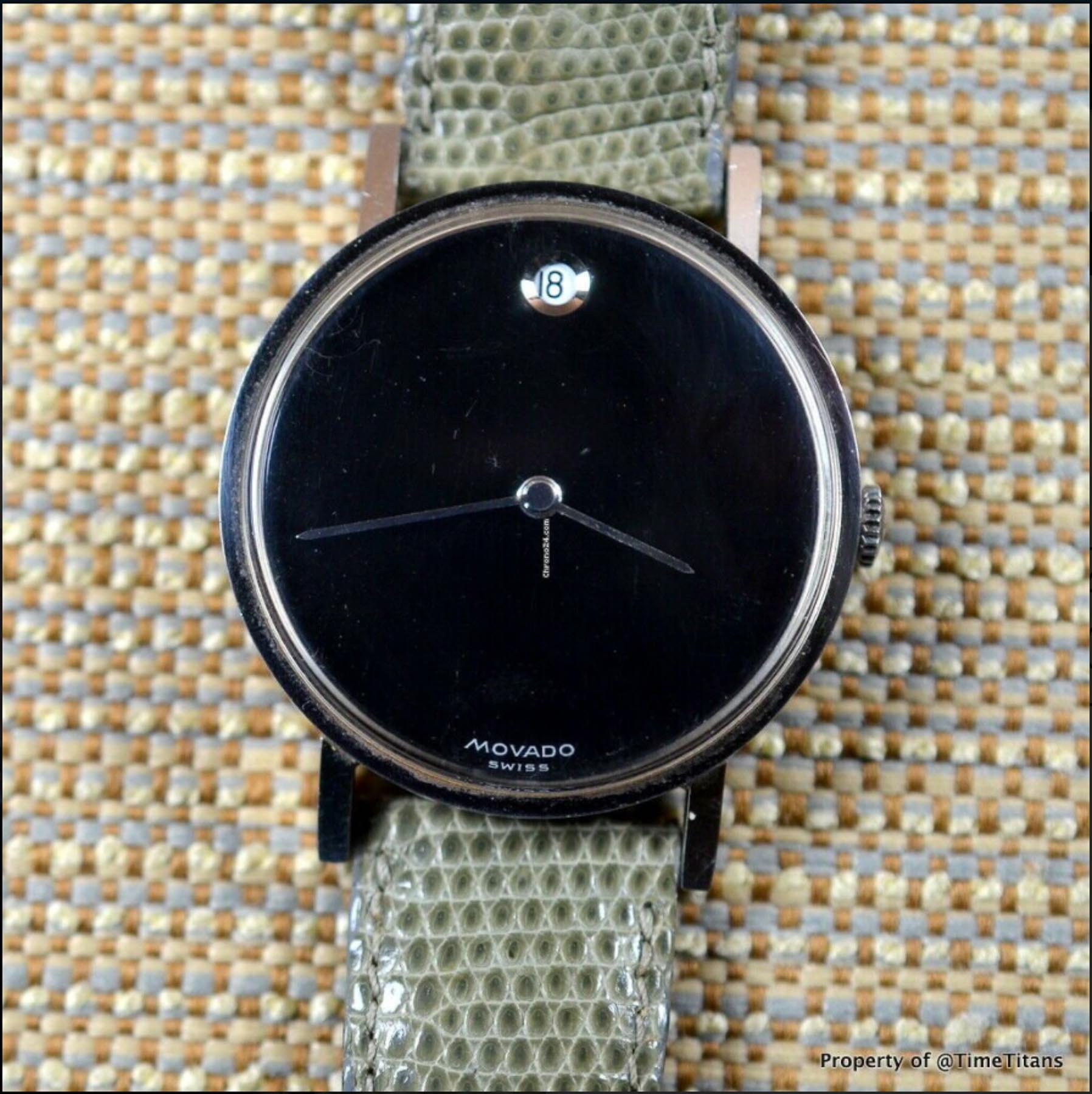 The Movado Museum Watch was first produced way back in 1947 by known designer Nathan George Horwitt. The Bauhaus-influenced watch with black dial, hour and minutes hand and a simple dot at 12 o’clock was produced by others before Movado picked it up at some point during the 1950s. Movado didn’t exactly treat old Georgy boy too well considering he designed the watch that basically carried Movado through multiple decades, but if you want to find out more about Horwitt’s troubled relationship with Movado I kindly refer you to google. New York’s Museum of Modern Art bestowed high honor on the original Movado Museum Watch in 1960 by making it part of its permanent collection. That kind of credibility is sure to impress both the hoity-toity as well as the struggling hipster crowd. But like most artists and their artwork, something happened over time with the once impressive Museum Watch. 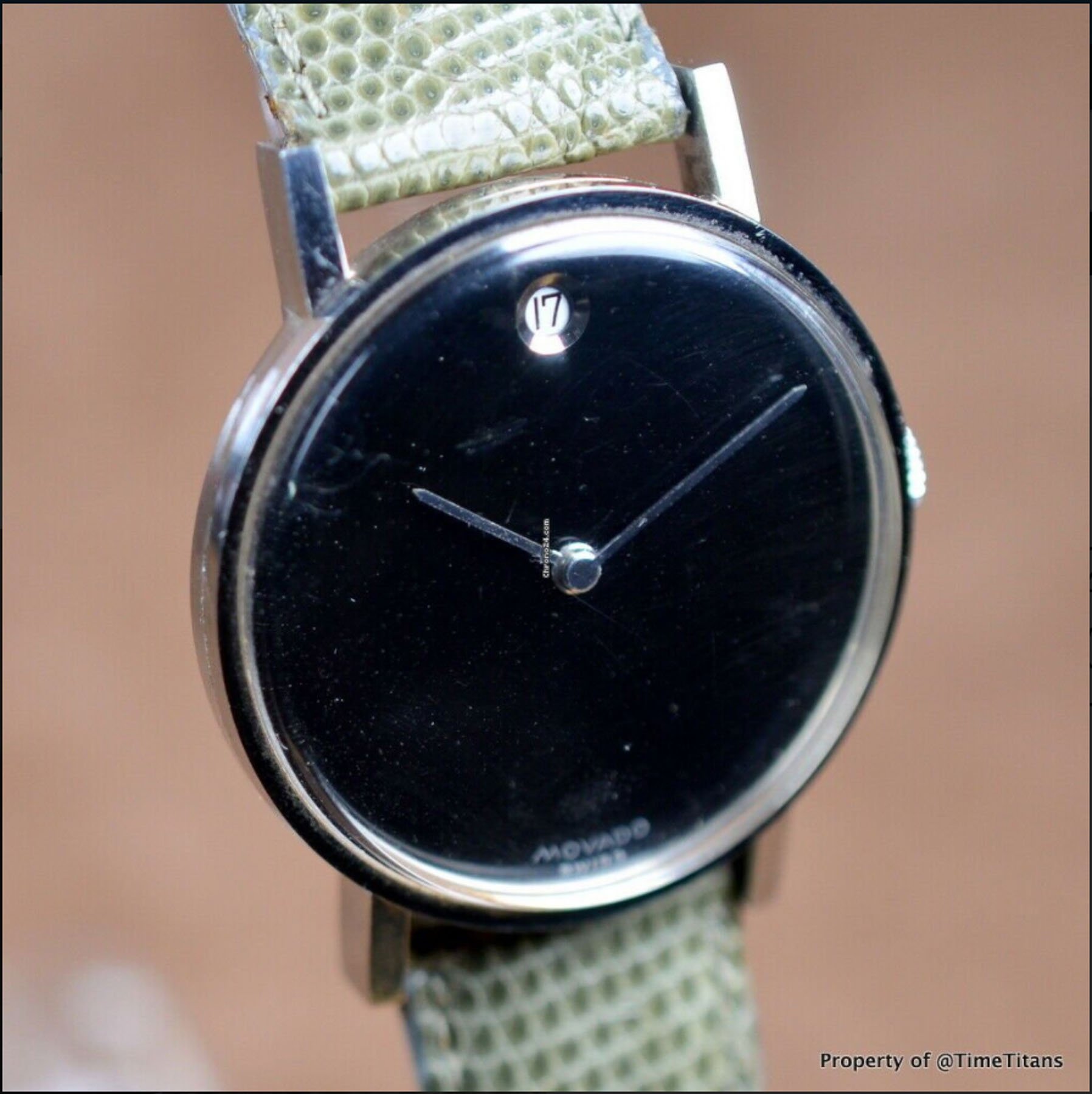 The original Movado Museum Watch was naturally mechanical and featured a manually wound movement. It was also lithe and simple. Over time, though, as Movado sought to capitalize on its rainmaker, the watch grew into something far less graceful. A quartz movement was added and the simple dial was thrown into all sorts of case designs, sizes, and shapes. In the 1980s, the Museum Watch probably hit peak popularity as the look somehow translated well into thin, often two-tone, men’s watches.

If you think of pieces of the time from Rado, Ebel, and others, the Movado was very heavily in the mix. A man with billowy pleated trousers, woven loafers, silk shirt, and an hour with the blow dryer and Vidal Sassoon hair spray simply couldn’t leave the house without such a watch. 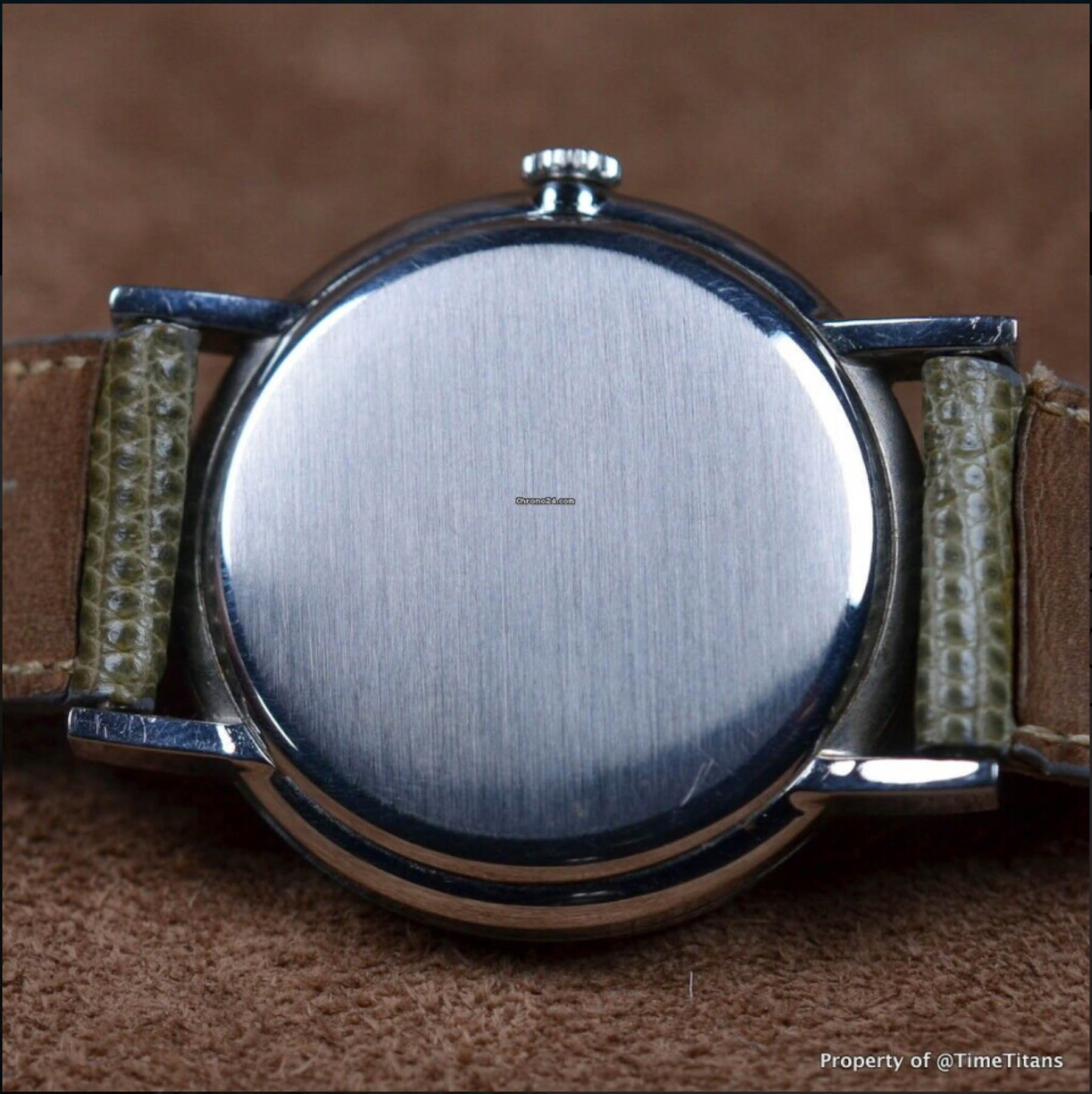 A quick jaunt to the Movado site shows some decent looking pieces in the Classic line, but they’re all quartz. Sport versions abound with the “dot” resignedly holding fort up at 12, but these are really questionable bastardizations of a once-proud design. Thankfully, the trusty internet can provide us with some decent vintage pieces. 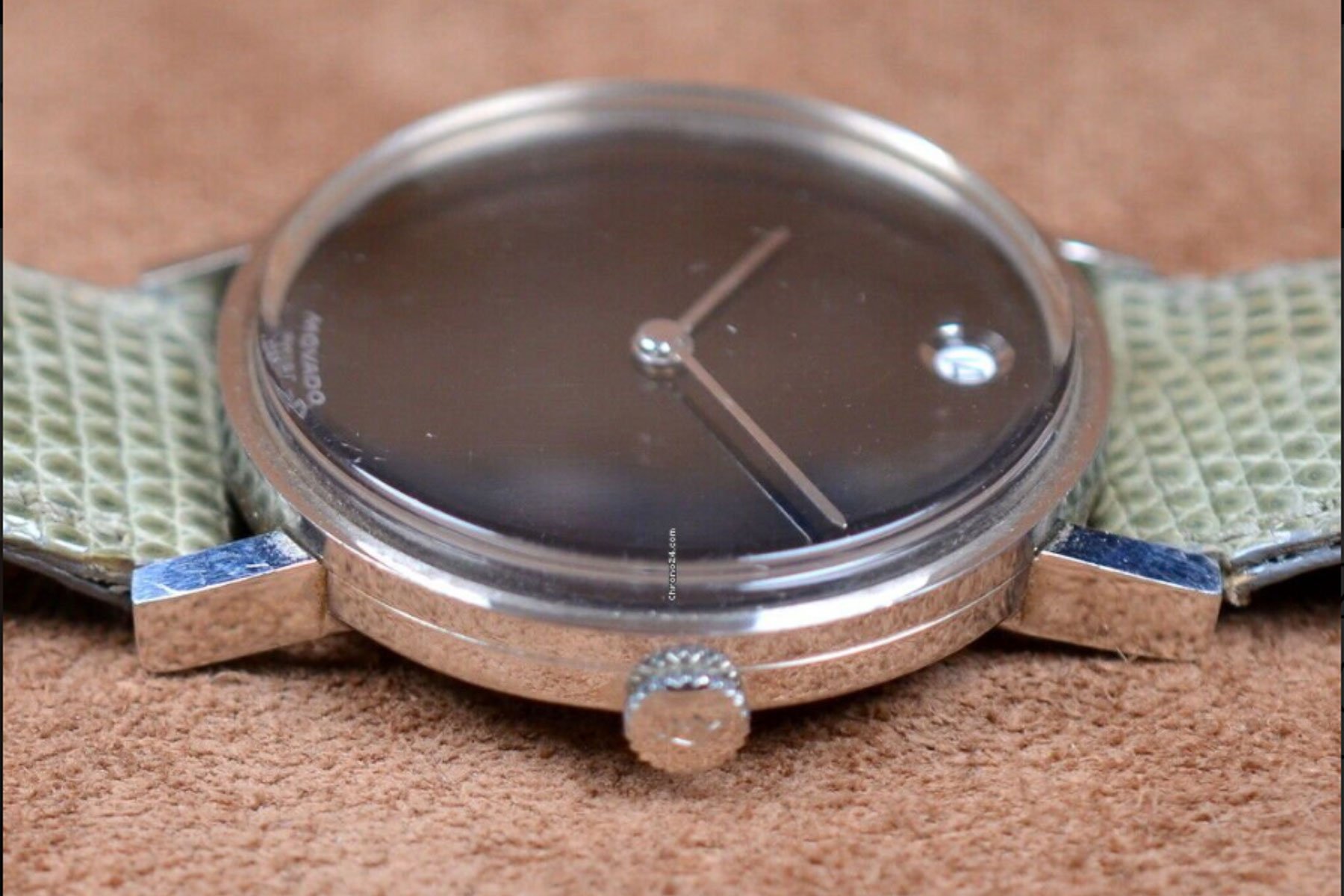 Today, via Chrono24, we’ve found what is likely a late 1960s Movado Museum Watch with a hand-winding Zenith 1740 movement (they were partners at one point). Time Titans is the seller and provider of the pictures. They hail from Portland, Oregon and happen to be near the city’s Deschutes Brewery location. How I’d love to be there with a beer in one hand and a Voodoo Doughnut in the other right now. I digress…

The watch we have for you comes in a then-standard 34mm diameter and is constructed of not-so-common stainless steel. You can even see it has the original Movado crown. What tells us that this watch is a slightly later edition is the addition of a date within the famous dot. I find it subtle and absolutely ok.

What’s nicest about this Movado Museum Watch, aside from its very Mad Men grey-green lizard strap, is that it only costs €709. This translates into one of those rare opportunities where you can check the box on both iconic watch design and collectible art. If I haven’t yet whet your appetite yet or wet your trousers, get ready for another hipster buzzword. You can absolutely kill it at the local mezcal tasting/Japanese denim meet up/Leica coffee klatch with this watch because it could be considered — wait for it — mid-century modern.

Now it’s time to vote on the Movado Museum Watch and whether you feel it rates as iconic or idiotic.

Hot Topics
Everyone Needs At Least One Of These Iconic Dress Watches In Their Collection — Top Picks From Cartier, Rolex, Grand Seiko, And More
115 comments
The Omega × Swatch Speedmaster MoonSwatch Six Months On — Is The Hype Still Alive?
85 comments
Introducing: The New Omega Speedmaster X-33 Marstimer
80 comments
Not Every Watch Enthusiast Needs To Own A Rolex
70 comments
The Best Of The Bunch — Meet The New Omega Speedmaster ’57 In Blue
64 comments
Popular
10 Tips For Better Watch Photography
Bert Buijsrogge
11
Two Patek Philippe Nautilus Watches: 3700/1A Versus 5711/1A
Robert-Jan Broer
16
Rolex Submariner Hulk versus Seiko SLA019 : Shades of Green
Michael Stockton
26