Will you feel the thrill of this De Ville for $3,500?
Michael Stockton
comments 19
Share
Wrist Game
Crying Shame

Welcome back to Wrist Game or Crying Shame where you’re the head honcho in charge. This week, we look at a rather unique Omega De Ville Power Reserve. But first…

Last week, I did my best to give you the right implement to sail the ocean seas with a Rolex Yacht-Master in gold. I rocked back and forth like a ten foot skiff on Lake Erie during a squall with my opinion on this thing. You landlubbers, however, sent this master of galleons down to Davy Jones locker with a 32% Crying Shame loss. It seems the only thing this watch was master of was losing! Well, let’s keep some of the glitz this week, up the technical quotient, and lower the price. Sound good? Then let’s get into the Omega De Ville Power Reserve. 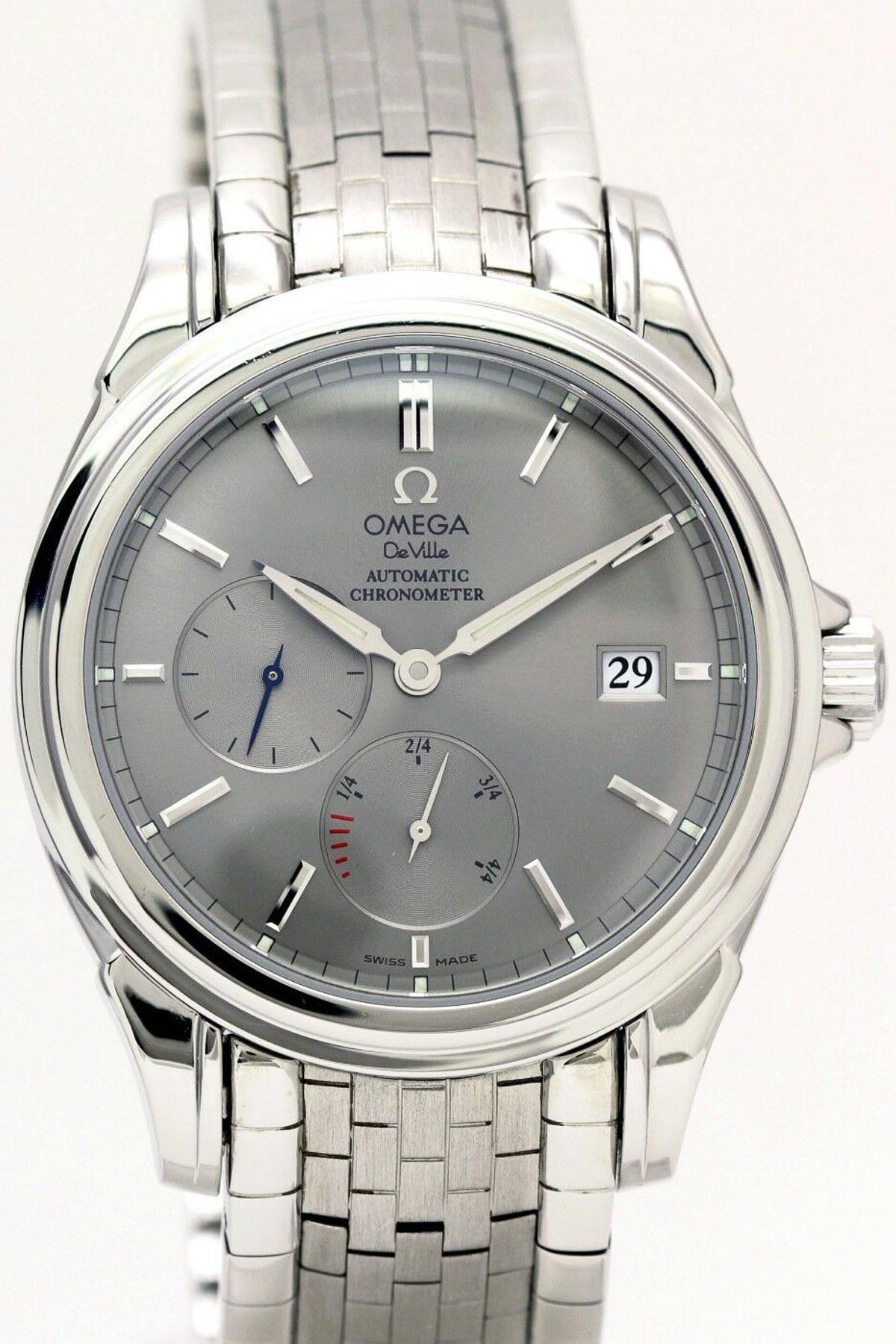 I’ve mentioned that I have a real penchant for finding the oddballs within a given brand’s catalog and today’s De Ville meets that criteria. Yes, it’s good that watch companies also hire people who like weird imbalanced things who then convince management to grant their flights of fancy. If that makes no sense to you then take a visit to our inaugural Wrist Game article where we featured the “casino dial” Omega Speedmaster. That watch and today’s funky number definitely make me think that the Omega employee holiday parties of the 90’s were well worth attending! 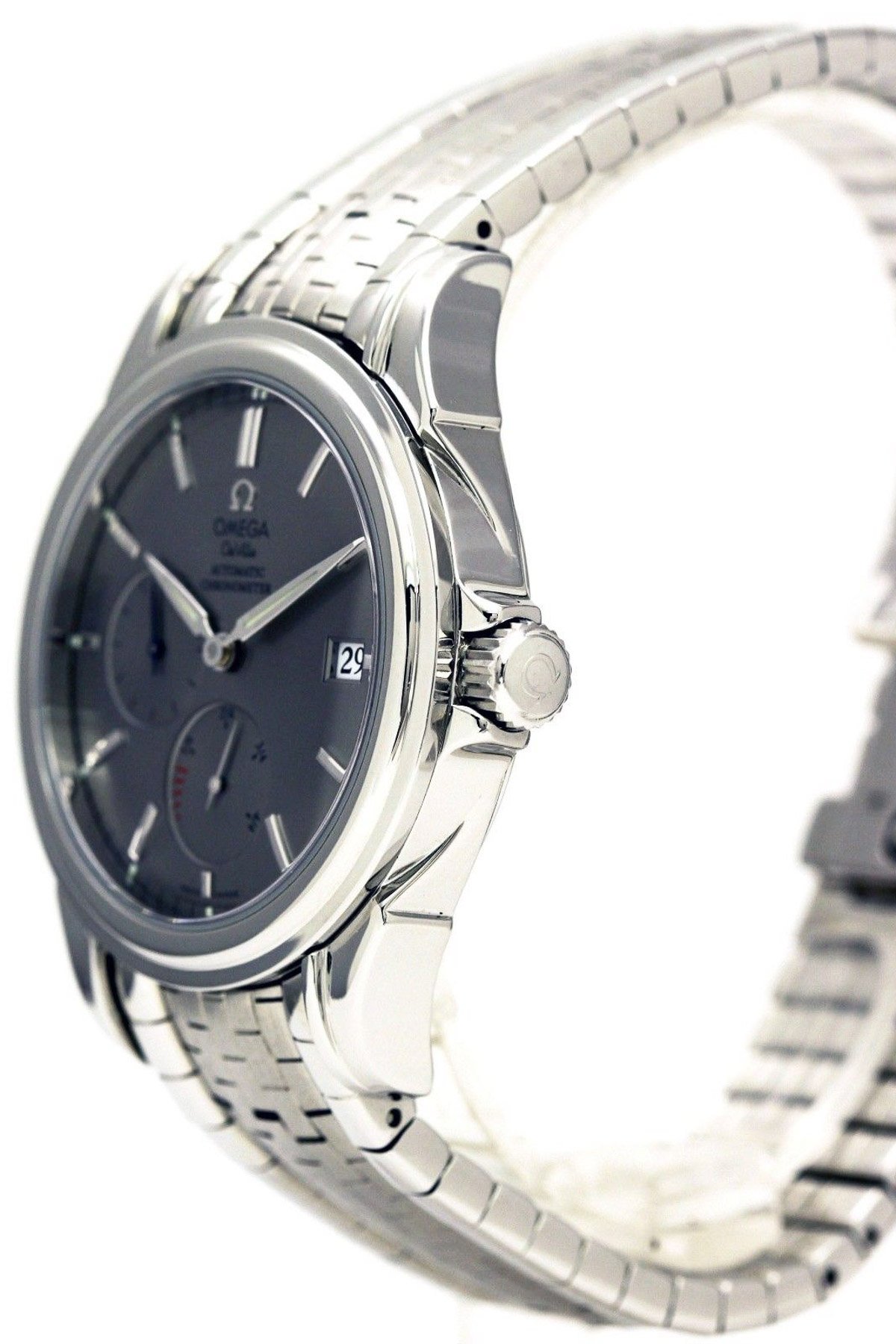 The hyphenated word “Co-Axial” is such a part of the Omega lexicon now that it’s hard to believe that it’s only been with them since 1999. When the George Daniels invention debuted in a gold De Ville with a very similar case as today’s piece, it marked a huge step for the company. Unfortunately, those chronometer certified caliber 2500 movements had their share of issues owing to lubrication on the escapement. Thankfully, Omega did the right thing and fixed them when and if they failed. Aside from that, these early pieces had good bones because the co-axial was attached to the tried and true ETA 2892. 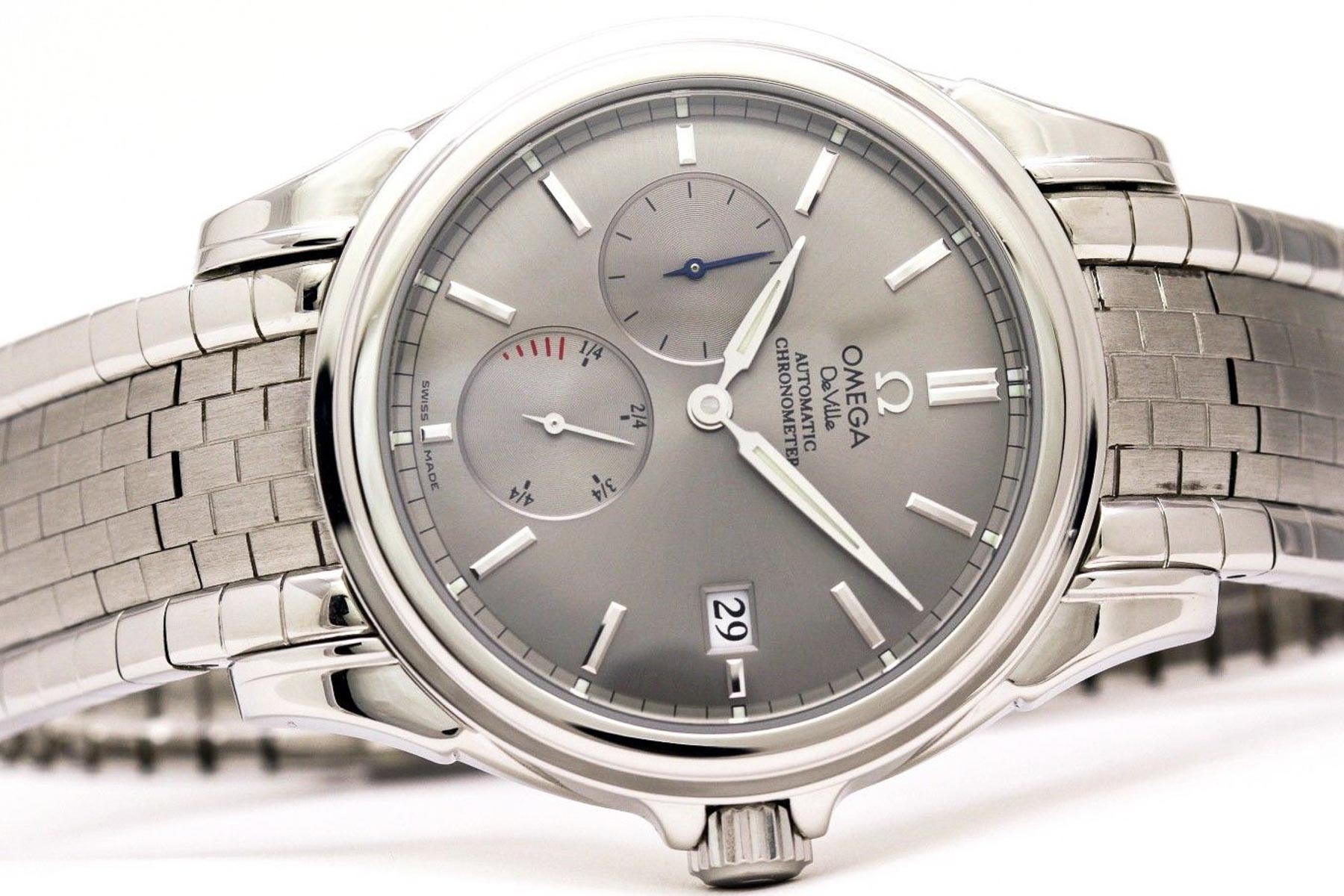 The De Ville has always been a dressier model for Omega was originally a sub line of the Seamaster. At some point, it broke out and began to gain its own identity. I think you’d agree that today’s example is certainly one of a kind. By the late 90’s and into the 2000’s, Omega debuted the somewhat ornate case design that you see here. With horned lugs, a 38.7mm case, and a thickness of somewhere around 11mm, it’s nicely sized. And with a sapphire crystal, screw-in case back and 100 meters of water resistance, it’s even versatile. 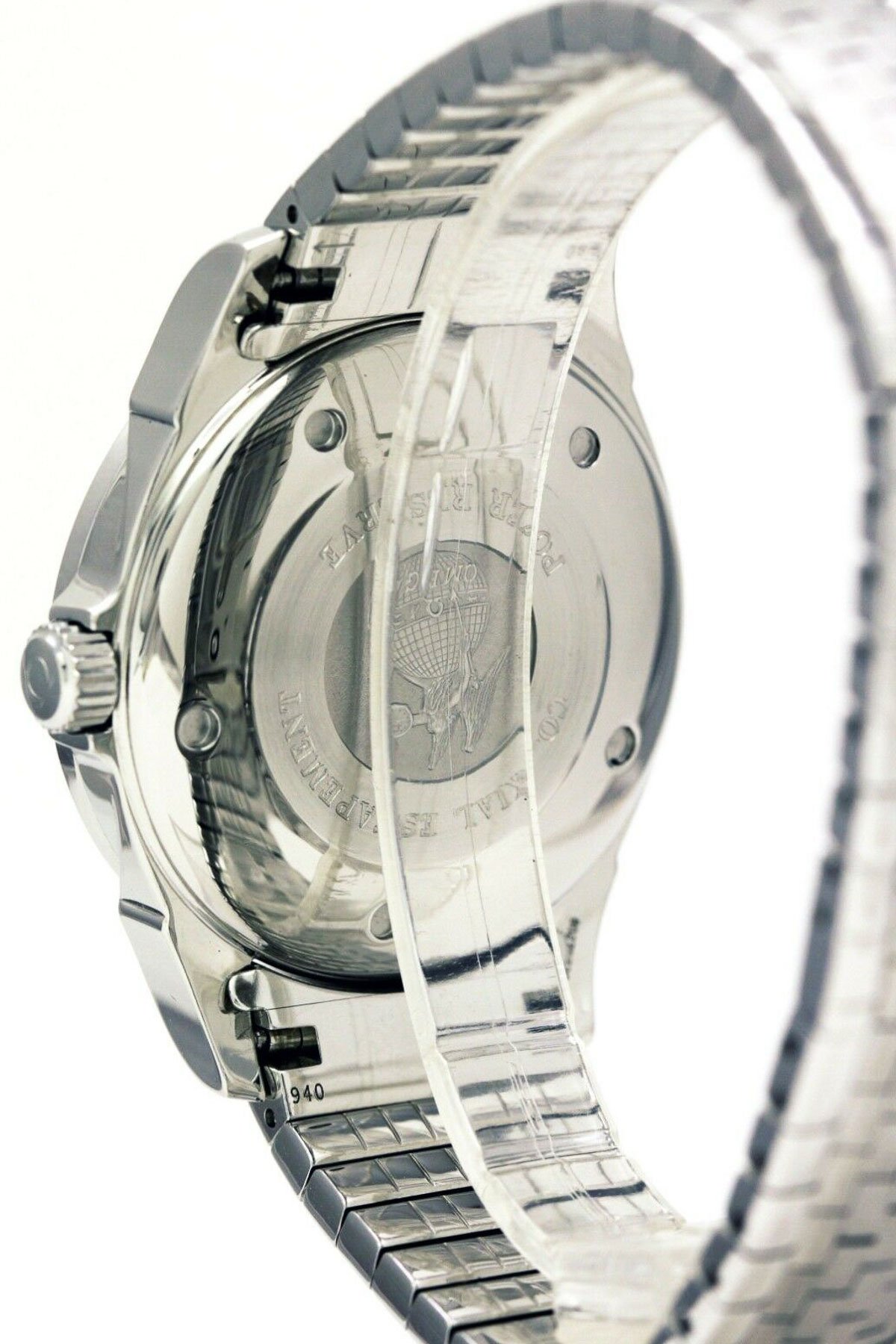 Omega offered all sorts of watches within this De Ville line in steel or gold such as a simple three-hander, a chronograph, and even a GMT. But my favorite has to be this somewhat oddly-dialed power reserve model. With a seconds hand sub dial at 9, a power reserve meter at 6, and date at 3, I’d call it delightfully imbalanced. Seriously, look at this thing and tell me that you could picture a modern Omega with this reckless abandon for symmetry! Lume-filled hands and pips around the edges add just the right degree of sportiness to an otherwise formal face. 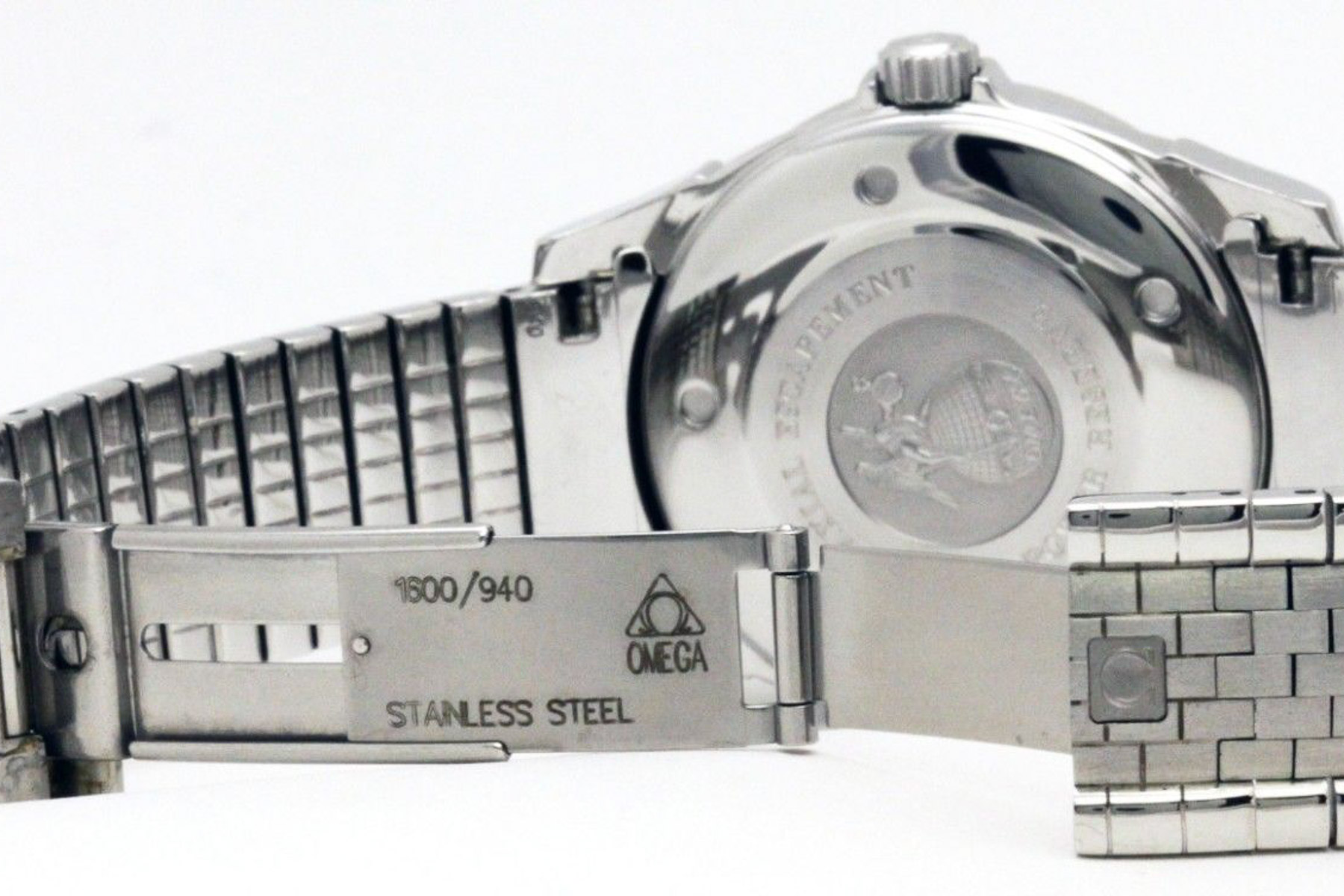 Now, one could buy the De Ville power reserve on leather. I mean, that’s what the person in a grey suit, white shirt, rep tie, and wingtips would do. But what a damn shame that choice would prove to be when something like the “Brick” bracelet could be had. Seriously, when you can have Elvis’ lamé suit as a bracelet straight from the factory — well, you must. This hunk of burning masonry features polished outer links and matte inners. The clasp is flush and can be opened with a side mounted button. From here, it looks like a work of art. I’ve never truly been sure that it actually fits the rest of the watch, but I’d probably rock this 19mm wide accessory on a Swatch if it would fit. 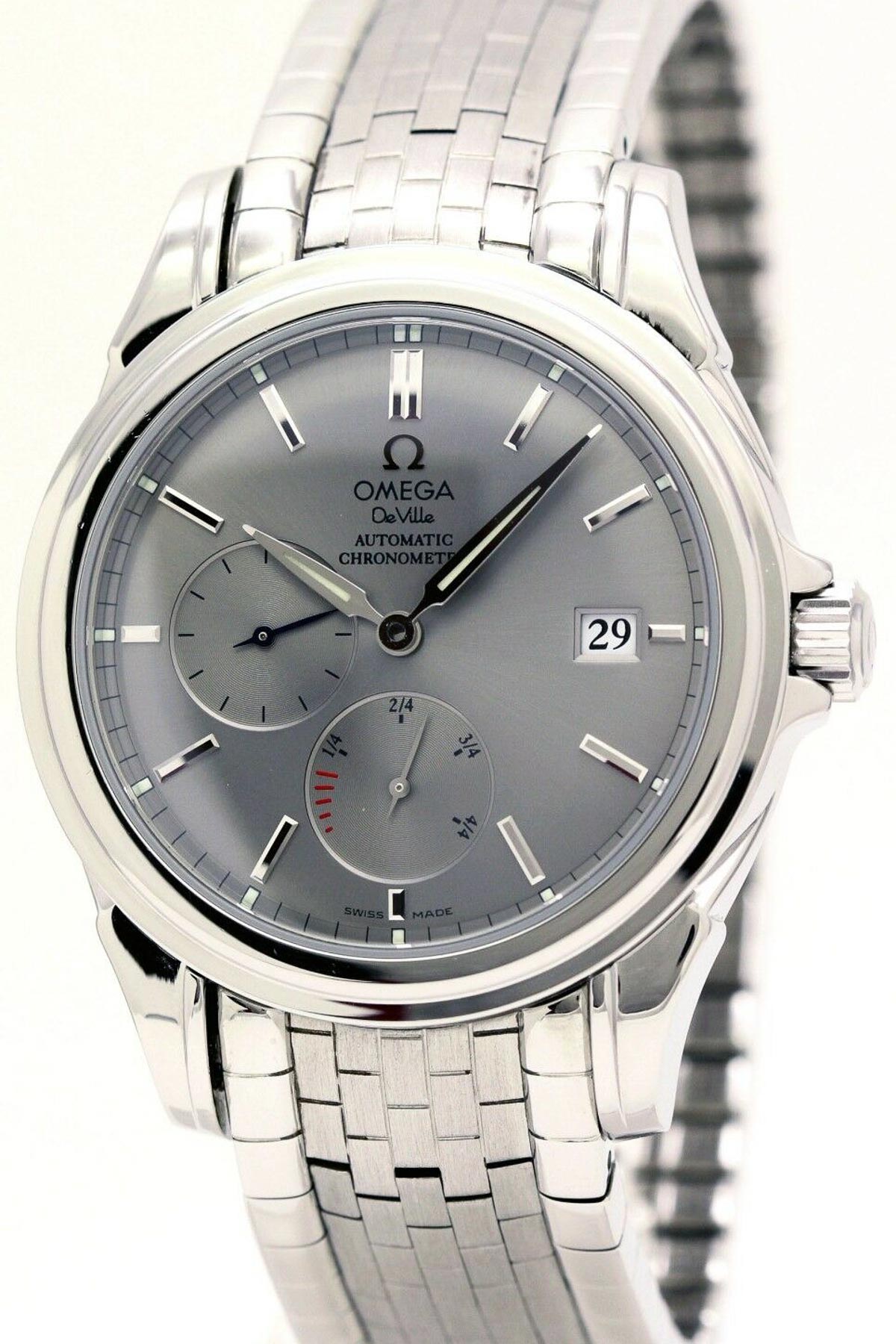 Not easy to find

Perhaps due to it odd looks and pricing above $4,500, the De Ville power reserve isn’t an easy find. I truly had to search for today’s example and when I’ve looked in the past, it’s also been a chore. Today’s piece is actually sitting on eBay in the USA and the watch and pics are courtesy of seller jjjrw238. The seller does have 100% positive feedback for whatever that’s worth. These were available with several different dial colors, but I am partial to this dark grey version. I think it looks amazingly classy. At $3,500, it isn’t cheap and it’s lacking box and papers. On the other hand, it looks like it’s in beautiful condition. And, like I said, they’re not common. The movement has been serviced and it comes with some sort of 180 day warranty, so that sounds pretty good.

Look, you know that I like this funky Omega De Ville. But now it’s your turn to decide whether this glitzy oddball is worth your consideration.