Ahoy, and welcome back to Wrist Game or Crying Shame where there’s no pop quiz on the direction of port side versus starboard. We will allow for some nautical appreciation, though, with the Rolex Yacht-Master in gold. But first…

Last week, we also had an Oyster-cased marvel on the show with the Tudor Big Block. It was a close one, but the chunky chrono squeaked by with a 54% Wrist Game win. I predict that today’s Rolex Yacht-Master will prove to be no less polarizing. Let’s set sail and head to the open seas — or at least look at them from the terrace of a 5-star resort. 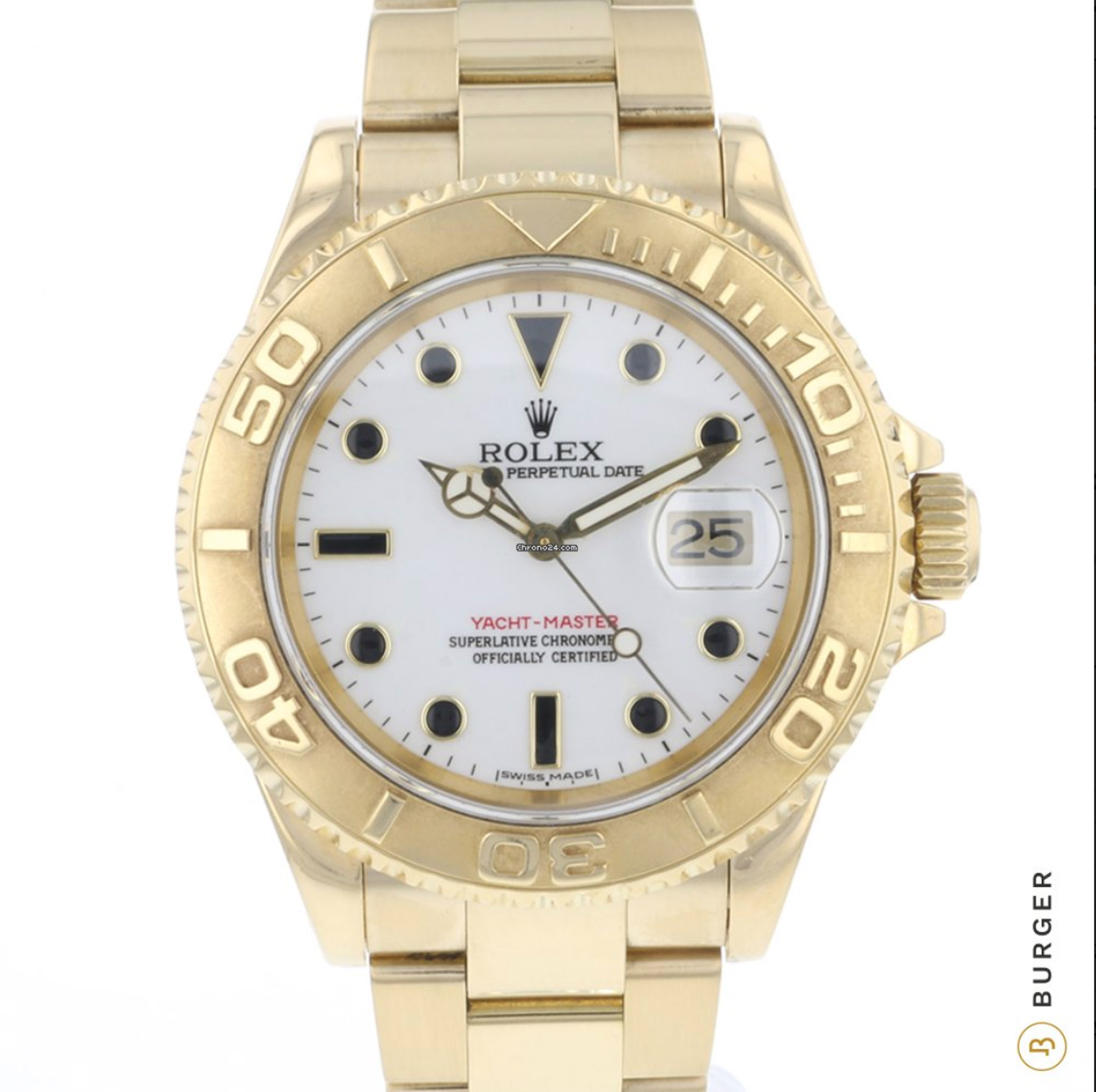 You know what? I have never gotten the point of the Rolex Yacht-Master. If there’s one watch in the brand’s entire line-up that panders to showy champagne-sipping, sleep-until-noon Worth Avenue denizens it has to be this model. It’s easy enough to get one’s head around the GMT-Master, Submariner, Explorer, and Daytona, but the Yacht-Master boasts almost no functionality that would make it especially good for sailing. Well, unless your idea of sailing is having someone else do the work! So how did this watch get its start? 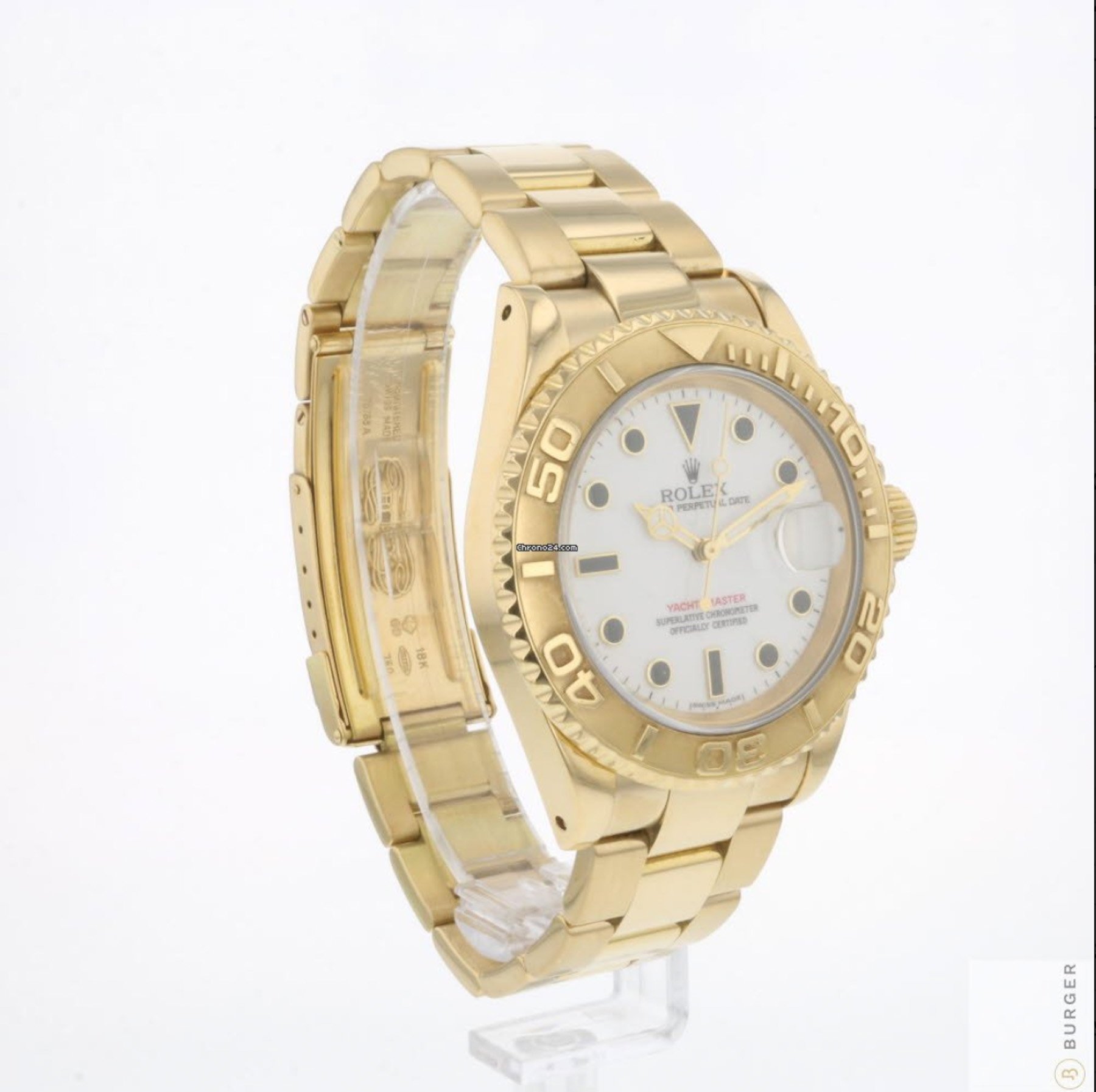 History class is in session

Heading over to Bob’s Watches, we see that the Yacht-Master first unfurled its sails in 1992 as reference 16628. Lore tells us it was actually designed decades before as a possible Submariner, but was likely rejected due to its forward design. Ha! That progressive move basically consisted of an all-metal 60-minute bidirectional bezel. Otherwise, the watch came in 18K yellow gold and 40mm on an Oyster bracelet. At the beginning, Rolex only offered a white dial with onyx markers and the familiar Mercedes hands. A trip-lock crown ensured water resistance down to 100 meters. 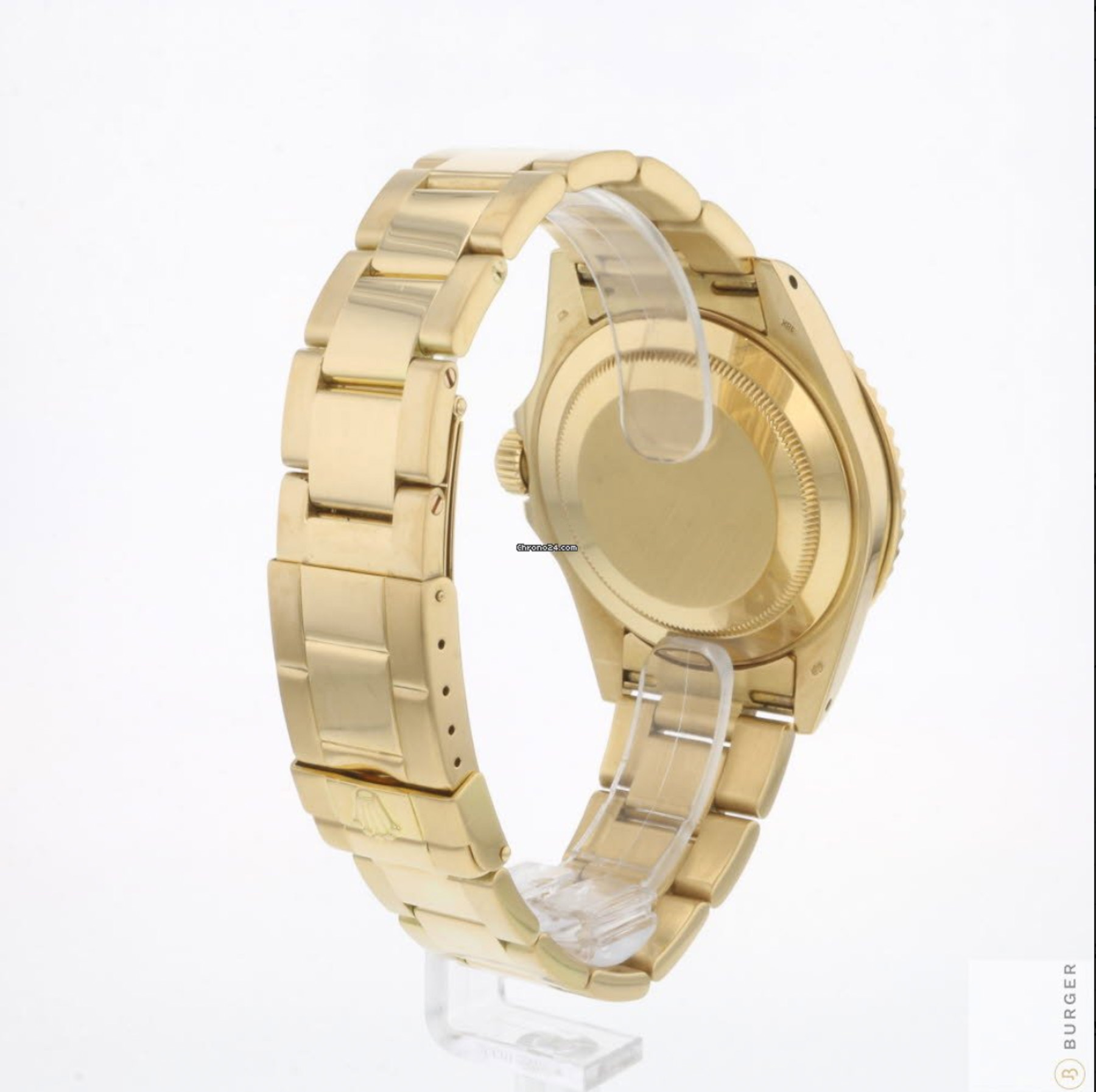 So why feature this watch?

Just because I don’t understand the purpose of the Rolex Yacht-Master doesn’t mean that it’s been a dud for the company. In fact, it turns out that making something that stresses luxury over sporting intent works well! I say this because the Y-M has been a part of the Rolex collection ever since 1992. In fact, it’s now offered in several sizes and metal choices. The current rose gold model even debuted the first rubber band from Rolex. And now, there’s even the Yacht-Master II that actually does help the well-heeled time their sloops.

If I remove my sarcasm-tinted glasses for just a moment, I have to say that the original 16628 Rolex Yacht-Master is kind of interesting. For the first several years, it had this lovely white dial with a little bit of red on it. For a vintage geek like myself, there was tritium and the case had drilled lugs. Inside, Rolex used the same 3135 automatic caiber as on the Sub. The clasp is the shorter Flip-lock seen on other sports models from the Coronet. 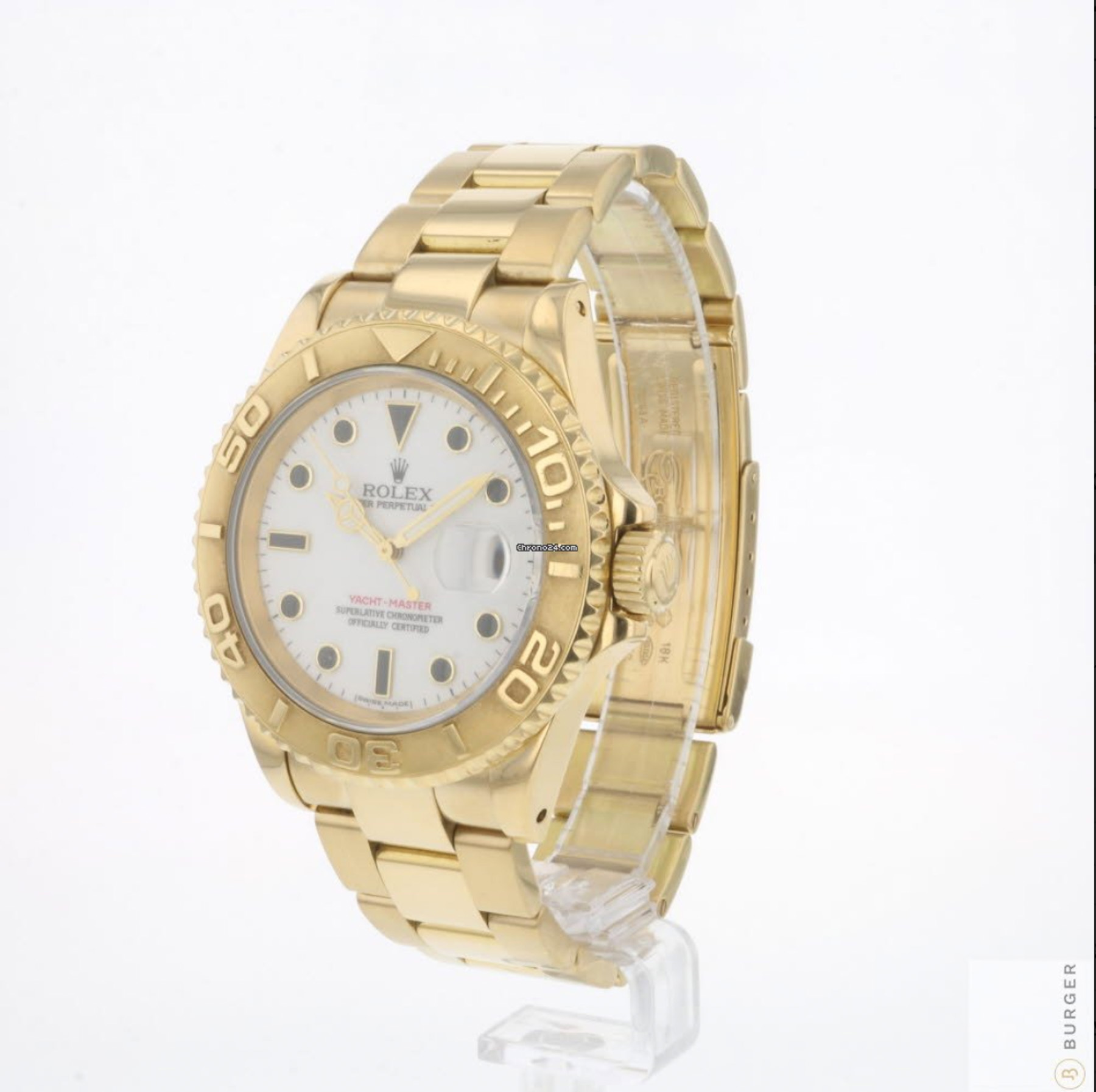 All that being said, I still can’t get away from the fact that this watch looks like the type of thing one would wear with one of those stupid skipper hats at the local yacht club. To add a little proof to this, I was out the other night in the Puglia region of Southern Italy. At a nice restaurant overlooking the Adriatic, a small group sat at the next table. The incredibly tanned patriarch of the family arrived with a far younger companion. He was festooned in some brightly splattered shirt and white slacks. On his wrist? The 16628 Rolex Yacht-Master. Did he pull it off? Maybe in a way that only a vacationing sort can, but it looked mildly ridiculous — and the watch didn’t help. 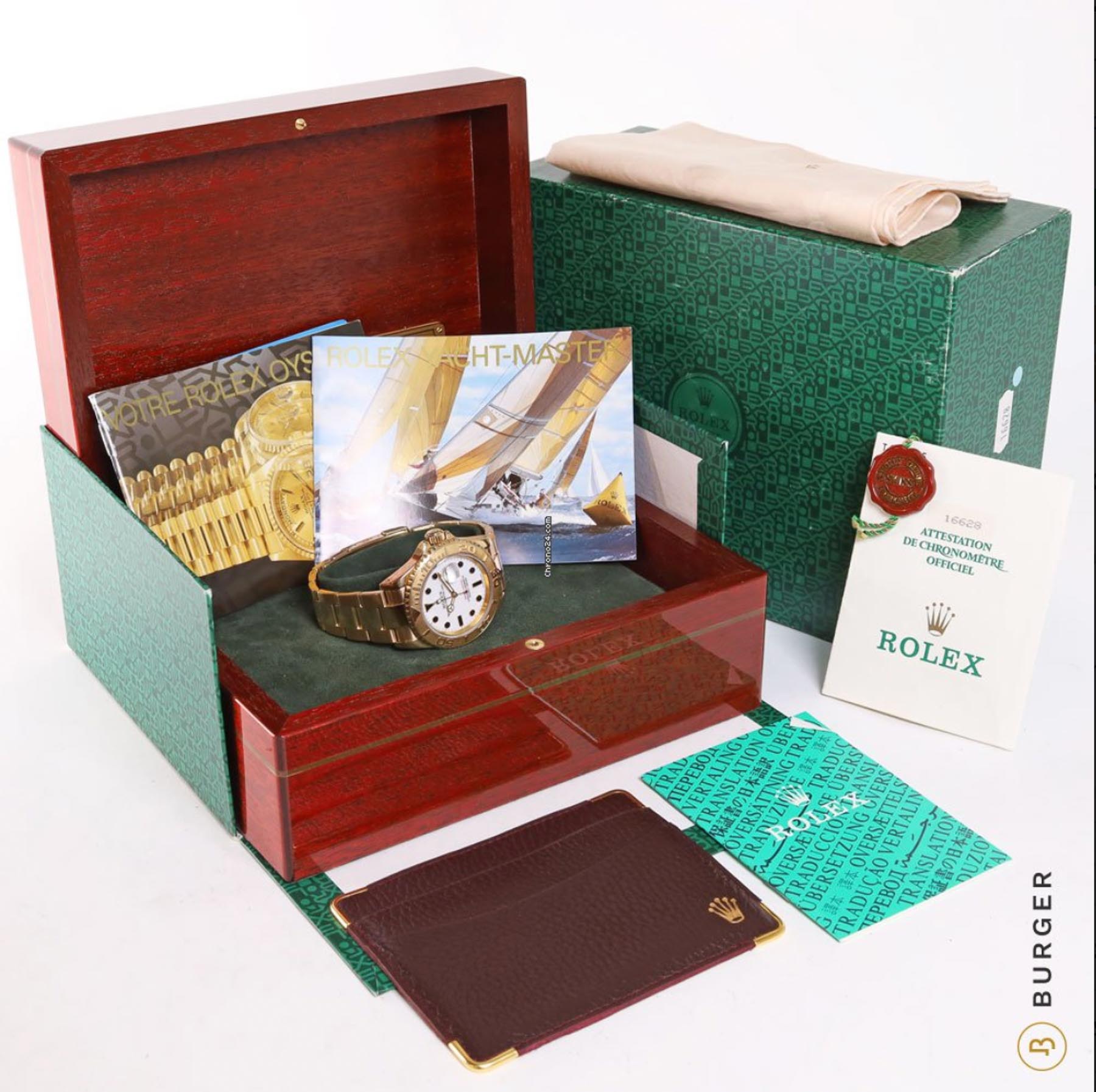 Still, the Rolex Yacht-Master is a mainstay in the collection and I think it deserves a trial here on Wrist Game. I did a bit of hunting on Chrono24 and found what I think is a lovely model at Juwelier Burger in the Netherlands (they own the pictures). Now, I will tell you that you can find examples for €4-5K less than this €18,750 specimen. However, this one has all of its boxes and papers and looks to be in nice shape. And that box? It’s one of those sexy lacquered wood ones that looks like the Rybovich yacht you’ll soon own. So many of these have had some serious polishing, are stretched, or contain later service replacement parts (I would check this dial to ensure it’s not later). At this price, it may be a lot, but contrast that against today’s Yacht-Master. The current rose gold model on rubber comes in at a maelstrom-like €26,510. Shiver me timbers!

Look, I am asking for your vote on this Rolex Yacht-Master, but I am genuinely interested in where you see this watch within the brand’s history. Is a first-generation model like this worth stowing? Is this a classy collectible? Or, is this too gauche and solely deserves invites to the yacht club of bad taste?