One is designed to look vintage, the other to be used aboard nuclear-powered submarines
Daan de Groot
comments 5
Share

About 10 years ago, a very good friend of mine showed me around the submarine that he was working on at the time. He would go on missions without getting any fresh air for weeks, maybe even months. I remember that the whole experience was quite impressive to me. All those tiny and narrow spaces. No daylight coming through anywhere. And now Yema launches two new Navygrafs. One took its design inspiration from the bronze elements on a submarine. The other was co-designed with the French Navy troops that are actually supposed to use it while working on a submarine. Let’s take a closer look at the Yema Navygraf FSM.

Last year, Yema marked the start of its official partnership with the French Navy (Marine Nationale) launching no fewer than four versions of the Navygraf. Three of those are still available on the brand’s site. But the one to get, the limited-edition GMT version, is unfortunately sold out. This year, Yema is back with two new non-limited versions of the Navygraf. This time, they commemorate the 50th anniversary of the Strategic Oceanic Force, which the Submarine Forces (Forces Sous-Marine, or FSM for short) are a part of. They actually have four ballistic-missile nuclear submarines, and six nuclear-attack submarines at their disposal. I’m glad I won’t have to explain anything about those. Let’s stick to the watches! 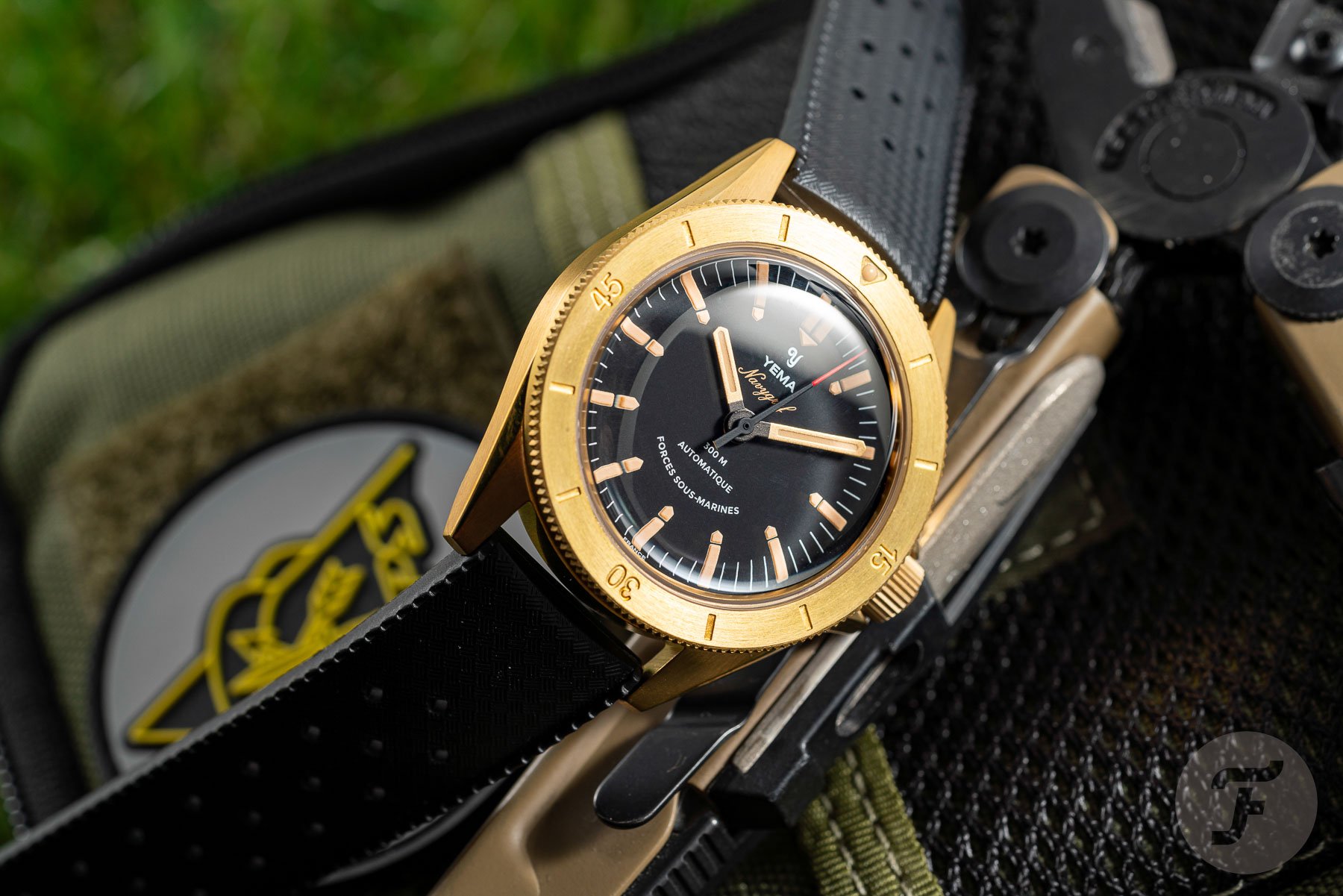 I’ll start with the bronze version. This is the more elegant and more vintage-looking watch of the two, especially due to the combination of the mostly brushed case and bezel with polished chamfers on the lugs. The people at Yema say that they used bronze for the 38.5mm case because they were inspired by important mechanical elements on an actual submarine. For example, the flush blocks, which are used to rise to the surface, are made of bronze. And to take it even further, that matte black dial is derivative of a submarine’s black hull. 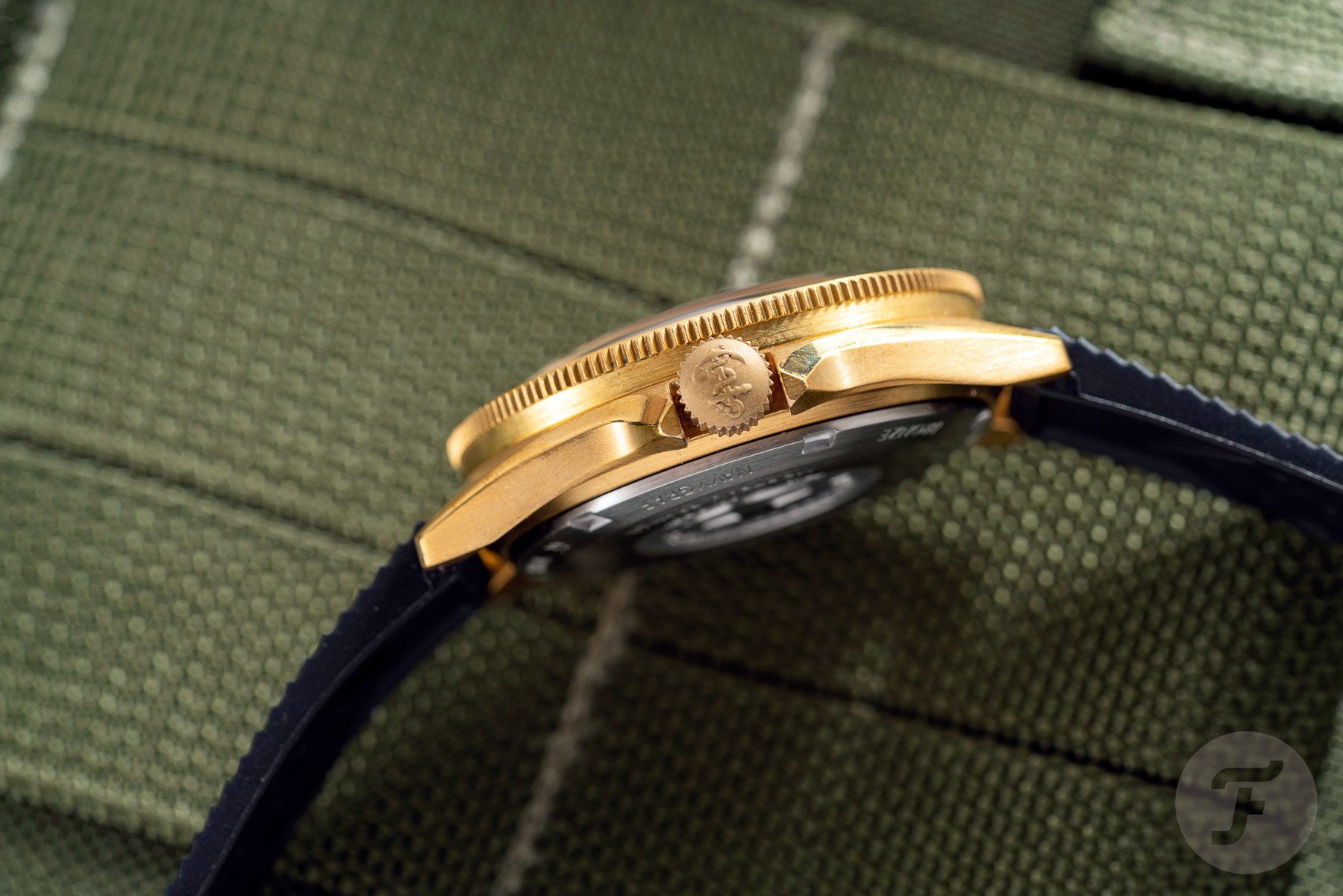 On that black dial, the designers used a gilt tone for the hands, printed indices, and that sexy Navygraf print. Along with the bronze case, the gilt accents look superb, so I can see why they chose to go for that look here. And to accentuate the vintage aesthetics of the watch, they also chose to fit it with a double-domed sapphire crystal, measuring about 3mm thick. This brings the total thickness of the Navygraf FSM Bronze to 14.1mm. Though it’s not the thinnest watch, due to the slim mid-case and 46mm lug-to-lug, it still wears well and looks great on the wrist. And just because both of these watches are named Navygraf doesn’t mean they have exactly the same measurements. 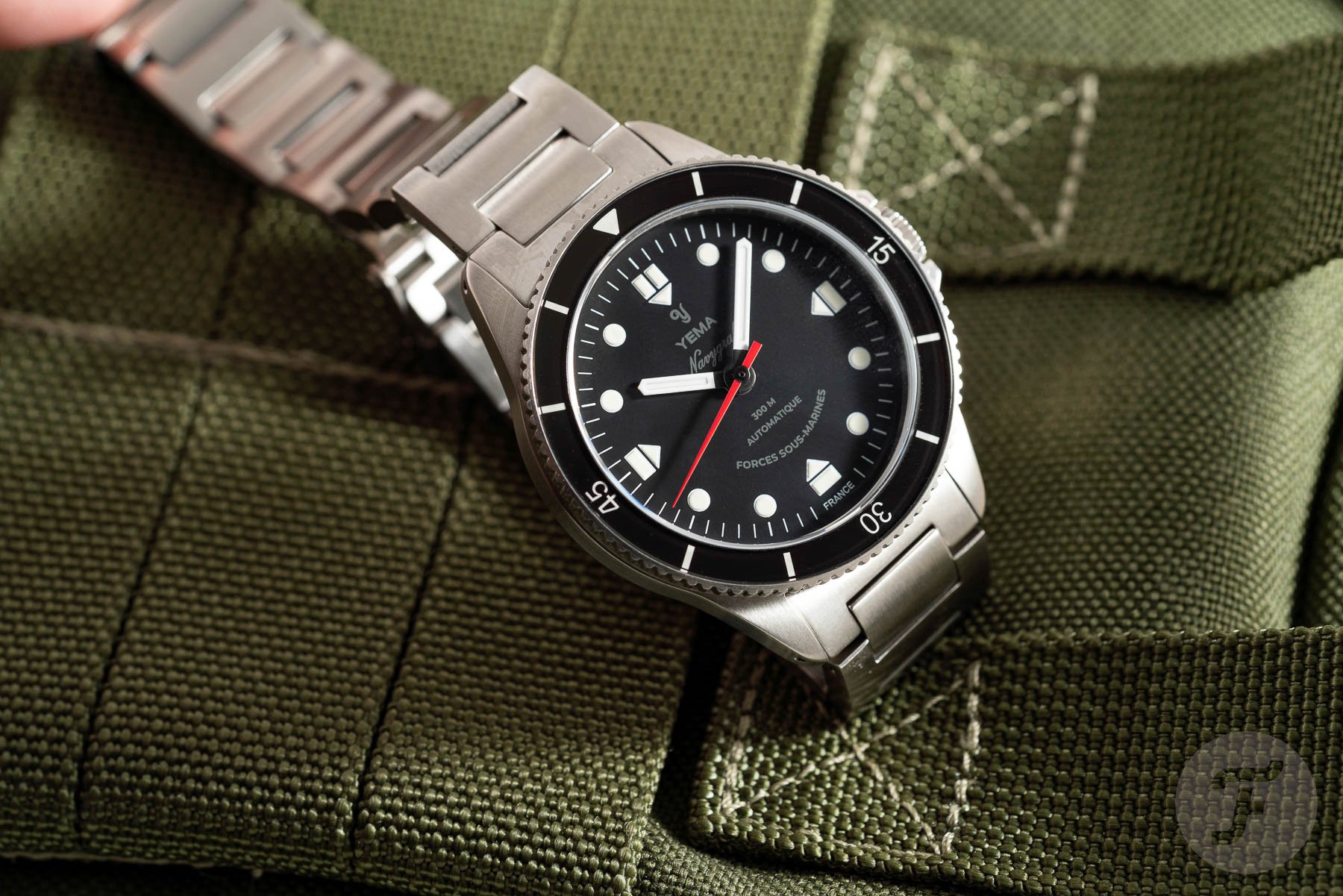 The steel version of the Navygraf FSM is actually 2mm thinner than its bronze brother, coming in at 12.15mm thick. That’s because it uses a flat sapphire crystal instead of a domed one. On the other hand, the lug-to-lug and diameter are both slightly increased to 47mm and 39mm respectively. I know, these differences are hardly noticeable on the wrist. Still, I found it interesting as you’d expect both watches to have exactly the same case size, but they don’t. The polished chamfers are also absent from the steel Navygraf FSM. 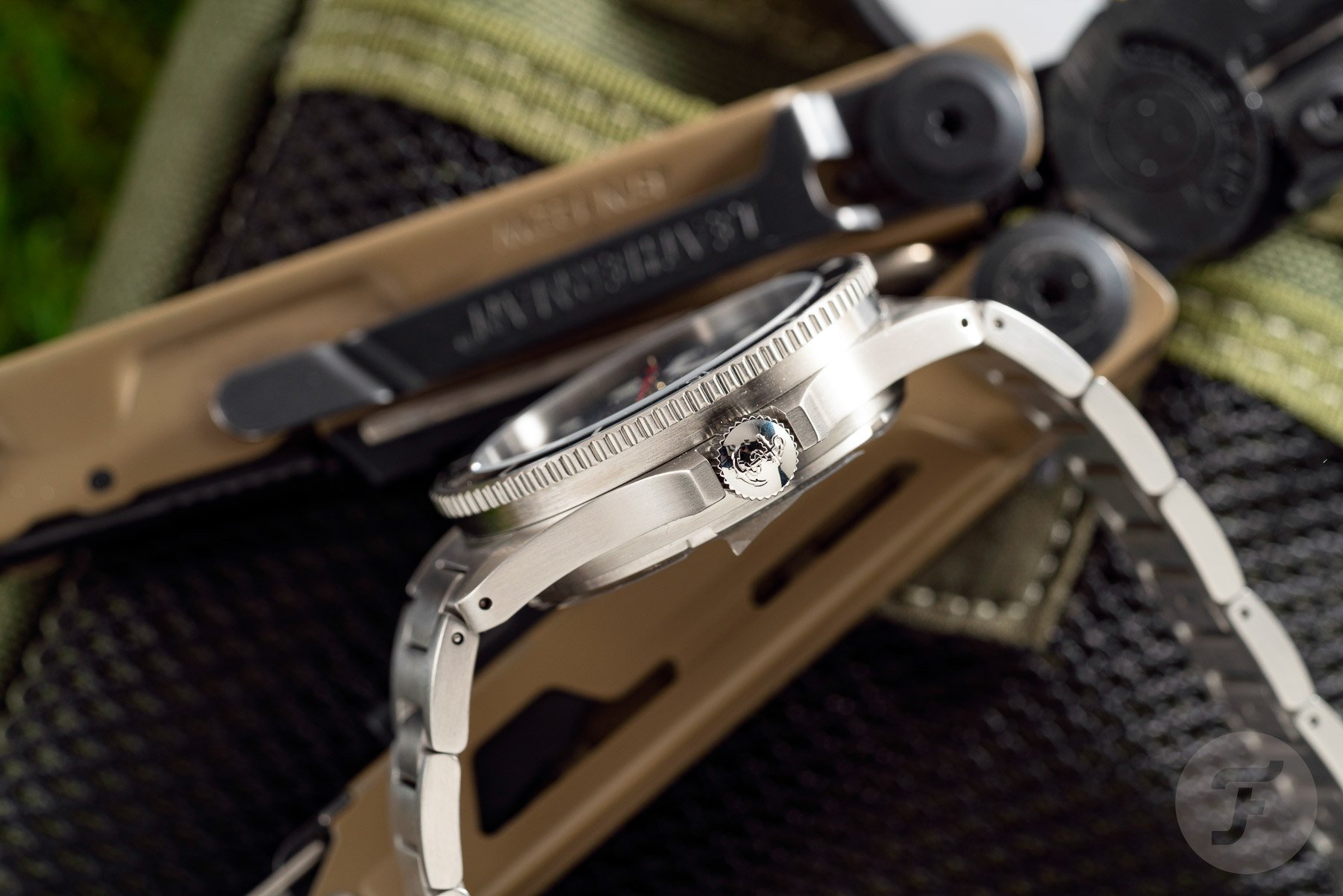 What is still there, however, is the matte black dial. But that’s about all, though, because the rest of the dial layout looks more like this Navygraf II from the ’70s than that of the bronze FSM. The hands have the same pencil shape, but this time, they’re snowy white to match the indices. The rest of the text on the dial has been darkened to blend in with the background. Apparently, this was a request from French Navy personnel to contribute to the legibility of the dial. The bezel has a black sapphire inlay, and all of the numbers and indices are lumed. All in all, I think the all-brushed steel version looks more modern than the bronze one. Moreover, it seems to be specifically designed to be a purposeful tool for the staff on the submarines. 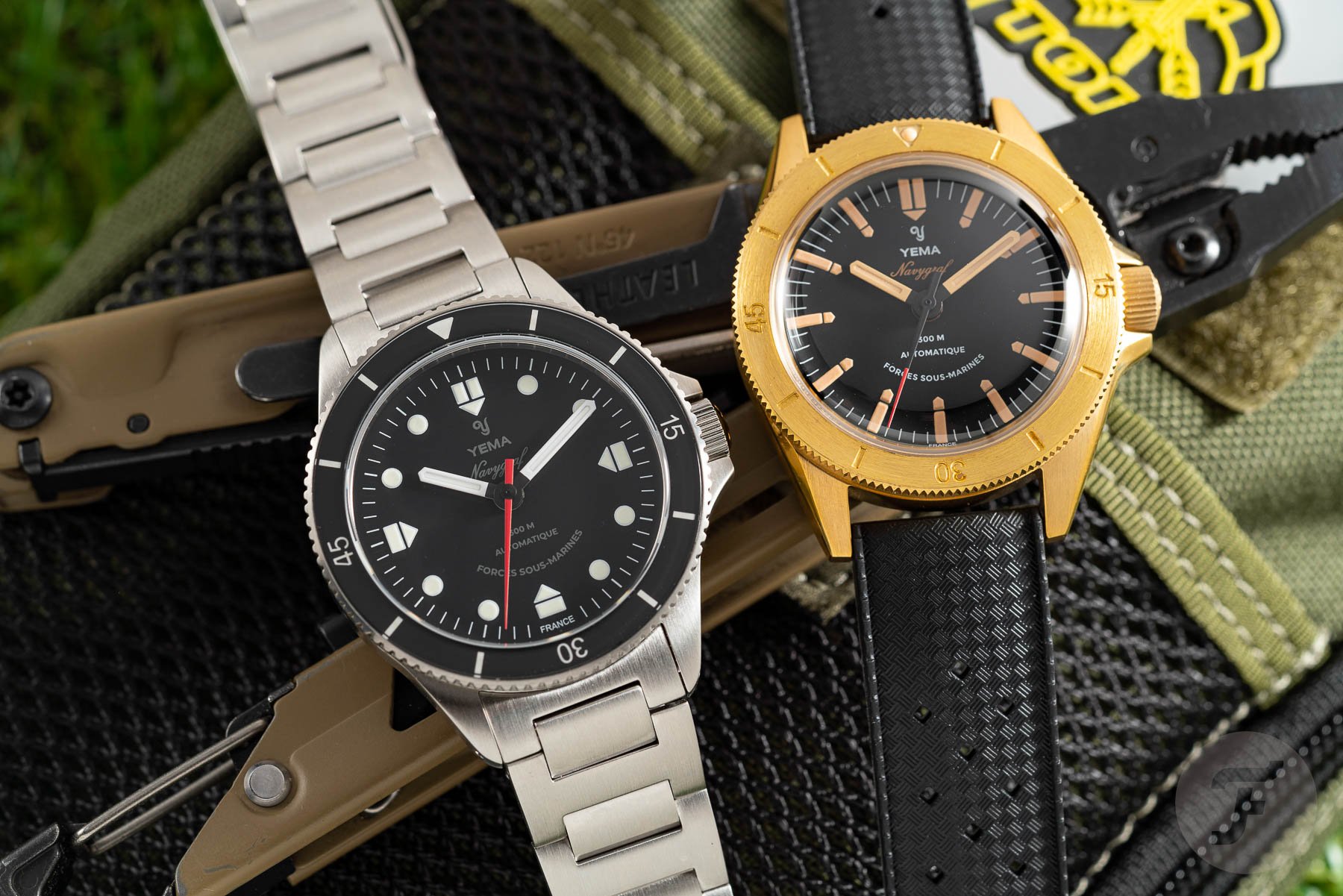 Inside both of the Navygraf FSM models sits Yema’s own YEMA2000 movement. It has an advertised accuracy of ±10 seconds per day and a power reserve of around 42 hours. Yema also uses this movement in watches with a date. However, as neither of these watches features one, Yema’s watchmakers made sure to remove the crown’s ghost position. Both watches are water resistant to 300 meters. That is fantastic, but I guess you won’t really need it if you’re inside a submarine.

Both versions of the Navygraf FSM feature the Marine Nationale anchor on the crown and the very cool-looking Submarine Forces (FSM) logo on the case back. The bronze one is available on a black tropic strap or a black/gold MN strap for €1,190. I know which one I’d choose. The steel version is available on an H-link bracelet for €849. Alternatively, you can get it on the same black tropic or a black leather strap for €790. Both versions of the Yema Navygraf FSM are now available for preorder and will be shipped sometime at the end of October. For more information, check the official Yema website.

Let me know in the comments which one of the two Navygrafs you prefer and why!