If you’re anything like me, your first knowledge of Zenith watches came through a discovery of the legendary El Primero. No doubt, the world’s first high-beat automatic chronograph has been the brand’s cornerstone since 1969. But what was the manufacture from Le Locle doing in the decades before the El Primero changed the chronograph game forever? Oh, ya know, just making some of the most precise chronometer wristwatch movements that the world had ever seen! Today, Zenith celebrates its most awarded chronometer with the release of the Calibre 135 Observatoire Limited Edition. This 10-piece collaboration with Phillips and Kari Voutilainen harks back to Zenith’s fascinating history beyond its biggest icon.

Long before the watch industry went auto-chrono crazy, competitions in chronometry were all the rage. Held yearly at observatories in Switzerland and beyond, these contests gave watch manufacturers the ultimate chance to prove their mettle. Having dedicated itself to precision since 1865, Zenith most certainly wanted in on the action. In 1945, watchmaker Ephrem Jobin began the development of Zenith’s chronometric champion-to-be. Four years later, the resulting Calibre 135-O hit the scene. For five consecutive years between 1950 and ’54, examples of this movement claimed the top prizes at the Neuchâtel Observatory. No other brand had won the contest five years in a row, and in doing so, Zenith proved it was a force to be reckoned with. Now, the brand collaborates with Phillips and Kari Voutilainen, giving 10 of these prize-winning movements a new lease on life. 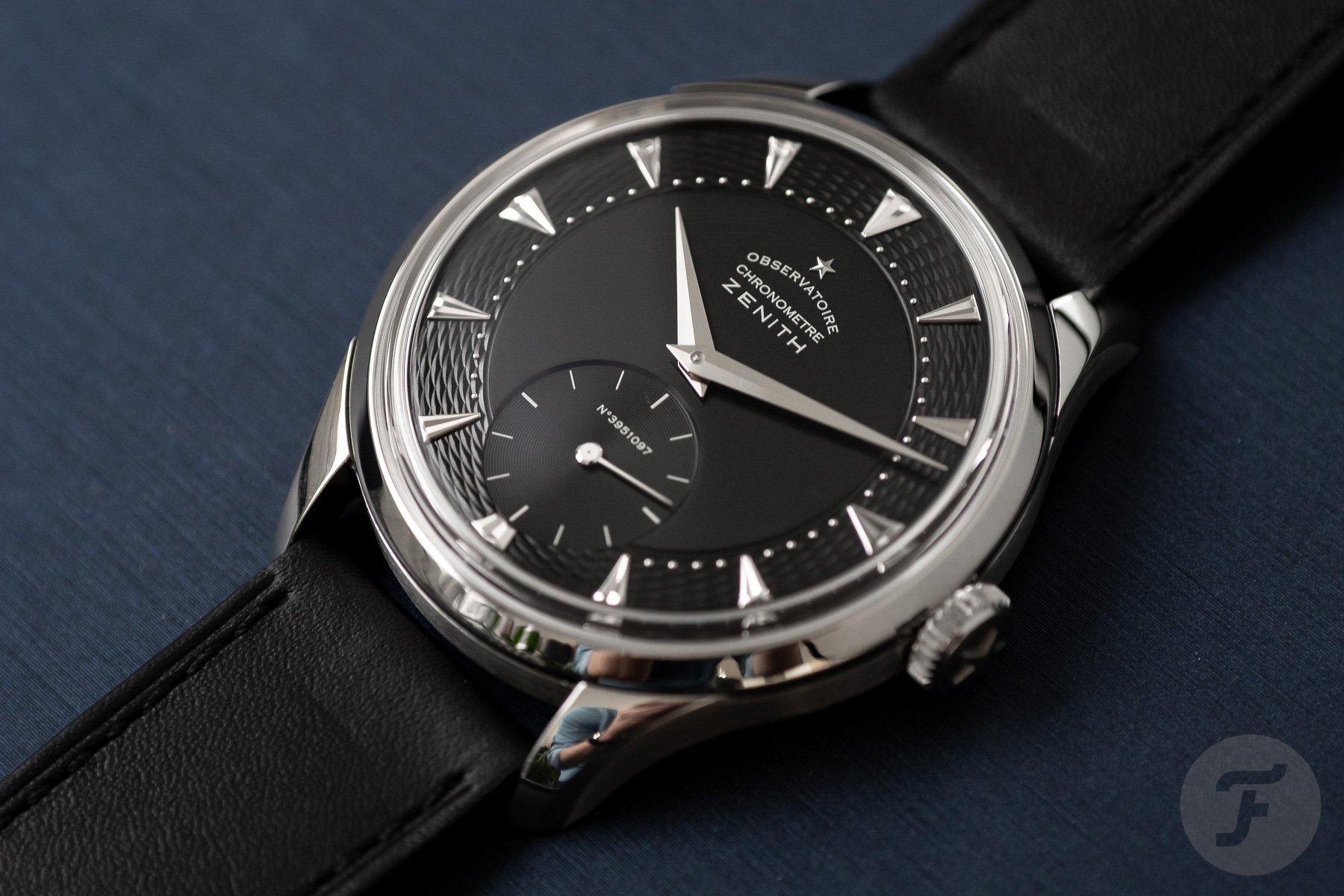 Bringing Calibre 135-O back to life

Calibre 135-O would go on to claim over 230 awards in chronometry throughout its 13-year run. Even now, to collectors well-versed in vintage watches, the movement remains a heavyweight of historical watchmaking. Nevertheless, for many enthusiasts these days, this chronometer isn’t as famous as Zenith’s later icons. Aurel Bacs and Alexandre Ghotbi of Phillips, however, had a desire to see a revival of this vintage chronometric gem. Having collaborated with Zenith on special editions in the past, the duo shared their wish with the Le Locle watchmaker. To their surprise, Romain Marietta, Head of Product & Heritage at Zenith, offered up quite an enthralling proposal — a limited series housing observatory-tested, contest-winning movements from the brand’s championship streak. The idea exceeded even Bacs and Ghotbi’s expectations.

You see, Calibre 135 actually existed in two separate versions. Zenith produced a commercial variant to power several of its watches, such as the Chronomètre, Port Royal, and Zenith 2000 models. The Observatoire version, however — Calibre 135-O — was made strictly for the contests and never to be worn. As such, Zenith put less emphasis on its aesthetic decoration and focused more on refined components for better precision. Having a chance to use the actual award-winning calibers was a very exciting opportunity indeed. But to make them suitable for an exclusive edition, the movements would need the spa treatment from the industry’s best. Bacs and Ghotbi thus requested the help of Kari Voutilainen to bring these 10 special calibers up to the highest modern standards. 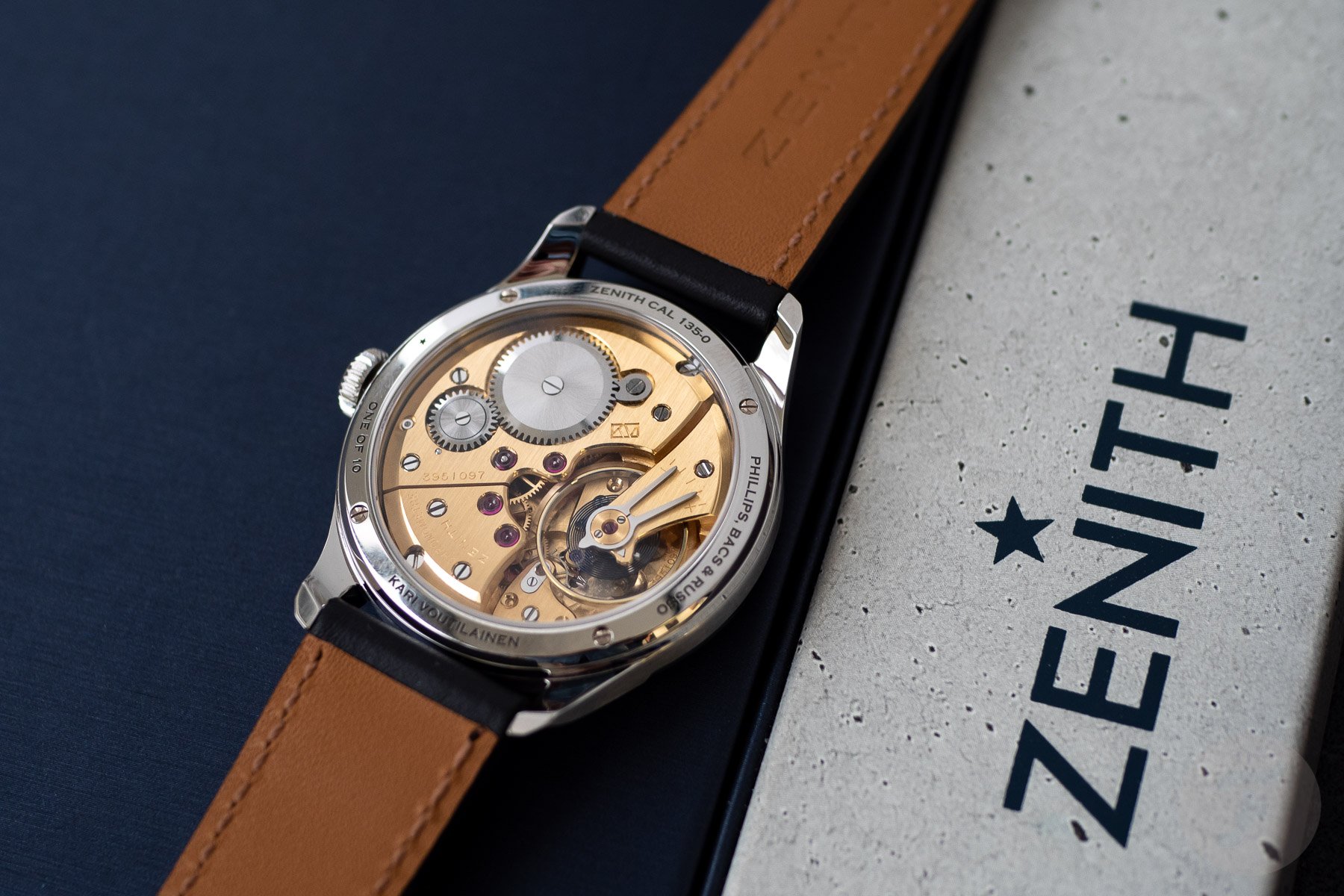 Voutilainen and his team of watchmaking wizards completely overhauled the movements and refinished them by hand. All of the gold-plated bridges feature sharp, polished chamfers, a detail that carries through to even the heads of the screws. The crown and ratchet wheels have received a tasteful snailed treatment, while the mainplate now dons an alluring coat of perlage. The massive balance assembly is a joy to behold with its bi-metallic split balance wheel and adjustable inertia screws. And with a period-correct frequency of 18,000vph, ogling every oscillation will amplify the vintage charm. The power reserve of 40 hours is also period-appropriate and even passable today (depending on who you ask). I find a childlike amount of joy in the double-pronged regulator, though. I just think it looks so cool compared to more common single-pronged types. 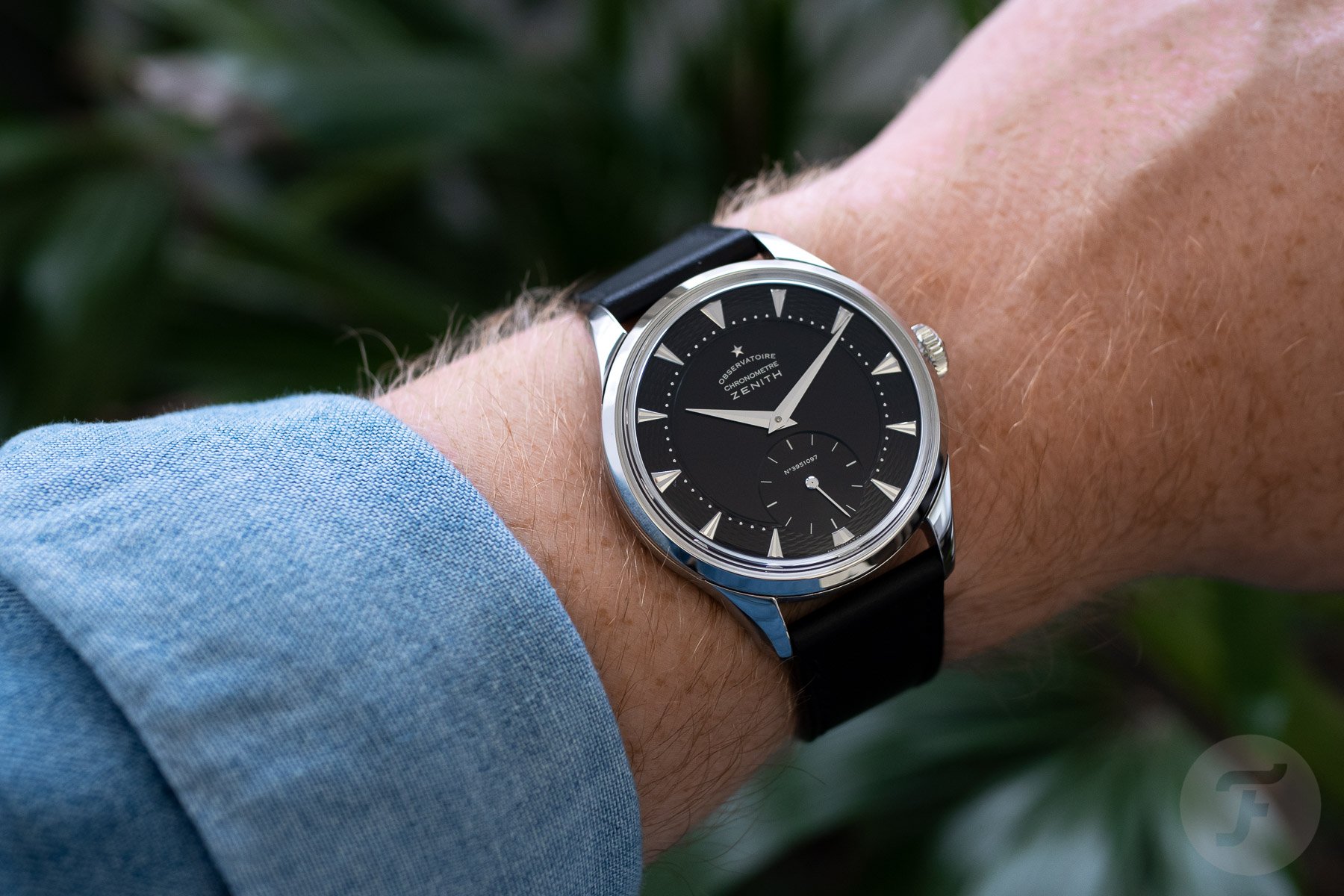 Most pleasing in platinum

But I’m sure you’d like to know about something other than the movement, so let’s move on to the rest of the watch. The design is inspired by vintage Zenith models that carried the standard version of the Calibre 135. The execution, however, is luxurious as you’d expect with a 38mm case in 950 platinum. The bezel is mirror-polished, and I absolutely adore how it nestles right down into the tops of the lugs. The polished lug hoods show a nice, crisp bevel before transitioning into beautiful, horizontally brushed sides. A black calfskin strap with a white gold pin buckle is a classy modern choice for a toned-down look.

The dial, however, is an utter work of art, and it hails from Voutilainen’s Comblémine workshop. The sterling silver base gets an all-black treatment, a matte finish at its center, and a radially textured sub-dial. Within that small-seconds register, you’ll find the individual movement number as recorded at the Neuchâtel Observatory trials. 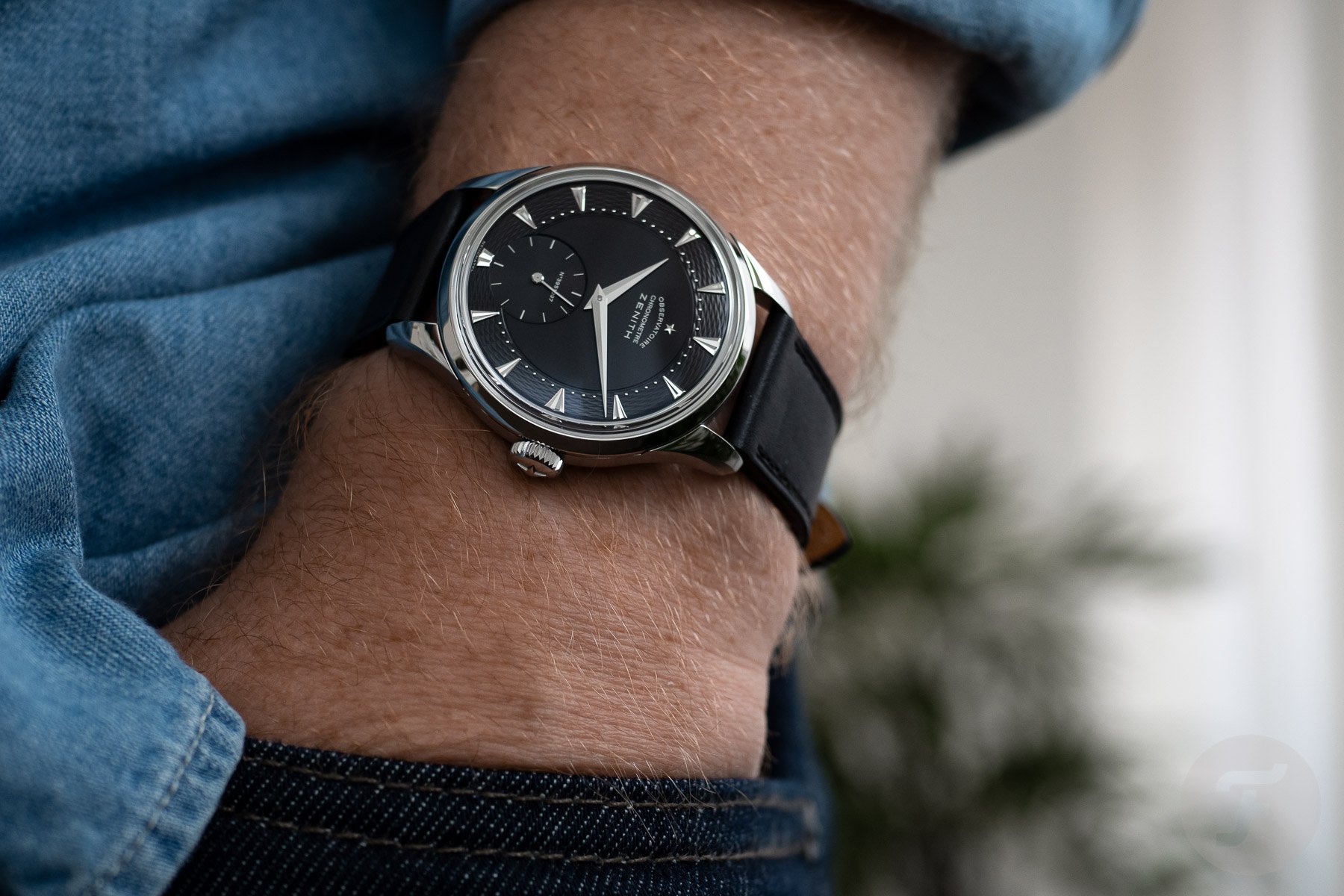 But if you ask me, the perimeter of the dial is where it’s at, as it features a gorgeous fish-scale guilloché pattern. This Comblémine signature is one that we’ve seen on its dials for Grönefeld and Schwarz Etienne as well. Applied on top of it are German Silver indices, with dots for the minutes and arrowheads for the hours. The hour markers are rhodium-plated and faceted on all sides, pairing nicely with the white gold dauphine hands. Under the applied Zenith star, you’ll find “Observatoire Chronometre”, a proud declaration of the watch’s heritage. Finally, at 6 o’clock, you’ll find the “Neuchâtel” signature, the canton where Zenith, Voutilainen, and the observatory are based. 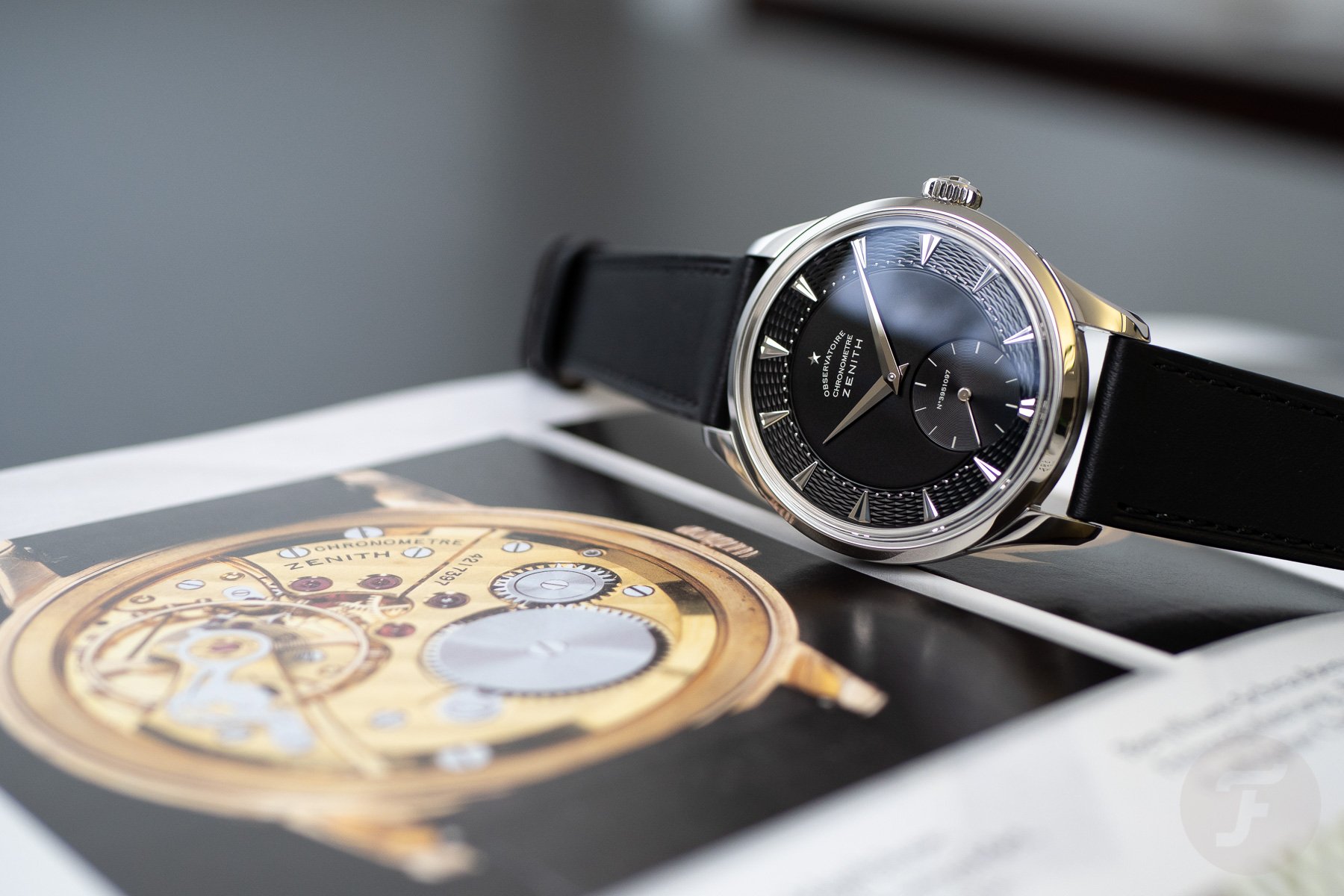 The Zenith Calibre 135 Observatoire Limited Edition carries a price of CHF 132,900. As this is a collaboration with Phillips In Association With Bacs & Russo, these 10 pieces will be available through Phillips directly. With a super-limited run and a hefty price tag, only a few lucky people will be able to snag one. But if you’d like to try your luck, stop what you’re doing and head over to the Phillips website immediately.

And to all the rest of the Fratelli with more down-to-earth budgets, did you learn anything new about Zenith today? If so, let me know in the comments below!