Introducing The A. Lange & Söhne Odysseus In Titanium — The Brand’s First Titanium Timepiece

Whenever A. Lange & Söhne announces new timepieces, I immediately shift towards the edge of my seat. That also happened when the brand announced its venture into luxury sports watches with the Odysseus back in 2019. It was a release that did not go unnoticed. Watch fans worldwide expected a watch that would aim to compete with the Pateks and APs of the world. Instead, A. Lange & Söhne chose its own path with an extremely unique, characteristic design. Three years after the release of the stainless steel Odysseus, the brand releases the new titanium version. This is not only the most sporty Odysseus to date, but it’s also the first time we’ve ever seen a titanium A. Lange & Söhne watch. Time to find out more!

I still remember the stream of mixed reactions when A. Lange & Söhne announced the release of the Odysseus in 2019. Many watch enthusiasts expected the brand to create a watch that would go head-to-head with the iconic Genta creations. Instead, the brand released a watch that is, first and foremost, very much an A. Lange & Söhne creation. Inspired by the characteristic style the brand is known for, the Odysseus was far from an attempt to lure people who could not get their hands on a Nautilus or a Royal Oak to the brand. It was a watch in a recognizable style specifically for the brand’s fans. 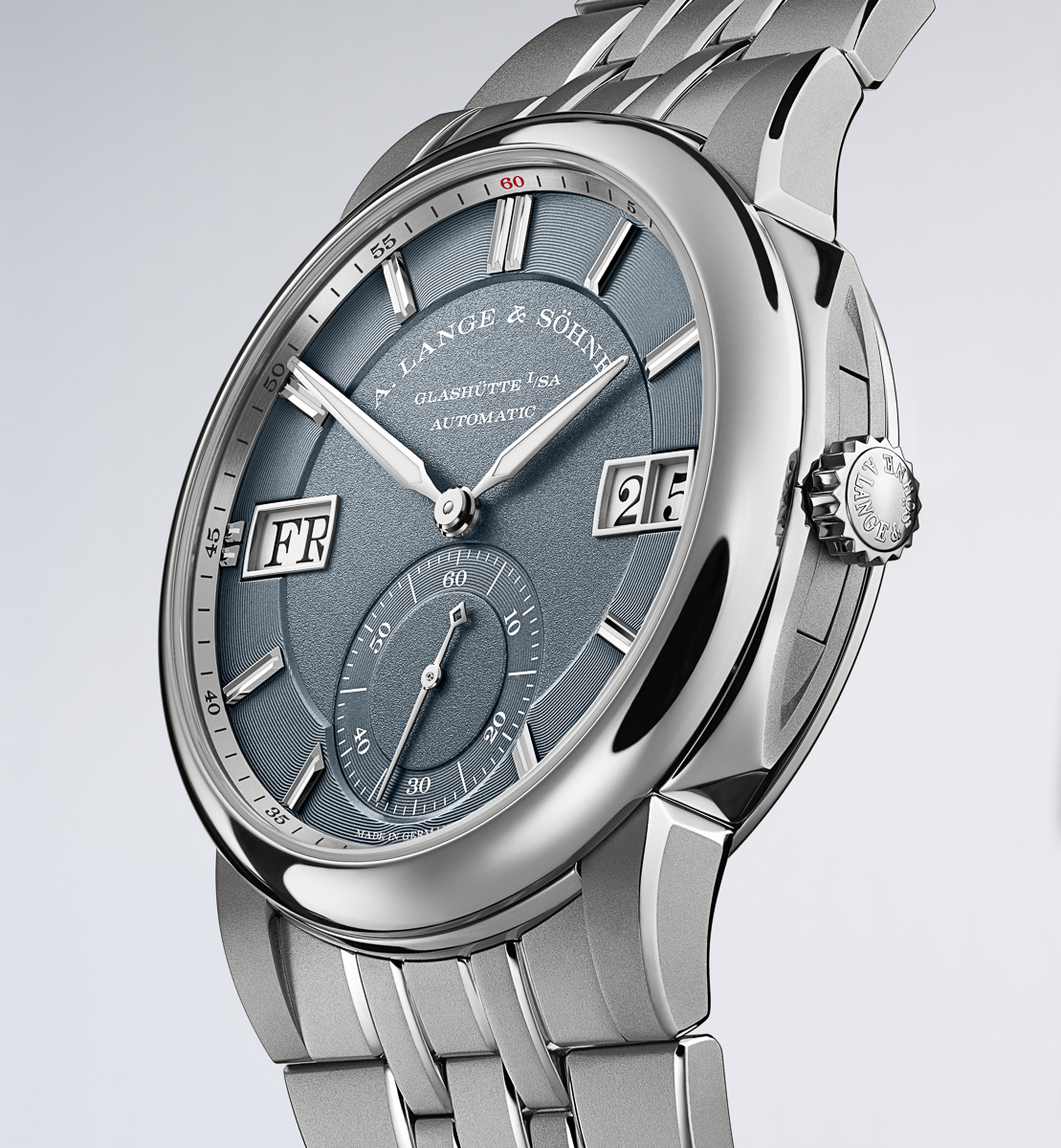 For the Odysseus, A. Lange & Söhne chose to honor the brand’s characteristic style, while creating a luxury sports watch that runs in the same vein. It’s a less formal watch and intended as a sporty offering from the Glashütte brand. Many fans had to get used to the Odysseus. I was definitely one of them. As some of you know, I love Genta’s legacy. As a result, I look at every new introduction in the world of luxury sports watches with a critical eye. But the Odysseus turned out to be something completely different than expected. 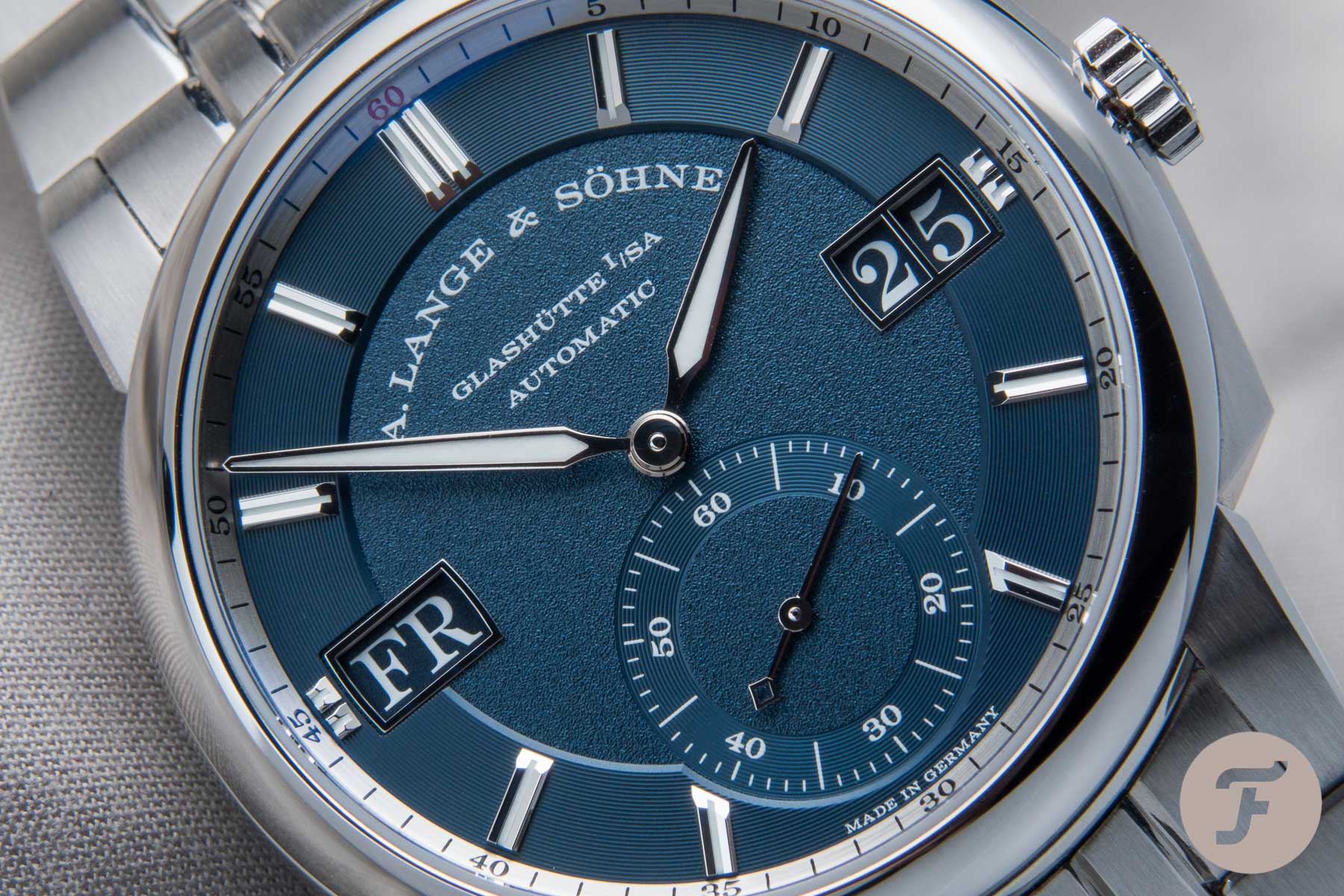 Along with its unique looks, the Odysseus also introduced a regular stainless steel model to the Lange collection. As Bert explained in his review of the stainless steel Odysseus, A. Lange & Söhne doesn’t release a stainless steel watch every day! The brand executes the vast majority of its timepieces in precious metals and with often glorious results. It’s the same route the brand went down with the Odysseus a year after the release of the stainless steel model. The white gold Odysseus was part of our Sunday Morning Showdown series, where you all showed a lot of love for the watch. Now, we see the introduction of the third Odysseus model, and it’s another special release. The new Odysseus is the first A. Lange & Söhne watch executed in titanium. 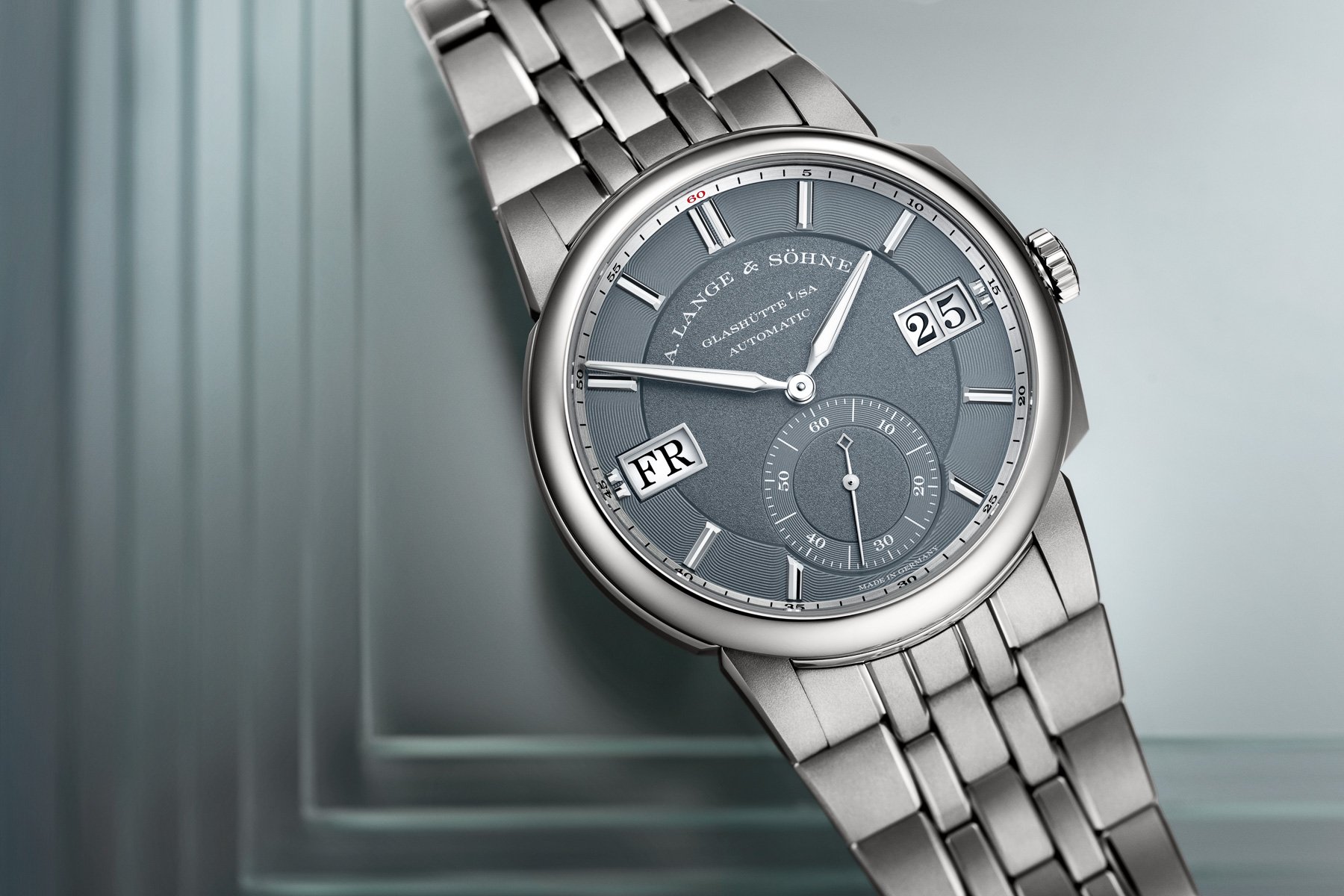 The A. Lange & Söhne Odysseus Titanium

At first glance, the new Odysseus looks very much like the models that came before it. This new version features the same 40.5mm case with a height of 11.1mm, only this time, it has an all-titanium construction. The round case is characterized by its protrusive “crown platform” down the righthand side of the case, as Rob explained it. I like this twist to the design to give it more character. Placed above and below the crown are two small pushers that allow easy changes of the large day and date display.

The watch comes with a matching titanium bracelet executed in the same design as the stainless steel bracelet. Thanks to the use of titanium, the overall weight is reduced by 43 percent compared to the stainless steel version. The result is a timepiece that is very easy to wear in size and weight. In addition to the low weight, the watch is water-resistant to 120 meters, making sure it fits any luxury water activity you might have planned in the summer months. 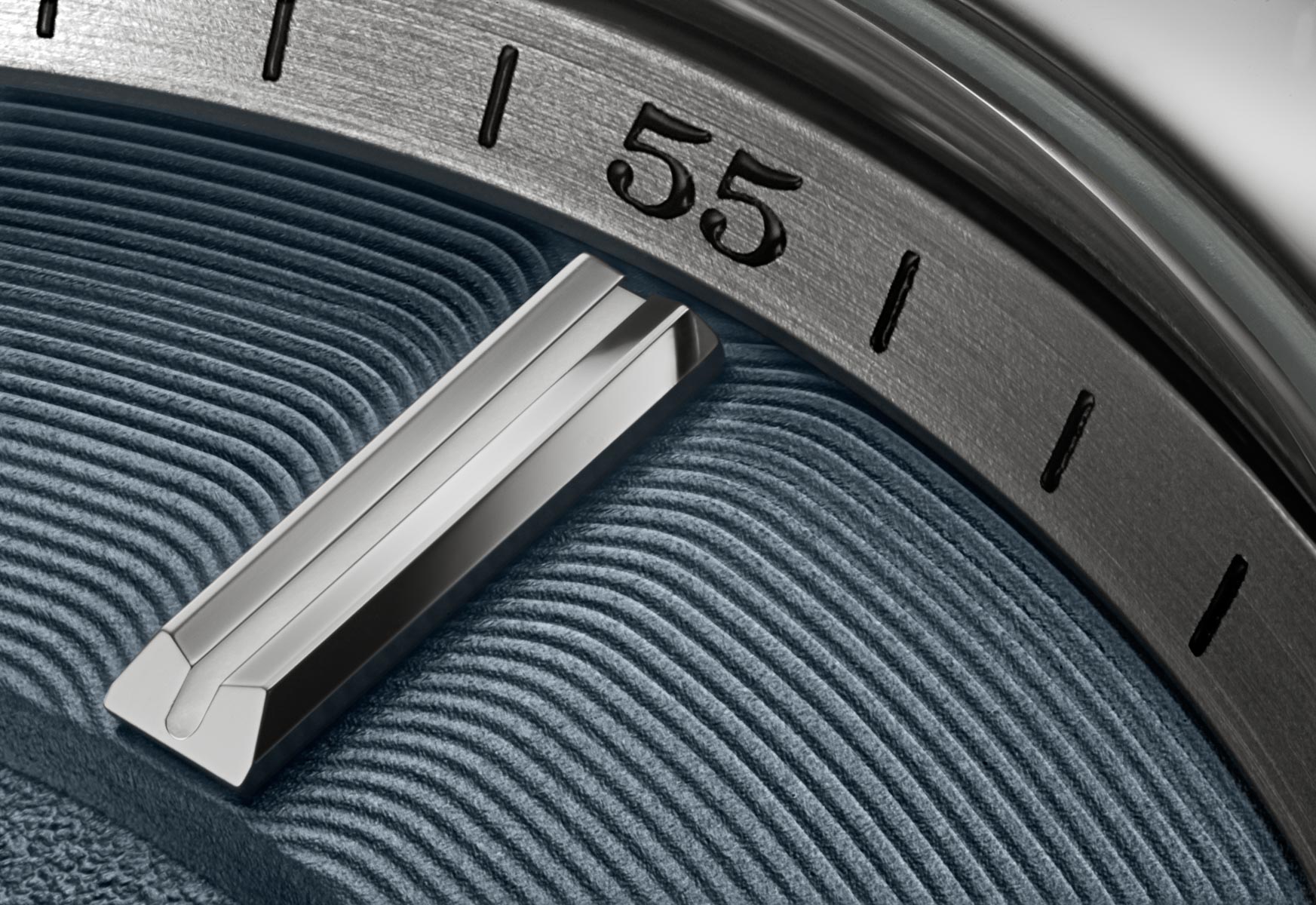 For the new titanium version, A. Lange & Söhne chose to create a beautiful ice-blue dial made of brass. Like the other Odysseus models, the multi-part dial is characterized by the outsize day and date display. Additionally, the different finishes give it great depth. The center of the main dial has a grained structure nicely contrasted by the fine guilloché grooves on the hour ring. The grooves gently extend down just below the hour markers. As a result of this visual trickery, it looks like the hour markers are embedded in the dial.

We can see the same design in the subsidiary seconds dial, resulting in a dial full of nice intricacies that are finished to perfection. The big applied hour markers and Lange’s typical lance-shaped hands are executed in white gold and are filled with white lume. You will find the flange ring with the minute scale on the periphery of the dial. The Arabic numerals for every five minutes are printed in black, with only the 60 printed in red as a stand-out hint of color. Overall, the dial combines larger characteristic elements with small intricacies that make it a joy to behold. 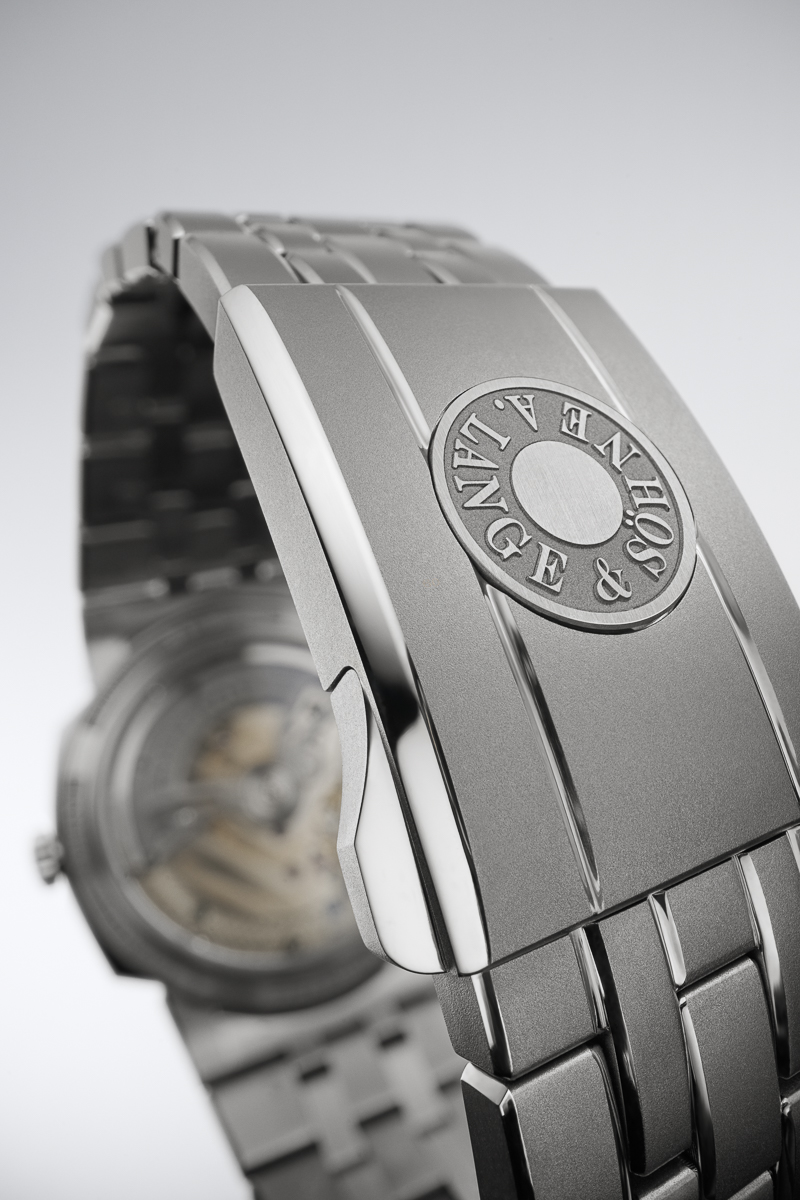 In line with the titanium case, A. Lange & Söhne created a titanium bracelet. It’s the same bracelet design that we know from the stainless steel model, and it’s a true work of art. The integrated bracelet design starts very wide at the case and tapers down to the safety deployant buckle with its micro-adjustment system. It allows you to extend the bracelet up to 7mm by operating the hidden pusher that is the A. Lange & Söhne logo on the clasp. It is very easy to use and allows you to make sure the watch sits perfectly on your wrist. 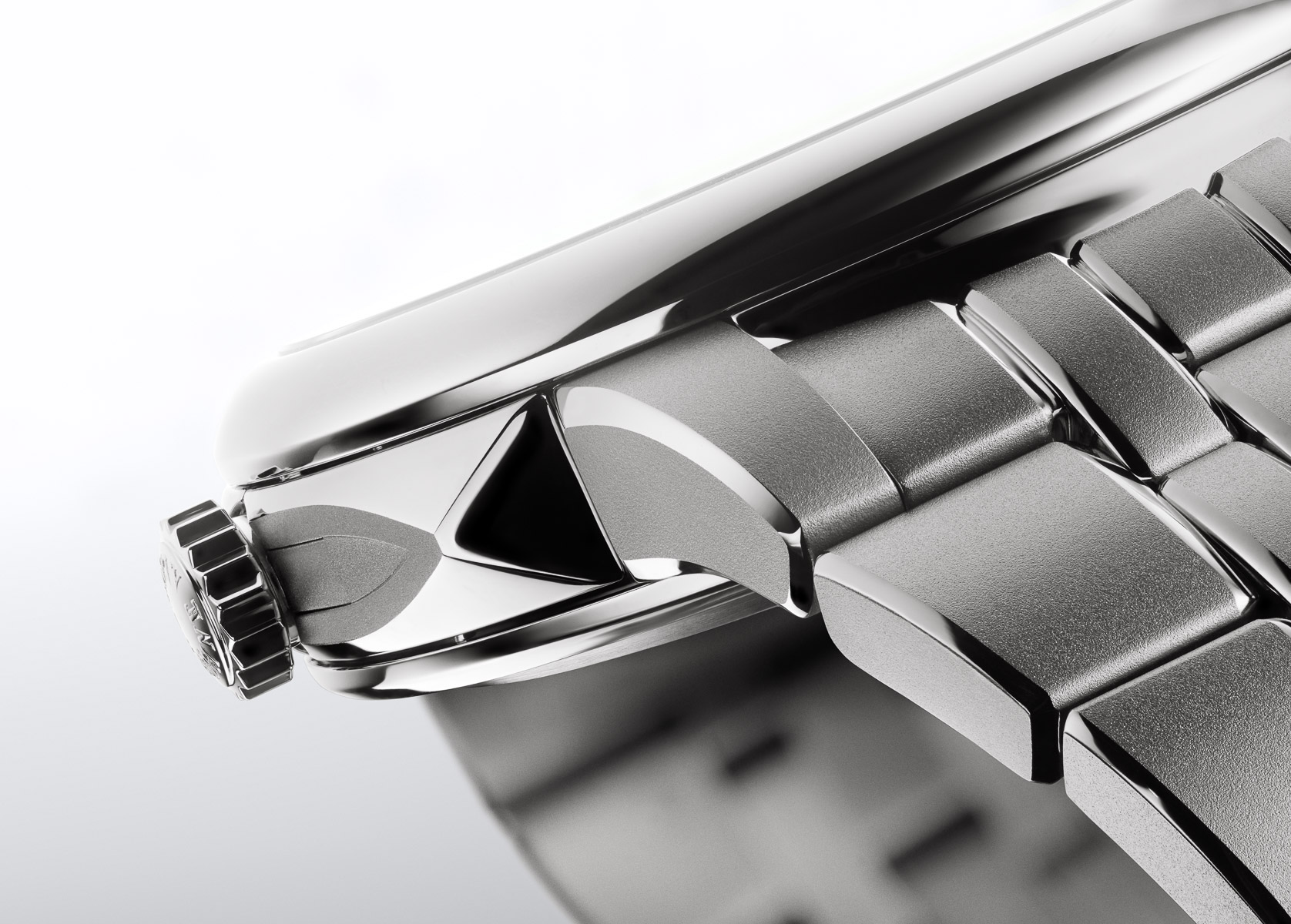 The execution of the bracelet is brilliant, as we would expect from Lange. The contrast of the brushed links with the polished bevels is beautiful. The darker titanium color ensures that the contrast of brushed and polished surfaces is even greater, leading to even more impressive results in finishing. The bracelet is constructed without using screws. As Bert explained in his review of the steel model, the watch is delivered with a special tool to size the bracelet. Using the tool to press the small circles on the inside of the links allows you to shorten and lengthen the bracelet quite easily. 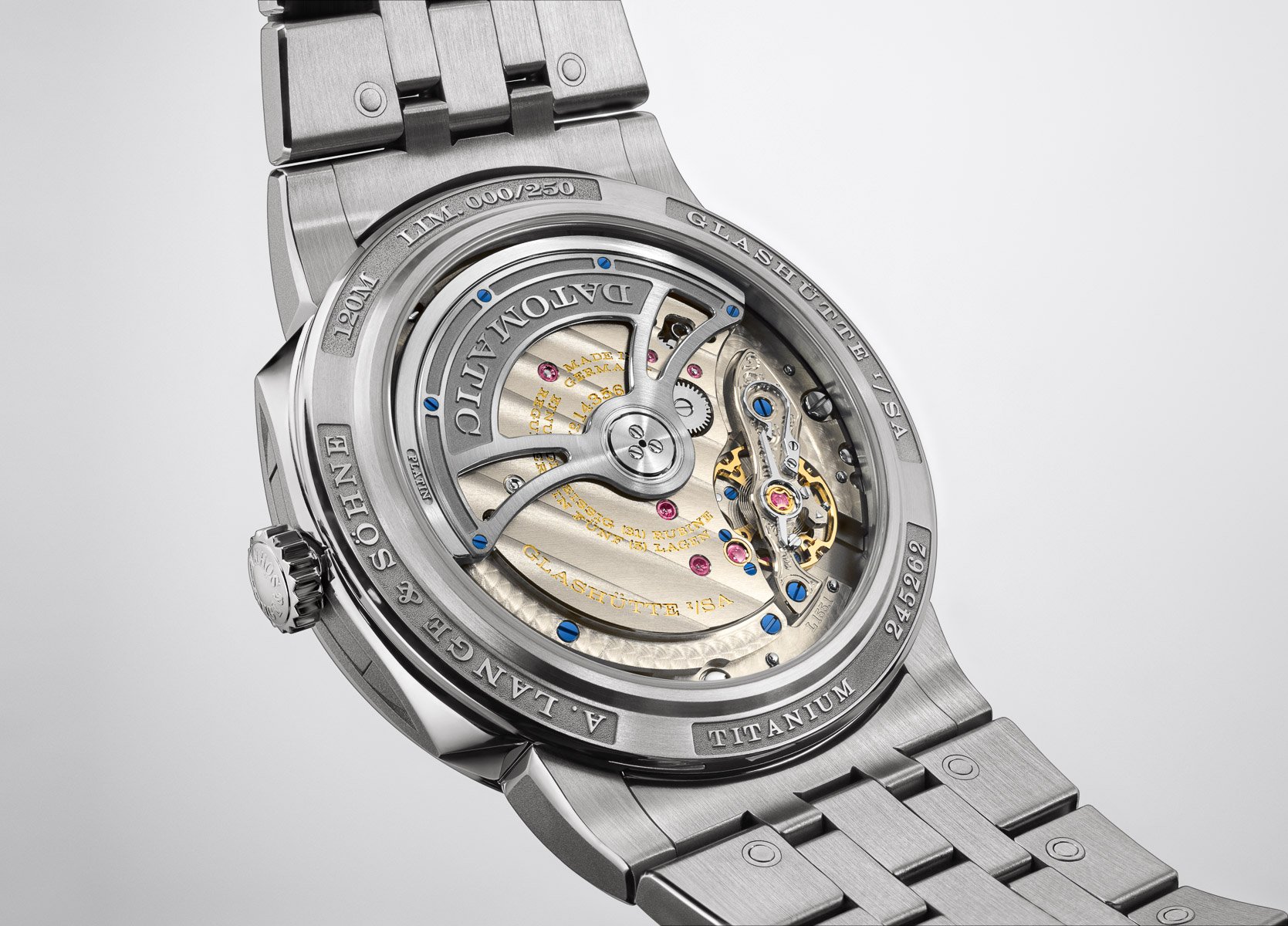 If you turn the watch around, you are greeted by the brand’s in-house Caliber L155.1 Datomatic. The automatic movement is visible through the sapphire display case back and was developed especially for the Odysseus. The caliber is the same as the one used for the stainless steel and white gold versions. The movement consists of 312 components, operates at 28,800vph, and has 31 jewels with a 50-hour power reserve. 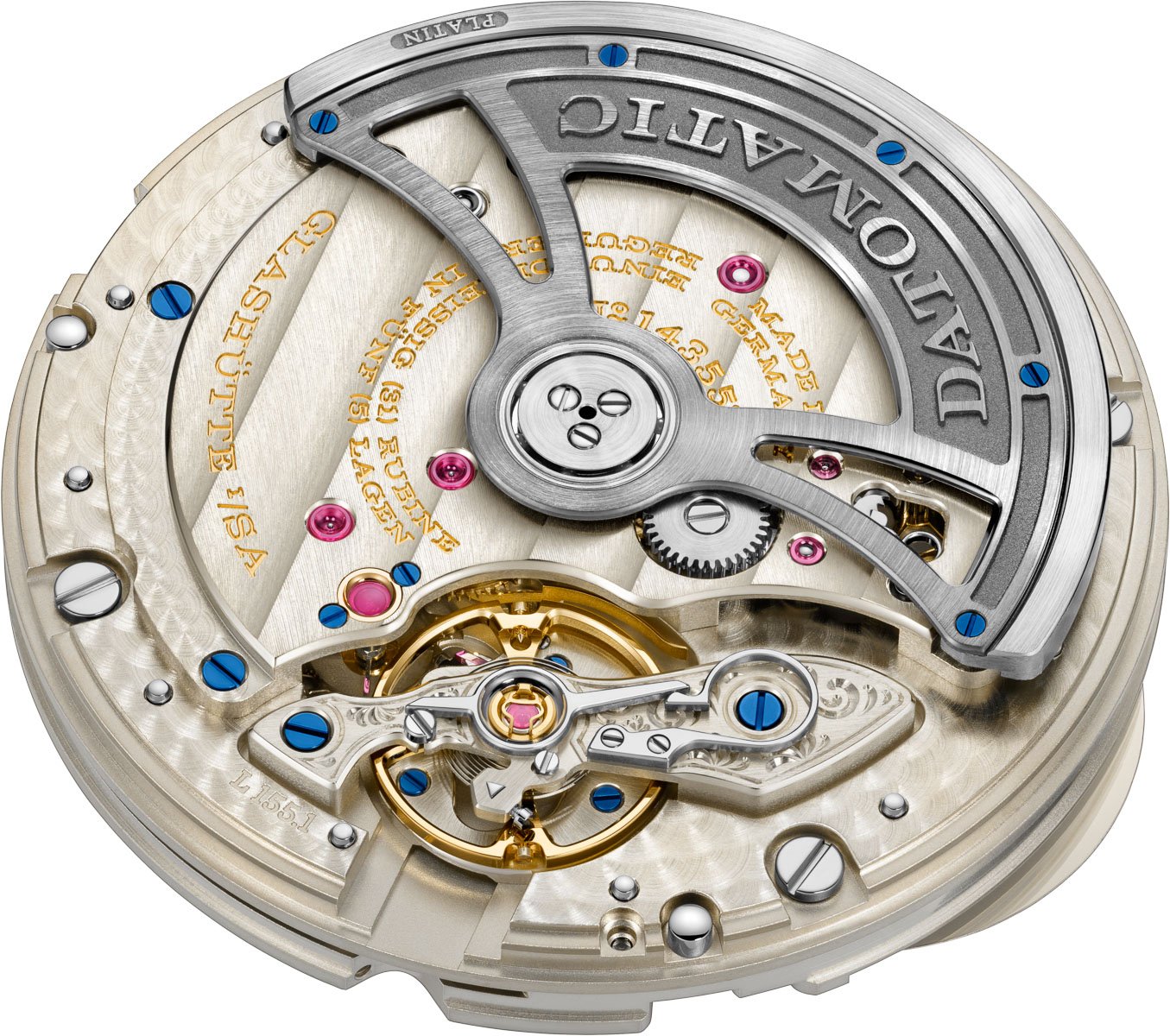 The beautiful movement features a skeletonized and partially black-rhodium-plated central rotor with a centrifugal mass in 950 platinum. As you can see, it is signed “DATOMATIC”, referring to the automatic date function of the movement. Additionally, you will see that the mass is signed “PLATIN”. The manually engraved balance-wheel bridge, which is fixed on both sides, features a stylish wave pattern. The pattern refers to the 120m water resistance of the watch. Furthermore, the characteristic German Silver plate is decorated with the famous Glashütte stripes and the screwed gold chaton that marks the position of the escape wheel. 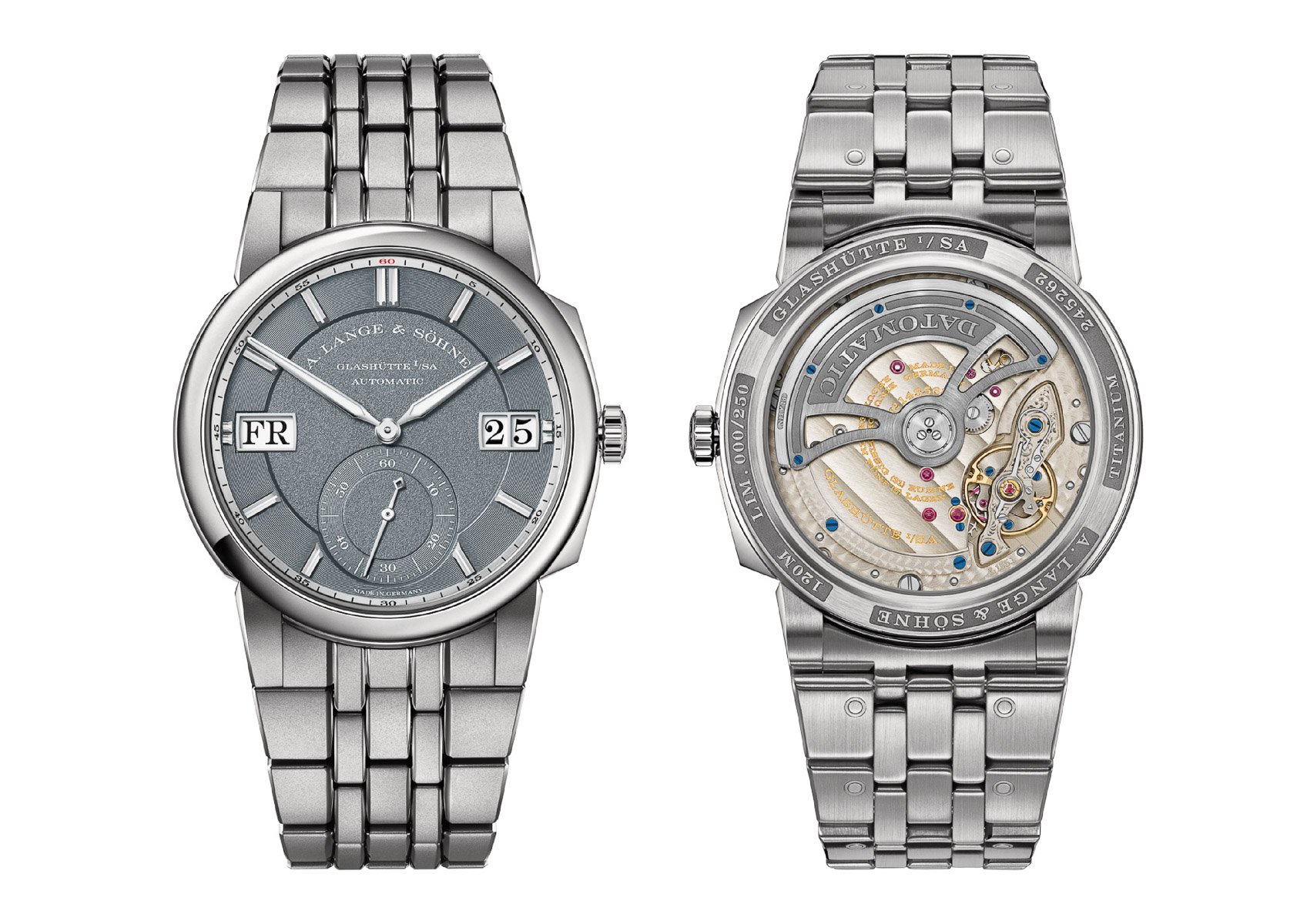 I must admit I had to get used to the A. Lange & Söhne Odysseus when it first came out. As a result, it wasn’t an instant hit for me like many of the other Lange watches are. But over time, I started appreciating the design more and more. It is mostly a matter of putting the watch in the right context. The Odysseus is not aimed to be an equivalent of a Genta design. Above all, it is Lange’s take on a luxury sports watch for the brand’s fans.

I love that approach to design because it guarantees the necessary authenticity and shows the brand’s integrity. But it does leave the overall looks, and they are an acquired taste. What helps out greatly in making this my favorite out of the three available releases is the use of titanium. Lange shows that it can finish a titanium watch up to the same level of perfection as any of its other watches. But the effects of these finishes on titanium look amazing. In combination with the ice-blue dial, this is a great addition to the Odysseus lineup. The A. Lange & Söhne Odysseys Titanium will be available as a boutique exclusive in a limited edition of 250 pieces for €55,000.

Visit the official A. Lange & Söhne site for more information.