Let us present the Citizen Promaster Aqualand JP2000-08E, a watch that was more important for dive-watch history than you probably realize. In 1985, almost simultaneously with the introduction of electronic dive computers, Citizen introduced the grandfather of the JP2000, the CQ-1012-50. Its caliber C020 offered features that were unheard of in dive watches before then — an electronic depth gauge, a dive timer, and a memory to store the maximum dive depth and time. As an extra service, military-issued no-decompression depth and time (no-deco) limits were printed on the outside of the watch’s strap. 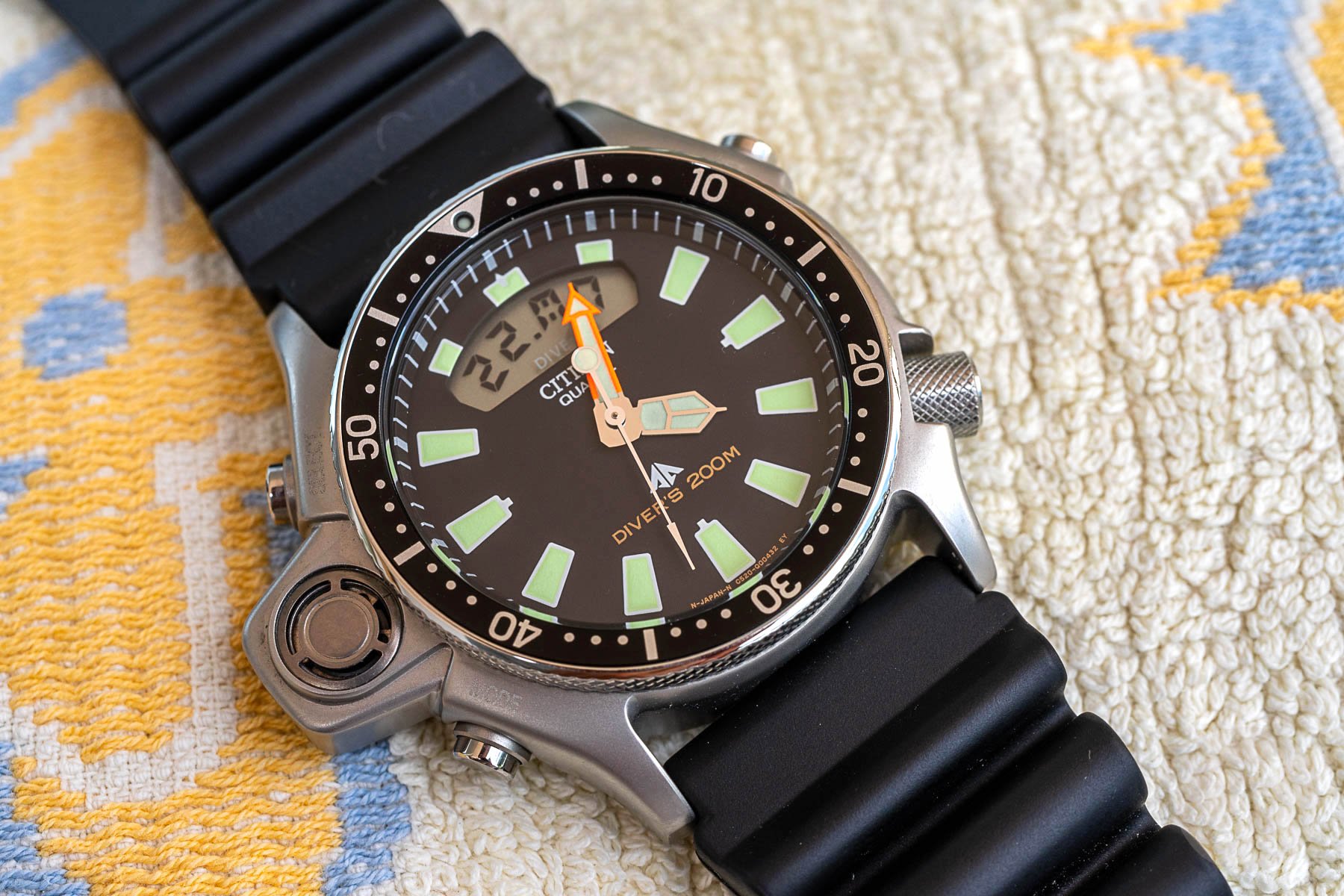 Starting in 1959 with the Parawater, Citizen had already played an essential role in dive-watch development by 1985. But it was the Aqualand that stirred up the entire scuba-diving scene. It was the first traditionally styled 200m dive watch combined with cutting-edge technology. And with its great extra functionality, it quickly became one of the most beloved dive watches worldwide. I don’t want to “dive” too deep into the history of Citizen dive watches in general, but you shouldn’t miss Michael Stockton’s article on it. 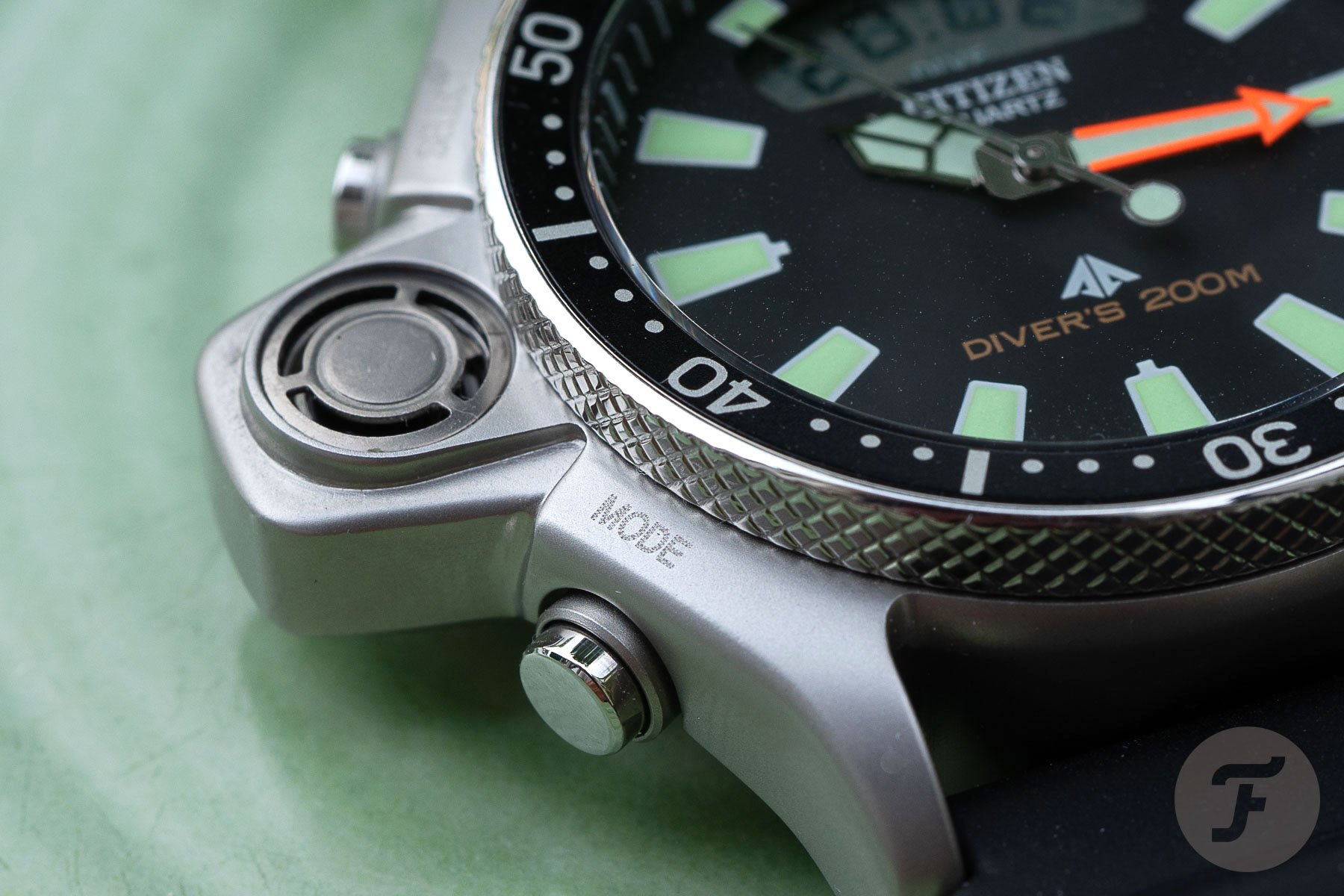 A fun fact is that although Citizen only introduced the Promaster line in 1989, its logo — an arrow design signifying the concepts “go higher” and “go deeper” — had already been on the dial of the Aqualand since 1985. 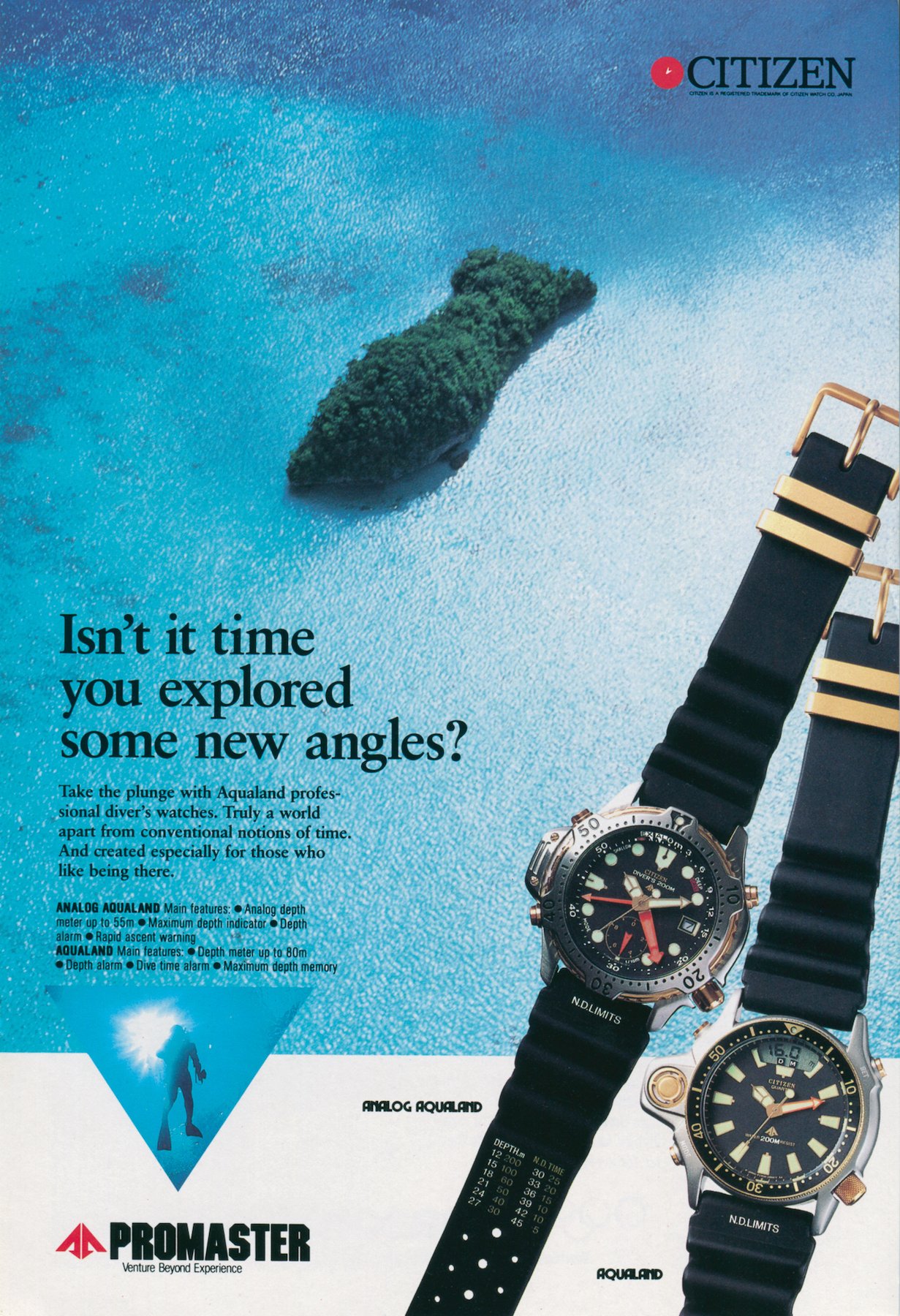 Not much about the Aqualand has changed since its debut in 1985. Besides stainless steel, the watch came in a few different variations, including a two-tone version and a version with a black case. While we know that the C020 module became the C022 in 1988, Citizen has no details on the actual changes to the module other than that it was available in Japan by that year. 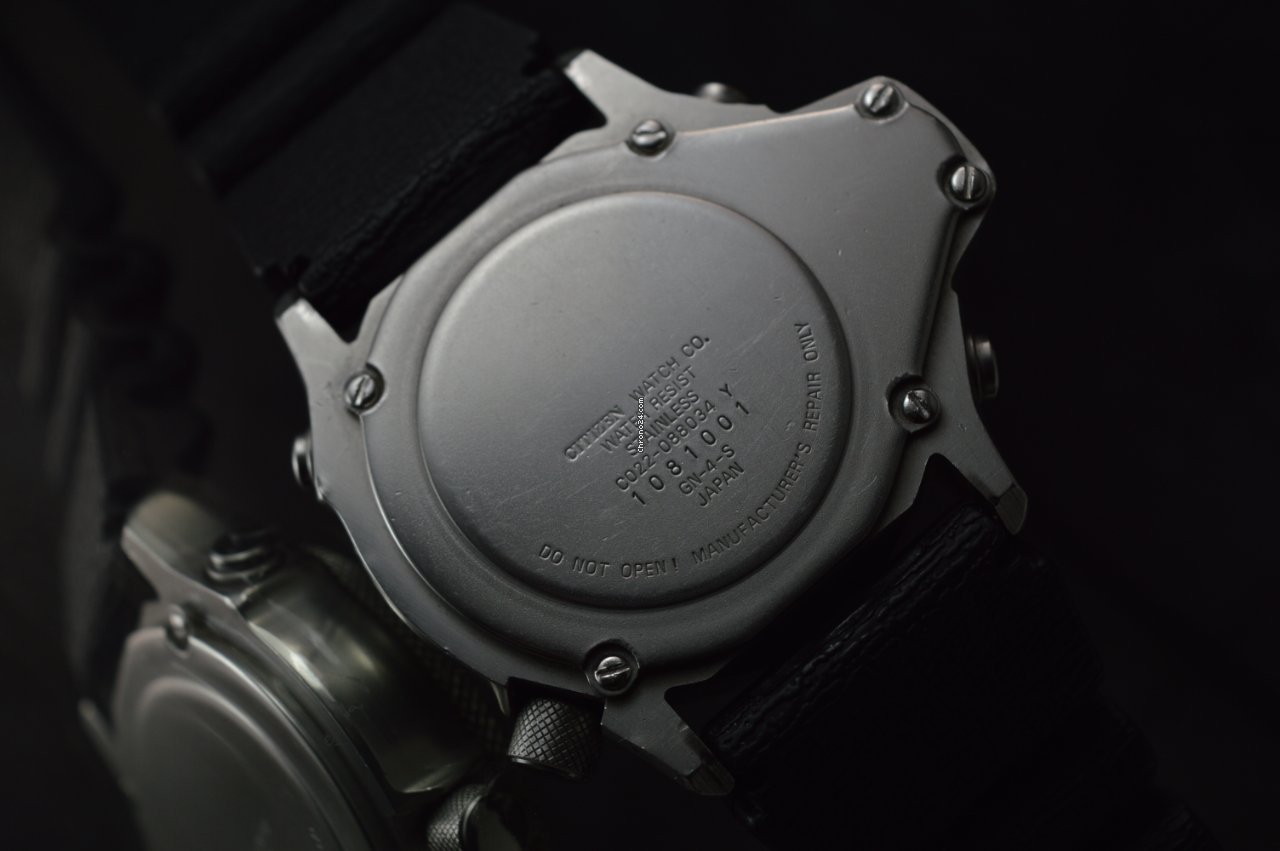 Photo courtesy of OnWatches in Italy

The first remarkable difference only came in 1996, over 10 years after the Aqualand debuted. The module changed and was built on a whole new platform, and instead of three batteries, it now relied on just one. The new module brought some extra functionality as well. Dive alarms for maximum depth and ascent were added, as well as a log for the wearer’s four most recent dives. Consequently, the module number changed to C520. There were not only changes to the module but to the watch’s case as well. The case back, formerly secured by six screws, became a more conventional round, screw-down type. 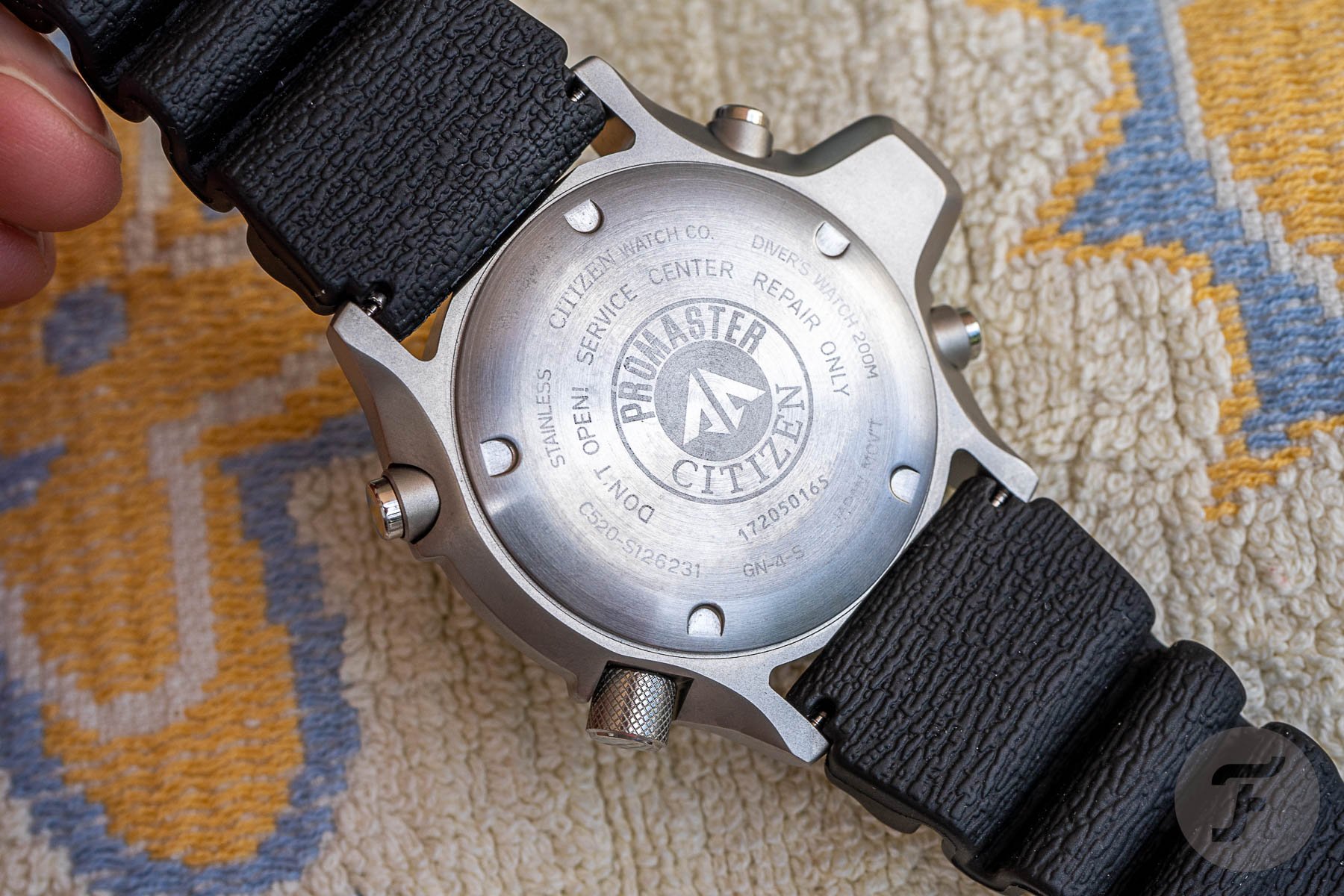 Compared to other dive watches at the time of presentation in 1985, the Aqualand’s additional dive-related functions certainly contributed to its enormous popularity. I think, however, that the shape of the watch with its very present depth sensor also had an effect. At a glance, its appearance showed that it was a unique watch and immediately attracted attention. And the fact that it didn’t change visually in over 35 years makes the JP2000 Aqualand instantly recognizable. Meanwhile, everybody — even those not active in the dive scene — will more or less know this watch and understand that it must be something special. 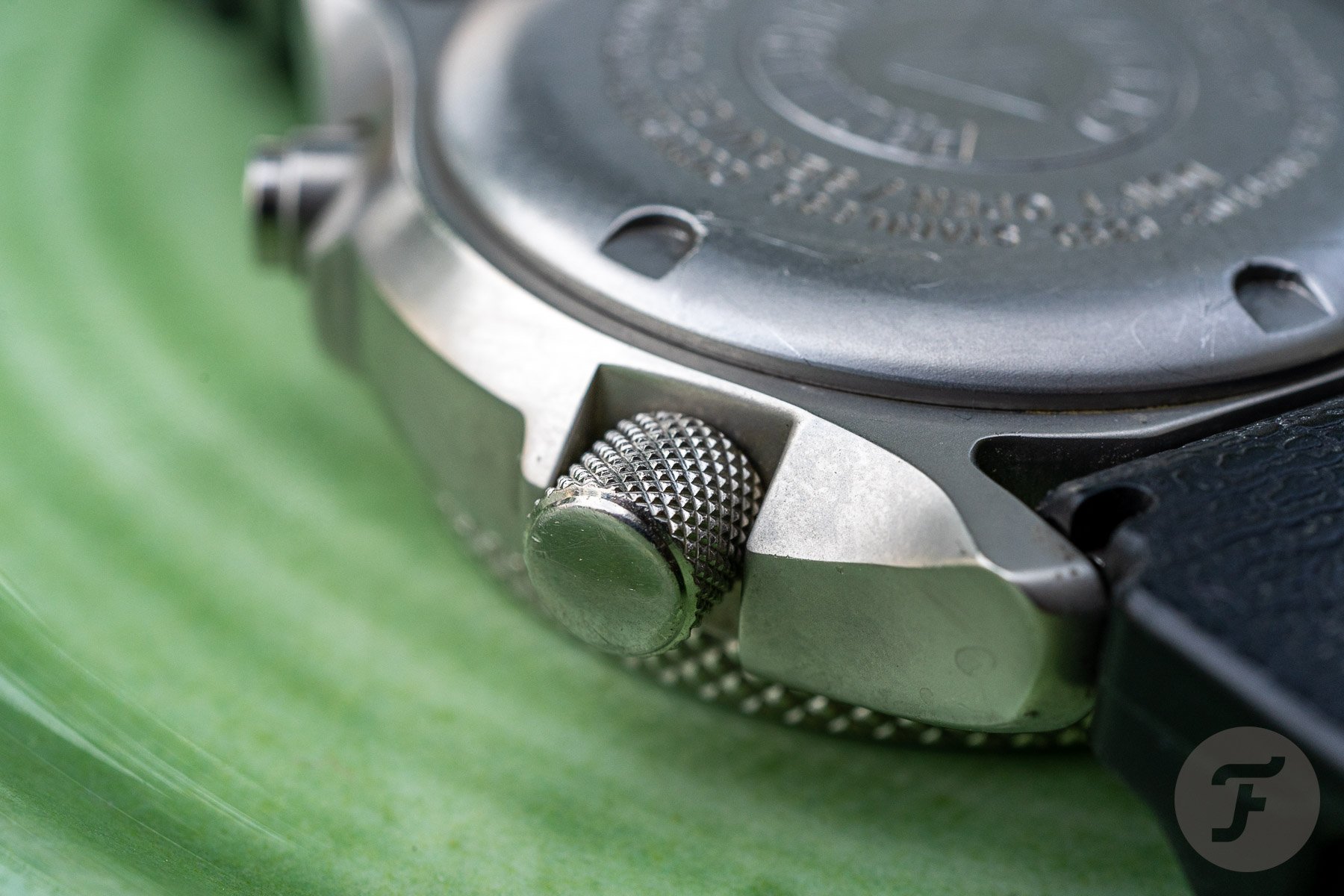 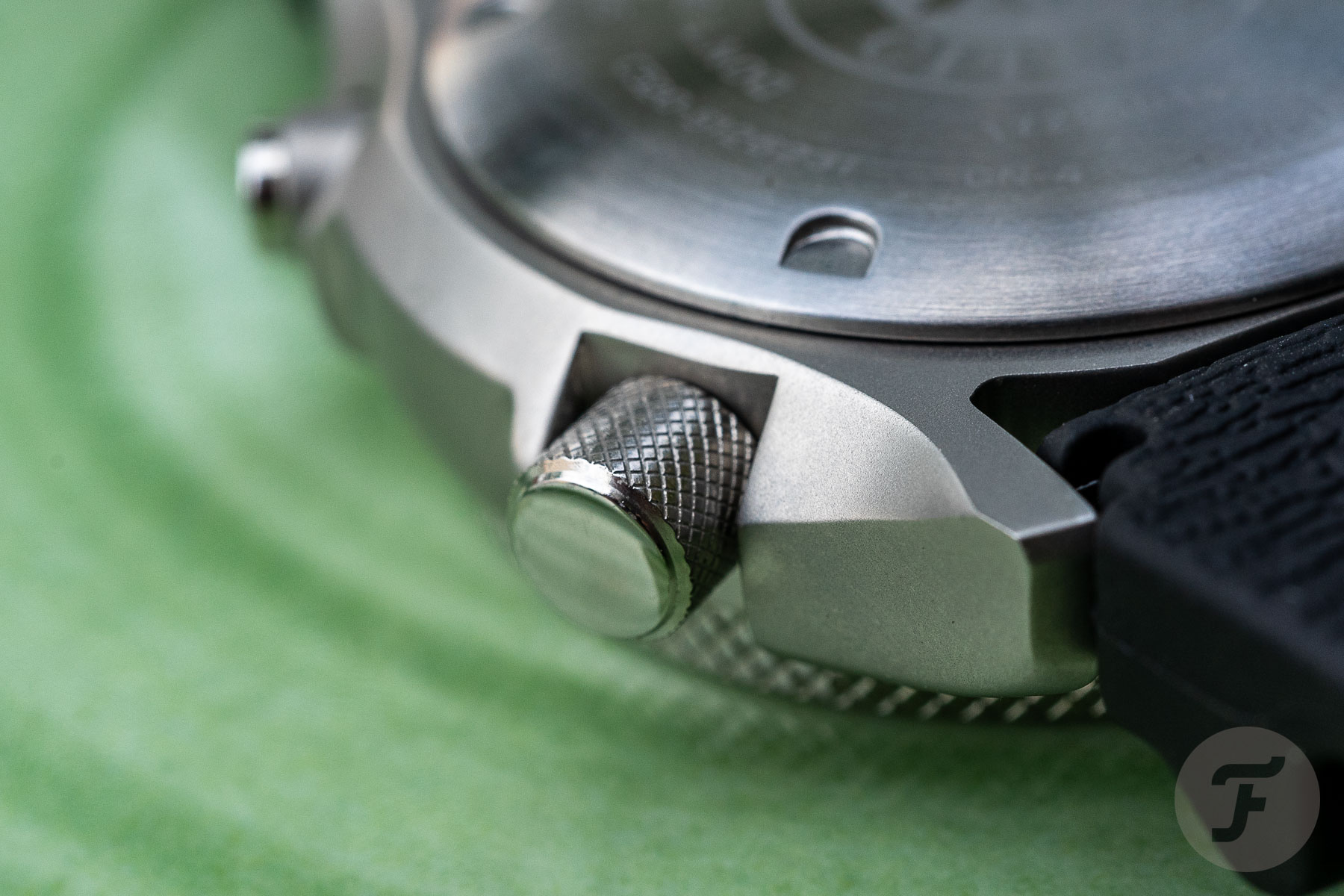 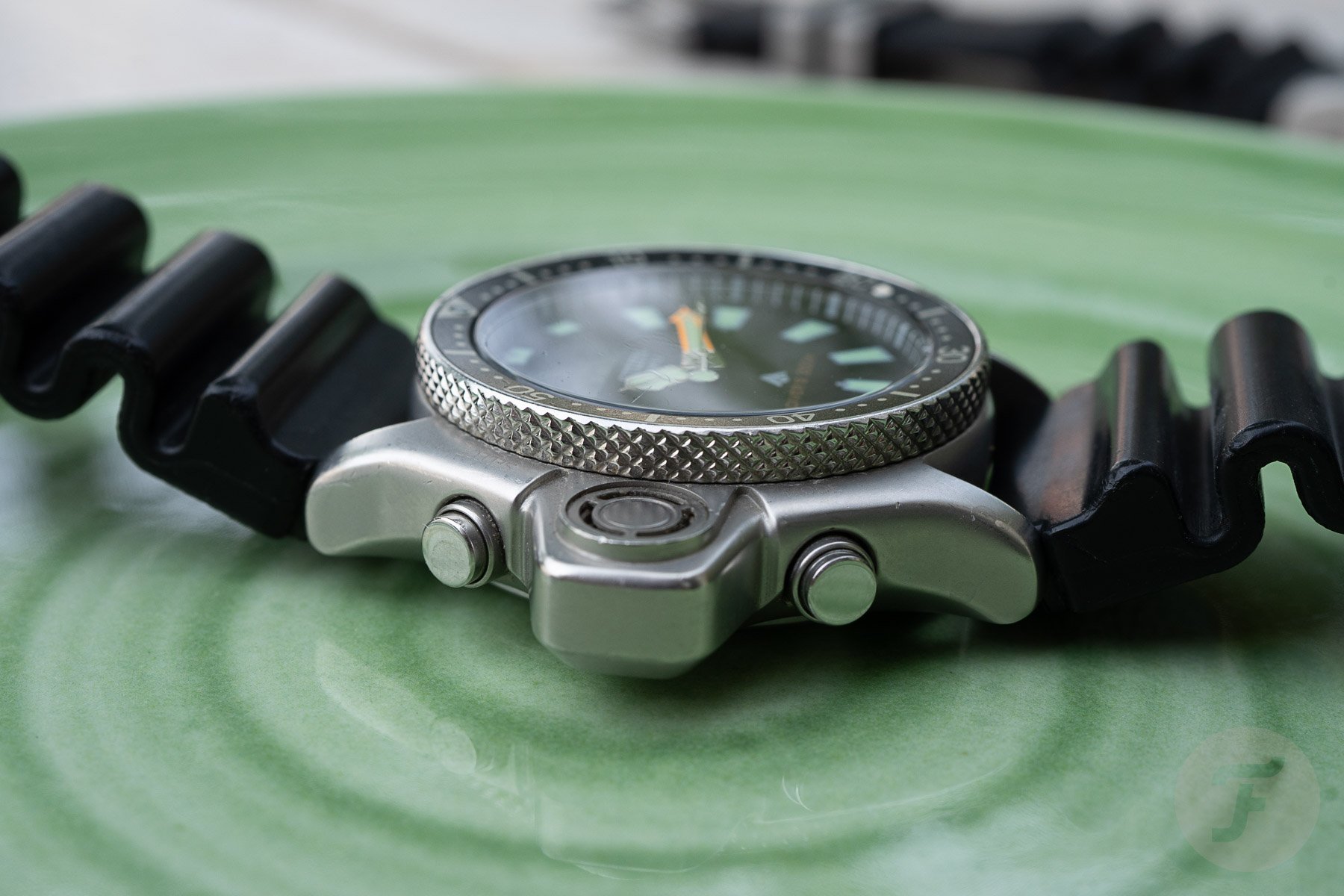 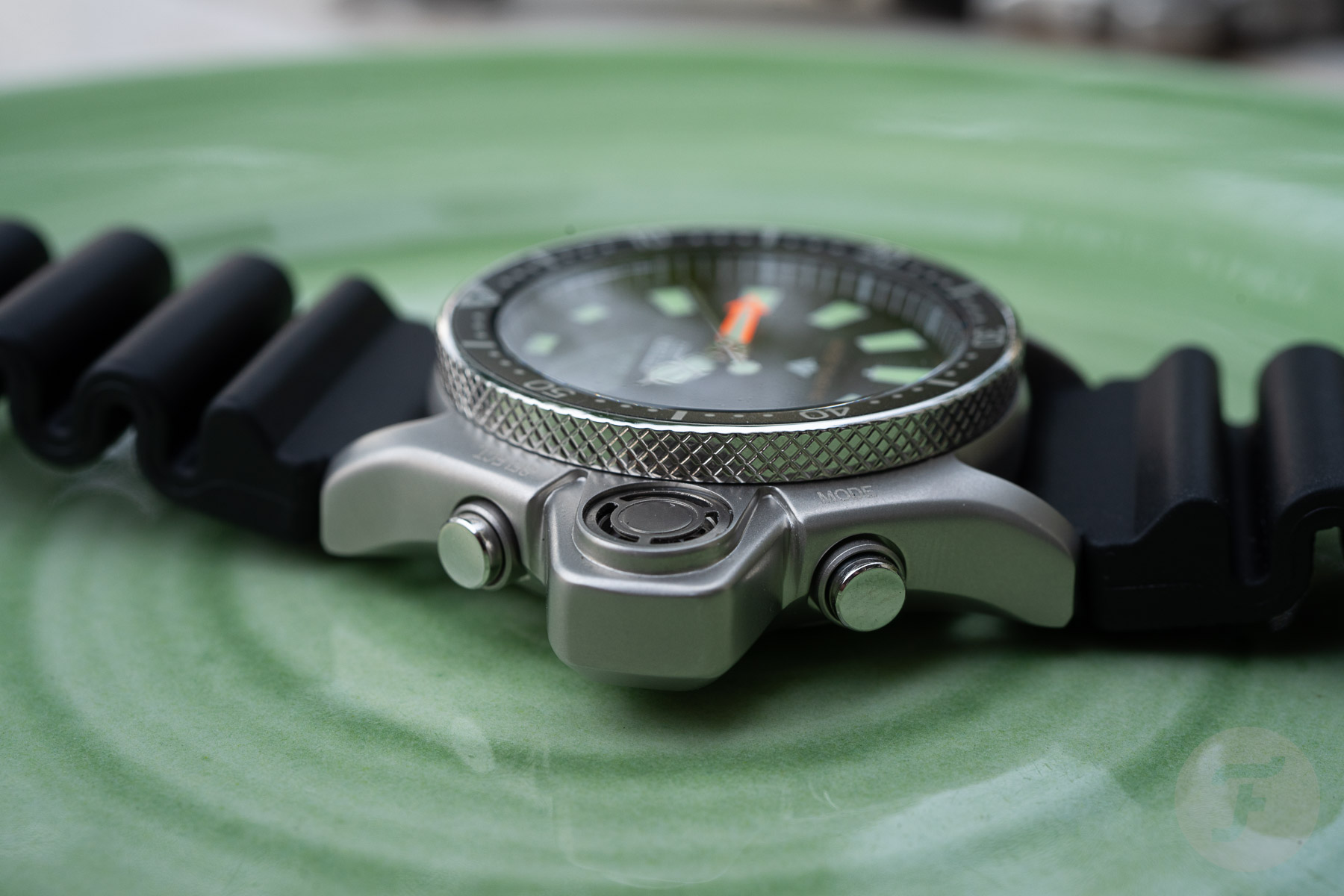 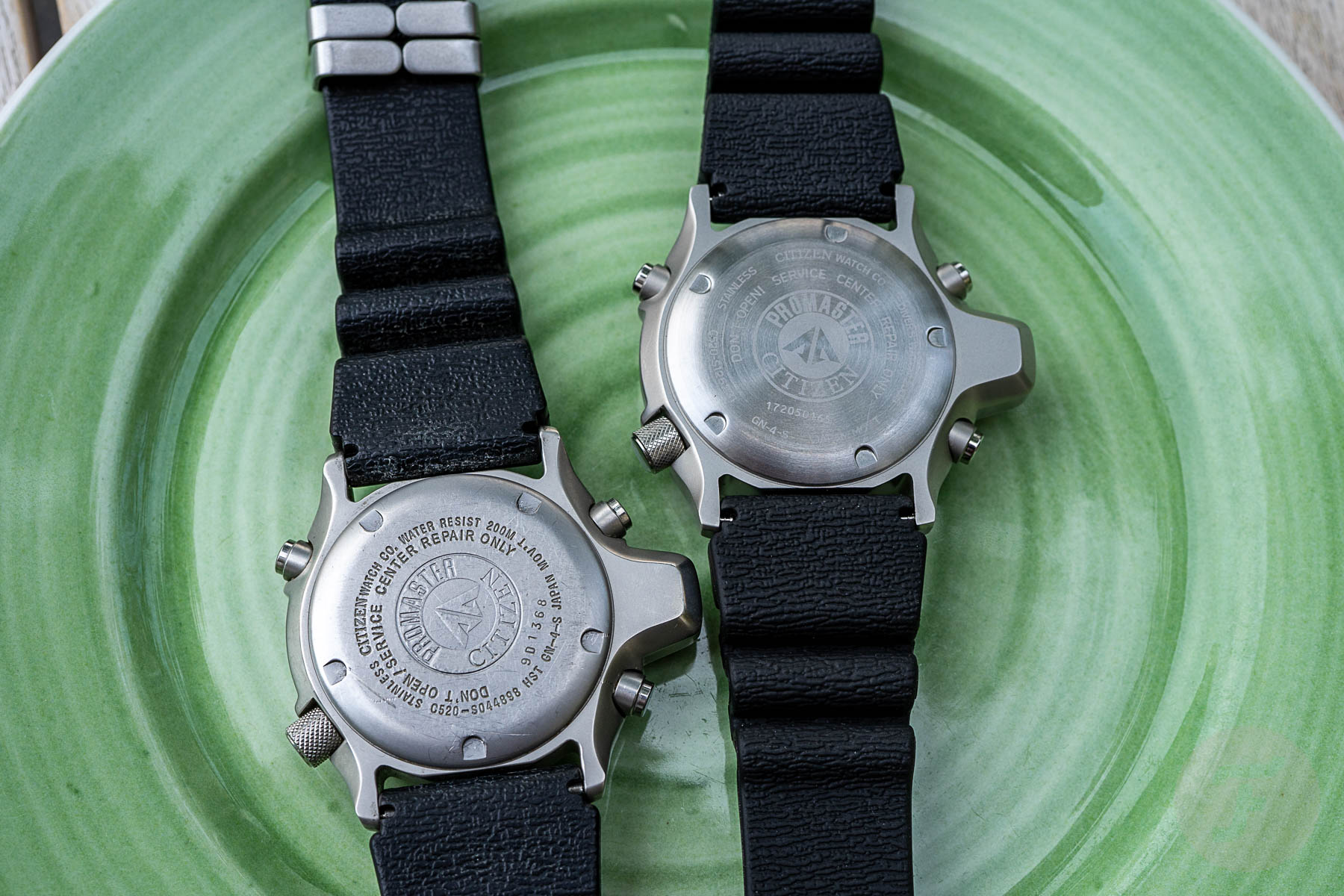 Older vs. current JP2000 case back

Compared to the early CQ-1012-50, the changes made to the JP2000 are barely visible to the untrained eye. The changes made to the JP2000 itself since 1996 are even less noticeable. However, there are some differences in the details. They’re in the surface finish of the case back, the crown, and the bezel. My opinion is that the earlier JP2000s are slightly more refined; it seems that most changes have been made to cut production costs. On the other hand, I don’t think that the quality of the watch has drastically declined as a result. It’s easier to see than to describe, so check the gallery above to understand what I mean. 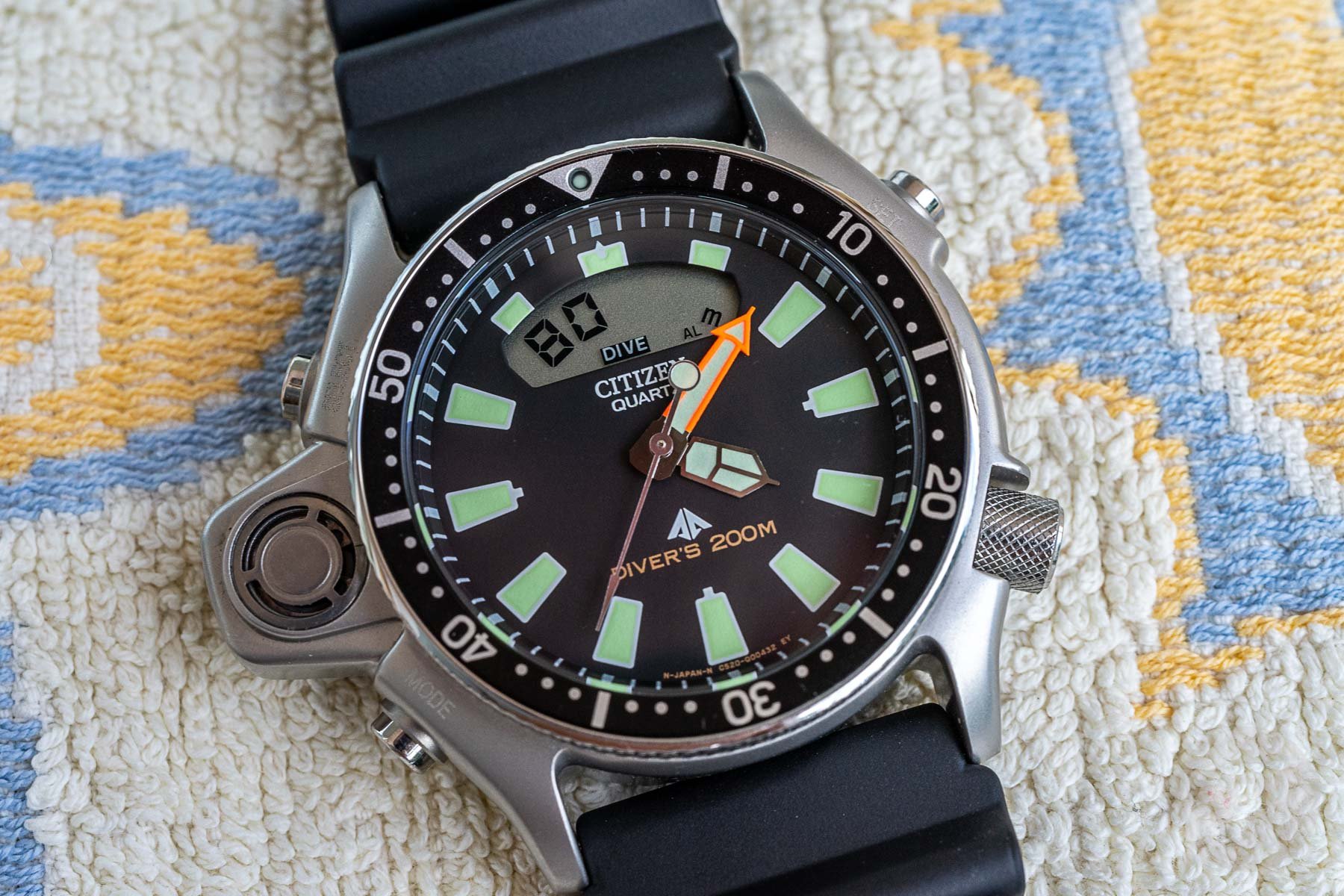 But unmistakably, besides its good looks, the Aqualand became popular because of its dive-related functionality. And although it’s a bit complicated, let me try to list the features. Of course, using the digital display as a regular digital watch, there are the hours, minutes, seconds, date, and day functions. In regular operation mode, the user can alternate through them by pushing the top-right (set) button. Pushing the bottom-left (mode) button switches to the alarm function and the digital chronograph. 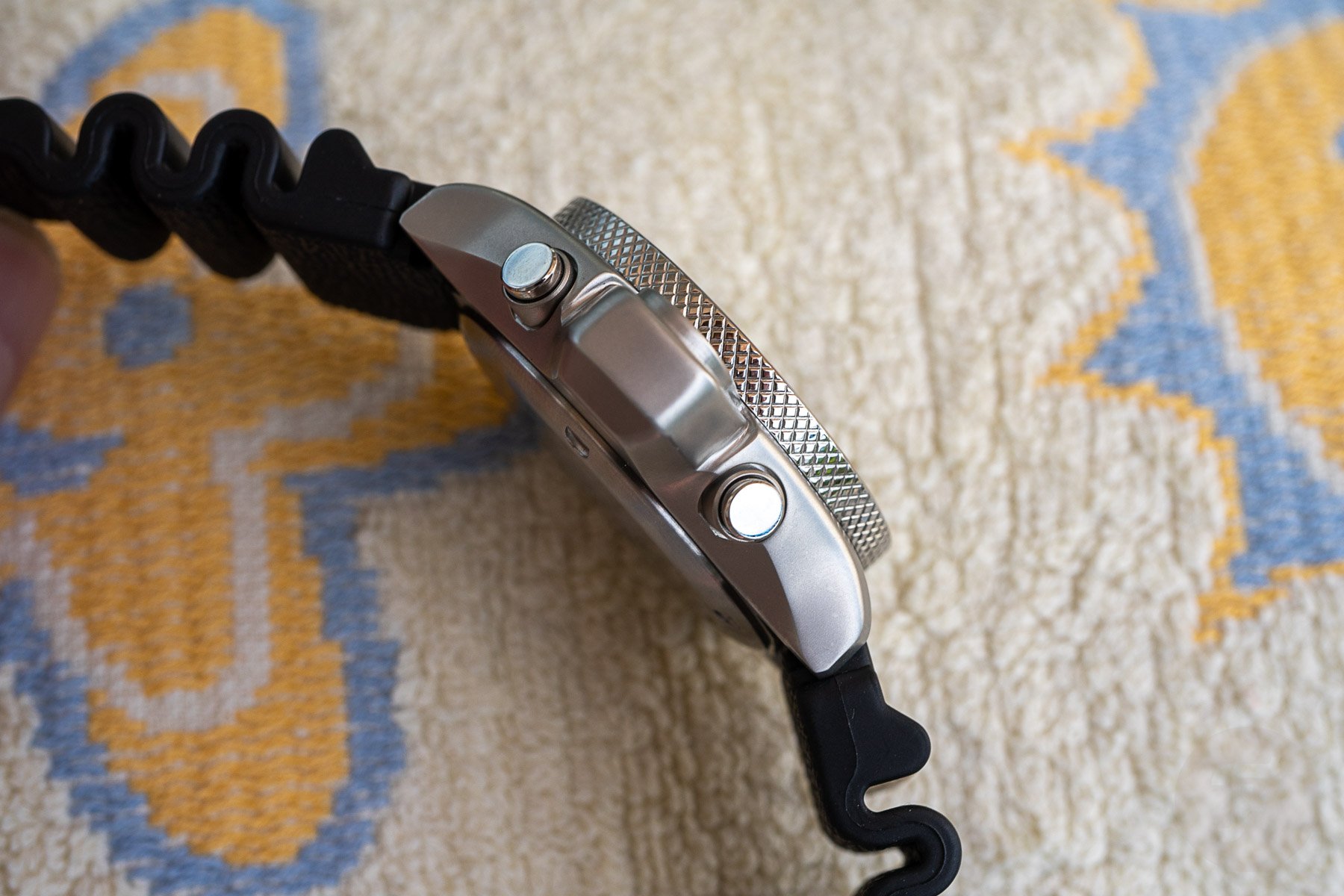 And then there are the dive functions. Pushing and holding the bottom-left pusher changes the JP2000 into a dive computer. First, the user can view the data from the last four dives — date, time, maximum dive depth, and duration. And after that, the user can set the maximum-depth alarm and dive time. From there, one push of the top-right (select) button is enough to enter the actual dive mode. Initially indicating 0.0 meters, the digital display automatically shows the actual dive depth exceeding -1.0 meters. While diving, the display optionally shows the dive time and maximum dive depth, again via a push of the top-right button 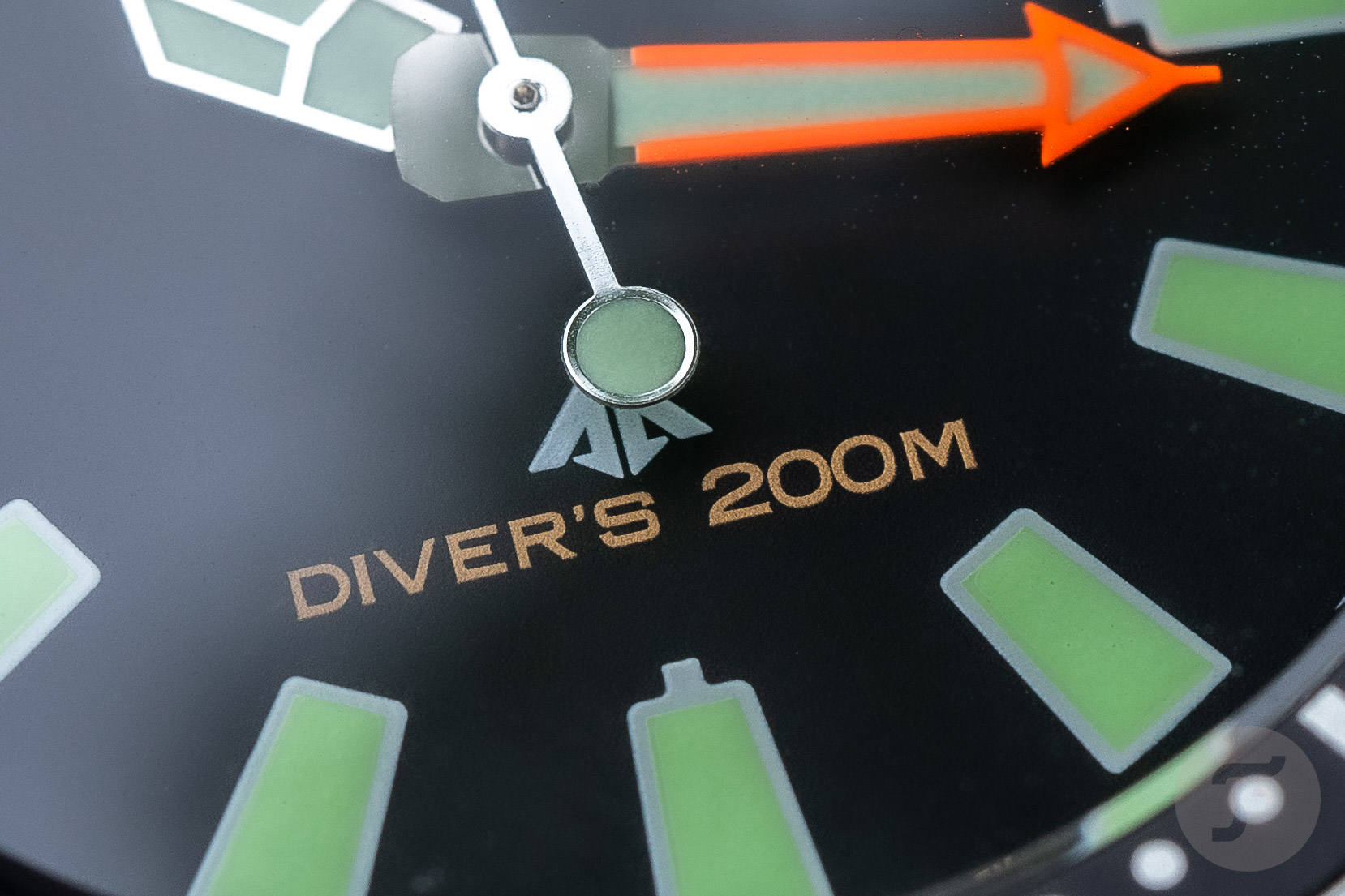 In addition to the features mentioned above, the JP2000’s C520 module has warning functions that a diver can use to stay safe. If the ascending speed during a dive exceeds 1.5m (5ft) per 10 seconds, an alarm sounds as an ascending-speed warning. Furthermore, if during depth measurement, the watch recognizes a sudden change in depth of 4m in one second, ER and the current depth will show alternately in the display. And to round off these warning functions, I’d like to mention the well-known end-of-battery-life indication, which advances the seconds hand once every two seconds. I won’t dive any deeper into the watch’s functionality and possibilities here, but if you’re interested, you can read about them in the complete C520 module manual. 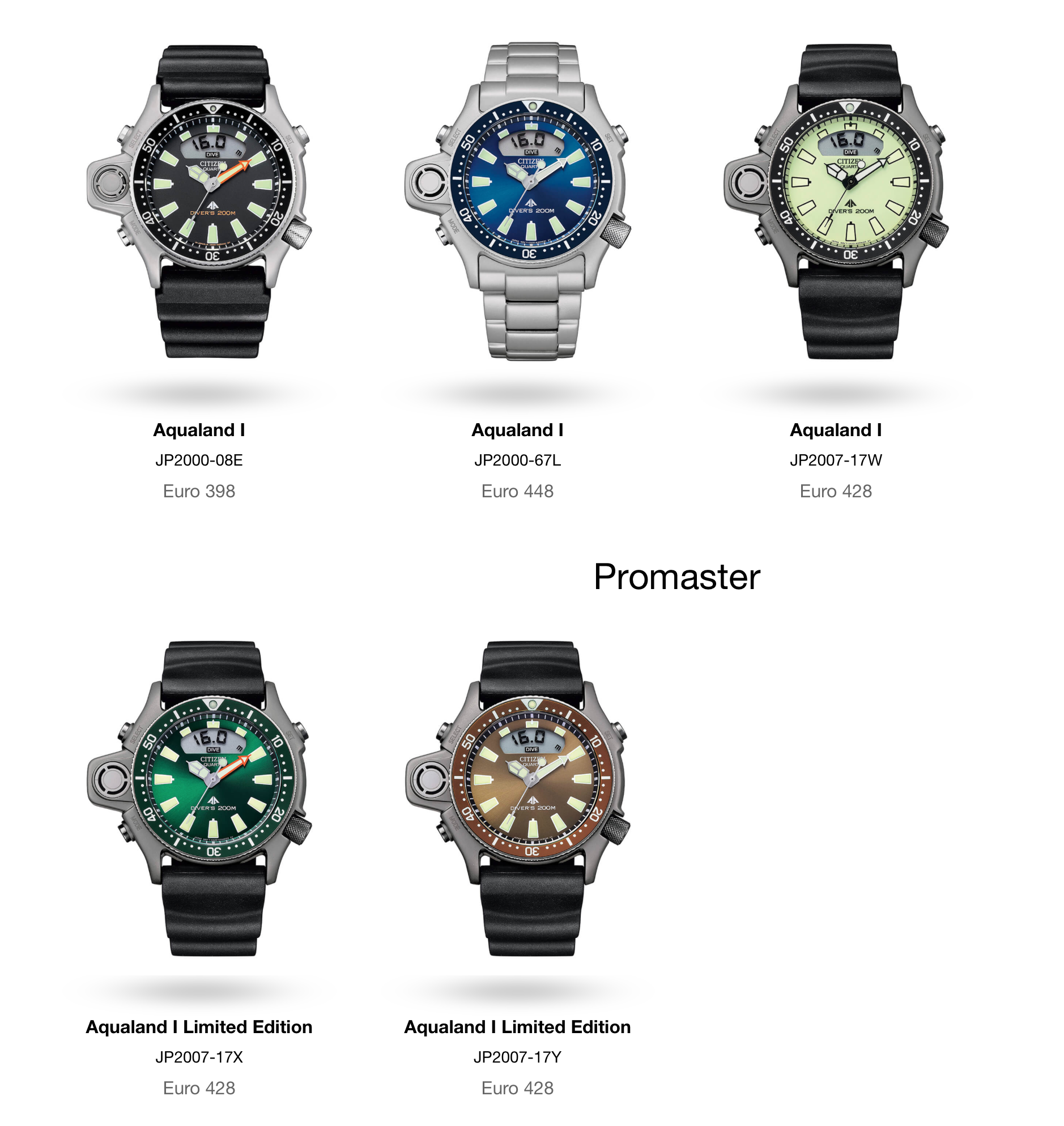 The folks at Citizen told us that the Aqualand — first the CQ-1012-50 and now the JP200x — has always been in the brand’s collection since 1985. However, we find that the current JP2000-08E doesn’t always appear on local official Citizen websites. For instance, unfortunately, neither the US nor the UK official websites show the watch. Some European countries are luckier with even three models. Jorg, for example, recently reviewed the JP2007-17W that is also available in The Netherlands and Germany. But it seems that your best chances are in Italy and Spain, where you’ll find no less than five JP200x models, including two limited editions. It’s probably possible to order JP200x models through official Citizen dealers in other countries. Otherwise, the internet is your friend. I wouldn’t be afraid to buy a JP2000-08E sight unseen. 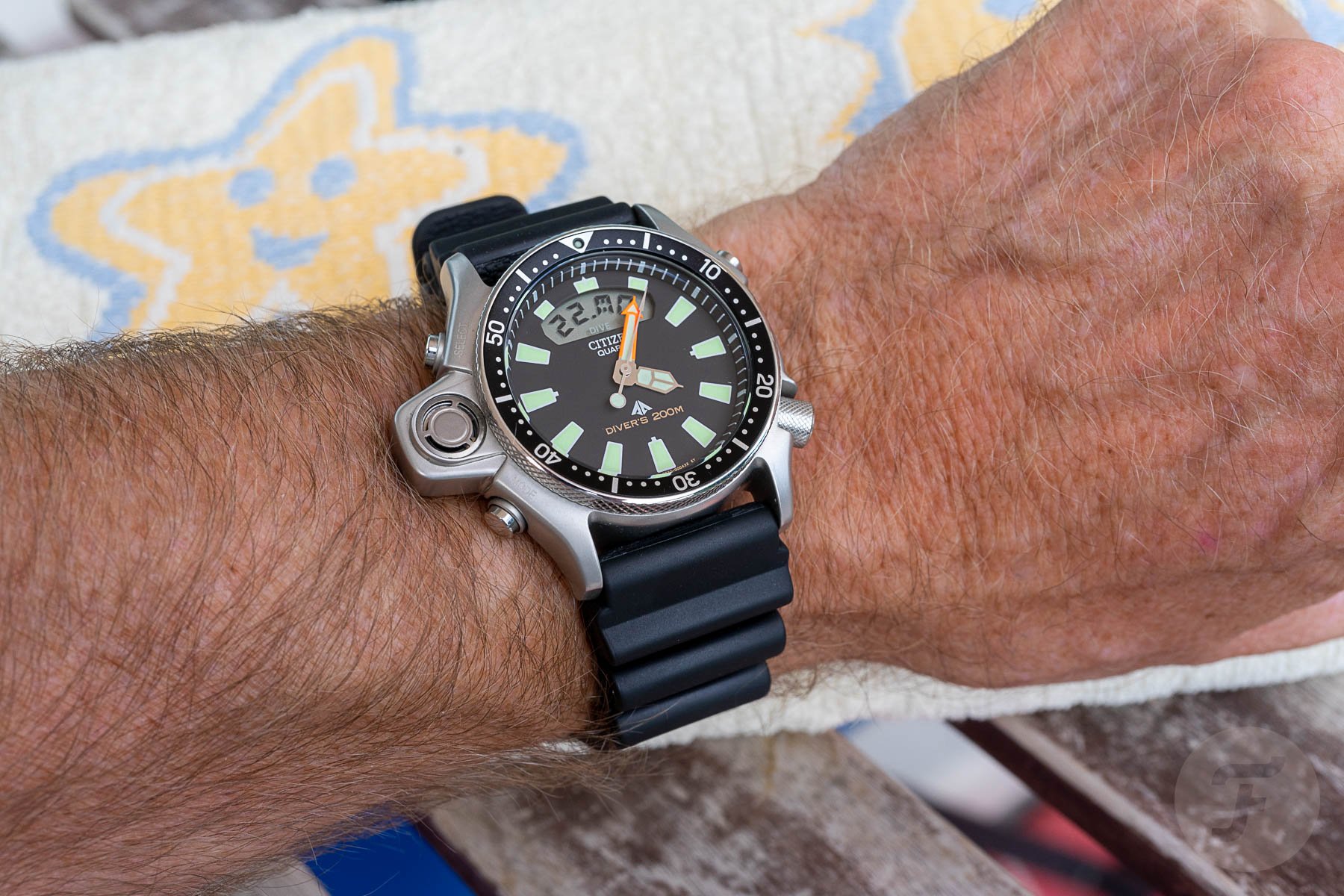 With prices varying from €398 for the basic JP2000-08E model on a rubber strap to €448 for a blue-dialed model on a stainless steel bracelet, I think you can’t go wrong with such a legendary watch. My preference would be the JP2000-08E, as it is closest to the original. But what do you think? Which model do you like best, and does it deserve a place in your collection?

Don’t hesitate to leave your comments below or reach out to me @gerardnijenbrinks.