Watchmaking doesn’t have its own version of The Rock & Roll Hall of Fame, but it should. Who do you think would find their names added to the annals of watchmaking legend if it did? I bet not too many of you named the watchmaking sensation that is the one and only Svend Andersen. I had the pleasure of meeting Mr. Andersen last year at his atelier in Geneva, and today, I finally get to go hands-on with the Andersen Genève Celestial Voyager “Sunset Over Cappadocia,” a reverie in wristwatch form.

Svend Andersen launched his workshop in the late 1970s after spending nine years working at Patek Philippe. Over the years, he welcomed and trained high-end watchmakers such as Franck Muller and Felix Baumgartner, to name but two. Forty years later, and with fewer than 1,500 timepieces manufactured, the Andersen Genève Atelier remains at the same location in the heart of Geneva on the Rhône river. In everyday watch-collector circles, Andersen Genève may not be the most well-known brand. But amongst those well versed in high horology, the brand is highly revered, and rightly so. The Celestial Voyager Sunset Over Cappadocia I have in front of me today is the prime example of what over 50 years of watchmaking experience can bring to the table — or indeed, to the wrist. 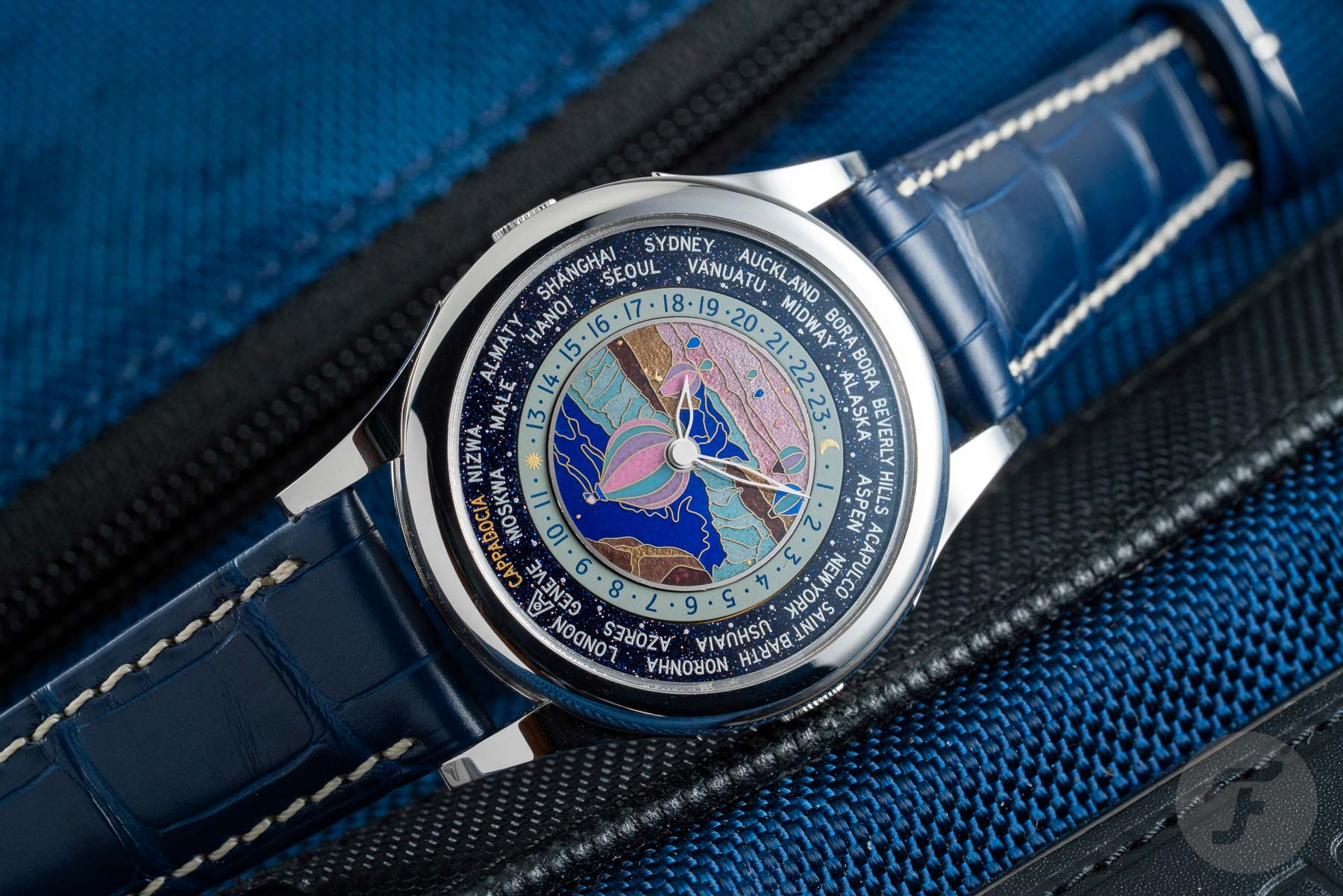 Andersen Genève conceived and manufactured the Celestial Voyager Sunset Over Cappadocia in collaboration with Benjamin Chee Haute Horlogerie (BCHH). It combines the art of cloisonné enameling and engine-turned guilloché with the classical world time complication and numerous intricate movement and case finishing techniques. To top it all off, Andersen Genève chose to house the incredible dial and movement in a platinum 950 case for an extra dose of opulence. This truly is luxury watchmaking at its finest. 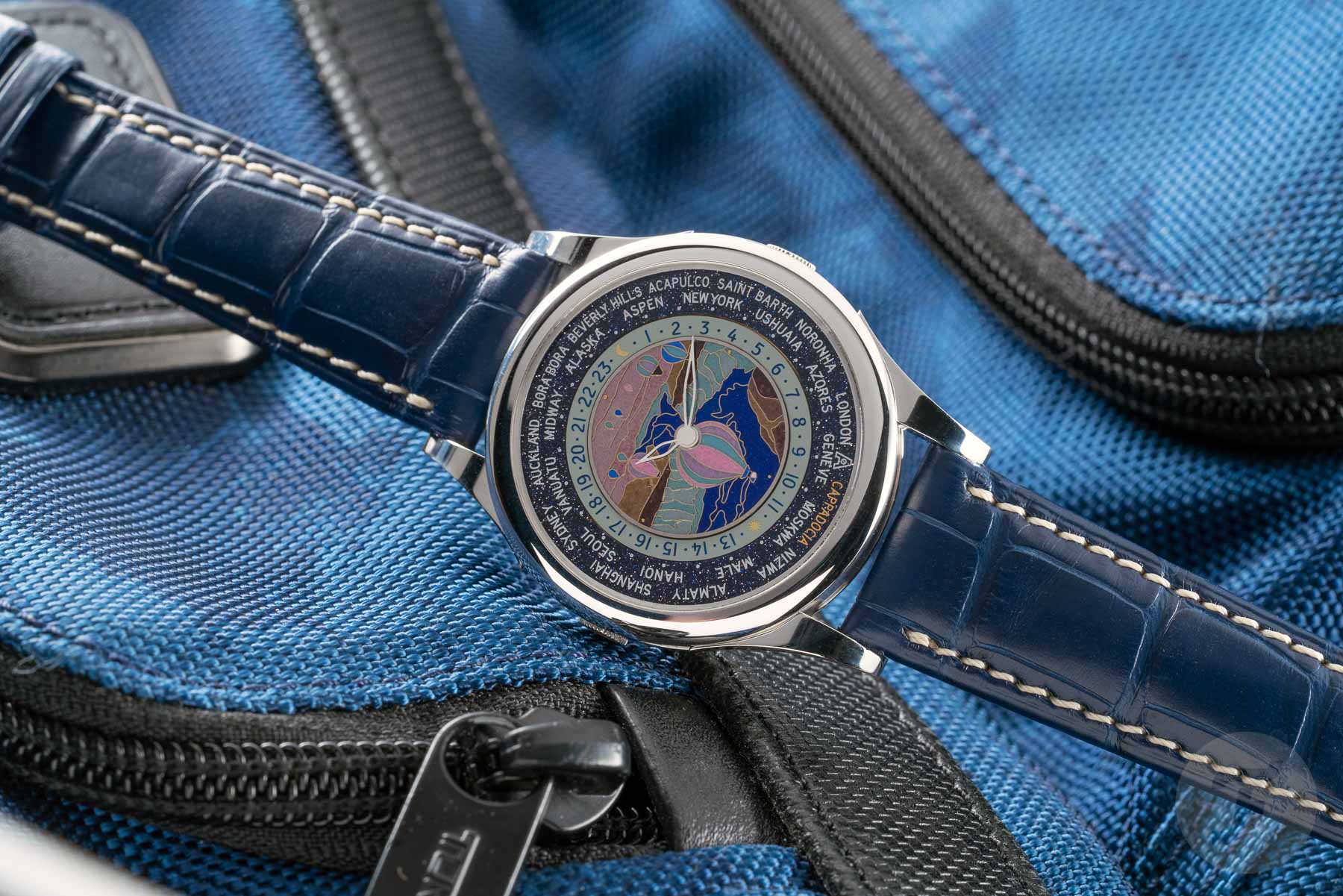 Given the highly bespoke nature of the BCHH brand and its very low production numbers, clients can customize nearly all aspects of the Celestial Voyager. From the city names on the ring to the enamel dial image and the guilloché pattern on the rotor — this watch is designed to be personal. It’s also worth noting that the watch is wholly produced in Switzerland. That means Andersen Genève manufactures nearly every single individual component in its atelier, with the cloisonné enamel dial handcrafted in La Chaux-de-Fonds. 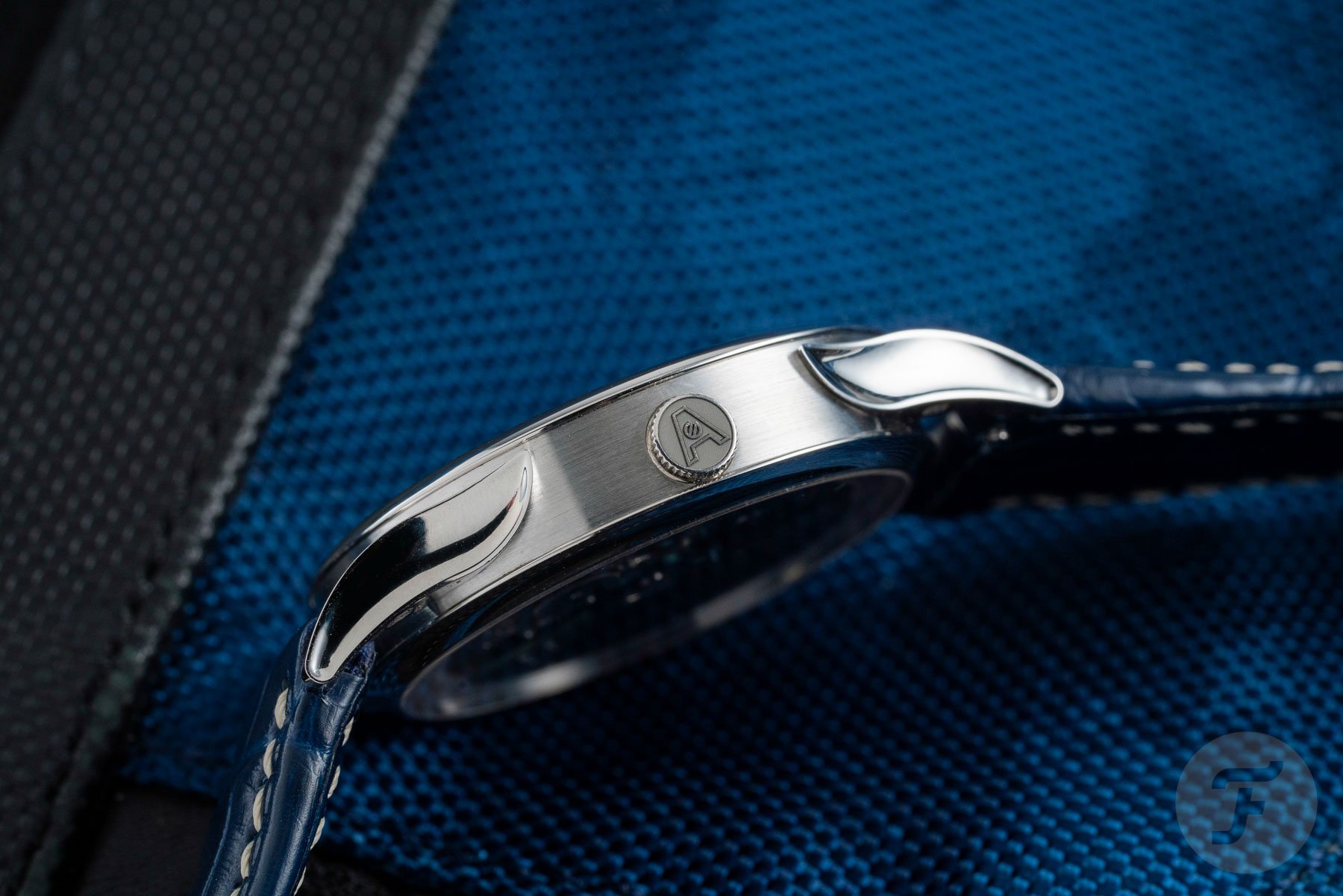 Platinum: the noblest of metals

The extensively hand-finished platinum 950 case features a multi-part construction, with those wonderful flowing lugs soldered into place. Andersen Genève describes the shape of these lugs as “ailes d’aigle”, which translates to “eagle’s wings”. I think the term perfectly describes the shape! Bold and elegantly flowing. I challenge you to find more beautifully-shaped lugs. 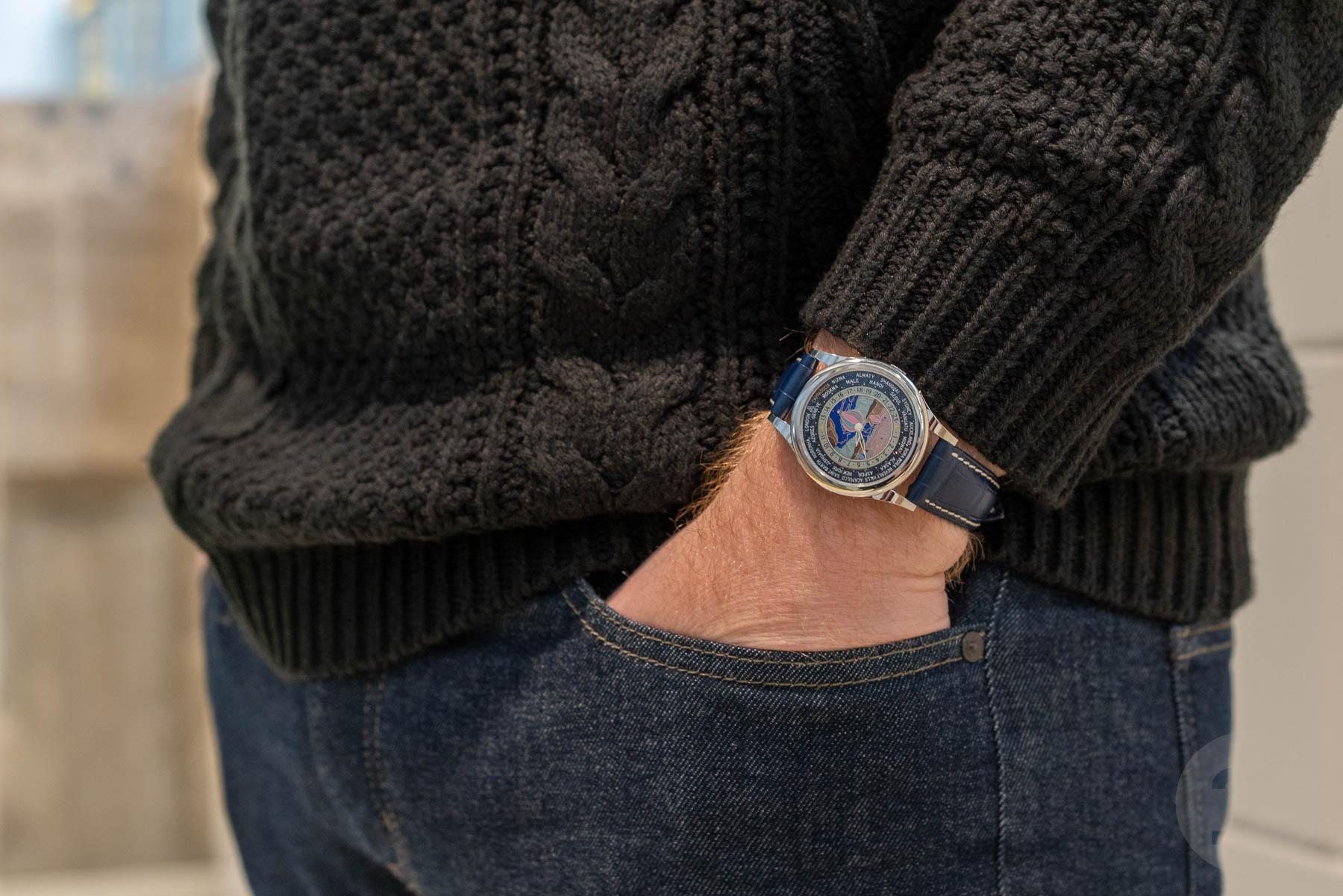 In terms of wrist presence, the Celestial Voyager Sunset Over Cappadocia offers maximum impact for minimum real estate. Measuring just 37.8mm in diameter and 10.1mm in height, the watch easily slips under a shirt or jumper cuff. I’ve had many watches on my wrist that have been a “pleasure to wear”, but this one is next level. As one of the heaviest metals used in watchmaking, the platinum case reminds the wearer of its presence despite its demure size. 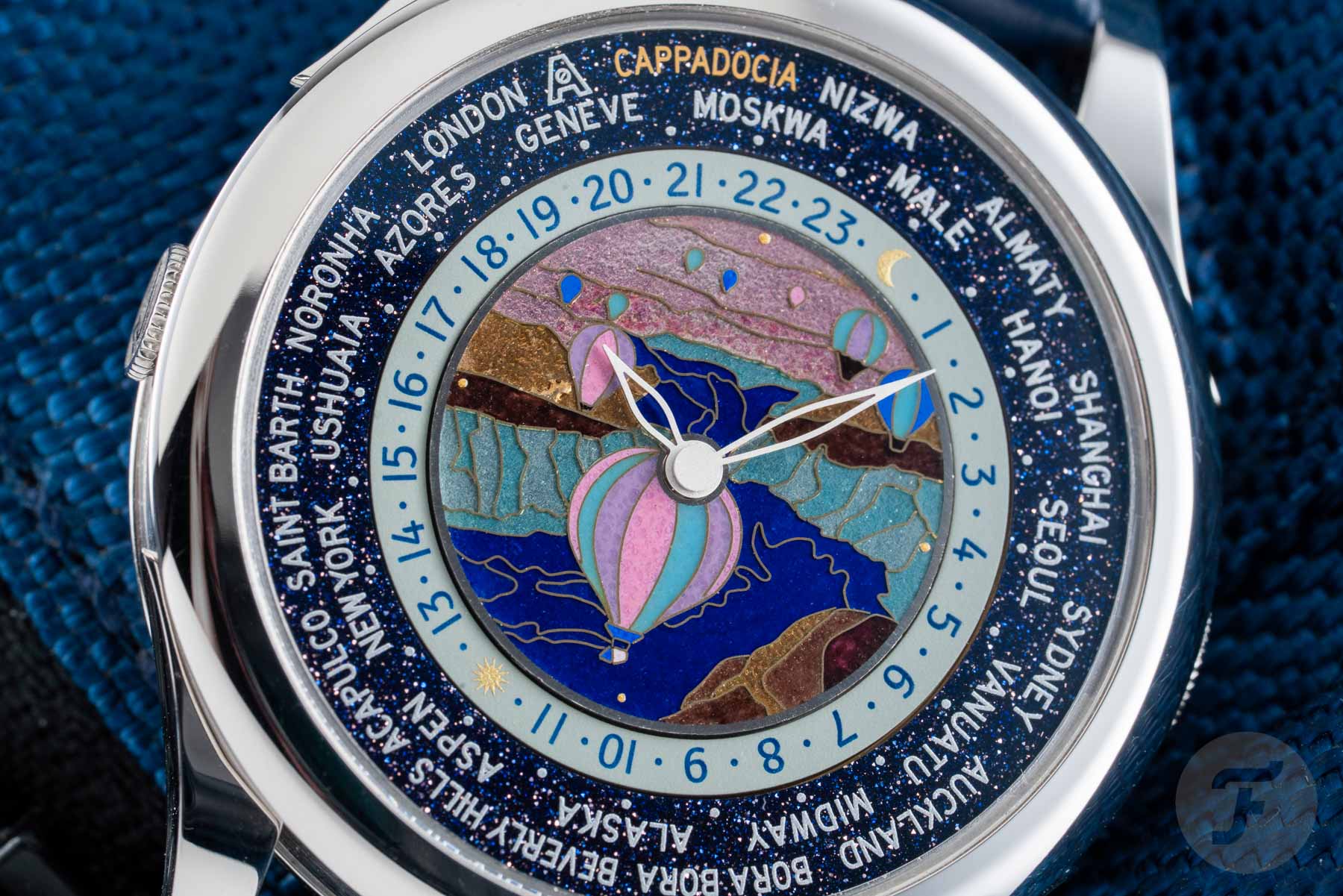 The unrivaled beauty of the Celestial Voyager dial

One cursory glance at this dial, and it’s obvious what it is — a masterpiece if ever there were one. The Celestial Voyager features a wonderous shimmering aventurine glass city ring. According to Andersen Genève, this is the Worldtime watch to use this beautiful material. The centerpiece is the magnificent cloisonné enamel dial. As you can probably imagine, the artisanal skill and experience required to create such a dial are immense. The master enameller forms thin gold wire into the shape by hand, which creates the “Sunset over Cappadocia” scene. All this is done on a solid gold base that measures just 18mm in diameter. The artisan uses minuscule brushes to individually fill in each color and then fires the dial in an oven more than twenty times. Each consecutive firing can destroy the dial and require the master enameller to start all over again.

To see some of the processes of dial creation, take a look through the mini-gallery below. Each step is as intricate and fantastically difficult as it looks.

The “Sunset over Cappadocia” scene evokes the elegance and romance of travel, depicting hot air balloons soaring over the ethereal evening landscape of Cappadocia in Central Anatolia, Turkey. Cappadocia is famous for its distinctive rock formation and, of course, scenic hot air balloon trips. While travel may be unpredictable due to the ongoing nature of the pandemic, the watch conjures warm nostalgia and hope that we may soon be able to enjoy the wonders of this world fully once again. 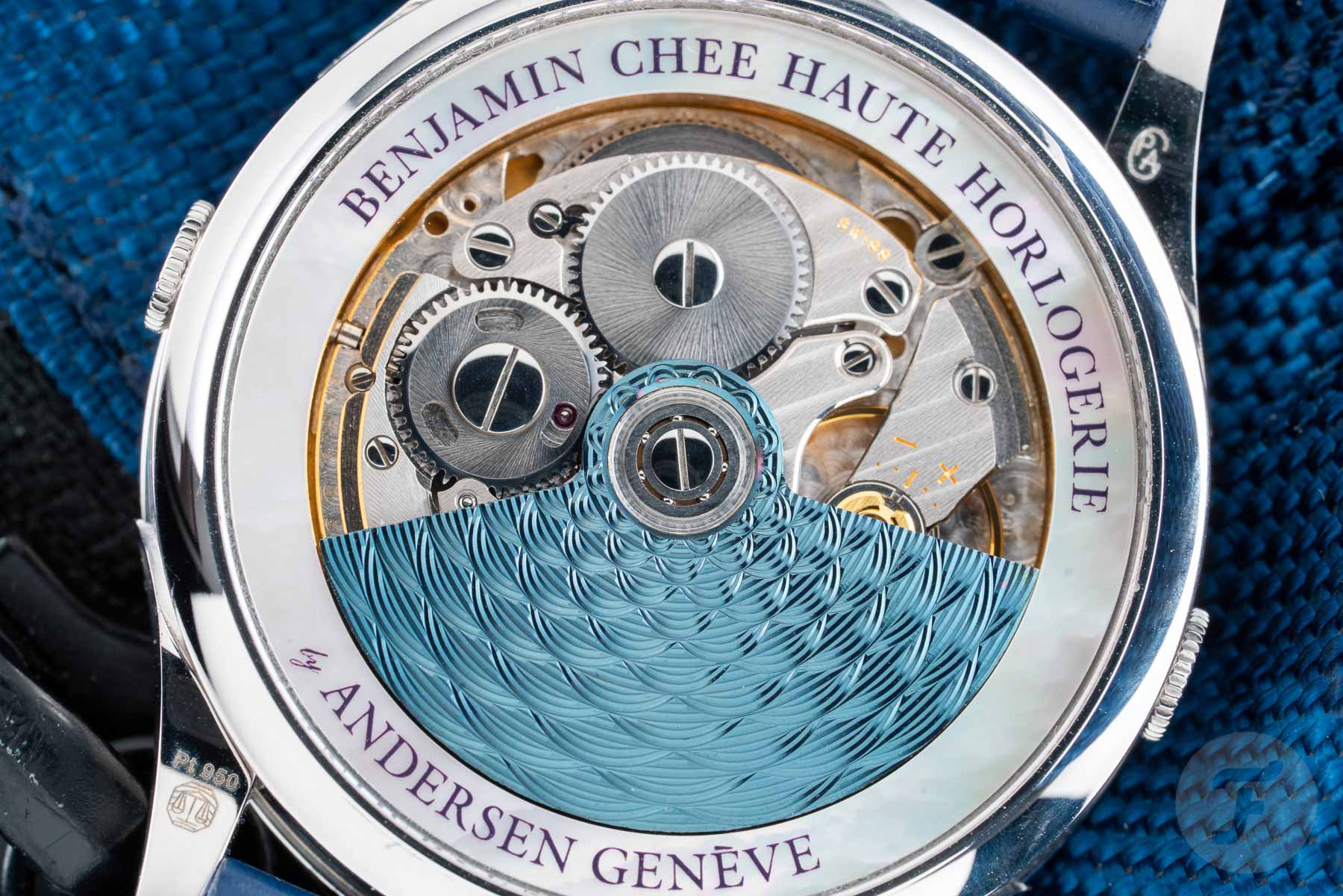 Twin svelte and symmetrical crowns flank either side of the case. Despite their thinness, however, both are incredibly easy to use. Sometimes there can be a trade-off between thinness and tactile functionality. I am happy to state that no such trade-off exists here. The traditional 3 o’clock crown operates the winding and time-setting functions. This crown features the Andersen Genève logo, which as far as brand logos go, is one of my favorites. What, doesn’t everyone have a favorite logo? No, just me? OK. Anyway, the opposite crown controls the world time function. Flip the Celestial Voyager over, and the stunning caliber within eagerly greets the viewer. 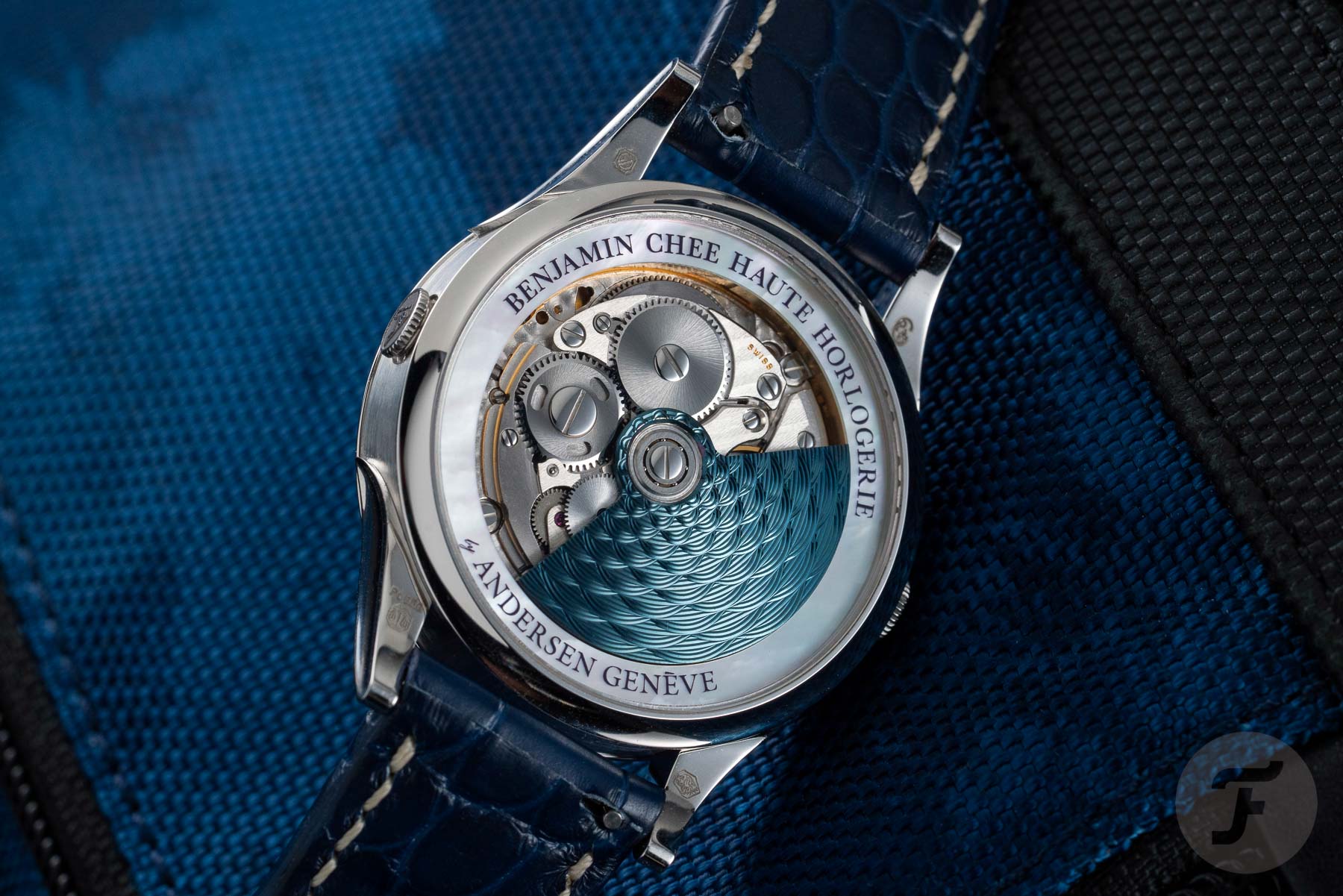 Andersen Genève’s talented watchmakers painstakingly hand-finished every part of the movement, with special polishing of the wheels, screws, and even teeth of the ratchet wheel. Delicate anglage and Geneva Stripes add the final flourish to the Celestial Voyager’s stunning caliber. The ratchet and crown wheels are completely hand chamfered, mirror polished, and all visible surfaces of the wheels are snailed and circular grained. The wheels of the self-winding mechanism are rhodium plated and snailed. The watchmakers even polished and refined the screws and the plate of the self-winding mechanism and pawl as well. 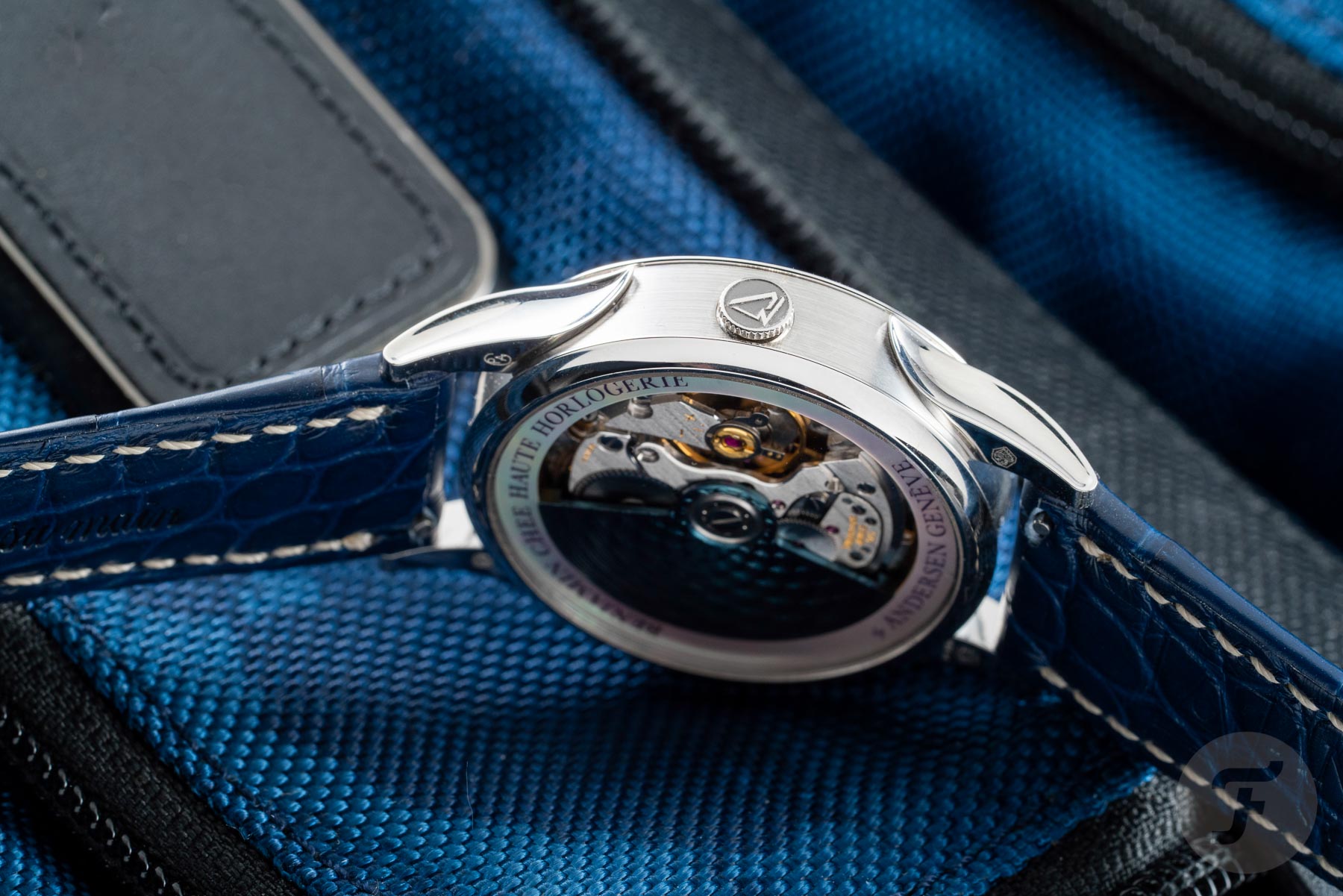 A movement of this caliber (no pun intended) deserves the very best. Thankfully, Andersen Genève’s watchmakers have indeed treated it like horological royalty. The BlueGold rotor is the brand’s signature facet to an already beautiful movement. To produce it, watchmakers heat treat gold in an oven, which gradually causes it to turn blue. The process is similar to heat bluing other metals but on a grander scale. Due to the organic nature of this process, no two rotors bear the exact same hue. The traditional engine-turned guilloché further adds to the artisanal craftsmanship bestowed upon the Celestial Voyager. 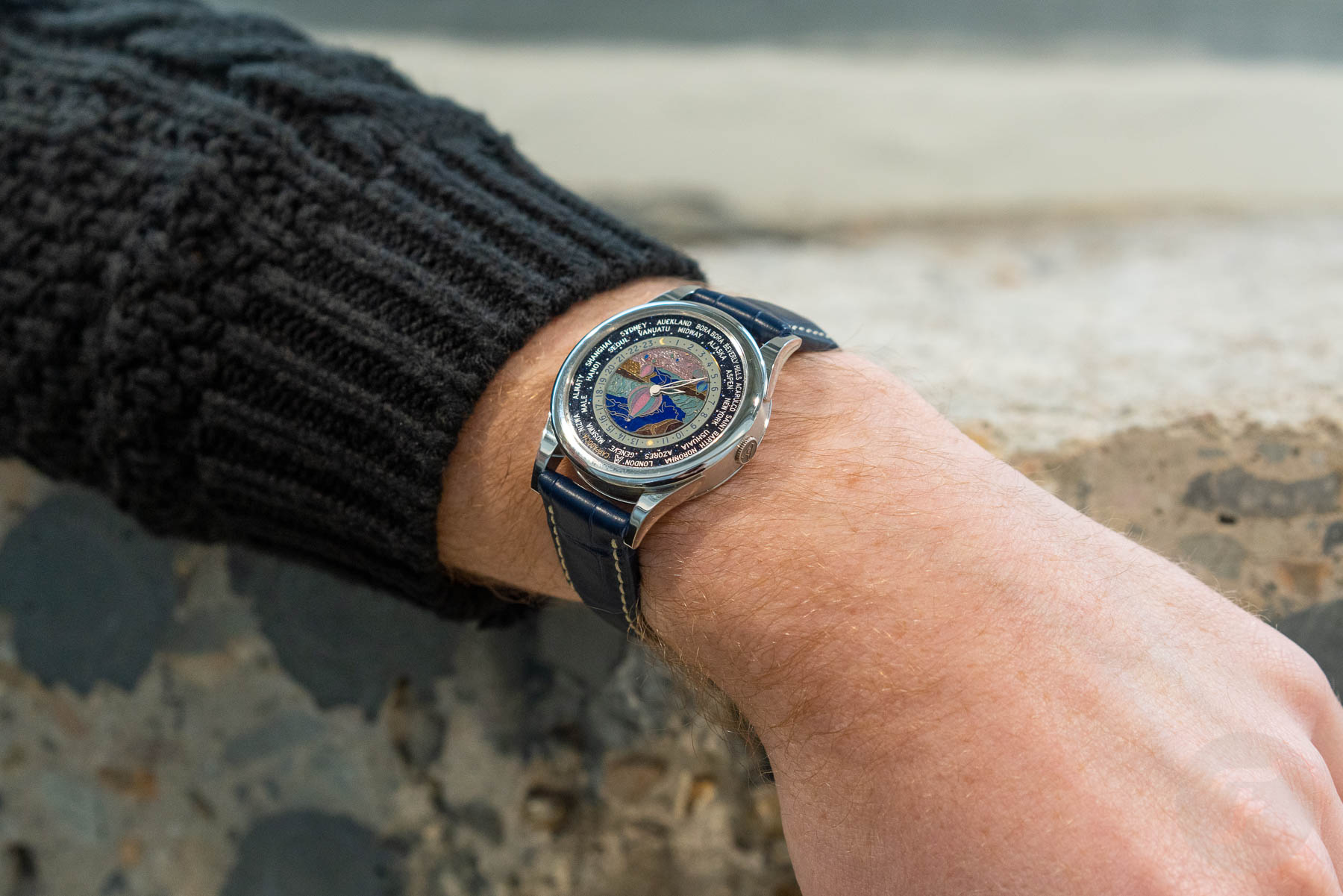 The Celestial Voyager is a modern-day feat of watchmaking craftsmanship

I am very fortunate to experience a wide array of different watches from various brands. However, it’s not often that I have the chance to experience this level of haute horology. While you can often “see” the passion of a watchmaker through their craft, with the Andersen Genève Celestial Voyager Sunset Over Cappadocia, you can literally feel it. I appreciate that it may be tough to understand how one “feels” another’s passion, as it’s not something that is usually described in a tactile sense. But feeling is believing! If you ever have the chance to experience one of these watches up close and personal, I urge you to grab that chance with both hands. 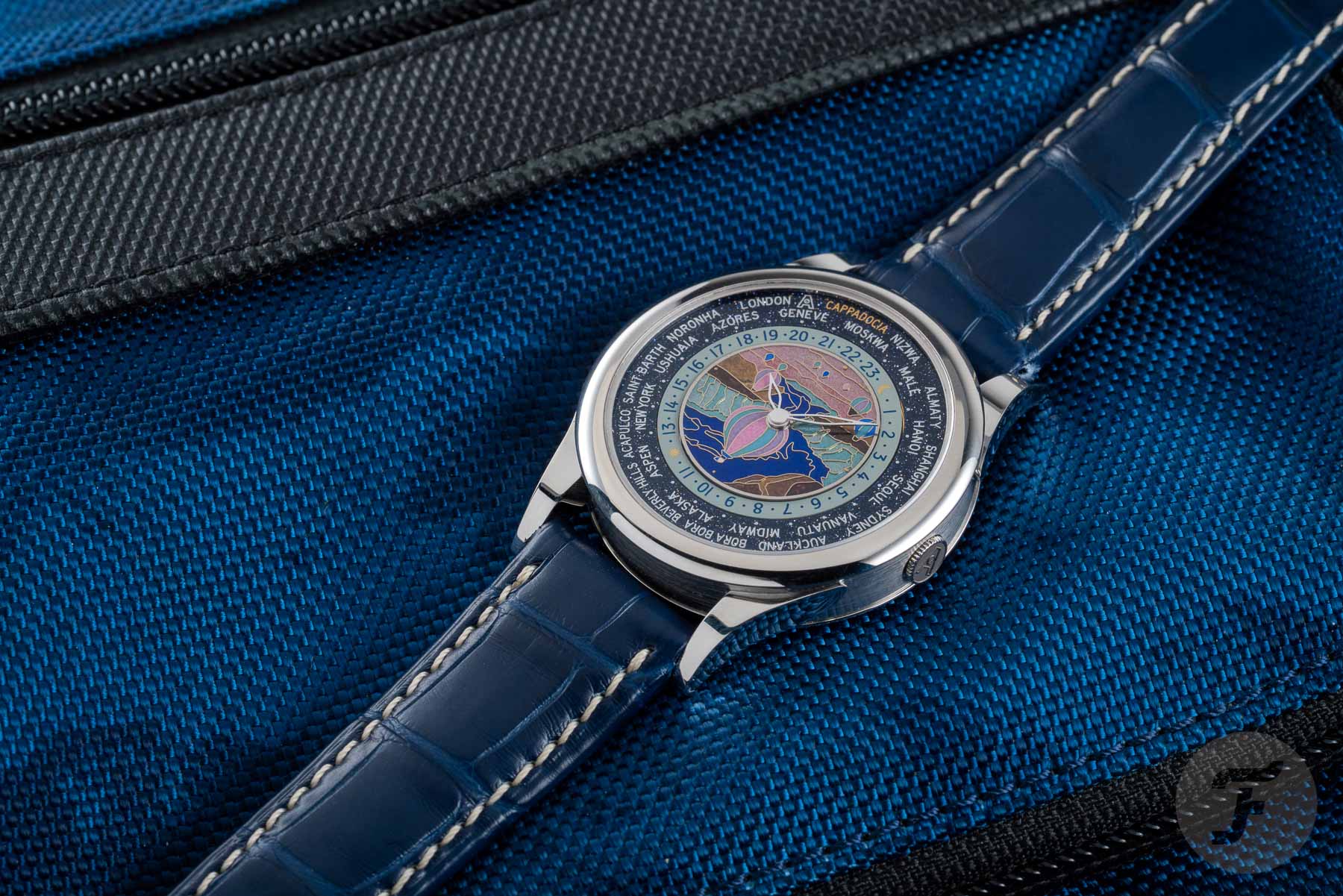 Andersen Genève produced the Celestial Voyager for BCHH in a limited pre-series of seven pieces, and each of the seven has a unique dial. The brand produced the Sunset over Cappadocia dial for the prestigious Grand Prix d’Horlogerie de Genève Awards (GPHG) in 2021. Please visit the Andersen Genève website or the BCHH website for more information.