After spending almost a decade at Patek Philippe’s “Atelier des grandes complications”, the venerable Svend Andersen started his own Genevan atelier in 1980. Ten years later, already renowned for his craft and artistry in the Haute Horlogerie circle, Andersen created his first world timer entirely in-house. Ever since then, world time watches have become Andersen Genève’s house specialty. In 2015, the Tempus Terrae was unveiled as the fifth edition of the world time series with a brand-new design and a further-enhanced grand complication.

Now, two new iterations in white gold with gem-set bezels are being added to the line-up. We had the privilege of a sneak preview of the GPHG-nominated Tempus Terrae with an aquamarine-baguette bezel. Let’s take a closer look. 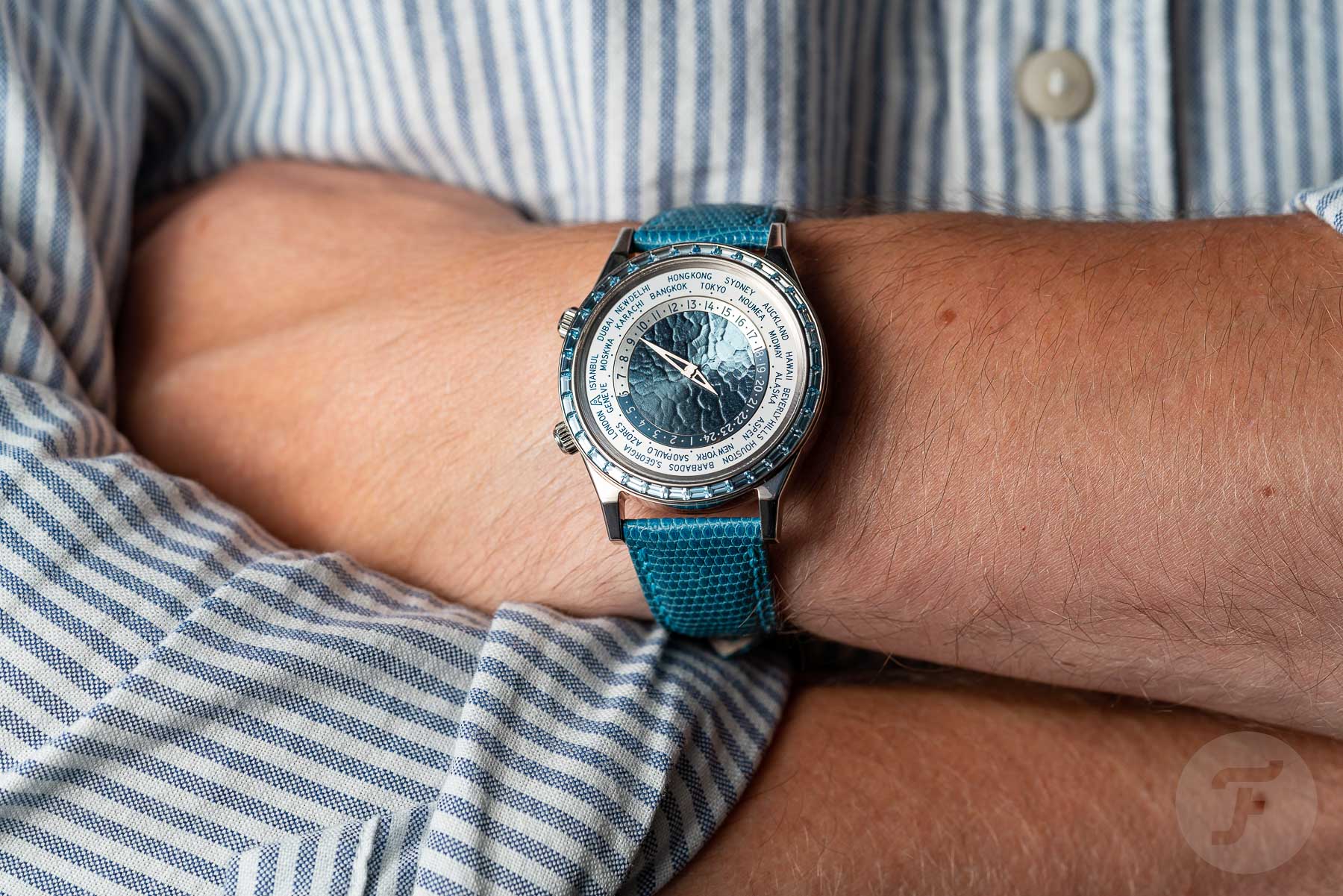 Svend Andersen is Danish. I had the honor of being involved in a project with the maestro during my first years in the watchmaking business. His reputation preceded him as one half of the founding duo of AHCI (Académie Horlogère des Créateurs Indépendants). Established in 1985, AHCI has been cultivating independent watchmaking and counted the likes of Kari Voutilainen, François-Paul Journe, as well as the late George Daniels as members. 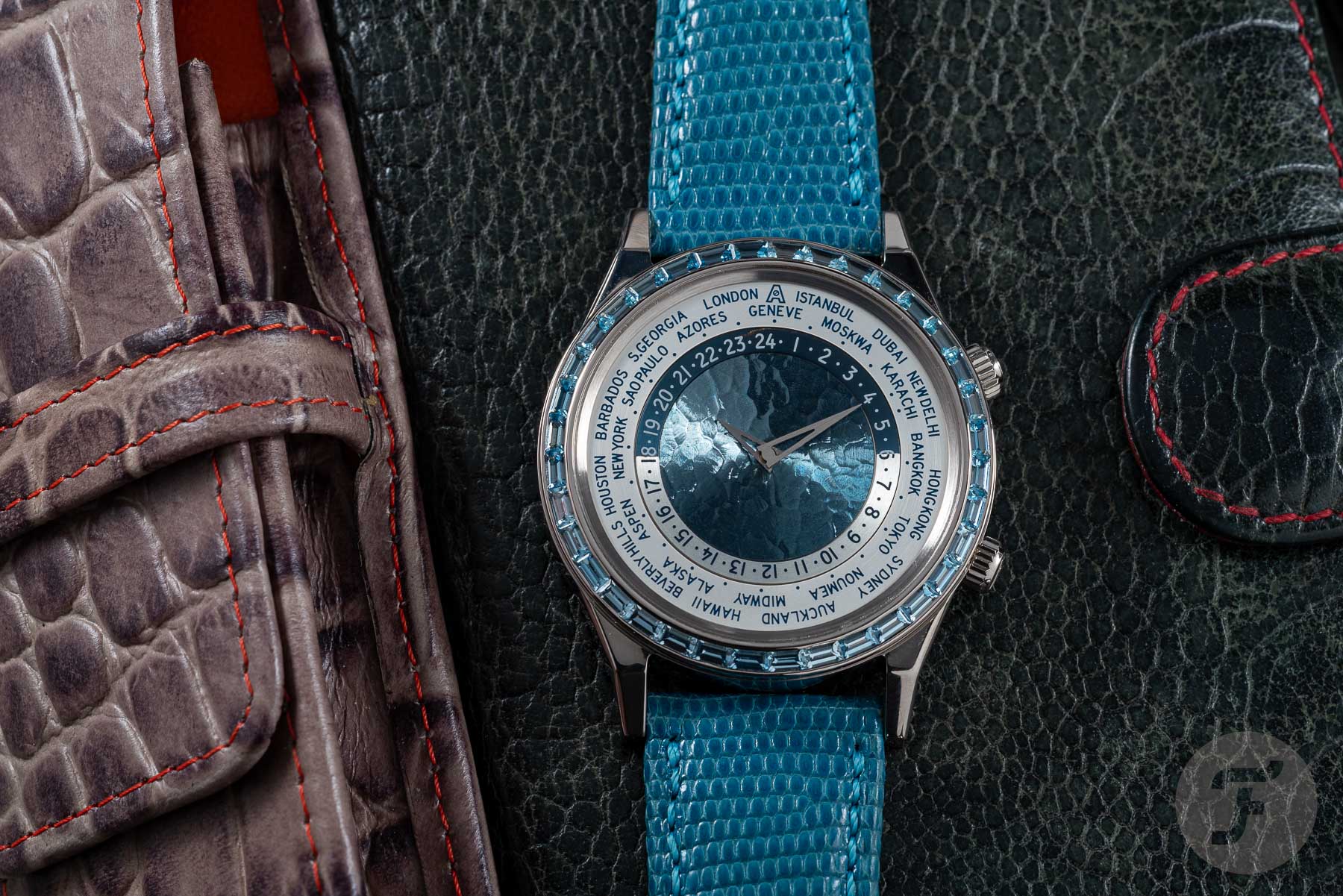 Andersen Genève naturally has been a hotbed for horological talents. Felix Baumgartner of URWERK as well as Franck Muller himself worked for the atelier before they found fame. In 2015, Pierre-Alexandre Aeschlimann took on the mantle of the atelier while Andersen continued with his creative input for new models. It was then that the new Tempus Terrae was conceived in homage to the first wrist-worn world timer ever donning two crowns, developed by the gifted Louis Cottier in 1950. The influence in the style is evident, including the distinctive angular lugs.

Unlike Cottier’s design, the Tempus Terrae boasts an in-house-devised automatic movement to operate both crowns on the right flank. The one at 2 o’clock engraved with “TT” on a globe is for adjusting the city disc. The one at 4 o’clock with the brand’s logo is for winding and setting the watch. This latest Tempus Terrae in aquamarine blue comes in a 39mm faceted white gold case. It has a svelte profile measuring only 9mm in height. The case is sumptuously polished, brushed, and beveled by hand. I love these boxy and angular lines which exude a refined vintage feel. This particular version is characterized by the bezel adorned with 36 alluring blue baguette-cut diamonds, weighing a total of 2.25ct. 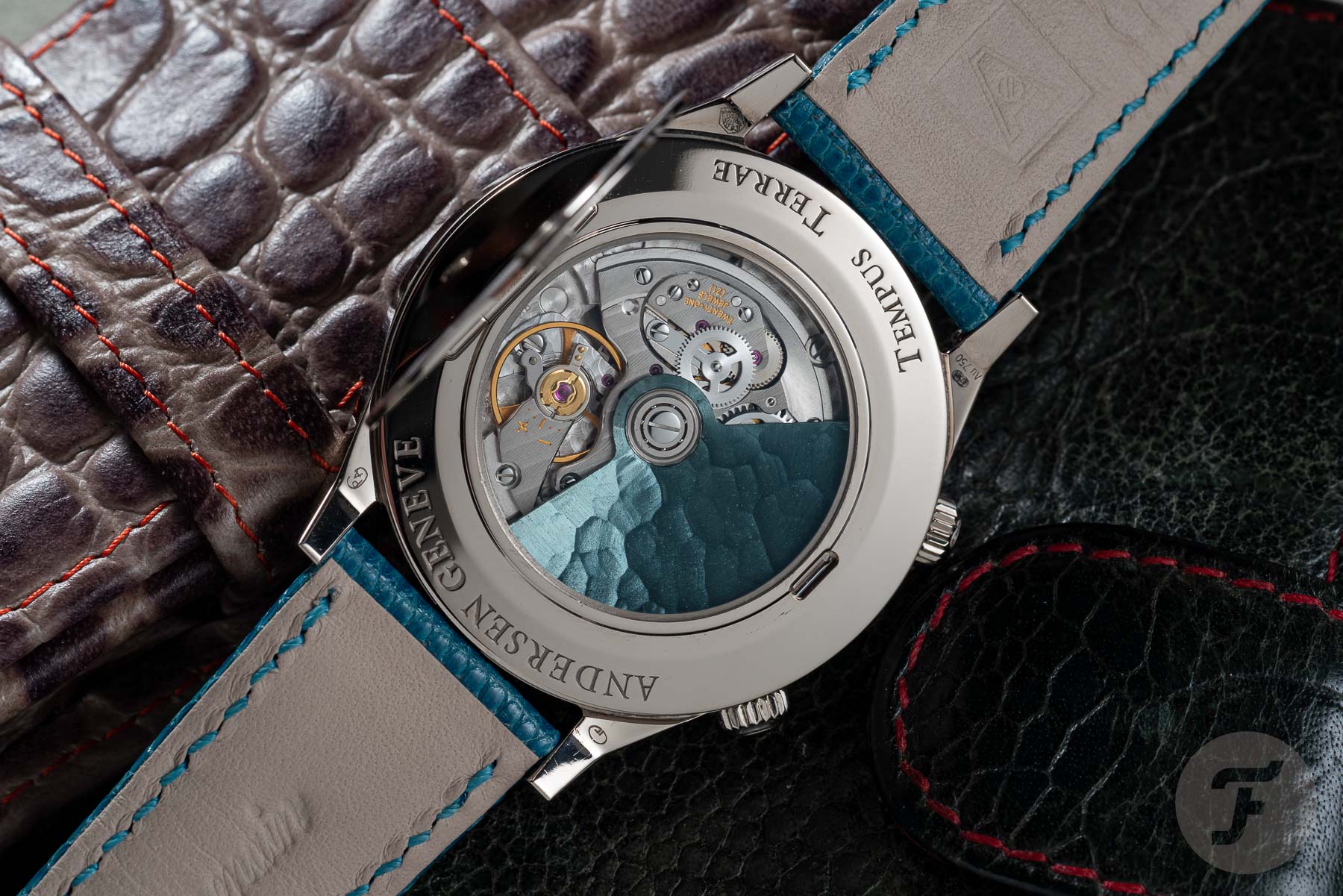 The same aquamarine tone permeates through the dial markings and the strap to the “BlueGold” central dial and rotor. Andresen Genève has concocted this proprietary 21K BlueGold by mixing 24K gold with iron elements and then heating it in an oven to produce a gleaming lagoon blue. We have seen the use of BlueGold in previous Tempus Terrae models, as well as the rotor of the Celestial Voyager model that Dave reviewed. The beauty of this alchemy is not just the color, but also the fact that no two pieces come out in the exact same shades. To top it off, each piece has a wave-like hand-engraved guilloché pattern. Therefore, each Tempus Terrae Aquamarine is essentially a one-off with its unique dial and rotor. 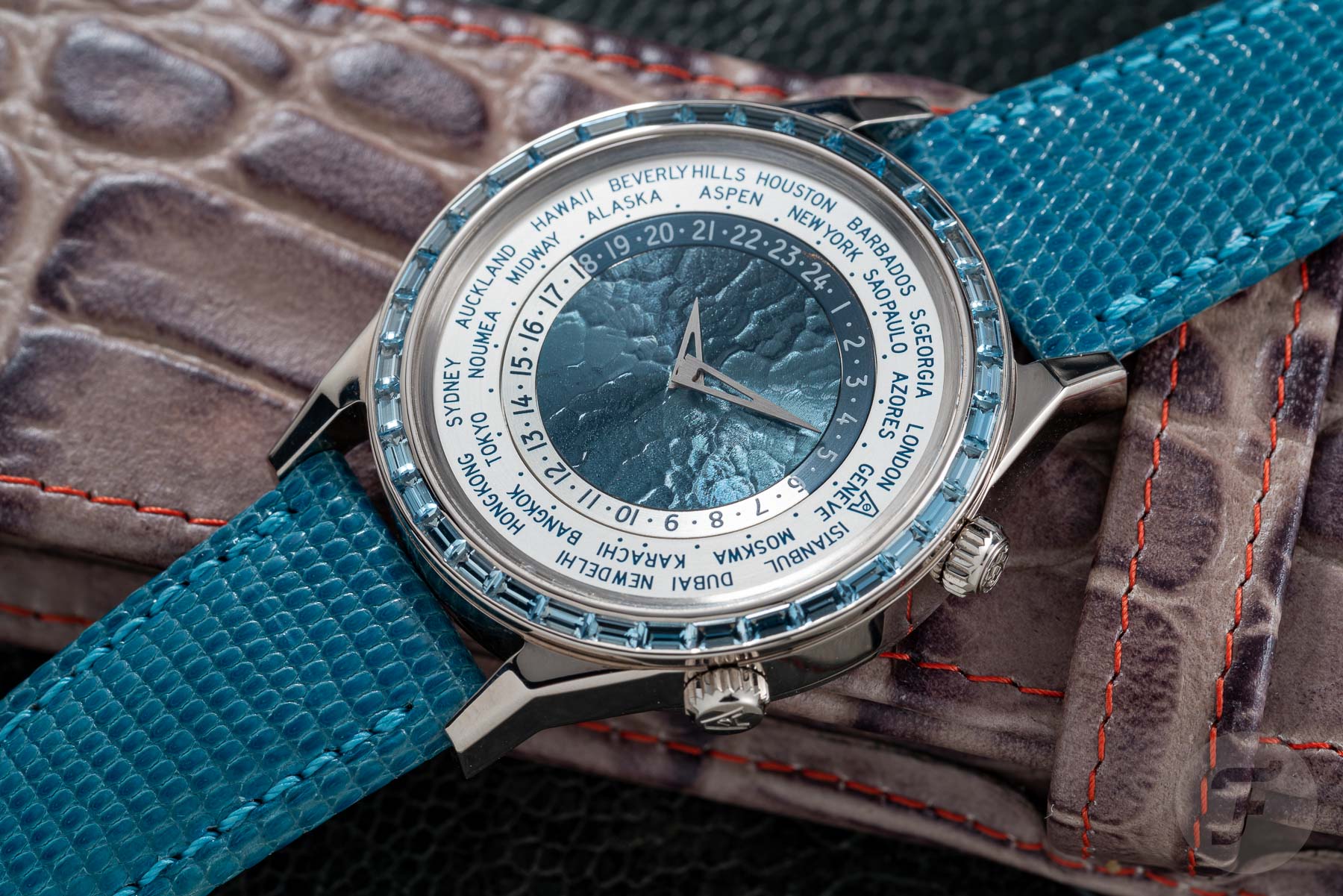 Compared to the mesmerizing dial and dazzling bezel, the hands may be a small detail. But to me, they are one small detail that makes a huge difference. This pair of finely brushed cut-out delta hands may just be the best handset I have seen. Generally, I care very little about hands because they are usually either too generic or too fancy. These geometric hands, however, balance perfectly with the detailed dial and complement the faceted case.

Turning over the watch, the hunter case back opens up to reveal the mechanical wonders inside. According to Andersen Genève, the in-house world time module is fine-tuned and optimized for the new Tempus Terrae. The Swiss-made movement oscillates at 21,600vph (3Hz) and provides a power reserve of 40 hours. It would blow your mind to know the meticulous crafting of every millimeter of this caliber. It involves delicate chamfering, hand-finishing, and elaborate decoration on the smallest of components. Even the tiniest wheels and visible screws are polished to a flawless finish. Each component is also individually cleaned and quality-checked before incorporating into the mechanism. 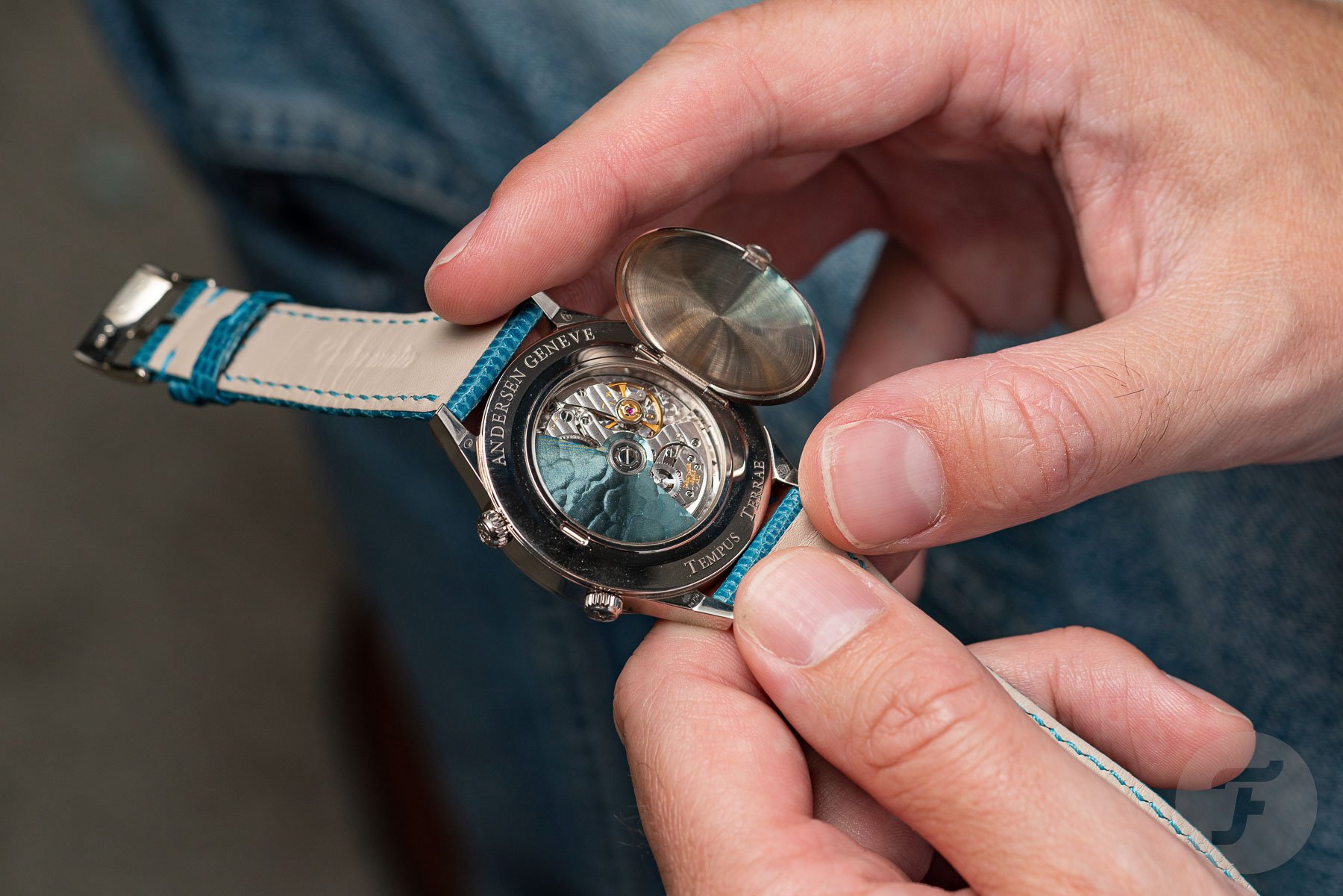 We often read comments questioning why the same movement in different watches can vary so much in price. Here is one of the reasons. On top of the materials, all this exhaustive artisanal work is what causes the price of a movement to skyrocket. This is fine watchmaking at its best for the appreciation of connoisseurs. The Tempus Terrae with aquamarine baguette bezel is available by special order only at a price of CHF 67,500. Apart from this aquamarine version, there is also a blue sapphire version (CHF 74,000). Patrons will have the option of hand engraving inside or outside the back cover of the case.

Hot Topics
Introducing: The Omega Speedmaster Super Racing With Spirate System
149 comments
Design Vs. Specs — Which Is More Important To You When Buying A Watch?
85 comments
The Updated Bracelet For The Omega Speedmaster Professional 3861 — Here Is What’s New!
51 comments
The Time To Buy Is Now: How The Current Economic Climate Influences Watch Buying And How You Should React
49 comments
Introducing: The New Cartier Tank Française
49 comments
Popular
(From The Archives) Shut Up & Read The Truth About Cartier Watches
George Cramer
21
New Hamilton Intra-Matic Auto Chrono – An Introduction (with live pictures)
Balazs Ferenczi
13
The Omega Seamaster Diver 300M Returns – On The Wrist Of Daniel Craig
Paul Dezentjé
17