Following my review of the Phillips watch auctions last week, my brother (Roy) and I took a look at Christie’s upcoming auction catalog and had the pleasure of viewing the watches with Thomas Perrazi in Geneva. Thomas and the team have focused on vintage versus modern in recent auctions following a global trend from collectors. In regards to the team, we also had the pleasure of seeing Marie Stauffer at Christie’s as she has just moved over from Sotheby’s (part of a pretty common game of musical chairs among auction houses). Along with Sabine, Marcello and Richard, the Christie’s Geneva watch department team is solid and has put together a great catalog with a large variety of brands and models. On a side note, we learned about the new Christie’s watch department policy that lots estimated under 10’000 Swiss Francs are automatically without reserve as of 2016. Just in case anyone was wondering why all those lots are in red.

The Christie’s watch auction, which takes place on Monday May 16th in Geneva, is comprised of 276 lots. This is an ideal size for a catalog as it keeps the balance between the high-end ‘record setters’ and the more democratic pieces that we could actually imagine on our wrists. Out of the 276 lots, there are 70 Rolexes, 47 Patek Philippe and 25 Omegas, so this means the other half of the catalog offers variety. Variety is great! 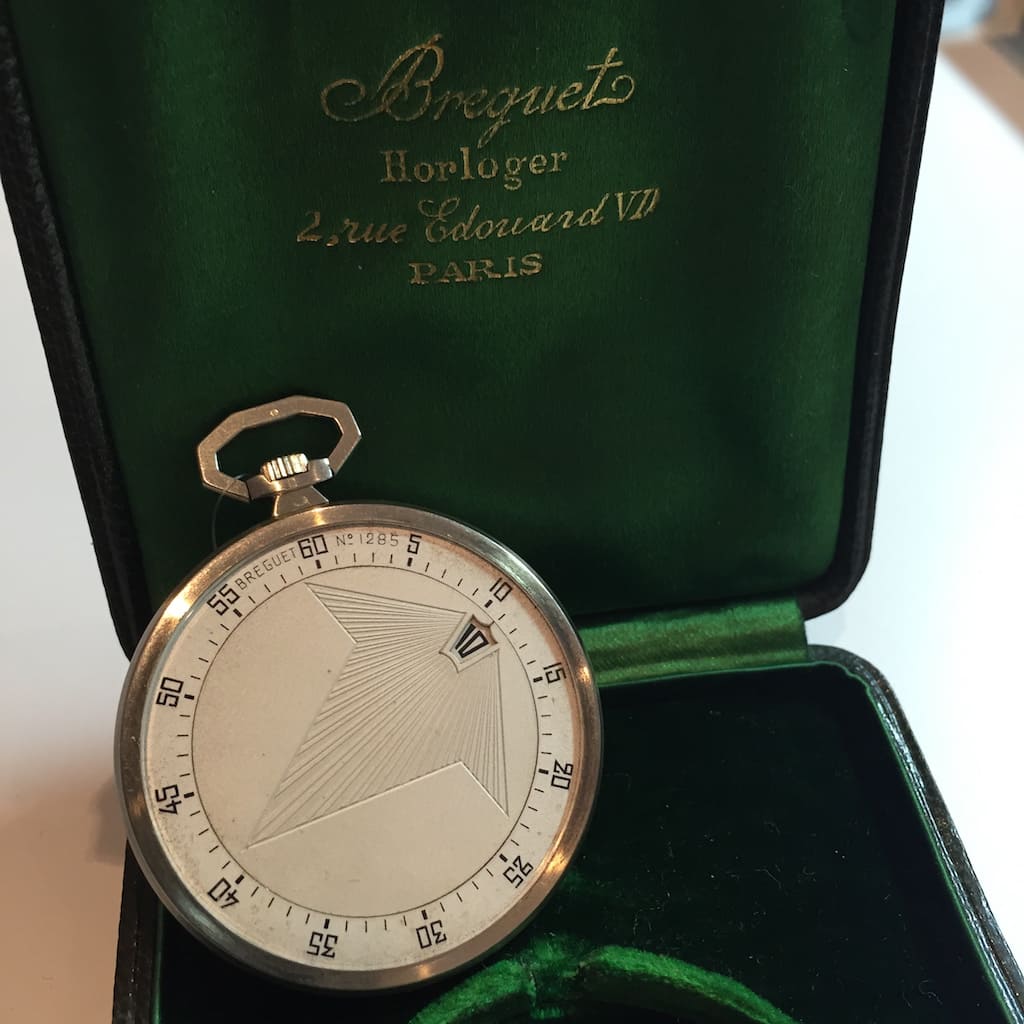 The smaller dedicated sections for brands like Piaget, Heuer, Longines, Breguet and Omega Speedmasters are neatly organized and make browsing a pleasure. Within the catalog, there are also two major private collections as mentioned in the title of the auction. One is Breguet collection including 6 important pieces from a local private collector and the other is a Rolex sports model & Patek Philippe collection. In addition, we usually don’t focus on pocket watches, but one Breguet pocket watch, which coincidentally is not part of the private collection lots, but rather excellent timing on the seller’s part, stood out to us as particularly stunning: Lot 121, an ‘osmior’ case art deco jumping hour pocket watch with a rich provenance. Osmior is a term for an antique gold alloy containing osmium and which shares a similar aesthetic to platinum.

Here are some of the interesting wristwatches we enjoyed and decided to share: 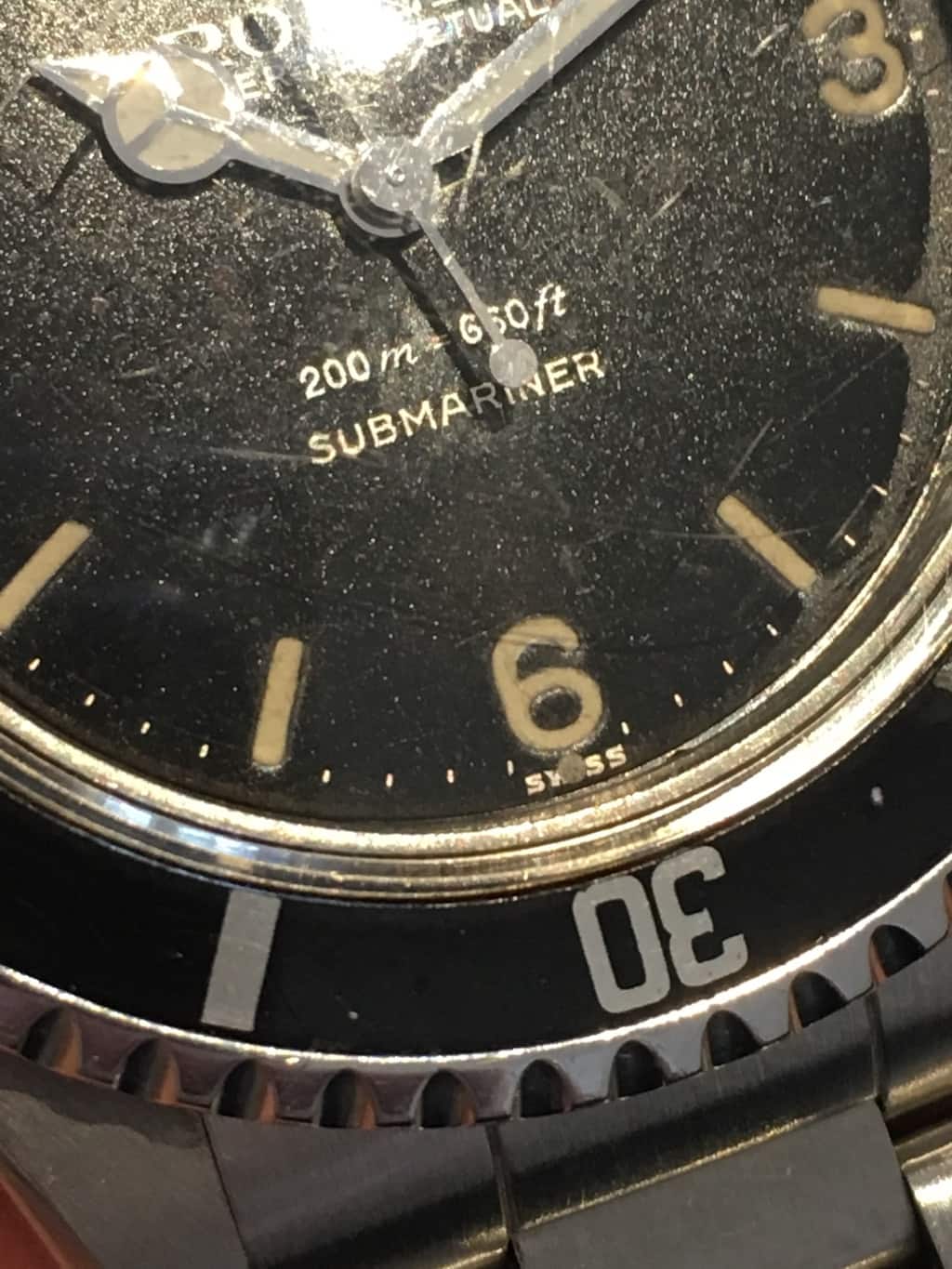 As with all brands using radium dials in the 1950’s, the AEC (Atom Energy Comission) began imposing norms for acceptable radiation levels in the early 1960’s. During the transition from radium to tritium, in 1962, Rolex dials’ luminous material was adapted with lower radiation and had an ‘exclamation mark’ lume plot to signal this change. Afterwards, dials with even lower radiation levels using only tritium were marked with an underline to signal the absence of radium in 1963-1964. Then, dials with T stamped on them replaced the old SWISS only dials entirely and no longer needed the underline. As far as a pointy crown guard 5512 with an Explorer dial is already very rare, the exclamation mark indication makes it more so. We know there are some issues with this watch, but it has been through service several times and still looks great for its age. 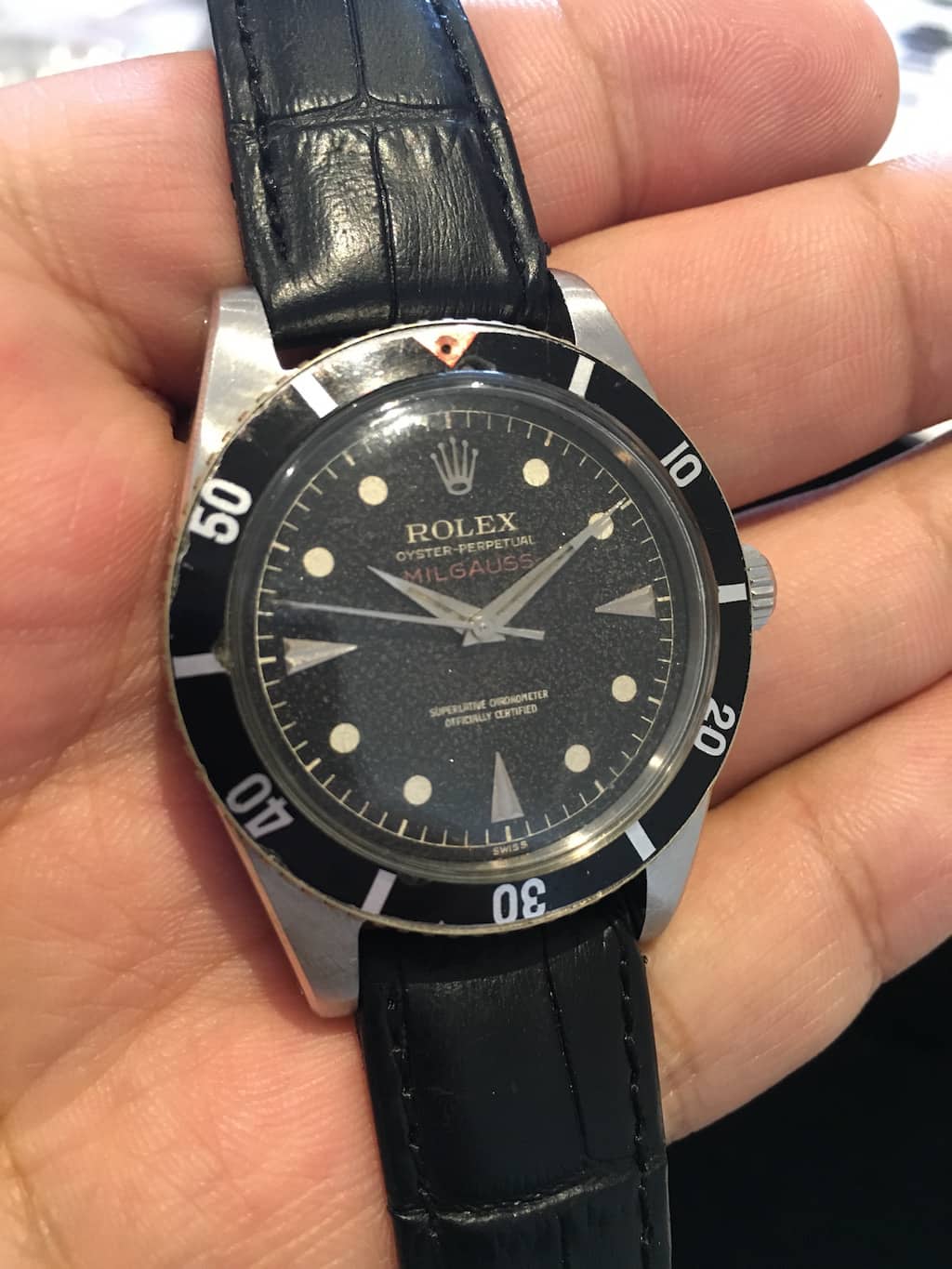 We are most familiar with the 6541 Milgauss reference from the 50’s, but this rare 6543 reference has a different case construction with an integrated anti-magnetic caseback versus the separate soft metal cover found in the 6541. Sadly, no lightning hand on this reference either. Having only seen a few of these during our time here on earth, it was a pleasant surprise to see one in this auction. Again, we can speculate on the details of the bezel and the caseback, etc., but it comes with a Rolex service invoice and we like it. 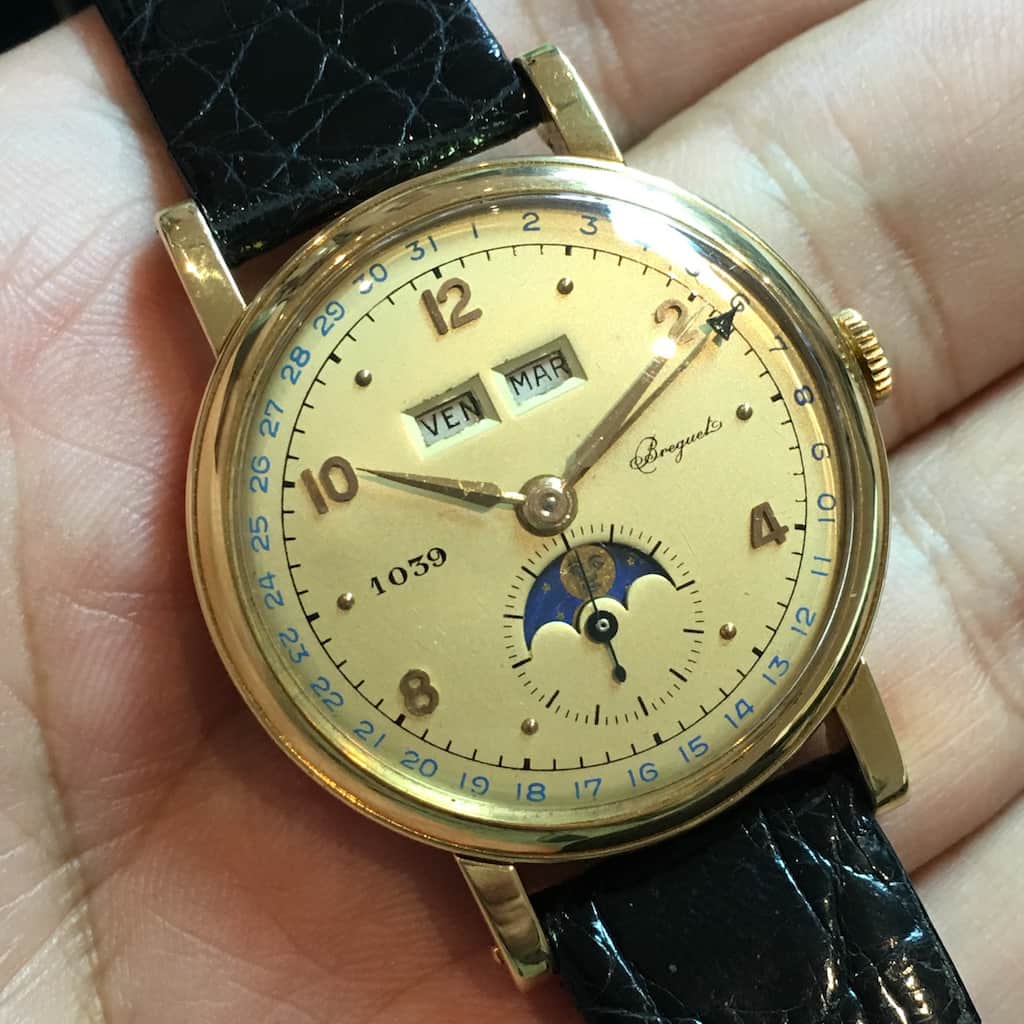 It makes sense that I have never had one of these on my wrist because, according to the records, only an estimated 5 were ever made. The condition is excellent, the triple matching number (No 1039) on the dial, case and movement is fantastic and most importantly, it is a stunning watch on the wrist. Considering the rarity of Breguet complicated wristwatches versus Patek, Vacheron and AP, we find this to be an interesting and attractive vintage wristwatch. 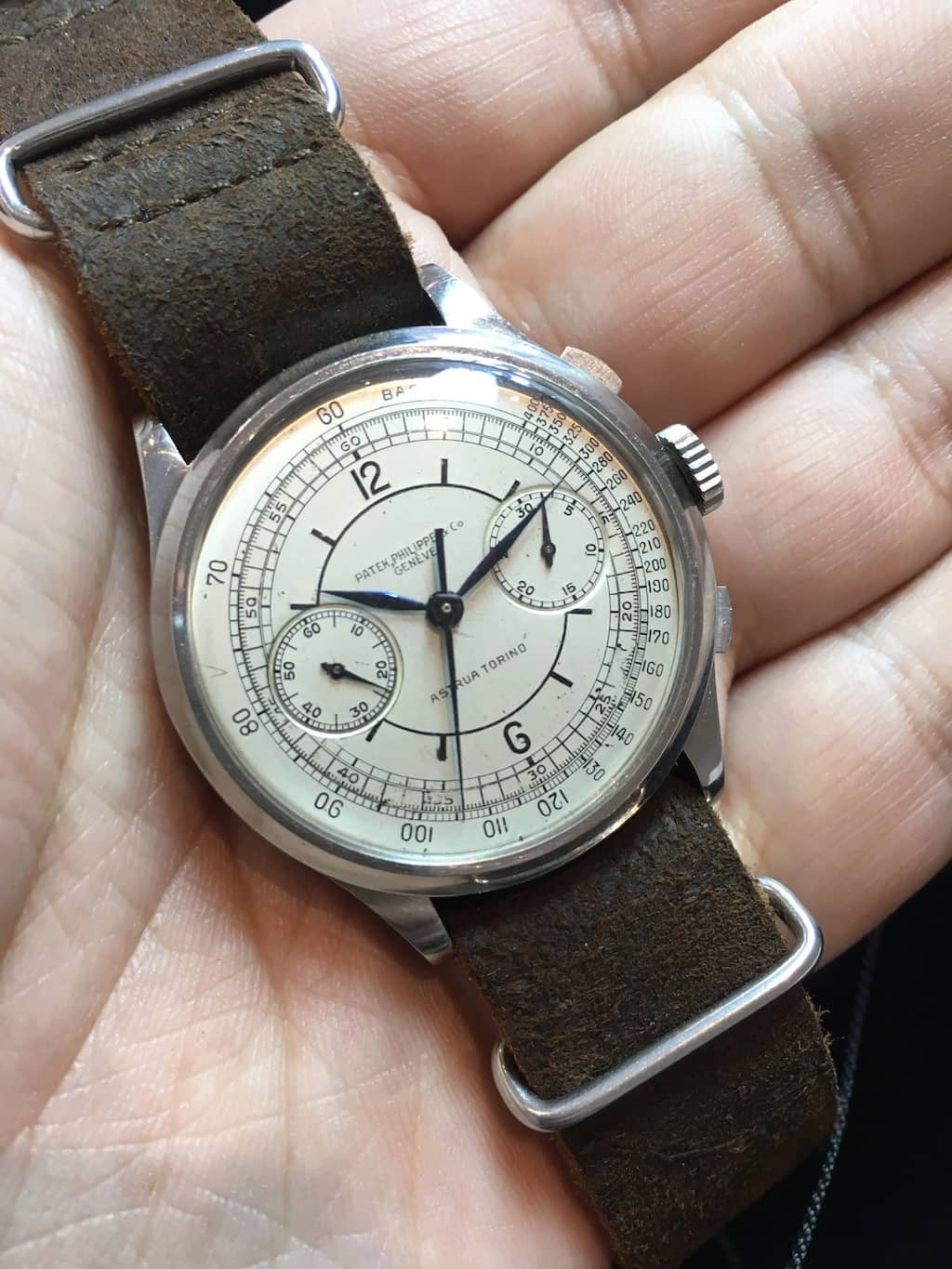 There has been a lot of chatter about this watch and especially stirred up the debate on the difference between redone and restored. So, here’s the deal: There are 10 known Patek Phillipe 530 chronographs in steel. The sector dial version, which curiously has .5mm larger case at 36.5mm, makes up only 3 of these known examples. Sadly, all three, including the one in this sale have had some work done to their dials. The first, that was last seen at Sotheby’s in 2009 had a dial entirely restored by Patek. In November 2014, at the Patek 175 sale, Christie’s auctioned one off with a redone dial that was even also damaged. The present example is the only known stainless steel 530 sector dial with a retailer signature (double signed) Astrua Torino, an Italian retailer and t is also the earliest of the three known to be produced. The question is, then, if we and every other watch expert keep saying “condition, condition, condition” why do these rare pieces seem to be exempt? They are not. If an original, pristine and untouched 530 in steel with sector dial surfaces (we presume there are a few more out there somewhere) it would likely be worth considerably more. 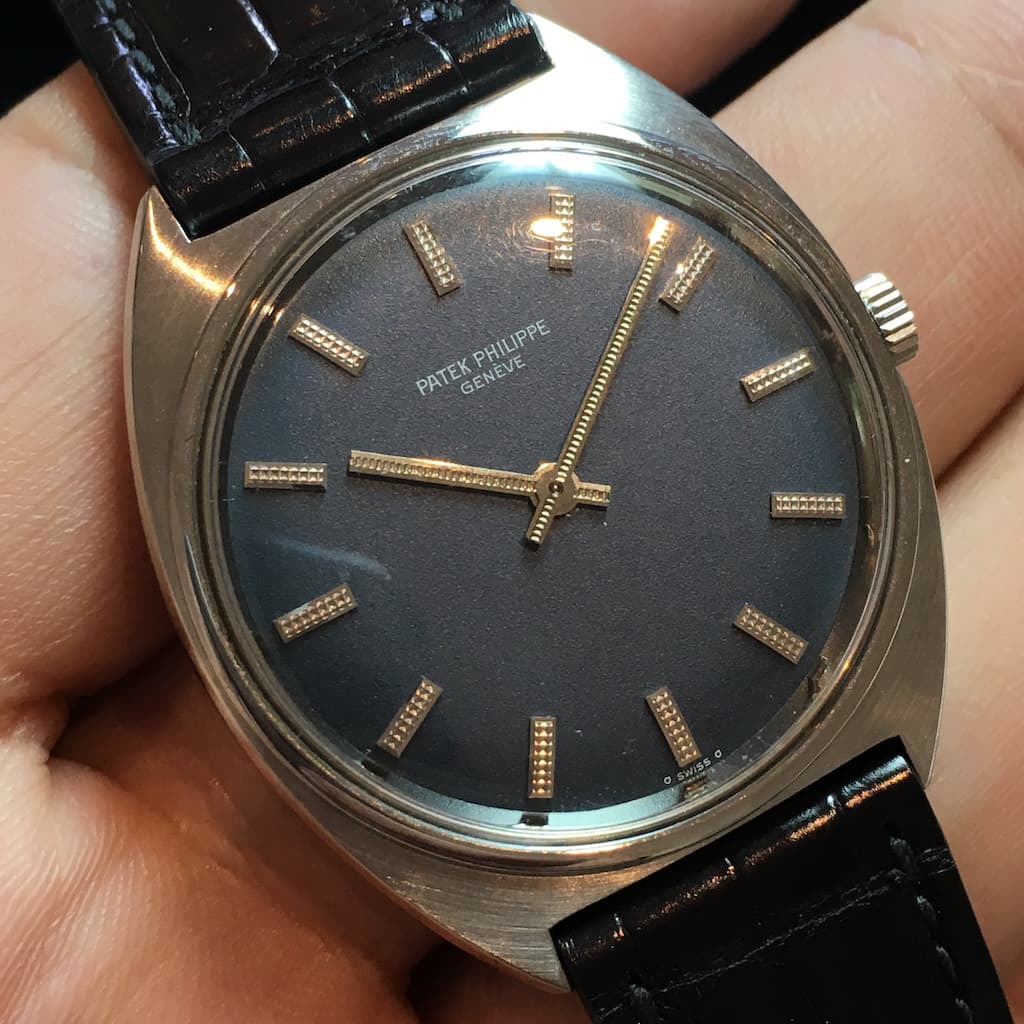 I imagine you didn’t expect this to be one of our picks, but sometimes it’s the overlooked watch that can be the most charming. This stainless steel hand-wound Patek is possibly unique with its blue dial with ‘waffle’ engraved hour markers and hand-engraved hands. They say ‘possibly unique’ as it is the only one known to date with this configuration, but maybe another one will come up during the next blue moon. The watch is accompanied by original papers from Japan and this a great package for an interesting and rare wristwatch with a relatively fair estimate. 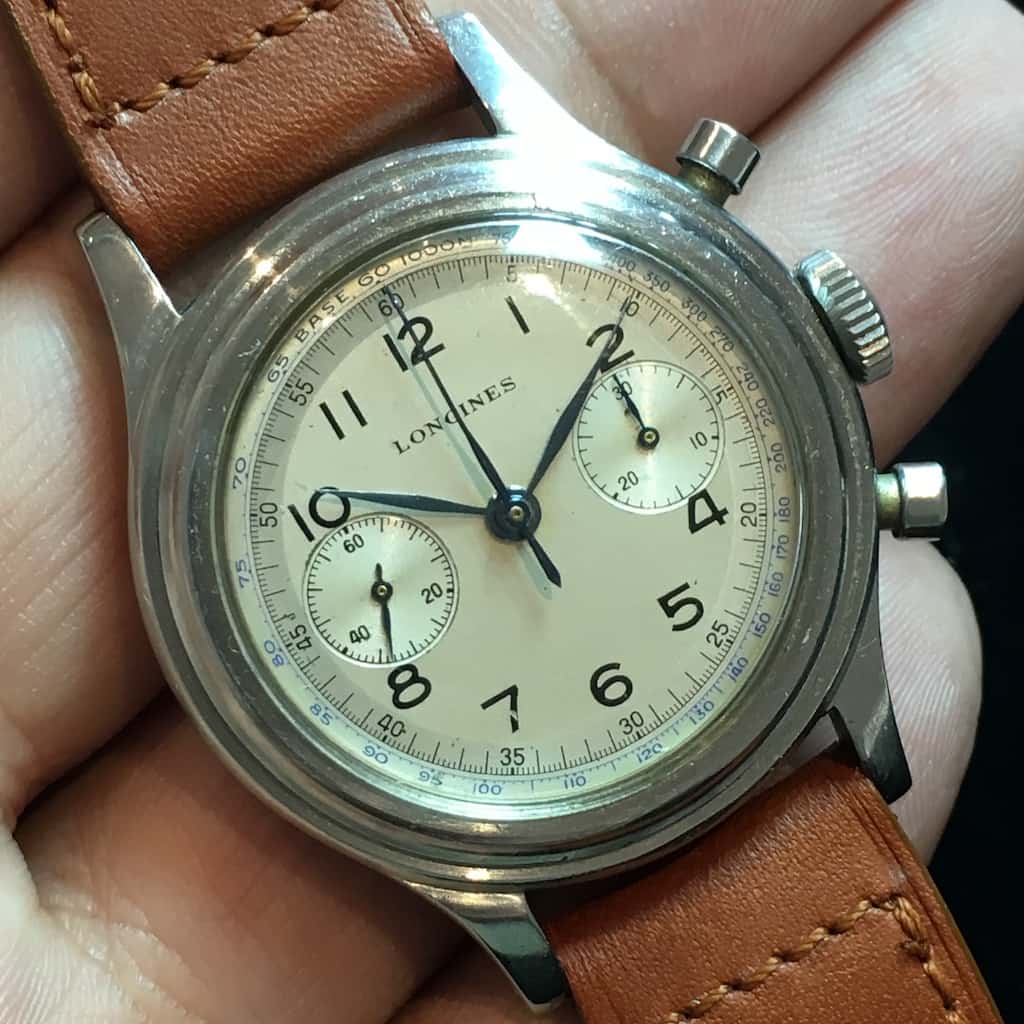 A nice 37.5mm steel Longines 13ZN flyback chronograph is becoming harder to find than one would think. Although this case has a compressor snap back and the screw down version is more sought after, the steel case, good diameter, great condition and beautiful movement are all here. Considering the time period and the quality, it is no surprise that these Longines chronographs continually go through the roof. Competition among buyers for vintage steel chronographs is getting fierce, especially Longines. 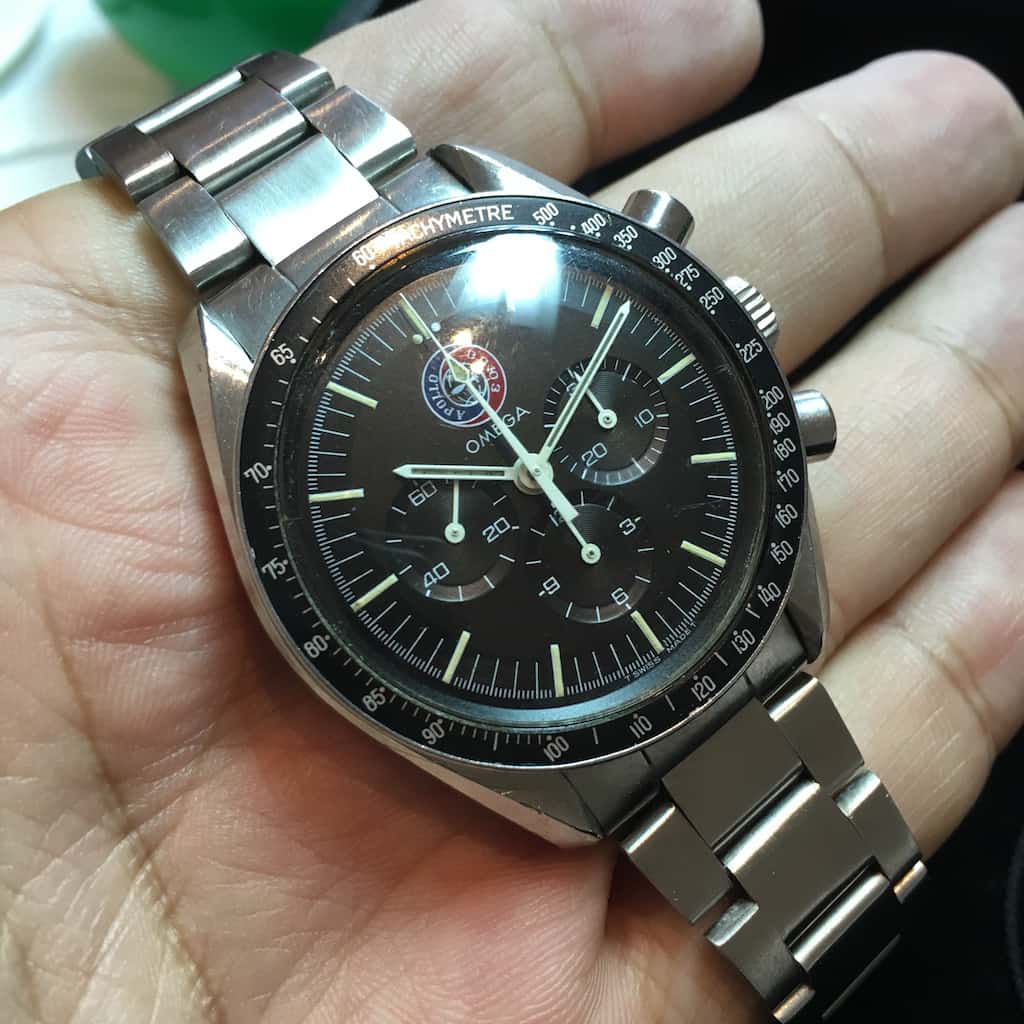 We did our best to keep our promise not to talk about Speedmasters, but promises are meant to be broken. The historic and successful docking of the Apollo & Soyuz spacecrafts in 1975 marked the end of the Space Race between rival nations. A year later, in 1976, Omega released a commemorative limited edition for this event for the Italian market. This was the first stainless steel numbered edition released by Omega and also the only one ever made that doesn’t mention Speedmaster on the dial. This limited edition has a special commemorative case back, unique wider 5.5mm pushers (instead of 5mm usually) and an Omega ‘Oyster’ style bracelet reference 1168/633. Overall, a lot interesting details make this an awesome collectible!

It is a special and rare watch and therefore, very few come up for sale, especially in original condition and quiet a few collectors are hunting for the irreplaceable 5.5mm pushers. The caseback was polished and limited number was very difficult to see, which is why its not mentioned in the catalog. My brother and I investigated with our kit of gadgets and both agreed it is number 103.

A big THANK YOU to Sacha Davidoff for contributing his thoughts on the upcoming Geneva auctions this month. We used his name in the title of his article (he didn’t do that himself) to make his mom even more proud (she complained about the credits being in a small font in the previous article).

Hot Topics
A Californian Controversy: The Origins Of The Term “California Dial” And Why It Can Mean Two Very Different Things…
49 comments
What Zenith Is Doing Wrong With Its Pilot Line And How The Brand Could Fix It
32 comments
The Best Omega Watches Of Daniel Craig’s James Bond Era — Have Your Say!
27 comments
Why The Rolex GMT-Master II 16713 “Root Beer” Is Better Than The 126711CHNR “Cough Syrup”
26 comments
Here Are The Best Grand Seiko Watches Of 2021
23 comments
Popular
Certina DS PH200M – Hands-On Review
Balazs Ferenczi
20
Hands-On With The Seiko Prospex Dawn Grey Series
Robert-Jan Broer
6
#TBT A Vintage Seiko Buyer’s Guide to Affordable Goodness
Michael Stockton
28