Hands-On With The Behrens B015 NaviGraph — A Real Space Oddity

As members of the press, when we attend major trade shows, we like to put our best foot forward when it comes to our watches. Everyone who attends likes to show off their latest and coolest watches, so it’s no surprise to see a plethora of incredible timepieces adorning the wrists of industry folks and fellow journos alike. But, as you can imagine, it takes something special to catch the attention of our colleagues and peers. This year, I chose to wear a new piece that I’d never seen out in the wild before. Indeed, I had never seen any watches by the brand before Geneva Watch Days. I am talking about the excellent NaviGraph B015 from Behrens.

“Who?” you may ask. I could forgive you for that. Behrens is not exactly a household name. But after spending quality time with this watch, it has impressed me considerably. Let me explain why. 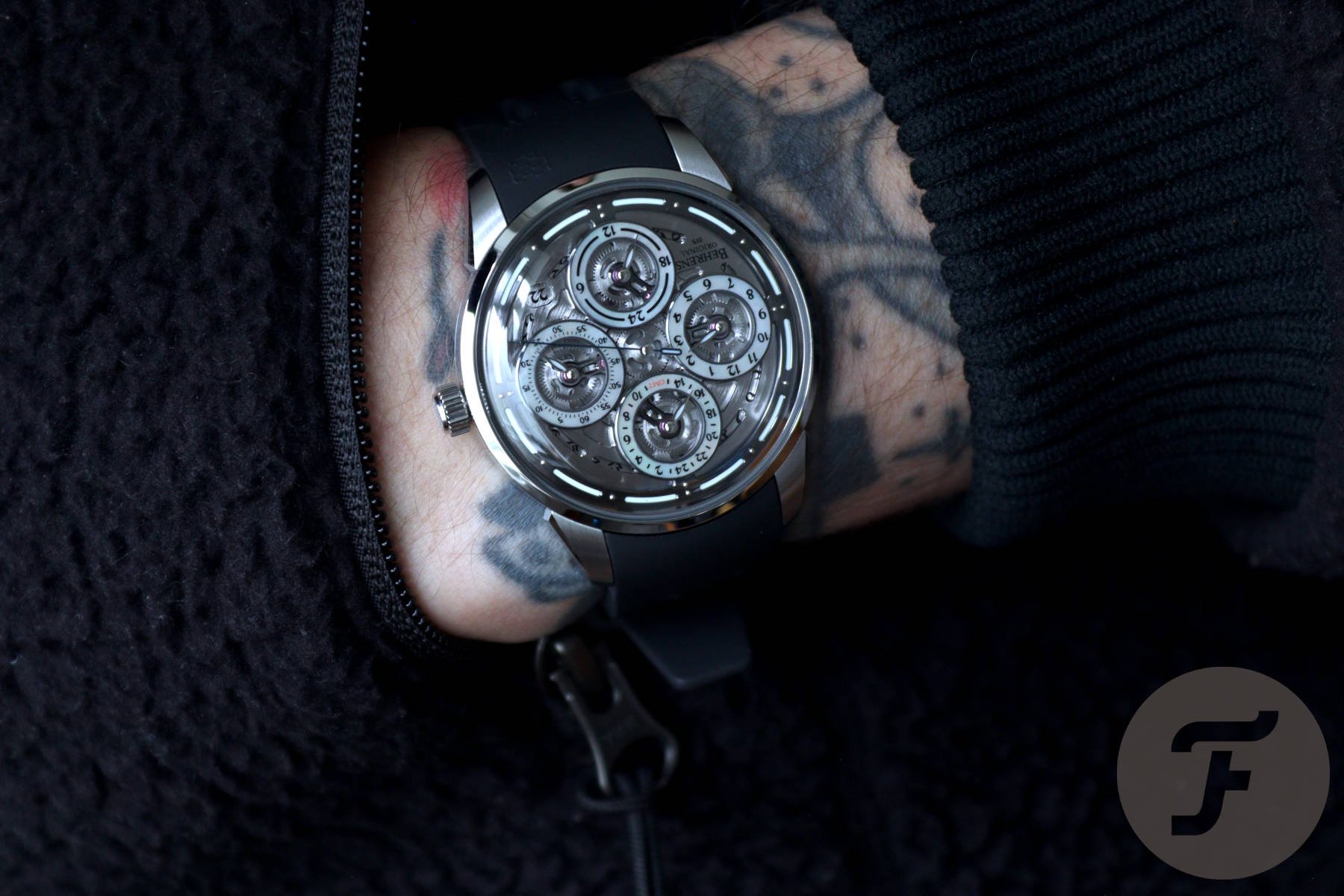 The NaviGraph got some serious attention

As mentioned, we get to see some fantastic watches at these shows. Everywhere we look, there are timepieces that could make your jaw drop. The interesting thing was that I experienced several people spot the NaviGraph on my wrist from afar and come over to ask about it. That includes people who work for some of the high-end independent brands that attended the show. Though the watches they produce cost the big, big bucks, there they were, fascinated and intrigued by the Behrens B015 NaviGraph on my wrist. And it was their jaws’ turn to drop when they heard the price of this watch too — for “just” US$2,680, you can call a NaviGraph your own. 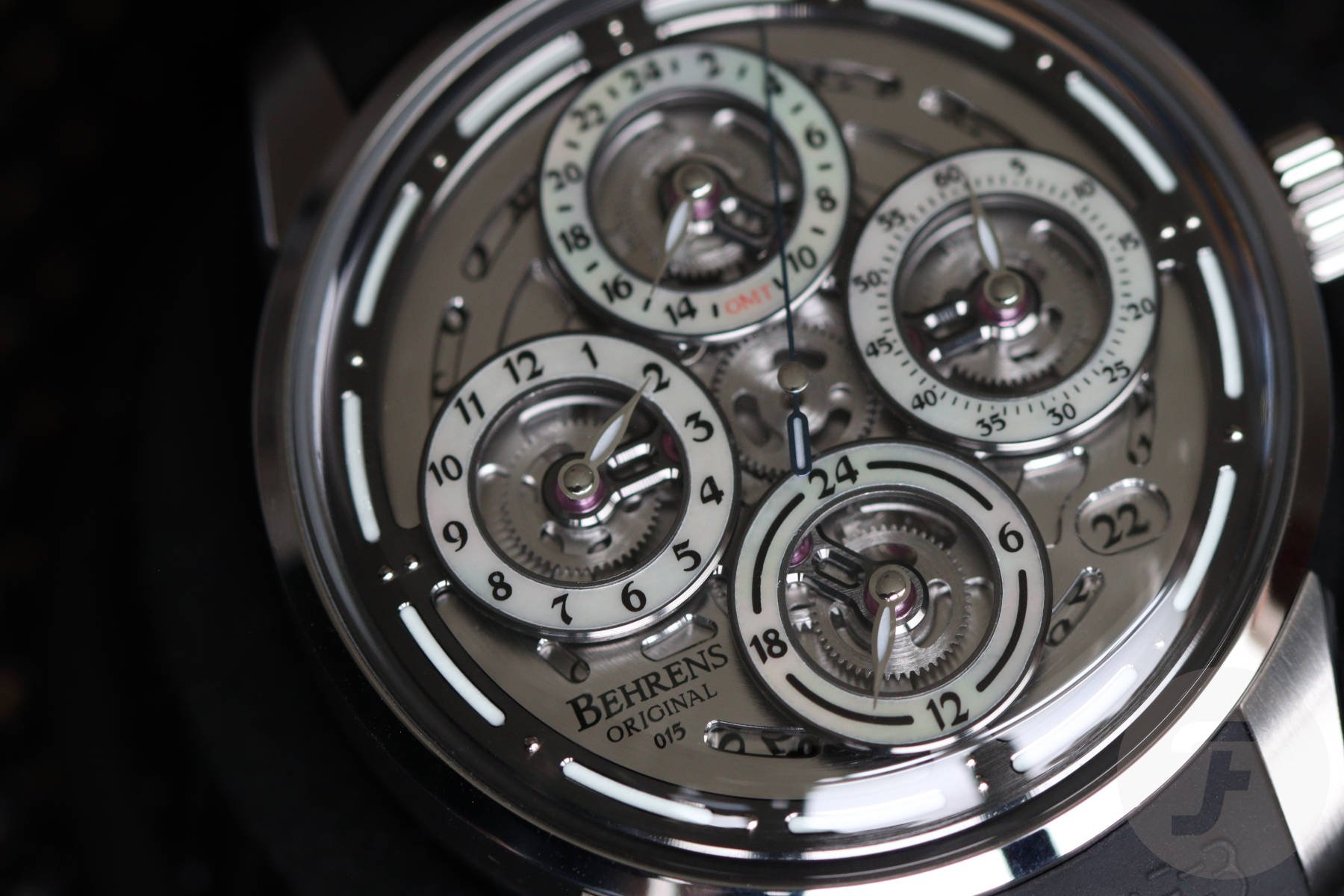 I know $2,680 is not insignificant, but the watch looks and feels far more expensive in the hand and on the wrist. Behrens seemingly focuses all of its investment on its product. This has resulted in some excellent watches but very little in the way of brand awareness. It’s a shame that Behrens isn’t better known in collector circles, but I hope this review helps change that. 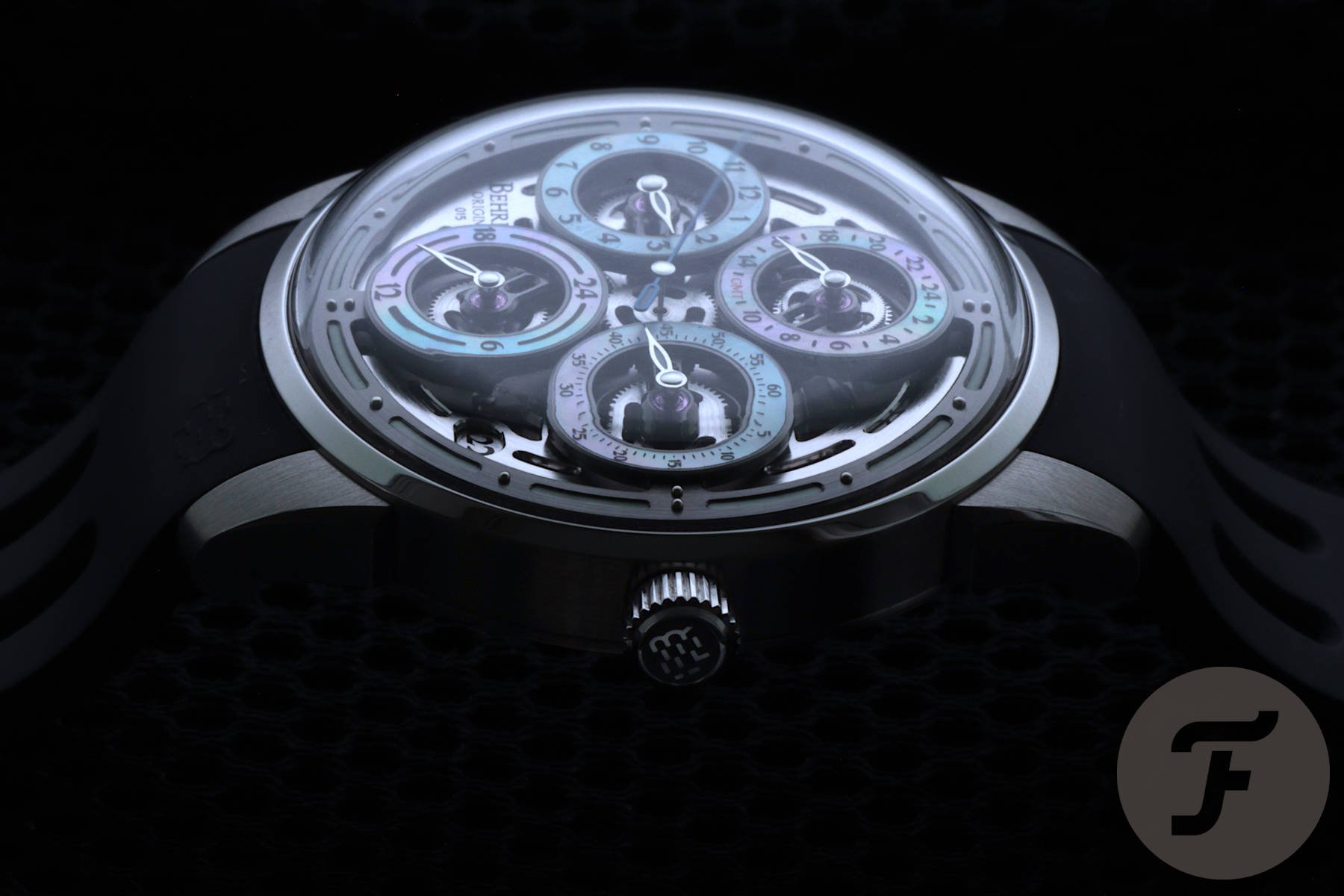 So, who is Behrens?

Behrens is an independent watch brand formed by a group of watch lovers. The name might suggest German origins (Peter Behrens was a legendary German industrial designer), but the brand calls Hong Kong home. Behrens uses its in-house production and manufacturing supply lines to focus on creating weird and wonderful designs that reinterpret how time is displayed. A glance at the brand’s website will reveal a plethora of unique concepts. While not everyone’s cup of tea, they show that this is a young brand looking to carve a place for itself in an industry that can sometimes be very focused on the traditional side of watchmaking. Though the designs can be quite polarizing, I was encouraged enough to take the plunge! Within the Fratello team, I have quite “alternative” tastes regarding watches, and Behrens certainly piqued my interest.

I mentioned that the brand’s offerings are somewhat non-traditional, so I chose to familiarize and introduce myself to Behrens with its most traditional watch, the B015 NaviGraph. This watch is one of the few that uses traditional hands to display time. In this case, the B015 uses four sub-dials and a central seconds hand. 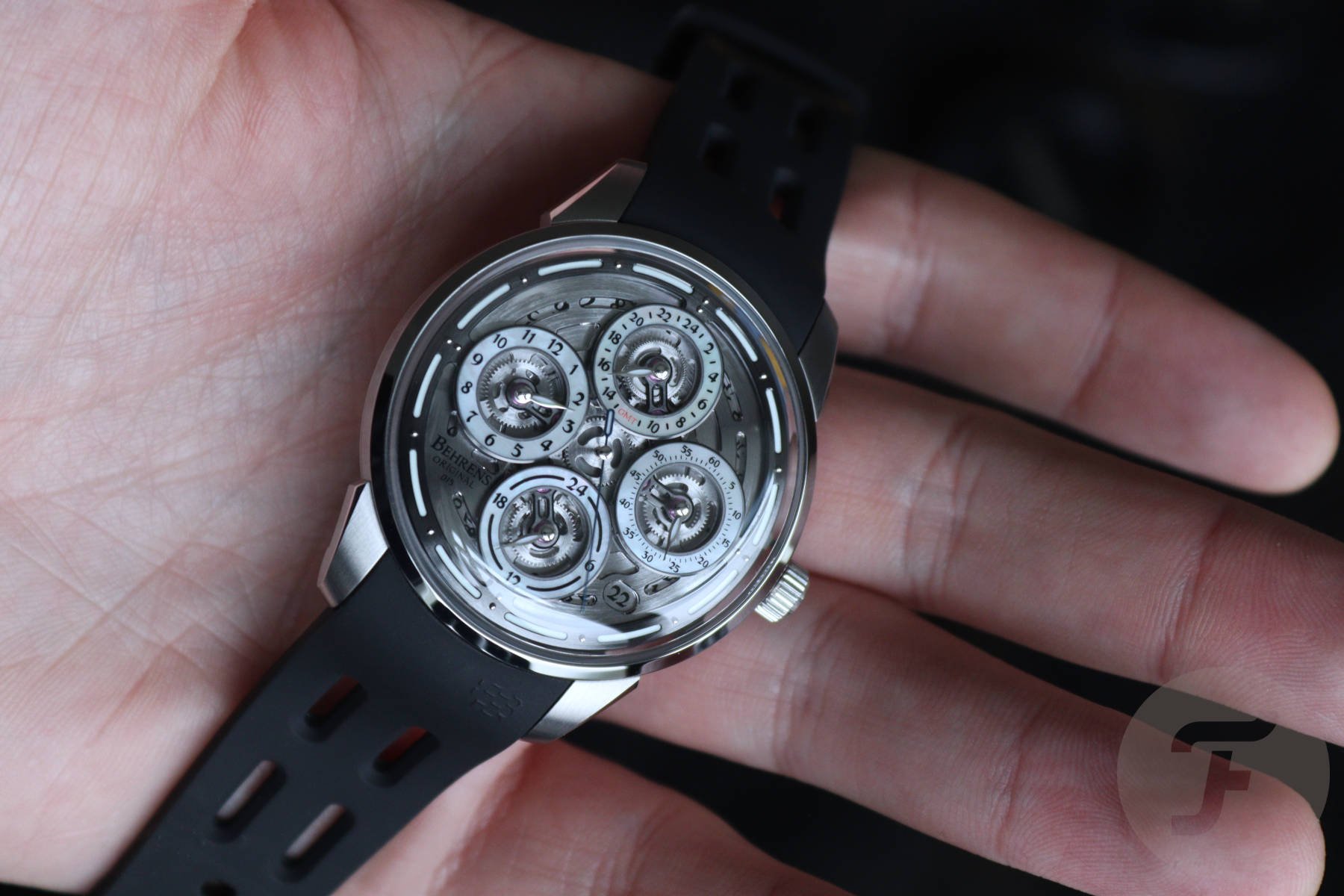 You don’t buy this watch for the unboxing…

I rarely comment on the unboxing experience when reviewing a watch. It doesn’t usually mean much to me as I only really care about the watch. I know that’s not the case for everyone, but boxes get put in a drawer or a cupboard in my house and forgotten about. The B015 NaviGraph arrived in a very generic cardboard box. It was far from spectacular, but I was sold upon opening it and holding the watch. This is more proof that you’re spending your money on the watch, not unnecessarily extravagant packaging. That’s not a bad thing per se. Would I like a nicer box? Sure! But do I want to pay more and have a fancier box? No. The watch is excellent, and the price is already great. I’m not going to knock Behrens too much here. 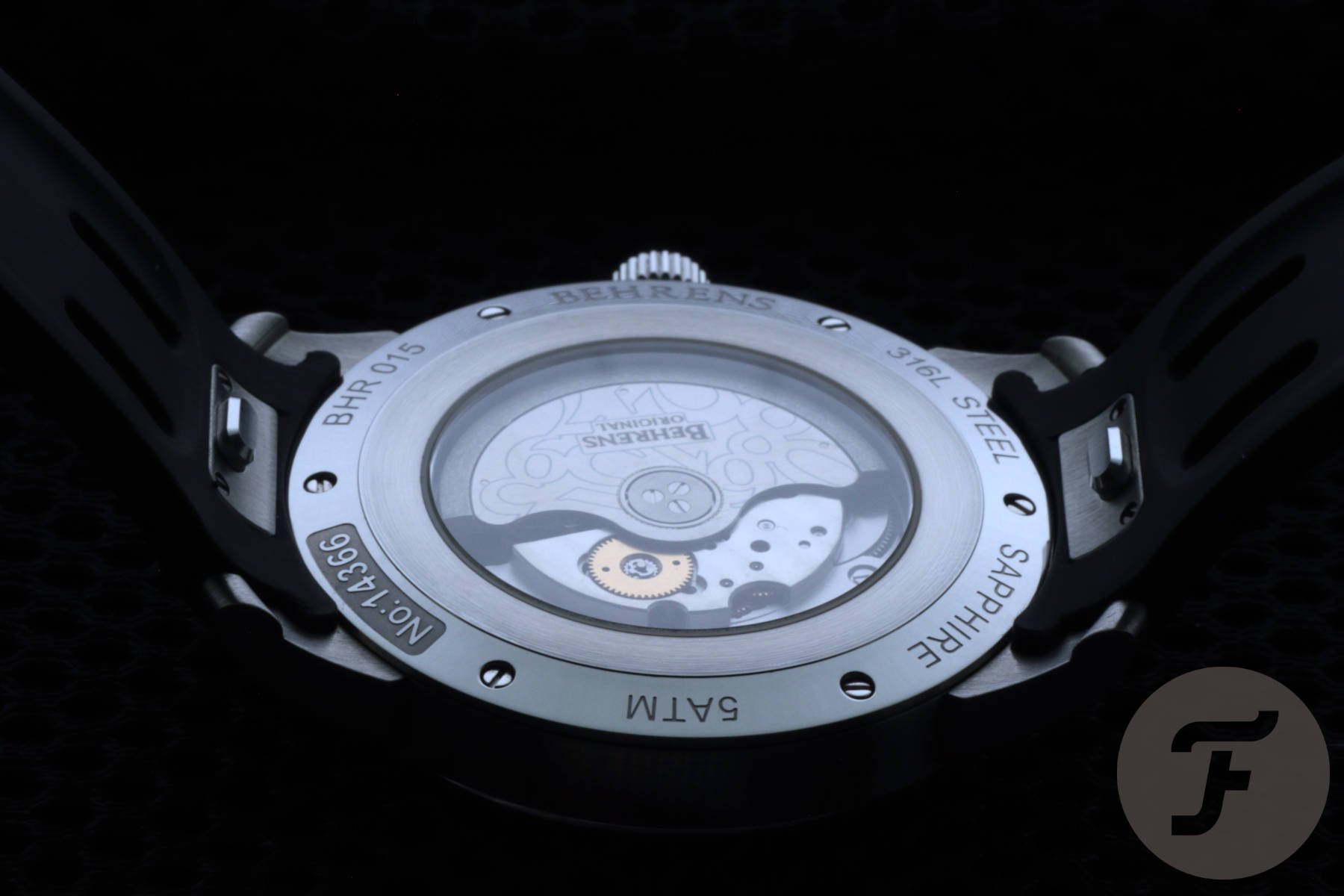 The NaviGraph is far, far more than Miyota

The movement inside the B015 NaviGraph is a Miyota 9015. I’m sure most of us are familiar with this caliber from the Citizen-owned Japanese movement maker. This three-hand movement with date is found in many microbrands’ watches and is rightly respected for its reliability and ease of service. In itself, it’s pretty unremarkable, but it’s the in-house module that Behrens places on top that makes the B015 NaviGraph so cool. 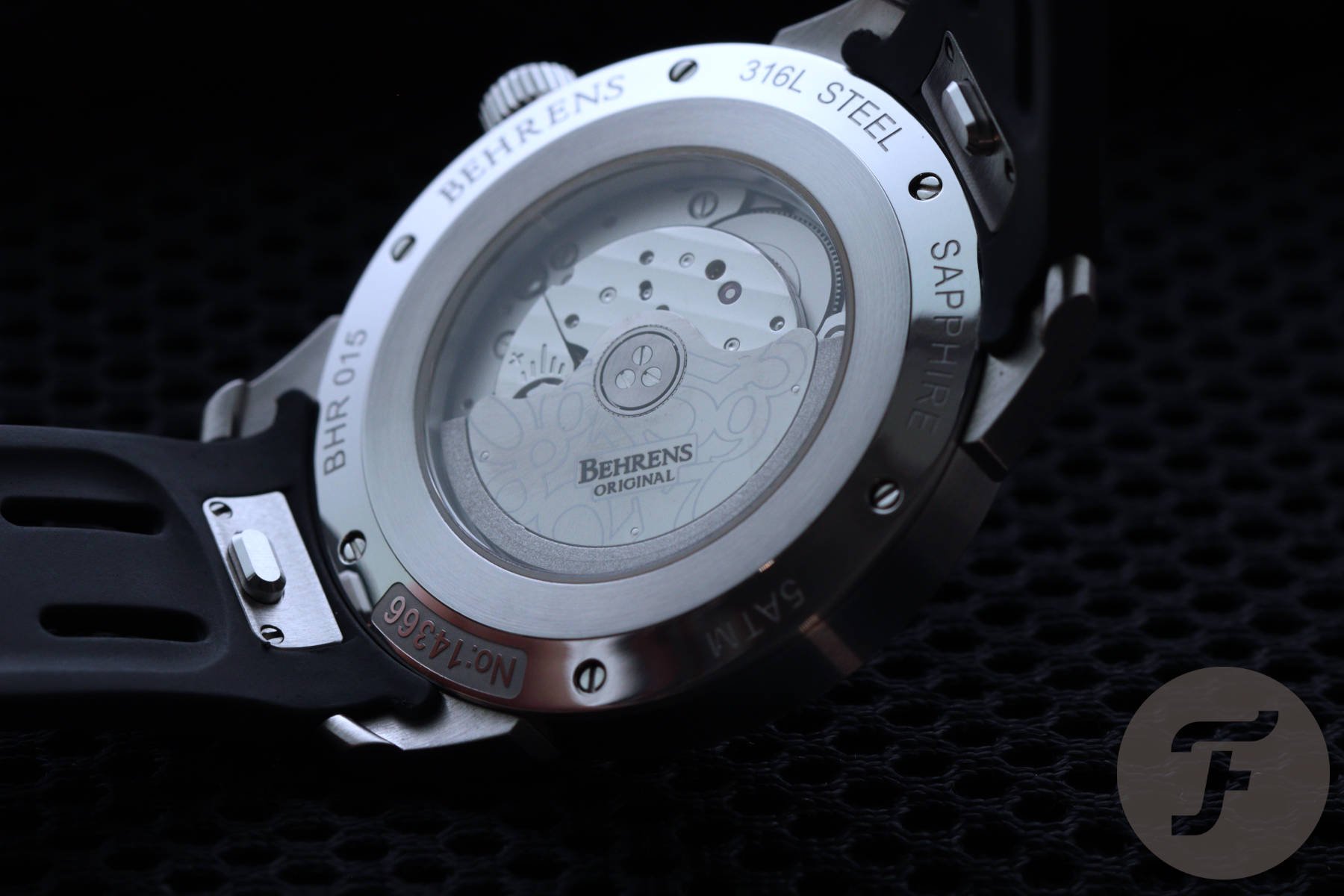 The four sub-dials break down the time and give extra functionality over the basic Miyota. At 9 o’clock and 3 o’clock, we have home hours and minutes, respectively. Then, at 12 o’clock, Behrens introduces an additional time zone/GMT function. At 6 o’clock, we have a 24-hour day/night display linked to the home hours. Finally, at half past 4, we have the date nicely integrated into the dial. It’s unobtrusive thanks to the metal date disc and the same font used across the rest of the dial. Date windows in this position sometimes cause a little controversy among collectors, but when it’s as well integrated as this, it’s tough to have anything negative to say about it. 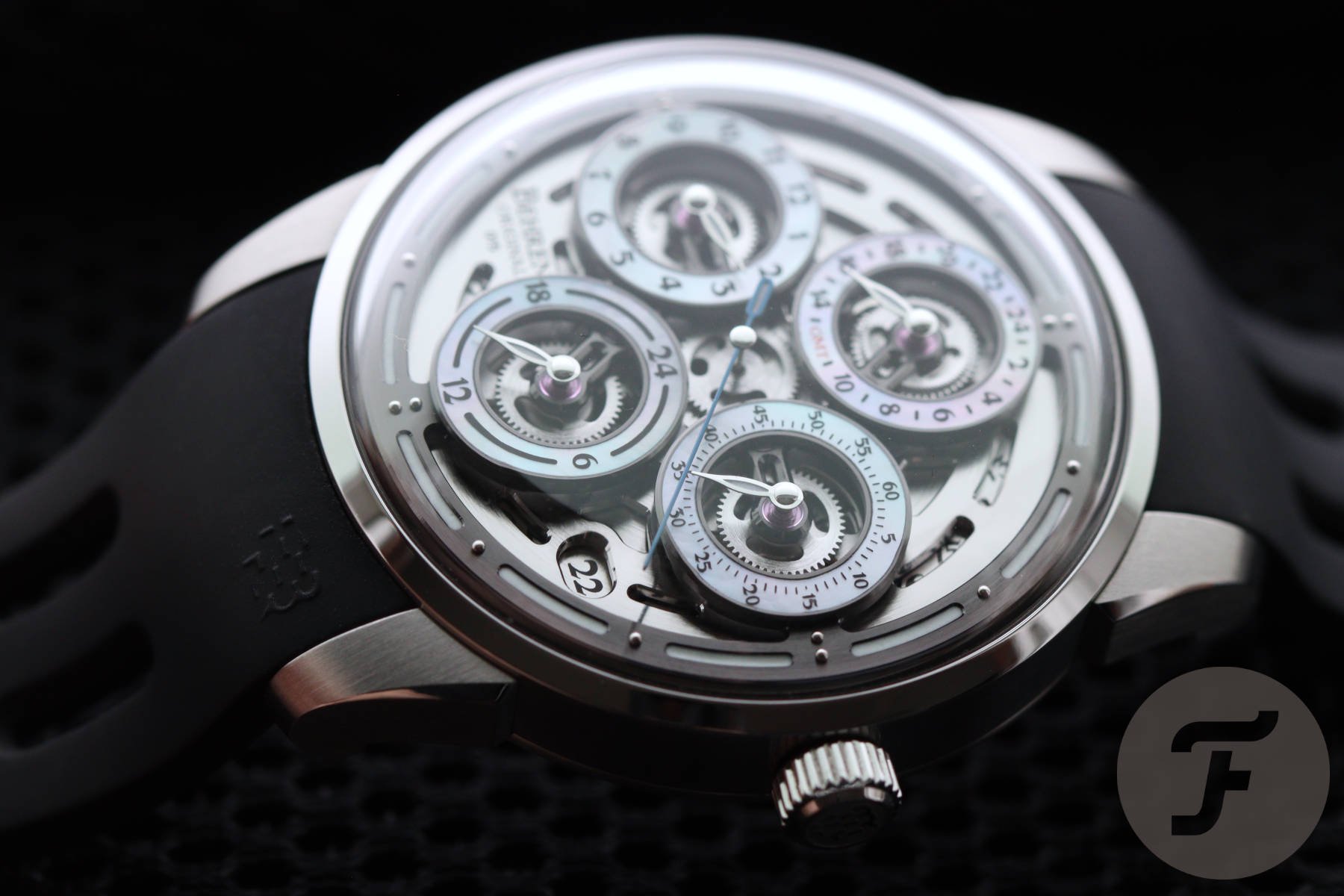 Some people initially mistook this watch for an MB&F LM Perpetual. There are certainly some visual similarities due to the quadruple-register layout, but the B015 NaviGraph goes its own way and doesn’t try to replicate the MB&F. 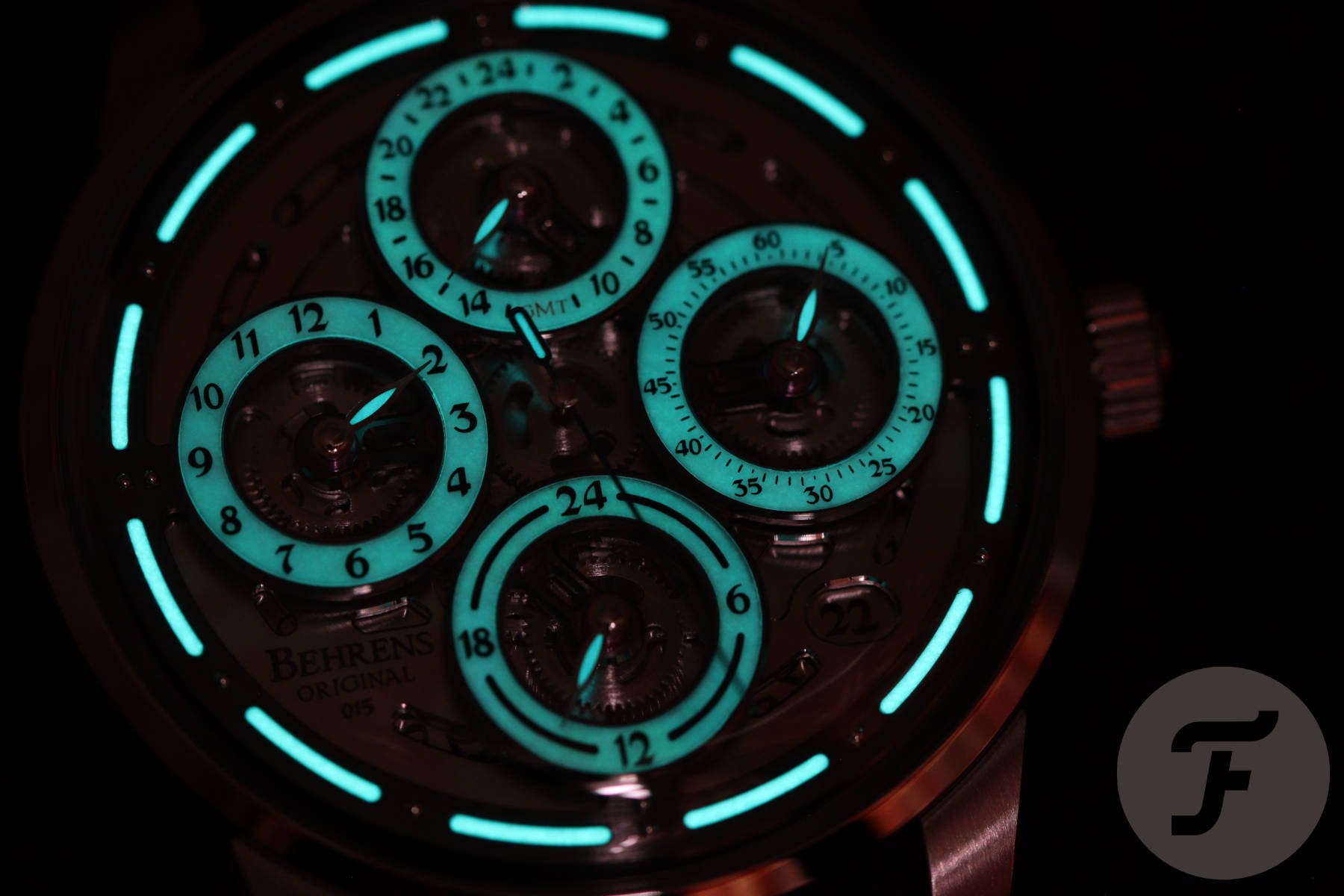 For the lume lovers among us, Behrens has you covered. Each of the four mother-of-pearl sub-dials is lumed along with all five of the watch’s hands. Around the dial’s edge, you can find a thin lumed circle broken up by five-minute markers. In low-light conditions, this watch is incredible to look at! Its personality is as bold in the dark as it is in daylight. 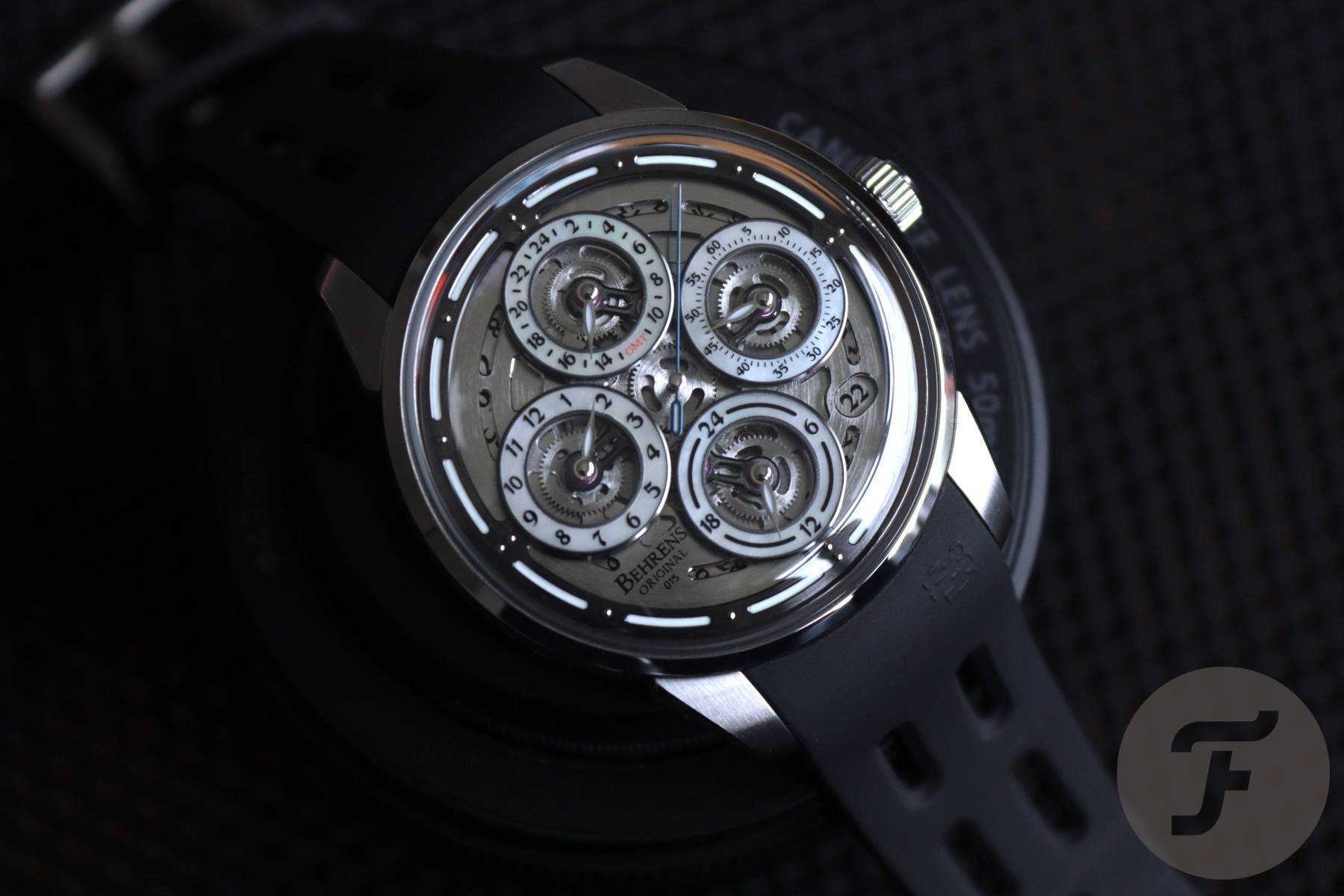 Mother of pearl for the NaviGraph’s sub-dials?

Considering the futuristic design of the watch, using mother of pearl for the sub-dials may seem odd. I’m far from the biggest MOP fan, but the effect is quite subtle. If given the reigns to the design, I might swap in plain white Lumicast sub-dial rings, but Behrens has done an excellent job with what we have here.

My other slight tweak would be the font choice. It’s one of the few things with this watch that I’m not wild about. Don’t get me wrong, I love this watch, but a simple, more modern font would be the right move. Behrens uses this font across most of its collection, but the Perigee and Mars Project One use a “digital-style” font that would complete the NaviGraph. 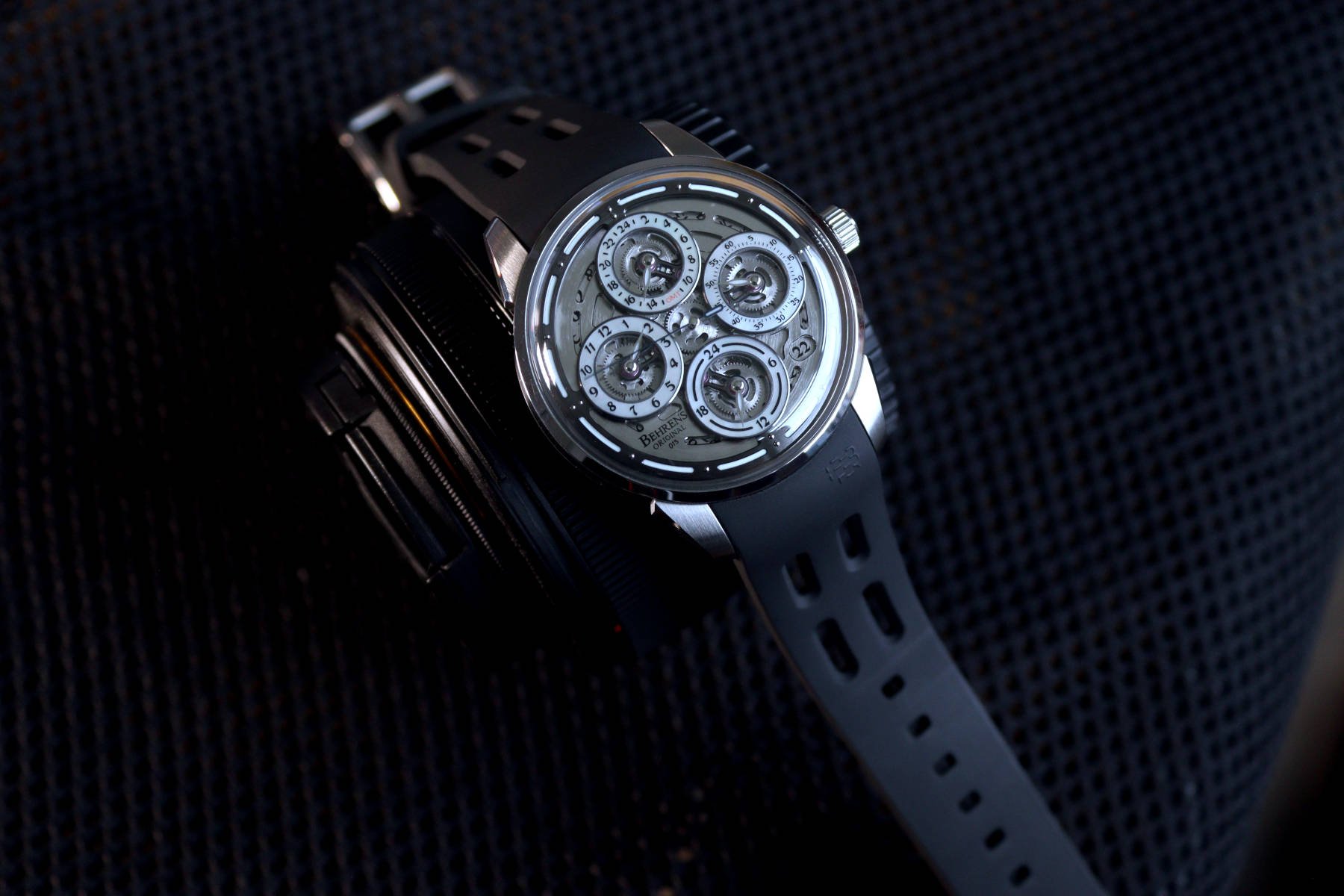 Comparable to some excellent company

I’m expecting some people to comment about the price concerning the base caliber inside the watch, but I have a counterpoint to consider. The B015 uses Miyota’s “premium” 9-series movement. Then, let’s consider the M.A.D.1 — rightly lauded for its quirkiness and “fun factor”  — which retails for more than the B015 NaviGraph and uses the standard 8-series Miyota movement. It’s not necessarily about what’s inside but what you do with it. The Behrens and the M.A.D.1 are excellent watches that focus on design, and both do an excellent job of it. My point is, don’t focus on the Miyota base caliber as it’s the in-house modules that do the heavy lifting here. Sure, both could have used a Swiss ébauche, but you wouldn’t gain much other than a higher price. 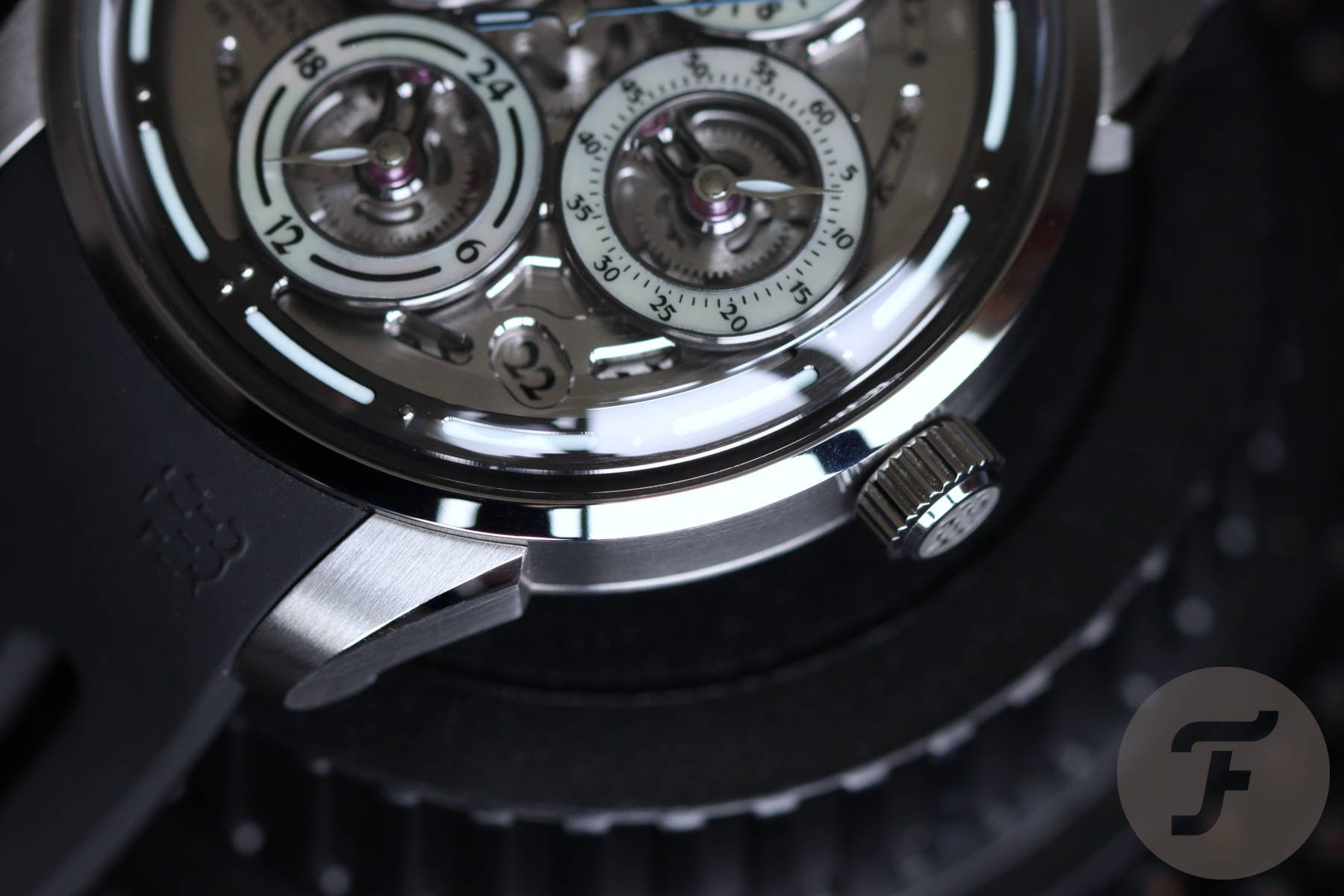 A lesson in the excellence of Chinese manufacturing

The B015 NaviGraph’s case is relatively simple by design. It has a 42mm round stainless steel case with simple lugs, but don’t let that fool you. The case is very well machined, featuring sharp lines and edges with a very uniform brushed finish. The transition between the finishes is flawless. Again, this execution bats well above its price point. The NaviGraph is a real lesson in the excellence of Chinese manufacturing at its best. I believe that it’s better to do something simple to the highest execution possible than to try something complicated and achieve a lesser final product. Behrens exemplifies this approach, which is little surprise given the brand’s inspiration and philosophical connection to its namesake! 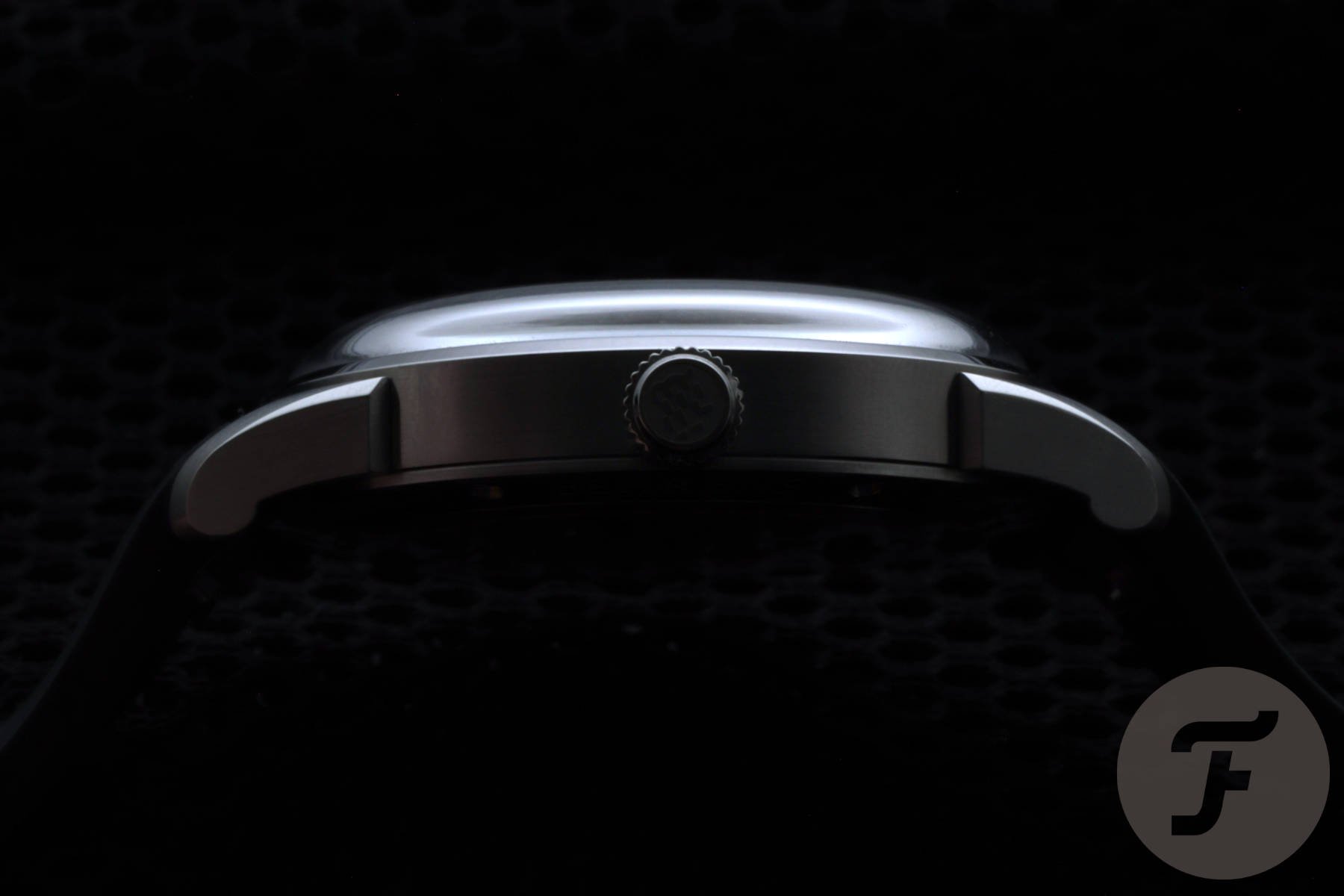 Behrens uses this same case right across the majority of its watches. Some may call this lazy, but if you have an excellent product, why limit it to one watch? The beauty is that the rubber straps perfectly fit almost all of the brand’s watches (more on that in a moment!). Versatility is no bad thing!

Around the back, Behrens chose an open case back with a sapphire crystal. Given the Miyota base movement, I’m not too bothered one way or another. The 9015 is a reliable yet basic movement, but it reminds you how cool the in-house module really is. Weightwise, the B015 NaviGraph comes in at 106g on the rubber strap and 70g as the watch head only. 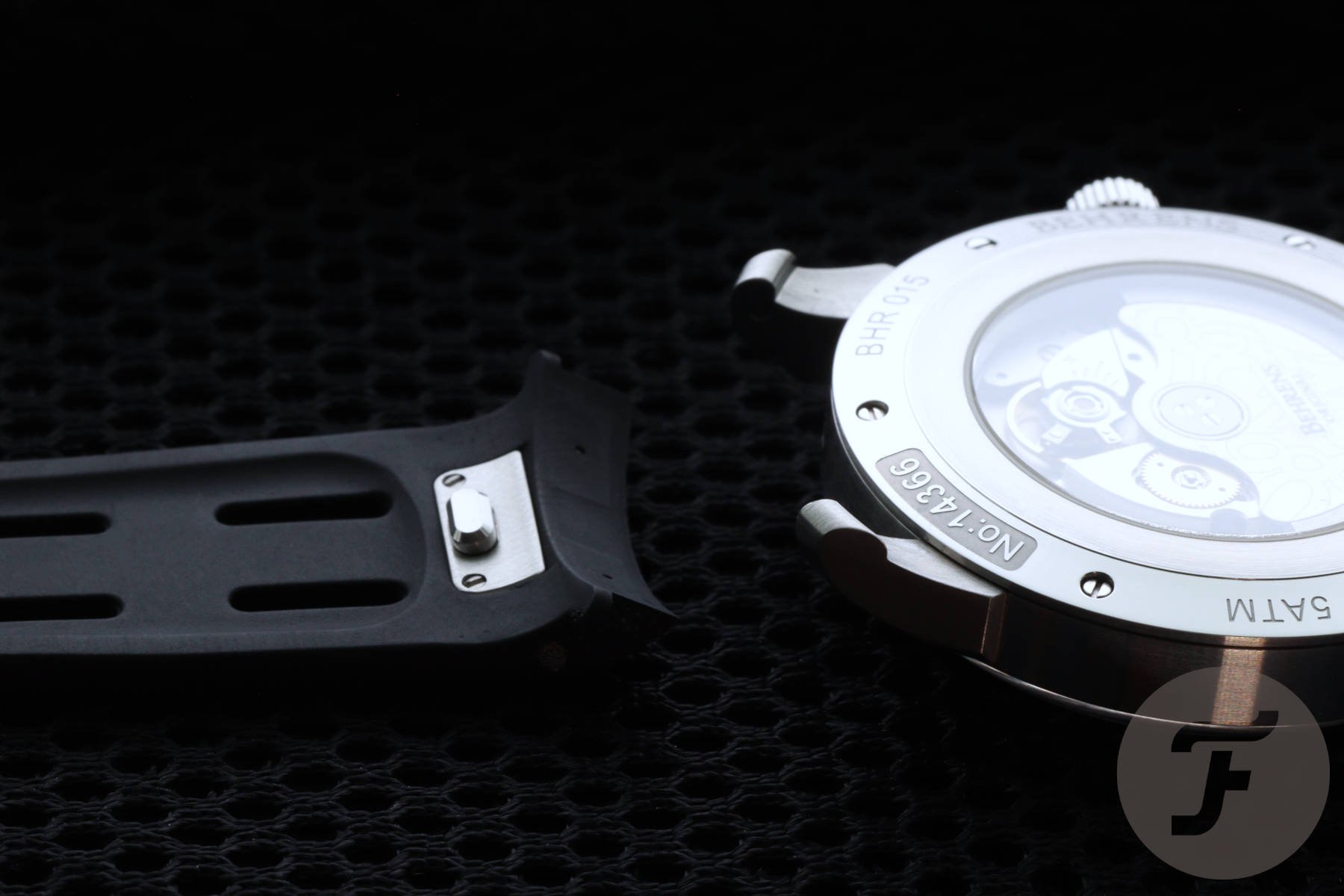 As standard, Behrens delivers the B015 NaviGraph on an alligator-leather strap. Due to potential CITES issues, I requested Behrens to swap it out for the fitted rubber strap. Boy, am I glad I did! I’m not the biggest fan of leather straps. I prefer the sportier, more modern look of rubber, and such characteristics better suit the B015 NaviGraph. Pure looks aside, the brand’s fitted rubber strap is simply superb. 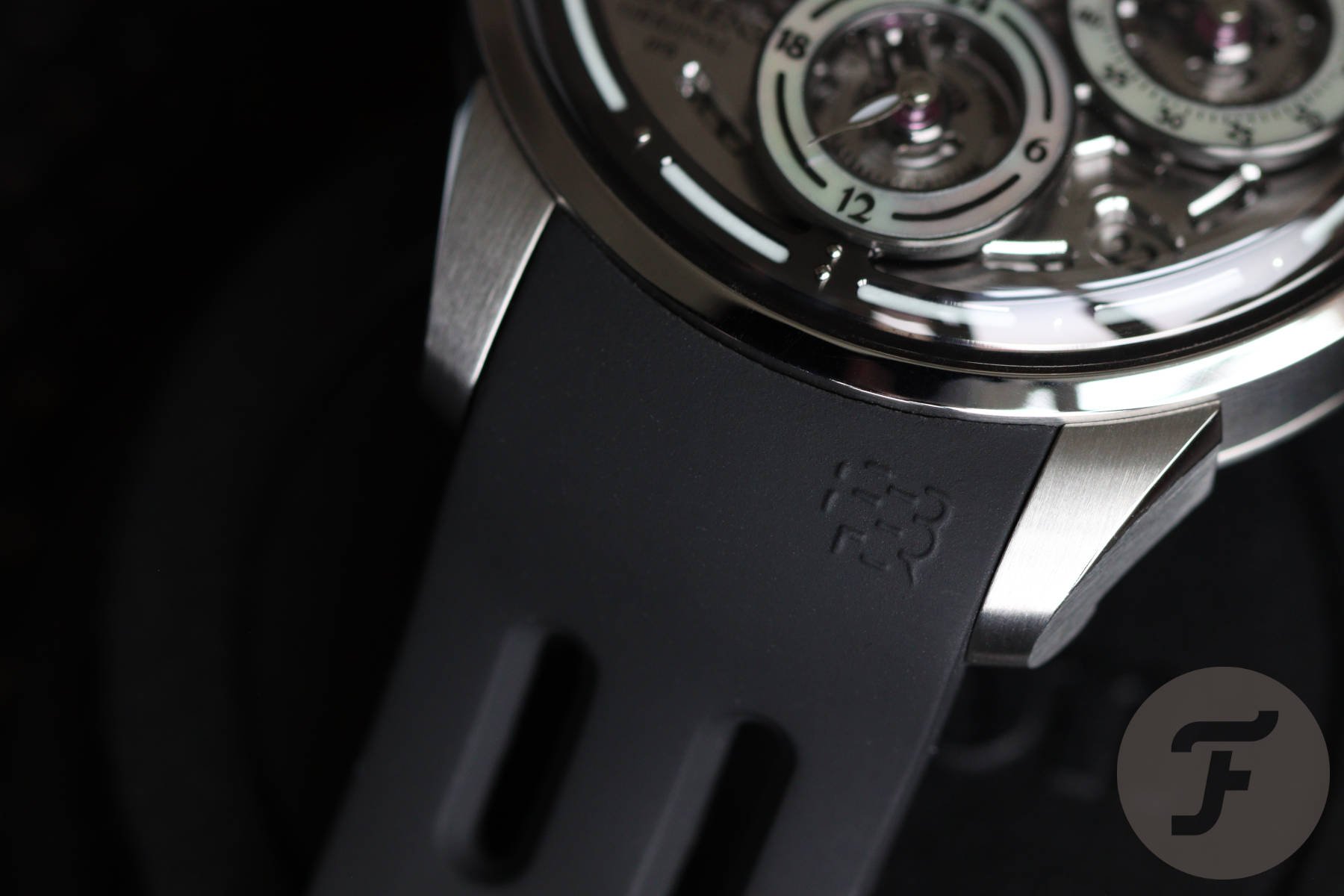 The fit perfectly follows the form of the NaviGraph’s lugs. The perfect harmony of the strap and case only contributes to the premium feel of this watch. The connection to the case is also superb. The strap attaches via a simple button on its underside, and the fit is excellent. I found zero wobbles or flex and no gap between the strap and case. The strap and connection performed better than watches several times the price. The execution was just impressive at every turn. I like to find flaws when I look at watches because things are so rarely “perfect”, but try as I might, I cannot find a single flaw with the strap. 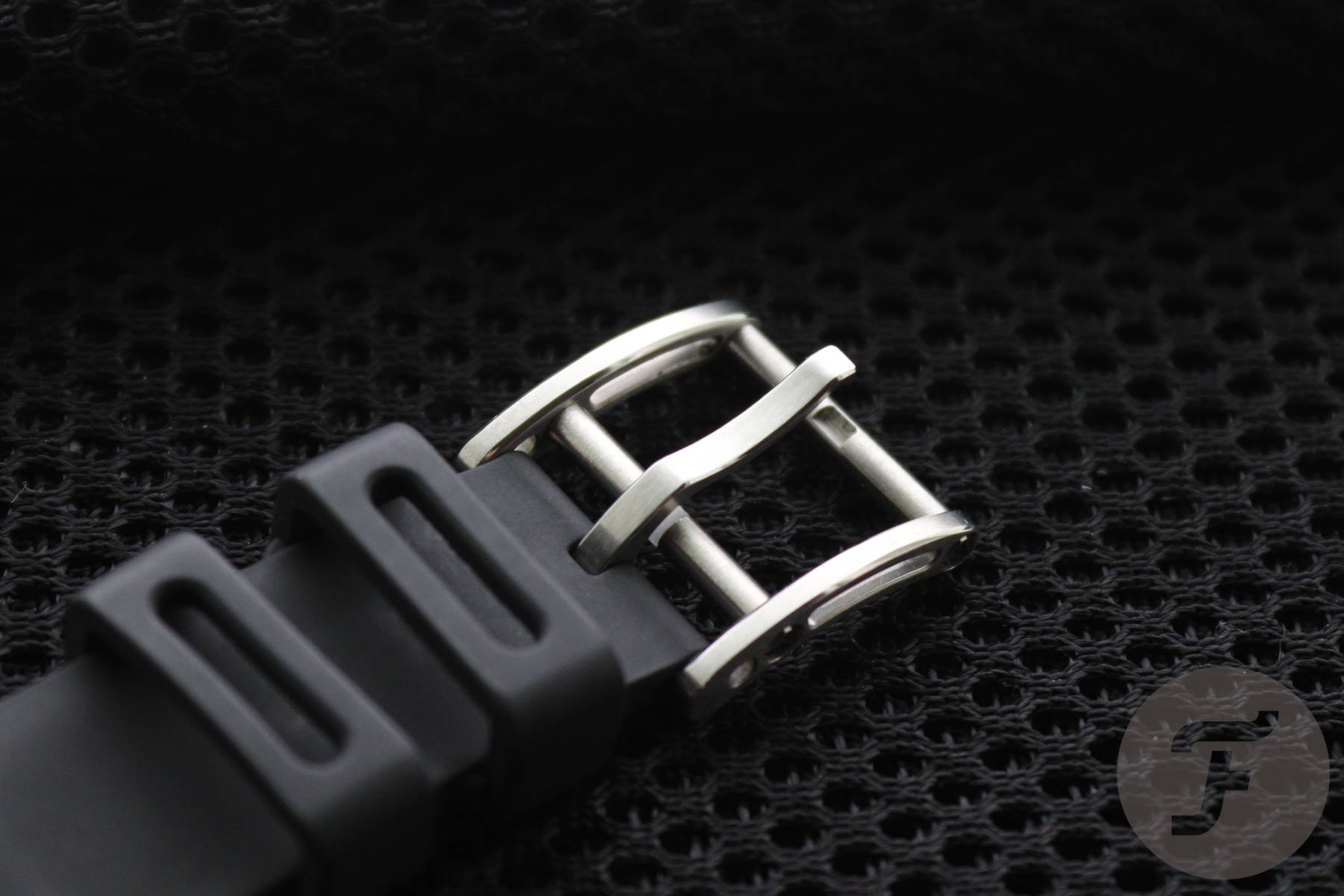 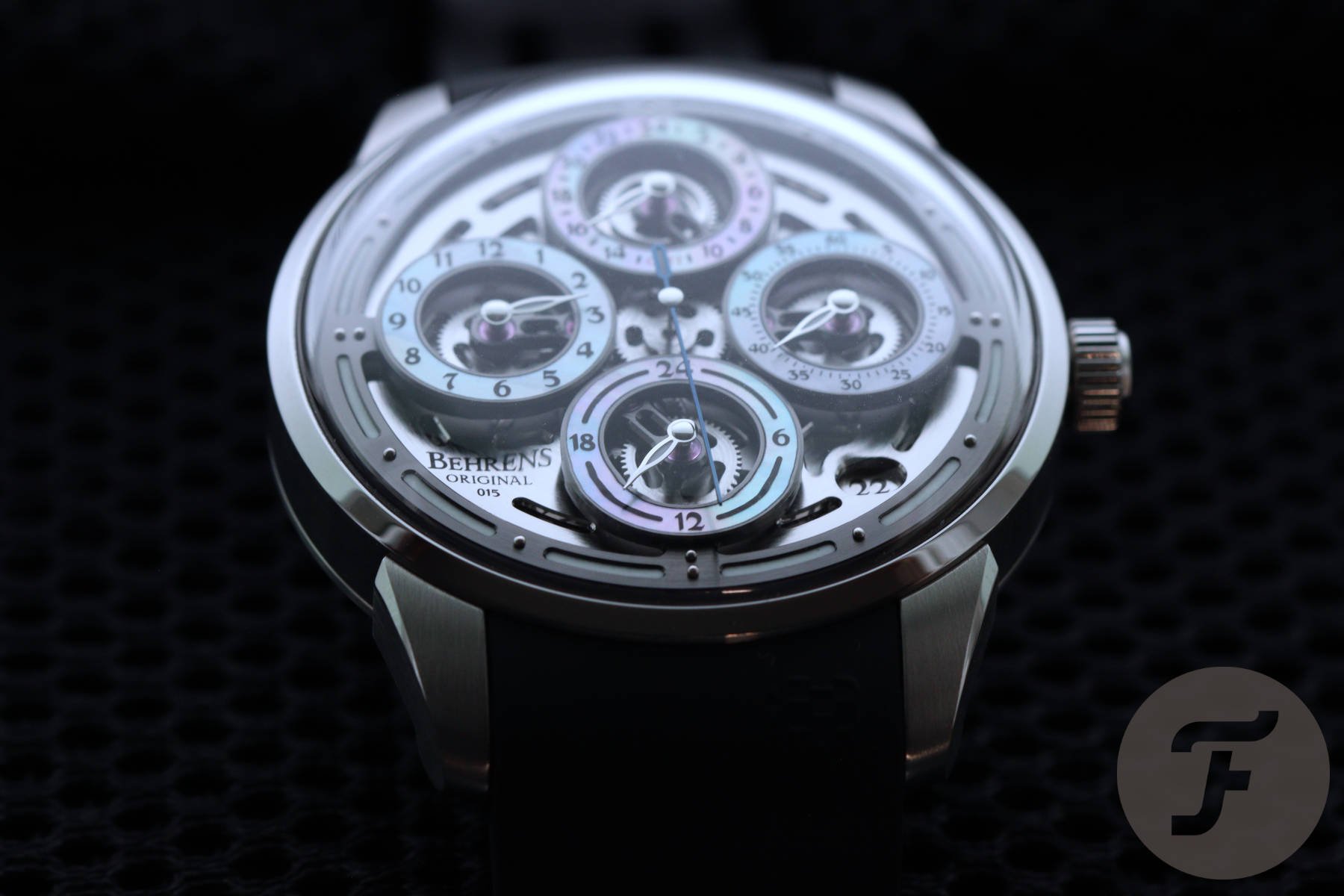 Final thoughts on the Behrens B015 NaviGraph

I hate to repeat myself, but I was impressed by what Behrens delivered for this price in terms of the construction and quality of the B015 NaviGraph. I like to point out things that brands can improve because it’s essential to highlight both the bad and the good. However, try as I might, the only things I would change are purely subjective. I’ve never worn a watch before that I have had quite so much difficulty criticizing. For a watch I have not seen covered or written about elsewhere, that’s something worth celebrating.

It’s not perfect. After all, “perfection” also relates to personal preferences and tastes. However, if the design speaks to you, then rest assured that the quality is superb — and I want to stress I do not say that lightly. Everyone who held and had a closer look at this watch at Geneva Watch Days was seemingly as impressed as I was. You’re unlikely to bump into another person wearing a Behrens watch, so if you’re looking for something a bit different that offers real value for your hard-earned money, then perhaps the B015 NaviGraph might be for you.

What do you think of this watch? Do you like it? Do you hate it? Let me know in the comments! You can find out more about the Behrens B015 NaviGraph here.