My list is made up of modern timepieces but the core design DNA stretches back decades. There are some examples in this list that are square-millimeter-perfect recreations and some whose design and mechanisms have evolved over time. No matter the evolution, the term “iconic” applies to all of these chronographs. But I am always keen to know your personal choices. Especially on any watches I may have missed. Importantly for me, an icon needs to be identifiable with only the silhouette.

Without further ado, here are my choices. 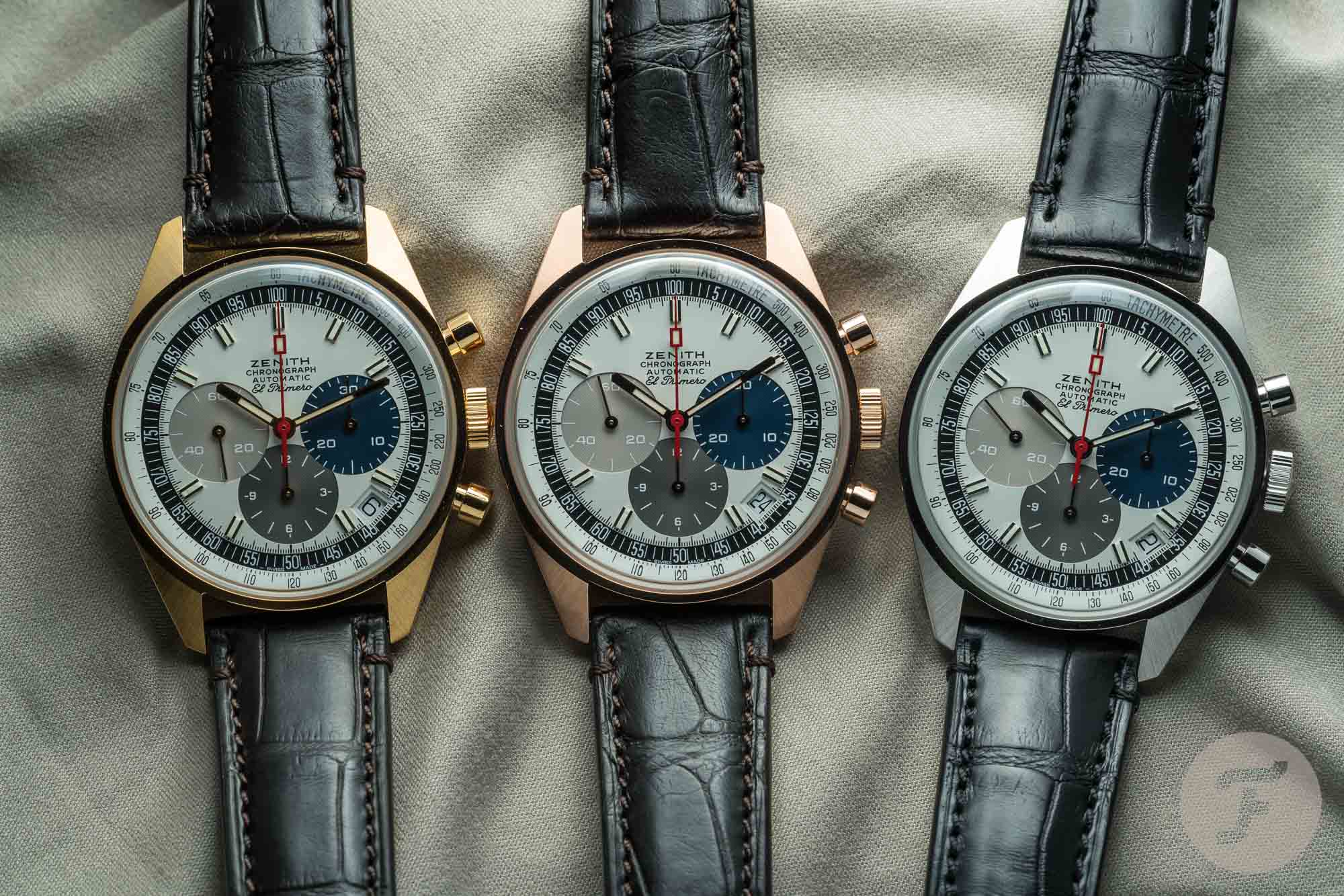 The end of the ’60s gave the watch world quartz timekeeping and the automatic chronograph mechanism. These two creations that have had a lasting impact on watchmaking. Their influence is felt to this day. The Zenith El Primero increased the operating frequency to 5hz from the typical 3hz. Consequently, the seconds hand boasted one of the smoothest sweeps the world had seen. Higher frequency movements are better able to retain their accuracy when subjected to the shocks of daily life. Although this arguably results in shorter service intervals, the technical performance was sufficient to justify such a trade-off.

The sub-dial overlap is the right way round.

Zenith lost its way in the early part of the millennium with monstrosities such as the Defy XTREME and Zero-G. These models were capitalizing on the Generation-X movement. Funnily enough, these trend-chasing designs became instantly outdated. Returning to its roots from the 2010s, the Zenith El Primero with Tricolore sub-dials recreates the look of the ’60s model. The El Primero in a 38mm case is available for €8,100 — and the sub-dial overlap is the right way round. By this I mean the smaller increments of the chrono minute sub-dial overlap the wider increments of the chrono hour sub-dial. This way, each function maintains its legibility. 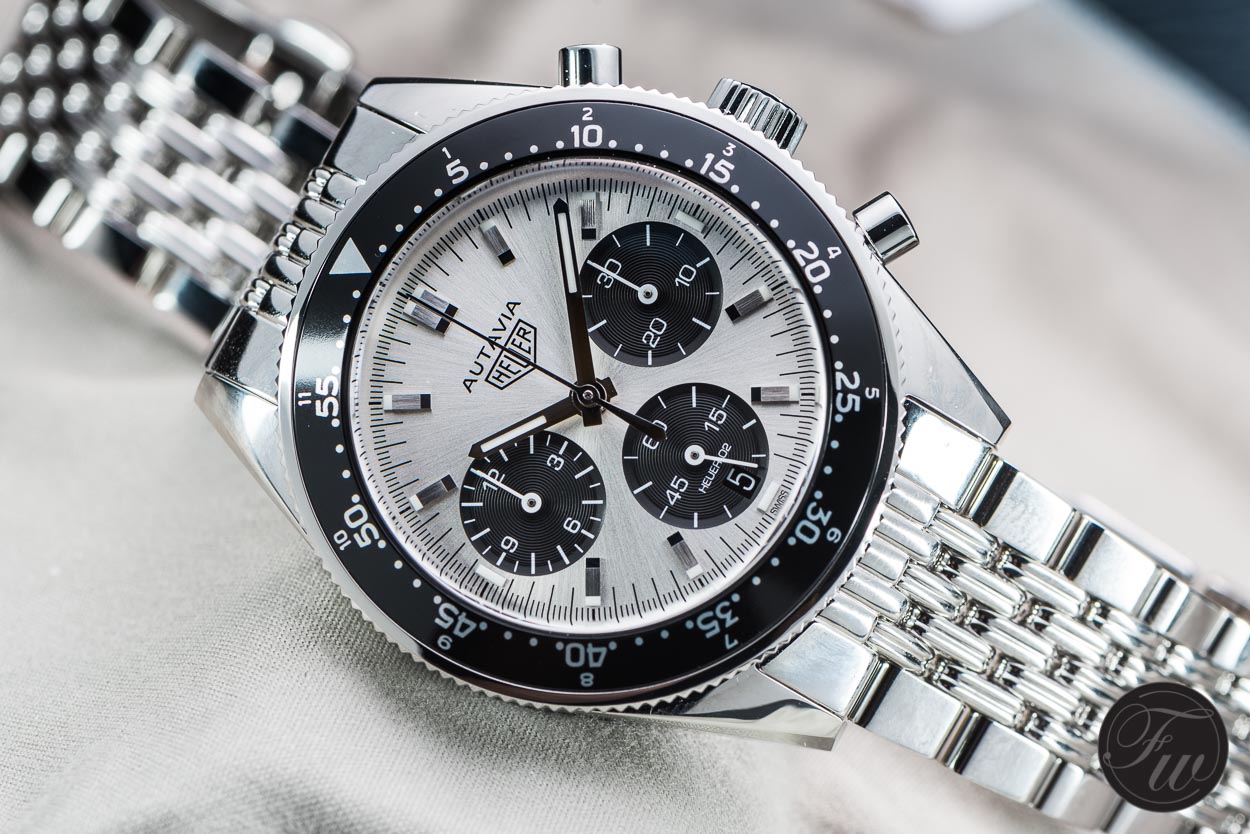 The Autavia was an iconic racing chronograph in the ’60s. But it was soon overthrown by Heuer’s — and the world’s — first automatic chronograph on sale, the Heuer Monaco. But as the years rolled on, vintage Autavias were gaining momentum on the pre-owned market. This frenzy was enough to catch the attention of then-LVMH Head of Watchmaking, Jean-Claude Biver. Back in 2017, the Heuer Autavia was formally unveiled at Baselworld with panda and reverse-panda dial options, and a 12-hour bezel.

Later came the 60-minute bezels, arriving towards the tail-end of 2017. In 2018, we also saw the release of the Jo Siffert-inspired racing model with silver dial and blue accents with both a 60-minute and 12-hour bezel. But for me, the best configuration of the modern interpretation of the Heuer Autavia is the 2017, 12-hour bezel reverse panda dial on the brown vintage-inspired leather strap. 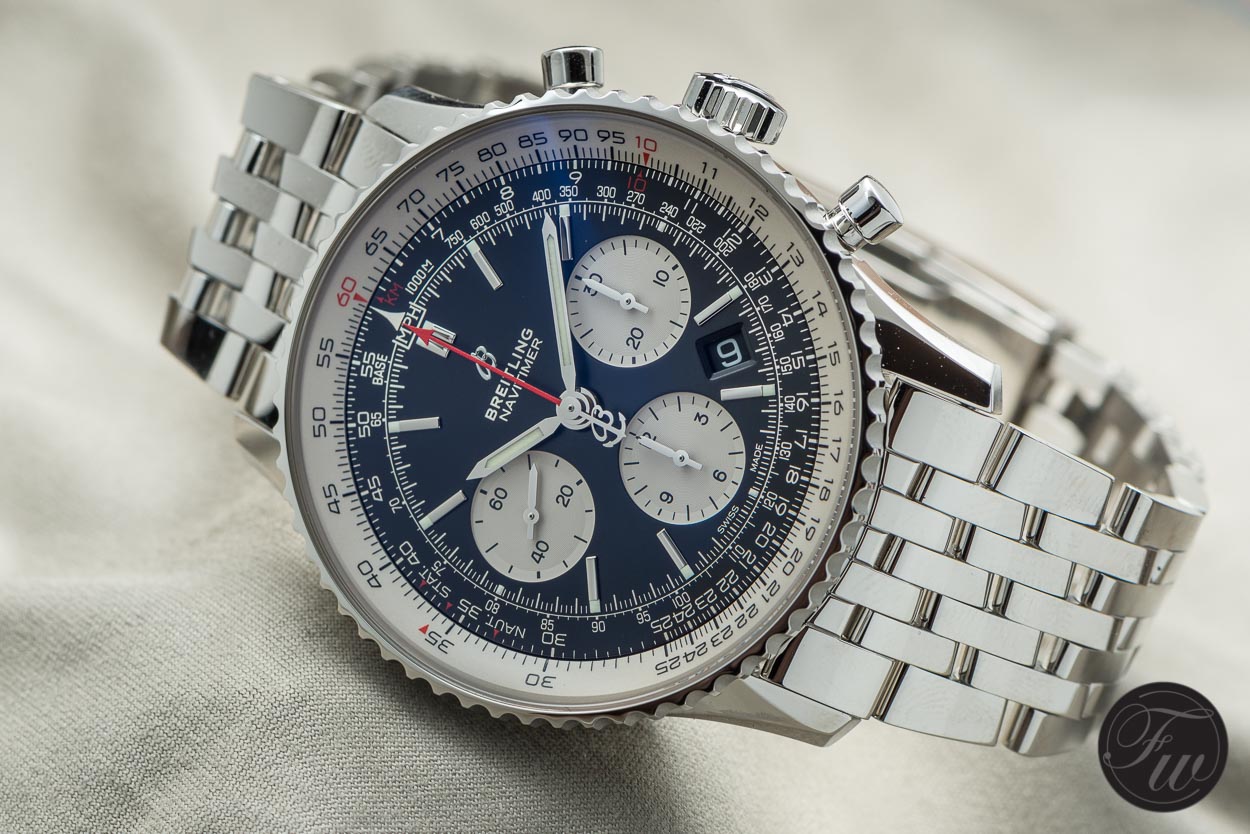 The bold and brave Breitling isn’t afraid to think outside the box. As such, the brand has turned its hand to several different styles of watches. Central minute hand chronographs for divers? Check. 24-hour movements for Cosmonauts? Check. Antenna beacons for survivalists? Check. Just looking through the archives and you’ll see a crazy collection of timepieces designed to meet a specific requirement at a precise time. Although, there is one model that has endured well over half a century without changing the core mechanics — the Navitimer and its slide-rule bezel.

The slide-rule converts measurements by the known fractions set at the 12 o’clock position. While pilots are trained to understand slide rule calculations, many consumers leave this feature alone. It has, however, been maintained due to the resulting aesthetic. The chronograph sub-dials can come in a matching tone or panda configuration. But the reverse panda design is seen by many as the defining look, especially in a stainless-steel case. The modern Breitling Navitimer 01 is available for €7,200, but we may see some changes in the coming months. Stay tuned to Fratello to learn more. 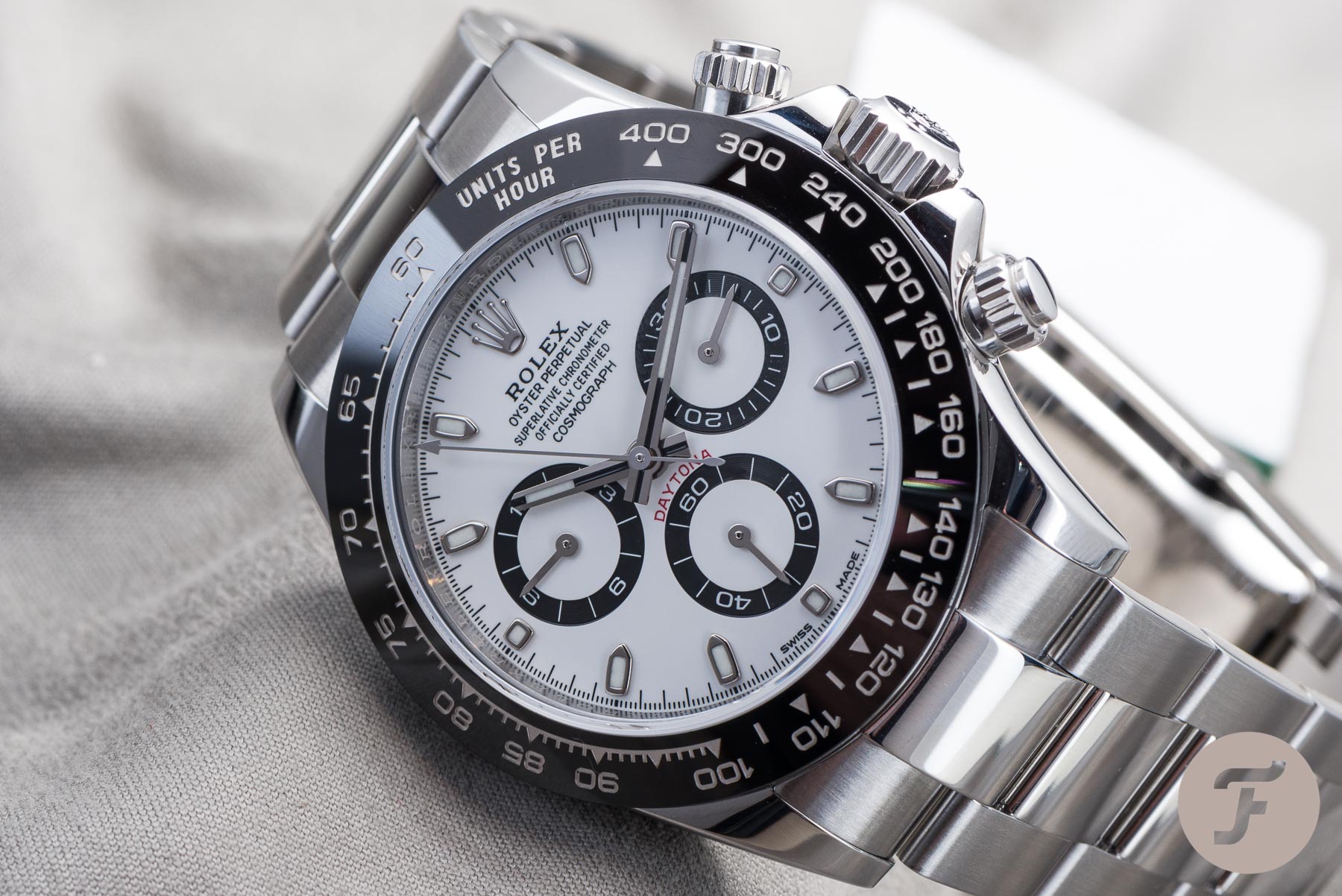 The Rolex Cosmograph Daytona, in all its guises, has been written about ad nauseam. But if you take a step back and look at it with fresh eyes, it’s an effortless design. If I asked you what the defining feature was, you’d be hard pushed to name just one. Yet the package as a whole is one of the most enduring timepieces from Switzerland. Even if you’re unfamiliar with watches, putting the words “Rolex” and “Daytona” together sounds right.

Rolex is famed for gentle model evolutions over time.

In any metal, with seemingly endless dial configurations, the Daytona has stayed the course with auction prices tearing up the record books. Chrono24’s 2019 analytics revealed “Daytona” was the most searched for model name within the most searched for brand on the site. Available — ahem — in stainless steel for €11,400, Rolex is famed for gentle model evolutions over time. While there have been movement and material innovations over its half-a-century of existence, the dateless, 3-6-9 racing chronograph layout has prevailed. Consequently, it has become the epitome of status for many collectors. Whether that’s a good thing or otherwise, however, is up to the individual to decide. 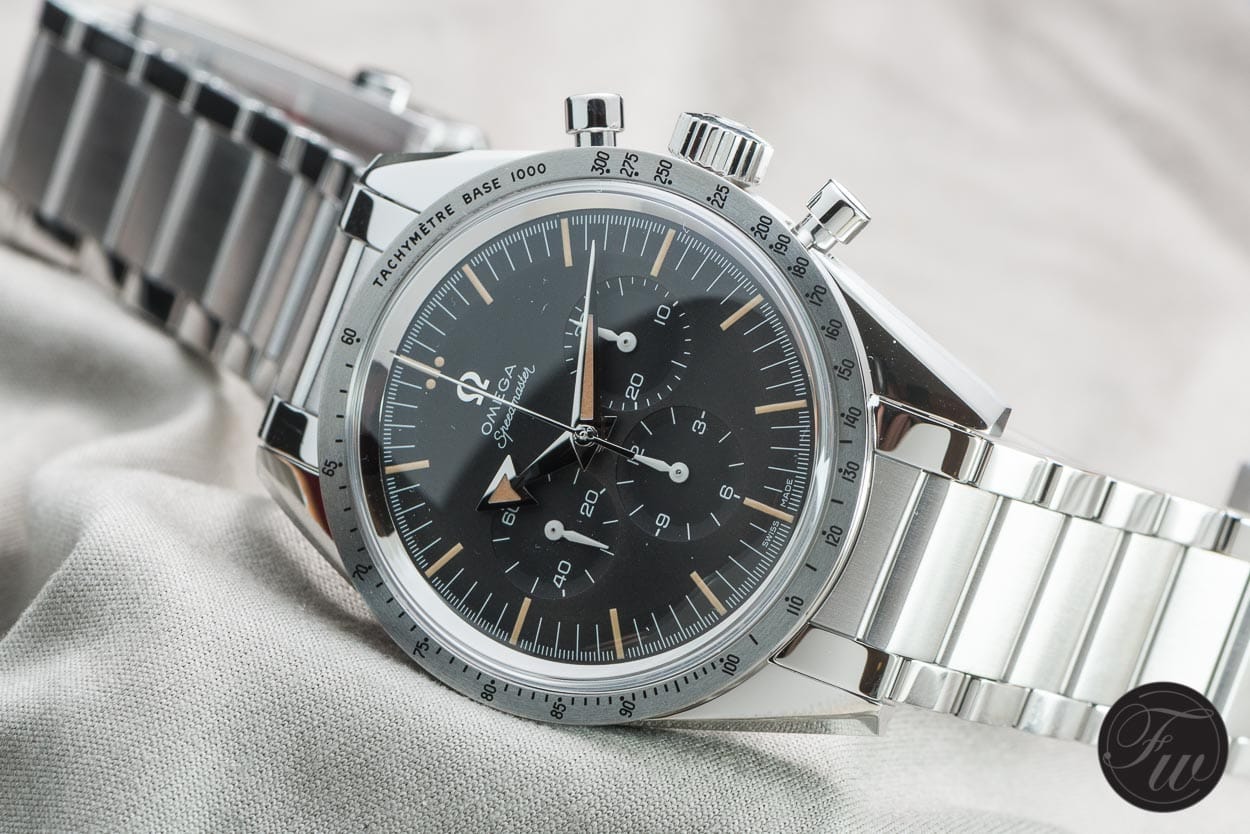 Omega’s Speedmaster has not seen the dizzying auction values of Rolex’s Daytona. But the Speedmaster has a claim to fame that others cannot match. The Speedmaster was worn on the Moon and is still a Government asset given to NASA and ESA astronauts for aerospace missions.

It even served as a crucial tool for timing sequenced thrusts on the Apollo 13 re-entry. But you all know this by now. So my choice for this list will be the pre-moon design that originated with the CK2915 in 1957. In my opinion, just staring at the dial side reveals so many exciting elements. The recessed sub-dials mimic moon craters, the bubble hesalite crystal, the broad arrow hands, and the defining feature to which Rolex owes a lot — the external Tachymètre bezel. The 60th Anniversary model is limited to 3,557 pieces for €6,625.