Do you like to sip on a grasshopper? This is the watch to match your favorite cocktail
Lex Stolk
comments 2
Share

You can opt for a “BP” with a standard black dial – with white numerals and indexes or retro-colored ones in the Heritage version — or silver in the Edition “Las Vegas”, or deep “Le Petit Prince” blue, if you’d prefer. Of all these dial executions, the IWC Big Pilot’s Watch IW501015 is by far the wildest. Unexpected, even, although what once was blue now turns green in the world of watches. Green is THE color right now. So what would you do if you had the choice? Would you go for black, blue, silver, or radiant green instead?

There are two types of green in the IWC collection. There are four Spitfire references with a bronze case and a matte green dial that has strong military green vibes. And there are the new Pilot’s Watch Chronograph 41 and the Big Pilot’s Watch with a metallic, radiant green dial. The striking hue is inspired by the “British racing green” that first was used in 1903. This is an interesting story: the 1903 Gordon Bennett Cup was held in Ireland when that country was still part of the UK. The race was held in Ireland because back then motor racing on public roads was illegal in Great Britain. To show respect, the British Napier cars were painted shamrock green that we now know as “BRG”.

… during a race, it’s easy to mistake the dark green Aston Martins for the black Mercedes cars with IWC sponsoring on the front wing.

The history of the famous racing greens was revived in 2000 by Jaguar Racing in Formula One. And Aston Martin F1 started to race in BRG this season — the manufacturer’s cars look very distinguished, I must say, but during a race, it’s easy to mistake the dark green Aston Martins for the black Mercedes cars with IWC sponsoring on the front wing. And so we’re back on topic: the IWC Big Pilot’s Watch IW501015. 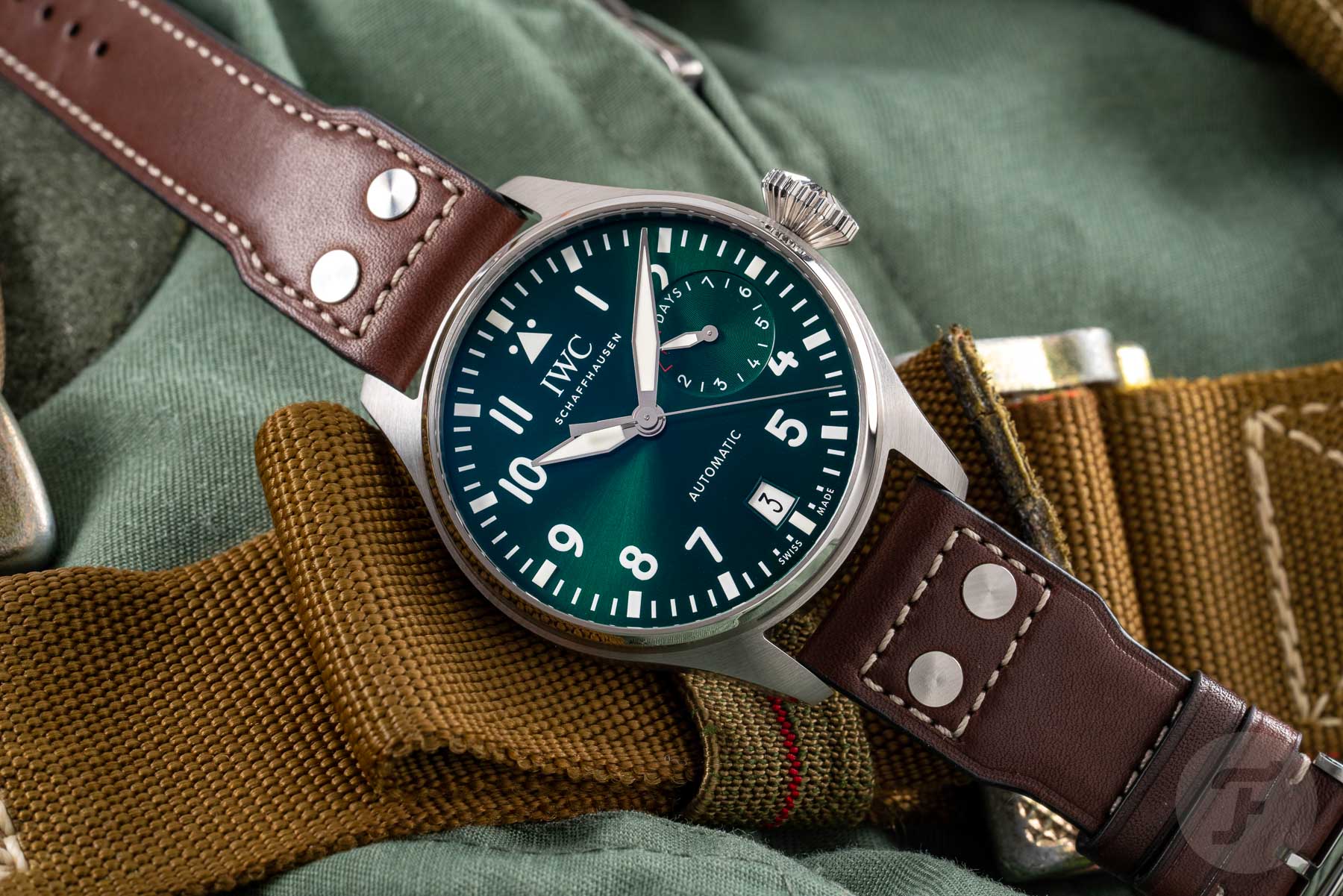 That’s all green and good when it comes to race cars, but what does a shiny metallic variant of BRG has to do with a pilot’s watch? That’s a very good question. Maybe because racecar drivers are sometimes referred to as pilots? I’m just guessing. There’s no logic or history behind it. It’s a matter of design, and after that matter, comes the matter of taste. 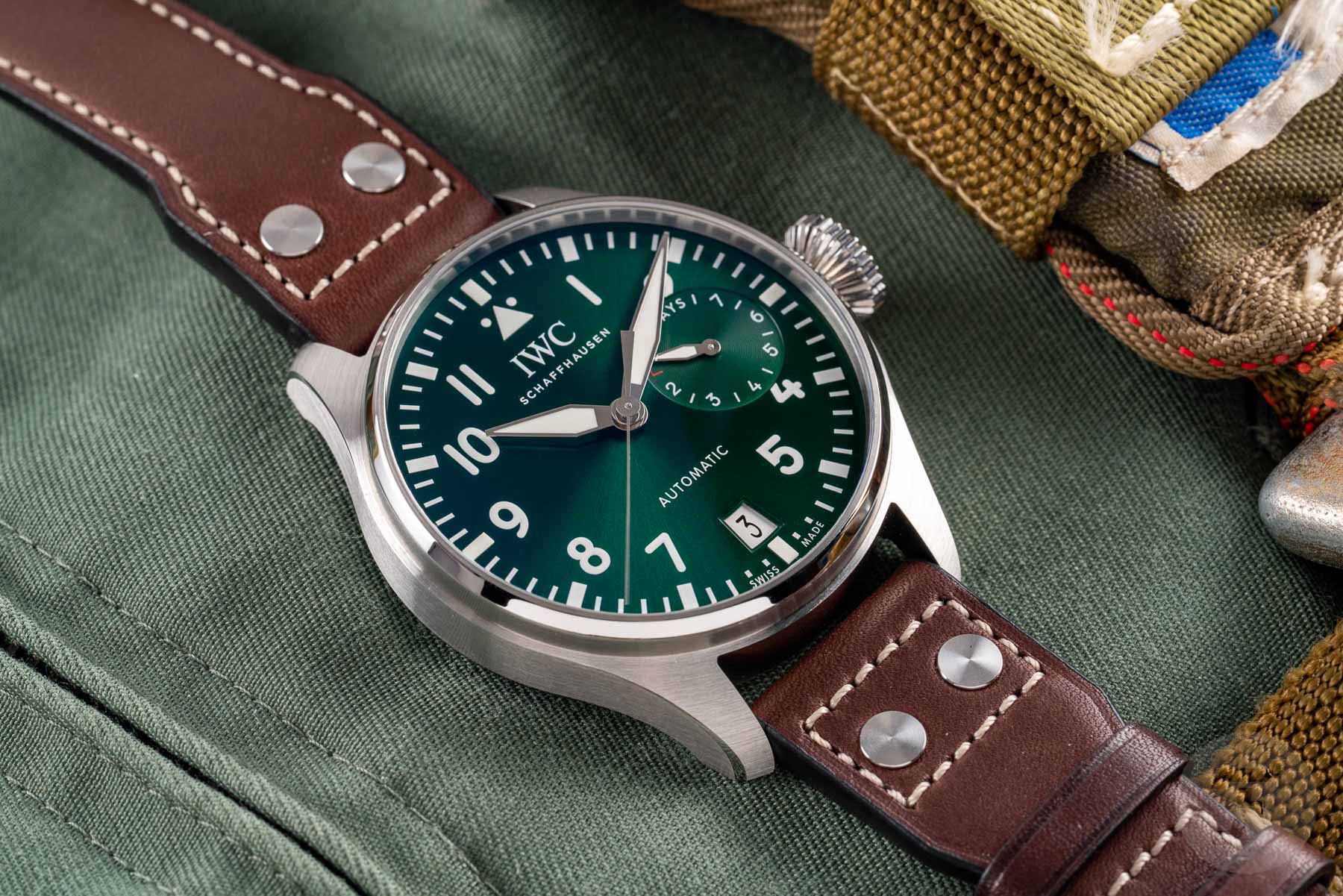 Green is good these days and if you’re into green dials why not have a watch with a very big dial to make everything as green as possible? In that case, mission accomplished, IWC. The brand from Schaffhausen didn’t choose the slimmed-down Big Pilot’s watch 43 you saw earlier on Fratello, to be trendy. No, they went all the way with the original 46.2×15.4mm version. 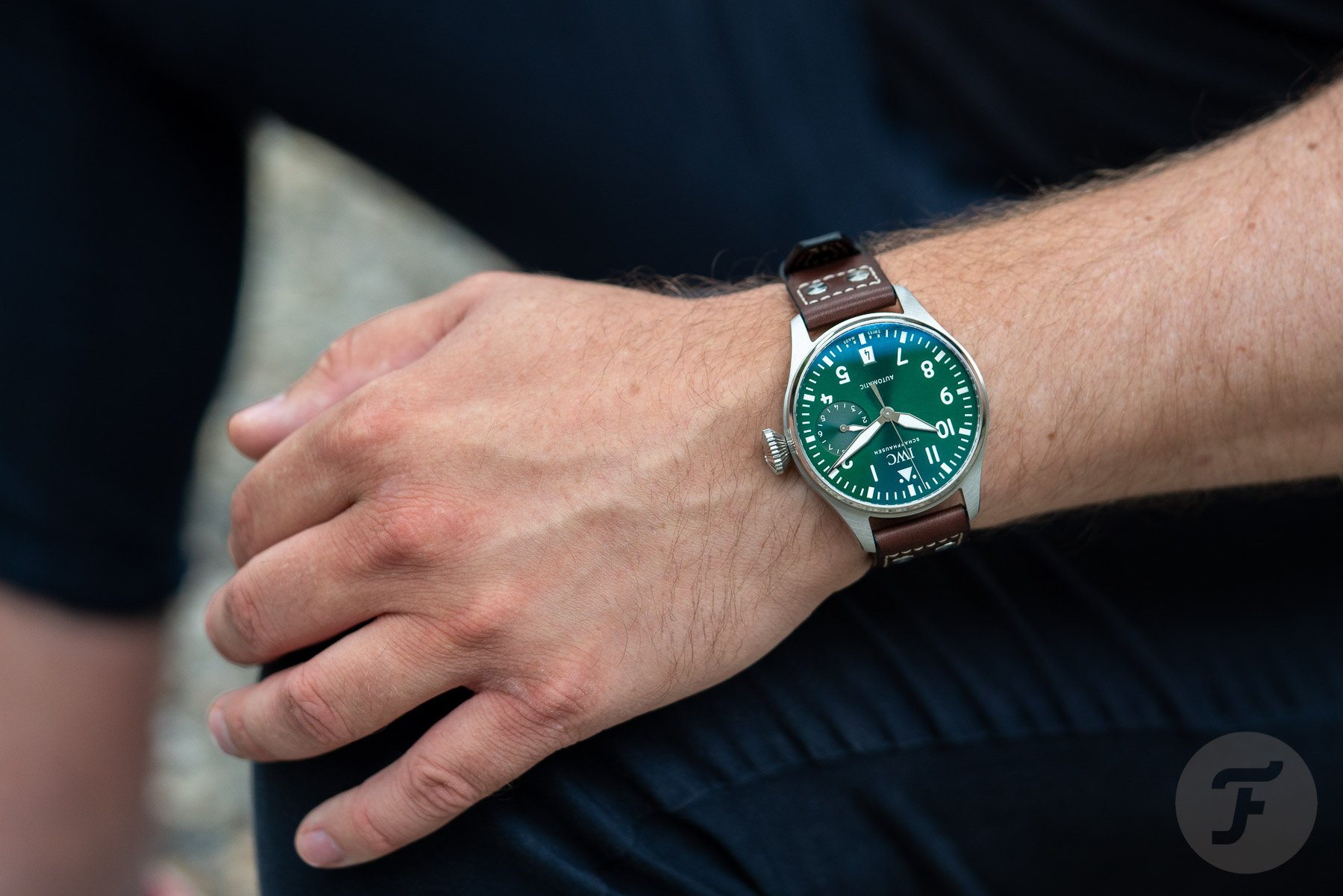 The Big Pilot IW501015 is the green-dialed version of the black IW501001 we had our hands on some time ago. There is nothing new under the radiant green “bonnet”. The price of €13,300 is nothing new either. It’s all about looks with this BP — maybe we should call it the “GBP”, short for Green Big Pilot — the contents have been left untouched. 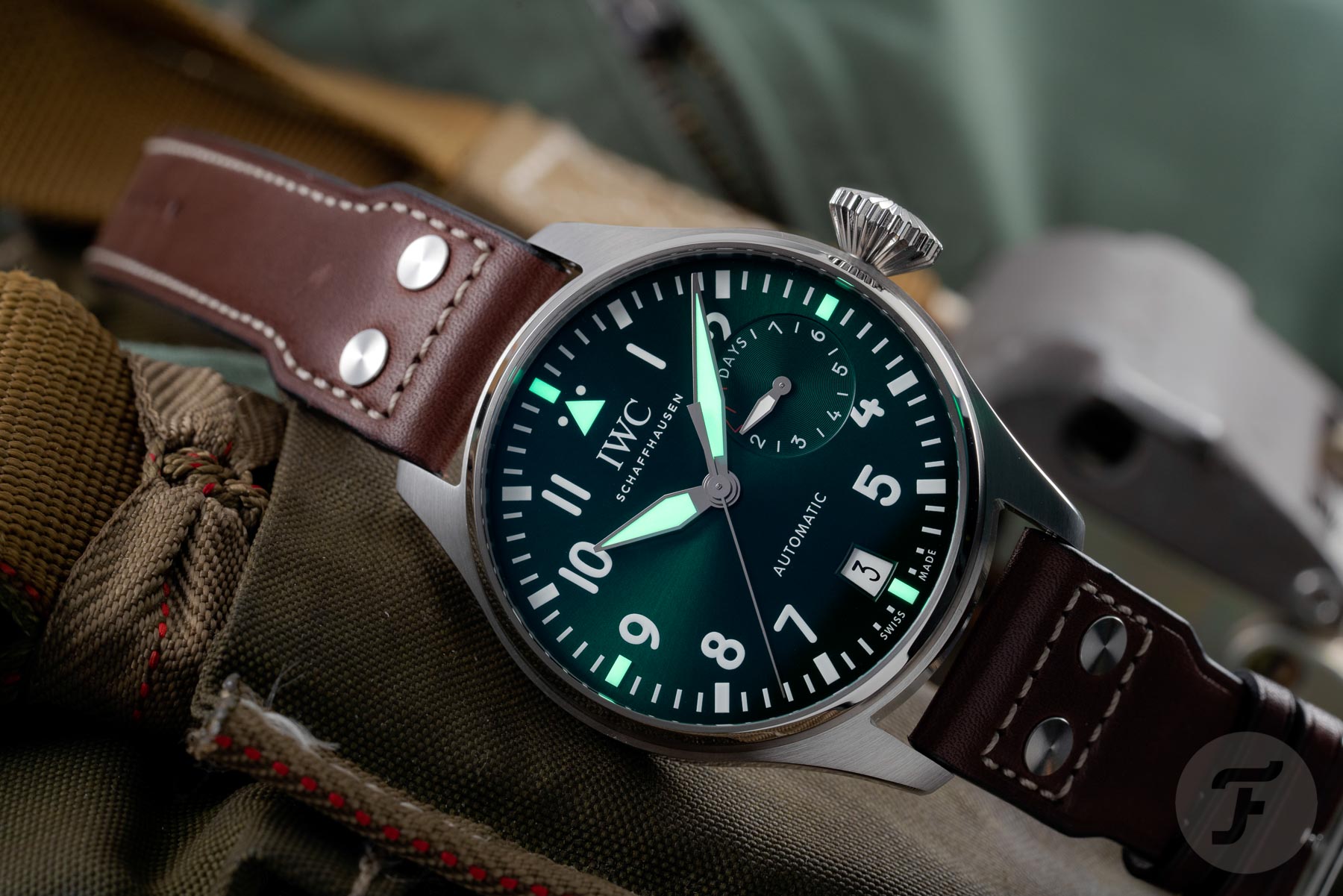 What looks like shiny green on the IWC website is actually a lot less metallic in real life. The green changes color in different lighting situations and brings out shades of black too. It also gets hints of brown from the riveted leather strap. So yes, it’s green, but not just plain green, this BP shows different shades of green. 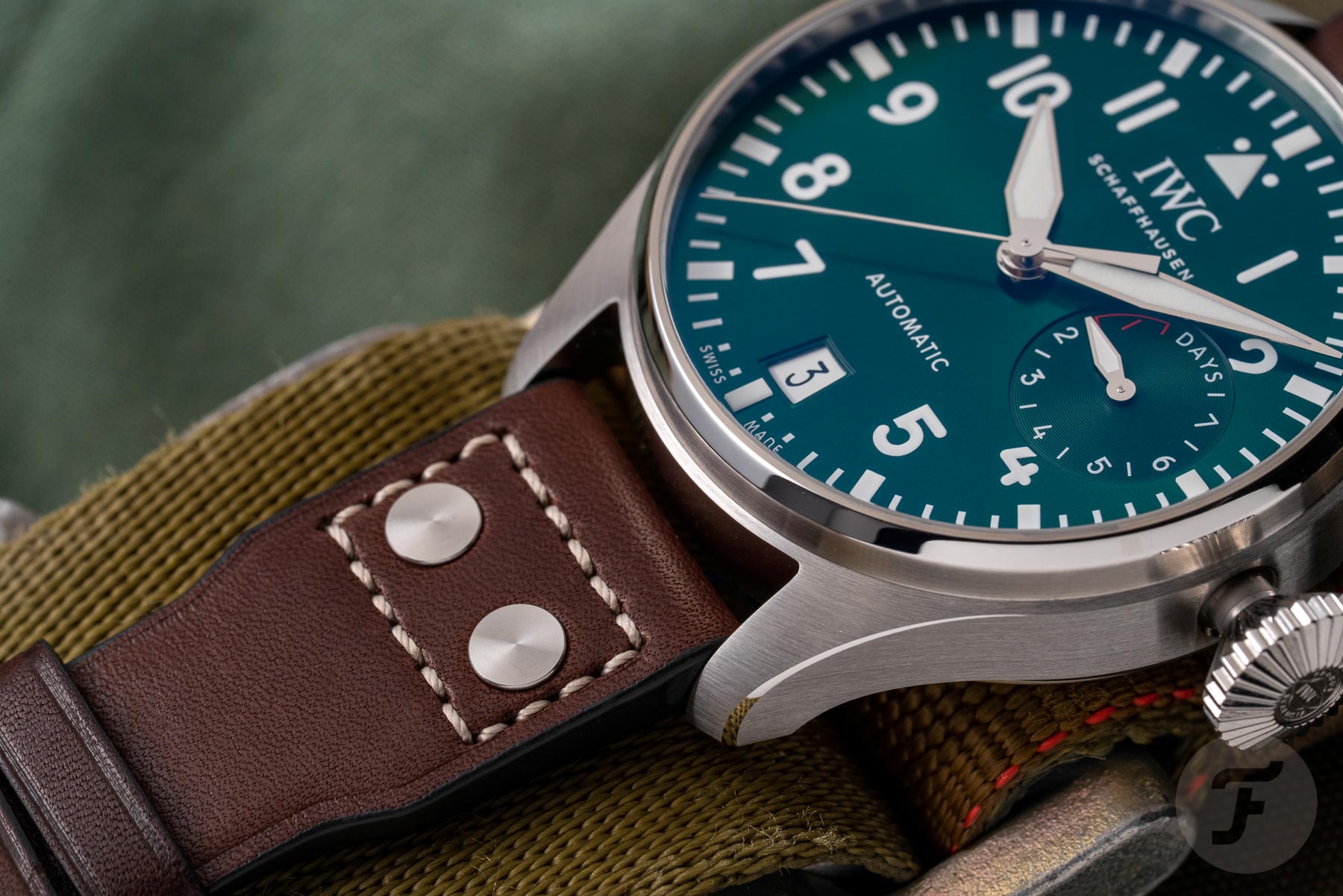 The IWC GBP and the grasshopper

The question is where do you rank the GBP in the BP pyramid? For many, the Big Pilot 5002 Transitional is the ultimate modern BP IWC made so far. This first version with an updated movement is a rare critter that ticks most tool watch boxes. The GBP is way more frivolous. This is the watch a pilot puts on after getting out of the cockpit and when he walks into a bar. And because he feels adventurous and self-confident he then, after he found himself a good seat at the bar, orders himself a grasshopper — 1-ounce green crème de menthe, 1-ounce white crème de cacao, 2-ounces heavy cream, and garnished with freshly grated nutmeg. He drinks it because he likes the taste; he wears it because he likes the color. Period. 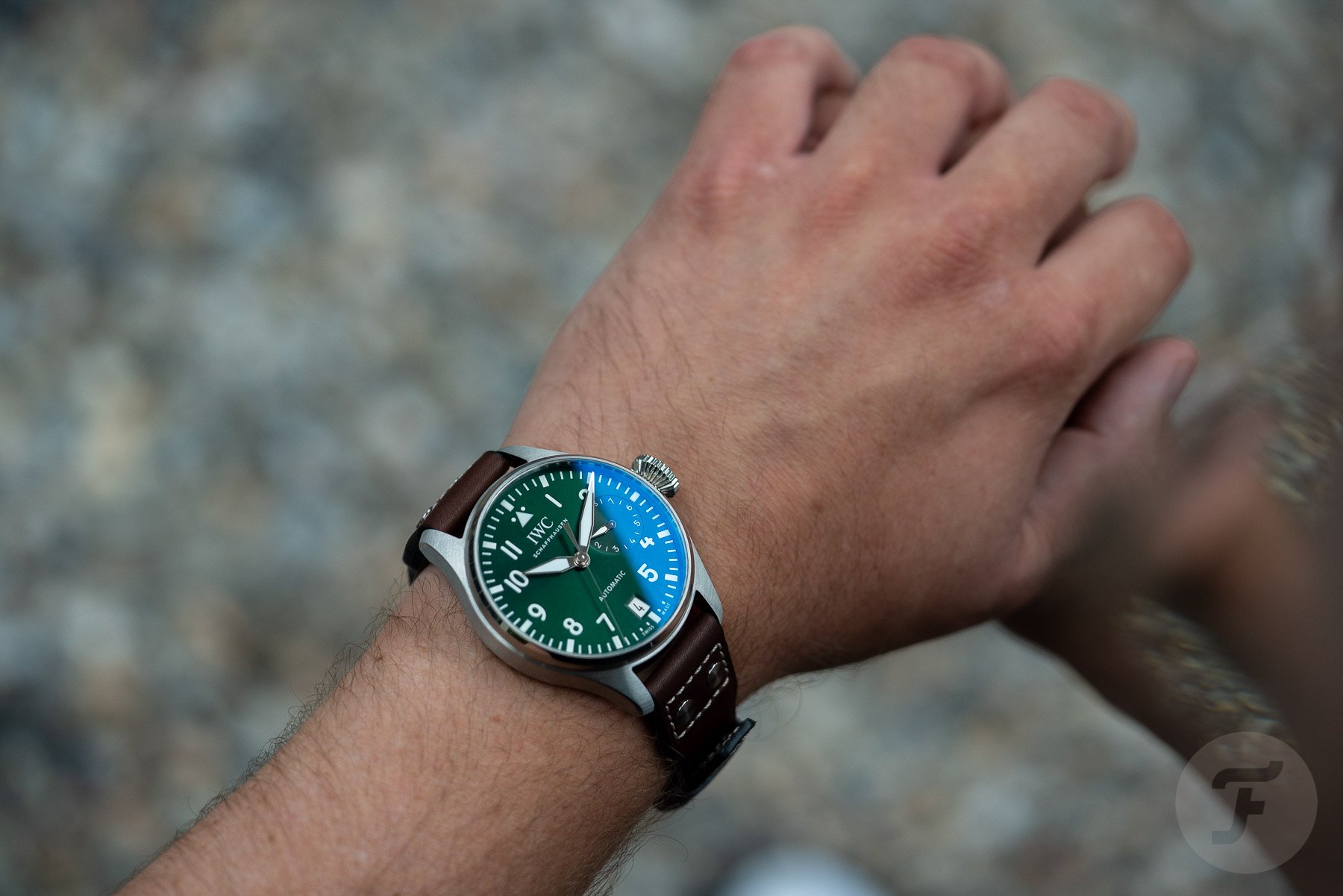 I’m not a grasshopper guy myself. But I can’t argue with personal taste, so if you like it minty and creamy, please, enjoy. The same goes for the GBP. I like the classic black version, but that doesn’t mean I like a more adventurous take on the BP theme, such as the Big Pilot’s Watch Top Gun Edition “Mojave Desert” in ceramic beige that’s inbound. This green is not my number-one BP. But if it’s yours, go sit at a bar with your GBP, have a grasshopper, and enjoy. Come to think of it, maybe BGP is not the right nickname after all. It should be “Grasshopper”? 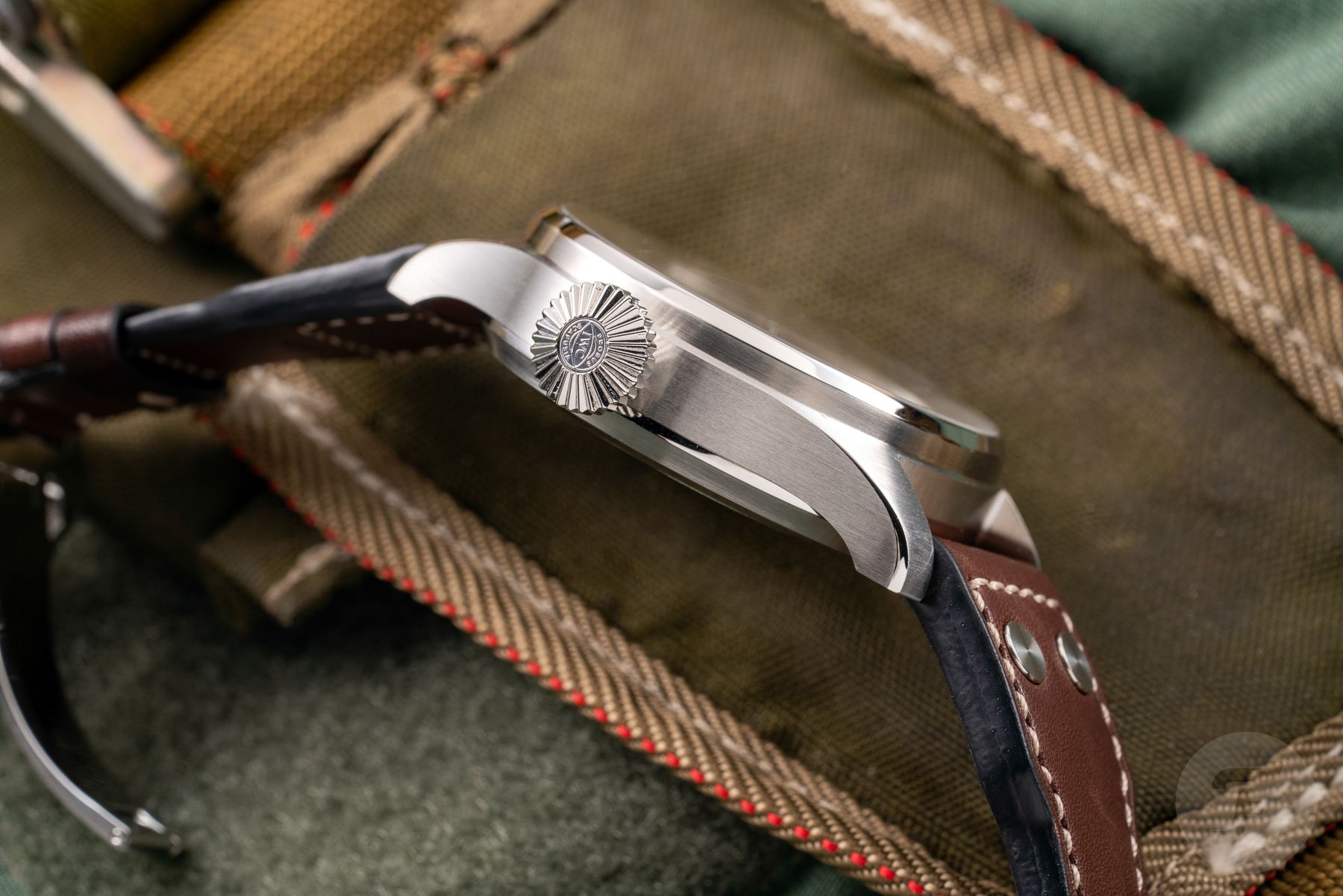 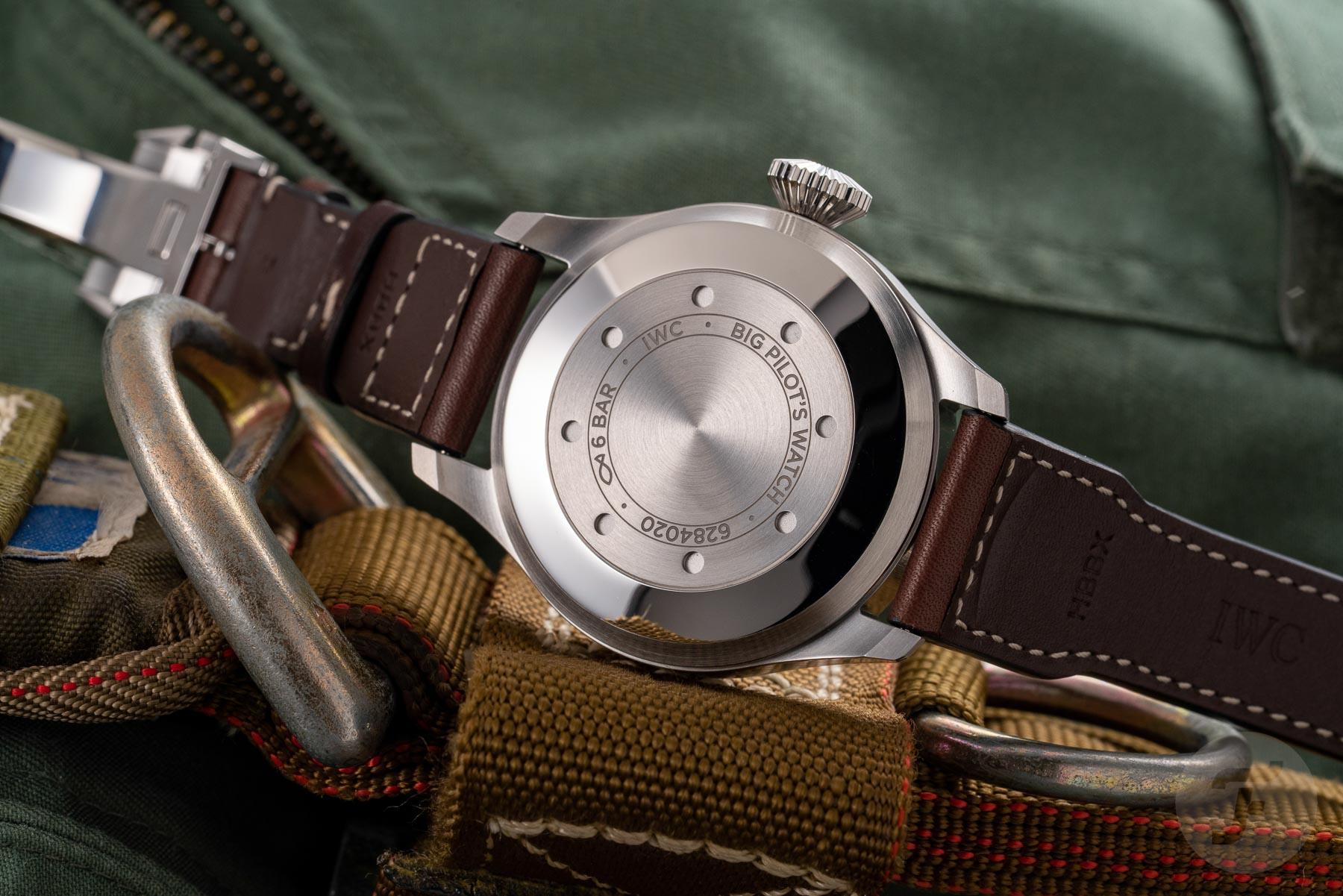