Who knew a G-Shock could scrub up so well!
Sky Sit
comments 11
Share

Casio has done it again. The brand has made another leap to advance G-STEEL as an ana-digi steel watch in the “tough premium” space. Since the 2015 debut of this affordable metal G-Shock line, the Japanese electronics giant has made a few major improvements to the watches both inside and out. Barely in the fifth update, what we have here is the new release GST-B500D-1A. The latest model combines a carbon-fiber-reinforced core guard with a stainless steel body. It is the thinnest G-STEEL iteration to date evolved with a few refinements. And who can still argue that a steel G-Shock would look out of place under a shirt or a blazer?

I must confess, I lived through the Baby-G launch craze. Even though I had exactly zero knowledge about watches at the time, it was the coolest thing to wear at one point in my school years. The TAG, the Tudor, and the Rolex that I got gifted never saw the light of day. Those were not “cool”, whereas a G-shock would carry a certain cachet. Then came adulthood, and I left plastic watches behind, as I did athletic life. 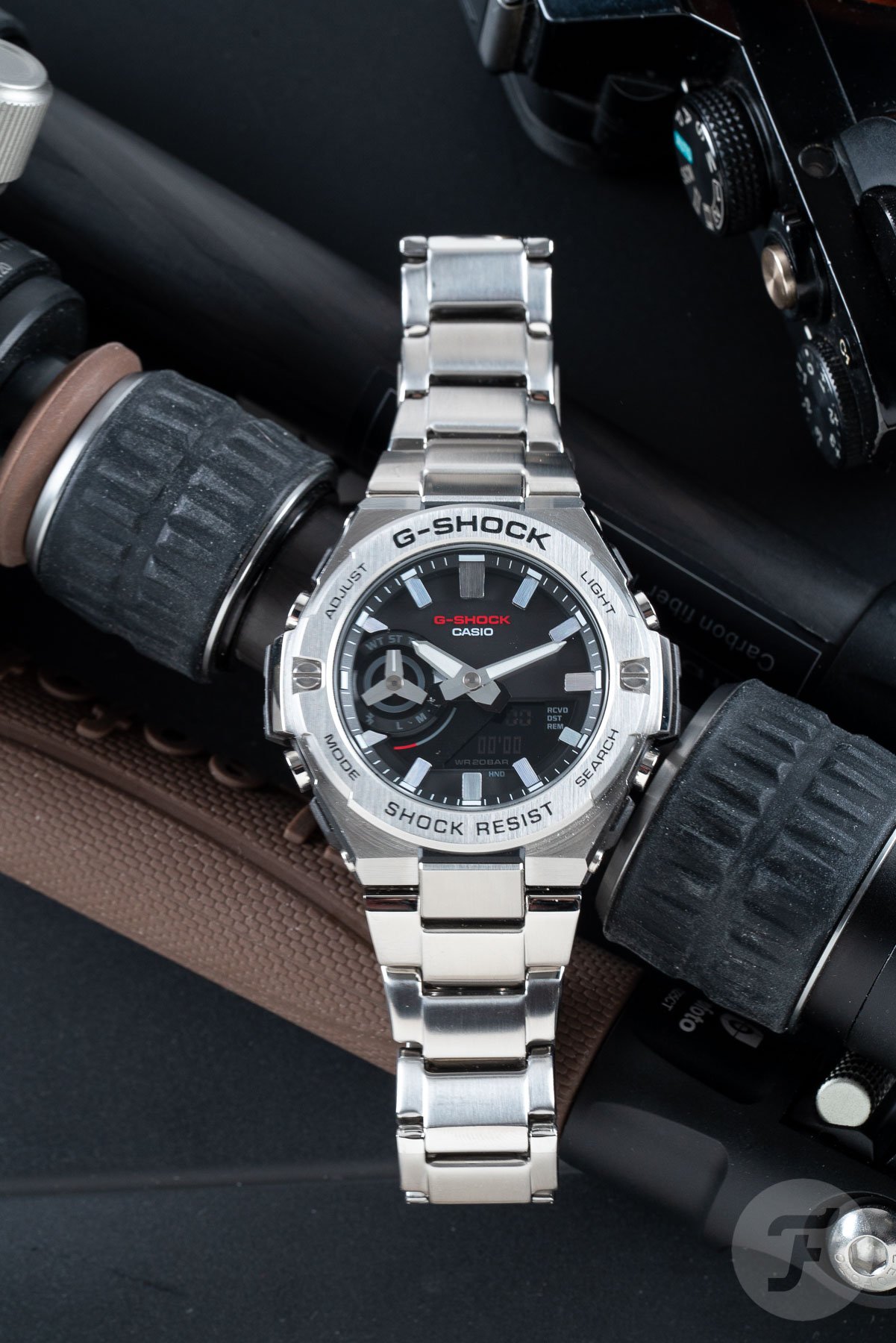 Then one day, after years of stuffing mechanical watches in my head, I came across the G-STEEL line. There was a mental block. No joke. I had to recalibrate my brain to have a space for it. A G-Shock in steel? Nah. Not until I saw the fourth generation did I start thinking, “Hmm…” That was literally just last year, as we reviewed the GST-B400-1AER. Seeing that on the wrist made the penny drop. 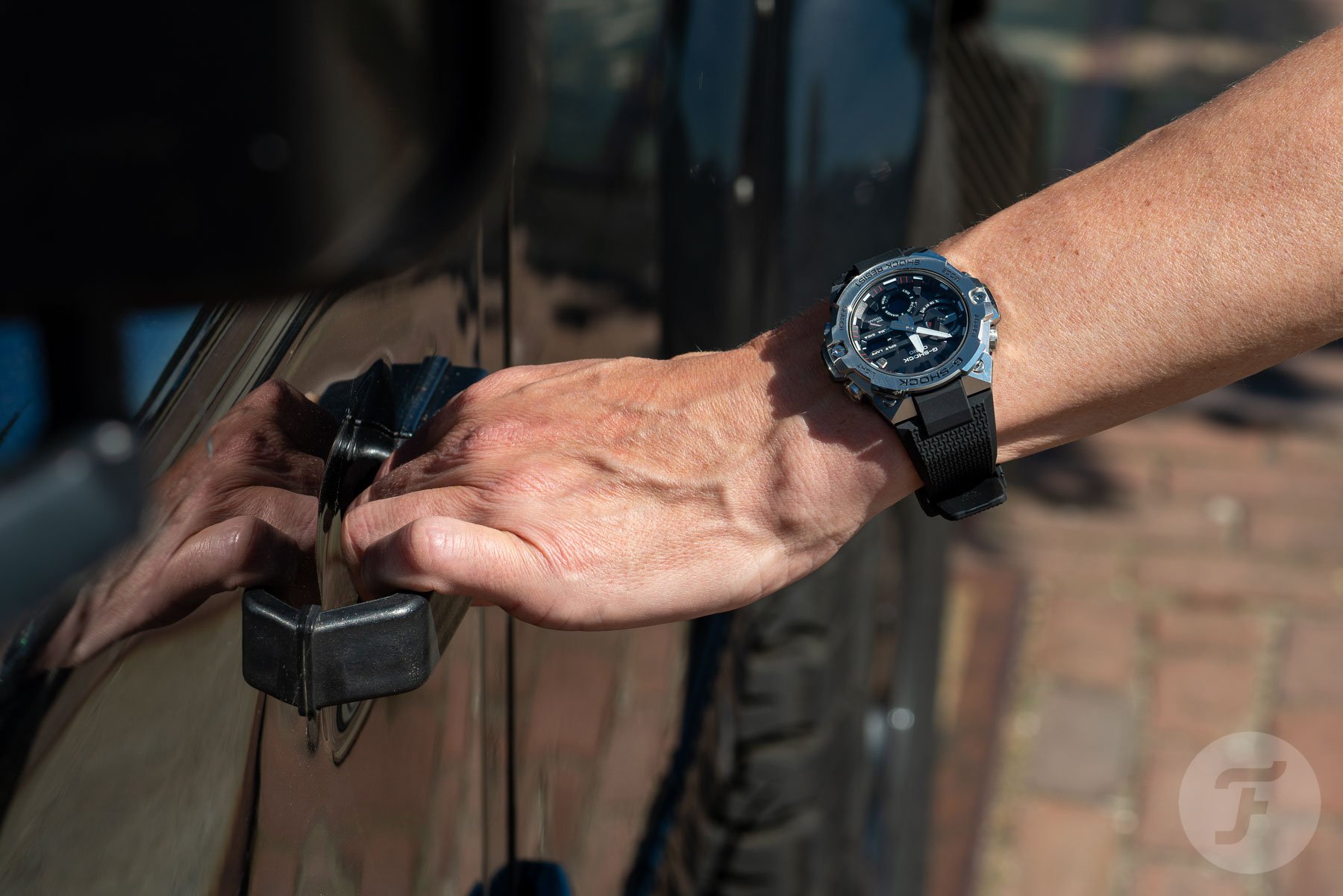 In its fifth generation, the G-STEEL has evolved into its best form so far. Measuring just 12.8mm from the back of the case to the top of the bezel, the new G-STEEL is 0.1mm thinner than its predecessor. The GST-B500D-1A features G-Shock’s trademark toughness to protect the core against shock, which is bolstered by a dual-layer case construction of metal and carbon-fiber resin. This unique structure not only benefits from the strength and lightweight nature of carbon but also the quality of metal.

The compact casing houses the ultra-thin module 5684, enabling the latest and greatest G-Shock technology for timekeeping and precision operation. Thanks to its smaller components and high-density mounting, this module is even slimmer than the one used in the previous version. Another new feature of the 5684 module is its ability to sync with the “CASIO WATCHES” mobile app via Bluetooth connectivity (rather than the “G-SHOCK Connected” app in prior models).

While you cannot see all that is going on inside the carbon core guard, you can definitely admire an array of metallic surface textures on the outside. The stainless steel bezel is treated with five contrasting finishes across different facets, offering the watch a relatively sophisticated exterior. The robust watch case is further complemented by a steel bracelet with a three-fold safety clasp to complete the look.

The best enhancement of all in the new G-STEEL, in my mind, is the streamlined dial layout. The GST-B500D-1A features a hybrid dial that is much better organized for the digital readings, and it looks a lot cleaner than before. And if you are aware of Casio’s recent smash hit, the “CasiOak”, you might have even done a double-take. (If you’re not, take a look at the CasiOak we shared last year) The new dial clearly has a familiar face, judging from the circular sub-dial position, the digital display aperture, and the chunky indexes. 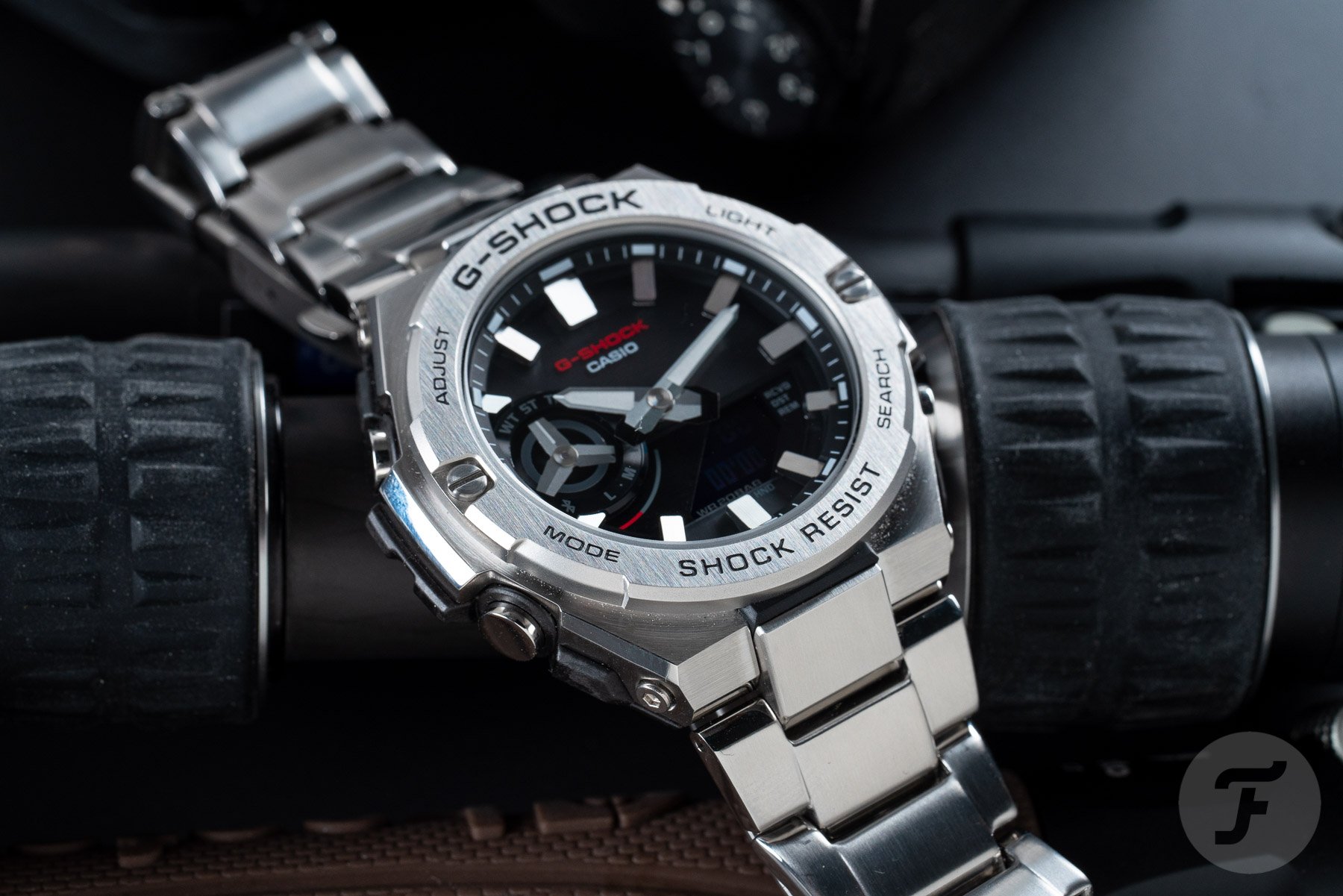 The dial is protected by a mineral crystal. For the analog part, the GST B500D-1A only employs hour and minute hands, which allows the hand-stack to be shorter. Not only that, the hands can move out of the way at the push of a button, to allow an unobstructed view of the sub-displays. Now, isn’t that just mechanically smart, even before we get to the “connected-smart” functions! In addition, the hands are coated with lume, and a double-LED light for the main dial and digital display aids legibility in dark conditions. 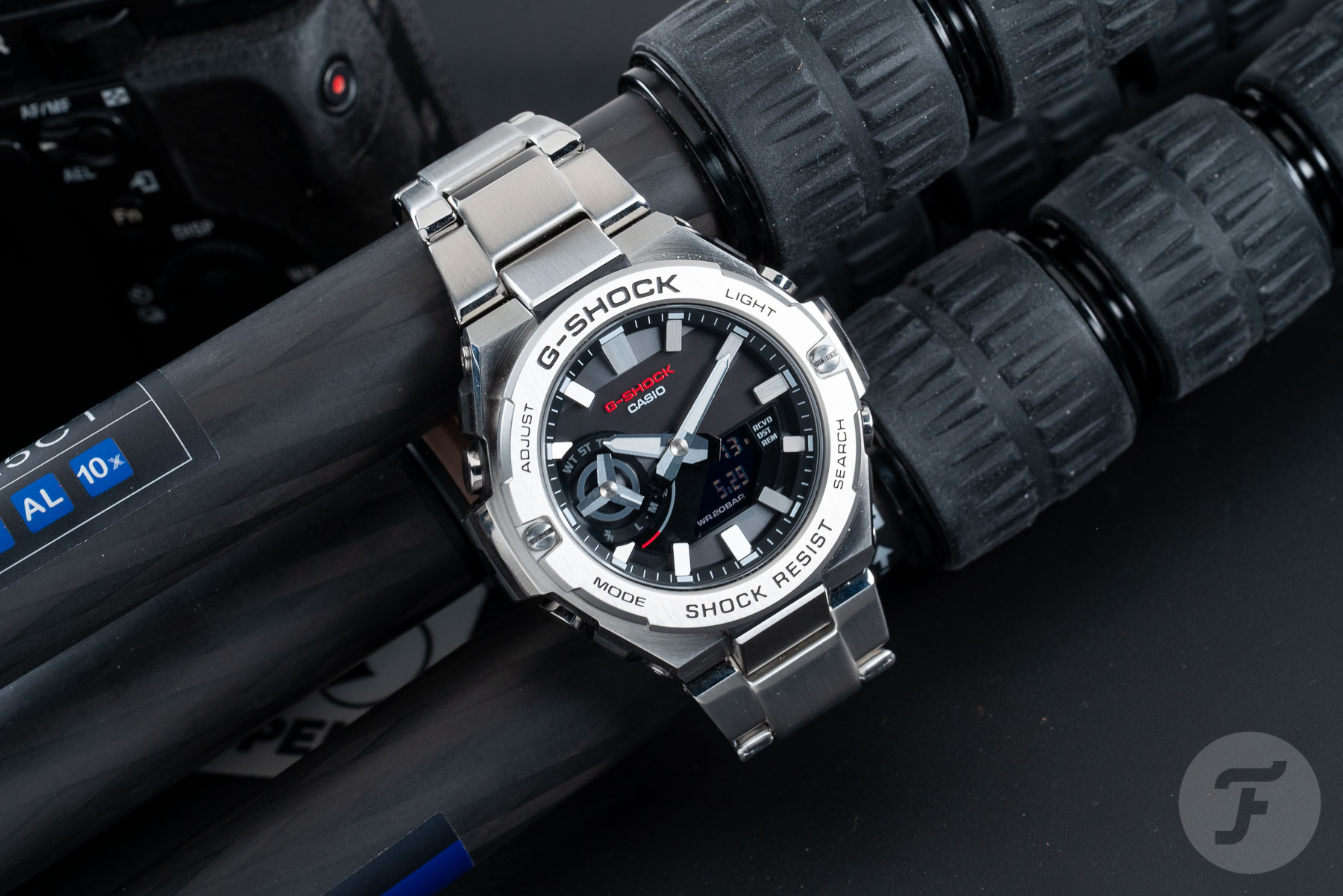 For the digital part, the display provides readings of the date, day of the week, time in 12/24-hour format, five daily alarms, as well as essential timing and stopwatch functions, among others. The user can ever set all of these via the mobile app. The sub-dial at 9 o’clock shows the selected mode of operation, charge level, and smartphone-connection status.

Most functions and smart features in the GST B500D-1A are those you have come to expect from a G-Shock — 200 meters of water resistance, energy-saving, language selection, phone finder, world time of approximately 300 cities in 38 time zones, and a full auto-calendar running to the year 2099. 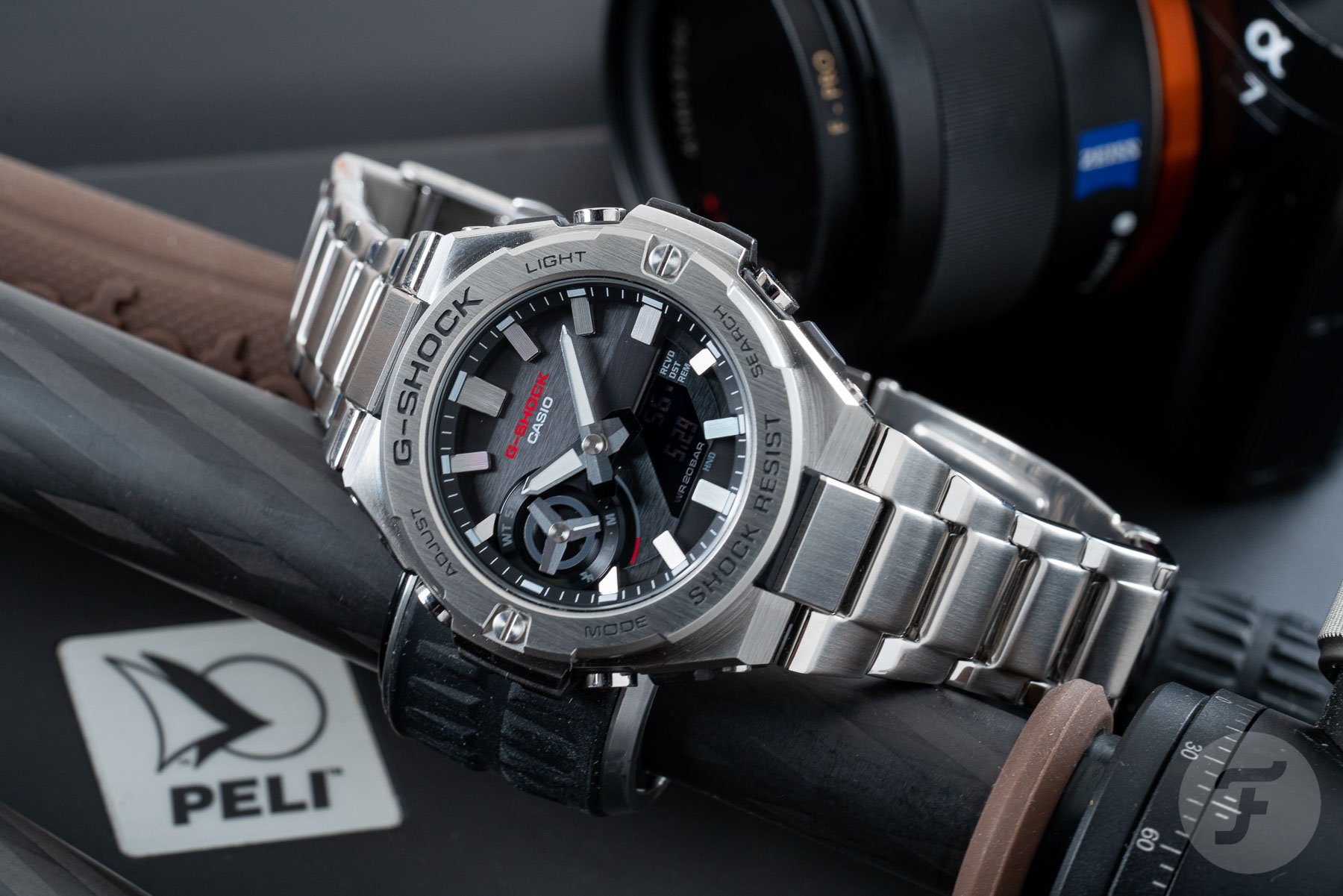 Last but not least, the new G-STEEL is solar-powered. The Tough Solar battery inside the watch is rechargeable via natural and artificial light, boasting seven months of run-time after a single charge. That means you don’t have to worry about battery unless you live in a cave!

The case measures 48.9mm from 9 to 3 o’clock, making the Casio G-Shock G-STEEL GST-B500D-1AER a large watch on paper. It’s counterposed, however, by the downsized button guards shielding slim and easy-to-operate pushers. Furthermore, its reasonable lug-to-lug of 46.6mm and its lean profile certainly aids in everyday wearability. 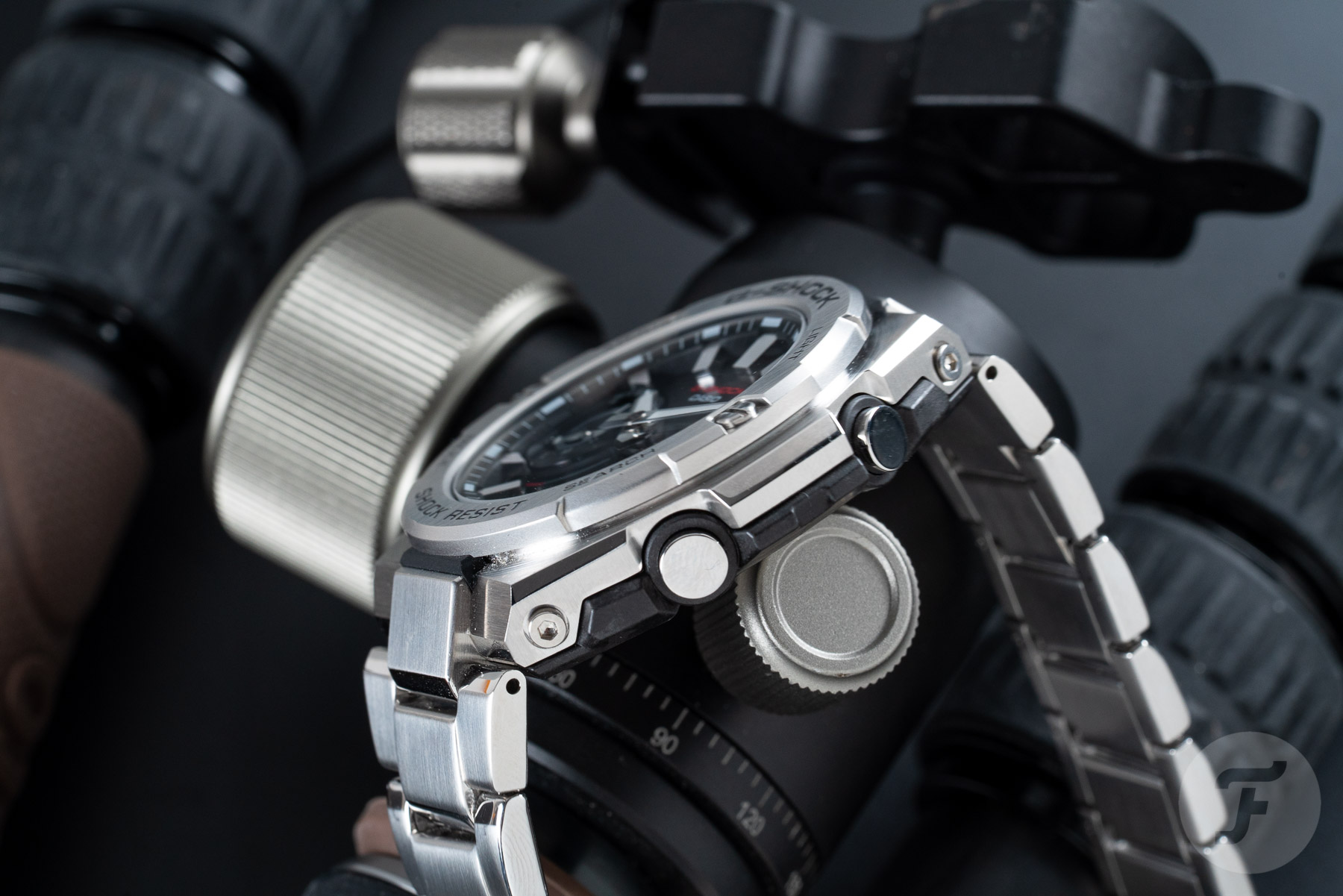 The Casio G-Shock G-STEEL GST-B500D-1A excels in providing G-Shock’s typical high durability. It has basically everything you need in an active/sports watch, characterized by its multifunctionality, smart connectivity, and sleek design. It appeals to those who may want a dressier or business-casual look from a G-Shock that isn’t too expensive. And to be honest, for €299 at retail, you are getting a lot of watch. With each new update still evolving and refining as a quantum leap, Casio is evidently pouring in resources to push the G-STEEL line to be the best and most relevant product it can be.

Learn more about this model and other variants in the GST-B500 series on Casio’s website. And as always, let us know what you think in the comments below!