Today, on Fratello Watches, we’ll take a look at the Borealis Portus Cale, a diver’s watch from a micro brand based in Portugal. We’ve featured a number of watches from smaller brands such as Straton, Gruppo Gamma, and Zelos, but Borealis is a new one for us. When heading to the company’s site, the company, whose name is defined as “the North”, states it prides itself on selling affordable, well made watches in a variety of case materials and with either Swiss or Japanese movements. As for styling, just a brief look at the offerings shows that they’re quite tool/dive watch focused. 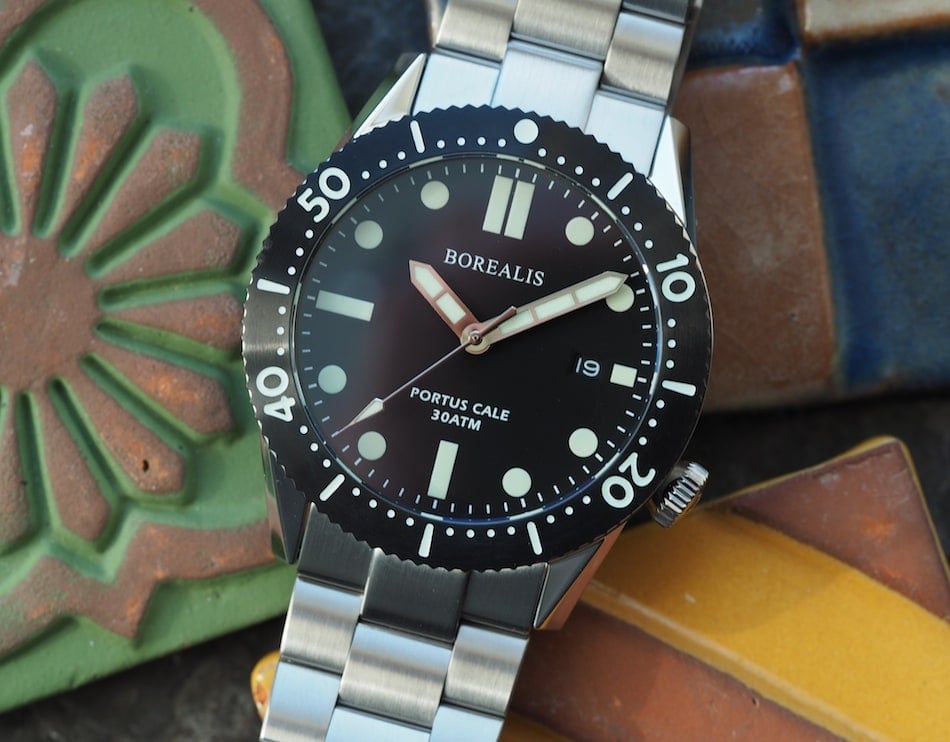 Borealis approached me via the Facebook Diver’s Watches Group – where Fratello Watches often writes articles for pieces introduced for the forum – as they’d announced an Omega Seamaster 300 homage watch with the “DW” logo on it. Instead, though, they asked if I’d take a look at a watch that’s currently available on pre-order and should deliver in June: the Borealis Portus Cale. If you’re curious, Portus Cale is the name of an ancient town in Northern Portugal that’s comprised of 11 municipalities including Porto. So, we have the brand name referring to the North and the model name referring to part of Portugal. 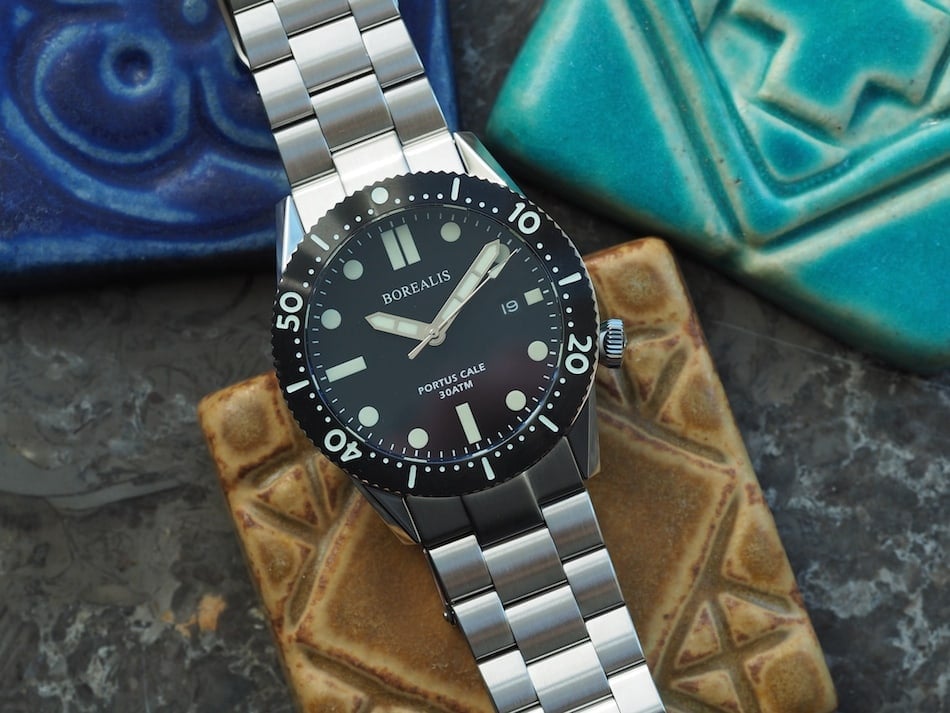 Spec-wise, the Borealis Portus Cale brings a stainless case with a 41.5mm diameter, is 48mm lug to lug and has a 22mm lug width. It has a sapphire crystal with anti reflective properties, a 120-click unidirectional PVD-coated bezel, 300M of water resistance, and a screw-down crown at roughly 4:00. A steel bracelet with micro adjusting clasps and screw-adjustable links (yay!) is standard.   The watch can be ordered with or without date, and in blue, black or white dial colors. Inside, sits the slim, Miyota 9015 automatic, which runs at 28,800 bph, contains 24 jewels, hacks and has 42 hours of power reserve. If this sounds like a decent lineup, you’ll probably smile when you hear that the watch can be yours for the sum total of $320 plus shipping/VAT depending on where you are. 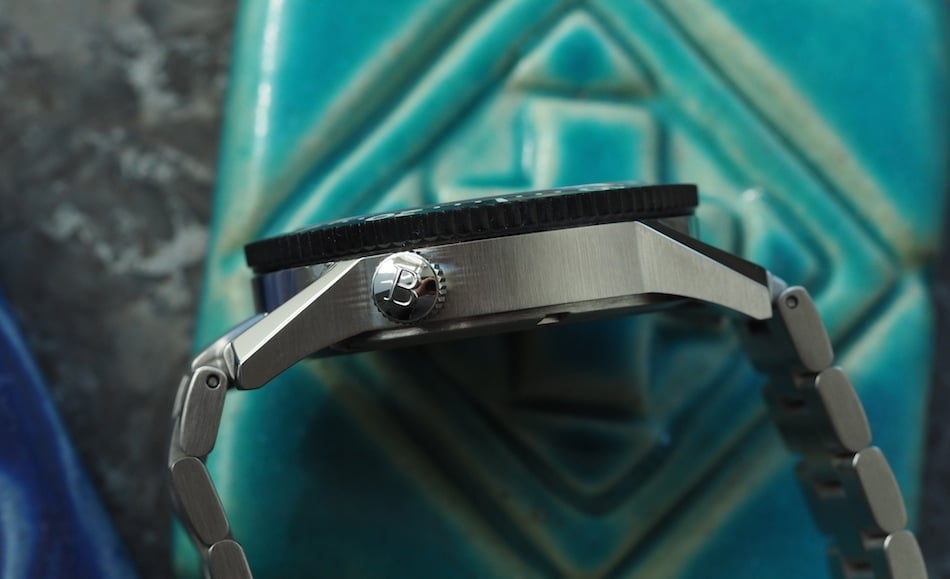 One thing to note up front is that the Borealis Portus Cale I received is a prototype. As mentioned, production pieces won’t ship for a few more months. That being said, this was a nice piece to behold. With a lot of micro brands, the real compromise on cost is found in the case design and finishing. For sure, the Portus Cale exhibits a bit of that, but it’s well masked. Yes, the case sides are flat, but they show vertical brushing that helps break things up. I’ve encountered a number of micro pieces where the sides are polished and this looks a lot better. My only minor complaint is the lug of drilled through lugholes. 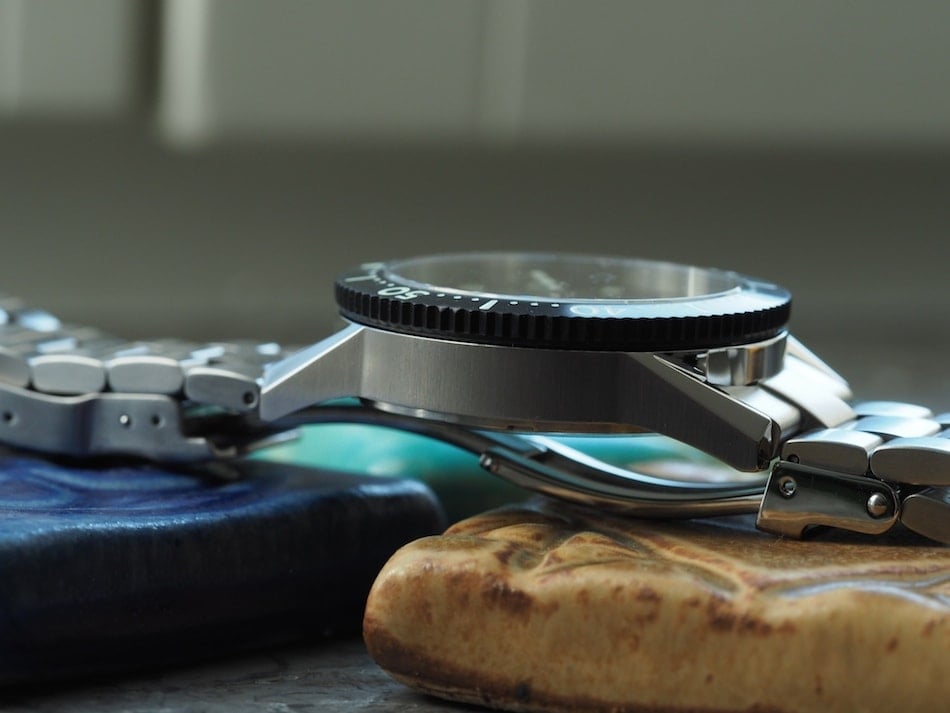 Additionally, you can see that the lugs bring in a couple different polished and chamfered surfaces to help break up the design. From the topside, this also helps slim down the watch. On the backside, you can see the fairly basic, stamped, logo and some information. It’s not overly elaborate, but there’s nothing to complain about either. 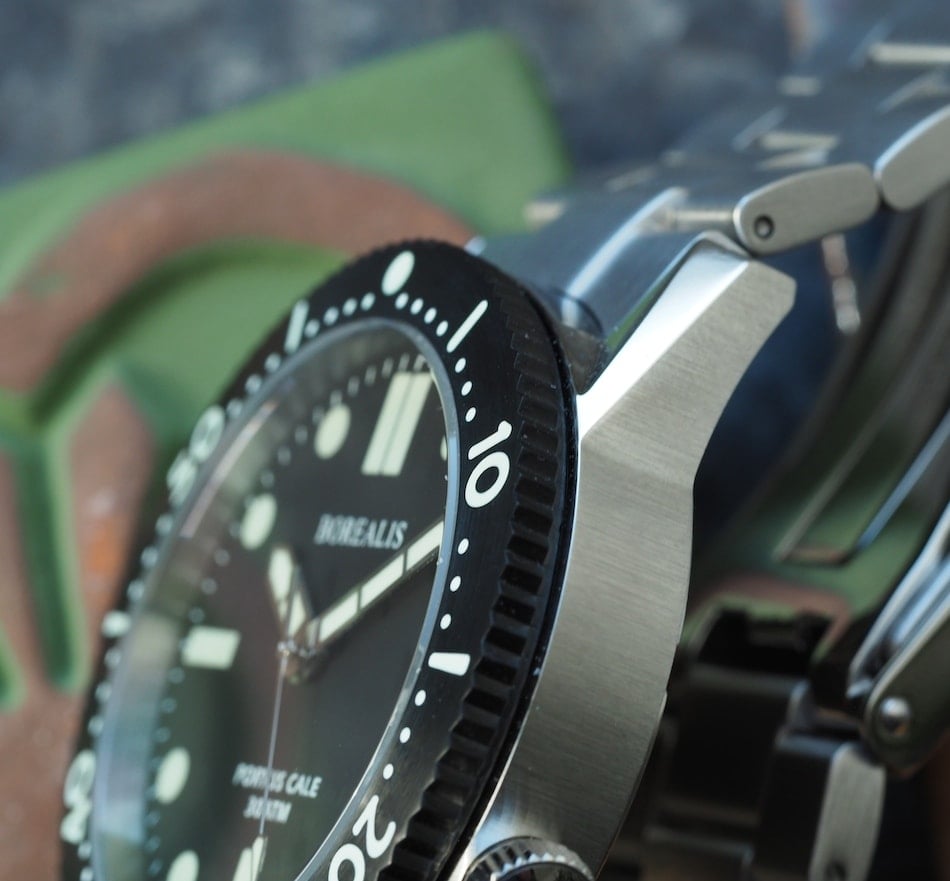 When it comes to the dial of the Borealis Portus Cale, the brand used some tried and true diver’s attributes to create an attractive and legible dial no matter the lighting. On the latter point, while I didn’t capture it, the SuperLuminova used on this watch is unbelievably bright! As mentioned, the style is bold and Borealis chose printed circles and rectangles for its hour markers. As stated, the watch can be specified with or without date, but as you can see, the date is unobtrusive. The hands remind me of a lot of 1960’s divers from smaller brands and there’s a fine, arrow-tipped sweep seconds hand. 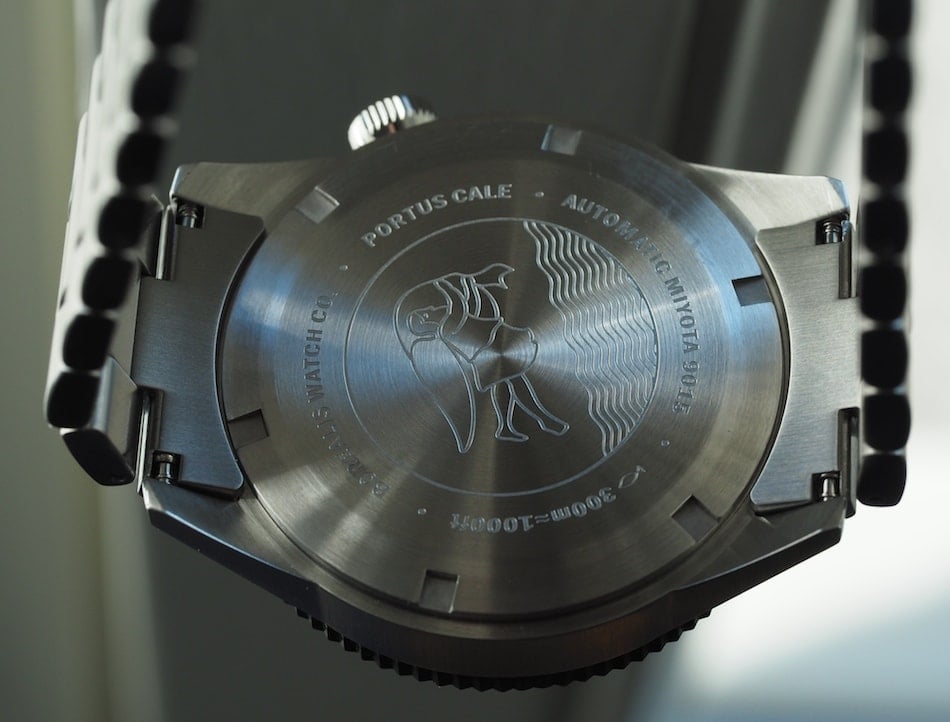 Bezel-wise, the Borealis Portus Cale contains a PVD-coated 60-minute indicator. We’ve seen all black bezels on other watches, including the Oris Sixty-Five. For me, I like a black insert with a stainless surround, but I can guess that this is a slight concession to cost, as it’s much easier to deal with a single piece. Here again, though, the bezel markings and the pip glow like a lantern in the dark. I also found the bezel action to be firm enough and there was no play. 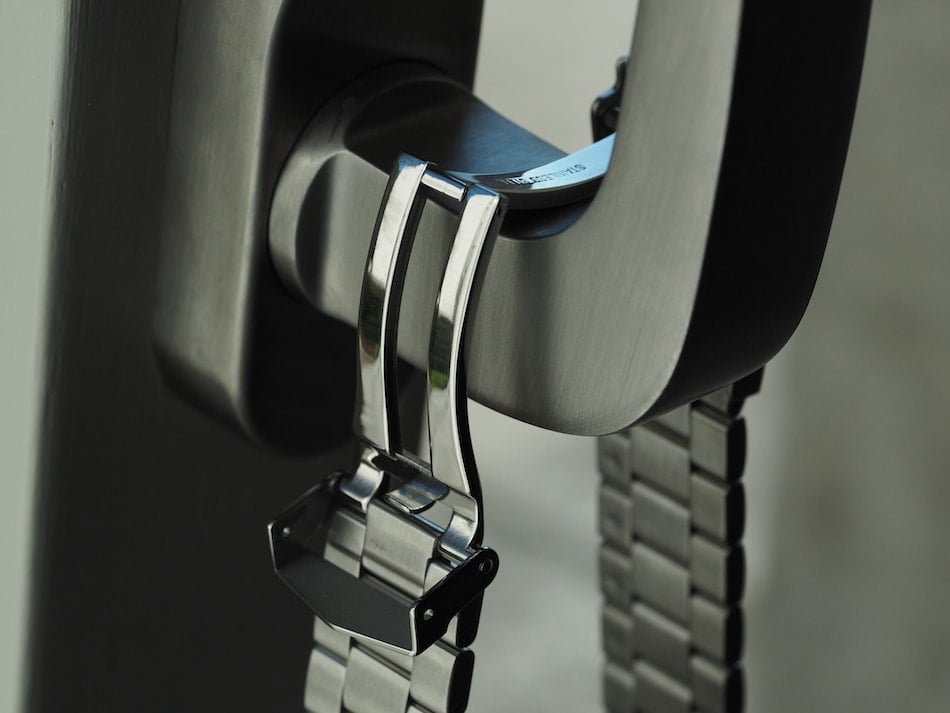 When coming to the bracelet on the Borealis Portus Cale, this was also a nice surprise due to its weight, solid end links, smoothness and the use of screws in the links. The clasp is a decent stamped affair that reminds me a lot of what you’d find on a Seiko. So, it’s nothing to brag about, but it’s functional and does the job. 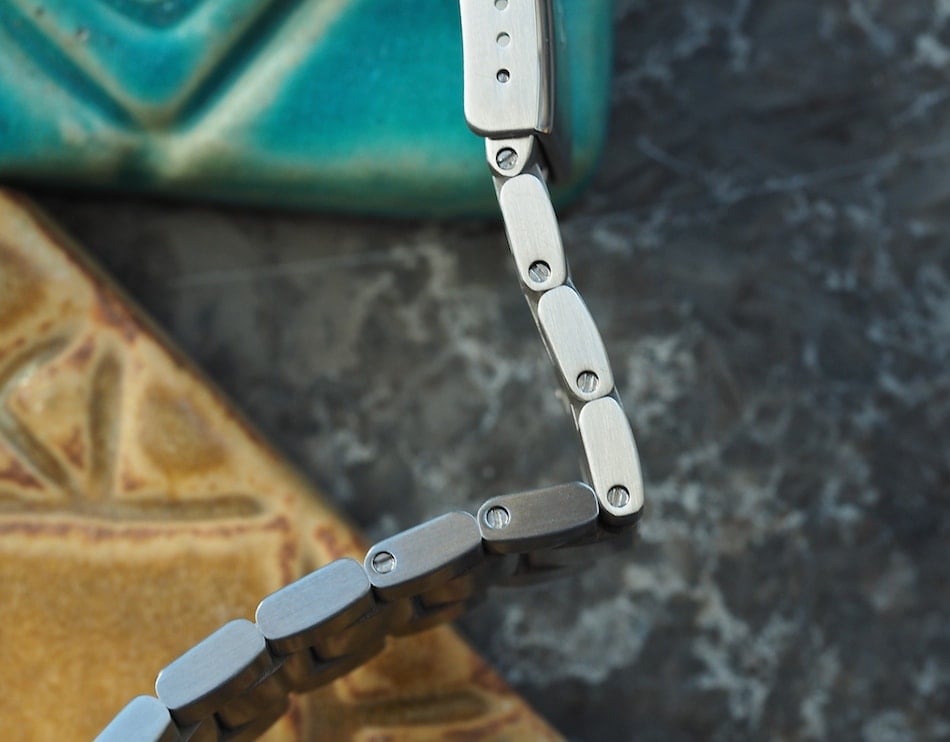 The bracelet contains 4 microadjustments on the clasp that are used with a pin. What I was missing – although I’d never use it – is the typical wetsuit extension found on most dive watches. 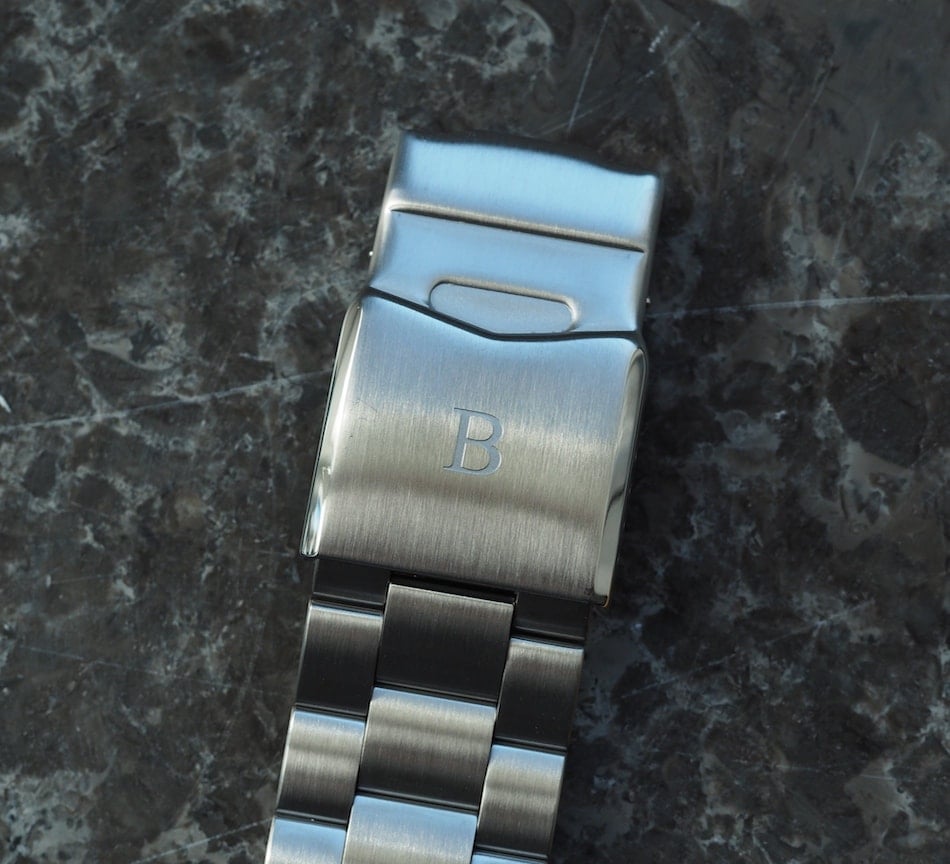 On the Borealis Portus Cale, a Miyota 9015 was chosen. I think this is my first hands-on experience with this movement. We’re seeing this pop up more on more across all sorts of brands and not only the micros. Examples of users are MesiterSinger, Pinion, and so many others. It’s a movement that’s lauded for its thinness and reliability. I certainly didn’t test the timekeeping, but I didn’t note any gaps either. Winding was relatively smooth, although I found the crown to be bit wobbly when unscrewed – likely nothing to do with the movement. Say what you will about the use of a non-European movement, but at least it’s in a highly affordable example in the case of the Borealis. 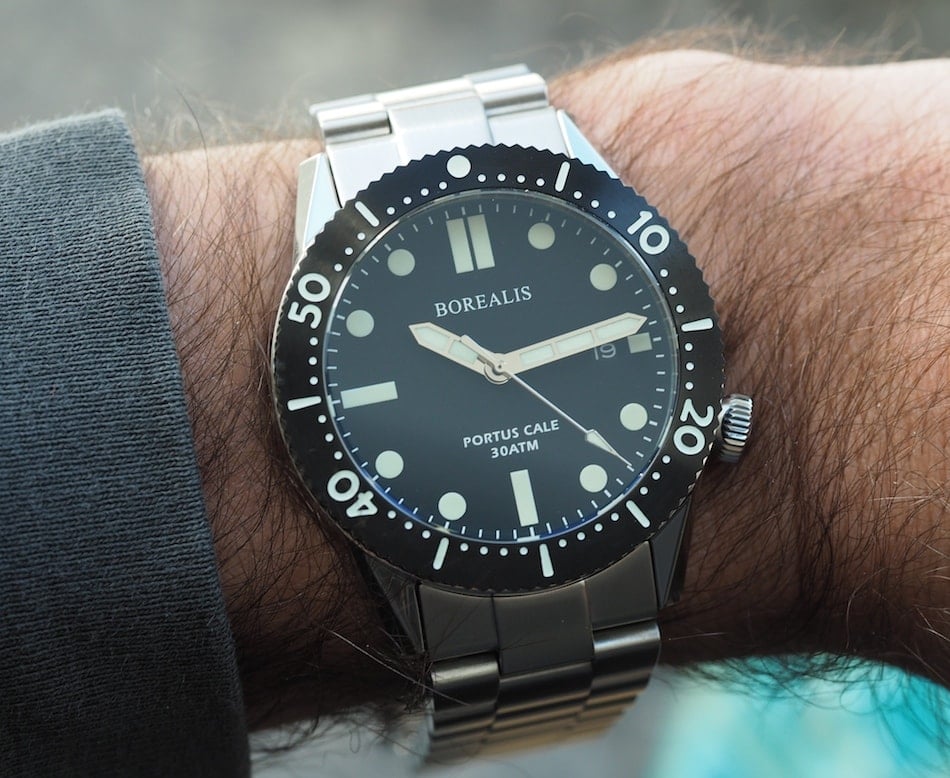 The Borealis Portus Cale isn’t a lightweight watch on bracelet, but it wasn’t uncomfortable either. With its 48mm lug-to-lug and sane thickness, it was also decent on the wrist. It’s quite vertical, though, which might make it a touch awkward to “slide” under a long-sleeved shirt. I can imagine this watch would like nice on a number of different strap options as well. 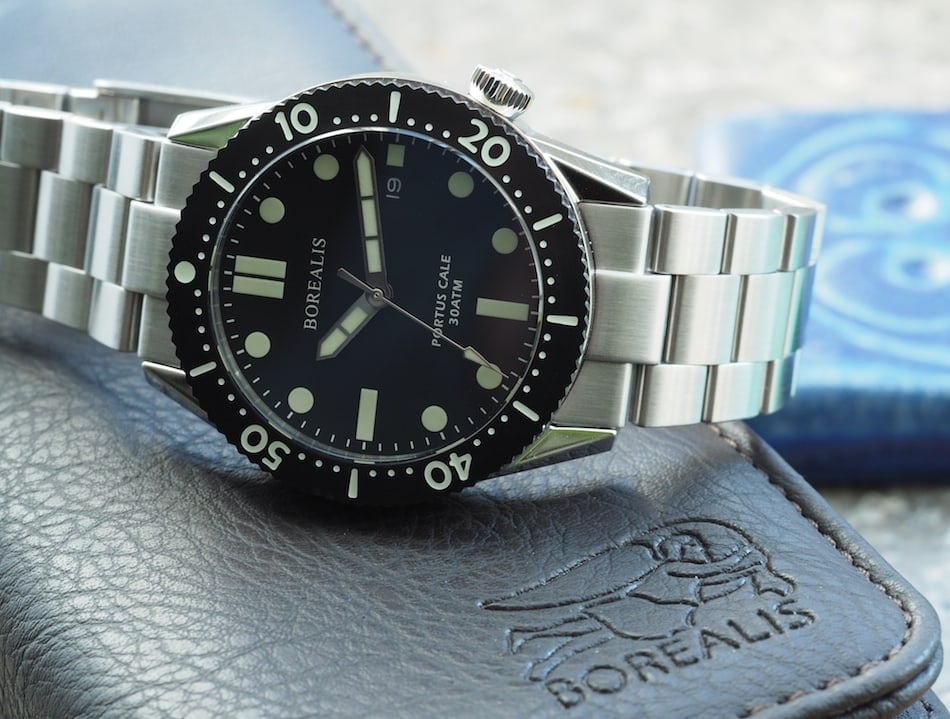 Overall, the Borealis Portus Cale is a very different option to consider in the entry level, but highly spec’d dive watch market. In this field, and if you want something mechanical, you’re likely considering pieces from the likes of Seiko, maybe Citizen, other micro brands, or used watches. There are definitely those out there who like to be different than the masses that sport SKX007’s or Turtles and the Portus Cale certainly ranks as a worthy choice. After all, you can’t complain about the specs, pricing or the color options.   And, hey, Summer is finally on its way and that’s often reason enough to add a new dive watch to the collection.

For more information on the Borealis Portus Cale including options and pricing, head to the company’s official site.

Hot Topics
Sorry Tudor, It’s Not You, It’s Me… But I’m Selling My Black Bay Fifty-Eight
157 comments
Dear Watch Fans, Why So Angry? — Don’t Let Your Passion Get The Better Of You
97 comments
Hands-On With The Polarizing Tudor Black Bay Pro
69 comments
The Unexpected Perfect Two-Watch Collection — Rolex Sea-Dweller And Day-Date
69 comments
Introducing The New Fortis Stratoliner — Tested For Space Travellers
57 comments
Popular
Rolex GMT-Master History And Overview Of All Major References
Robert-Jan Broer
16
(From The Archives) Shut Up & Read The Truth About Cartier Watches
George Cramer
21
Grand Seiko SBGA211 ‘Snowflake’ And Why I Didn’t Buy It
Robert-Jan Broer
22