Only a few months ago, Christie’s had their Omega Speedmaster 50 Auction held in New York City with a 100% selling rate. This time, Christie’s is having an online auction (that still runs for almost 3 more days) with some incredibly nice Omega watches. Not only Speedmaster pieces, also Seamaster and Constellation pieces for example. There are 26 lots in total, that you can find here, I am not sure why all of them are considered to be rare Omega watches, as some of them can be fairly easy found on eBay and Chrono24. However, some of them are very interesting and in some cases even unique, definitely worth a look.

Although one of them is even a flown Speedmaster, a X-33 model previously owned by Russian cosmonaut Sergei Zalyotin, who wore it on missions to both the Mir and International Space Stations, my personal favorite is probably one that you wouldn’t expect from me.

It is the Omega Constellation, reference 2852 / 2853 SC. My love for Omega, and perhaps watches in general, started with the Omega Constellation. Actually, it is today, the 6th of February, exactly 47 years ago that my grandfather bought his Omega Constellation. I inherited his watch, the watch that I always admired as a kid (and still do) and luckily he kept the box and papers (stamped Feb 6th 1969) safe in all those years. So, the Constellation is to blame my love for watches and Omega for a big part. It used to be the flagship of the Omega collection (as it seems the Globemaster is now, read my in-depth review of it here), with its high-precision movements and beautiful case and dial designs. This Constellation reference 2852/2853 SC is just a stunning piece and makes me wonder why the collector’s market for these Constellation is still so relatively small.

This particular Constellation is not only beautiful, it also has an interesting history that makes it a perfect fit for this rare Omega watches auction. The story goes that it was, according to the consignor and original owner, a gift presented to him by His Highness Sheikh Sir Salman II bin Hamad al-Khalifa, Ruler of Bahrain, KCMG, KCIE, KStJ, ruler of Bahrain. Frankly, that probably does add value to the watch, but for me, it is the watch that counts. What a beauty! 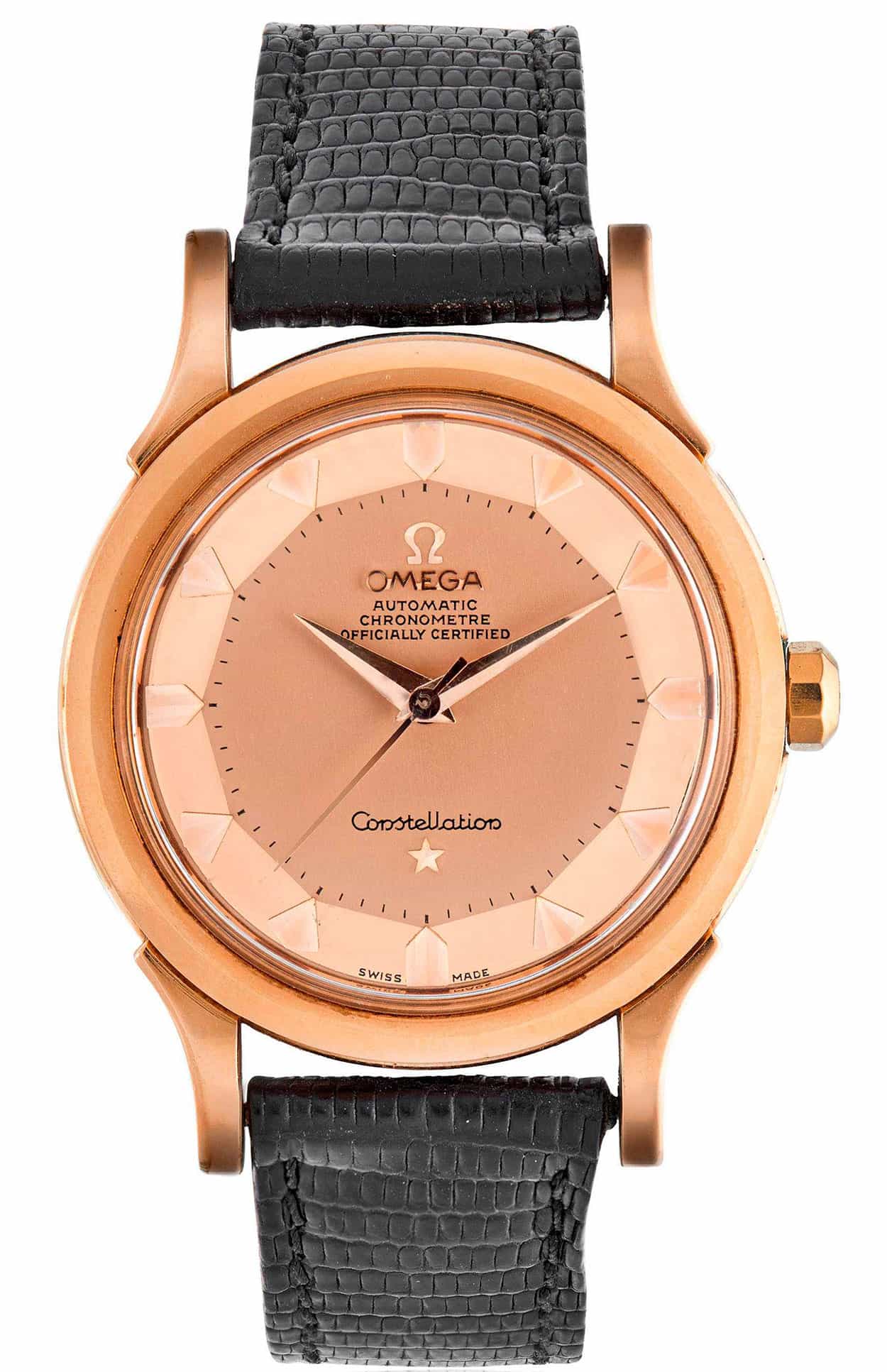 This early Omega Constellation is from 1957, which means it already has a movement with normal rotor (instead of the bumper rotor that was used for the first years of the Constellation (1952)). It is the copper gilded caliber 505, a time-only movement that was later on succeeded by the 55x caliber movements (the 56x movements had a date feature as well). I personally love these movements, not only because they are very pleasing for the eyes, but also because of their built quality. When I pick up one of my caliber 55x and 56x Constellations, they start running within a few moments (most of the time I even don’t need to shake them gently, picking them up is enough) and I have never experienced any issues or repairs with any of them.

The dial, as you can see, is the so-called pie-pan dial with arrow shaped applied gold markers and the watch has dauphin hands. This Constellation has a 35mm pink 18 carat gold case with beautiful elegant lugs. Like all Constellations of that time, it has a gold medallion on the case back showing the Geneva observatory with 8 stars.

Hot Topics
Introducing: The New Seamaster Professional 300M 60 Years Of Bond — With A Special Animated Case Back
105 comments
Introducing: The Oris Divers Sixty-Five Fratello Limited Edition
104 comments
Are You Still After An Omega × Swatch MoonSwatch?
104 comments
It’s Time To Invest In A Dress Watch — Our Picks From Breguet, Omega, Grand Seiko, And More
74 comments
The Rolex Waitlist Conundrum — How Much Will The Price Of Your Watch Increase While You Wait?
50 comments
Popular
Two Patek Philippe Nautilus Watches: 3700/1A Versus 5711/1A
Robert-Jan Broer
16
Rolex Submariner Hulk versus Seiko SLA019 : Shades of Green
Michael Stockton
27
Watches Of The King – Elvis Presley’s Notable Timepieces
Balazs Ferenczi
9