Who could ever imagine a Ferrari that’s just 1.75mm slim, a chronograph called Grönograaf, or a partly upcycled Zenith?
Lex Stolk
comments 8
Share

After reading this article, you will have a very thin story to tell in the coffee corner. It will be wafer-thin. Just 1.75mm, in fact, but that’s record-breaking, so it’s also highly impressive. You will also be able to introduce a new word — Grönograaf. That’s the name of Grönefeld’s latest creation, the brand’s first-ever chronograph. And if you want to show your sustainable side, you could bring up the Zenith Defy Extreme E “Island X Prix” Edition, a watch made for an electric off-road race. The most sustainable part of the watch is the strap that’s made of old racing tires. What a great start to the week.

There’s a new world order. Not too long ago, the 1.8mm-slim Bvlgari Octo Finissimo Ultra took the crown from the 2mm Piaget Altiplano Ultimate Concept as the thinnest mechanical watch in the world. Last week, however, Richard Mille passed Bvlgari and took the lead with the UP-01 Ferrari, measuring just 1.75mm “thick”. That must have taken Bvlgari by surprise because, during the introduction of its then-record-breaking Octo, CEO Jean-Christophe Babin confidently stated that it would be a record that would stay in the books forever. Unfortunately for Bvlgari, its record only stood for a couple of months. Richard Mille “smashed” the record by a mere 0.05mm. Yes, the world of watches can be a hard and cruel place. 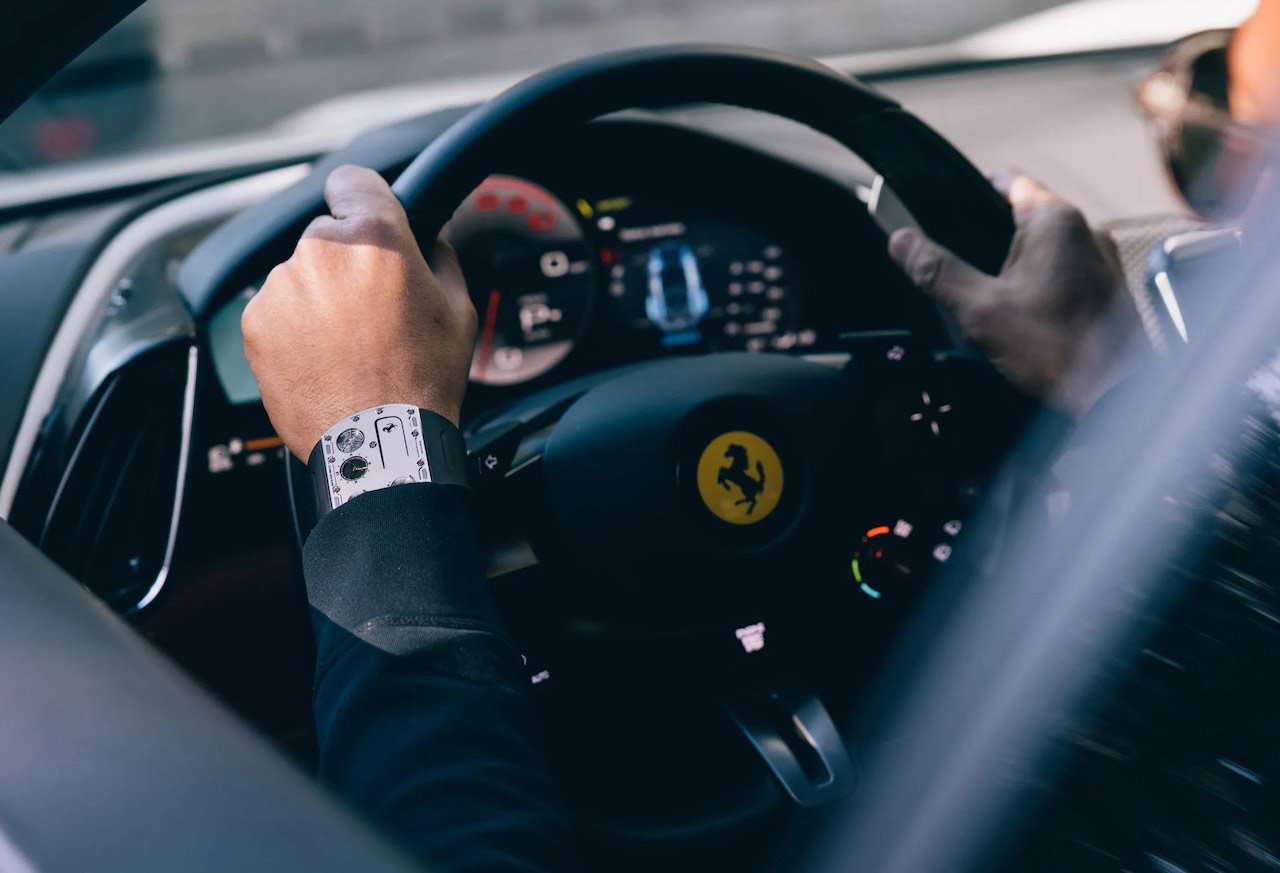 Feeling slim in the coffee corner: Richard Mille UP-01 Ferrari

Anyway, back to the UP-01 Ferrari itself and what goes on inside the case. Yes, you read that correctly — inside the case. Whereas Piaget and Bvlgari each chose to construct a movement with a base plate that doubled as the case back, Richard Mille built a 41.45 × 28.85 mm movement with a height of 1.18mm that sits inside a case. Does that mean that there is still room for improvement? Possibly, but “RM” did choose the more traditional construction for a reason — better shock resistance. Indeed, the watch can withstand accelerations of over 5,000 Gs. The hand-wound caliber RMUP-01 has a skeletonized base plate and bridges in an alloy that is 90% Grade 5 titanium, 6% aluminum, and 4% vanadium. The movement parts are also in a category of their own. The hyper-flat escapement, for instance, is a new and patented design.

How does it float on the wrist?

With a total weight of 30 grams — that includes the strap — the UP-01 Ferrari doesn’t sit on the wrist. Instead, the 51 × 39mm watch kind of floats on the wrist. The 13 visible Grade 5 titanium spline screws on the top are a distinct Richard Mille design feature. They are far more recognizable than the faint hint of the classic RM tonneau design, now rotated 90°. And apart from giving this odd-looking watch a bit of a familiar face, the screws also help give the watch 10 meters of water resistance. Interestingly, the case parts are so thin that they are machined in Richard Mille’s movement department to meet the extreme machining tolerance of a single micron. It’s all very impressive, for sure, but what about the visual impression? Do you like the looks of the new record holder? How would you rank the current ultra-flat top three based on looks?

For more information on the RM UP-01, please visit the official Richard Mille website. 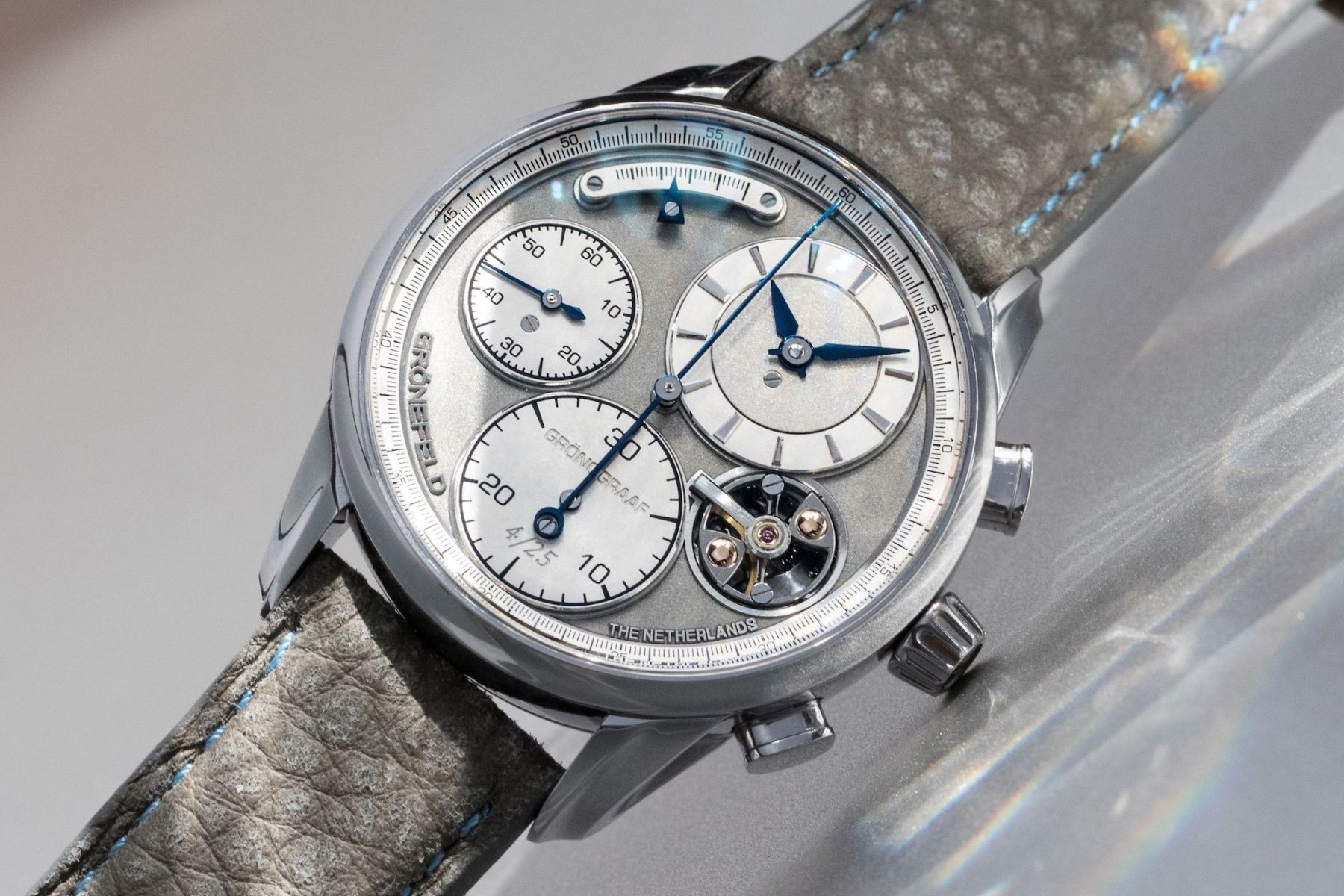 Playing with words in the coffee corner: Grönefeld 1941 Grönograaf

Tim and Bart Grönefeld showed me a prototype of a chronograph during Watches And Wonders earlier this year. When Bart revealed the name of the Horological Brothers’ latest creation, he had a big smile on his face. The Grönograaf is a word joke that puts a frown on the faces of contemporary marketing experts. Nevertheless, the brothers insisted that it was the name they chose, and they stood behind it. Honestly, they could have named the watch anything they wanted because it is simply mind-blowing. The Oldenzaal-based brand’s first-ever chronograph is a very impressive watch in more ways than one.

The “Premiere Edition” of the 1941 Grönograaf, for instance, comes in tantalum. That’s a rare and heavy metal from the vanadium family that has a lot in common with platinum in terms of color and weight. This edition is limited to just 25 pieces. Grönefeld will also release 188 pieces in stainless steel, a far more common material. The already-sold-out Grönograaf in exotic tantalum weighs 108 grams and costs €165,000 before tax. And the steel version, which weighs 88 grams, has a price of €155,000. In other words, you pay just under €1,528 per gram for the tantalum Grönograaf and a little over €1,761 per gram for the steel one. Now, you tell me, which is the more exclusive Grönograaf — the more limited version or the one that’s more expensive per gram? 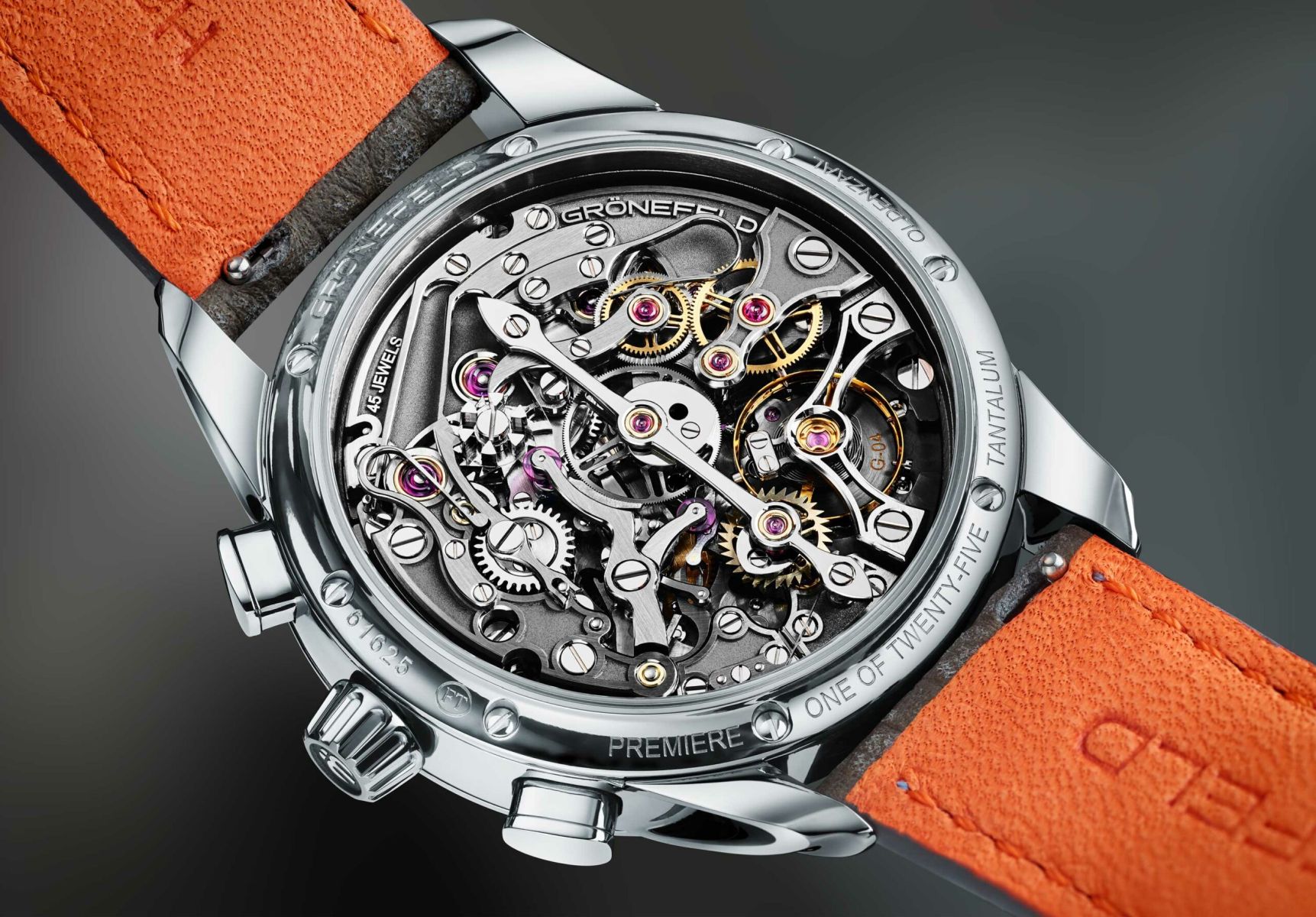 I don’t know how you answered that question. One thing I do know, however, is that if I were to ask all of you about the movement, all of your answers would be extremely positive. The 1941 Grönograaf may feature a classical configuration, namely a column-wheel and lateral coupling, but the 408-part caliber G-04 has a complicated and surprising trick up its sleeve. The centrifugal governor between 3 and 4 o’clock is part of that trick.

Time for a “soft reset”

The governor, which is more commonly used in repeater movements, is part of a “soft reset” mechanism. Because the centrifugal governor slows down the reset function, it is not only kinder to the movement, but it also provides an intriguing mechanical spectacle. You see, depending on the position of the heart-shaped cams for the chronograph’s counters, it spins clockwise or counterclockwise upon resetting for an unpredictable mechanical pleasure. And there’s more horological goodness to enjoy, such as the instantaneous jumping action of the 30-minute counter. I can’t but conclude that the Grönograaf is a peculiar Dutch watch delicacy that will satisfy even the most spoiled of watch gourmands.

To find out more about the unusual and fascinating Grönograaf, please visit Grönefeld’s official website. 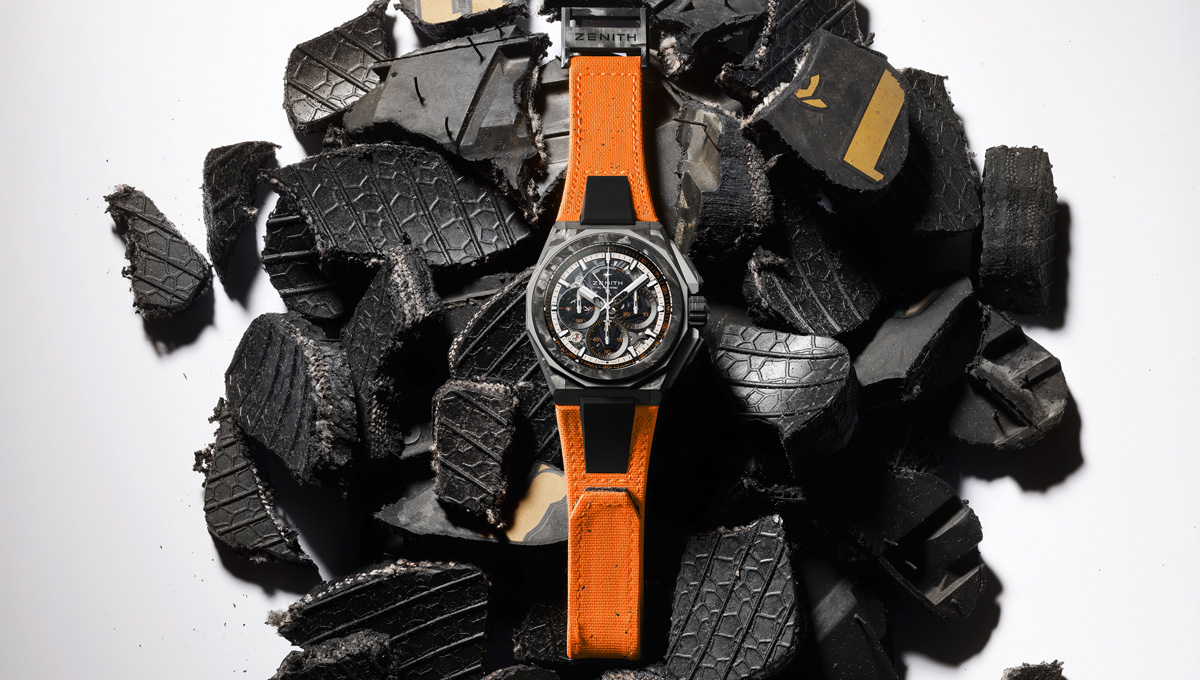 How do you like the buzz of sustainable electric-car racing? To be honest, I find it very hard to get excited because of the absence of combustion engines. The good thing about the Extreme E off-road racing series, though, is that there’s a lot of dust and spectacular scenery. Does that make up for the lack of roaring engines? Quite a bit, although I have to admit that watching an electric off-road race made me wonder whether my TV was on mute. Anyway, noise is a non-factor in the world of mechanical watches. So, what exactly is stopping me from enjoying the new Zenith Defy Extreme E “Island X Prix” Edition? 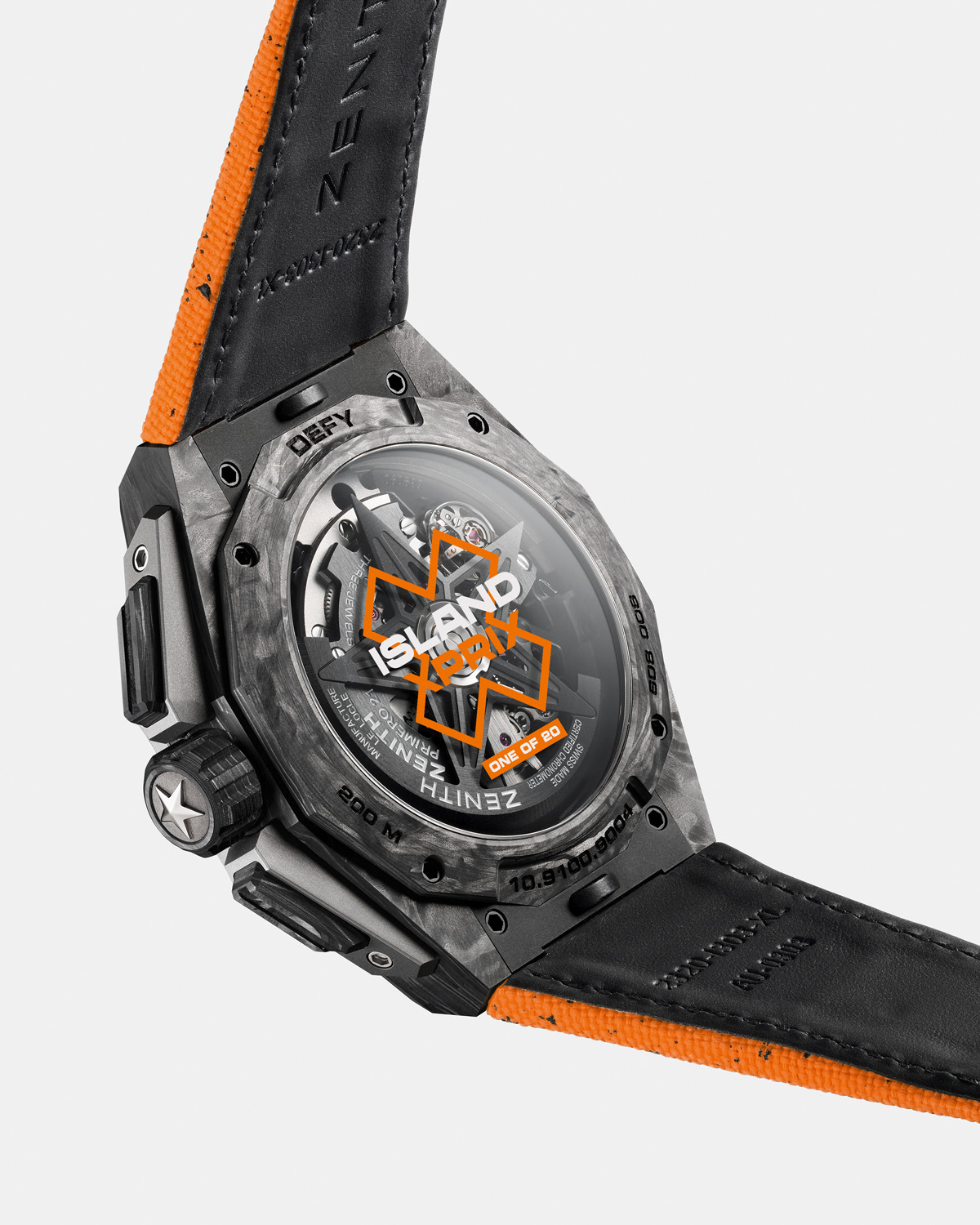 Exciting inside and out

It can’t be the open-worked, multi-layered dial embellished with bright orange accents (the official color of the Island X Prix race that took place in Sardinia last weekend). And the accompanying rubber strap made from recycled Continental CrossContact tires from the league’s first season is both cool and sensibly sustainable. Also, the 45mm case that pairs forged carbon fiber with micro-blasted titanium is quite the sight. And the same goes for the El Primero 9004, which beats at 5Hz for timekeeping and 50Hz for the chronograph function. In other words, there’s plenty to get excited about! That’s not the case, however, when it comes to the number of watches scheduled for production. The Defy Extreme E “Island X Prix” Edition is limited to 20 pieces, and it retails for $27,100 USD.

In case you’re wondering why I’m wearing the latest iteration of the Omega Speedmaster Moonwatch Professional on a NASA strap, tomorrow, the report about last week’s Speedy Tuesday event in Milan will be online. You should definitely check it out. For now, enjoy your watch talk in the coffee corner, and have a great week, everyone.

Hot Topics
Introducing: The New Seamaster Professional 300M 60 Years Of Bond — With A Special Animated Case Back
102 comments
Are You Still After An Omega × Swatch MoonSwatch?
74 comments
It’s Time To Invest In A Dress Watch — Our Picks From Breguet, Omega, Grand Seiko, And More
70 comments
Sunday Morning Showdown: The Tudor Pelagos Provocation — Pelagos Vs. Pelagos 39
55 comments
The Rolex Waitlist Conundrum — How Much Will The Price Of Your Watch Increase While You Wait?
48 comments
Popular
A Question From A Reader: “Which Modern Speedmaster Is Closest To The Original Moonwatch?”
Robert-Jan Broer
14
Top 10 Rolex Watches – Overview of Models Favoured By Our Readers
Fratello
24
Rolex Submariner – Historical Overview Of A Diving Legend
Robert-Jan Broer
22