Piaget Adds A Dark Mode To The Altiplano Ultimate Concept

Tell me, are you an avid user of “dark mode” on your electronic devices? Personally, I set my devices so that they change from light to dark mode automatically based on the sunrise and sunset. And you’re just like me, you must be very happy that Piaget has just given you the option to do the same with your Altiplano Ultimate Concept (AUC). Whereas the previous two versions were both light-silver-colored, Piaget has now introduced a dark mode to the thinnest watch in its collection.

At 2.0mm thin, you’re probably aware that the Piaget Altiplano Ultimate Concept is not the thinnest mechanical watch around anymore. That award will now go to the recently introduced Bvlgari Octo Finissimo Ultra at 1.8mm thin. That’s actually a 10% reduction, but still less than a human hair’s difference in thickness, or thinness in this case. And when we’re talking about watches this thin, it’s indisputable that these are very impressive works of art. Let’s take a look at Piaget’s new Tribute to the Altiplano Ultimate Concept.

Yes indeed, a tribute to the watch that was originally introduced in 2017 and became available for purchase in 2020. That same year, it was also awarded the prestigious Aiguille d’Or prize from the Grand Prix d’Horlogerie de Genève. The first version had a (small) blue dial, whereas the rest of the watch was completely silver. Then, last year, Piaget presented another silver-colored one with a bridge, screws, hands, and a dial in a deep, forest green. It honored La Côte-aux-Fées, the place where it all started for Georges Edouard Piaget in 1874. That’s why it’s nice to see that this year, Piaget has tried something quite different.

Namely, a dark blue PVD-based sandblasted version of the AUC. This Tribute to the Altiplano Ultimate Concept uses the exact same construction as the previous two versions. But as the name suggests, it also pays tribute to the “birth” of that first Altiplano Ultimate Concept back in 2017. It does so by adding various details all over the main plate, which, in essence, is also the dial. 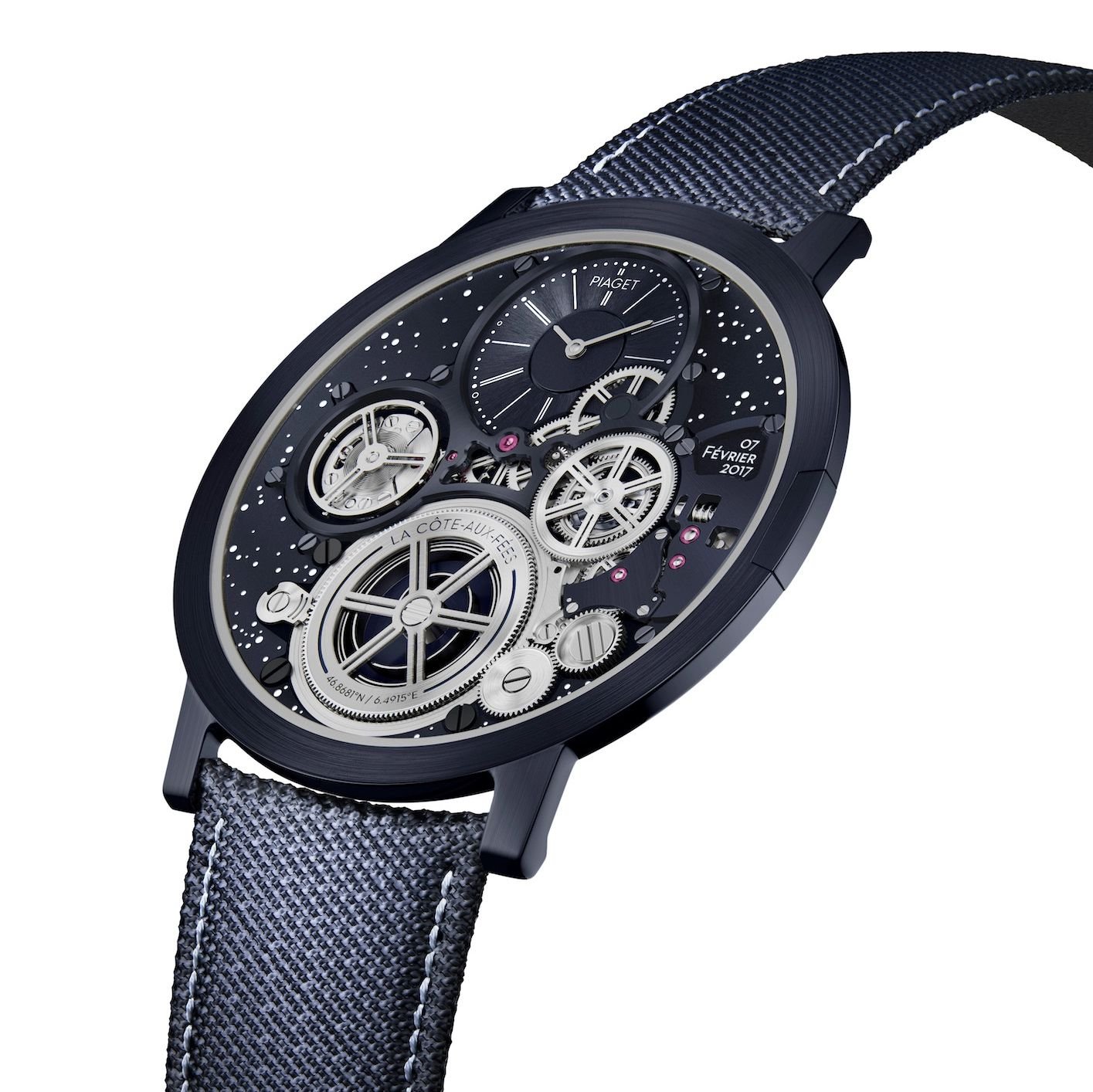 Happy birthday to you!

First of all, the Piaget logo at the top is printed in the same font used at the Piaget offices in La Côte-aux-Fées. The name of the village and its GPS coordinates are also inscribed on the AUC’s ratchet wheel. The offices there are where the first Altiplano Ultimate Concept ticked its first second away on February 7th, 2017 at 7:47 in the morning. Piaget has tried to pay tribute to that moment by introducing small references all over the dial.

The obvious one is the date, which is clearly printed on the right-hand side of the dial. Then we get into the more subtle references. Look at the small dial at 12 o’clock, for example. See anything special there other than those wheels cutting in and the jewel at 6 o’clock? No? Well, look closer, and pay special attention to the minute markers. Two of them are open circles instead of dots like the rest. Those circles mark the time, 7:47, when the AUC took its very first “breath”. But the final reference to the AUC’s birthday is the most subtle and beautiful one to me. 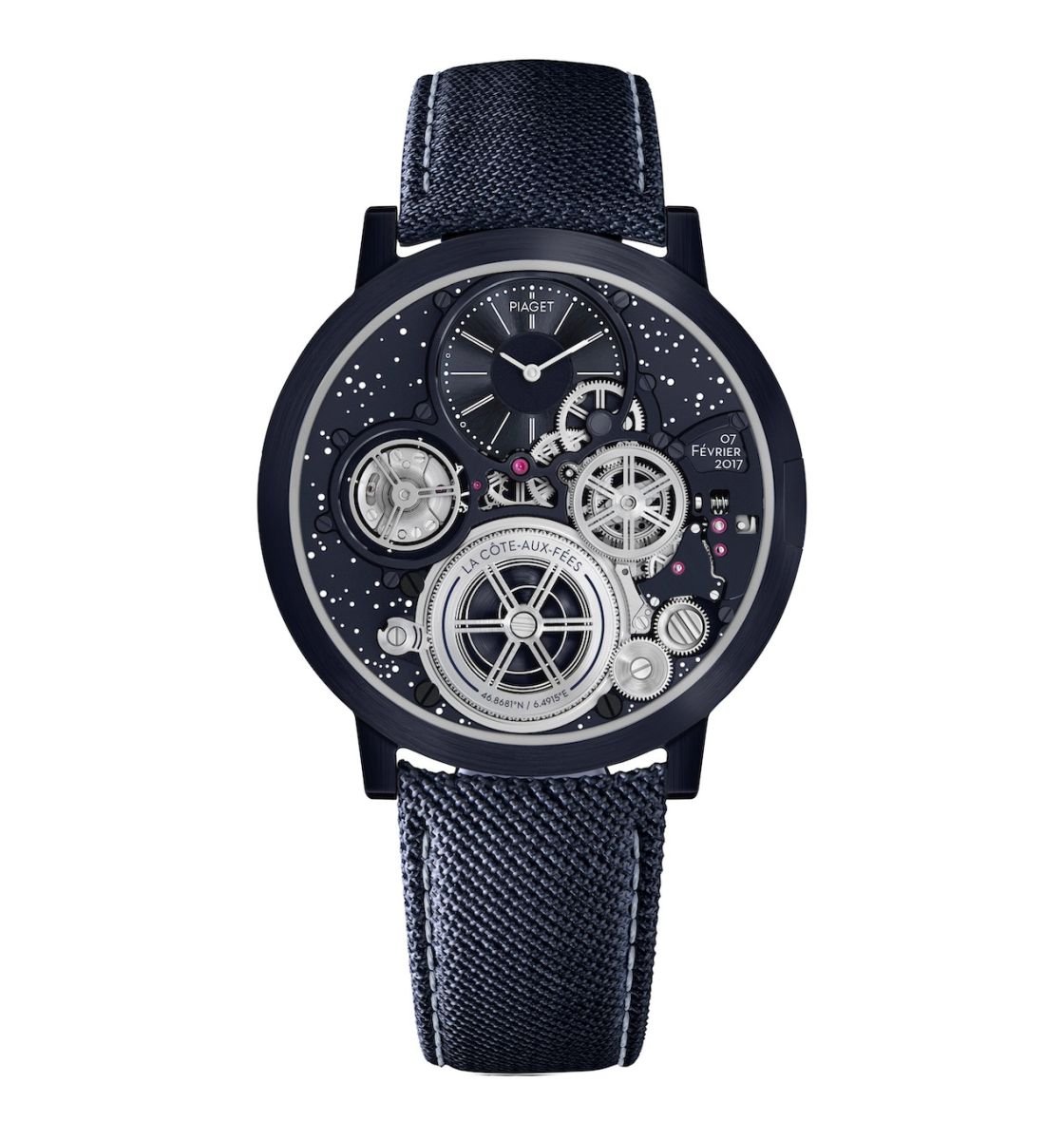 It’s all written in the stars

That final reference is found in the “stars” printed on the open spaces of the dial/main plate. Piaget says that they represent exactly the way the stars were positioned at the moment that first AUC came to life. And I believe it! Oh, and did I mention they contain a good amount of lume? That’s exactly why I think of this AUC as a night-mode version of the Altiplano Ultimate Concept! 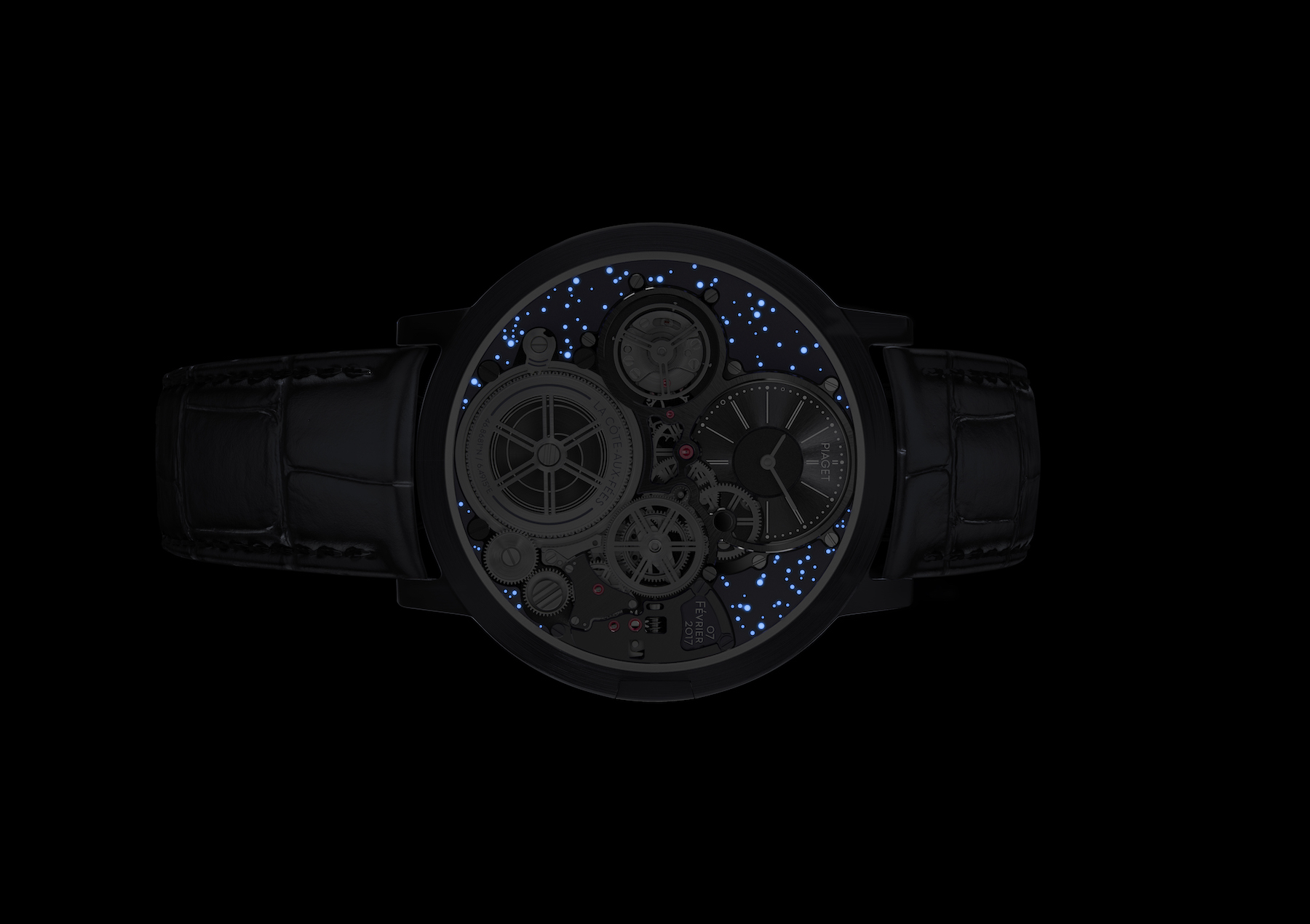 All in all, it’s impressive how many symbolic references Piaget was actually able to work into a watch only 2mm thin. On paper and in the press pictures, this last version is the one that speaks most to me. I think the combination of the dark blue base and the cobalt parts of the movement looks very attractive. The dark 41mm case would probably also look better-sized on my wrist than the other two bright silver versions. But I probably won’t be able to ever see one in real life, let alone buy one. This Tribute to the Altiplano Ultimate Concept is a unique piece. It will probably end up with a major watch collector or in a museum.

What do you think of this Piaget Altiplano Ultimate Concept? We now know Bvlgari made an even thinner watch. But which one is the winner when it comes to the design? Let me know in the comments.