It will come as no surprise to anyone who might have stumbled across my previous writings on the Czapek brand to know I am a fan. After almost a decade of following the brand since its rebirth in 2012, I feel part of the Czapek family. And while I have gushed over last year’s Antarctique model (entirely unapologetically), and fawned over the Quai de Bergues range responsible for this hallowed marque’s renaissance, there was one line of watches in the catalog that never sent me gaga. With the release of the Czapek Faubourg de Cracovie Océan d’Or, the brand’s well-established chronograph line finally has me on board.

Oh, it is so, so satisfying when a brand you love gives you what you want. The Faubourg de Cracovie collection has been, since its 2018 release, the only Czapek family from which I desired more. As soon as news of this release hit my inbox, I started beaming from ear-to-ear. It is amazing, really, how what amounts to a simple colorway shift can have such an impact. But in this gold guise (both yellow and rose models available), the Czapek Faubourg de Cracovie chronograph finally cracks my wishlist. 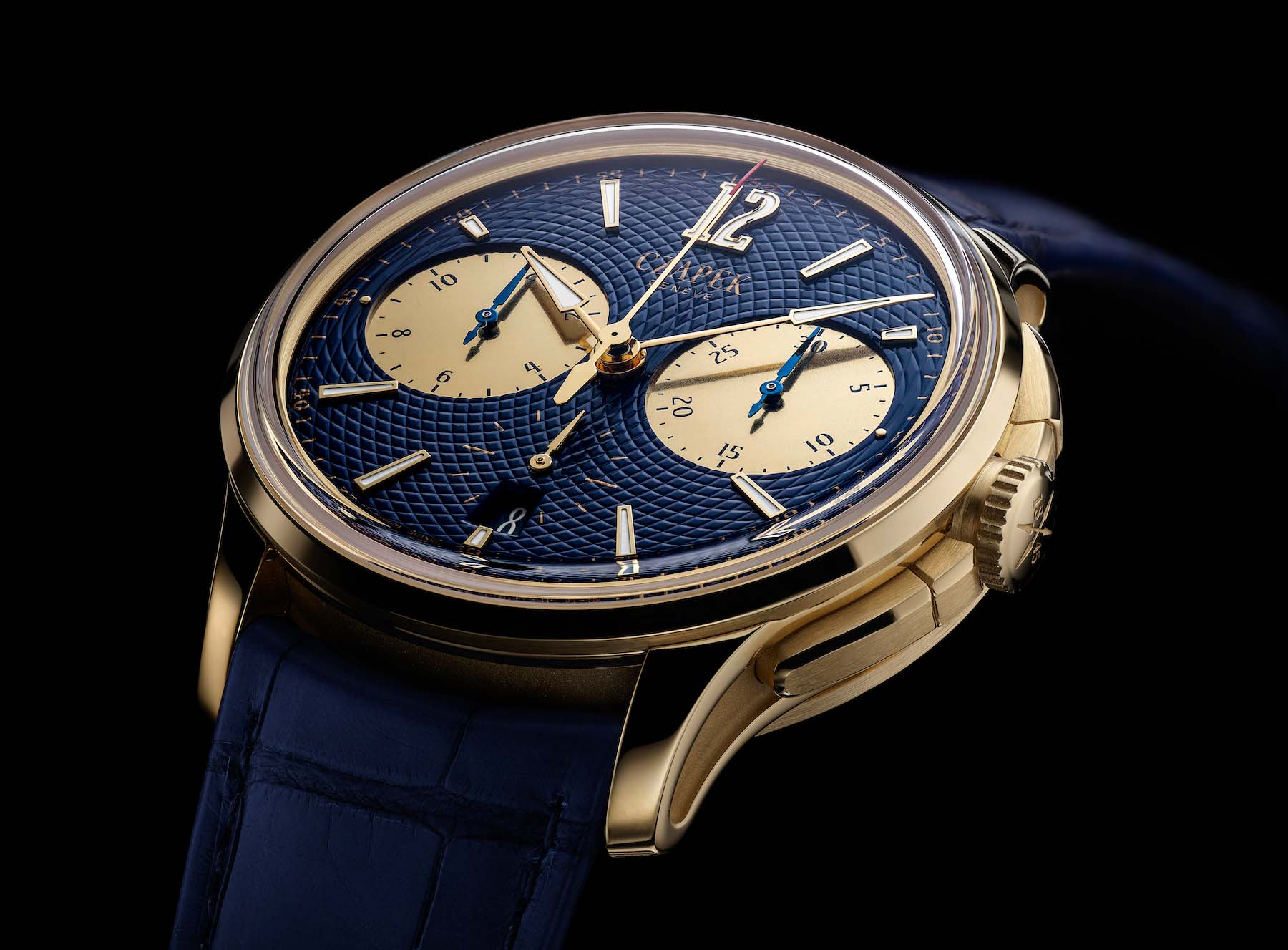 The whole conversation surrounding limited editions within watchmaking is ongoing. For some brands, it feels like a shallow attempt to generate interest that otherwise might be lacking. With others, however, it feels incredibly natural. I rate Czapek in the latter category. Its watches finely-wrought horological masterpieces with price tags that make them unattainable for the majority of collectors.

…a strict limitation seems respectful of the effort put into their creation.

As such, their status as limited models makes sense to me. There is no need to make every model in a collection like Czapek’s eternally available. These watches will never be impulse buys or viewed as simple commodities. They are works of art and a strict limitation seems respectful of the effort put into their creation. 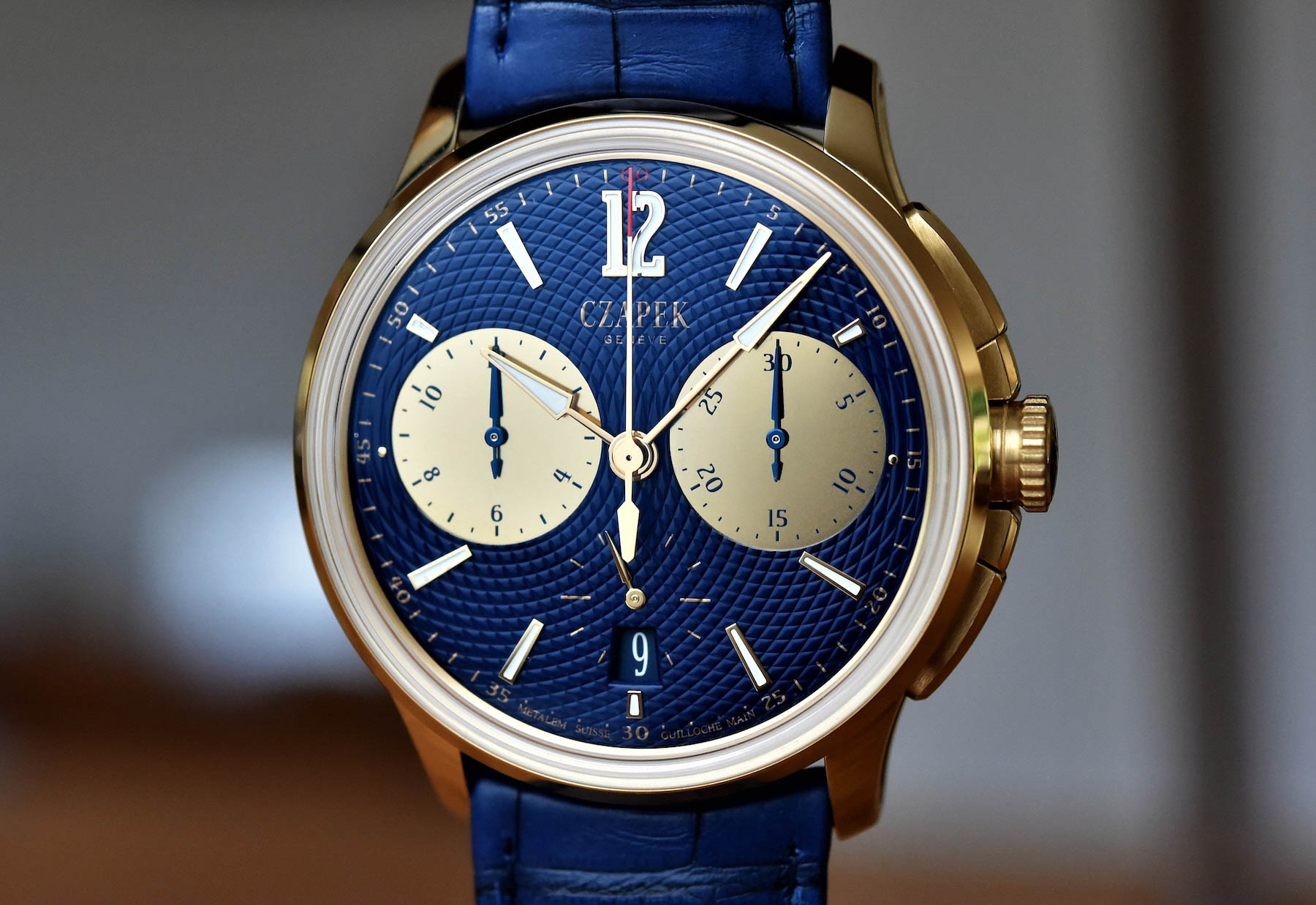 The key, therefore, is getting the limitation bang on. If a brand creates too few, the watch is at risk of becoming marooned. Such watches are devoid of context. They are, rather, personal treasures. To me, watches of such a nature, lose value without at least a micro-community of owners to share in their merits. In my opinion, Czapek has avoided that concern with this release. In total, there will be 10 pieces of this model variant made. There will be eight in 18-karat 5N rose gold, and two in 18-karat 2N yellow gold. 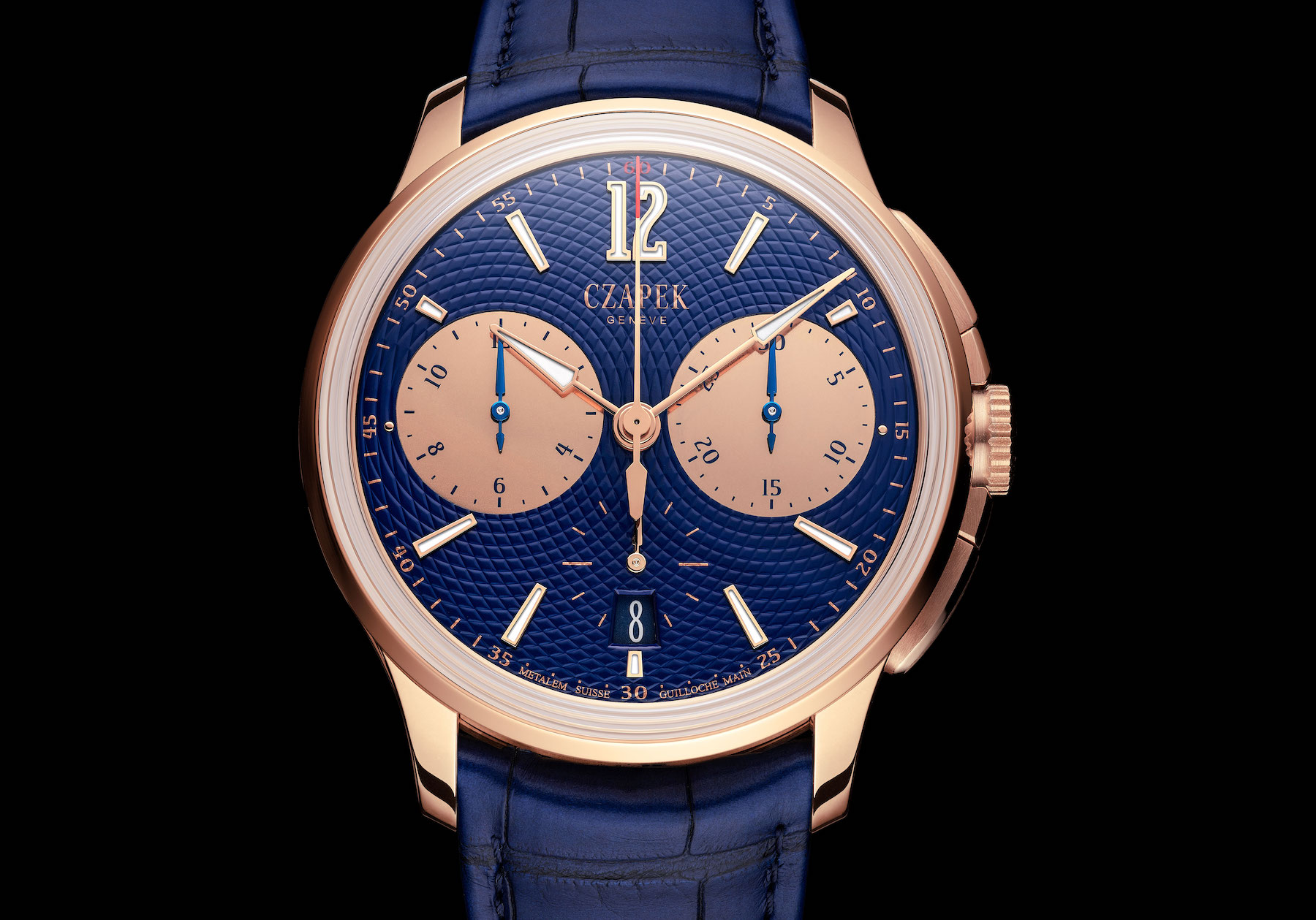 The steel collection provides an anchor

While 10 pieces in total may seem like it fits into the “risky” category outlined above, the steel Faubourg de Cracovie collection provides an essential anchor. Aside from the rich case materials, these chronographs have an unchanged design from the most recent additions to the line. The guilloché “Résonance” dial we’ve seen before (and has, in fact, come to define the family) makes another appearance. We’ve seen it in blue on a couple of occasions. The L’Heure Bleue, Panda Bleue, and Chinook models all used blue as a base. The latter pair also implemented contrasting sub-dials. The Panda Bleue had white sub-registers, while the Chinook — released as part of a salmon-heavy four-way capsule collection — had salmon counters.

Czapek has elevated the model…

And so these pieces serve as a natural continuation of what we’ve seen before but realized now in a manner that sets them apart. With steel and titanium cases in the rearview, Czapek has elevated the model that was, prior to the release of last year’s Antarctique, the sportiest watch in its book. 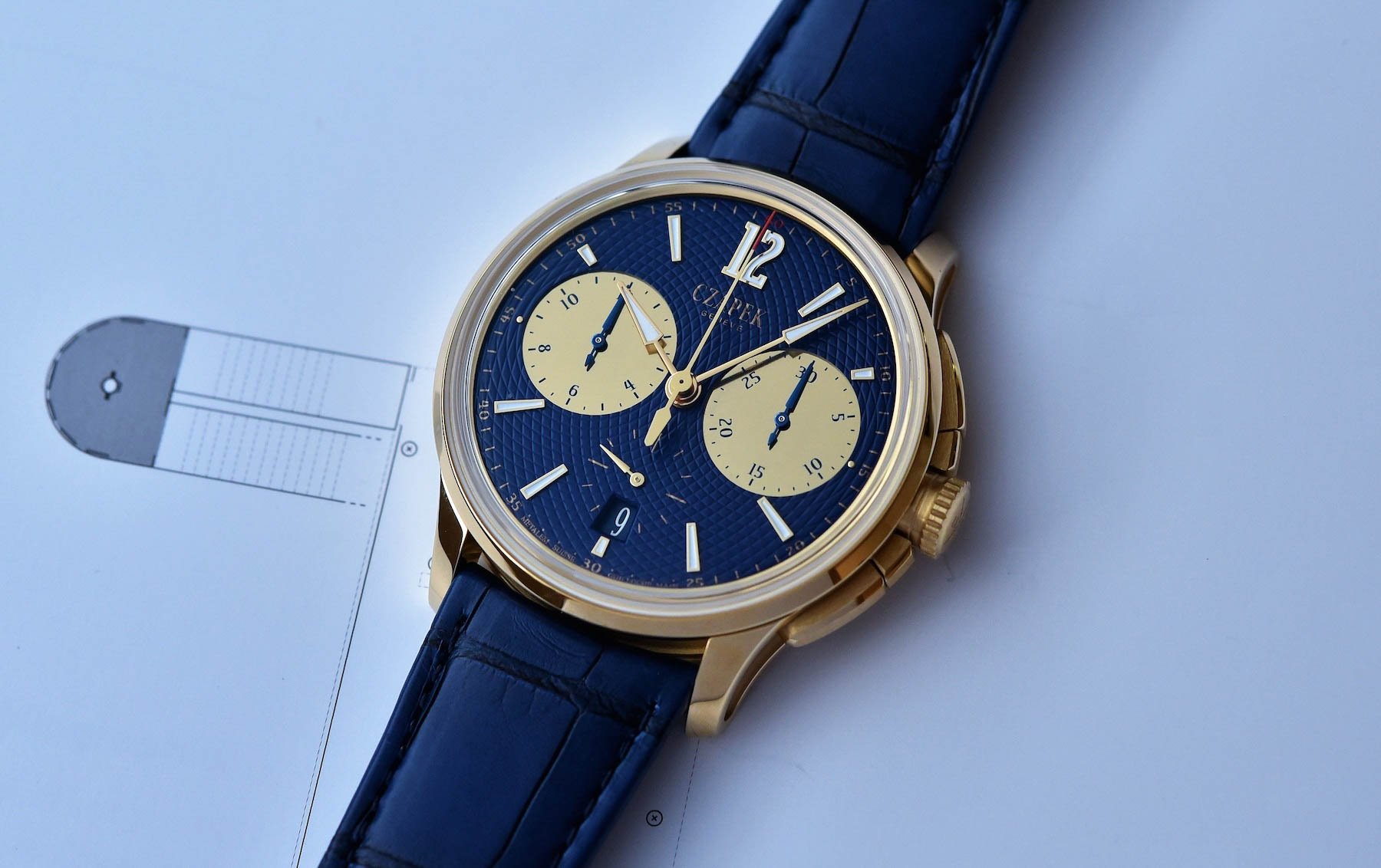 But why are there only two yellow gold pieces?

Interestingly, this concept derives from China. Toward the end of Qing dynasty, luxury Swiss timepieces were in high demand. Members of the Imperial Court and wealthy clientele were desirous of something truly special. As such, a tradition emerged that saw two timepieces being made as reflections of one another. These “mirror pieces” were made for very special events of customers. It’s certainly an unusually global source of inspiration, but I can imagine it having particular resonance (pun intended) with Czapek’s Chinese customer base.

“This approach reflects very much the essence of traditional Chinese esthetics based on a well-known philosophical conception: the principle of Yin and Yang, stating that in all things exists two opposite sides yet inseparable,” says Xavier de Roquemaurel, CEO of Czapek & Cie.

“Moreover, in Chinese culture there is a true love for symmetry, reflecting the notion of an established order. Surprisingly, Czapek himself seemed to share this love, whether in the architecture of his movements or in his engine-turning patterns. Our Résonance guilloché, where the two sub-dials seem to respond to each other infinitely, is also based on this idea of symmetry.” 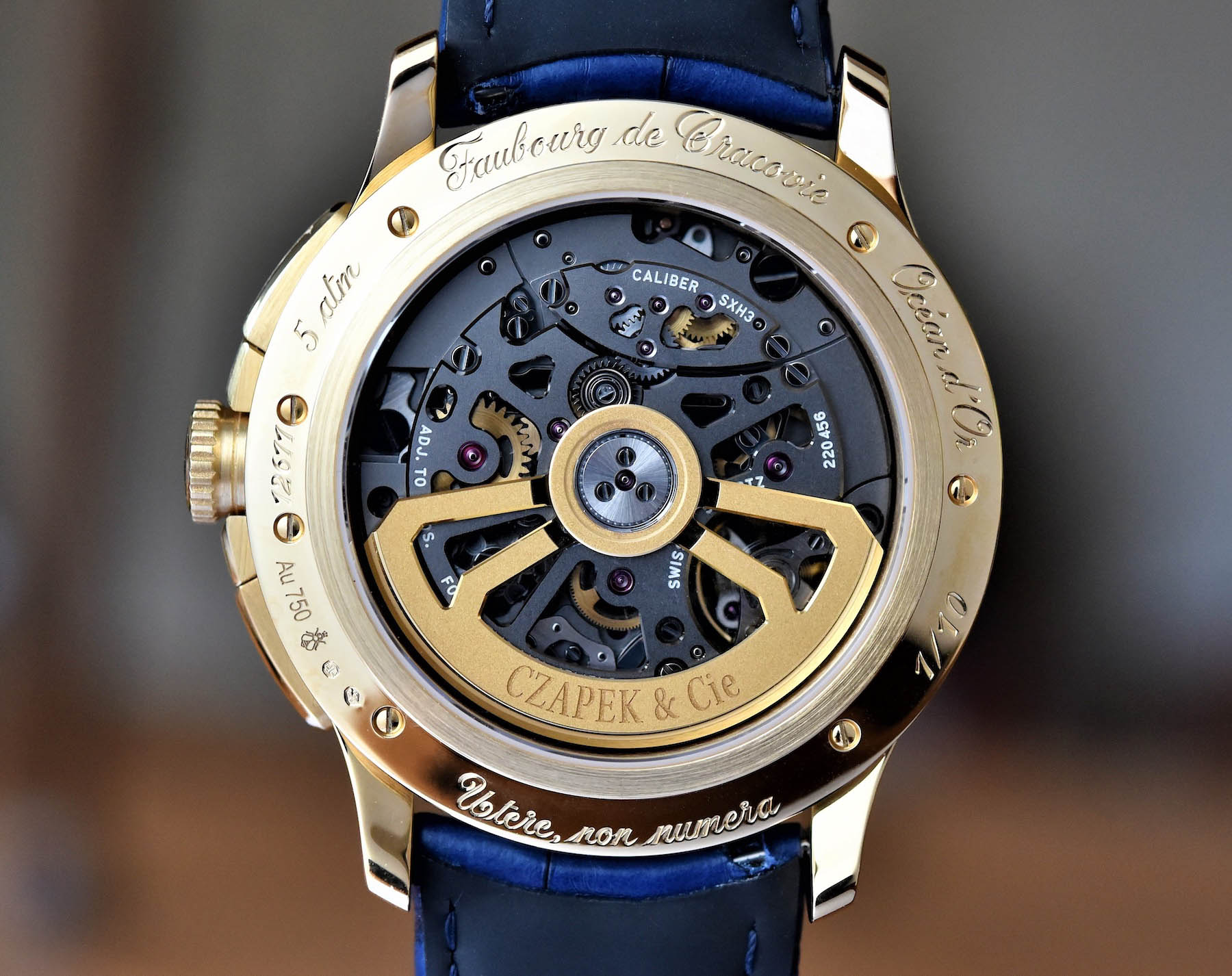 Both editions of the Faubourg de Cracovie Océan d’Or are powered by Czapek’s proprietary SXH3 Caliber. This high frequency (36,000vph/5Hz) column-wheel chronograph movement (with a vertical clutch) features its very own flourish of gold. As always seems to be the case with Czapek’s automatic movements, the rotor is in gold. Here we see it in either rose or yellow depending on the case type. While rose gold is a common material for the SXH3 rotors, the yellow gold option, coordinating with the case, is a real treat to see.

…they have never shied away from being edgy or modern…

Beneath this golden rotor weight, we can see anthracite bridges. We saw this in the SXH5 movement of the Antarctiue Terre Adélie and the Passage de Drake models. It seems, pleasingly, to be becoming a signature of the brand. That is, in fact, one of the things I like most about Czapek’s most recent designs. The movements have always been “inspired” by François Czapek’s original works. However, they have never shied away from being edgy or modern in their architecture and presentation.

Pulling off the balancing act between a largely classic dial design and an interesting and challenging movement set-up is not easy. I think Czapek has achieved this by integrating modern hints in the dial-side view of its products that link-up nicely with the back-side appearance. 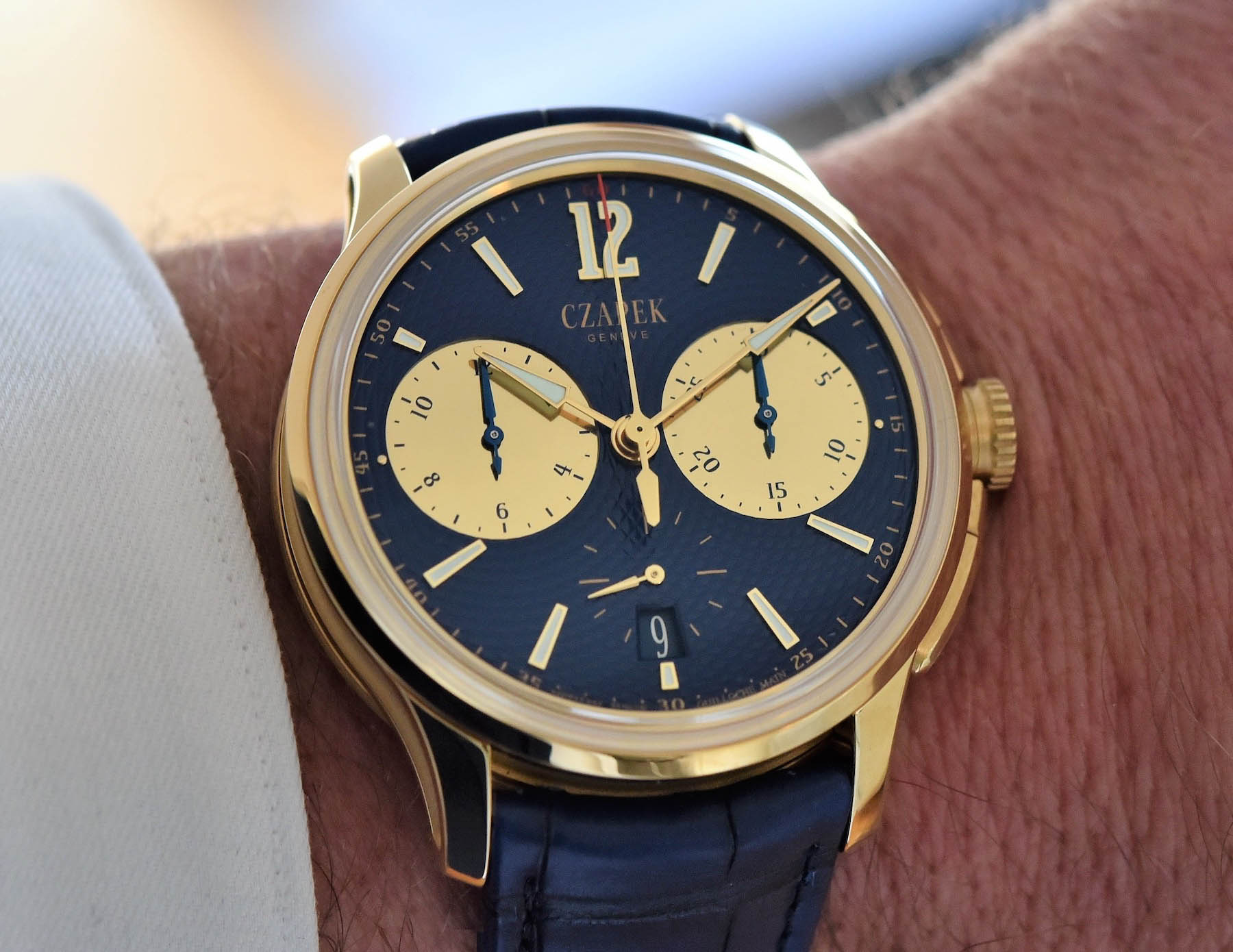 Dimensionally, the Faubourg de Cracovie Océan D’Or is a very modern watch. With a 41.5mm diameter, the watch hits a wearable sweet sport for a sporty-yet-versatile chronograph. While anointing anything with more than two hands a “dress watch” can incite pure, unfiltered rage in some collectors, I think it is clear that this is a special piece that would be more at home in more formal settings than its steel or titanium brethren. It is, for that reason, truly a luxury sports watch, and one that should be taken as such. 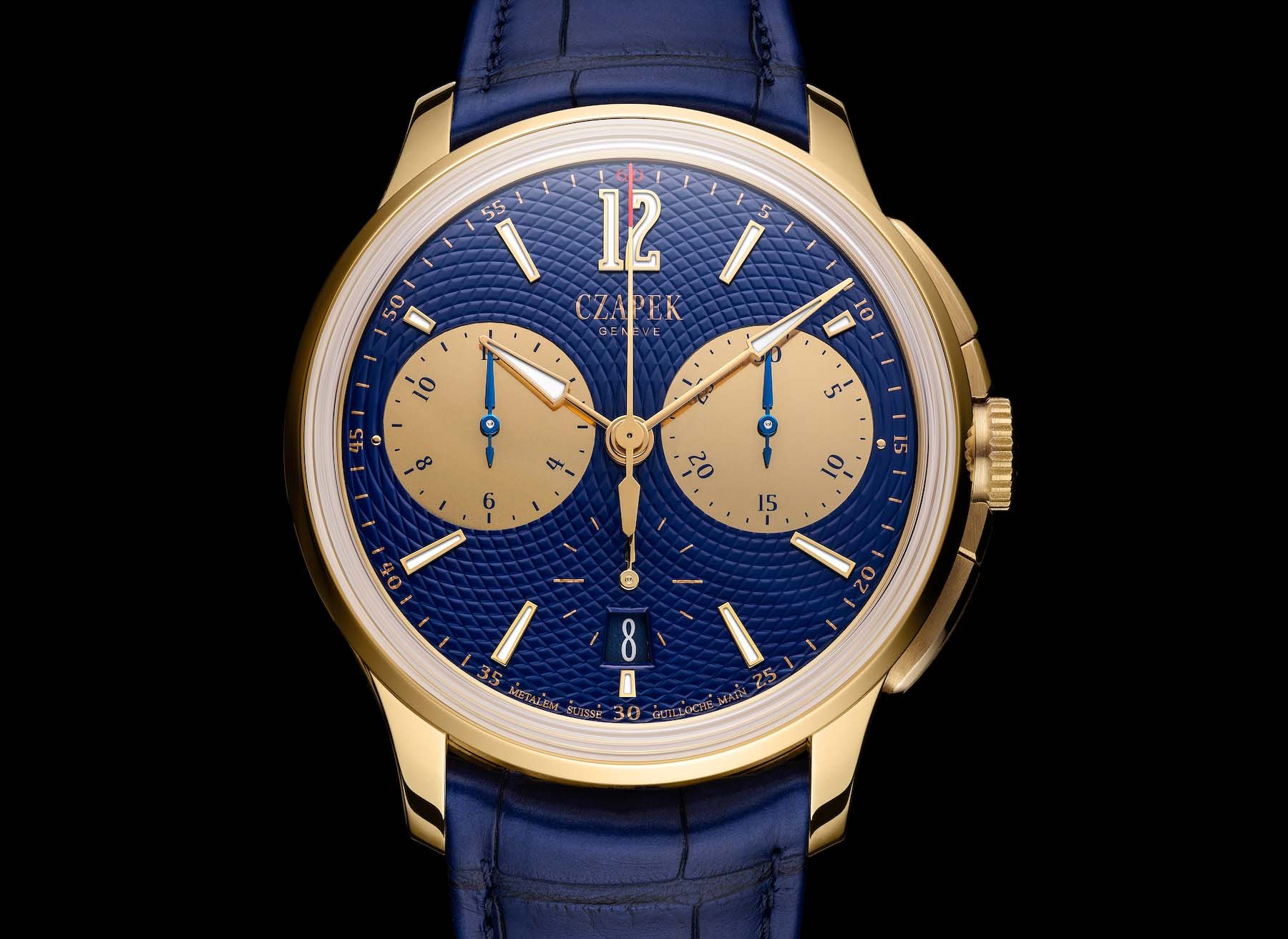 What about that dial pattern, though?

Guilloché is a word frequently thrown around in the watch industry. While it would be oh-so-neat if it meant just one thing, it does not. It is true to say that not all guilloché dials are created equal. Besides the fact there are many different aesthetic styles, so too are there many nuances to the production processes that go into creating this dizzyingly dashing displays. 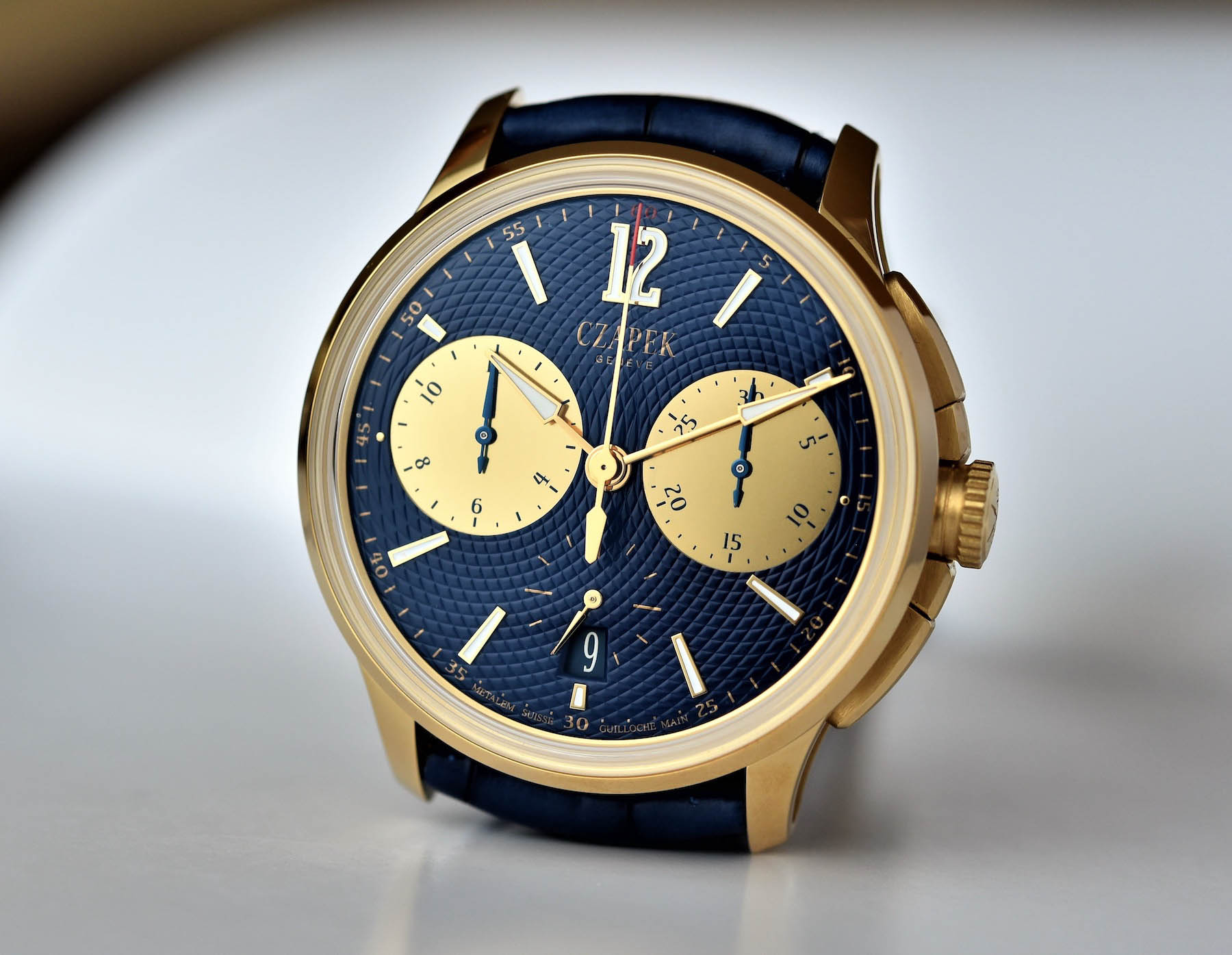 This one in particular, which sees intersecting circular lines form a pattern of bas-relief squares, was inspired by François Czapek himself. To bring it to life in 2021, Czapek developed this finish with its Swiss partner for engine-turned dials Metalem. The dial gets its color from an ALD coating developed by another one of Czapek’s manufacturing partners, Positive Coating. This company works out of La-Chaux-de-Fonds, where it devises new and interesting color treatments to bring to life Czapek’s visions. 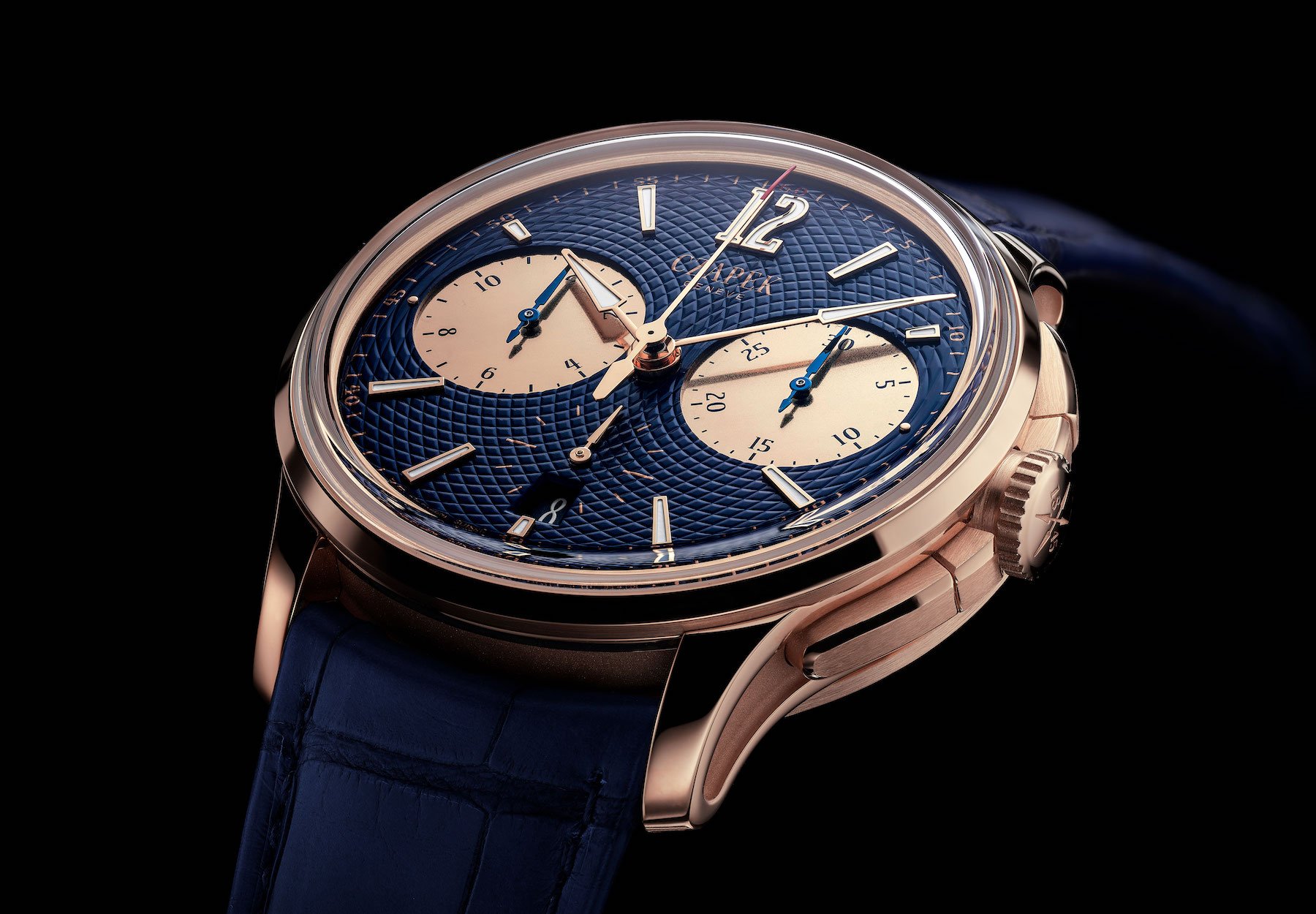 We talk a lot about transparency in watchmaking. Each brand has its own idea of what the term actually means. Since its (re)foundation in 2012, Czapek has always been open about the team of in- and out-of-house partners and friends that play their part in bringing these pieces to market.

Furthermore, the origins of this model, in particular, can actually be found in the mind of a friend of the brand. A long-time Czapek collector pitched the idea to Xavier and his team. The result is what you see before you in this article:

“The idea of the Océan d’Or was originated by a bespoke order by one of our customers. We guided him in designing his Faubourg de Cracovie in gold, and he was then glad to see the project go further and become a limited edition available to another — or a few other — like-minded collectors.” 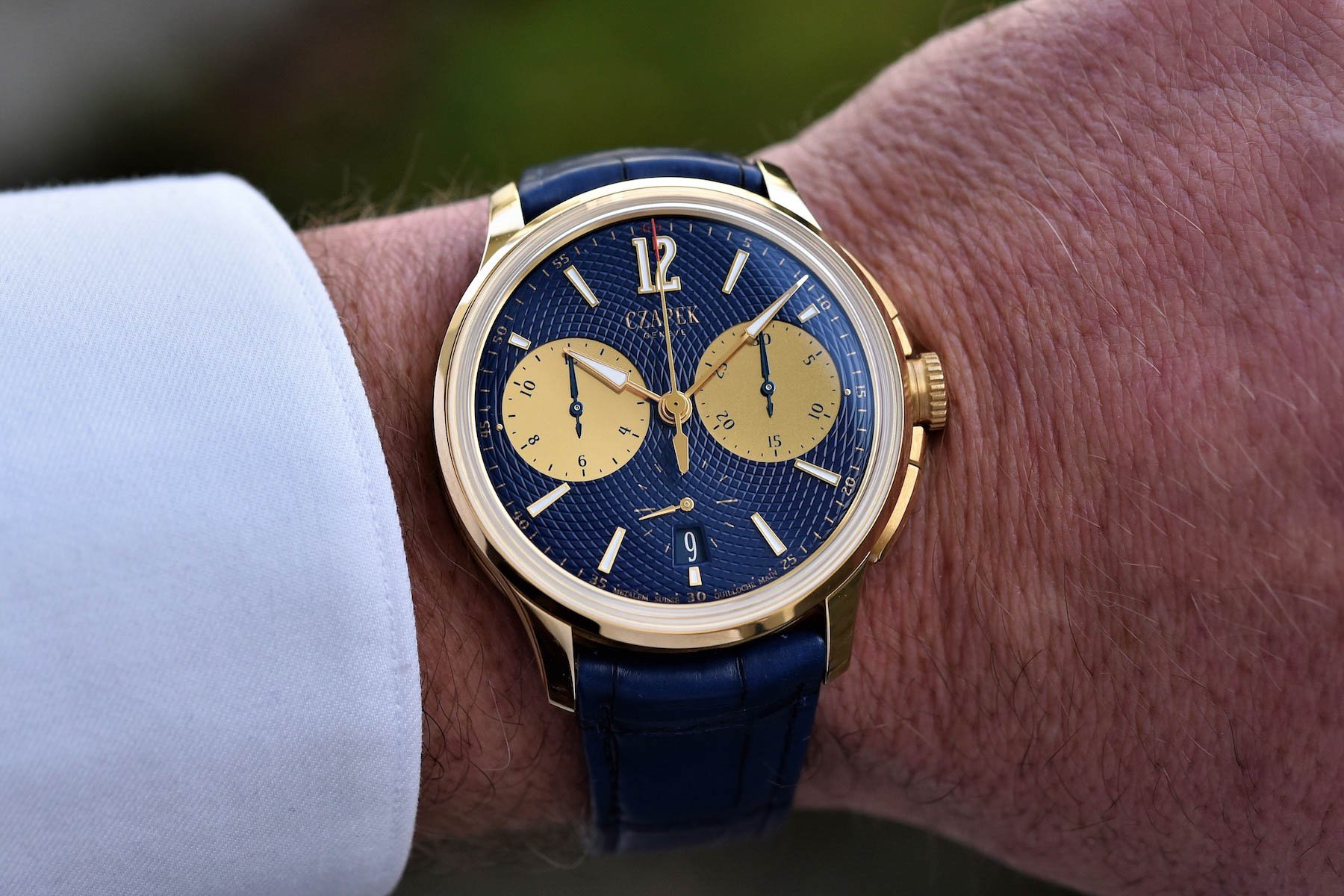 It all too often feels like the industry is an echo-chamber. I find it heartening that a brand as well thought of as Czapek would openly listen and respond to a customer’s suggestion. But that’s just my opinion. I’d be interested to know what the Fratelli makes of this strategy. Please, let me know your thoughts and feelings on it in the comments below. The Océan d’Or limited edition is available at the brand’s official retailers, at the store in Rue de la Corraterie 18, Geneva, Switzerland, and on the brand’s official website.