I’ve never actually been to a watch auction, but I remember that as a kid, I went to an antique auction once with my parents. It was an exciting event somewhere in the center of Amsterdam. The place was packed with people, there wasn’t much light, and the overexcited auctioneer made quite an impression on me. So while I was browsing through this week’s listings and results from the Geneva watch auctions, that’s exactly what I imagined these events to be like as well.

Yet some of my Fratello colleagues who have been to them told me that they experienced quite the opposite. They actually found the auctions to be kind of boring. According to them, the pre-viewings are more exciting because you can look at and hold the watches that are up for auction. But let’s forget about what they said for a moment. I’ll just imagine myself in that dark, steamy place with a fantastic auctioneer and many excited bidders trying to get their hands on that one particular lot number. Which pieces would I have liked to acquire if I had some money to spare? I went through the recent listings, and here are my observations and surprises. 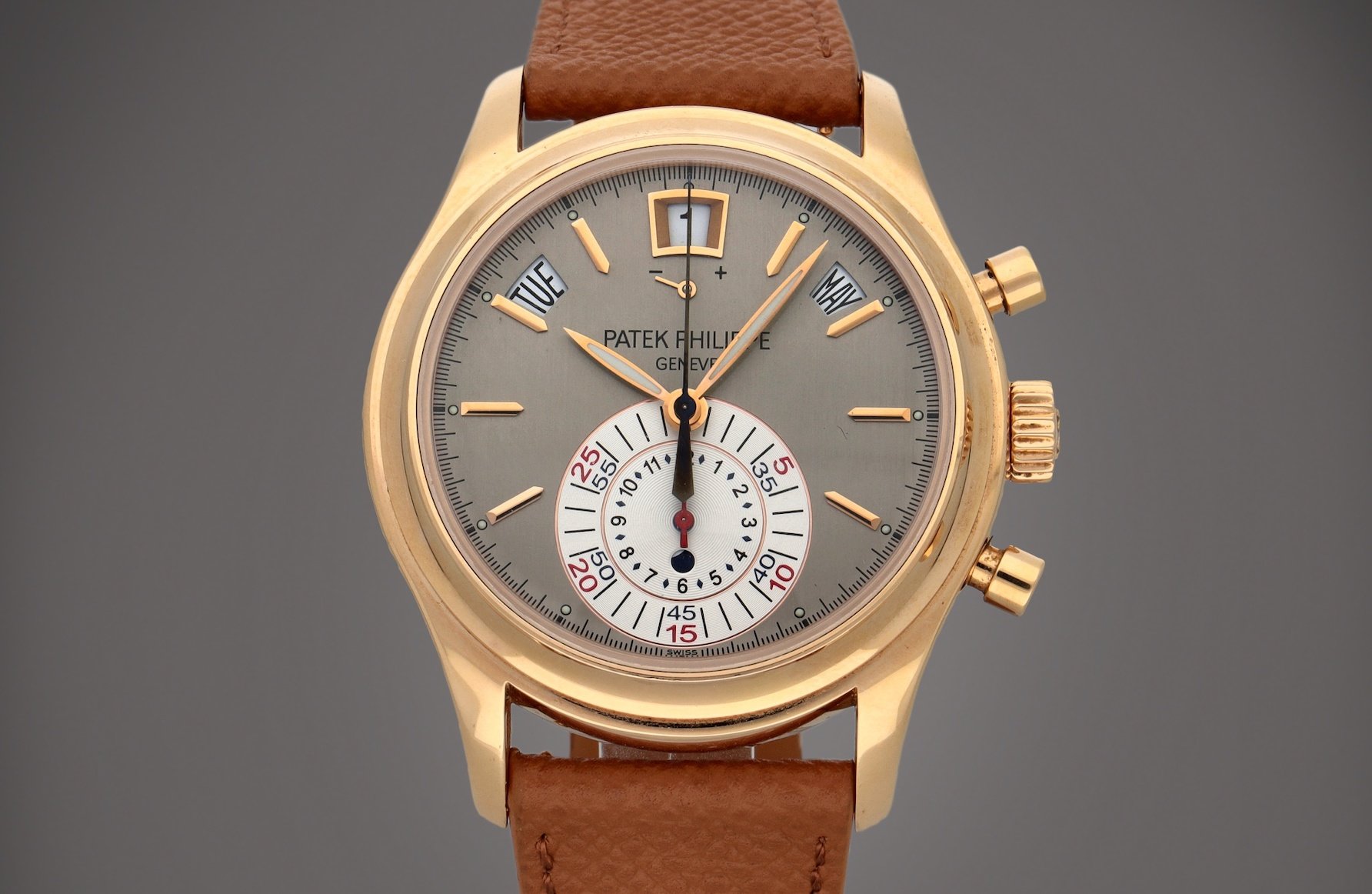 For this exercise, I just opened up the websites of all the usual auction houses — Phillips, Sotheby’s, and Christie’s. I’d never really taken a look at these sites, and I was surprised by how many Rolex, Audemars Piguet, and Patek Philippe watches are put up for auction. But I guess it’s just a reflection of what is happening in the rest of the watch market. At the time of writing this article, the results for the Phillips and Christie’s auctions were already in. I started to compare their expected returns with what they actually got in the end. Here are some of the biggest “skews”.

To start with, basically, any yellow gold Rolex brought in a lot more money than initially expected. I’m not really sure why, but due to the soft material, it might be difficult to find watches that are still in good shape. But as we sometimes discuss in the office, gold Rolex watches are usually cheaper on the secondhand market than steel models. In light of that, it might be a good moment to buy a yellow gold Rolex and put it up for auction through one of these channels to see what happens. But, of course, try this at your own risk because I am by no means a financial advisor! 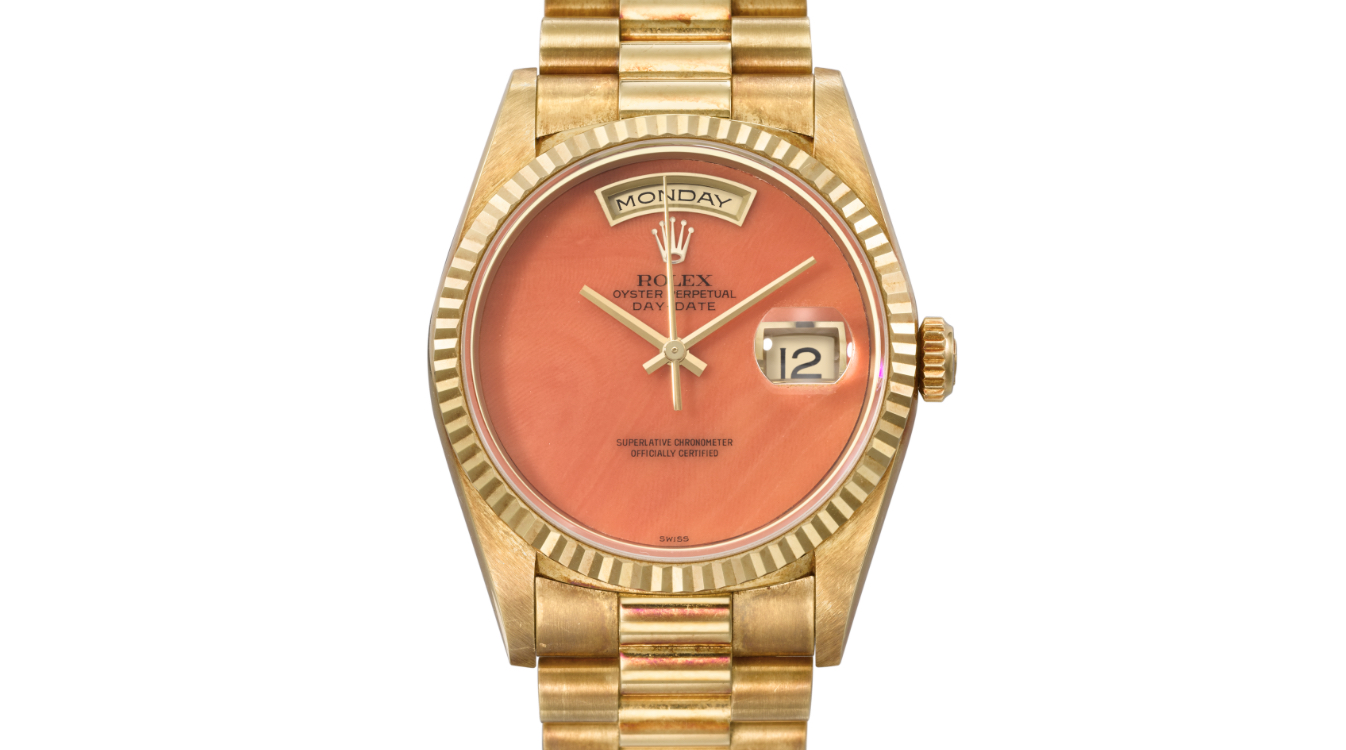 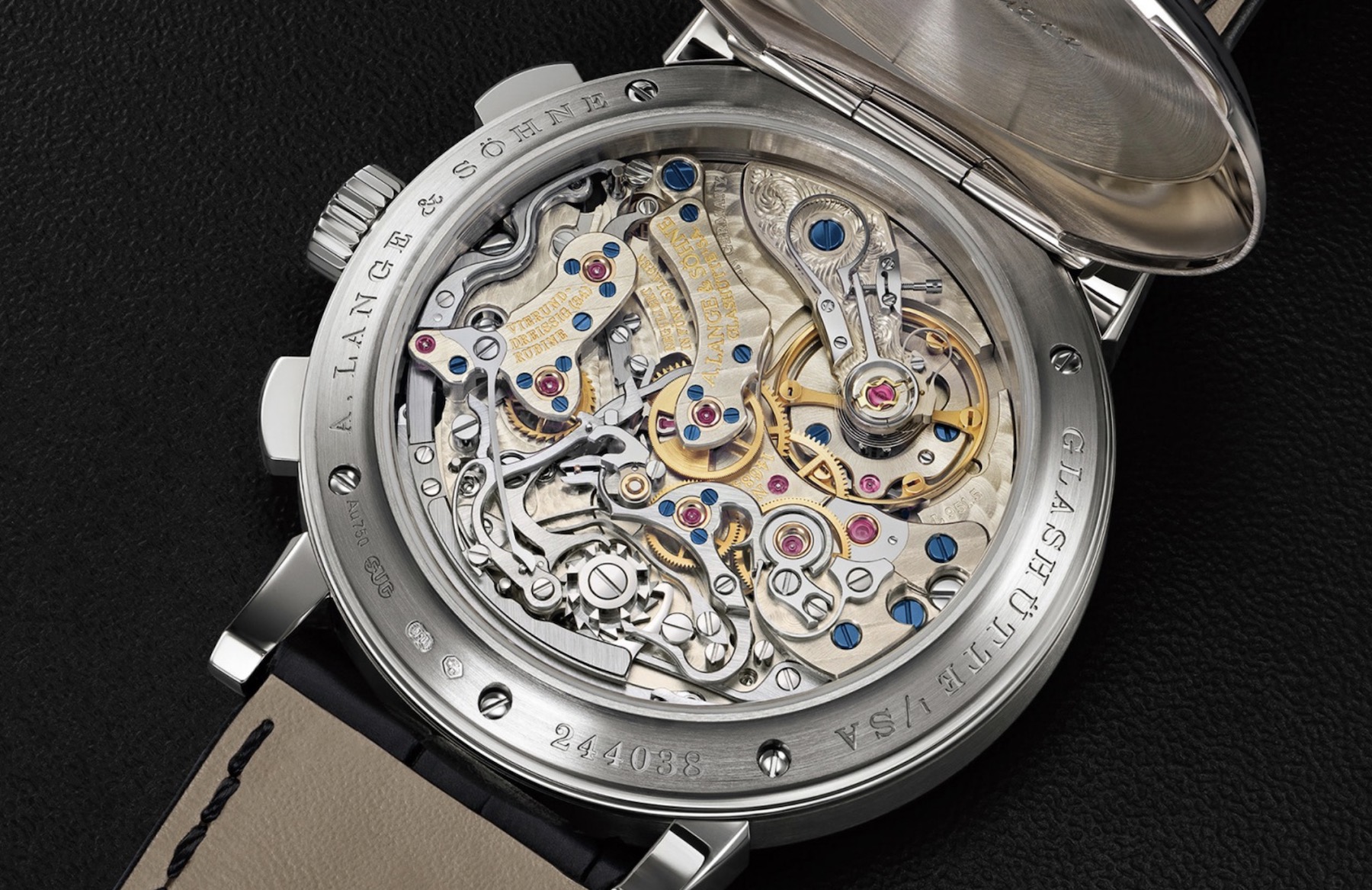 But don’t worry if you still have a white gold A. Lange & Söhne flyback chronograph lying around. This particular one was expected to bring in up to CHF 200,000 but actually sold for a little over CHF 1,000,000. That might have something to do with the fact that all proceeds were going to The Prince’s Trust. “Founded in 1976 by His Majesty King Charles III,” the listing says, “the charity supports young people transform [sic] their lives.” But still, that’s a huge difference in price. 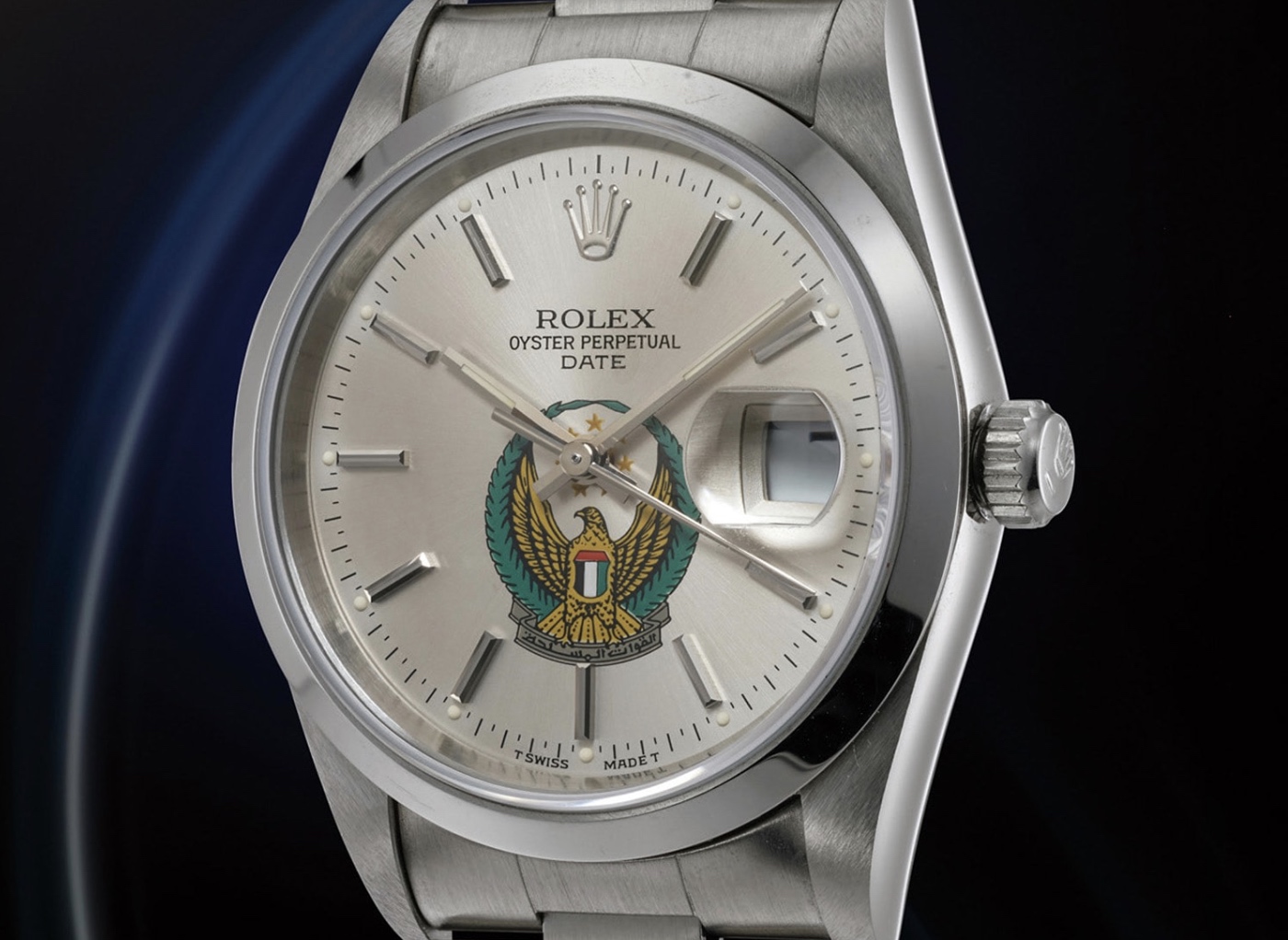 But I can also imagine you had your eyes on a more affordable lot like this Rolex Oyster Perpetual Date ref. 15200 from 1994. Phillips gave it an estimate of CHF 2,000–4,000, but in the end, it sold for a whopping CHF 17,010. I suppose the “new old stock” condition of the watch had some influence on that differential. But I think the state symbol of the United Arab Emirates on the dial might have been the real reason that it sold for over four times its estimated value. And I guess the buyer didn’t read Lex’s article on why you shouldn’t invest in 34mm Rolex models (although, to be fair, he did specify the Air-King…). 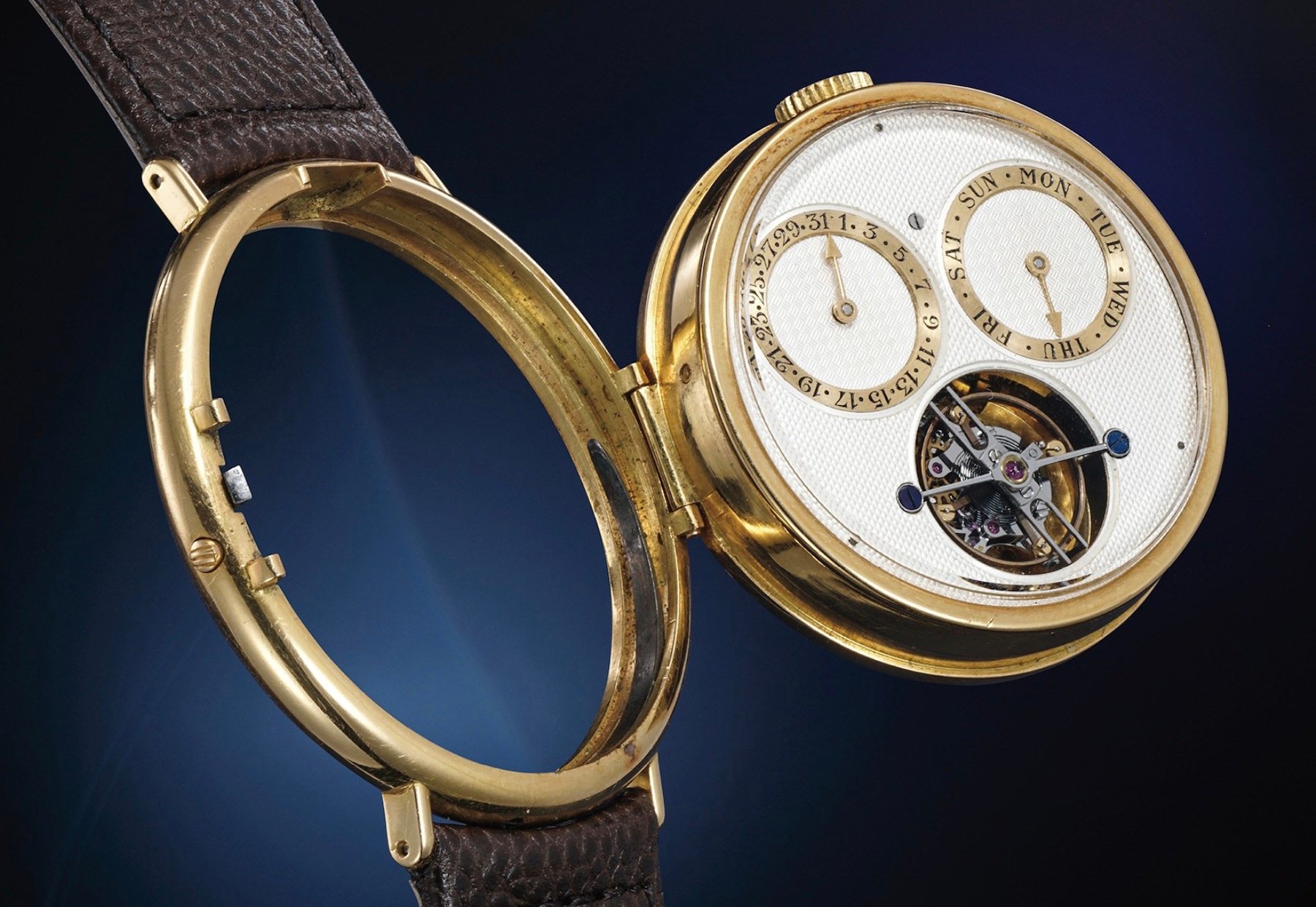 The next piece that really surpassed all expectations was a watch both made and worn by the master watchmaker George Daniels. You could say that his Spring Case Tourbillon was like his version of a jack-in-the-box. Based on the front dial, it looks like a fairly simple yet extremely well-executed time-and-power-reserve watch. But as soon as you push a button on the left side of the case, the module flips and shows its real genius. On the backside, you see the tourbillon and day/date complications that Daniels equipped the watch with. And, of course, his own invention, the co-axial escapement, is also present. Phillips gave this piece an estimate of around CHF 1,000,000, but in the end, it sold for a little over four times that price. 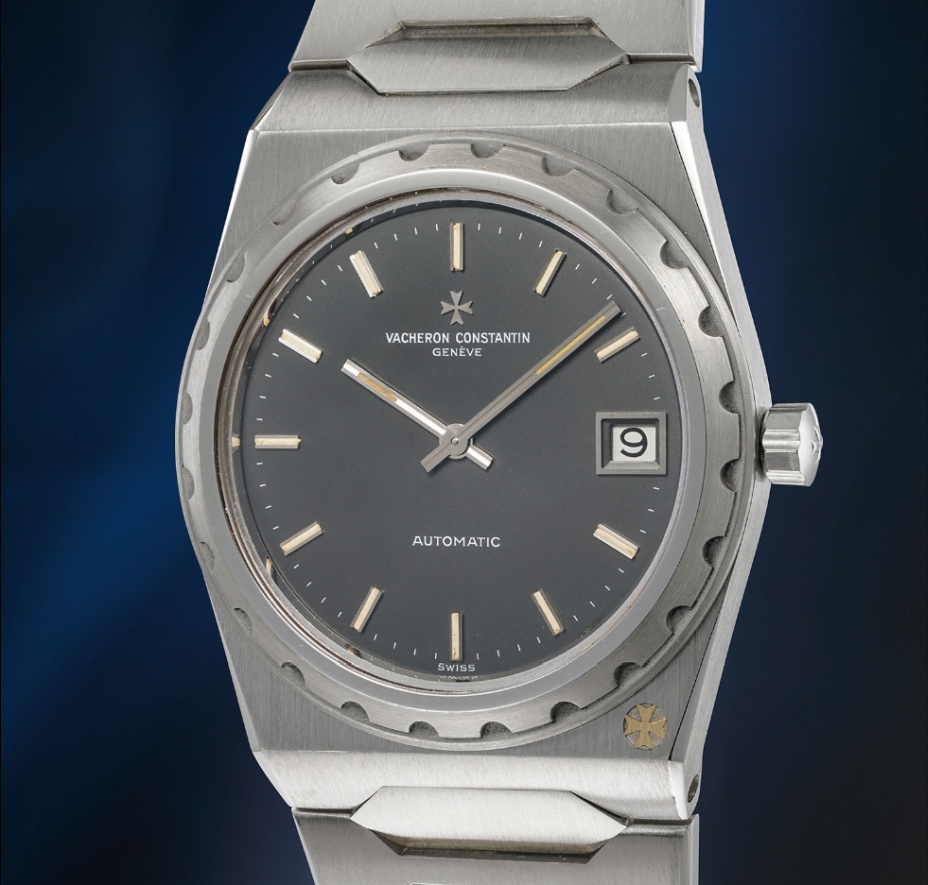 While I was browsing through all the results, I also found some watches that piqued my own interest. Most of the time, this was not because of their prices but simply because of their attractive looks. Coincidently, most of these also sold for above their estimated value. Maybe next time I should look at the lots before the auctions take place and sell my advice to some of the attendees. But maybe I was just lucky… 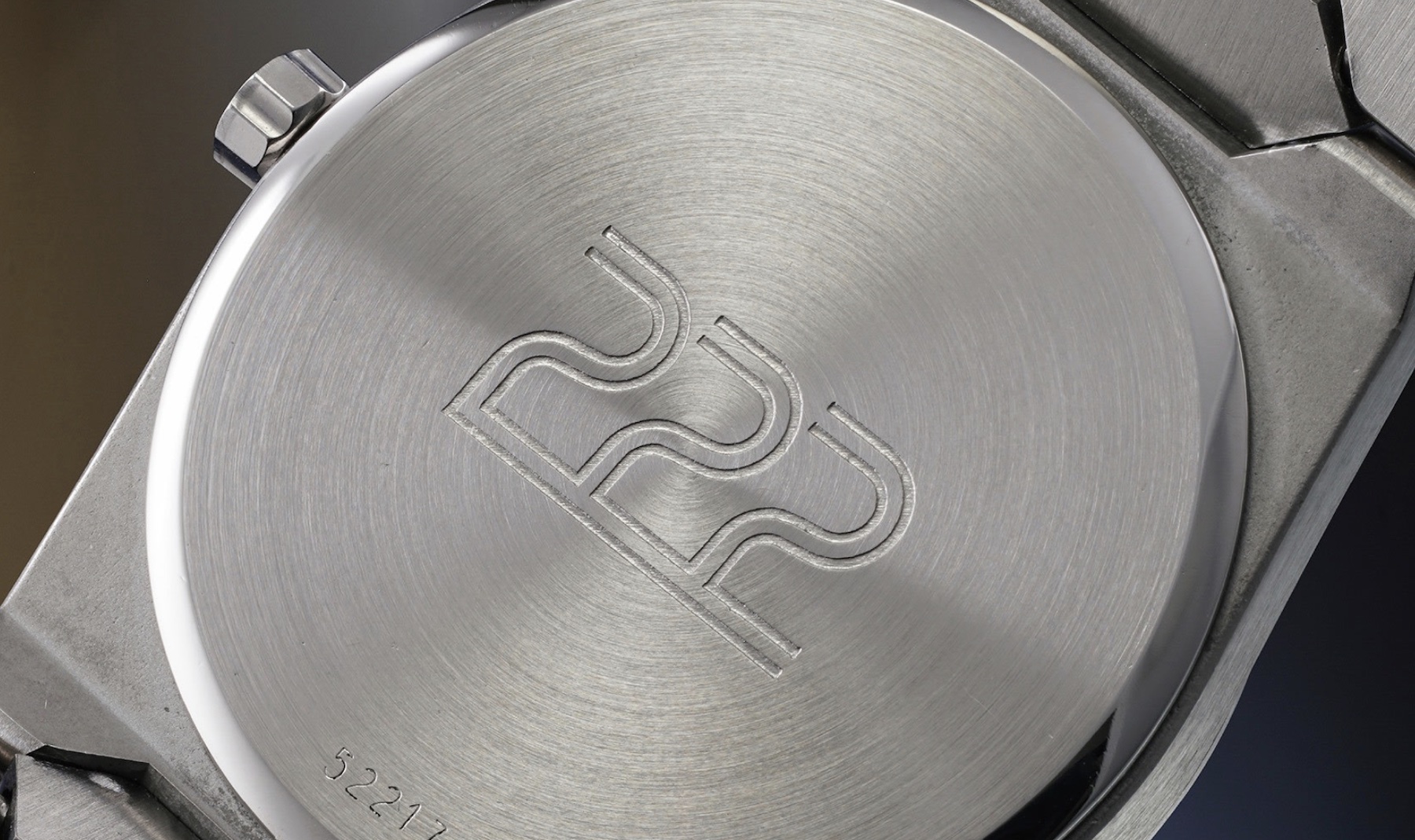 Isn’t that a cool case back?  — Image courtesy of Phillips

I guess this first one is not just my favorite, but almost everyone else’s as well. It’s the classic Vacheron Constantin 222. This particular reference 44018/411 is from 1978 and, as you likely know, was designed by Jorg Hysek. It was estimated to be worth somewhere in the CHF 30,000–60,000 range, but it sold for a little over CHF 80,000. There’s another one on auction at Sotheby’s today, but it may have already sold by the time you read this article. 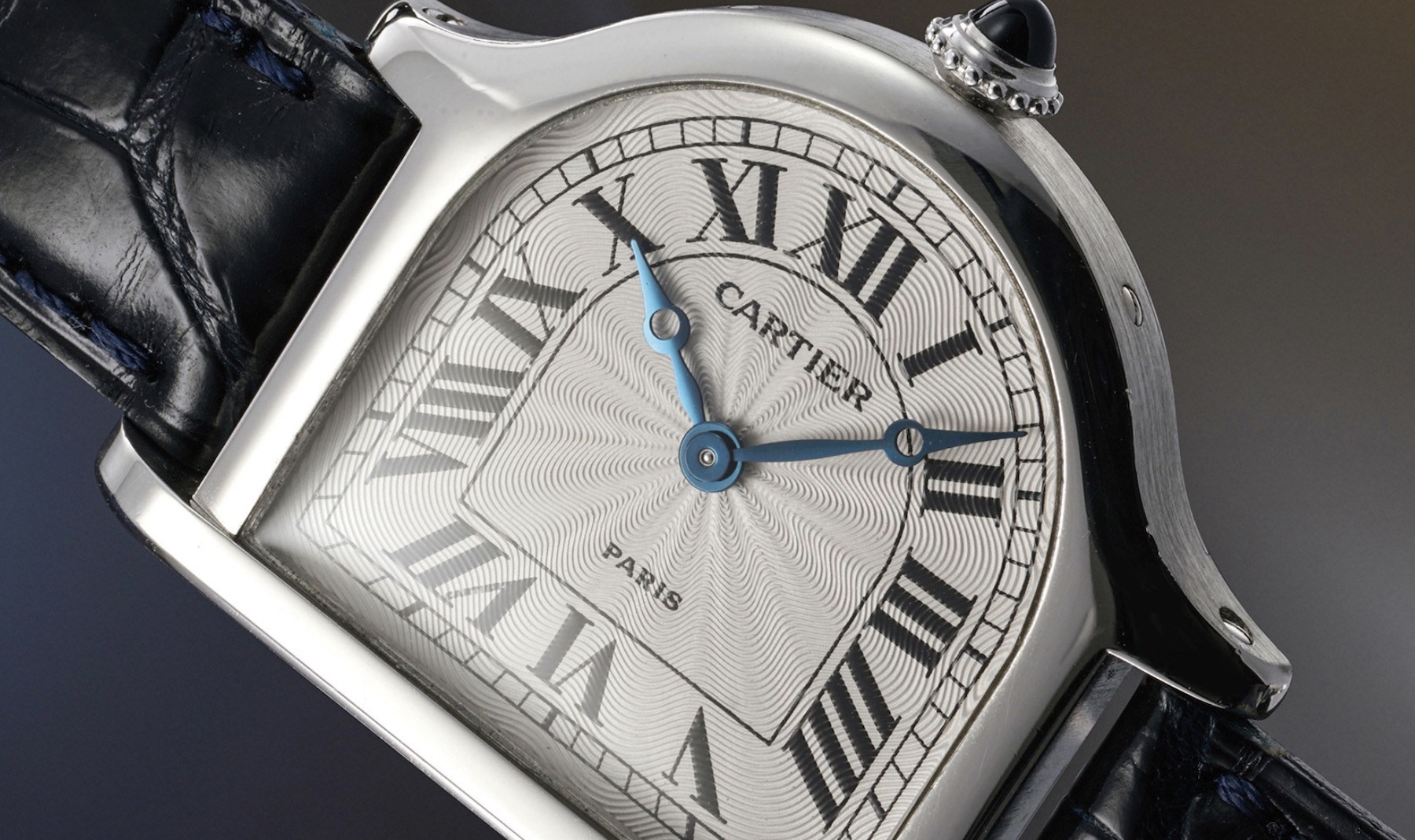 This next one comes from one of my favorite brands, Cartier. It’s a platinum Cloche model from 1996. This particular example was a one-off that was likely produced for Cartier’s 150th anniversary. This one was also estimated to sell for between CHF 30,000 and CHF 60,000, but it pulled in CHF 107,100. 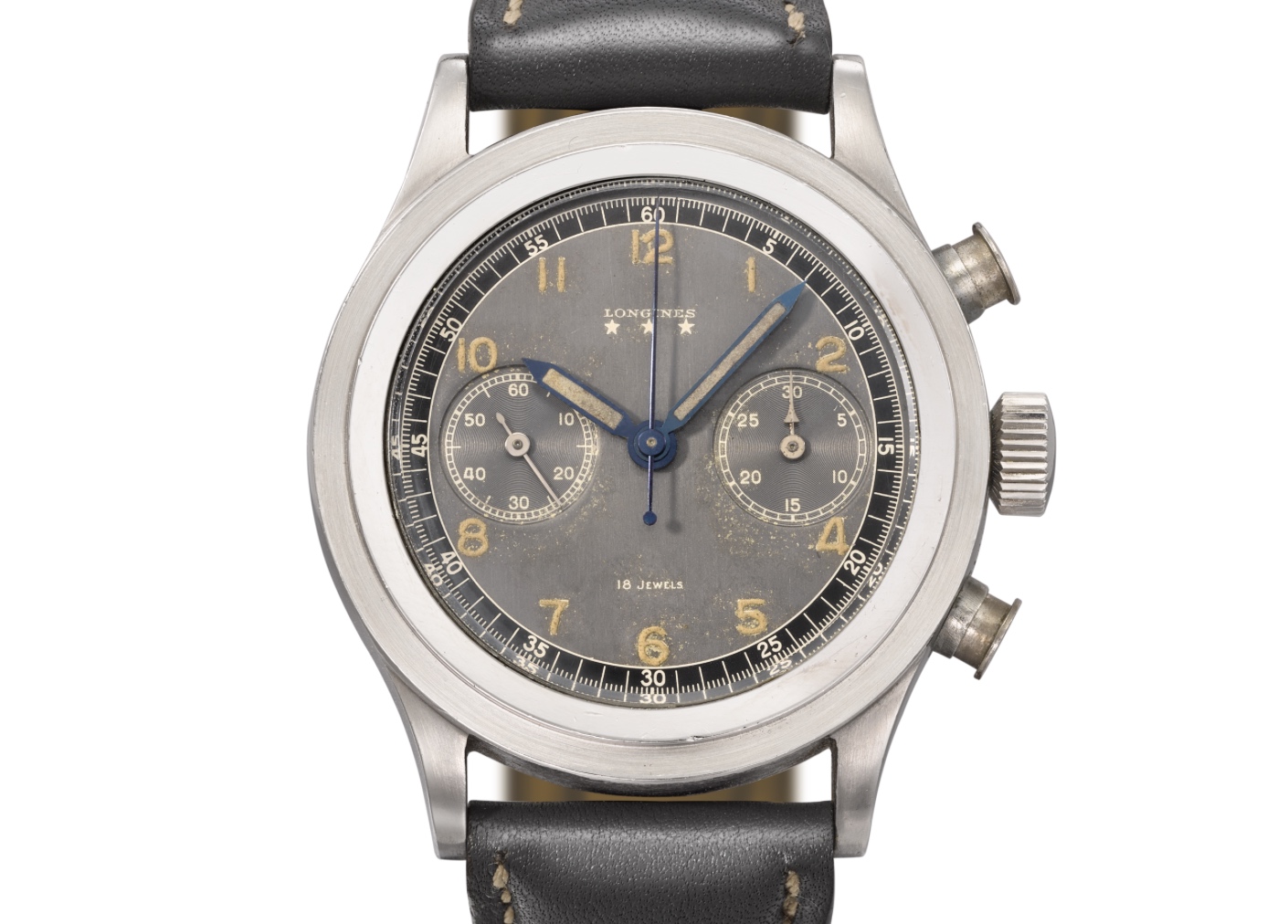 All right, a few more!

Now we get to one that I immediately fell for the moment I saw its little thumbnail on the Christie’s website. Just look at this Longines “Staybrite” flyback chronograph with the famous caliber 13ZN inside! Do you see those thick numerals on the two-tone dial, those blued hands on top, and that immaculate stainless steel case with big, bold pushers on the side? Give me more, please! Sadly, this will stay out of reach for me forever. Although it was estimated to sell somewhere between CHF 20,000 and CHF 40,000, it actually sold for CHF 182,000! 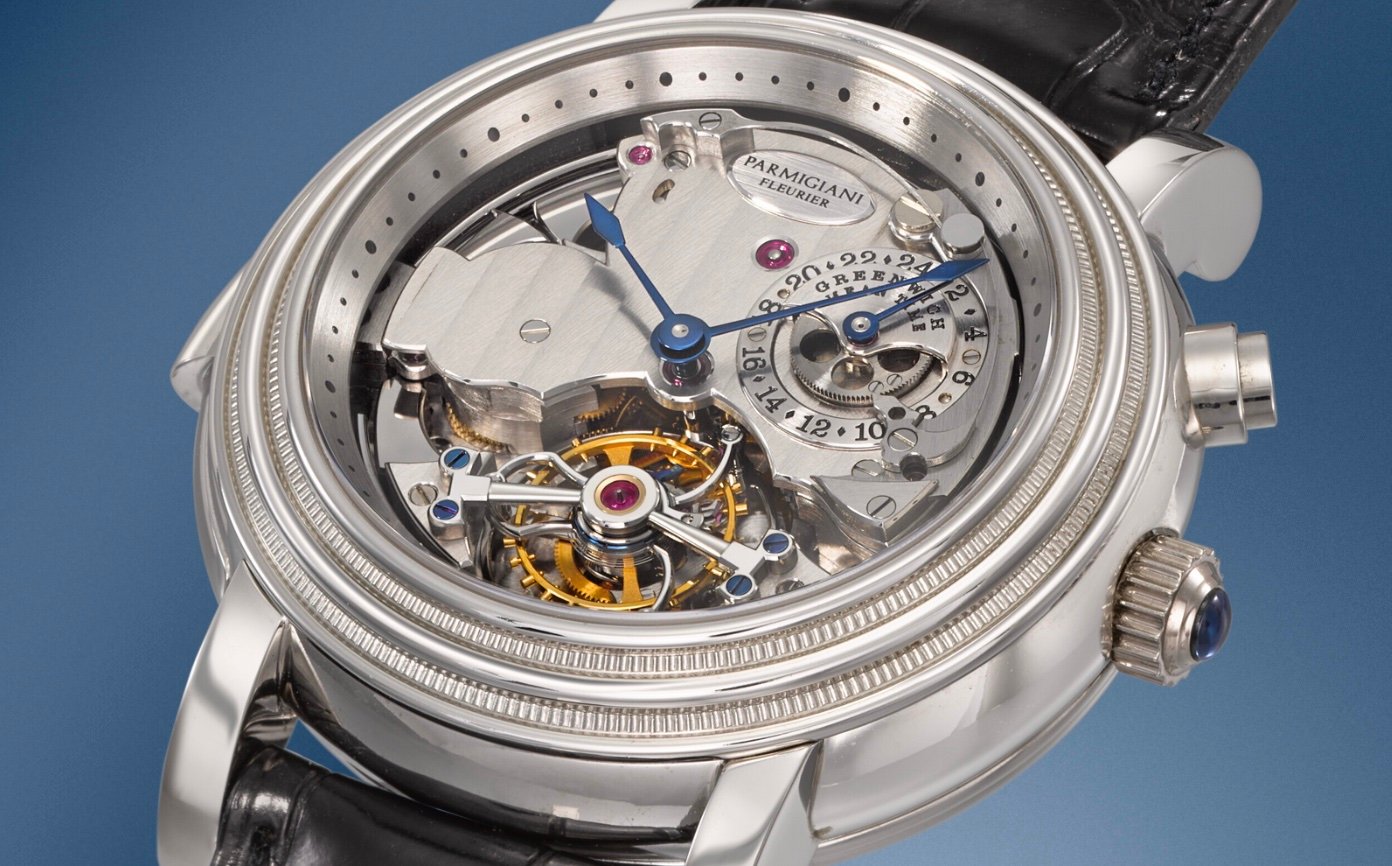 For around that same price, you could have also bought this Parmigiani Fleurier Toric unique piece from 2006. Whoever commissioned this watch wanted to make sure that he or she got a very complete package. It has a Westminster carillon, a minute repeater, a GMT function, and a tourbillon. And if all that isn’t enough, the 18K white gold case has also been engraved on the back with what looks like two horses. I really like the stepped dual-coin-edge bezel that’s so typical of the Toric collection. I could look for hours at this piece, but this one is also gone, having sold for CHF 189,000. That is roughly double the price that Christie’s expected it to sell for. 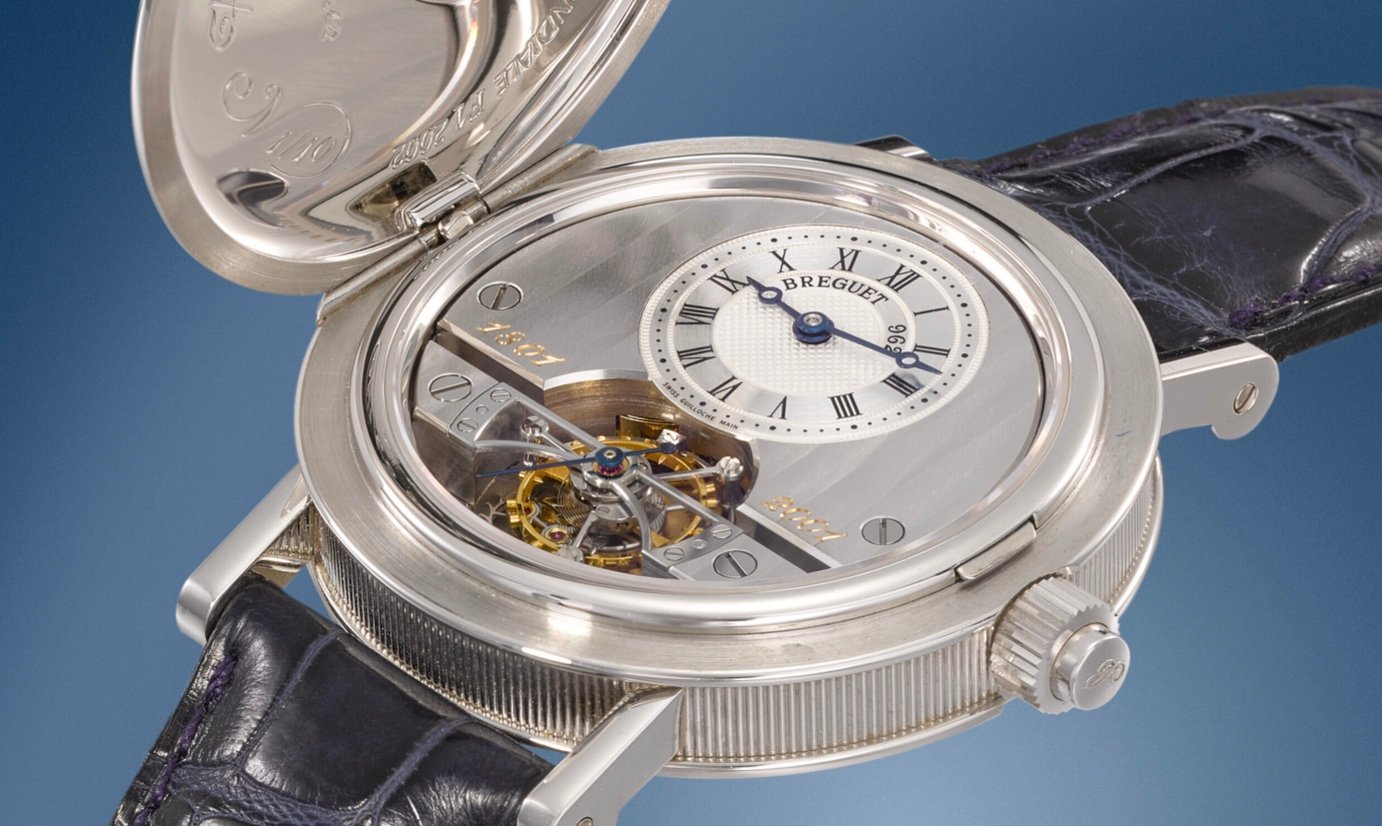 If you’re a fan of the tourbillon but only want to look at it when you choose to, this next one might be better suited for you. It’s a platinum Breguet ref. 1801 from 2003 with a half-hunter case. This means that part of the front of the watch is covered by a door with a beautiful guilloché pattern. When you open the door, you’ll be able to look at the personal engraving on the inside and the glorious tourbillon underneath. This one sold for CHF 126,000, about CHF 6,000 more than was expected. 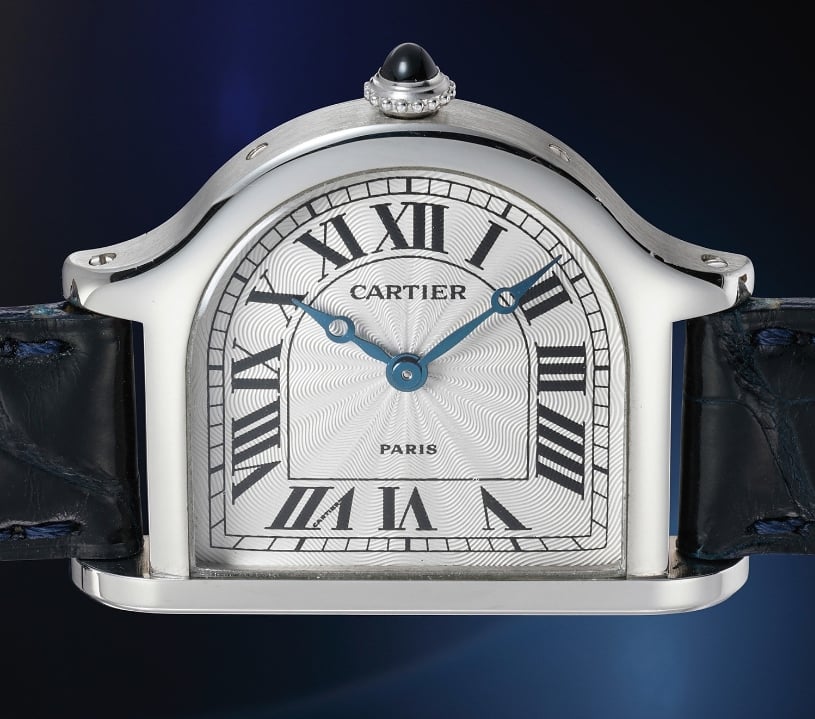 Going once, going twice, I’m out!

Well, I must say I had a lot of fun going through all these listings. I can imagine those viewings must be fun to attend. Maybe next time I’ll try and ask someone if I can tag along to one of these auctions. I’m sure I missed many other significant watches this time, but these were some of the most interesting to my untrained eye.

Did you attend these auctions, or did you follow along online? If so, let me know in the comments which pieces caught your attention.