Happy Monday, dear Fratelli (or good day to you, whenever you’re reading this)! Today, I’d like to talk about a pair of words that I sometimes see misused among watch enthusiasts — “carat” and “karat”. As an American, I come from a country where both spellings are widely used in jewelry and watch-related media. And as the son of a jewelry-loving mother, I was fortunate enough to learn the uses of these terms very early on. Because of this, the difference between a “carat” and a “karat” always seemed clear-cut and super obvious to me, well into my early adulthood.

As I got older, however, I noticed other Americans misusing these words in print. Additionally, I saw both native and non-native English speakers from other countries using them in ways that contradicted my understanding. And these weren’t just any random people, oh no. They were people in the jewelry and watch industries, who I arrogantly thought should “know better”. That’s when I realized that maybe it wasn’t so clear-cut after all! So I’m here today to hopefully dispel any confusion about these terms. And sure, this knowledge may not completely change your life. But it may, someday, just prevent you from looking like a total doofus. As a big doofus myself, believe me; you’ll want any kind of a leg up that you can get! So let’s dive in with what is likely the most practical information first — a difference between a “carat” and a “karat” in American English. 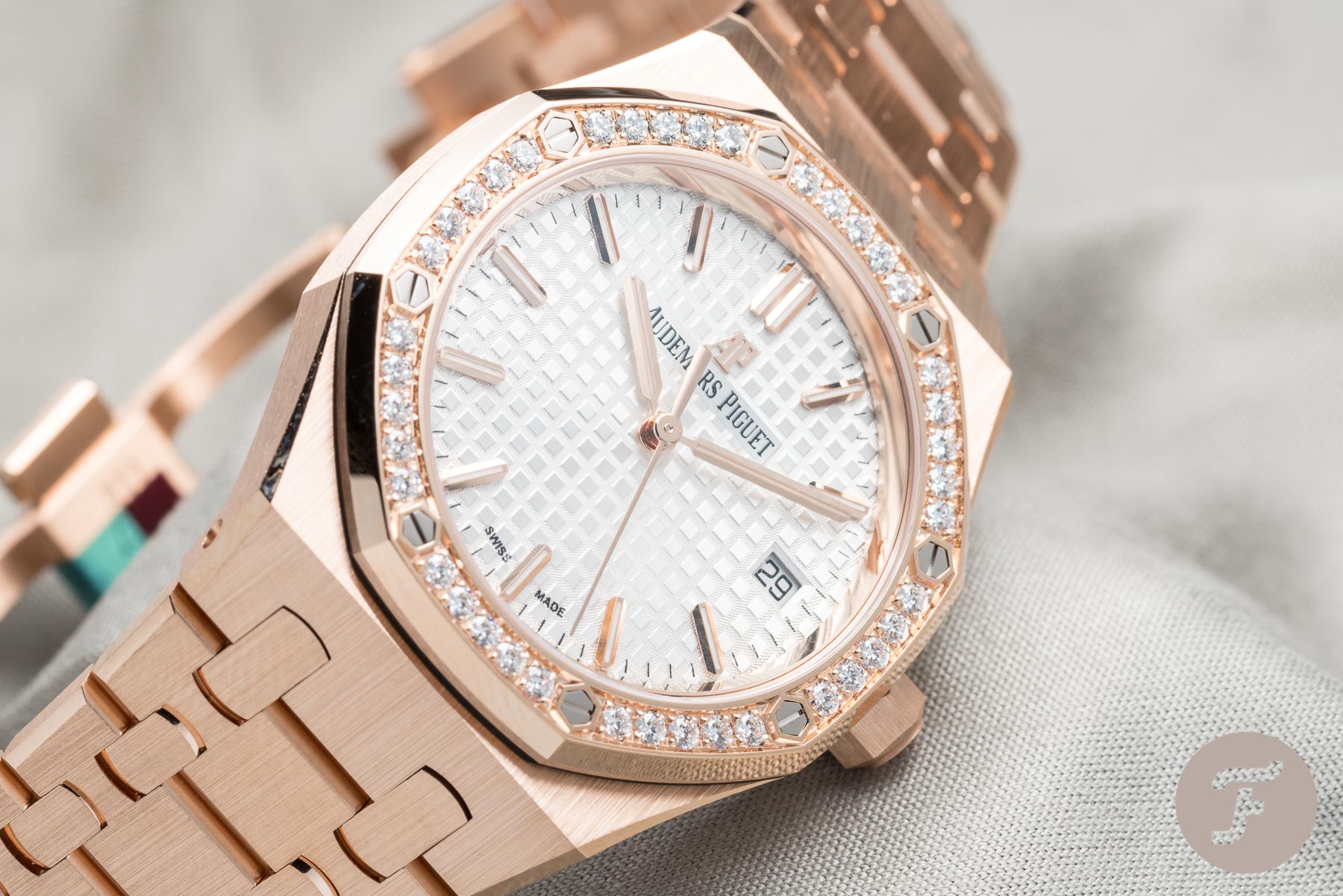 These days, in American English, the word “carat ” (abbreviated “ct“) refers to the weight of a gemstone. The word “karat” (abbreviated “K“), however, refers to the purity of gold. Take a stroll into any American jewelry store, and you will likely see many examples of this. You may notice a ring in “14K yellow gold” with a “2.0ct sapphire solitaire.” You may see an “18K white gold” pendant with a “0.73ct pear cut emerald.” And if you’re drawn to the watch display, you may even spot an “18K rose gold” Chopard Happy Diamonds Joaillerie with “5.01ct diamond total weight.” If you’re the type to notice spelling conventions, the difference seems pretty straightforward. So why is there such confusion?

Well, unfortunately, many Americans can’t spell to save their lives. This is especially true when it comes to homonyms (“there”, “their,” and “they’re”, anybody?). Alas, because “carat” and “karat” sound exactly the same, you may find a less-than-observant American posting on Facebook about how thrilled she is with her “3-karat diamond engagement ring! Like, oh my god!”

Alternatively, if you’re from a country other than the U.S., you may not even use the term “karat” at all. That’s because “karat”, as I later came to find out, was actually an American alternative spelling of “carat” that emerged in the 1850s. For better or worse, the American market has had such an influence on the global industry that many of the world’s jewelry and watch brands have adopted “karat” in reference to gold. However, that doesn’t mean that all have done so, nor does it mean that “14-carat gold” is actually “wrong”. Let me explain. 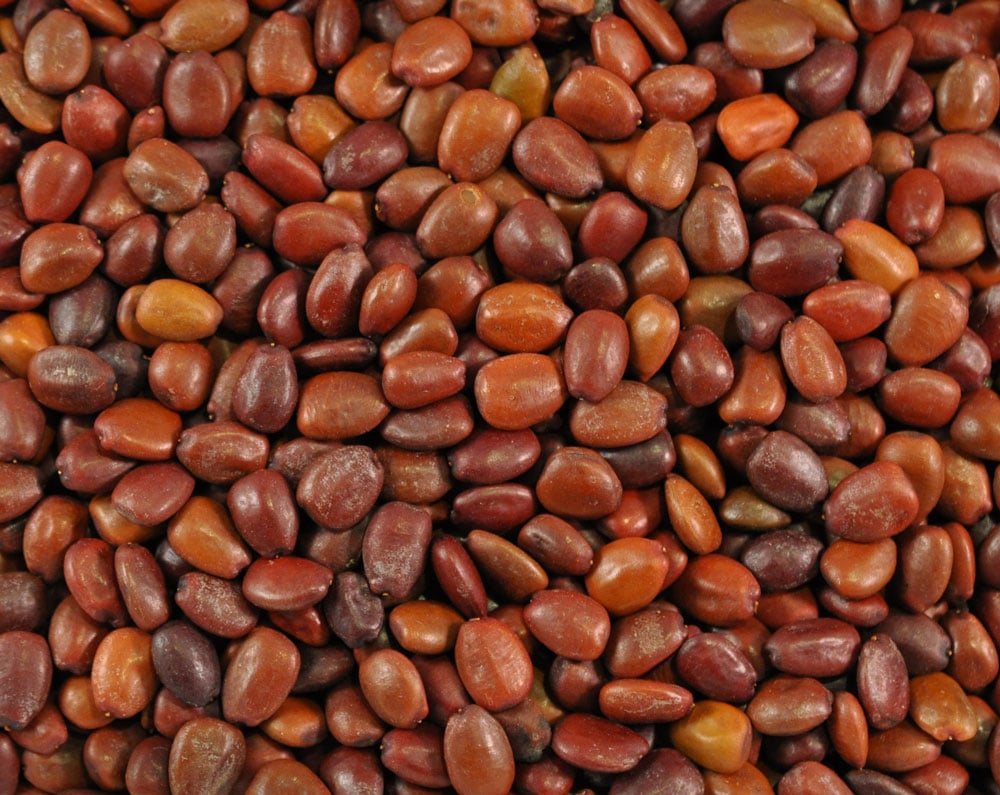 The origin of “carat”

Indeed, the term “carat” goes back much further than “karat.” It traces its roots all the way back to the ancient Greek word keration, meaning “carob seed.” Centuries and centuries ago, the seeds of the carob tree were used as a standard measurement of weight in the Mediterranean. People back then were under the impression that the weight of the carob seeds was remarkably consistent. We know today that, in fact, carob seeds varied in weight just as much as the seeds of other plants. But hey, people back then also believed that sneezing was an effective method of contraception, so I guess we can forgive them.

It was said that 24 carob seeds were equal in weight to the Roman solidus, a coin theoretically minted from pure gold. Over the centuries, the word came to mean a “1/24 part,” especially in reference to the purity of gold jewelry. The Greek word keration found its way into Arabic as qīrāt, medieval Latin as carratus, Italian as carato, and Old French as carat, before finally landing in English around 1550. Originally meaning “a measure of the fineness of gold,” for the first few decades, it wasn’t until the 1570s that English speakers also began to use the term “carat” as a measurement of weight for gemstones. 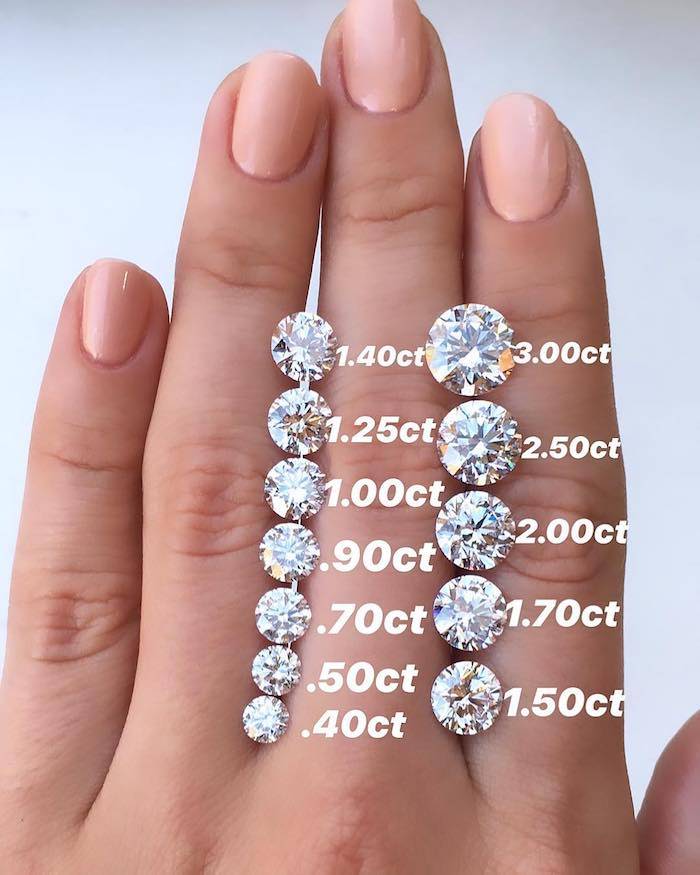 This dual usage of “carat” spread to other countries too. Today, the world still measures gold on a 24-carat scale, as well as gemstones by carat weight. When it comes to gold, the carat designation has always referred to the 24-part fraction of pure gold the metal contains. For example, 14-carat gold is 14/24 parts (~58.3%) pure gold, while 18-carat gold is 18/24 parts (75%) pure gold. That’s simple enough, right? With gemstone, however, it wasn’t always so straightforward. In fact, the exact weight of a one-carat gemstone actually varied from country to country for centuries! It wasn’t until 1907 that the “carat” was globally standardized to a weight of 200mg.

It’s unclear exactly why “karat”, in reference to gold purity, emerged in the U.S. in the mid-19th century. Perhaps Americans felt that the two distinct usages of “carat” needed some type of differentiation. I’d guess, however, that the switch wasn’t a totally conscious one. As often happens in language, words evolve naturally, only to be rationally justified years later. But whatever caused it, the distinction between “karat” and “carat” took hold, both enlightening some Americans and confusing others.

Some parts of the English-speaking world felt that “carat” was just fine as it was. Others gradually adopted the “karat” spelling, resulting in the global mish-mash we have today. With “carat” having more historical precedence as a measure of gold purity, it does make me wonder why “karat” wasn’t used for gemstone weight instead.  But, again, languages rarely evolve rationally.

Regardless of your nationality, it is helpful to remember that both “carat” and “karat” are widely used in the jewelry and watch industries today. Whether a company chooses to use “karat” or not is up to that company alone. You’ll notice in the screenshot from Rolex’s website above that the brand prefers the more traditional 18 CT (carat) designation for its gold.

Omega, however, takes the “new-fangled” approach, indicating the use of 18K (karat) Sedna gold on the rotor and balance bridge of its caliber 8901. While both of these companies hail from Switzerland, they are free to use either spelling. When it comes to the purity of gold, both “carat” and “karat” are internationally acceptable terms, no matter what any zealous know-it-all may say to the contrary. 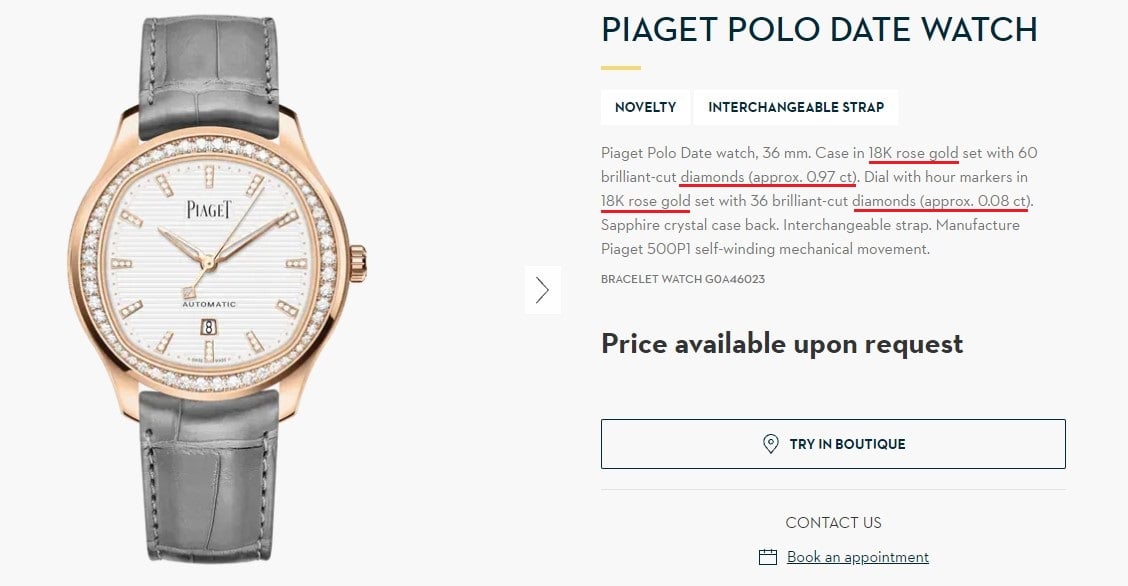 However, when it comes to the weight of gemstones, in English, “carat” (ct) is the only acceptable spelling. Piaget gives a perfect example of this on its website in the description of 36mm Polo Date. While the brand uses the newer 18K (karat) designation for its rose gold, it correctly lists the weight of its diamonds as “0.97 ct” and “0.08 ct” (carats). As you’d expect from a brand of such repute. It’s also important to note that a gemstone’s carat weight is not a direct indicator of its size. While a 1.5ct diamond will usually have a larger diameter than a 0.5ct specimen, “carat” only refers to the weight of the stone. A 1.5ct diamond weighs 300mg, whereas a 0.5ct stone weighs just 100mg. 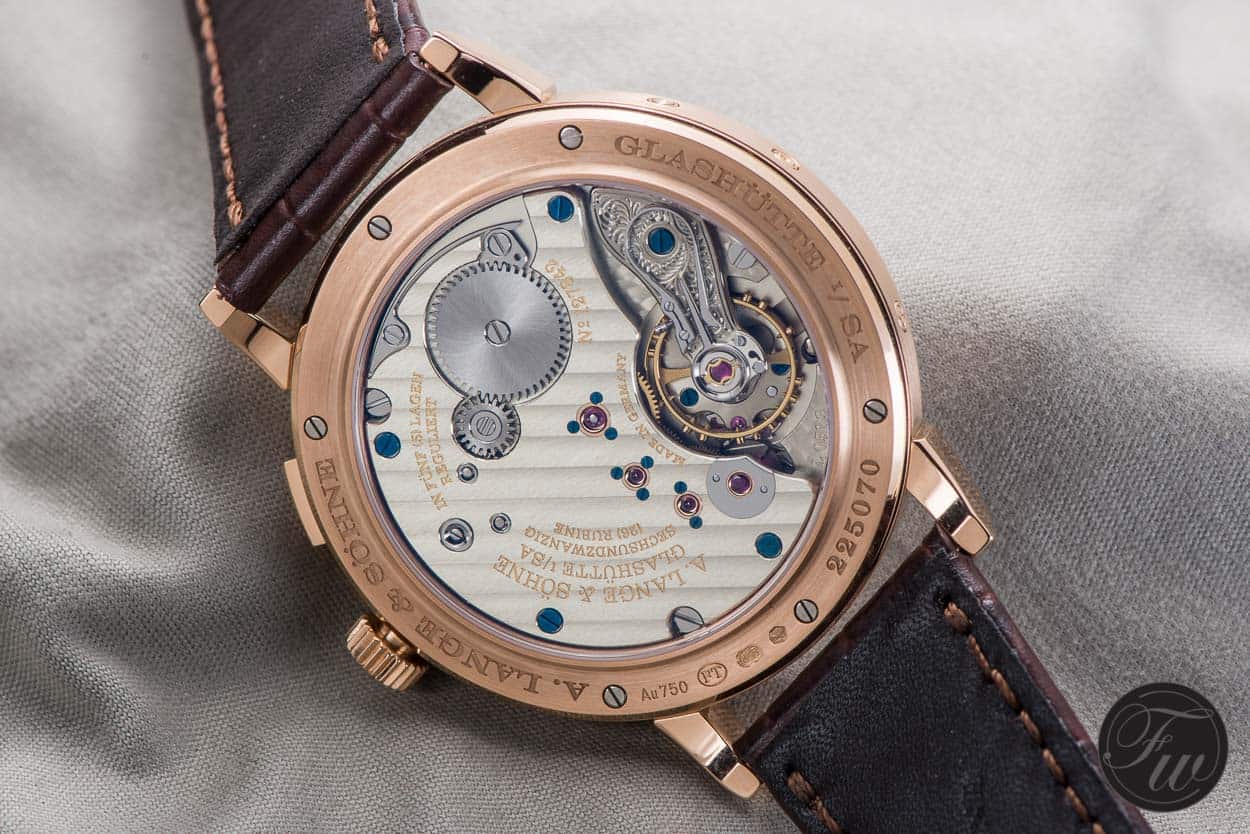 A few other things to keep in mind

In the watch world, 18K gold is certainly the most common type. With a higher density than stainless steel, a 75% pure gold alloy gives watches a noticeably luxurious weight, while still allowing enough wiggle room to experiment with color tone. Because different manufacturers use different alloys of gold, many in both the jewelry and watch industries use the term “Au750” for 18K gold. “Au”, of course, is the symbol for gold on the periodic table, and “750” means that 750 of 1000 parts (75%) are pure gold. If, like the A. Lange & Söhne 1815 Annual Calendar above, a gold watch case does not indicate “18K” or “18ct”, but it has the Au750 stamp, you can rest assured that it is 18K gold. 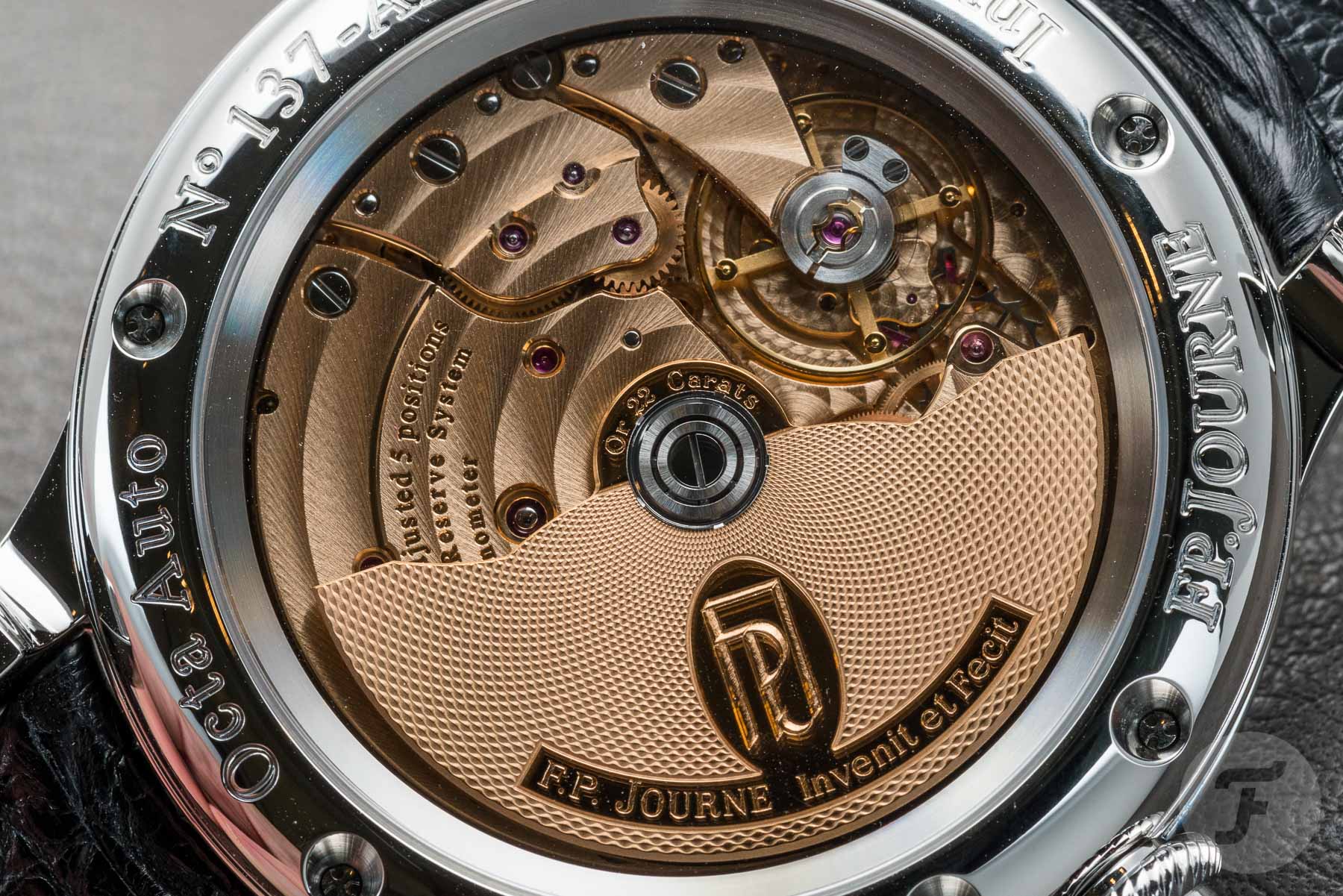 Additionally, the carat/karat designation of gold has different advantages in watches, depending on the component. While the plates and bridges of the movement in this F.P. Journe Automatique Lune are made from 18K gold, you’ll notice the rotor indicates Or 22 Carats, French for 22K gold. Like many other fine watch manufacturers, F.P. Journe chooses 22K gold for rotors because it is heavier than 18K gold. The extra mass of the rotor gives it more momentum, increasing winding efficiency. However, 22K gold is too soft to use on a watch case, so F.P. Journe uses 18K for all of its gold cases.

And with that, my friends, we come to the end of this little explanation. I certainly hope it was both educational and entertaining. But just in case you got lost in my wordy prose, remember this: depending on the country, both “carat” and “karat” can correctly refer to the purity of gold. “Karat”, however, NEVER refers to the weight (nor the size) of a gemstone. For gemstones, “carat” is the ONLY correct spelling.

The next time you see an arrogant American claiming, “It’s not 18-carat gold, it’s 18-karat gold!” or someone mistakenly talking about a “2.5-karat diamond,” you can smile to yourself, knowing you are smarter than both of them. Or, if you feel so inclined, you can point them to this article. We here at Fratello would definitely appreciate it. Have a great week, everyone!