Balazs and I arrived to the Doxa booth one afternoon at Baselworld 2017 for a meeting with Rick Marei, the General Manager and “spirit” of the lauded brand. If you’ve never met Rick, he’s unlike anyone in the established watch business. As someone who runs a business that sells entirely without distribution, you could liken him to the owners of most micro or start-up watch businesses. But – he runs Doxa and Doxa is no startup.   Sure, they’re not Rolex or Omega, but they’re a brand well known to those who dive or most who care anything at all about the history of watches. So, it’s interesting to hear Rick speak and how open and honest he is about what he’s doing, why he does things his way and to pick up on some interesting insights about the industry in general. The biggest plus, though, is that he has the ability to move quickly and release pieces that fans want. Today’s debut is a perfect example. So without further ado, let’s look at the Doxa SUB 300 Black Lung. 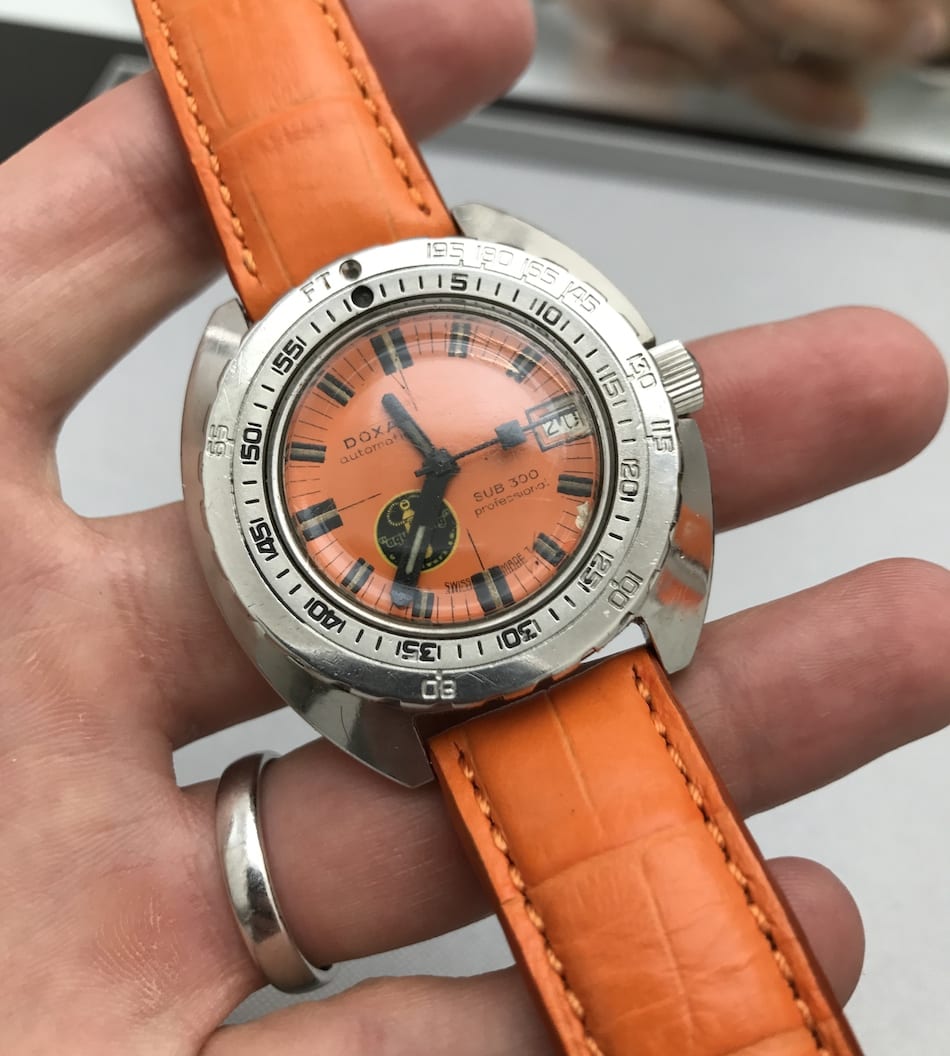 For 2017, Doxa didn’t show any novelties at Baselworld. Fresh from the release and serious coverage of the sublime 50th anniversary SUB 300 reissues, the brand was catching its breath and figuring out what to do next. When we asked about more vintage reissues, Rick gave a wry smile and essentially said that nothing was off the table and that he was considering all sorts of things. And then, he showed us what was on his wrist, swore us to secrecy, and mentioned that he wanted to create a limited edition of the cult-famous Doxa SUB 300 Black Lung. Of course, on Rick’s wrist was a real vintage Black Lung. 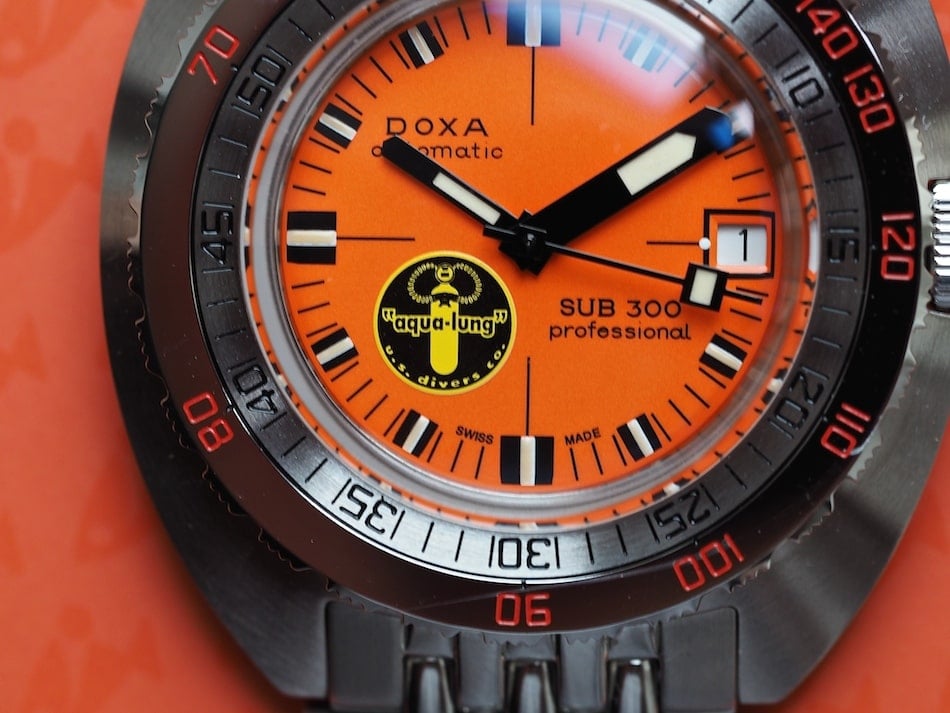 As the story goes, Doxa was testing its watches in 1967 and had signed an agreement with US Divers, which allowed them to place the logo of the dive equipment maker on the dial. Initially, a logo with a black background was tested, but this caused visibility issues when the hands (also black) were over the motif.  As a result, the US Divers logo became the black outline, with dial color background, that we know of today. But what became of the prototype black background watches? Well, apparently a bit more than 10 were made, some survived, and they took on the name of the Doxa SUB 300 Black Lung. Incredibly rare and appropriately valuable, these watches cause a serious stir when they come up for sale. So, yes, Balazs and I undoubtedly enjoyed seeing Rick’s “in the metal”. 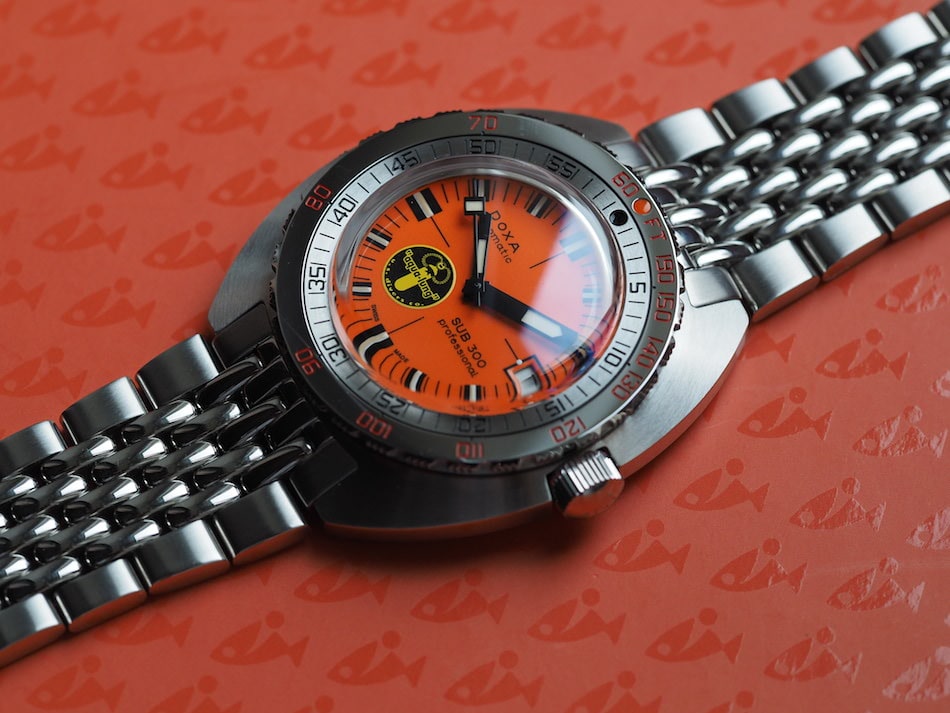 Similar to the 50th Anniversary Piece

If you’re familiar with the 50th anniversary SUB 300 pieces – the Professional, the Shark Hunter, and the Searambler – then the Doxa SUB 300 Black Lung won’t surprise as it’s the exact same watch physically. 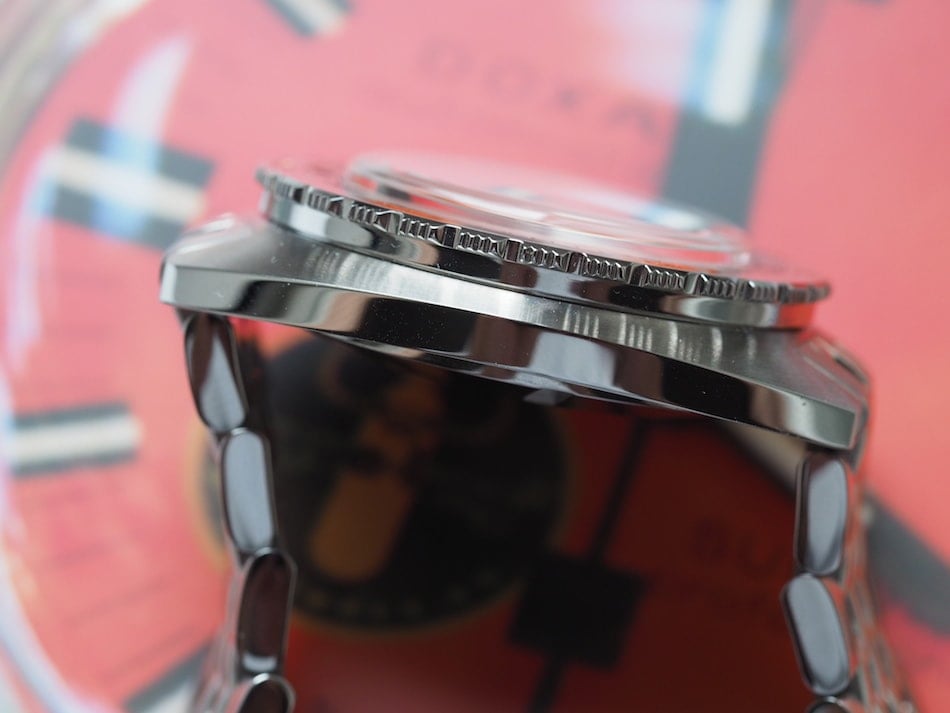 The classic 42.5mm stainless case, beads of rice bracelet, US Navy “no deco” bezel, and domed sapphire crystal are all here and they look sublime. 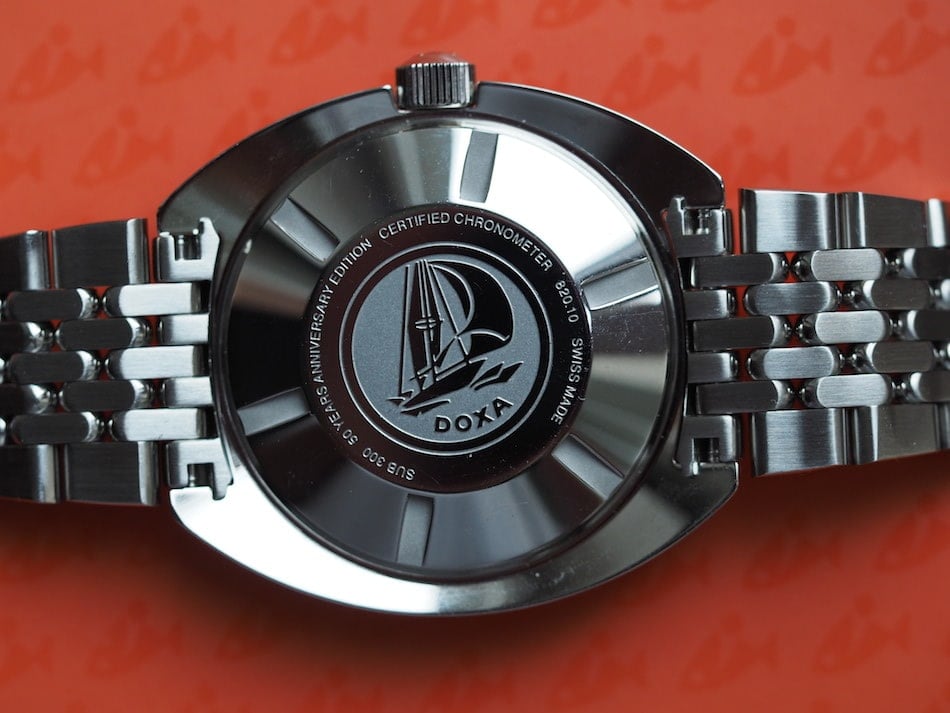 An ETA 2824-2 with COSC certification is included as well (as stated on the back and again, this is a prototype that I tested so assume the 50th anniversary comes off the case back). You may think that this was a bit of a “lay up” in terms of just issuing another variant on a watch that had already been created, but there’s a bit more to the story. 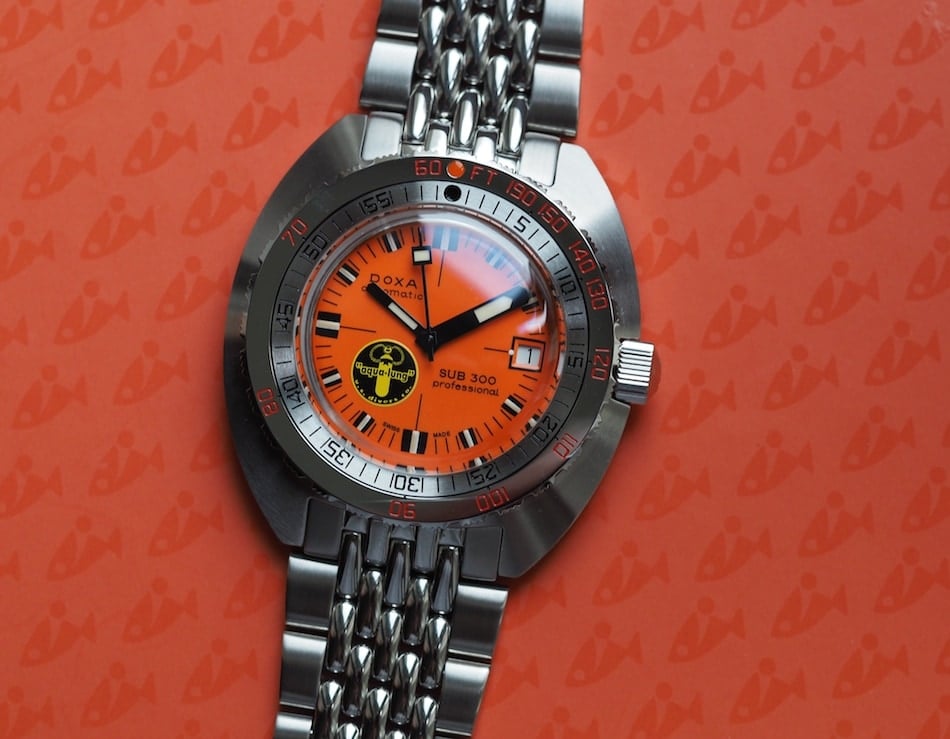 The Doxa SUB 300 Black Lung will ship in December and that essentially makes it a 2018 model. That’s significant because the year marks the 75th anniversary of Aqua Lung. If you’re a dive fanatic, you’ll note that US Divers consolidated under the Aqua Lung in 1998.   A watch like this is the perfect celebration of a storied equipment brand and it’s great to see the two brands coming together again. 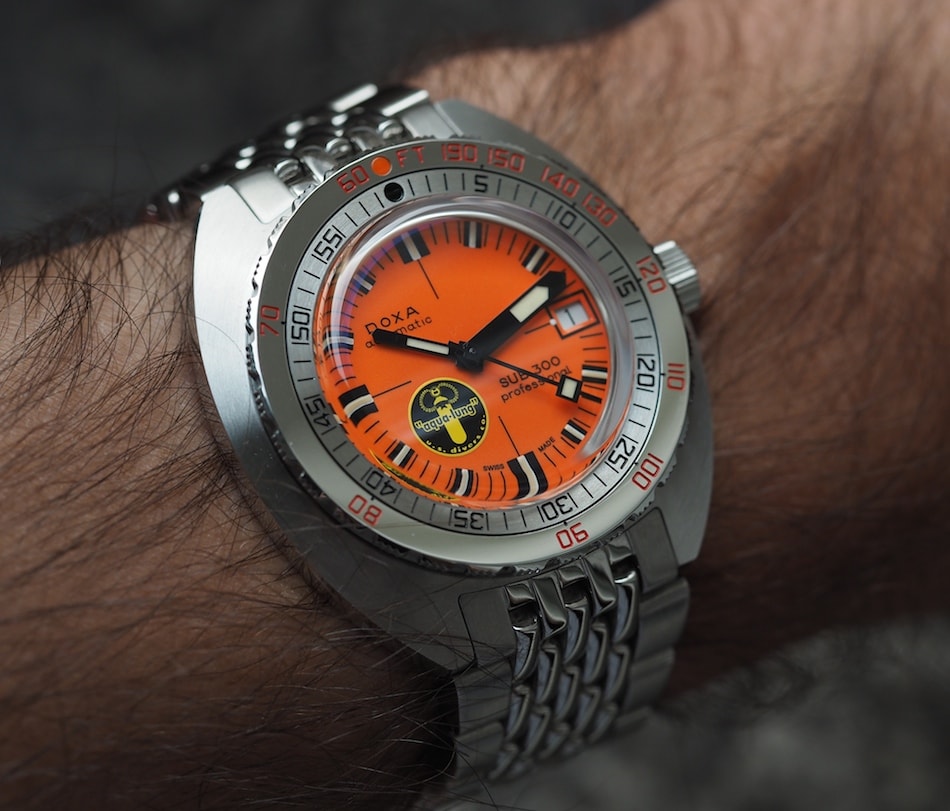 Hands-On and it’s a Beauty

You know our general disdain for using press photos here at Fratello Watches, so we’re thankful to Rick for sending over a Doxa SUB 300 Black Lung for hands-on testing. What I can tell you is that this watch is fantastic. 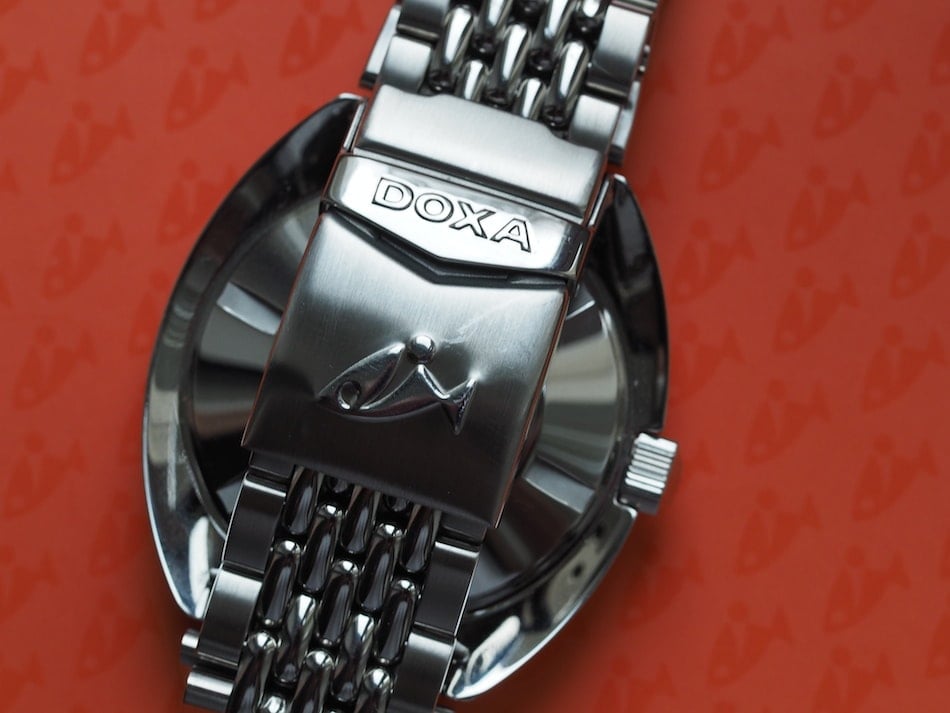 It wears like a vintage watch and that includes some good old-fashioned bracelet rattle (I love the stamped end links and clasp). It’s slim, especially when compared to my later Synchron version, and the domed sapphire crystal is on a par with the Omega Seamaster 300 reissue I recently reviewed. 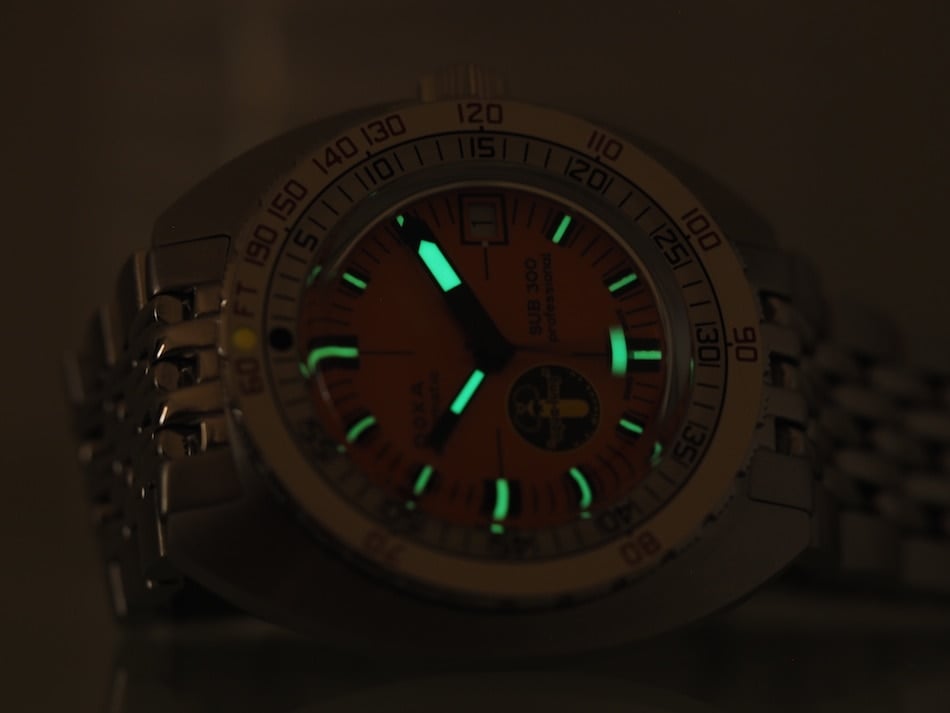 Despite the lack of vintage taper on the beads of rice bracelet, I still enjoyed it and found it very easy to adjust due to simple screws. One of the things I cannot stop staring at is the bezel. It’s so beautifully finished and the unidirectional bezel has such great weighting. It truly reminds me of precision equipment. 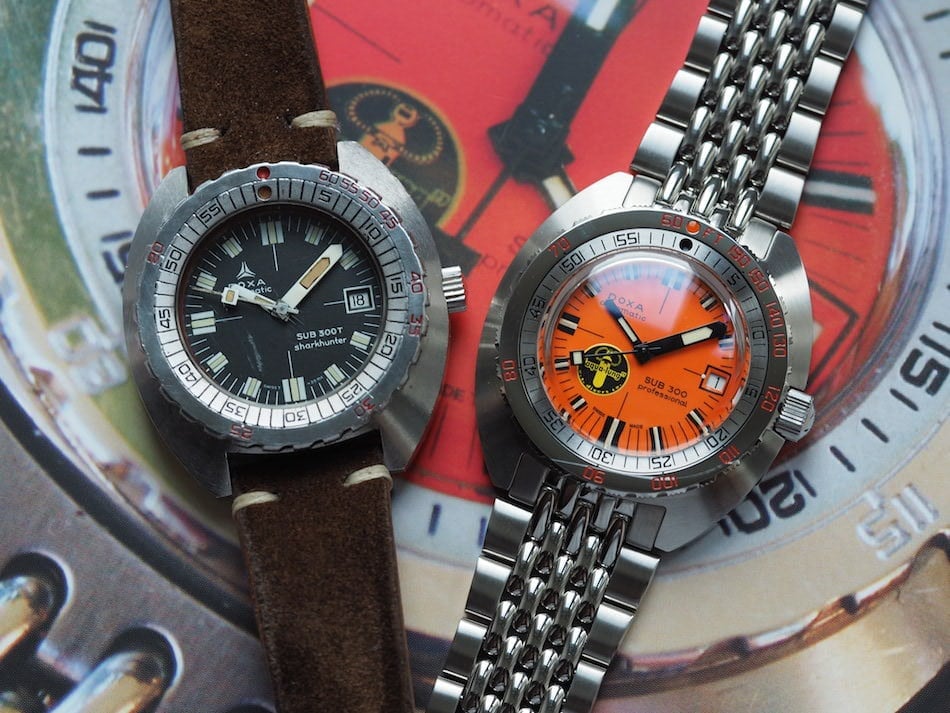 I was very close to ordering last year’s reissue, but I held off in the hopes of finding an original. That has proven to be a fruitless search, so I have already placed my order for a Doxa SUB 300 Black Lung. Doxa will only produce 300 of these gems, all in orange Professional guise – yes, far more than the original run of Black Lungs – and I expect that they’ll sell quickly. Pre-orders open today at a very reasonable $2,190. If any are left, the retail price will be $2,590. Frankly, I wouldn’t count on any left at the higher price.

For more detail, head to Doxawatches.com