What do you know about Zeitwinkel? If you’ve been around the watch industry for a while, chances are you’ve seen or heard of this small, independent Swiss brand at some point. Its most famous model, the Zeitwinkel 273° Saphir Fumé with its distinctive smoked sapphire dial, is a fine ambassador for the brand. As it turns out, it’s also something of a metaphor for the brand’s presence…

The Zeitwinkel brand has lingered on the edge of my consciousness for many years now. The 273° Saphir Fumé has floated in and out of my mind, a spectral figure quietly going about its business in a world of loud brands and showy watches. The watch, like the brand itself, is something of an under-the-radar classic in the making, offering an unusual (but palatable) style, a great manufacture movement, and a surprisingly reasonable price considering the amount of work done in-house. But it is not as well known as it should be. Like that less-famous-than-it-deserves-to-be dial, the brand is smoke. A curious and compelling idea that exists on the fringes of the norm. Let’s take a deeper dive into it for this week’s Topic of the Week…

Founded in 2006, Zeitwinkel is fiercely independent. As such, the brand has all the advantages and disadvantages of not being associated with a large group. It has free rein. It is its own master. But it doesn’t have the financial clout or multi-channel cross-pollination capacity of a conglomerate.

…a brand shouldn’t dive into this segment when it has good reason to.

Zeitwinkel products start at around the €6,500 mark. That places it right in the middle of a luxury warzone, with many of our favorite brands operating within the 5-10k bracket also. That’s not to say a brand shouldn’t dive into this segment when it has good reason to. But it is to say that those reasons have to be very good indeed. And so how does a small, subtle brand like Zeitwinkel imagine it can go toe-to-toe with these industry Goliaths? 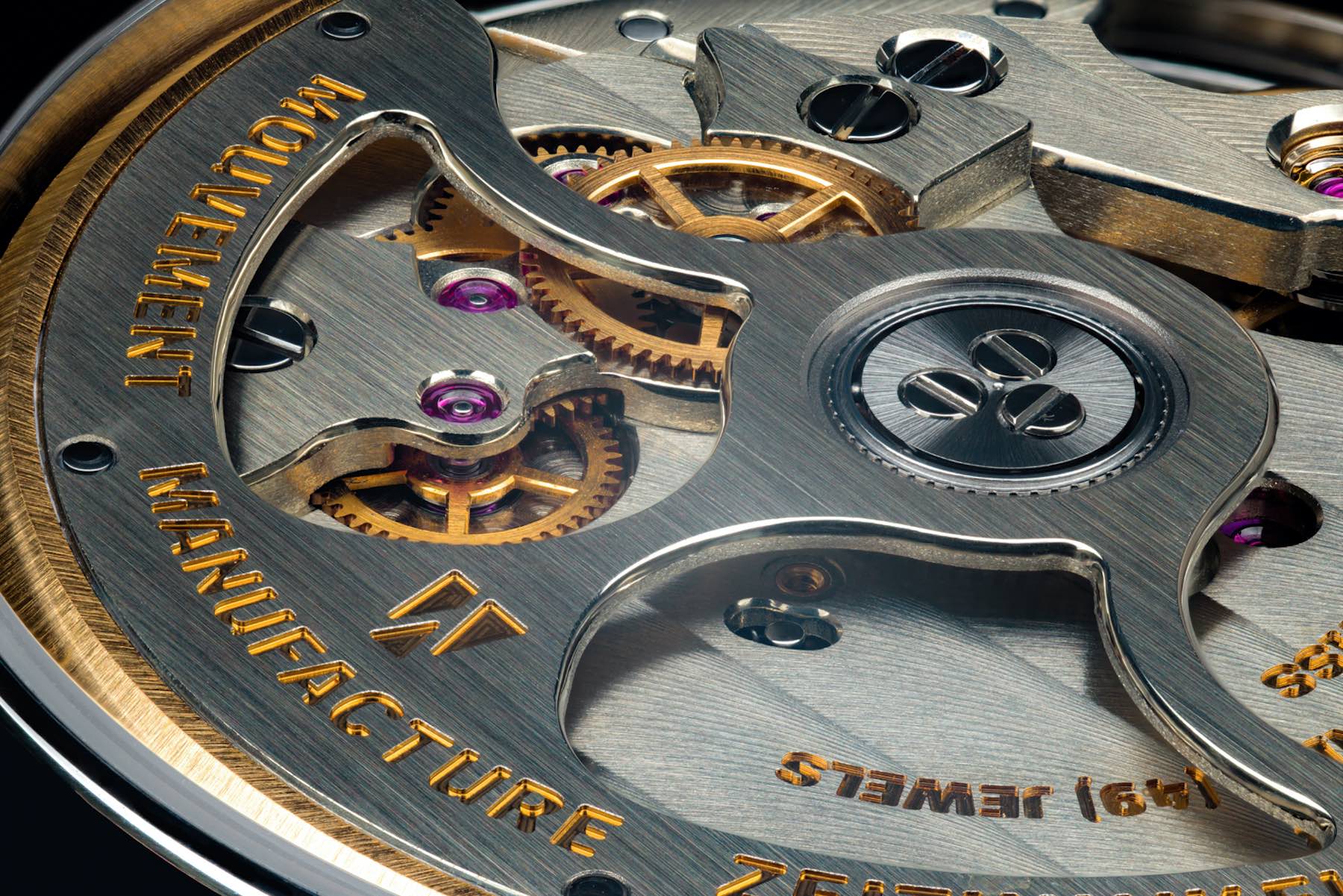 Finding your niche and finding a way to exploit it

“Zeitwinkel” means “time angle” in German, a measurement used to determine the true local time at a given location. In English, it sounds almost cutesy, but there’s nothing “cute” about the Zeitwinkel process or its products. These are serious timepieces. Manufacture movements crafted from German silver are the real stars of the show. 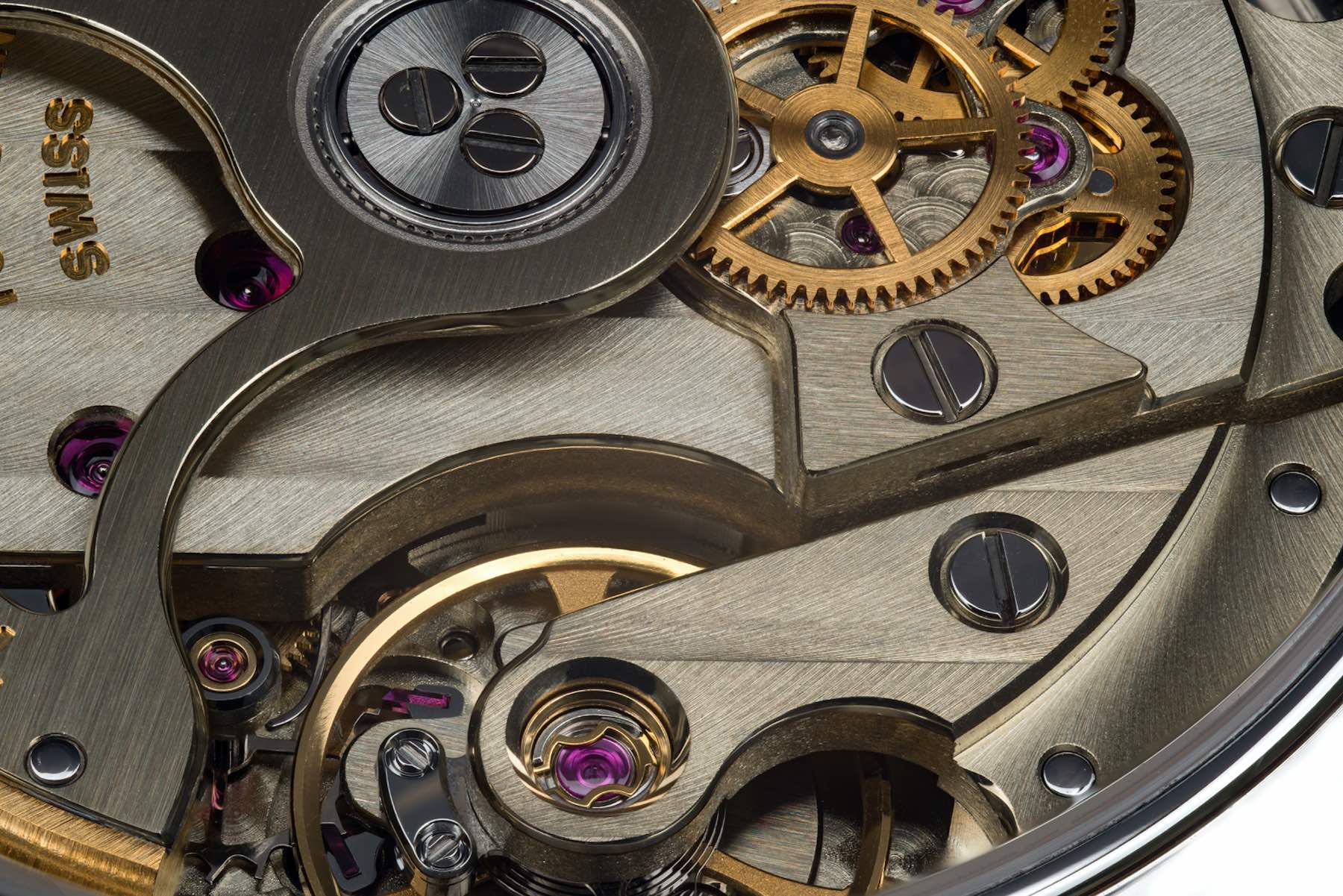 Perhaps the reason why that smoked sapphire dial of the 273° Saphir Fumé speaks to me so much is because of the movement it coyly reveals. I am a huge fan of German watchmaking. My particular weakness? German silver. I adore it in traditional Glashütte movements and wish its use was more widespread in the industry.

…the brand is passionately Swiss.

While it is available from a few German brands, it is rarer to see it used by a Swiss Maison. And as German as the Zeitwinkel name sounds and despite that some of the components — including the balance — come from Germany, the brand is passionately Swiss. So what we have here is a Swiss brand with a real German vibe. And that vibe isn’t restricted to the movements. No, the cases and dials also have a pretty Germanic style to them. Color me interested…

All Zeitwinkel watches are powered by “proprietary in-house calibers”, as the brand itself explains. These are assembled at the brand’s Saint-Imier headquarters (Rue Pierre Jolissaint 35, 2610 Saint-Imier, Switzerland). And, to be quite frank, they are really something. It took the Zeitwinkel team four years of research and development to come up with these calibers and, I must say, that looks like time well spent. 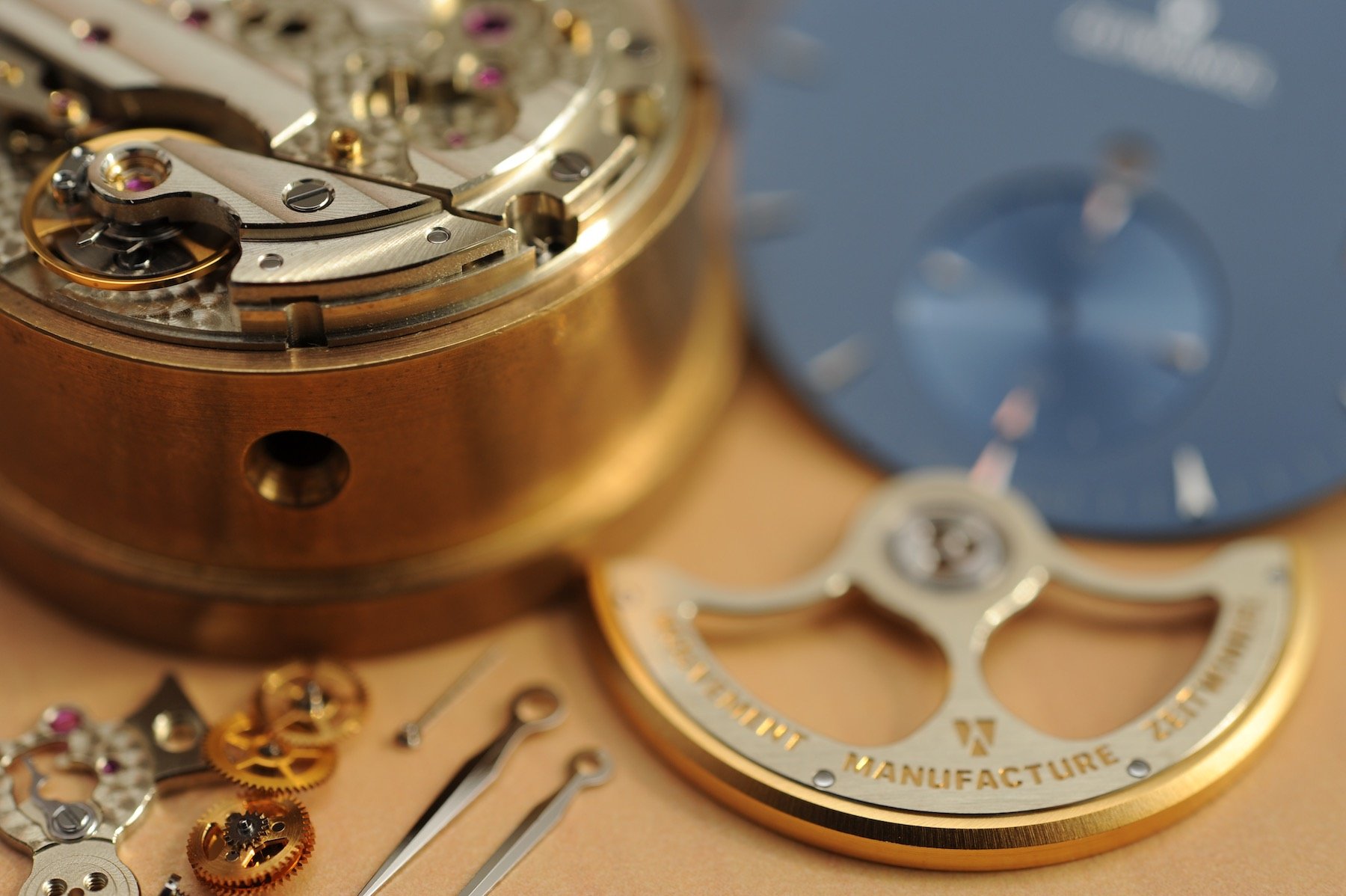 Let’s take the movement in the 273° Saphir Fumé as an example. This caliber, dubbed ZW0103, is an automatic, big date (at 11 o’clock) mechanism with a small seconds dial at 6. The movement has a hacking function, a quick-set date, a power reserve indicator, a 72-hour run time, a Glucydur balance, and an operating frequency of 28,800vph. The plates and bridges are finished with a mixture of anglage, Geneva striping, perlaging, and radial brushing (on the wheels). 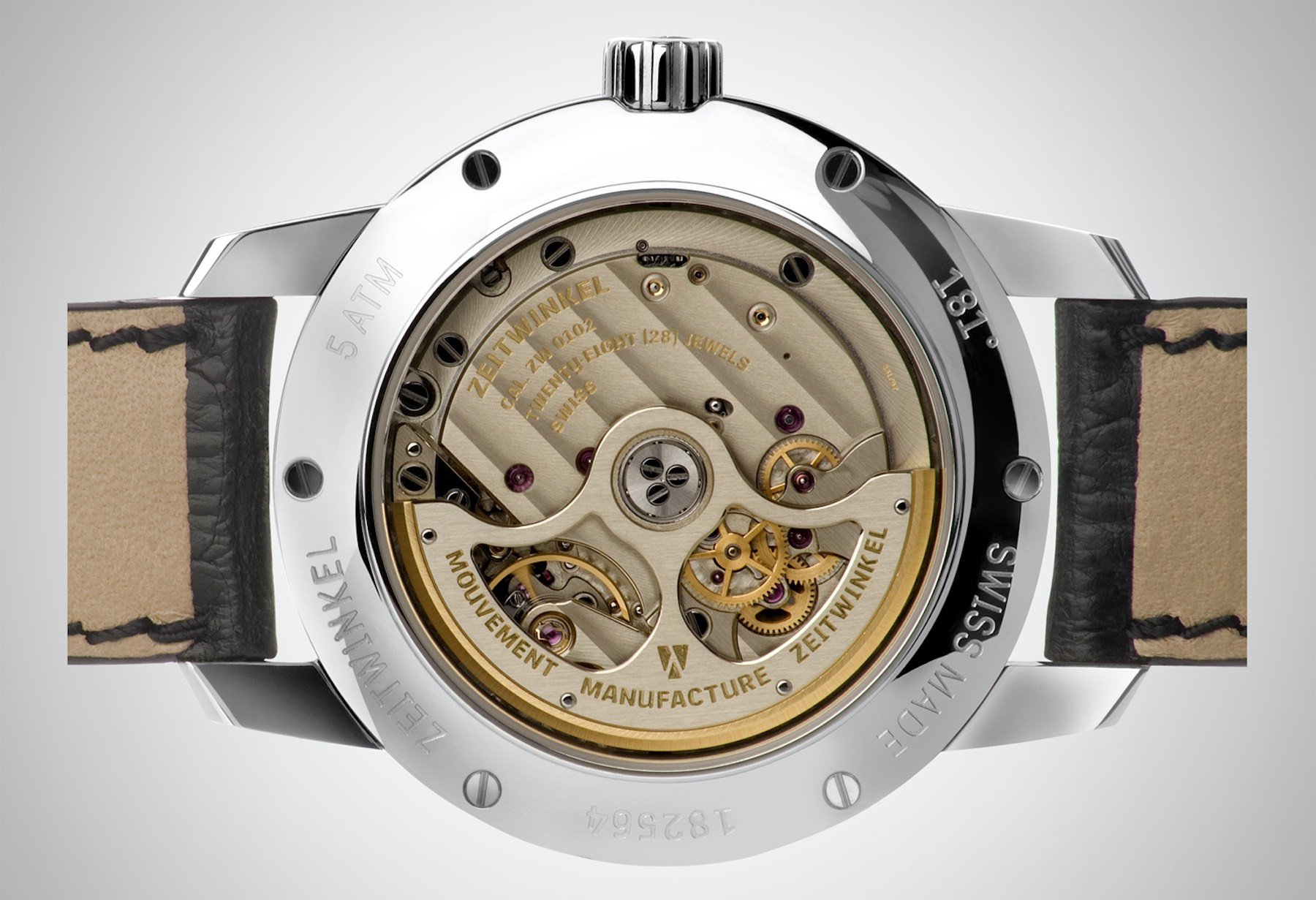 The Zeitwinkel 273° Saphir Fumé itself measures 42.5mm across and stands 13.8mm tall on the wrist. The sapphire sandwich construction ensures clear views from both sides. The smoked sapphire dial really adds to the watch’s luster in natural light, which I enjoy playing with. Contrasting finishes on a case water-resistant to 50 meters, along with a really sharply machined crown make this piece an elegant and oddly versatile watch.

I certainly think it works better in a more formal setting, but the softness of the gray sapphire dial does mean it looks fine against more relaxed fabrics like jeans or cotton. Basically, you don’t have to commit to wearing a wool three-piece around the clock if this aesthetic appeals to you, though I must admit it looks like it would be very much at home in Frankfurt’s financial district, challenging (actually) German brand Sinn for top-dog in the area. The price of the flagship 273° Saphir Fumé is €13,500. Learn more about the brand here.

Hot Topics
Introducing: The New Seamaster Professional 300M 60 Years Of Bond — With A Special Animated Case Back
104 comments
Are You Still After An Omega × Swatch MoonSwatch?
79 comments
It’s Time To Invest In A Dress Watch — Our Picks From Breguet, Omega, Grand Seiko, And More
71 comments
Sunday Morning Showdown: The Tudor Pelagos Provocation — Pelagos Vs. Pelagos 39
55 comments
The Rolex Waitlist Conundrum — How Much Will The Price Of Your Watch Increase While You Wait?
48 comments
Popular
Rolex Submariner – Historical Overview Of A Diving Legend
Robert-Jan Broer
22
The Ultimate Sports Rolex – The Explorer II Reference 1655
Robert-Jan Broer
17
Hands-On With The Seiko Prospex Dawn Grey Series
Robert-Jan Broer
12