Whether you find yourself in a misty forest or a foggy one, G-Shock has you covered with its four new camouflage models
Jorg Weppelink
comments 6
Share

Back in November, when winter was just around the corner, Lex advocated for a bit of color on your wrist during wintertime with the colorful G-Shock MTG-B2000XMG. I definitely agree with the principle of a bit of color on the wrist, especially when it comes to G-Shock. But I also feel that colors need to match the season’s colors. G-Shock has understood that perfectly and has released the Mystic Forest series. The series was first released in Asia at the end of 2021 and is now available in Europe and the United States as well. The series takes inspiration from the colors of nature and is perfect for all your winter outdoor expeditions.

We’re only a little over a month into 2022, and the stream of new releases has been pretty overwhelming. One of the releases, or rather, series that was released in January was the Casio G-Shock Mystic Forest series. G-Shock initially developed the series in collaboration with the renowned online streetwear platform Hypebeast. For this collaboration, however, both companies left their familiar urban environment and took inspiration from the colors of the forest. The result is four watches that look understated but are the perfect stylish outdoor winter statement. A month after their release in Asia, the watches have also been made available in other parts of the world. 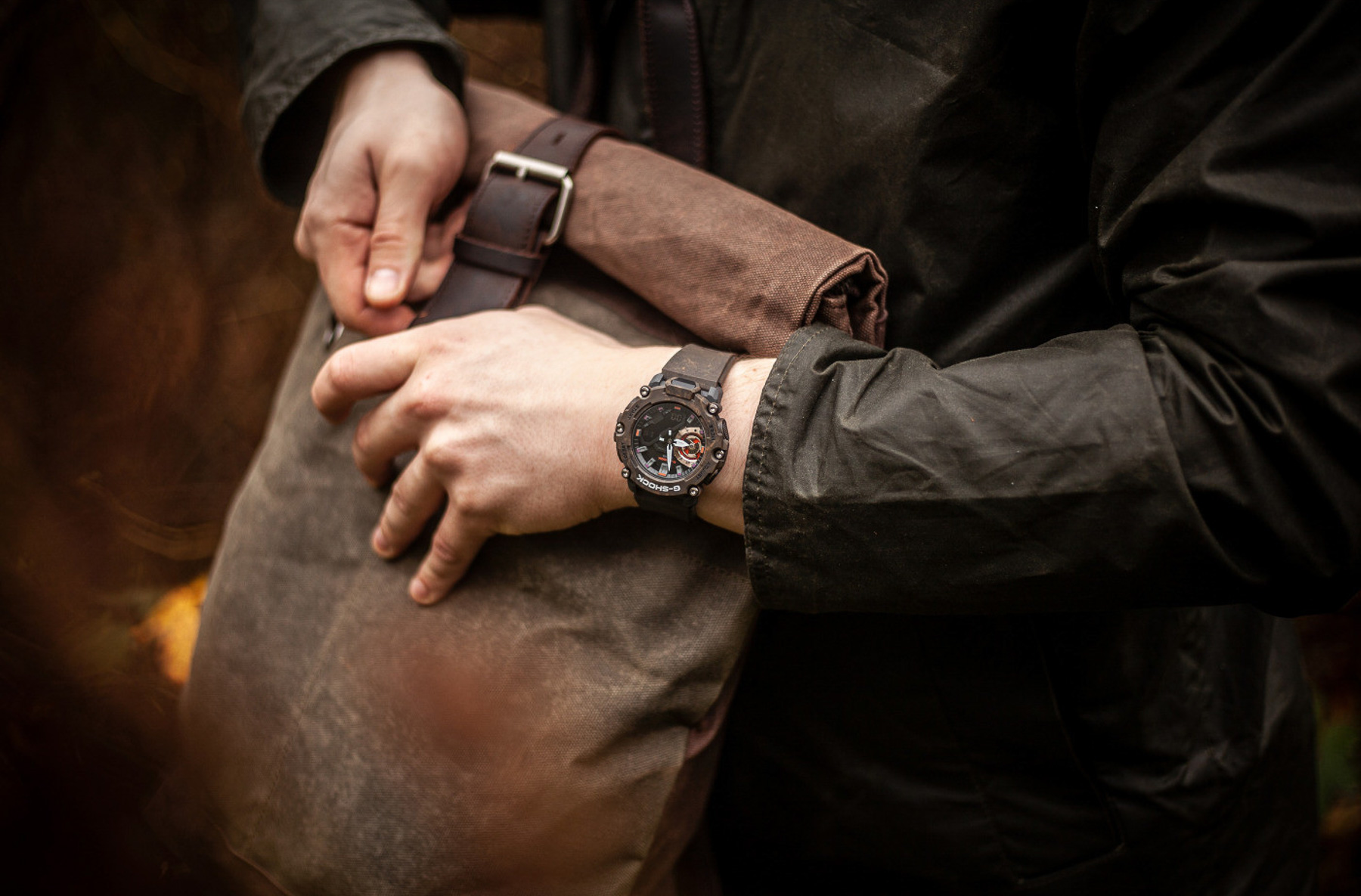 The Mystic Forest series consists of four watches that feature green and brown camouflage patterns. The first two models are the GA-2100FR-3A in green and the GA-2100FR-5A in brown. They are also known as the “CasiOak” models. The second two watches are the GA-2200 models. The first is the GA-2200MFR-3A in green, and the second is the GA-2200MFR-5A in brown. I love seeing these four watches as they offer a great combination of understated colors with a brilliant camouflage pattern. As a result, the watches do not stand out from a distance, but as you get a closer look, they reveal their stylish design details. 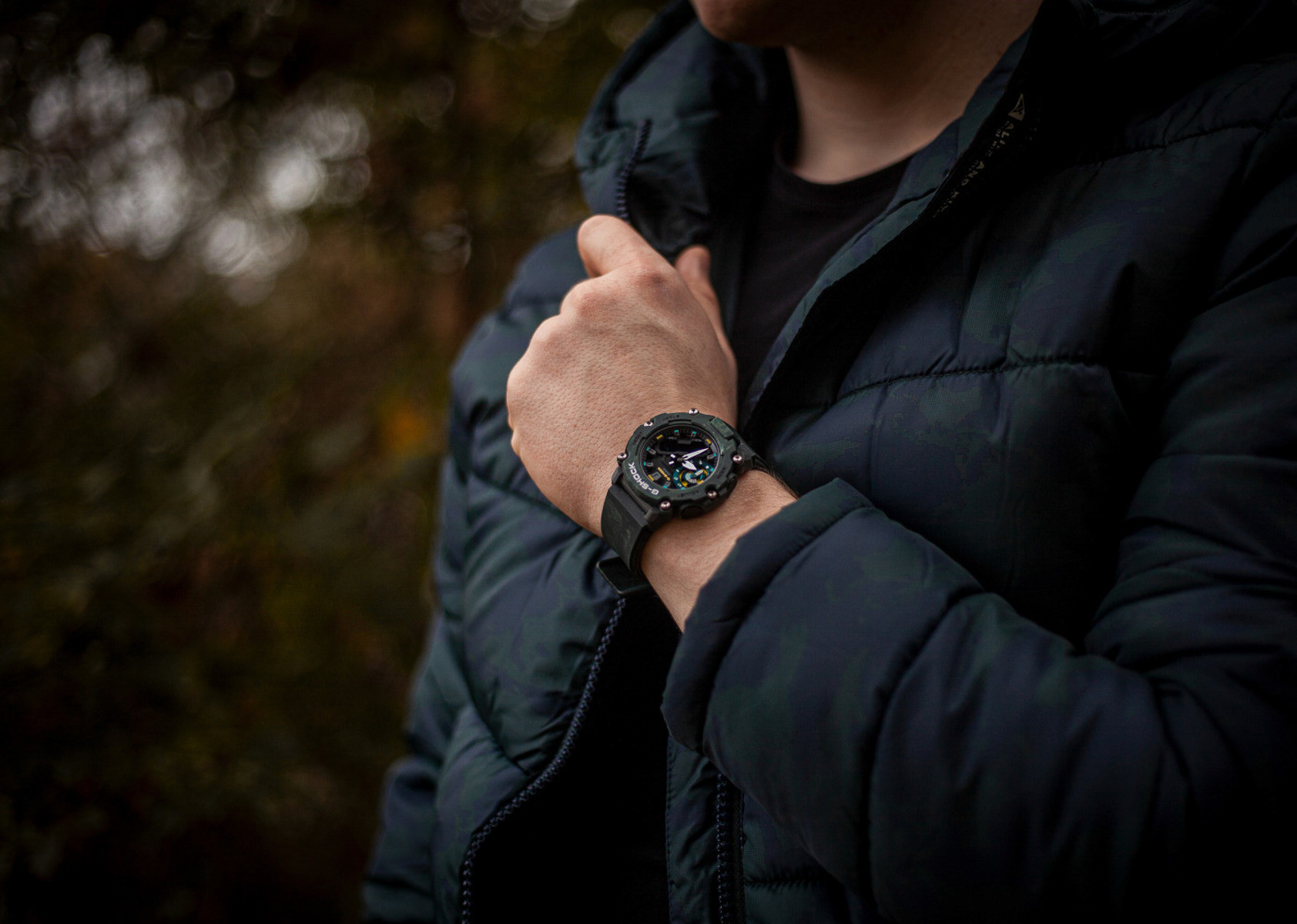 The designs are a result of G-Shock using mixed-color molded bezels and straps for this series. The brand uses different colors of resin for the mix-molded process that we have seen on the previously released marbled models. One of the great features of the technique is that it creates a unique pattern for every watch. I love how G-Shock constantly pushes the boundaries of material and color use. The colorful MTG-B2000XMG that Lex reviewed is a great example. Last year, I reviewed the equally spectacular MTG-B2000PH2A “Blue Phoenix” that was also a great testament to G-Shock pushing the boundaries of technology, colors, and finish. 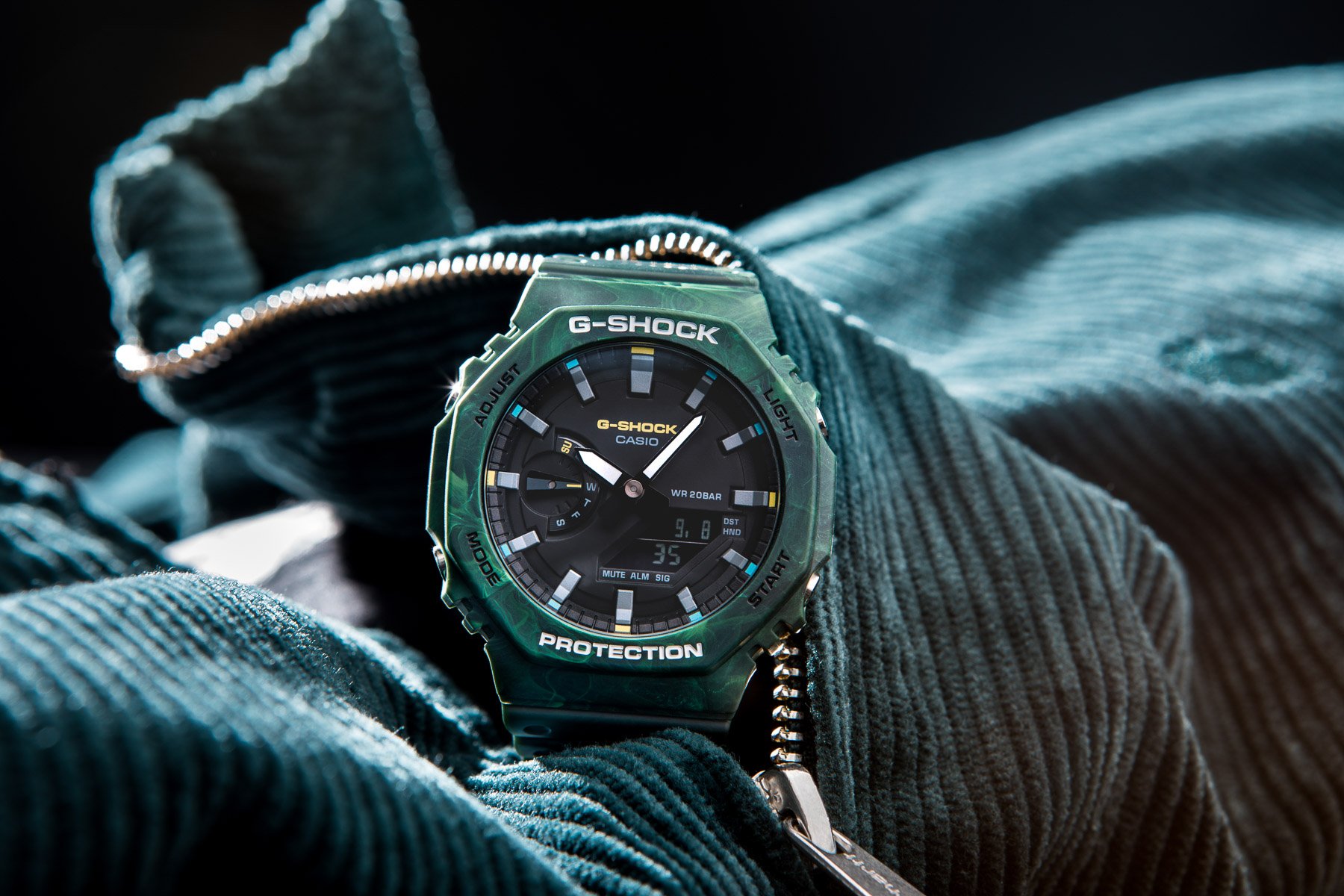 All four watches are hybrid analog-digital watches with a compact and lightweight Carbon Core Guard case structure and dual LED lights with a fully backlit LCD. The first two models are the GA-2100 models. The “CasiOak” case measures 48.5mm × 45.4mm and is 11.8mm thick. With a weight of just 51 grams, these two watches are very easy to wear. The GA-2100FR-3A in green features an inverted green-tinted LCD. The GA-2100FR-5A in brown features a “regular” inverted LCD. 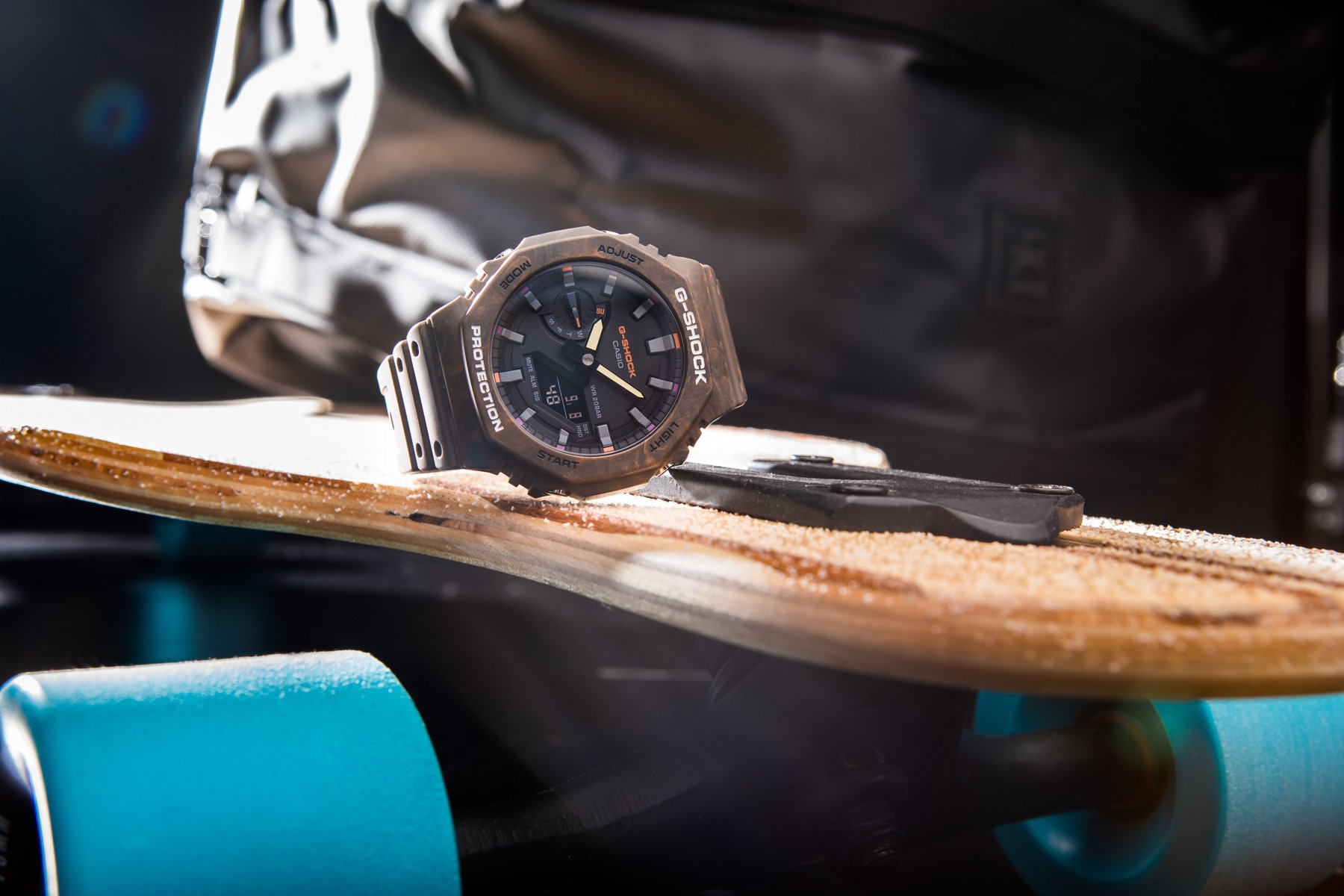 Seeing the two models side by side, you can see there is more to this than the overall color difference. The green model features blue and yellow details at the hour markers and yellow printing of the brand name on the dial. The brown model features orange and purple details at the hour markers and the logo printed in orange. My eyes are more drawn to the brown model, as the overall color is a nice rusty tone. I also love the combination of the orange and purple details better. 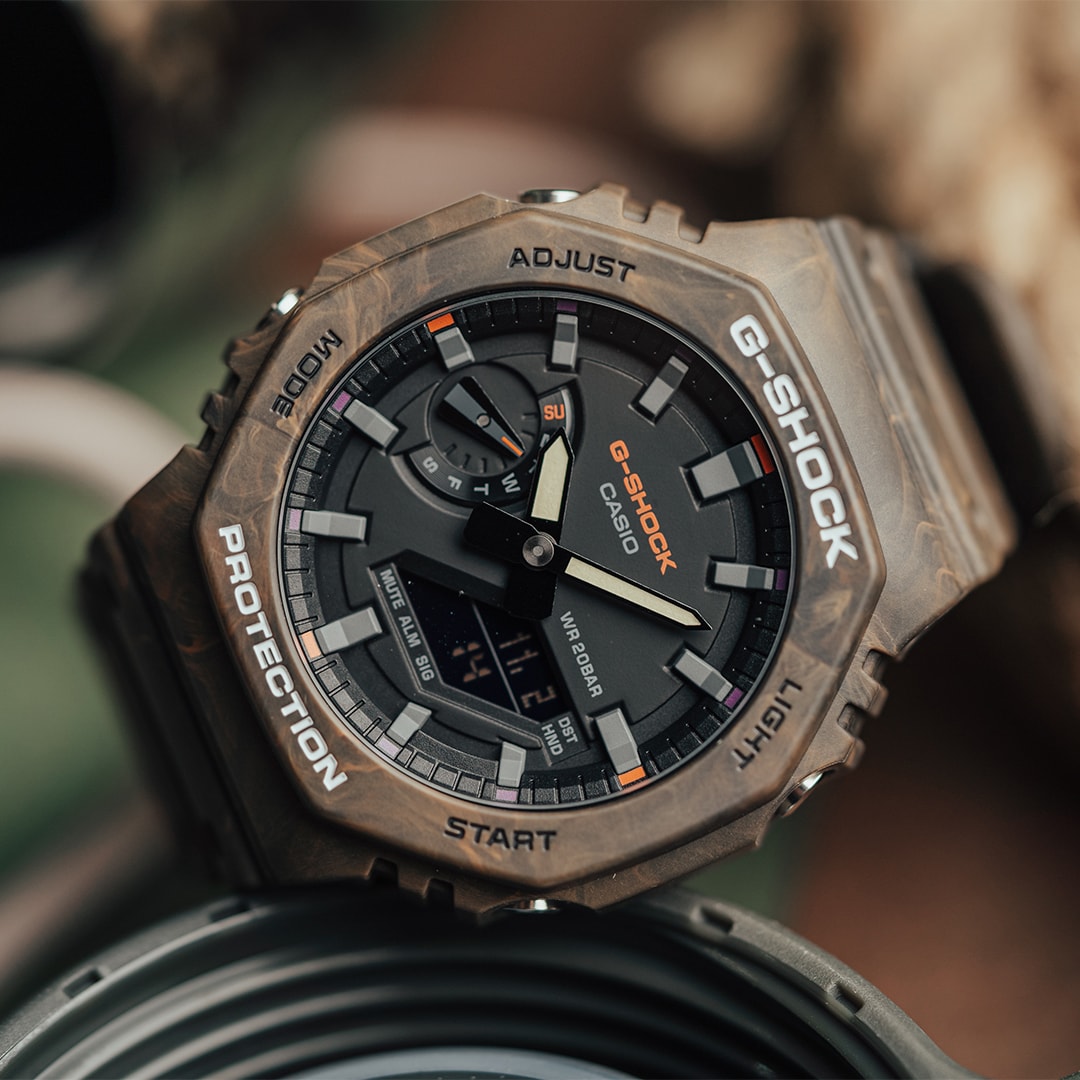 A set of familiar specs

Both GA-2100 models are water-resistant to 200 meters. The watches feature a wide array of functions that include five alarms, 29 different time zones, a 24-hour countdown timer, a 24-hour stopwatch, a fully automatic calendar, and the time displayed in 12 or 24-hour format. It’s the familiar set of specs we have come to know from G-Shock. 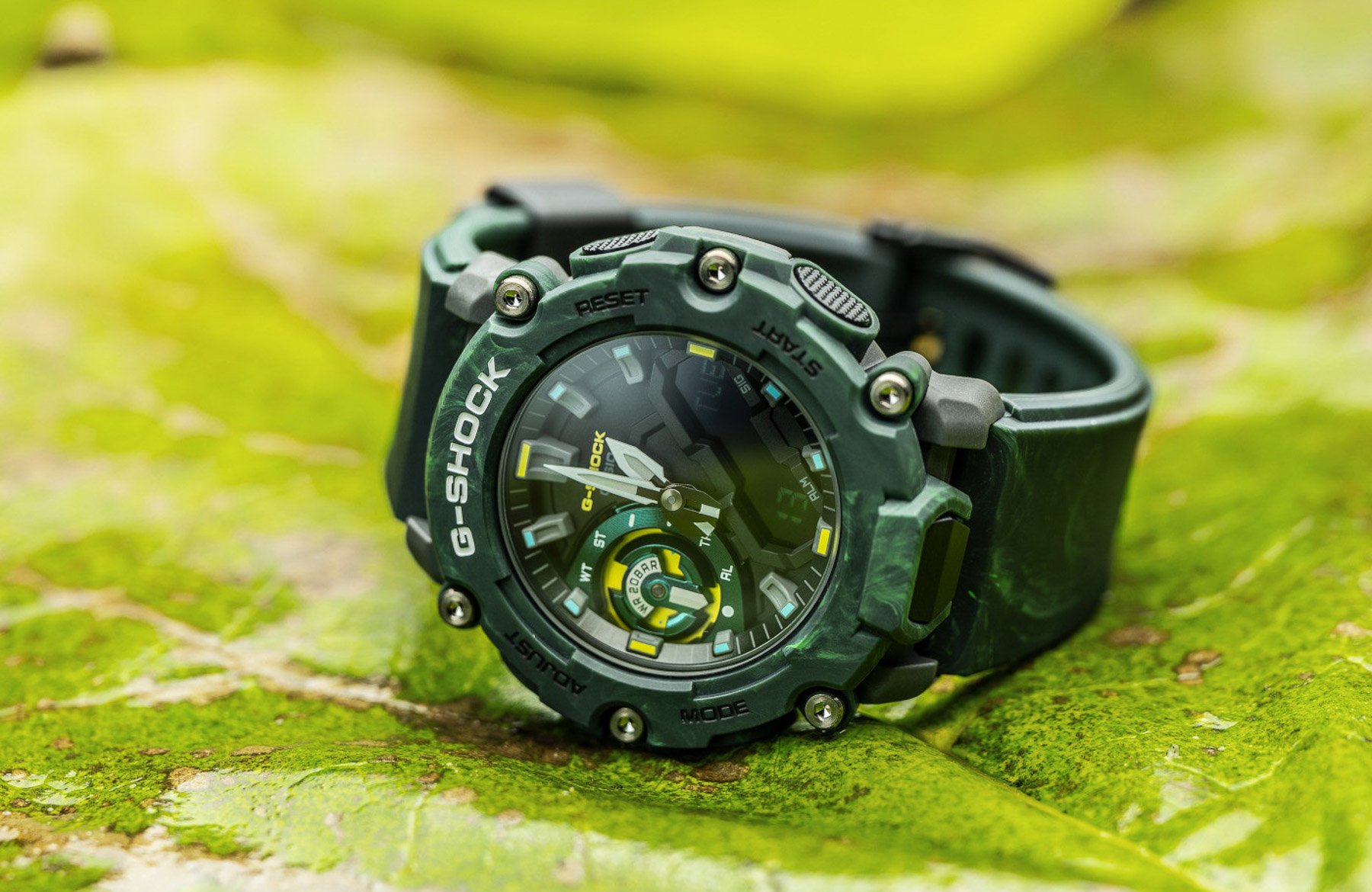 But despite the popularity of the “CasiOak” models, I prefer the two GA-2200 models. They are slightly bigger with cases that measure 50.8mm × 47.1mm and are 13.1mm thick. I like the design of the GA-2200 better with its round bezel and six characteristic bolts. Where the “CasiOak” models are stylish and slim, the GA-2200 would be my choice to strap to my wrist in the great outdoors. Despite their size, both models are very easy to wear at just 57 grams. Like the GA-2100 models, the green GA-2200MFR-3A features an inverted green-tinted LCD. The GA-2200MFR-3A in brown features a “regular” inverted LCD. 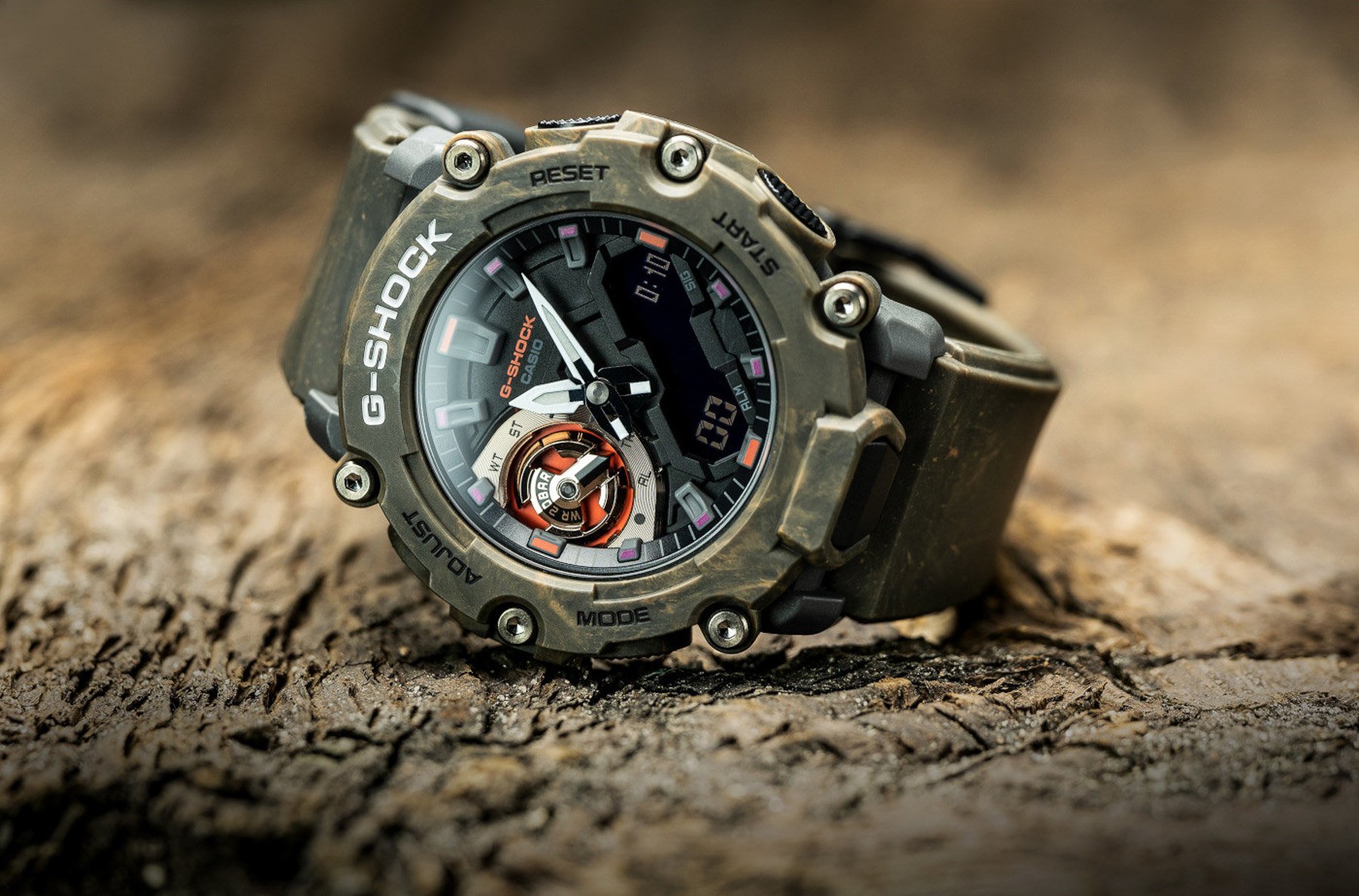 As you can see in the picture, the color scheme for both watches is the same as on the GA-2100 models. So it won’t be a surprise that my overall favorite is the GA-2200 in brown. The watch has a woody or rusty look that I like. It must be said that the shade of green on both models also changes more in different lighting conditions. As you can see in the pictures, the green color becomes a lighter shade in brighter light. In darker lighting conditions, the green watches become a lot darker overall. 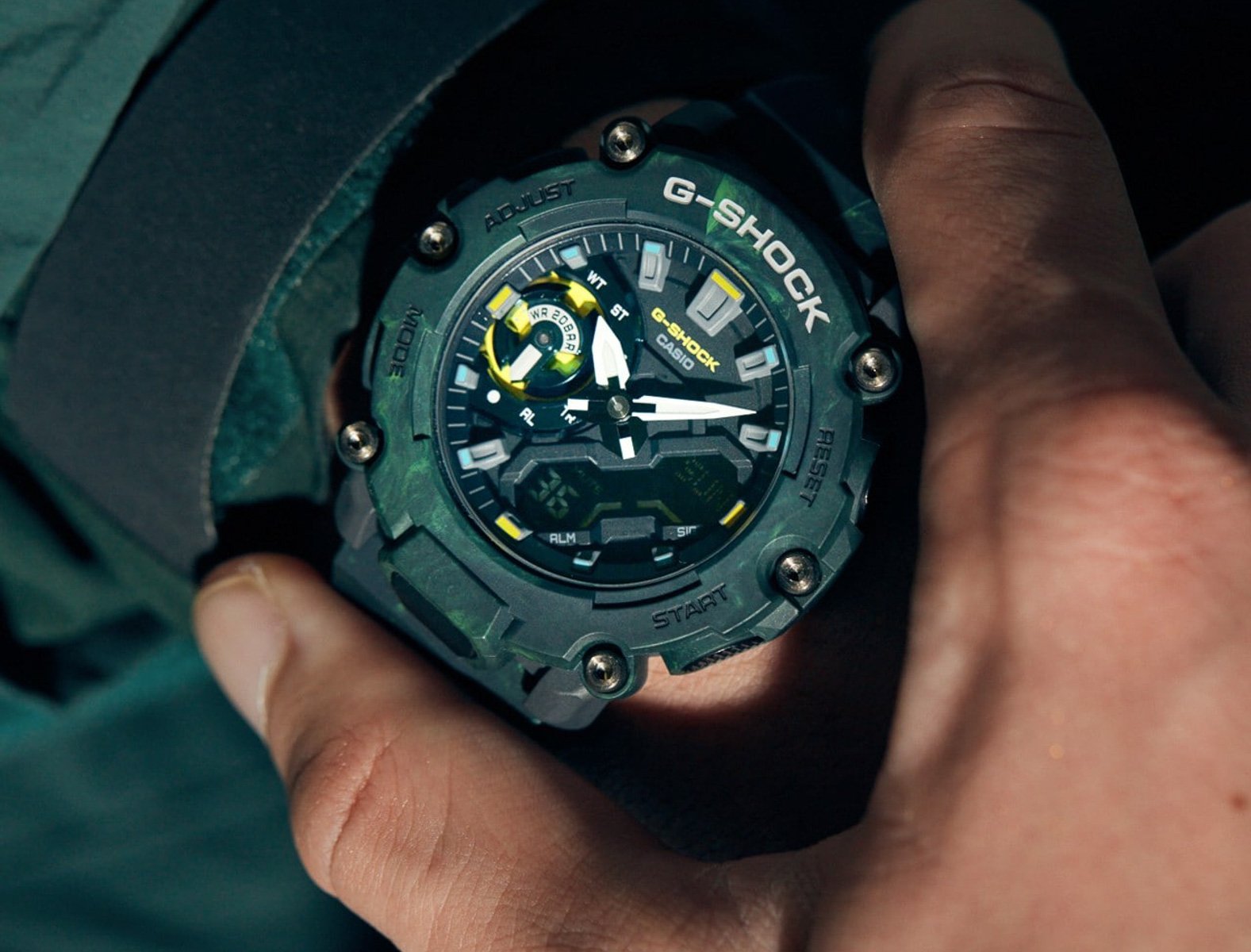 One main difference in specs

When it comes to specs, the GA-2200 models feature a similar set of specs as the GA-2100 “CasiOak” watches. They feature the same wide array of functions that include five alarms, 29 different time zones, a 24-hour countdown timer, a 24-hour stopwatch, a fully automatic calendar, and a 12- or 24-hour time display. The biggest difference is that the GA-2200 models are equipped with the Super Illuminator LED backlight feature. It lights up the dial brightly in darker conditions. 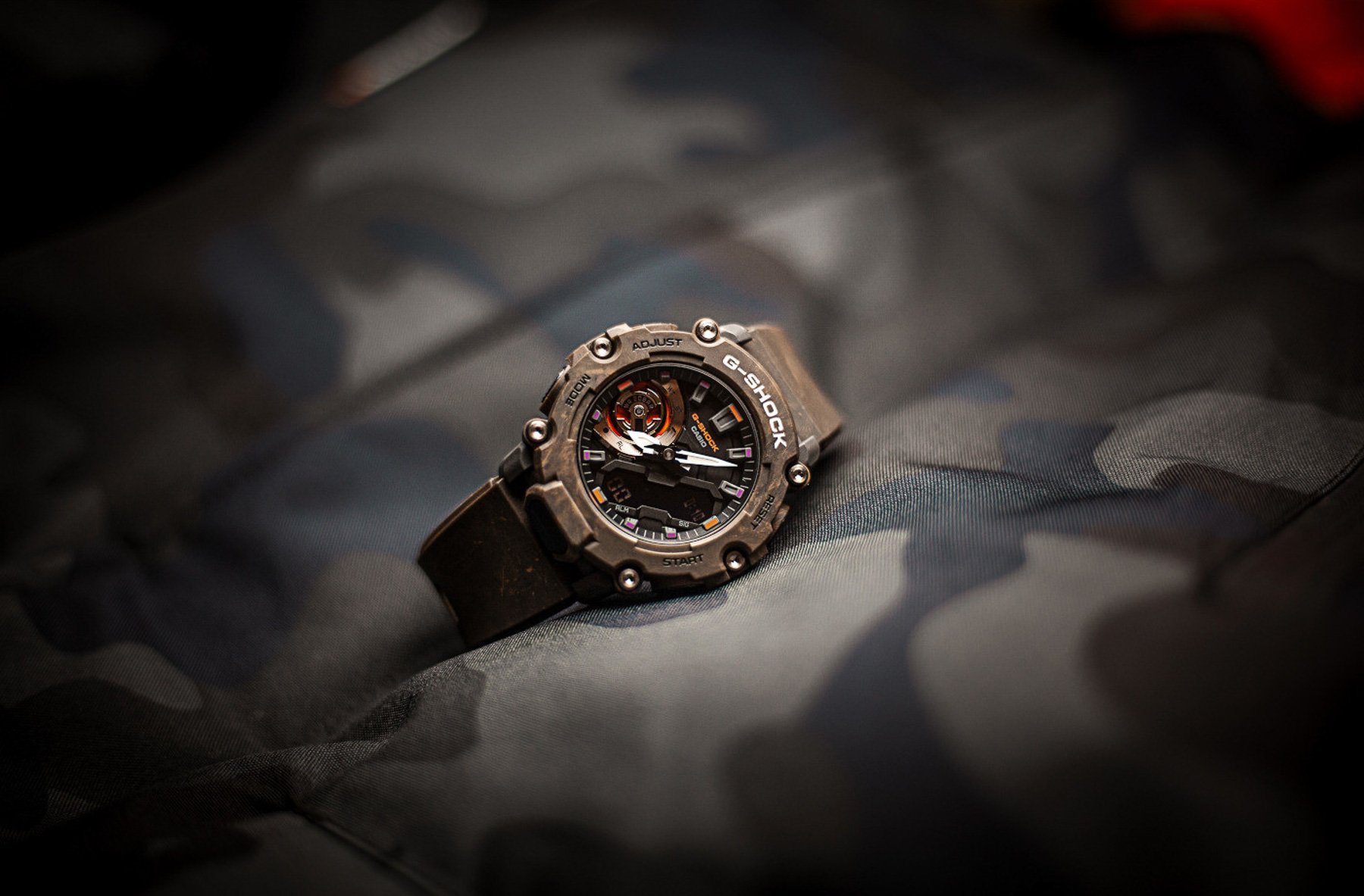 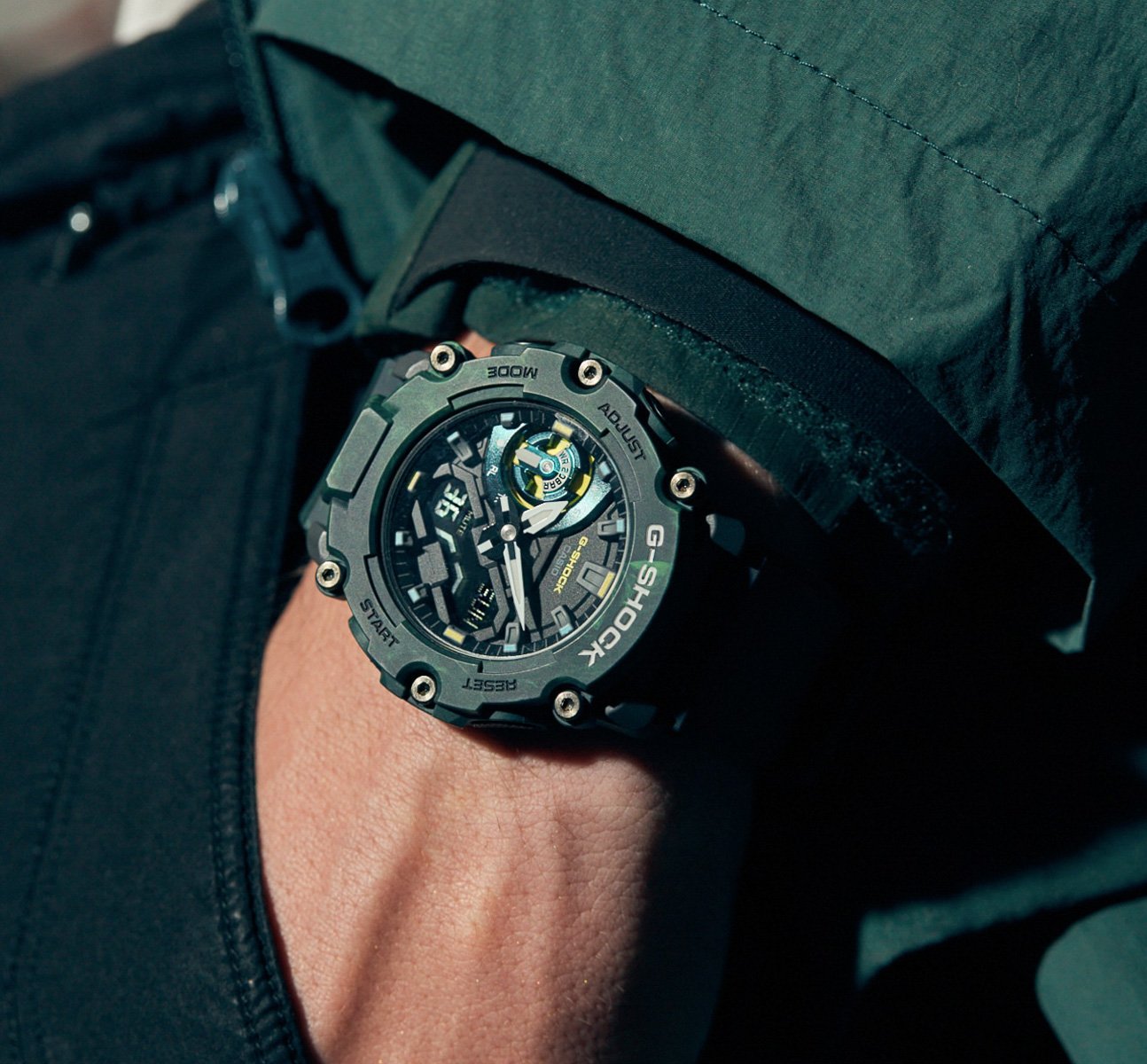 Overall, I love seeing these four releases. They are a nice little break from some of the louder and bolder models in the G-Shock collection that I have seen lately at Fratello. I loved the huge Mudmaster Landcruiser that Nacho wrote about not too long ago, and I adore what G-Shock did with the GMW-B5000PB-6 Twilight Tokyo. But I would probably buy the brown GA-2200MFR-5A as it is more my style. I like the fact that these four models have now been released globally because they will certainly appeal to a wide audience. Let us know your favorite of the four in the comments section.

If you would like to know more about these G-Shock models, visit the official G-Shock website for more information.