Is this the young, fresh, and relatively affordable alternative to another watch from Saxony?
Lex Stolk
comments 7
Share

It is very to look at the Glashütte Original PanoReserve and not think of the Lange 1, a watch made in the same village. It’s the elephant in the room, and I want it out of here as soon as possible. The Lange 1 debuted in 1994 and its most striking feature, the large date, was shaped after the digital clock in the Semper Oper in Dresden. The PanoReserve also has a large date that is called “Panoramadatum”. The watches also share an asymmetric dial layout with two separate dials for the time and running seconds plus a power reserve indicator. Luckily there are also a lot of differences between the “GO” and “Lange” watches so let’s focus on that from now on.

One of the most important differences between the Lange 1 and the Panoreserve is the price. A big part of the reason is the use of steel. A Lange 1 is always made in precious metal, but a Panoreserve also comes in steel. The blue-dialed version in its 40 × 11.7mm case in steel version we had at HQ has a price of €9.900. Just so you know, a white gold Lange 1 with a blue dial will set you back €36.900. Anyway, the Panoreserve also has a fresh new strap squeezed between the 20mm lugs; a color-coordinated blue synthetic strap. And by adding that strap option, the steel PanoReserve becomes a trendy classic within the reach of those who dig asymmetry. 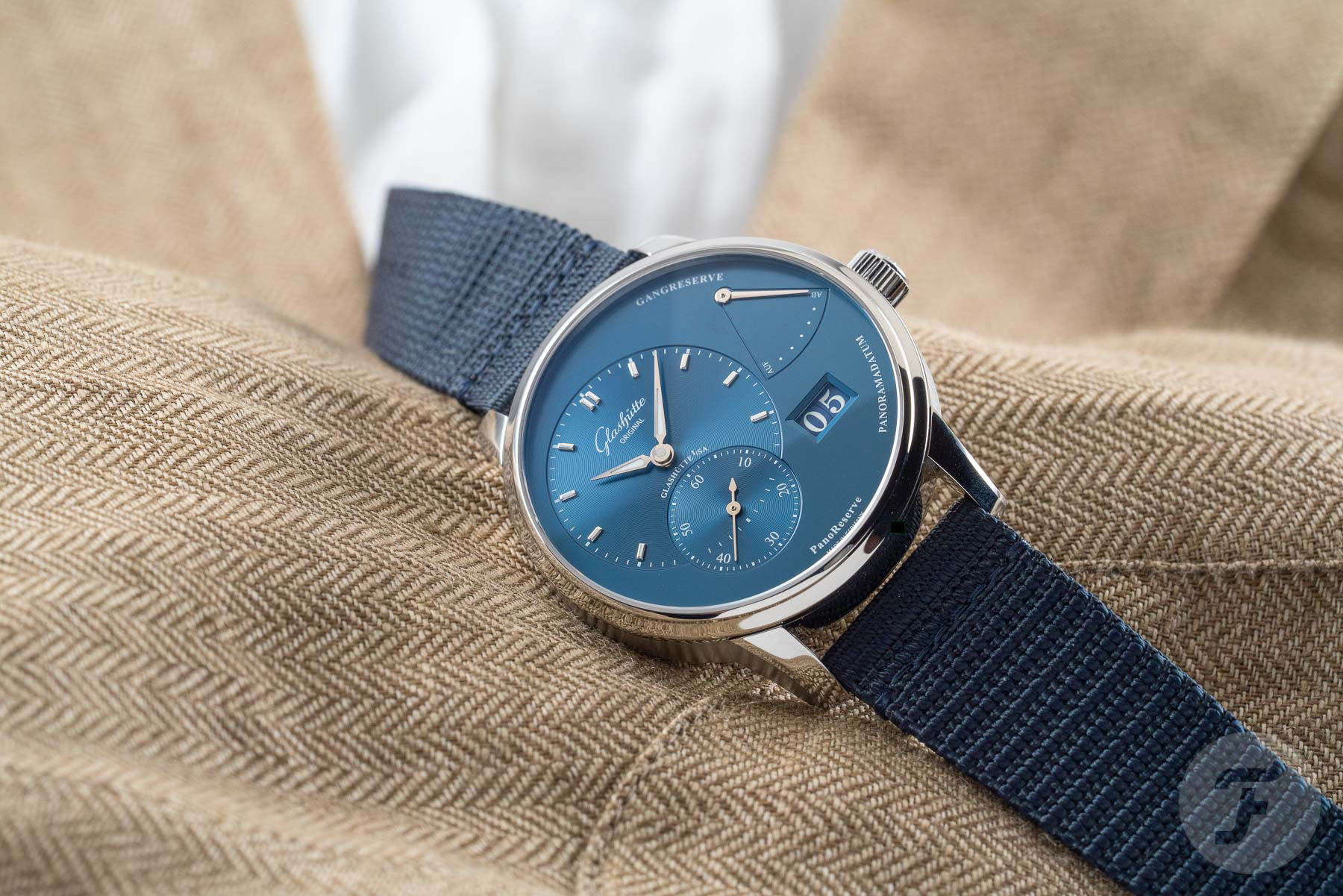 If you don’t like the asymmetric style of the Pano collection, don’t worry. There are plenty retro-styled Senator models that lean on the Sixties and Seventies. But for those who like it extra German, there are many watches from the Pano collection. Since 2001 the Pano is a mainstay of the GO collection that lives by apparent simple rules. Every Pano has a time-only off-center dial with an overlapping sub-dial for the seconds. The space that becomes available on the right side of the dial is used for complications. There’s always a Panoramadatum or big date, and it’s accompanied by a chronograph indicator, or a classic moon phase, and/or a retrograde power reserve hand. 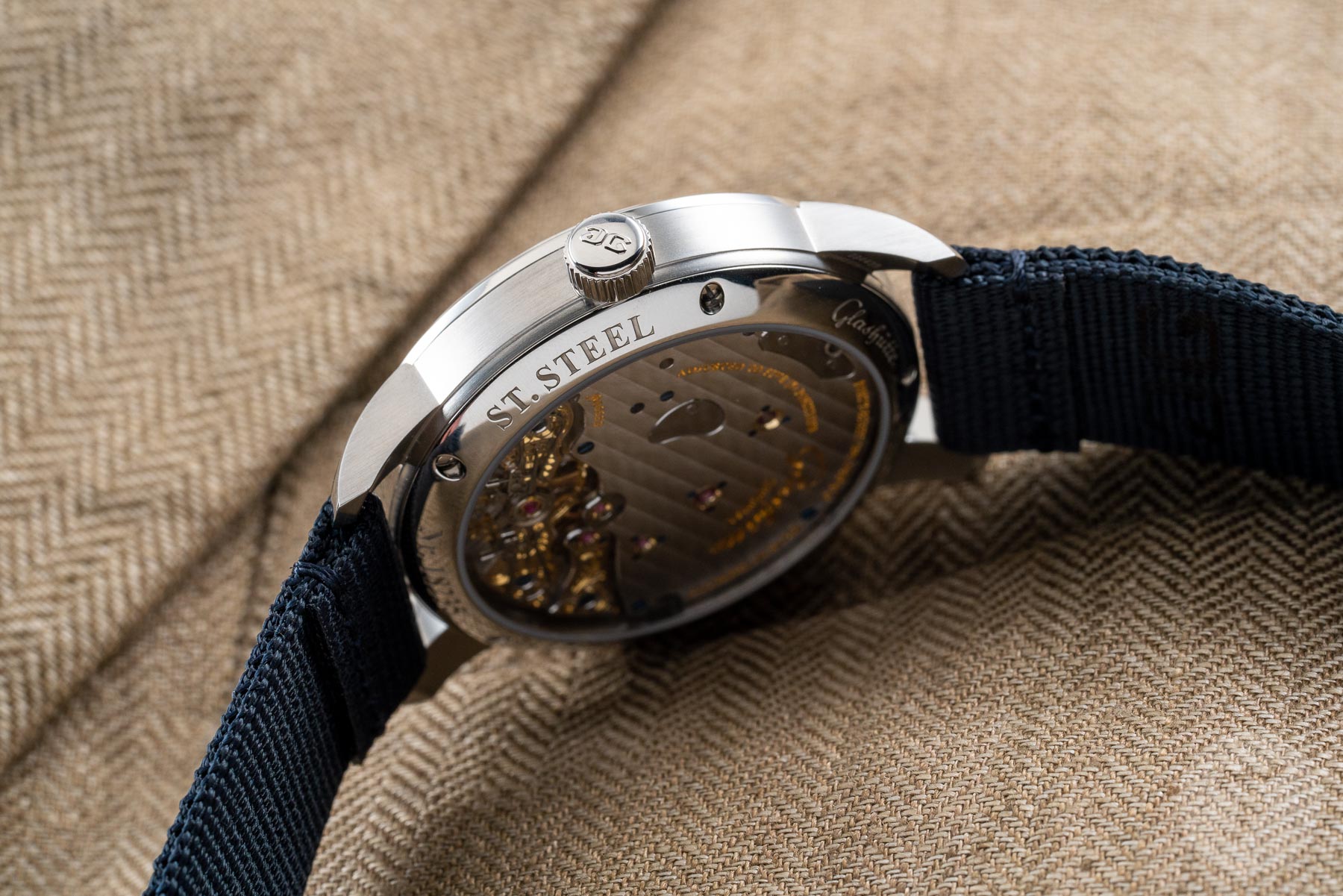 The Glashütte Original PanoReserve (1-65-01-26-12-34) is a relatively simple member of the Pano family. But the aesthetics are anything but. It’s all about the careful positioning and the proportion of the different elements on the dial. And the color, of course!

The watch’s appearance is a classic by now; traditionally Teutonic, if you will.

The galvanized blue has a subtly matted surface on which the scales are printed. It also shows applied indices and the characteristic Panorama Date shows white numbers on a blue background. The watch’s appearance is a classic by now; traditionally Teutonic, if you will. The addition of a fabric strap freshens things up significantly. It shaves years off the design, and it also looks like it would appeal to a younger and/or sportier crowd. 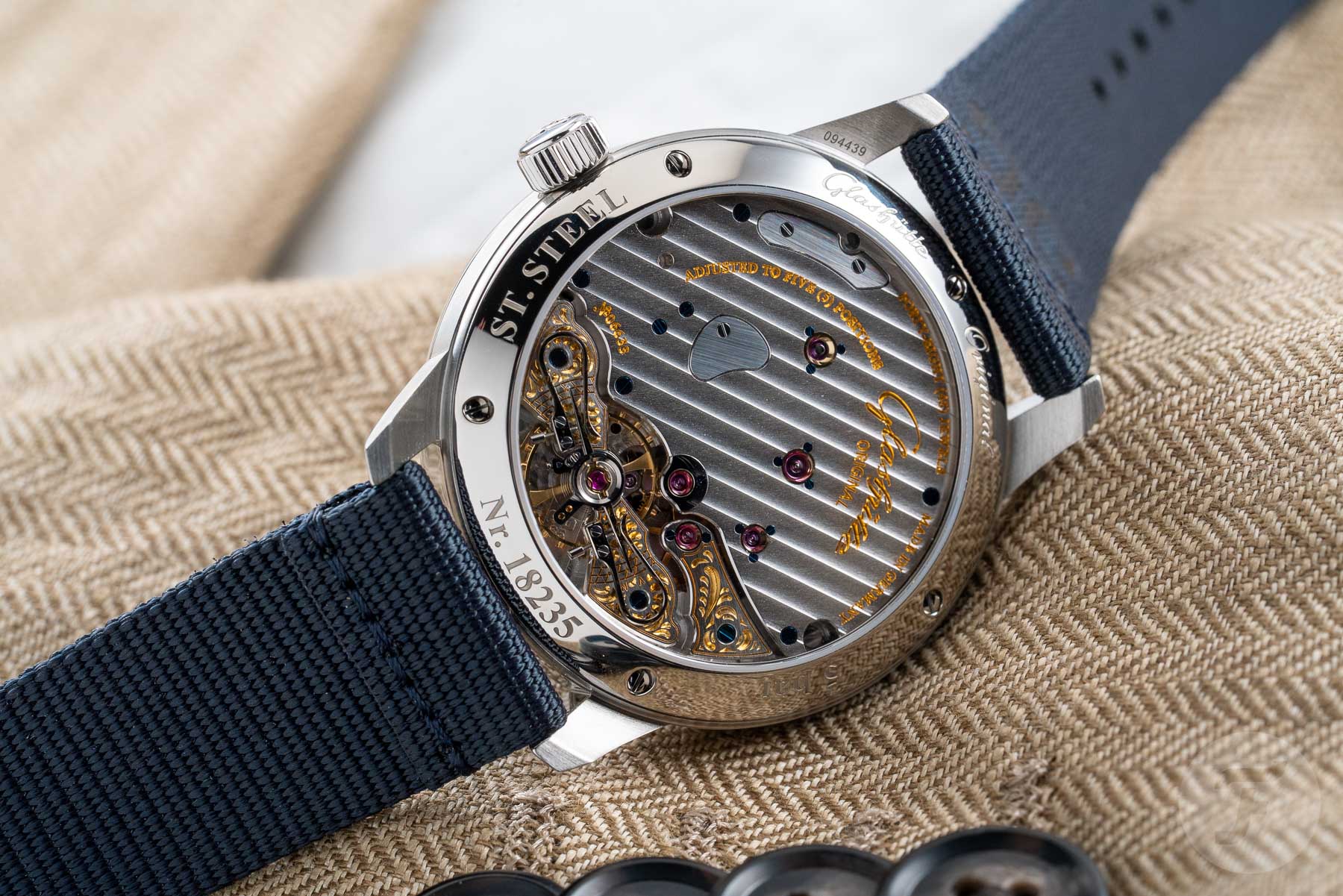 Flipping the PanoReserve on its back reveals another trump card; the manually wound in-house caliber 65-01. It’s a 4Hz movement with a power reserve of 42 hours — that’s a bit measly compared to other contemporary movements and something that could use an update. But there’s nothing wrong with the look of the movement. What you get is a Glashütte three-quarter plate with a striped finish — Glashütter Streifen — and beveled edges. And there is more. Blued screws, for instance, and when you look closely you can spot the balance bridge and second cock that are engraved by hand. More fine watchmaking is found in the shape of a duplex-swan-neck fine adjustment. 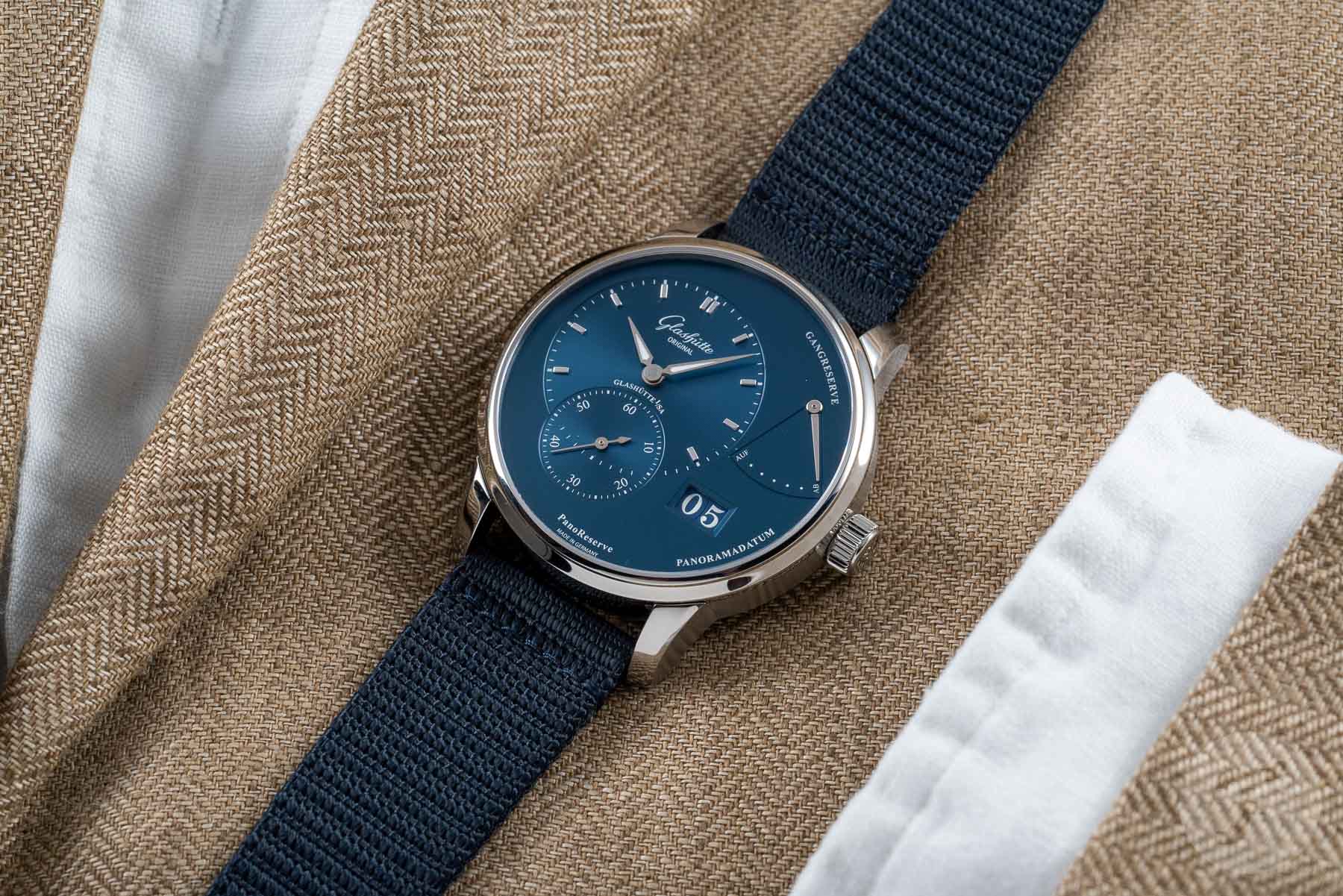 The Glashütte Original PanoReserve watch: who is it for?

You could look at the Panoreserve as a me-too product. After all, the Lange 1 preceded the Pano by seven years, and that’s why every Pano model will always be compared to the watch Walter Lange brought to life.

… if you have a budget that doesn’t quite reach the 37K point, you could well consider the Glashütte Original PanoReserve.

But here’s a whole range of watches out there that look alike — don’t get me started about dive watches or chronographs for instance — so if you are into the asymmetric aesthetics and movement characteristics that are so typically Glashütte, but if you have a budget that doesn’t quite reach the €37K point but ends around the €10K mark, you could well consider the Glashütte Original PanoReserve. And for the ones out there that already own a Lange 1, why don’t you try a fashionable fabric strap to rejuvenate your watch? I promise we won’t tell anyone that you saw it on a Glashütte Original first. 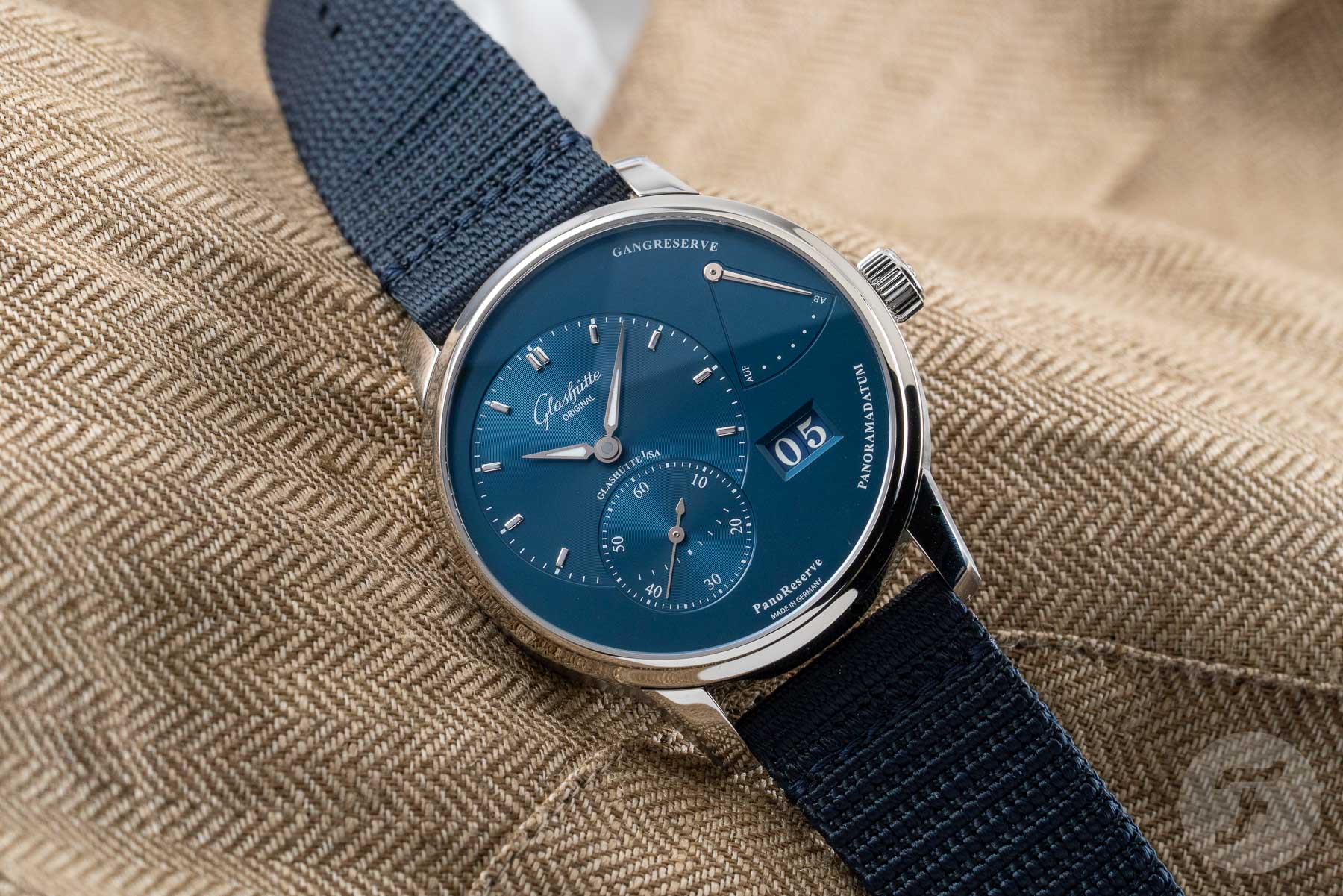 For more information about the Glashütte Original PanoReserve Watch please go to the company’s official website.