On the fifth day of Watches And Wonders, I managed to escape the magnetic pull of Palexpo for a couple of hours. That’s something that certainly seemed easier on paper than it was in practice, but which turned out to be well worth the shuttle ride back into town. Taking the elevator up to the second floor of the Beau Rivage hotel, I was greeted by some of the members of the Doxa PR team. After a quick greeting, we sat down around a tray with all of the recently released Whitepearl models. Yes, the SUB 300, the SUB 300T, the SUB 600T, and the SUB 1500T were all there. But without missing a beat, I went for the one that truly stood out. A great white shark amongst barracuda — the Doxa SUB 300 Carbon Whitepearl. This was my first time seeing, holding, and wearing a carbon Doxa, and it did not disappoint me one bit!

Oh, and don’t worry. Thankfully, these Whitepearl dials are just a beautiful flat white canvas, and they’re not opalescent or shimmery at all. But if you read Dave’s article on the release of Doxa’s new Whitepearl models, you probably knew that already. I’m here to share with you my thoughts on this new colorway for the SUB 300 Carbon. But why this model specifically? Well, whereas the other four watches feature more “basic” white dials, in the SUB 300 Carbon, the dial is actually fully lumed. A generous, yet even and perfectly white layer of Super-LumiNova is applied to the entire dial, making it the brightest of the bunch by far! 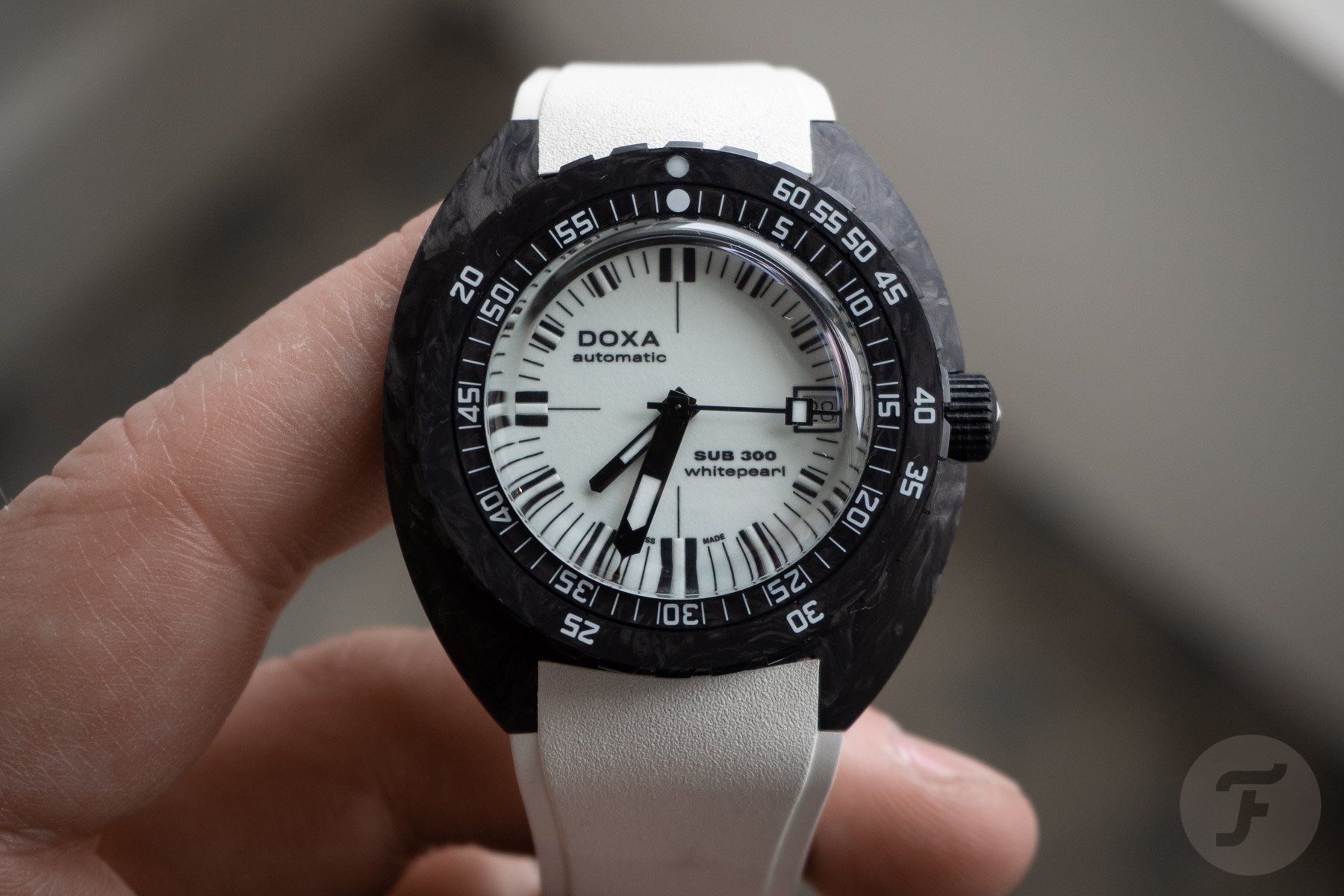 Most of us will have plenty of experience with mechanical stainless-steel-cased dive watches. Some of us might even have some hands-on experience with their titanium counterparts. The only thing that changes is the material. But the difference is more than significant. It can even be polarizing. There are people out there who swear by the lightness and comfort of titanium. Others find those watches lack heft and presence on the wrist. Carbon is a little bit like titanium. It’s extremely light and makes the watch rather comfortable to wear. However, I feel that whereas titanium doesn’t get a pass because it’s a metal — its metallic appearance implying a certain mass that isn’t there — carbon does. The fact that it doesn’t look like metal makes it easier to accept its lightness. Of course, it also has the added benefit of looking extremely cool!

In the hand, the Doxa SUB 300 Carbon Whitepearl feels like a tactical featherweight. Picking up the SUB 600 in steel afterward was jarring. It felt like picking up a watch made of precious metal. On the wrist, the 42.5mm watch is insanely comfortable, but thanks to the titanium core, sapphire crystal, and chunky rubber strap, it’s not without presence. It still won’t be for the purists, but it’s certainly not trying to be, and for that I applaud it. And whereas my previous favorite carbon Doxa was the original SUB 300 Carbon with the Aqualung logo, this new model definitely takes that top spot. I would tone down the white with the black rubber strap option. That said, the only thing cooler than a carbon Doxa is a carbon Doxa with a fully lumed dial! Luckily, these are not limited, and so for €3,890, one can be yours any time you’re ready. 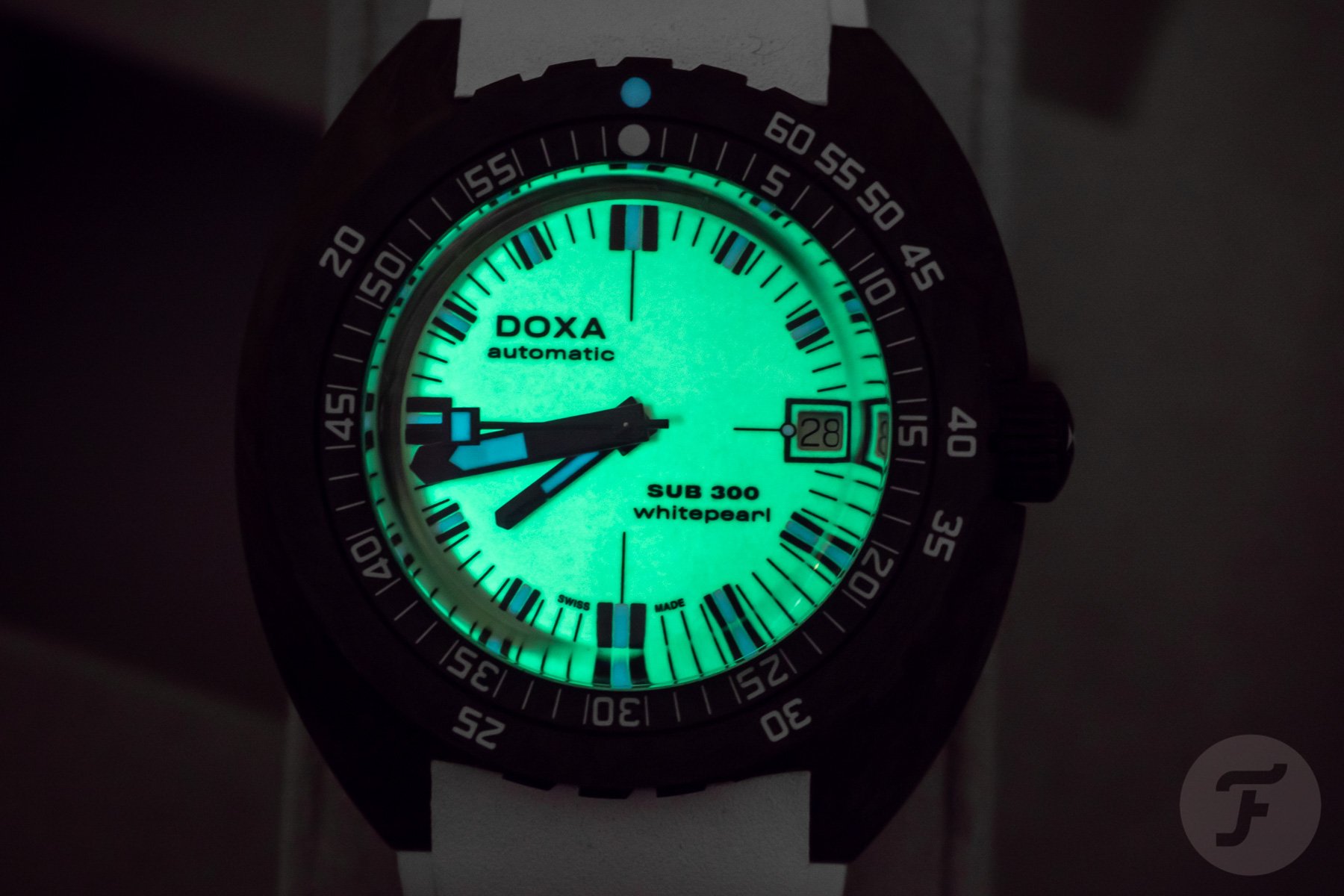 “So fresh and so clean, clean”

The carbon bezel is brilliantly grippy. It’s fully equipped with the signature Doxa scales engraved into it, which have been filled with matching white paint. In keeping with the cleaner-than-clean look of these Whitepearl models, there is no hint of orange or yellow anywhere on the watch. A trio of black hands floats over the icy white dial, and a white Doxa logo decorates the crown. A simple case back also bearing the Doxa logo is the only visible bit of titanium on the case, but it’s PVD-coated black. The only time you’ll see color on this watch is when you head for the dark. There, the dial comes alive in green and blue tones, glowing brightly for hours on one charge.

Don’t be fooled, though. The reason why the Carbon model is the one to go for isn’t just its looks. It’s also the fact that it’s the only one of these new white Doxa models with a fully lumed dial. It is the ultimate badass featherweight deep-sea monster. For more info, check out the Doxa website.

As always, let me know your thoughts on this one below. And as much as I’ll promise that I respect differing opinions, I’m drawing a line. If you don’t think this watch is cool, I politely yet firmly disagree.