Hands-On With The Dumoreau DM02 — A Dangerously Round Dress Watch

A "pink miracle" for under $1,000
Tomas Rosputinsky
comments 9
Share

The second watch from California-based microbrand Dumoreau is extremely well-considered, rich, and original in detail. However technical the name of the Dumoreau DM02 may sound, the lively and organic design of the piece has a lot to offer for the budget.

“What is that pink watch on your wrist?” asked my associate Ivan when he stormed into our office. He usually doesn’t pay much attention to watches, but it seemed this one got his attention in a second. Our table arrangement has us facing each other. Well, we would face each other if our heads weren’t swollen by the oversized monitors in front of us. We usually just talk and don’t see each other. I was fully focused on whatever I was typing until I realized that Ivan had leaned his head down on his table so he could still spy on my watch from under our monitors. I understood. He needed to know the identity of the pink watch on my wrist. 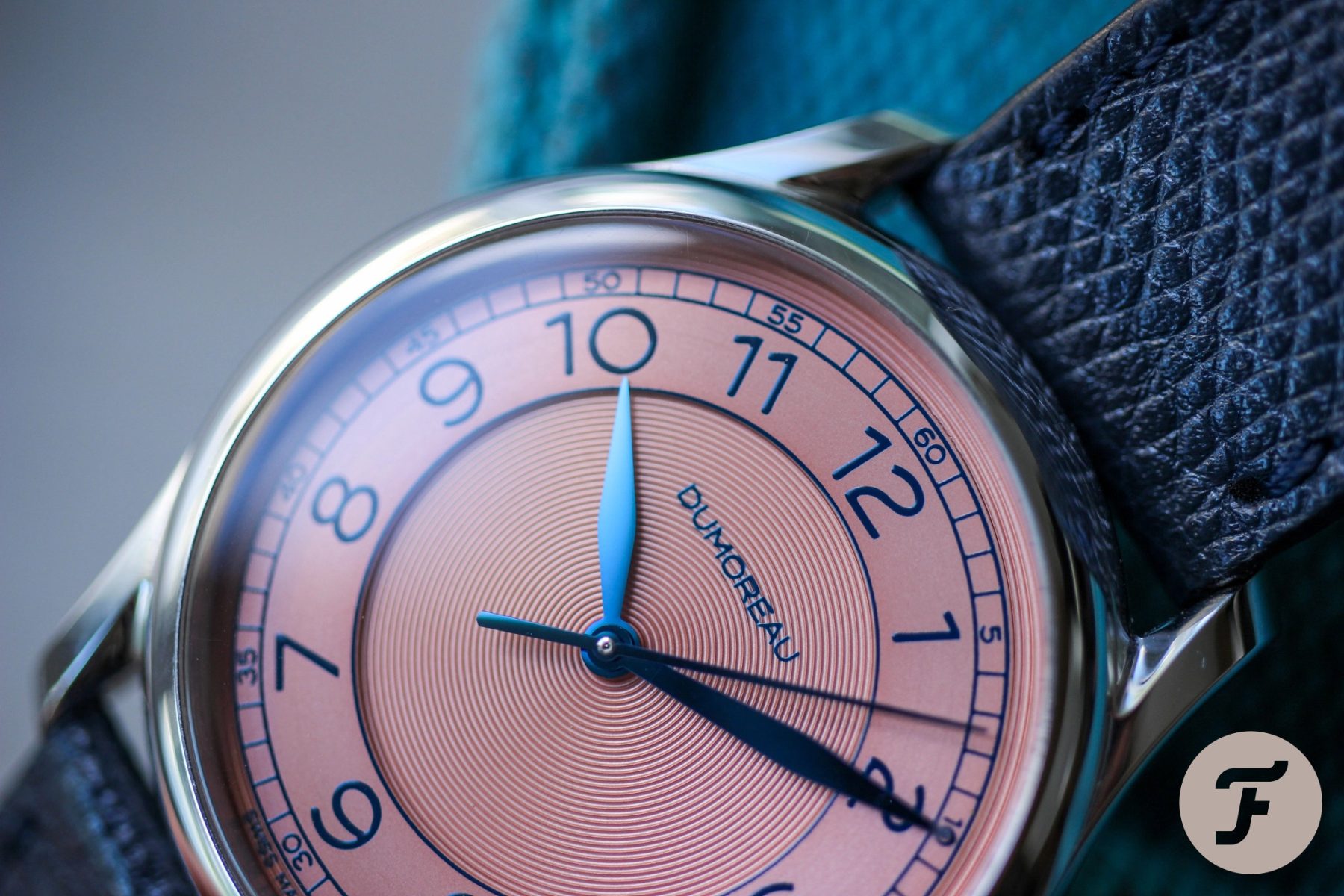 It all happened so unexpectedly and spontaneously that I believe Ivan was not joking. He showed genuine interest. That is really something, considering the fact that I rotate hundreds of watches. Usually, he could hardly care less, but the Dumoreau DM02 got him shockingly fast. I am neither an expert on fish nor colors. And Ivan doesn’t care about proper watch terminology. He just likes nice stuff. He likes the new Dumoreau DM02. And whatever we call it, it is a bit pinkish in only the most positive ways.

How did the Dumoreau DM02 find its way to my wrist?

An Italian friend of mine asked me a few months ago if I knew of Dumoreau watches and whether I’d take a look at the latest offering, the Dumoreau 02. I had never heard of Dumoreau, and I had no knowledge of the brand’s past releases. But there was something magnetic in the shape of those super-long hands, so I asked the brand’s founder for a press sample of the Dumoreau 02. He didn’t send me the black model that originally wanted, and what a great decision that was. 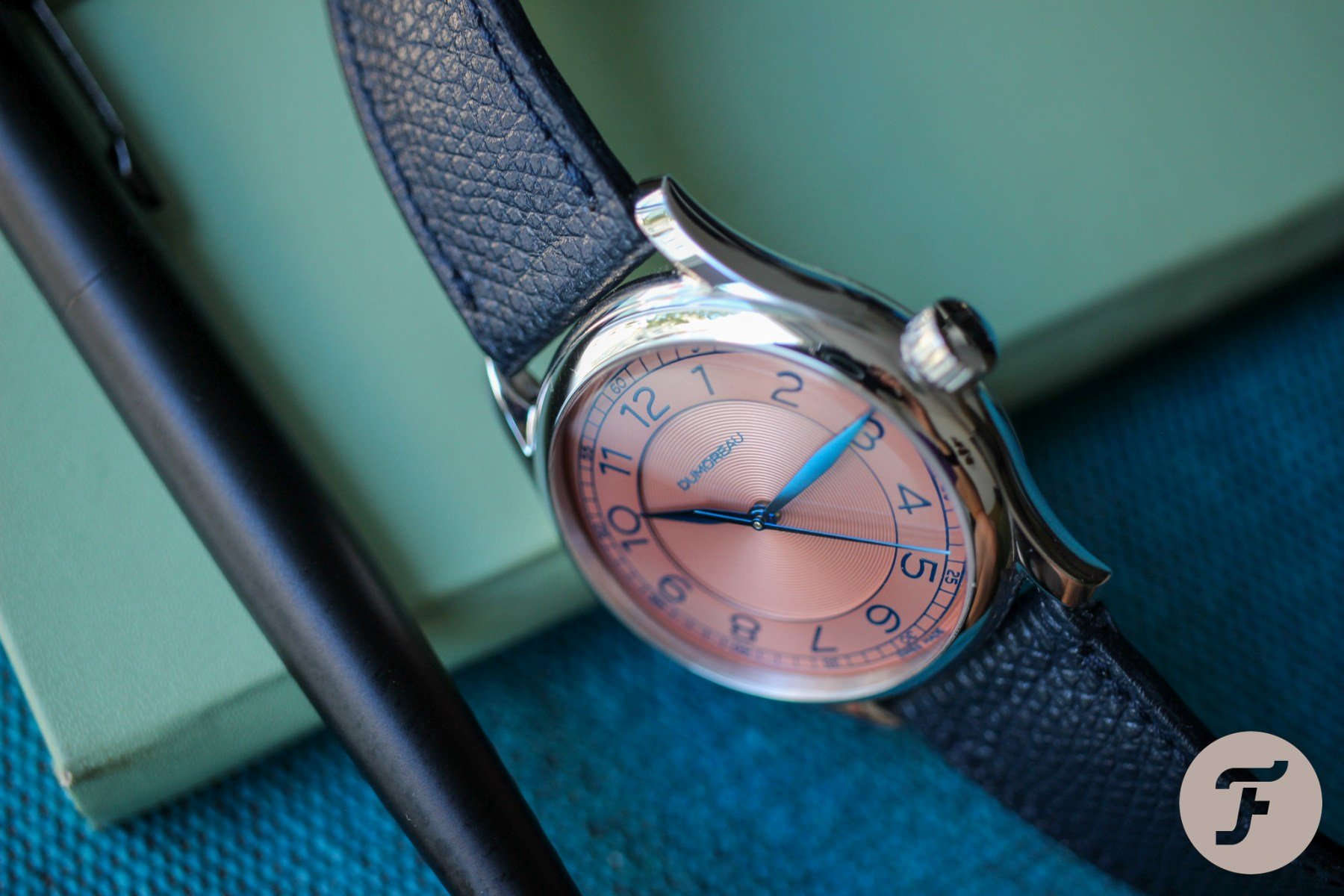 I checked all three variants online. Immediately, I dismissed the white/silver one. I also worried that the salmon would look too cheesy and opulent, so I wanted to see the black model. Well, I don’t want that anymore. From the moment I unboxed the salmon DM02, both the design and the color have only dug deeper into my heart.

A brief look sends a pretty clear message to your brain: here is a vintage-inspired, wannabe-elegant, but a bit generic time-only watch. At first, I could not put my finger on what specifically attracted me to DM02 on a subconscious level. I needed a few days to understand its lines and curves and realize how well each element is thought through and interacts with the others. 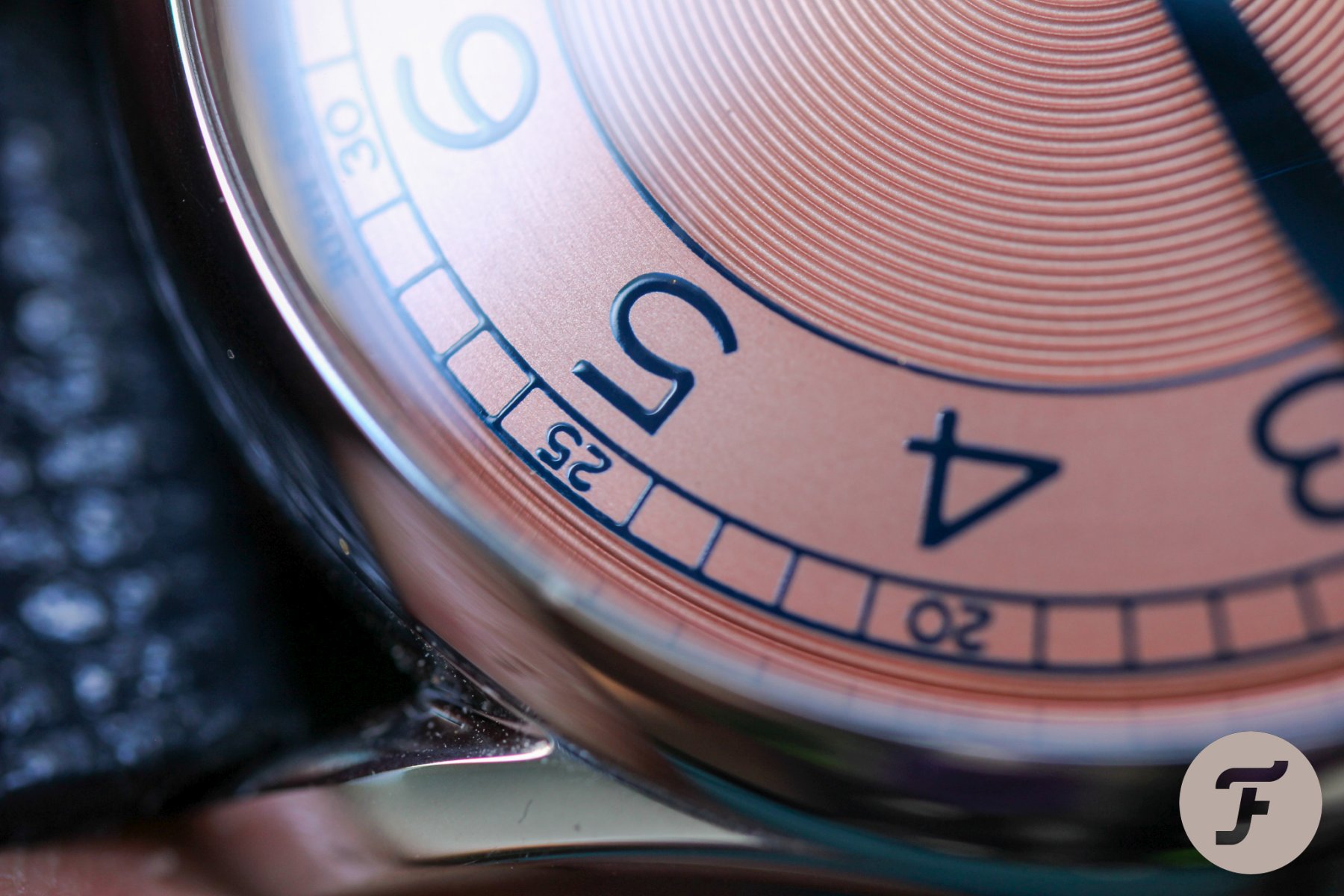 Circles and round curves

There is a concentric focus on the handset. Every drop of blue ink except for the logo sits on one of the visible or imaginary circles that draw the wearer’s eyes in one direction. It’s like an eye-riveting incident has happened there. Designer Carlo Aiello has made it so that I can’t possibly tear my eyes away from the hands. The big Arabic numerals surrounded by two thin rings don’t let me escape. Time is the only thing I can see. “Time-only watch” was never a more precise description than it is today.

But despite the way the dial draws my eyes to the time, there isn’t one specific design element that shines brighter than the rest. Rather, each detail complements the others. The dial is constructed from two parts connected by pins like a jigsaw puzzle. The central portion is slightly sunken, and it has fine, concentric circles that remind me of a freshly plowed field. Aiello says it was inspired by the Japanese zen gardens, which would explain why it leaves such a clean and peaceful impression. 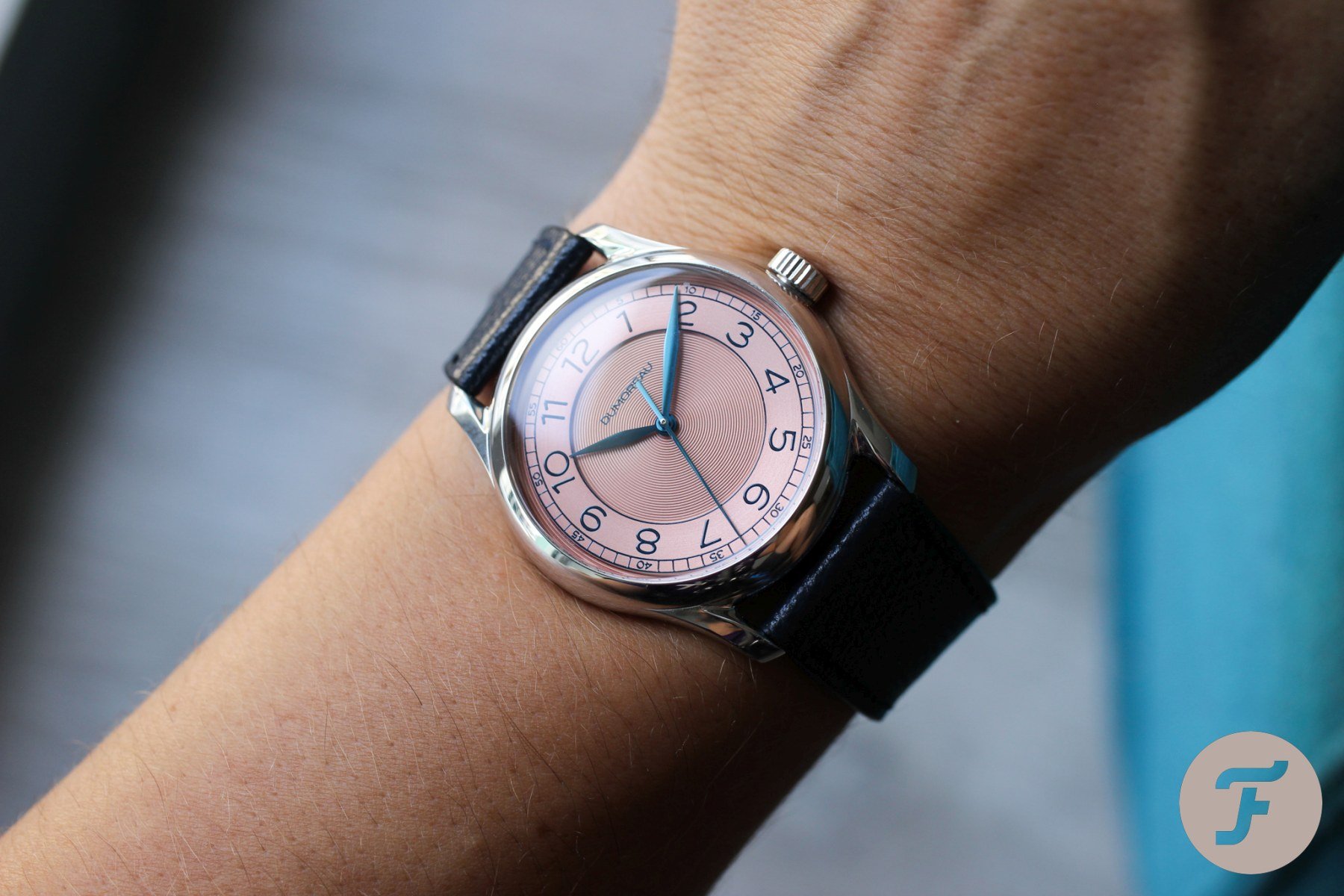 I spent some time looking at the hands. They aren’t daring or opulent in any way, yet they evoke quiet respect. Look at them. They are remarkably long, but they have no special decoration and seem almost flat. “After many attempts, I designed leaf hands that would follow the curvature of the case, and that would be very easy to read and to differentiate between hours and minutes. It is crucial to have excellent readability,” explains Aiello. Heating gave them a high-born blue color that fits nicely with printed scales on this pink salmon dial. The hands look traditional but original at the same time.

It doesn’t attract eyes in an ostentatious way. Rather, it triggers curiosity.

Do you remember my worries about the salmon Dumoreau CM02 being too shiny and cheesy? Those worries turned out to be a silly waste of time. This color is subtle rather than overly saturated. The salmon-dialed DM02 shouts loudly, no doubt about that, but the story about my colleague’s reaction sums it up. It doesn’t attract eyes in an ostentatious way. Rather, it triggers curiosity. The dial is simple but not opulent. It’s down to earth and even quite modern and sporty. I love that Aiello didn’t use a curly or serif font. Doing so would have made an otherwise light and fresh watch unnecessarily heavy for me. So heavy that I couldn’t digest it. 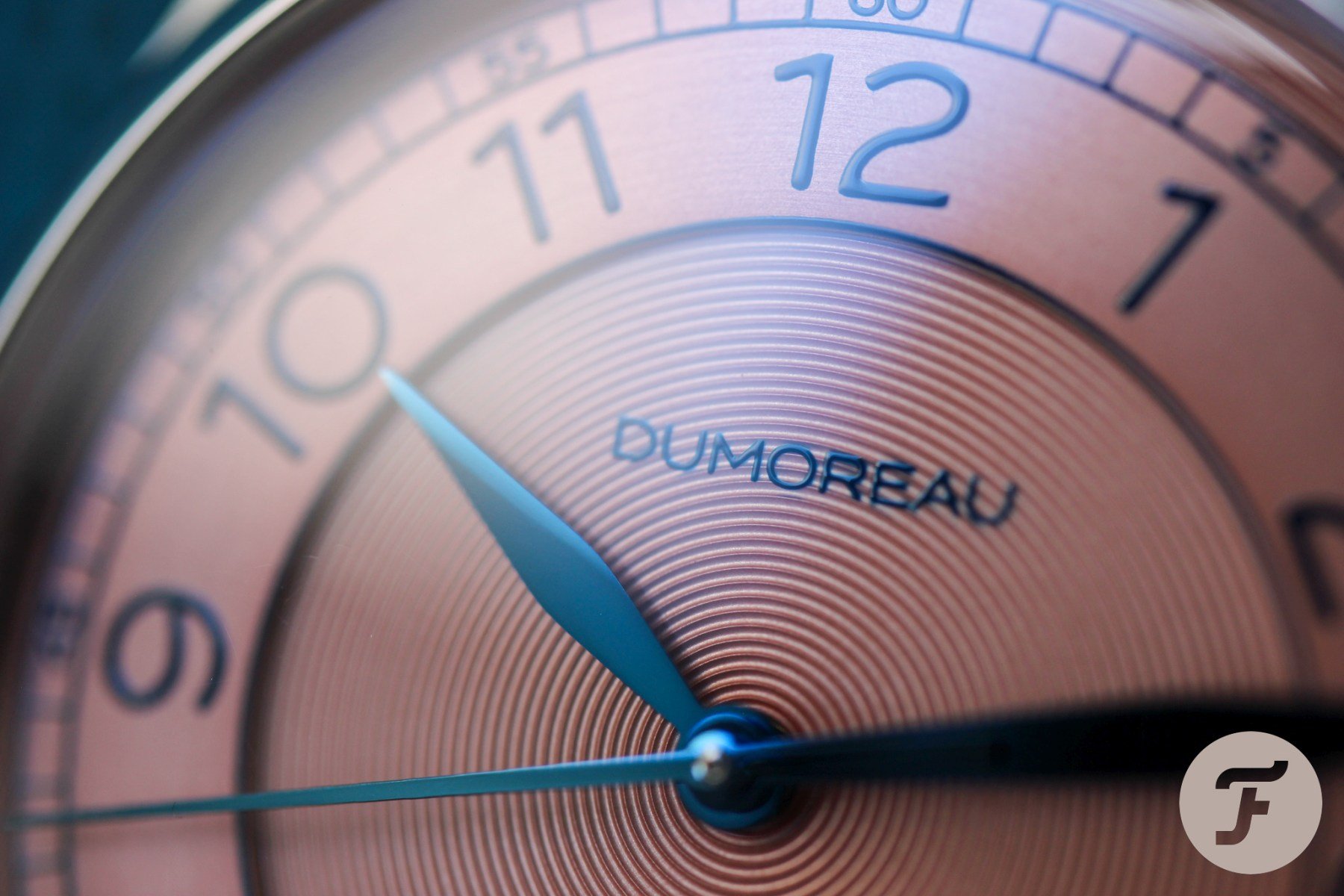 Aiello designed the font that he used for the Dumoreau logo. The fine printing over concentric circles had me digging out my magnifying glass. It’s a delicate detail that you won’t find on a sub-$1,000 watch every day. Aiello is determined not to take any shortcuts. “This was a crucial aspect of the design because we didn’t want to interrupt the circular pattern with the logo. Many designs create a flat surface to stamp the design, but we could print the logo on top of the lacquered layer above the texture. We tested many options and found the correct way to create a crisp printing on top of the design. We used traditional hand-applied printing pads.” 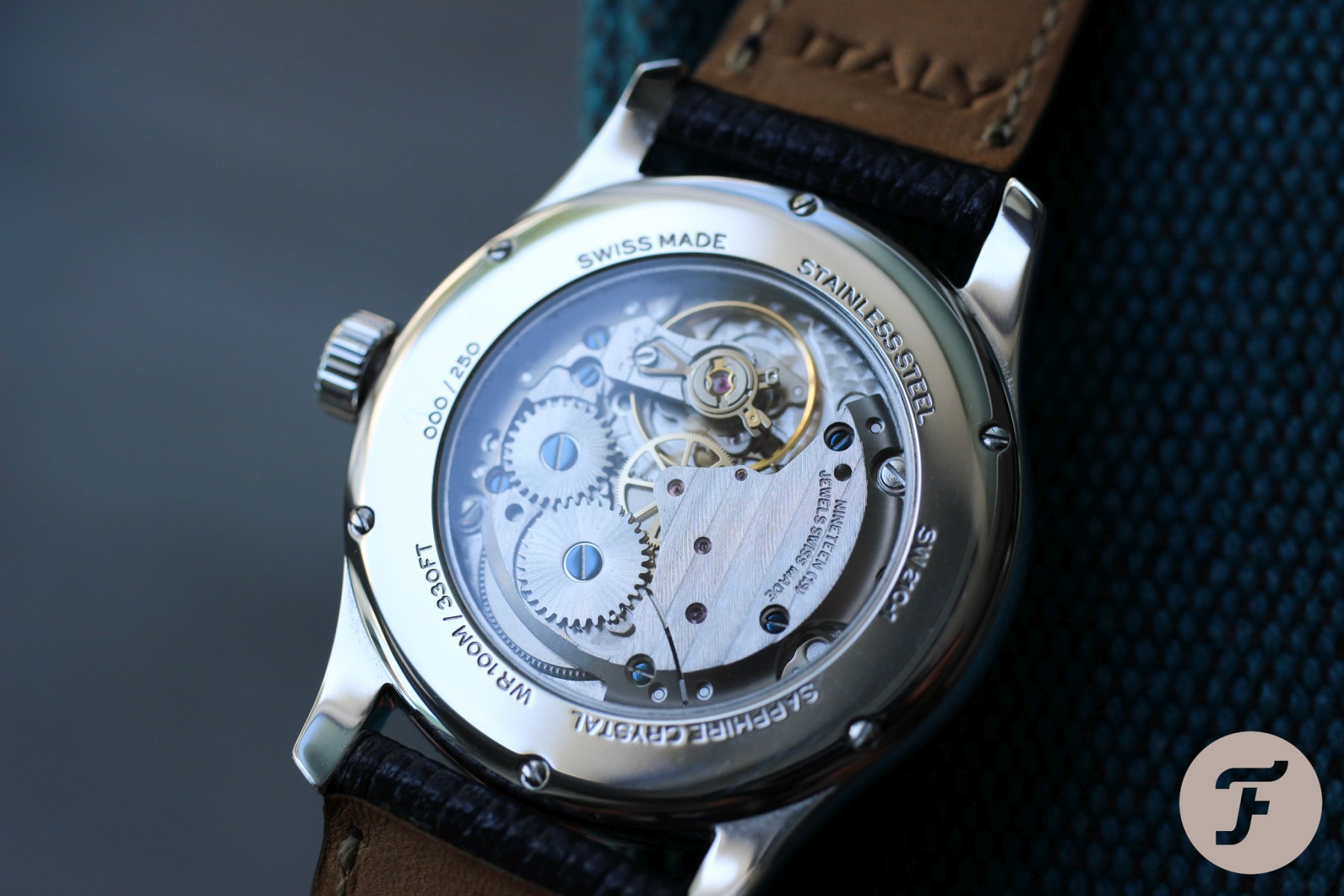 Another important detail to highlight is that the concentric design goes beyond the dial. When looking at the watch from the top, the case seems like a perfect circle. I can’t shake the feeling that I’m seeing the frames of the fully round glasses I like so much. The side of the case is equally round. You almost fail to notice its edge because it flows organically into the dial. 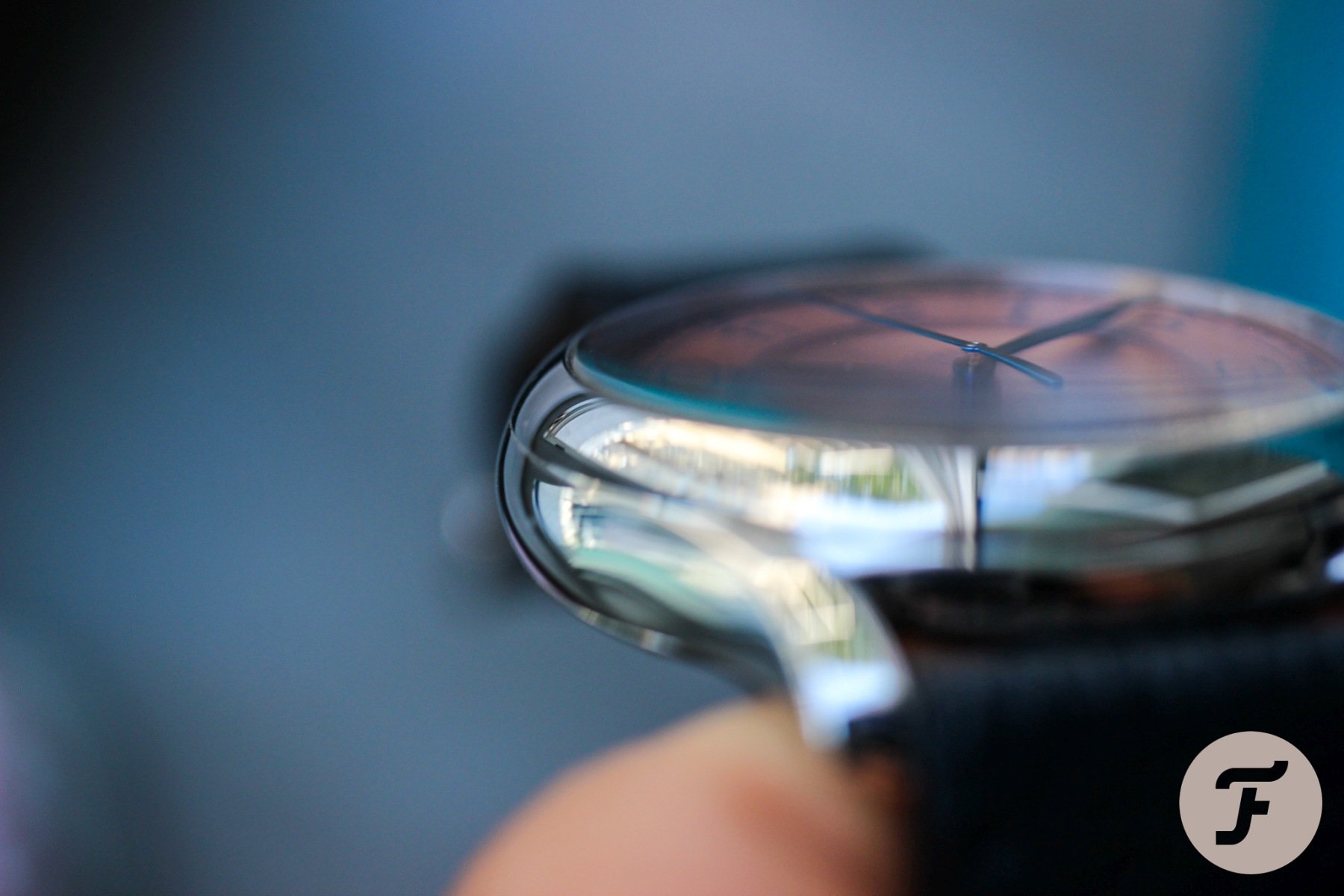 The DM02 measures 39mm in diameter and 9.5mm thick. With a lug-to-lug of 46mm, it is a fantastic size for a modern dress watch. It was designed in California, where Aiello lives, and the Swiss company Roventa Henex was entrusted to manufacture it. The exhibition case back, which is held in place by six screws, gives a view of the hand-wound Sellita SW210-1 movement. I enjoy winding watches by hand, so I like that Aiello kept it manual. And speaking of winding, the crown is another surprise, as I would expect a slightly thinner design here. However, after a few weeks of on-and-off wear, I don’t mind it at all.

Interestingly, I just felt that a signature would help the crown a bit, so I asked Aiello why he didn’t add one. “After careful consideration, I thought that a logo or mark on the crown would distract from the design. The crown is also custom made and follows the organic curves of the case.” 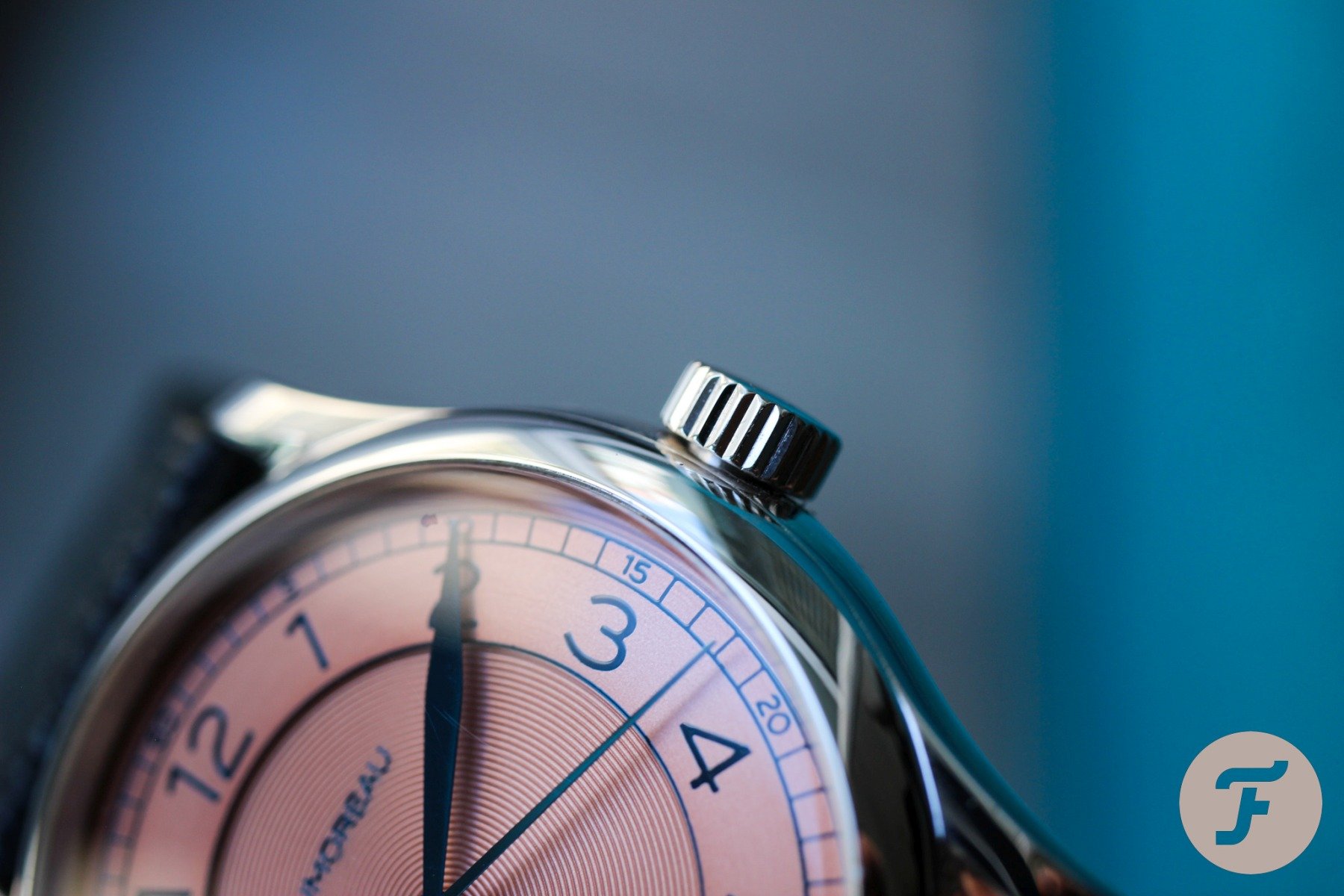 The engineering of the crown with a triple-gasket construction offers 100m of water resistance. To my amusement, the Dumoreau DM02 came fitted with a calf-textured blue strap from my favorite Torre Straps. My prototype is fitted with a Plexiglass crystal, but the production pieces will feature antireflective-coated sapphire crystals placed close to the dial to minimize reflections. The idea is to reduce the rehaut and the total width of the watch to a bare minimum. I hope that sapphire won’t change the natural view that Plexi provides.

This might offend a certain someone, but I only became interested in Dumoreau’s founder after I fell for the watch. After a few days, I was sure I wasn’t looking at some smashed-together concept where the case, hands, or dial style made no sense whatsoever. On the contrary, it had to have come from the mind of someone who understands the art of proportions. And I was not disappointed.

Forty-four-year-old Carlo Aiello is an architect and acclaimed product designer. He worked on a proposal for a new Guggenheim Museum by Asymptote Architecture and several skyscrapers by Skidmore, Owings, and Merrill. Aiello also received the prestigious Red Dot Award and the Good Design Award. His Parabola Chair was included in the permanent collections of the Chicago Atheneum Museum of Architecture and Design and the San Francisco Museum of Craft and Design. 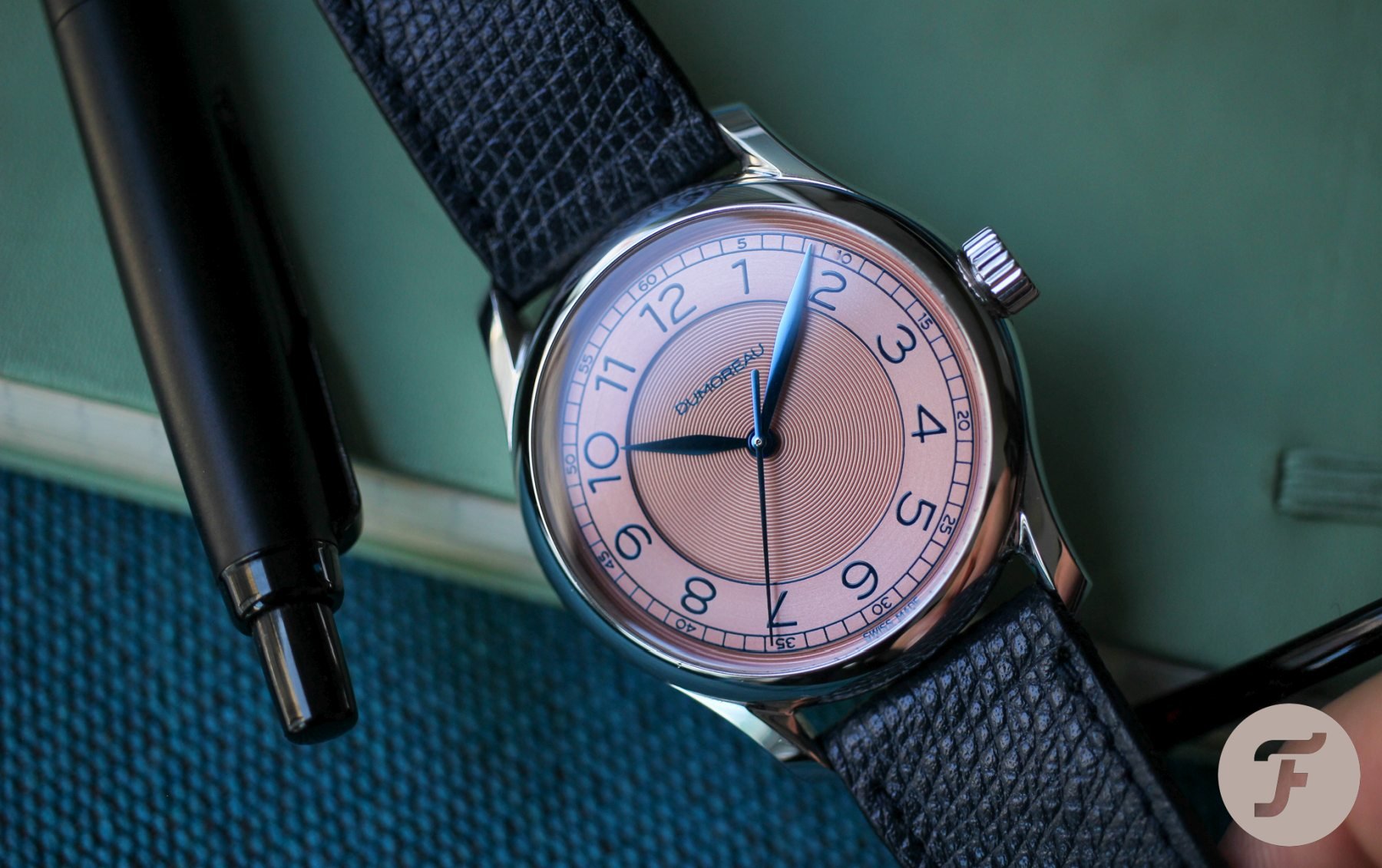 Final thoughts on the Dumoreau DM02

It took Aiello one year to finalize this design and get a prototype that he was happy with. While his first watch was limited to 500 pieces, the DM02 will see a run of 300 in total across three dial colors. Aiello’s ultimate goal is to create his own movements. Looking at his watch now, I believe he can do it.

I spent one month with the DM02, and I can tell you it has character, spirit, and a solid idea behind it. Choosing a time-only watch to enter the watch world is probably the hardest way. Aiello, however, seems he isn’t afraid of that. The Dumoreau DM02 not only surprised me but also completely won me over. I was not looking for a dress watch, and definitely not one in salmon. But a perfectly sized, shaped, and comfortable case carrying a stunningly fluent dial proved to me that I needed one. I was surprised by how versatile the “pink” dial can be when matching it to different outfits. After all the vintage chronographs, colorful divers, and quirky complications I’ve bought, it’s nice to rediscover a simple time-only watch.

The Dumoreau DM02 is available for preorder now at US$975. Deliveries are slated for December 2022. For more information and ordering, visit Dumoreau’s official website, and let us know what you think of this design in the comments.

Hot Topics
Introducing: The New Seamaster Professional 300M 60 Years Of Bond — With A Special Animated Case Back
100 comments
It’s Time To Invest In A Dress Watch — Our Picks From Breguet, Omega, Grand Seiko, And More
67 comments
Are You Still After An Omega × Swatch MoonSwatch?
65 comments
Sunday Morning Showdown: The Tudor Pelagos Provocation — Pelagos Vs. Pelagos 39
55 comments
The Rolex Waitlist Conundrum — How Much Will The Price Of Your Watch Increase While You Wait?
48 comments
Popular
Grand Seiko SBGA211 ‘Snowflake’ And Why I Didn’t Buy It
Robert-Jan Broer
22
You Asked Us: Tissot Powermatic 80 Seastar 1000 or Longines HydroConquest
Robert-Jan Broer
19
Speedmaster Speedy Tuesday 2 “Ultraman” – Out Now! (Live Pics and Video)
Robert-Jan Broer
32