The fact that Longines decided in 1984 to stop producing their own movements and use ETA instead, does not mean they don’t have interesting timepieces for ‘techies’. As long as CEO Walter von Känel is on board, this is not going to change (as he told us here), he is focusing on affordable main stream watches for a large audience. For the smaller group that we belong to, watch enthusiasts, they have their Heritage collection where they grab back to watches from their rich history (since 1832). Since Longines is part of the same group (Swatch) as ETA, they are able to get some exclusivity for their brand. So not in-house, but exclusive movements made for Longines.

An example of this is the Longines L788 movement that they developed together with ETA (being ETA’s caliber A08.L11) and used in their Longines Column-Wheel Single Push-Piece Chronograph as well as some other mono-pusher pieces in the Heritage collection.

This Longines Column-Wheel Single Push-Piece reference L2.776.4.21.3 isn’t new to the collection, but after seeing it a couple of times in the flesh I decided to request one for a review. So without further ado, let’s get started.

The introduction of the L788 movement was already in 2012 and in the meanwhile, Longines has used it in several of their Heritage collection watches.

This watch was introduced in a couple of variants (normal lugs, wire lugs, different dials, gold and steel) in 2012 with one limited edition, the rose gold version to commemorate the 180th anniversary of Longines in 2012. Limited to 180 pieces only, of course. Our friends from Hodinkee did a nice write-up on it here.

The Longines Column-Wheel Single Push-Piece Chronograph I have in front of me, is perhaps the most feminine looking one, but I guess that it wasn’t particularly developed as a woman’s watch (although women can certainly get away with it). The polished case and white lacquered dial make it look like a pocket watch with two soldered wire lugs attached to the case, which was probably how it was meant to look.

Let’s start with a bit of annoyance first. The date window. Come on, who came up with this? It ruins the Roman VI and “breaks” the otherwise beautiful clean dial way too much. Nobody needs a date anyway, as you once check it on your iPhone or computer screen and you don’t forget it for the rest of the day. There is no use for a date, but I think Longines also wants to keep the practical buyer’s on-board with a date window, like they did with the Longines Legend Diver Date. In this case though, I feel that keeping a date is even worse as the dial is a huge part of the attraction of this watch where the Legend Diver can be seen more or less as a ‘tool watch’ or divers watch.

The beautiful blued hands and stunning printing on the dial is just that in my opinion. Stunning. The classic looking slender hands have exactly the correct length, something that seems nothing more than logical but some brands still achieve to properly mess this up. The Roman XII is printed in bright red. Everything is to be observed via the sapphire crystal with several layers of AR coating.

On the right of the case, you will see only a crown. This is a mono-pusher piece, so there is only one small button to use to activate and stop the chronograph mechanism. It is actually, the main attraction of the Longines Column-Wheel Single Push-Piece Chronograph. 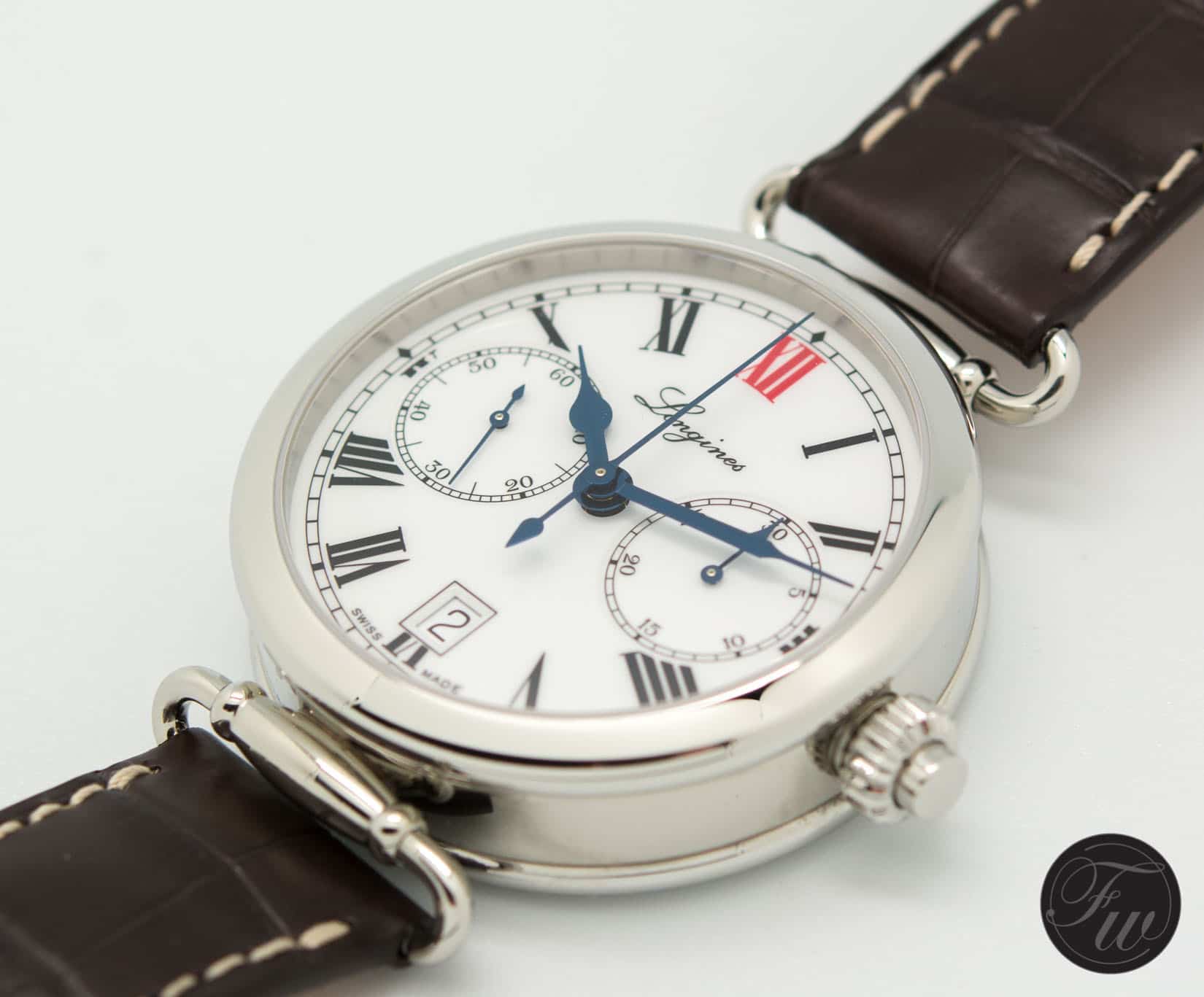 As you can see on the images above, this is a heavily vintage inspired watch. I couldn’t find ‘an original’ piece of this particular model, but I also have to say that I don’t have a very complete library on Longines. My assumption would be that there is a similar piece from the 1910’s or 1920’s with a similar appearance. Longines has a rich history when it comes to chronograph watches, the caliber 13ZN perhaps the most famous and sought-after one. Many collectors long for a Longines 13ZN and prices for watches with that movement are quite serious, but Longines has no plans to do a revival or rebuild of that movement. They rather ‘remember’ those days with pieces like this Longines  Column-Wheel Single Push-Piece Chronograph.

This watch has a stainless steel, polished, case and measures 40mm. So it is a not a huge watch, but probably bigger than their chronographs of decades ago. 40mm also makes it suitable for ladies to watch, although it is quite a thick watch as you can see.

A nice brown alligator strap has been attached to the wire lugs and you have to close it with a pin buckle. I am a fan of those to be honest and prefer it over a folding clasp. You might have a different opinion about comfort and safety of course.

Longines rated it water resistant to 3 bar (~30 meters) but I can’t imagine you want to have it near water in any case. It should be proof for an occasional splash of water, but don’t use it in the shower or in the swimming pool. Don’t do that anyway with a watch on an alligator strap. The fact that an alligator does well in water, does not mean your strap will. 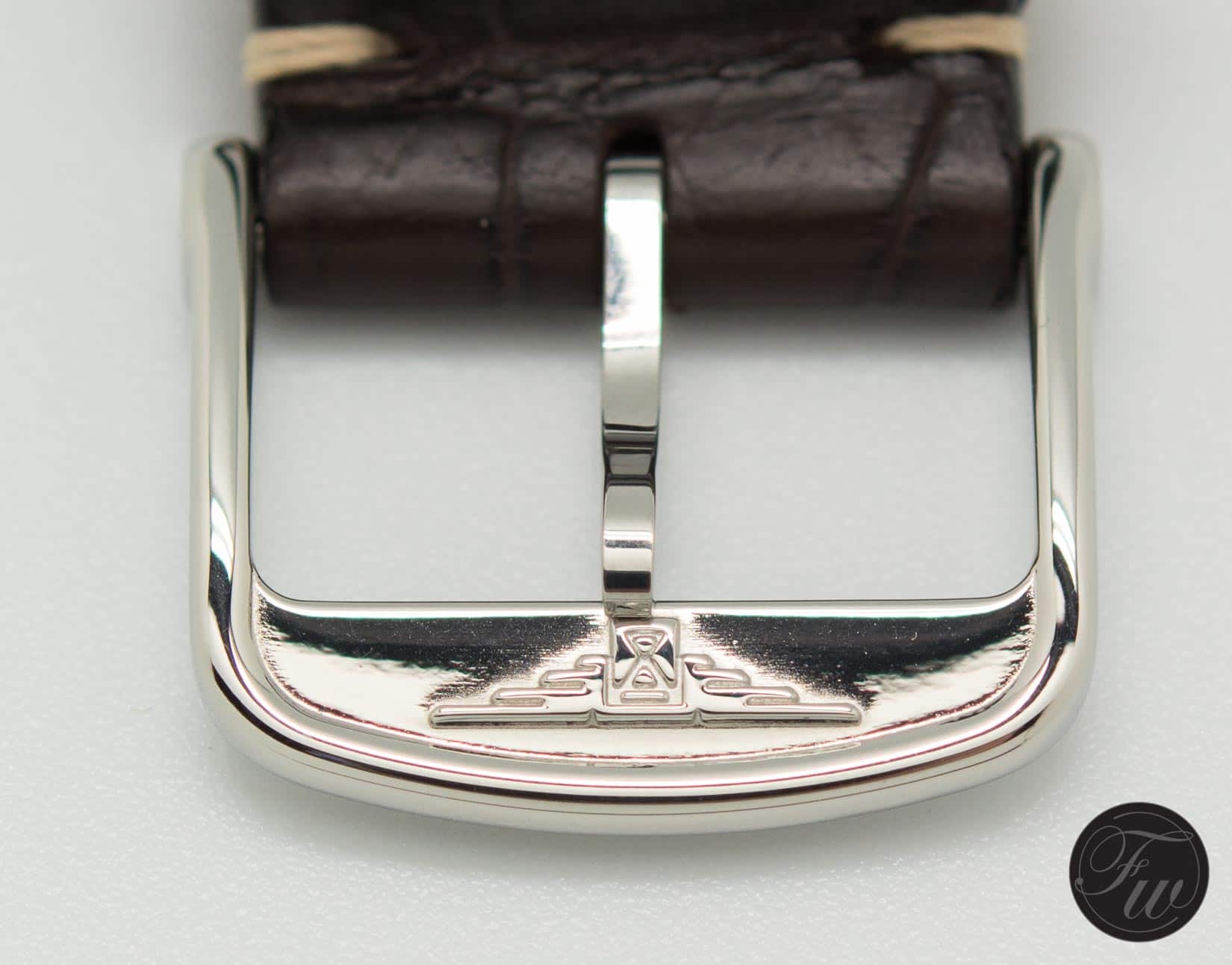 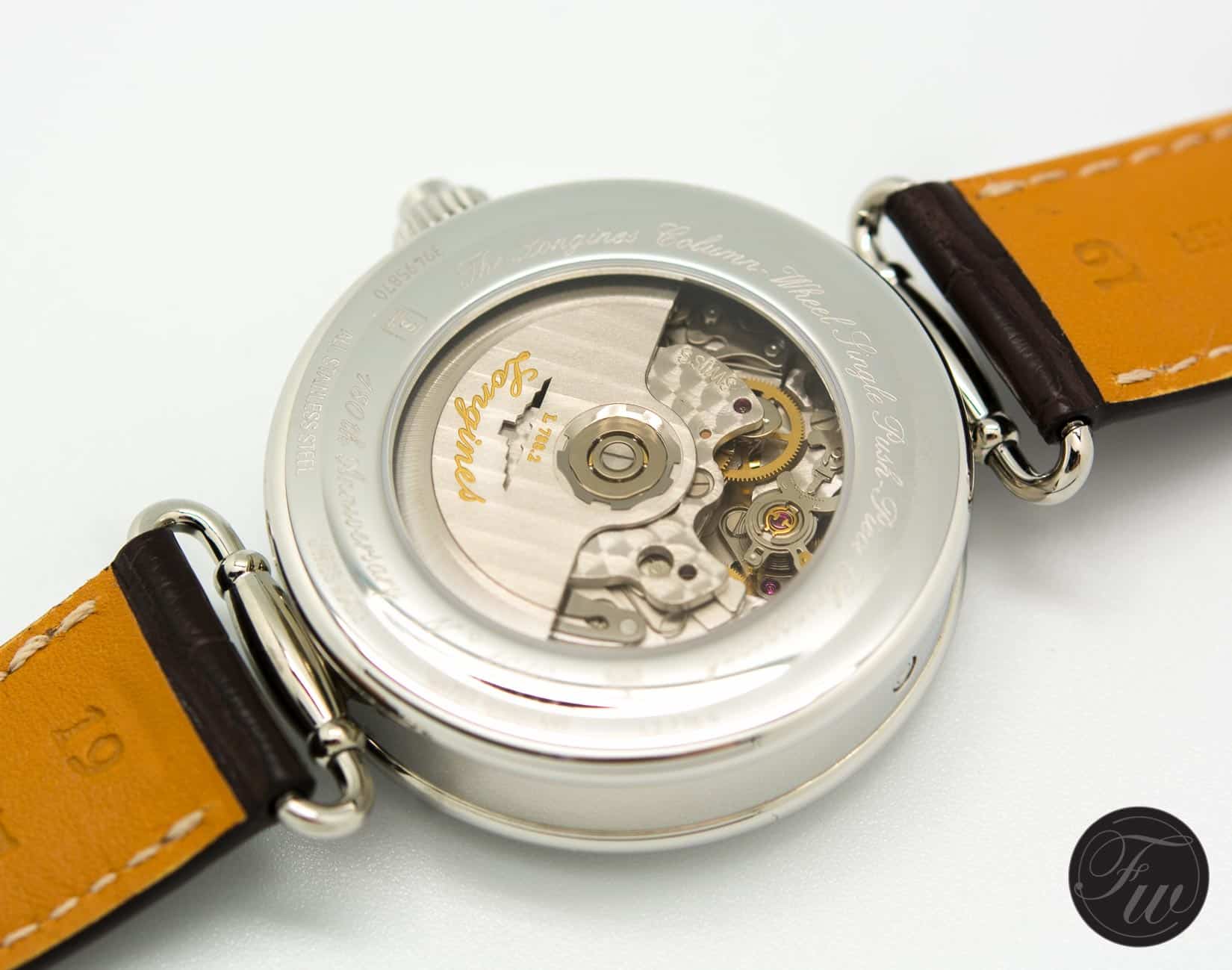 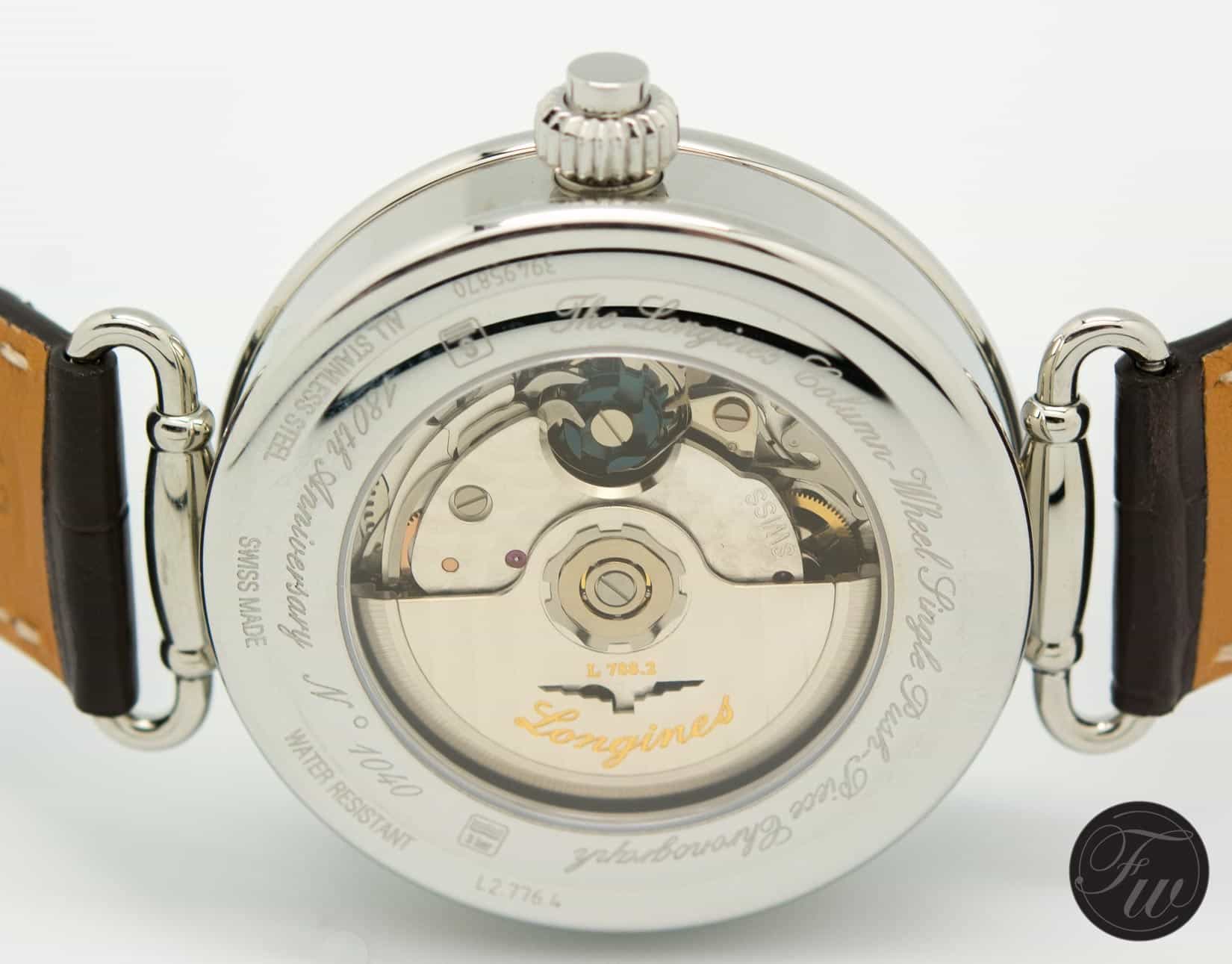 Longines’ caliber 788(.2) movement is visible through the sapphire case back. The stainless steel part of the case back gives a load on information to the owner. Some is useful, but it mostly isn’t. It is a numbered edition for the 180th anniversary of Longines (not limited) and it has some of the markings for being a Swiss Made, water resistant, sapphire crystal, stainless steel watch. Markings that could have been skipped in my opinion, as it is of no relevance. The other engravings are quite nice of course, with the model name on there as the dial does not have this (luckily).

Once you’ve read all that information, take a look at the movement. The column-wheel is blued and the rest of the movement has a nice optical finish. When you push the button to start, stop or reset the chronograph, all action can be witness on both sides of the watch. The dial giving you all the necessary information on the elapsed time, the movement showing you some micro-engineering coming to life. This ETA exclusive for Longines has a power reserve of 54 hours and ticks at 28,800 vph.

Who is this watch for? Well, my guess is that purists will leave this watch for what it is and look for something vintage. There are a lot of vintage Longines chronographs on the market and they are – as written above – quite sought after. Those watches come at a difference price as well. I’ve found a gold mono-pusher chronograph on Chrono24 that has a very different price tag (gold, true). 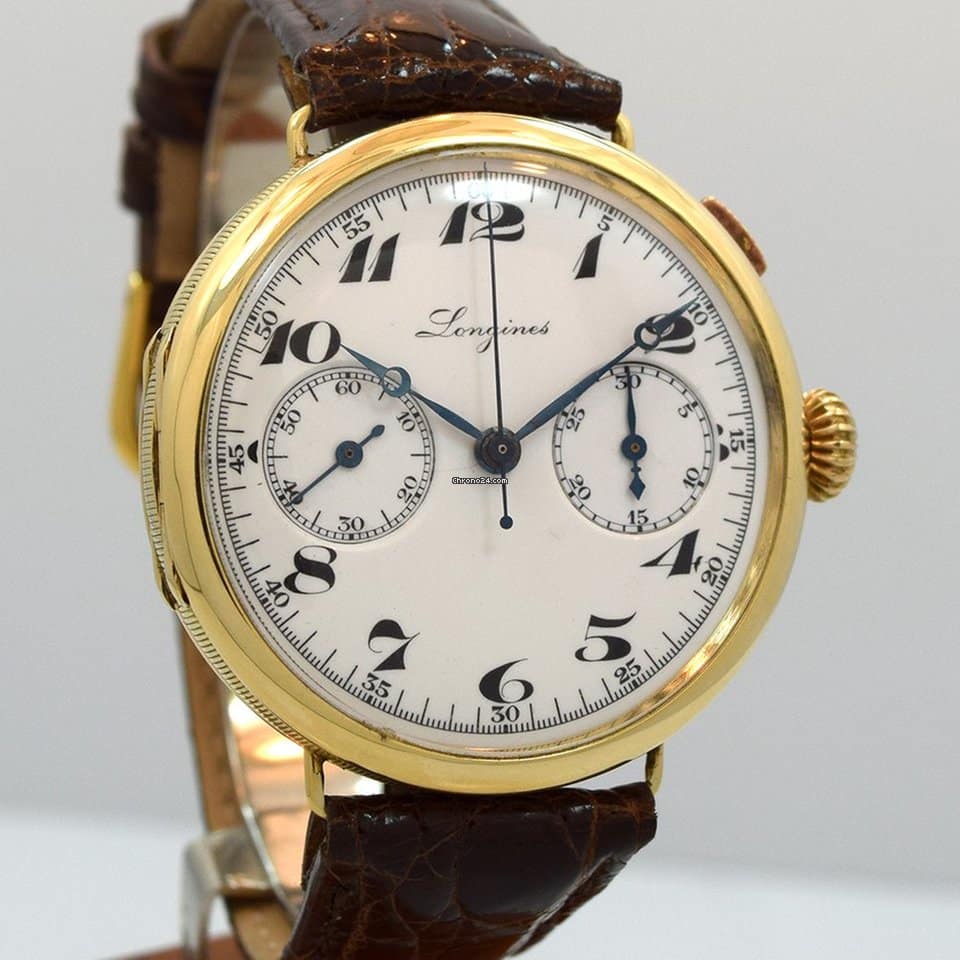 Those who don’t want to pay for these collector’s items or don’t want to get burned by possible frankenwatches but just want to have a solid modern piece that will run trouble free for decades to come, will be better off spending 4110 Euro (including VAT) for this new Longines Column-Wheel Single Push-Piece Chronograph or one of its brothers and sisters from the Longines Heritage collection.

For my personal taste, this white lacquered dial version with wire lugs was a bit too feminine and rather go for the versions with straight (normal) lugs. But this might be a perfect watch for you if you can deal with that, or for your wife or girlfriend.