From March 6th till March 15th, the 36th edition of the America’s Cup will take place. Just recently, Omega introduced its Seamaster Divers 300M Chronograph America’s Cup edition, with chrono lock. We wrote about it here. But last year, Omega debuted a very handsome Seamaster Planet Ocean America’s Cup Limited Edition, to celebrate the 36th race. We had the chance to go hands-on with it not so long ago and thought it would be nice to give it some attention right before the start of this year’s America’s Cup. 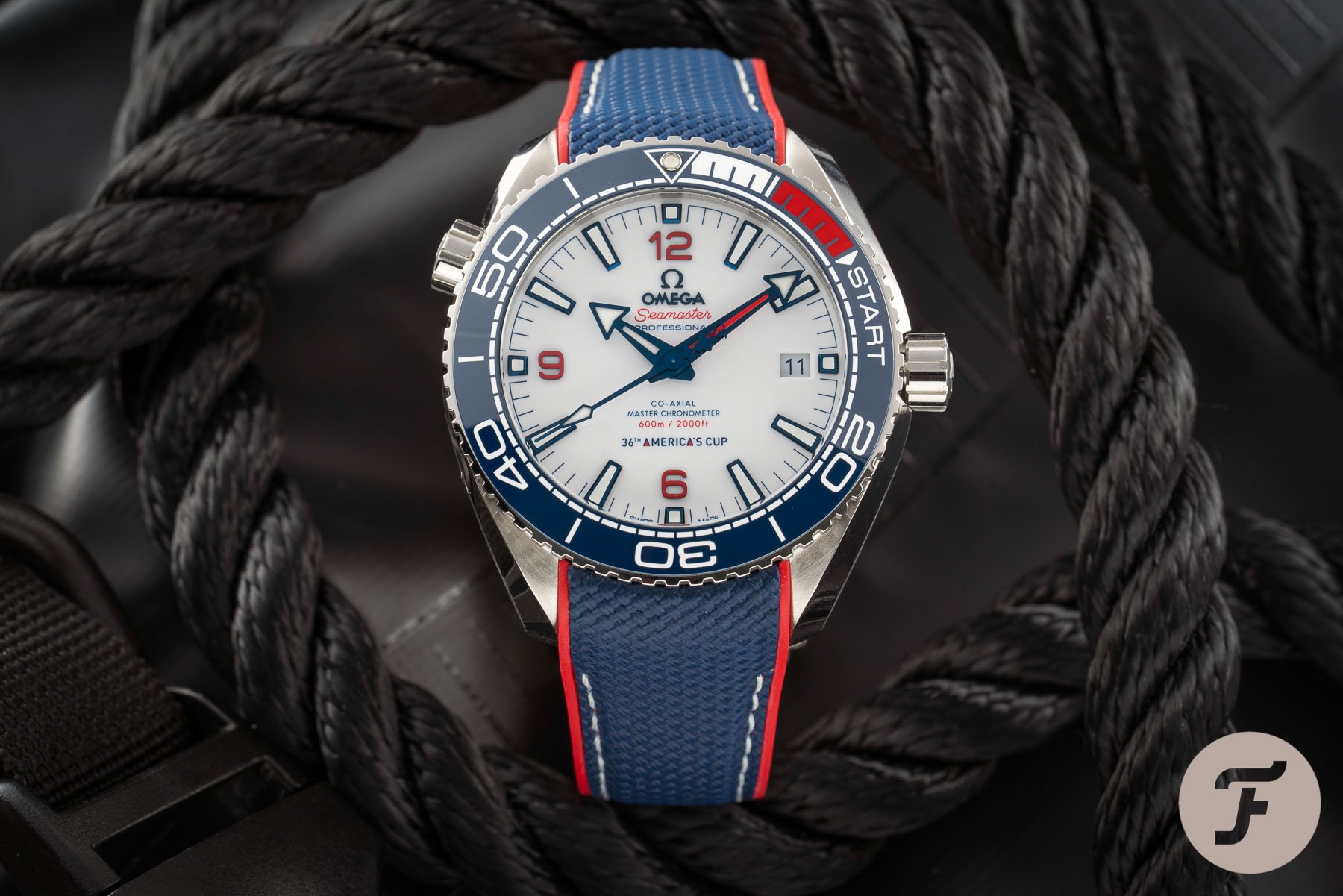 Omega’s Seamaster family consists of many members. We have the famous 300M, the heritage-inspired 300, the versatile Aqua Terra, the not-so-versatile PloProf, the funky Railmaster, and, the Planet Ocean. Together with the 300M and PloProf 1200M, I’d say the Planet Ocean (600M) is Omega’s proper diver’s watch. It is available in many flavors, and sometimes as a Limited Edition. Like this one, to commemorate the 36th edition of the America’s Cup. 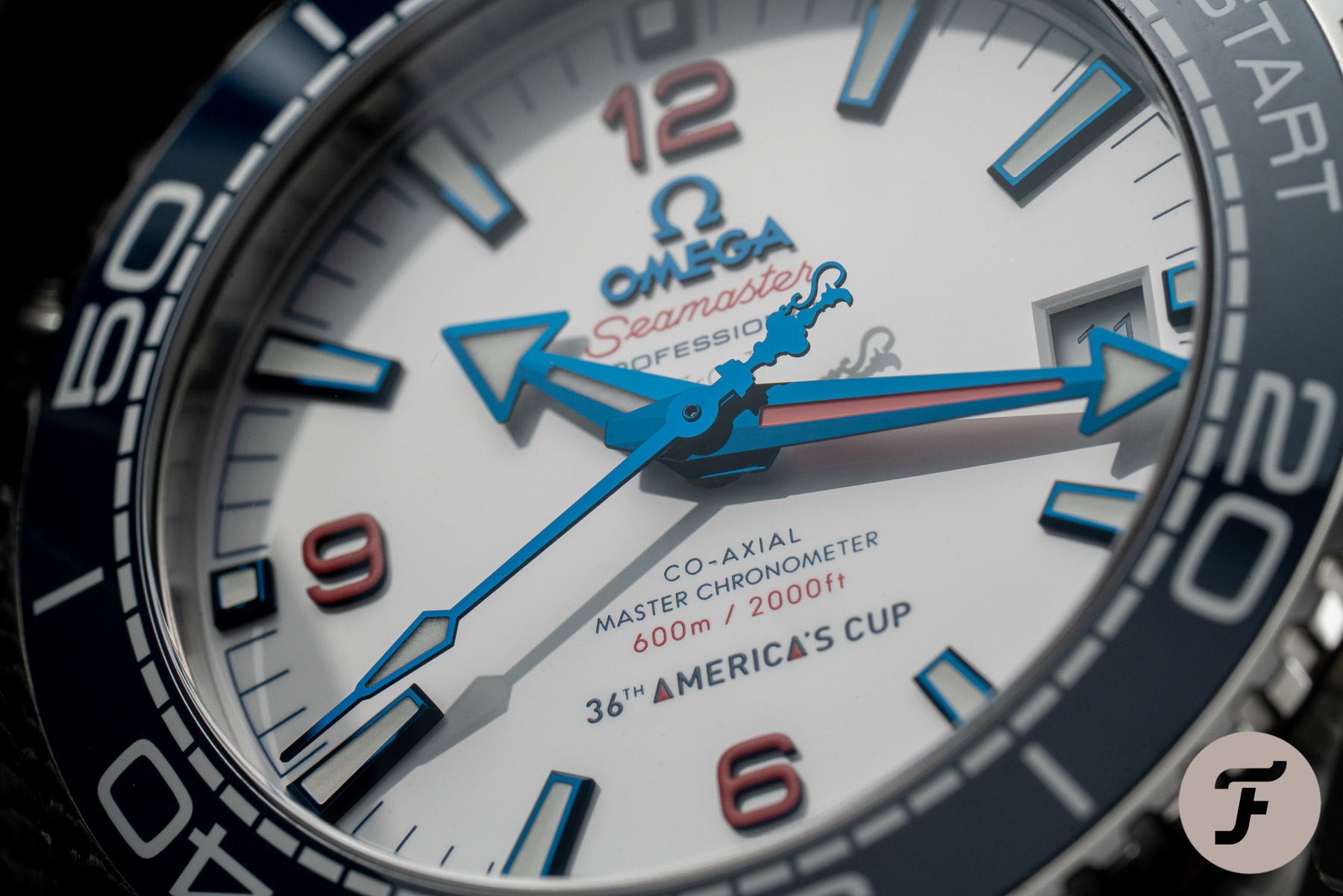 The Planet Ocean needs no further introduction, I am sure. It has been in the collection for quite a long time now, and is always packed with Omega’s latest technology. The Planet Ocean was one of the first collections to be equipped with the brand’s in-house movements, for example. But before we get to the technical specifications of the watch, let’s first look at the design details. Omega has the tendency to add a lot of details that relate to the topic. Whether that’s for a Bond movie or for something like the America’s Cup, there are always a lot of hints. 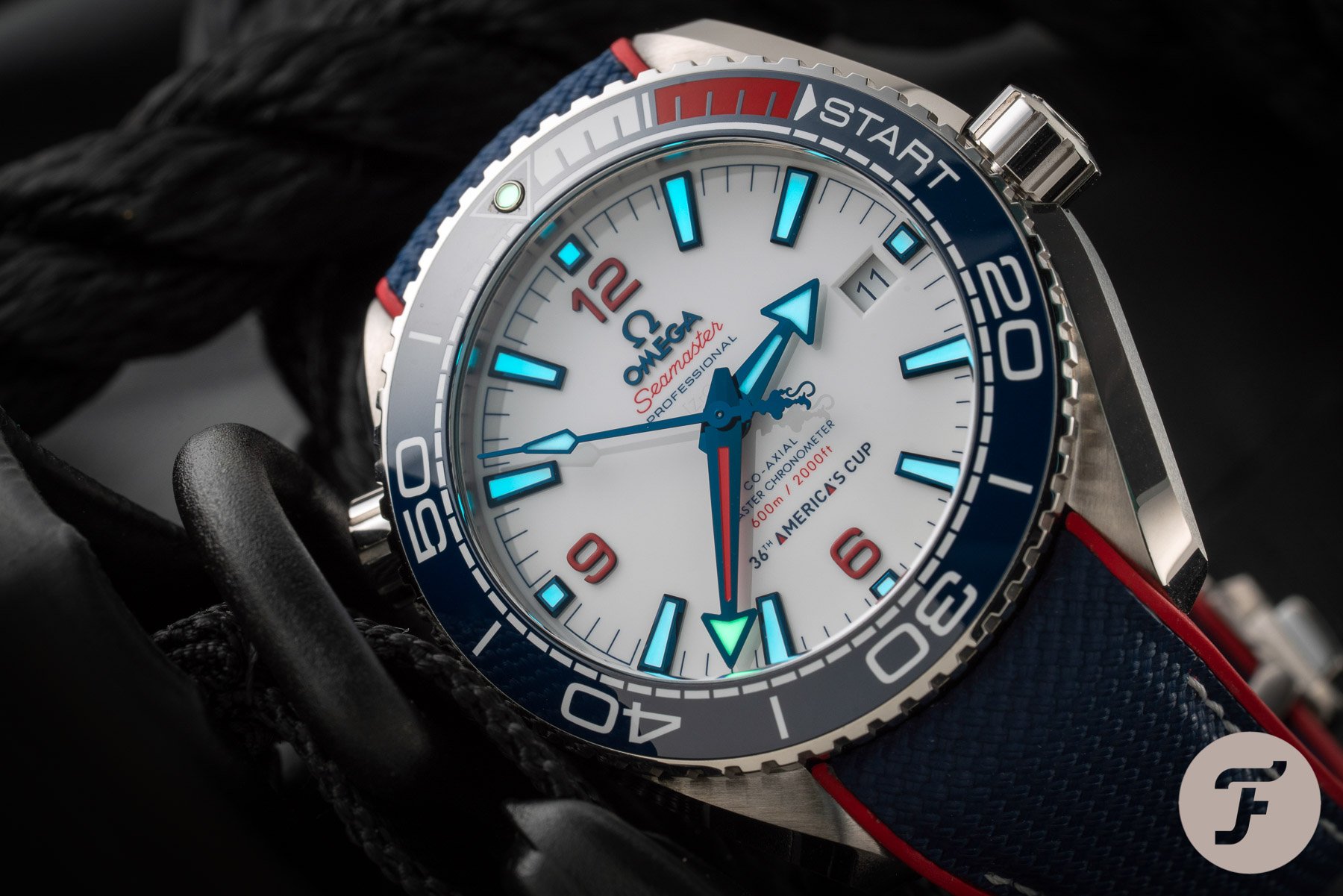 When looking at the dial, you’ll find the “36th America’s Cup” printing. A dead give-away, of course. Take a close look at the counter-weight of the central second’s hand, there you find the Auld Mug trophy. As you can see in the picture above, the luminous material (Super-LumiNova) is blue on all indexes and hands, except for the (broad) arrow on the minute hand and the dot on the ceramic bezel. Those are in green, to make a clear distinction during low-light conditions. 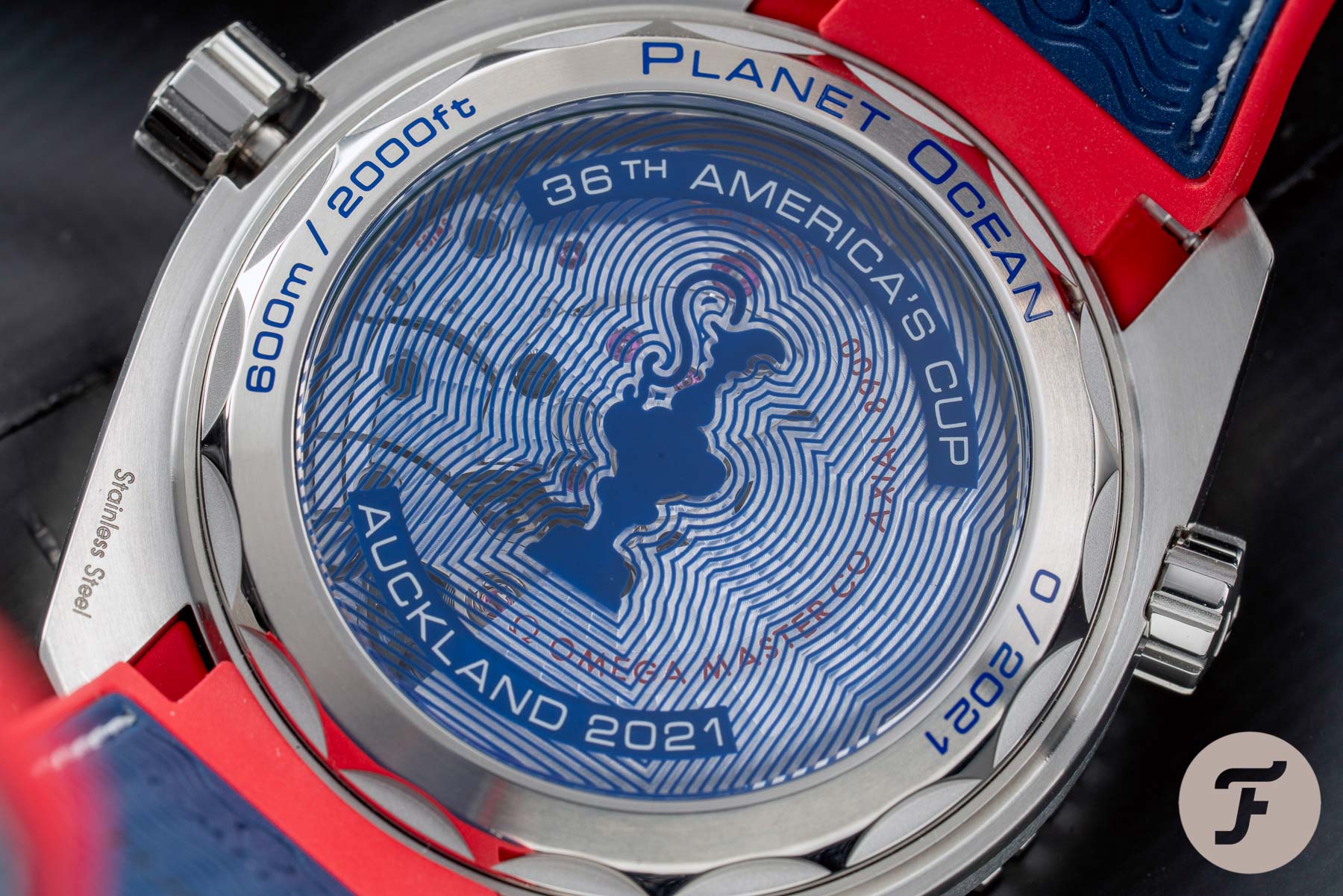 Ticking inside is Omega’s in-house developed caliber 8900. This movement is also used in other collections, such as the Constellation (Globemaster). It is Master Chronometer certified, meaning it has an accuracy of +5/0 seconds per day on average, even when the power reserve is running low. It is also anti-magnetic to at least 15,000 gauss.

We did a podcast with Omega’s VP of production, Mr. Andreas Hobmeier in which he explains everything there is to know about the Master Chronometer certification. You can listen to it here. Due to the logo, “36th America’s Cup” and “Auckland 2021” printing, as well as the pattern on the case back, it is a bit hard to have a proper look at the movement. It’s perhaps one of the few AC details I don’t particularly like. Details like this should never block or stop you from enjoying specific parts/features of a watch. On the case back, you will also find the unique number of this limited edition of 2,021 pieces. 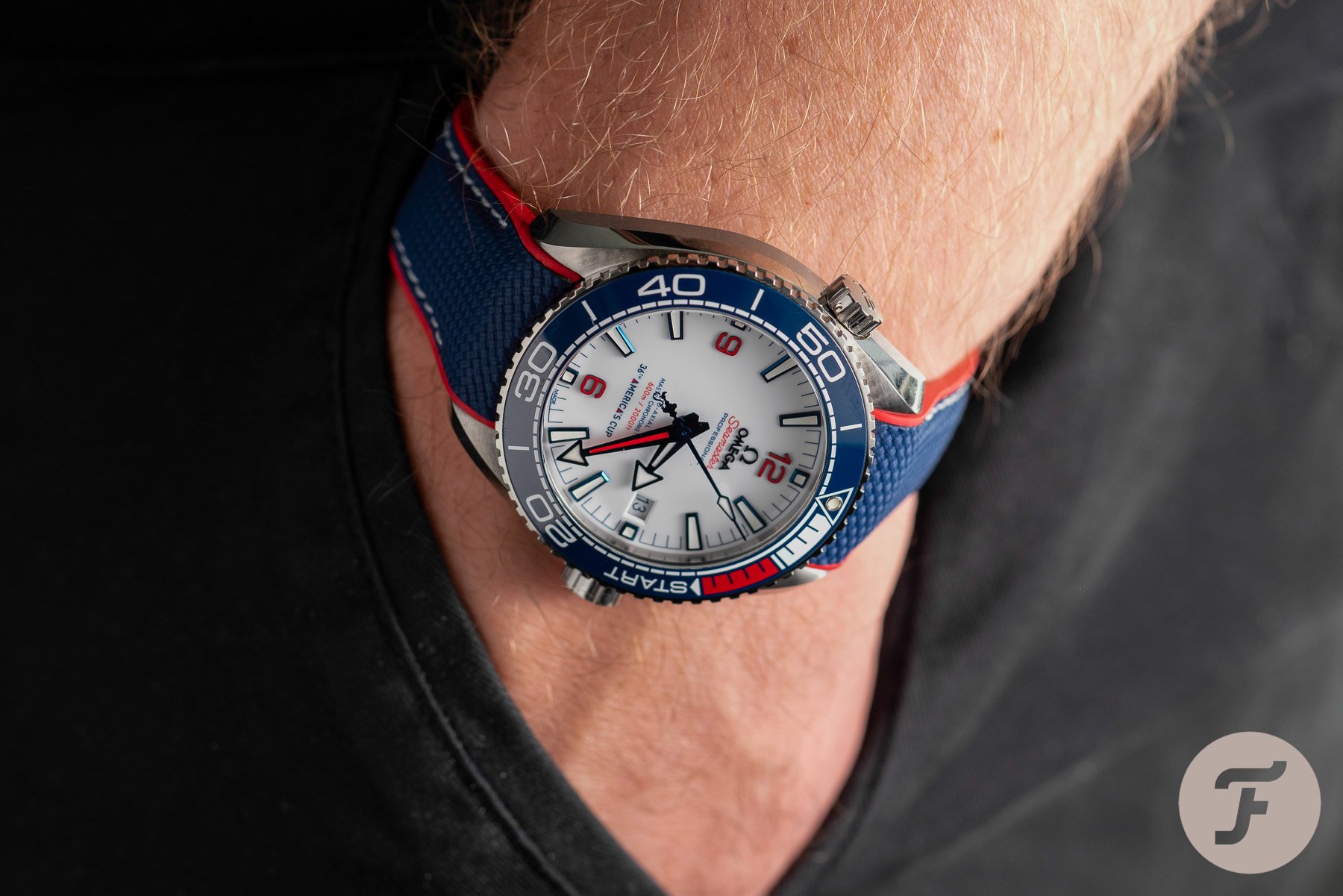 The proof of the pudding is in the eating, as they say. With a case diameter of 43.5mm, the Planet Ocean America’s Cup 215.32.43.21.04.001 is not a small watch. But, as you can see in the picture above, with a 19cm wrist it’s perfectly fine. There are no fancy America’s Cup gimmicks on this watch, like the 300M Chronograph with its chrono lock, but it does have a special marking on the ceramic bezel. The scale indicates a 5-minute count-down and start time, highlighted in liquid ceramic. This bezel really makes excellent use of Omega’s ability to bring together different colors of ceramic, which is something even brands like Rolex have struggled with (ever wondered why the blue of the Pepsi has that subtle purplish hue?). 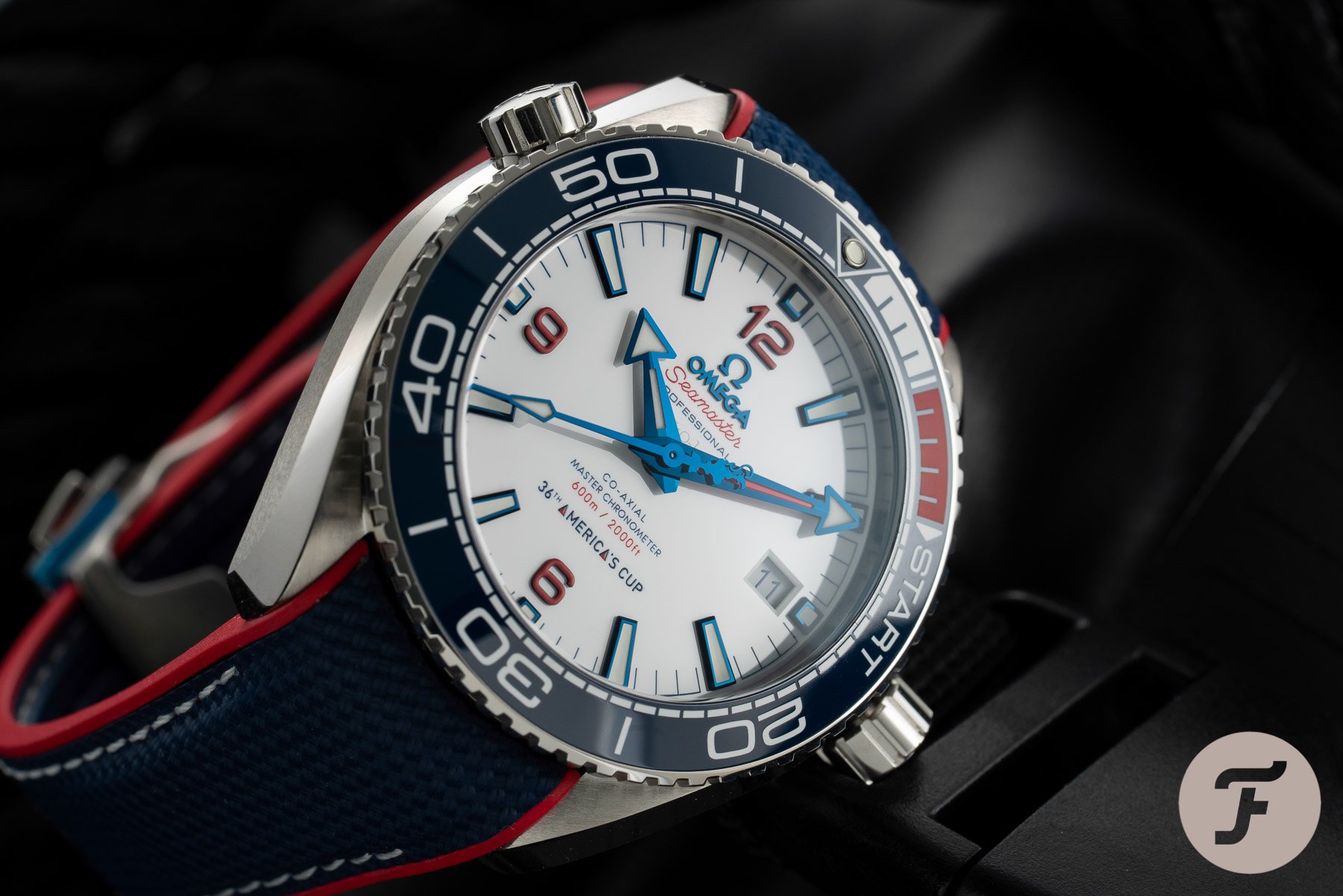 All other features are similar to the regular Planet Ocean 43.5mm models, including the manual helium escape valve. We explained it in our Seamaster 300M Magazine in detail (which can be downloaded here). 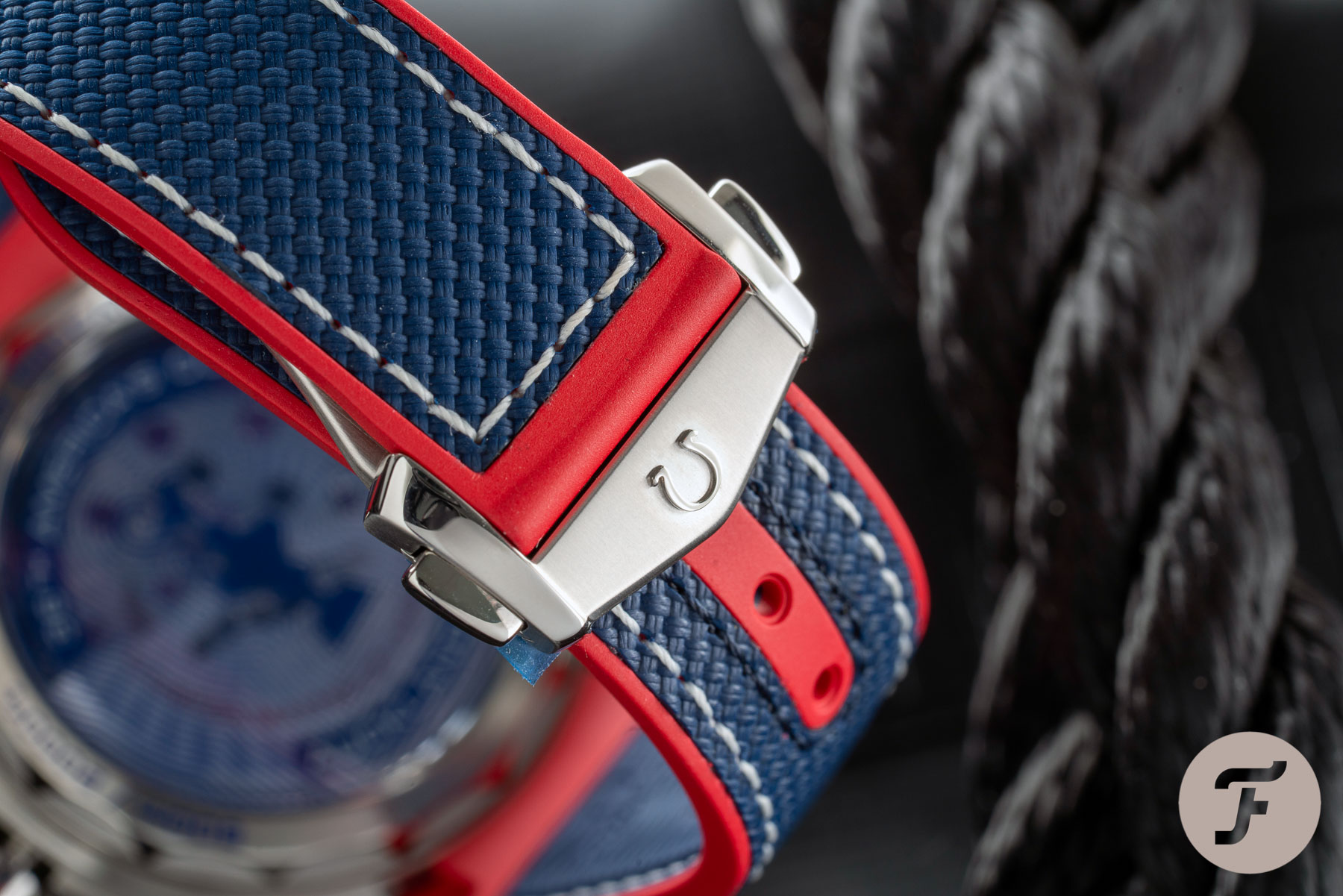 The blue rubber textured strap with red accents and white stitching wears super comfortably. It comes on the typical Omega folding clasp that can also be found on other models from the collection. It makes the watch perfectly wearable under all circumstances, basically. Whether that’s in the water, onshore, or even during a business meeting. It simply looks good. 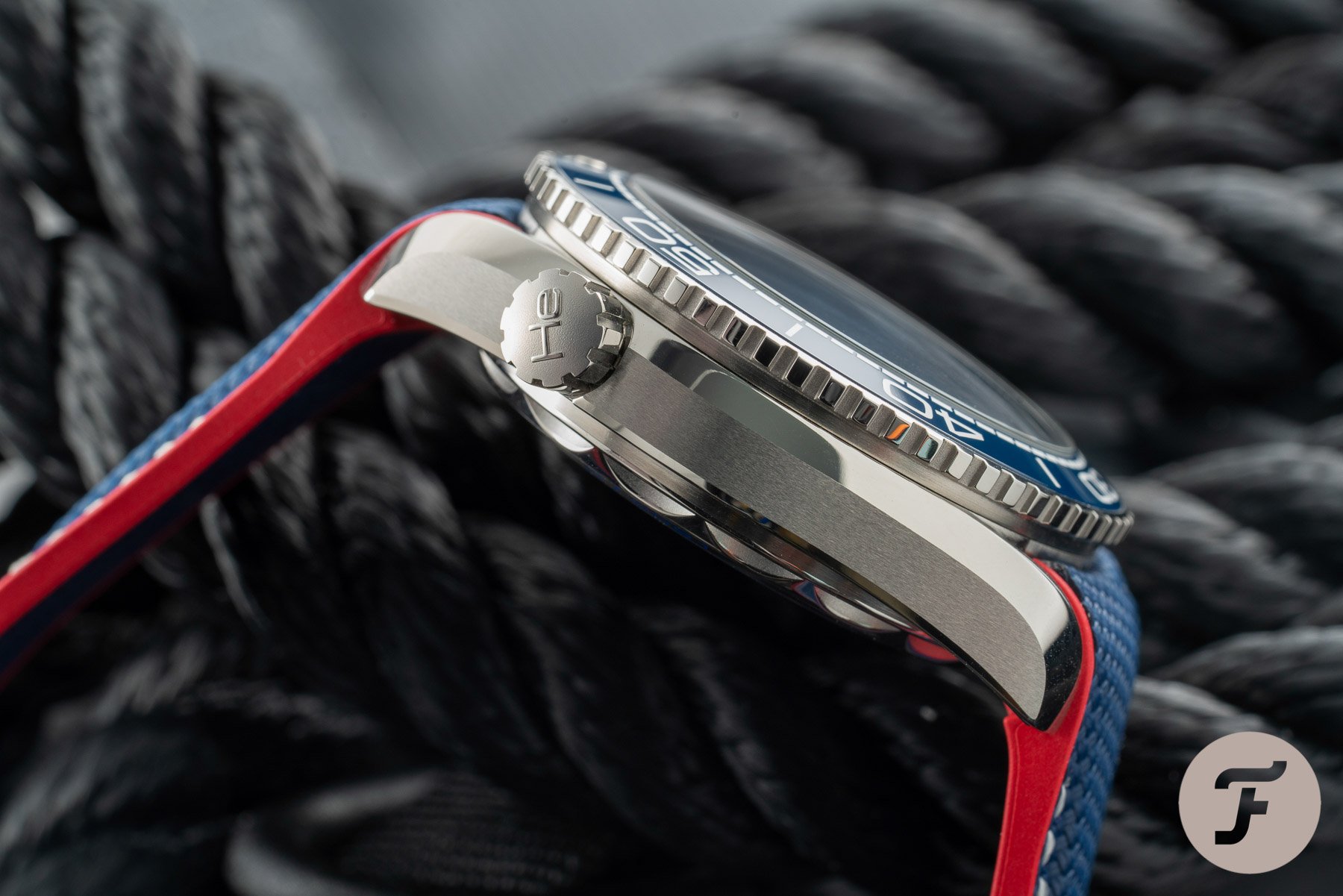 When wearing a watch like this Omega Seamaster Planet Ocean America’s Cup, I often wonder who the audience is for such a watch. Sure, if you like America’s Cup that much, it is the perfect watch for you. If you don’t mind the America’s Cup,  the color scheme might be a very good reason to purchase this Planet Ocean over one of the others from the extensive collection. The colors represent a lot of different flags around the world, including the Dutch, French, American, Russia, etc. I am pretty sure I won’t get an answer to that question, but sometimes it doesn’t take more than an “I like it” from someone who then just goes ahead and buys it.

More information can be found on the official Omega website.