Omega introduces this watch as a special edition. Meaning there is no unique number on the case, aside from the serial number. That means this watch will be in the collection for a certain (unknown) amount of time. My guess is that it is more or less the same as with the Speedmaster Tintin, although there was no partnership there (as we know all too well). Perhaps this watch will be in the collection as long as there is a partnership with Alinghi, or till the next Alinghi edition is created. Let’s have a closer look at the watch first, before I dive (no pun intended) into the Alinghi partnership. 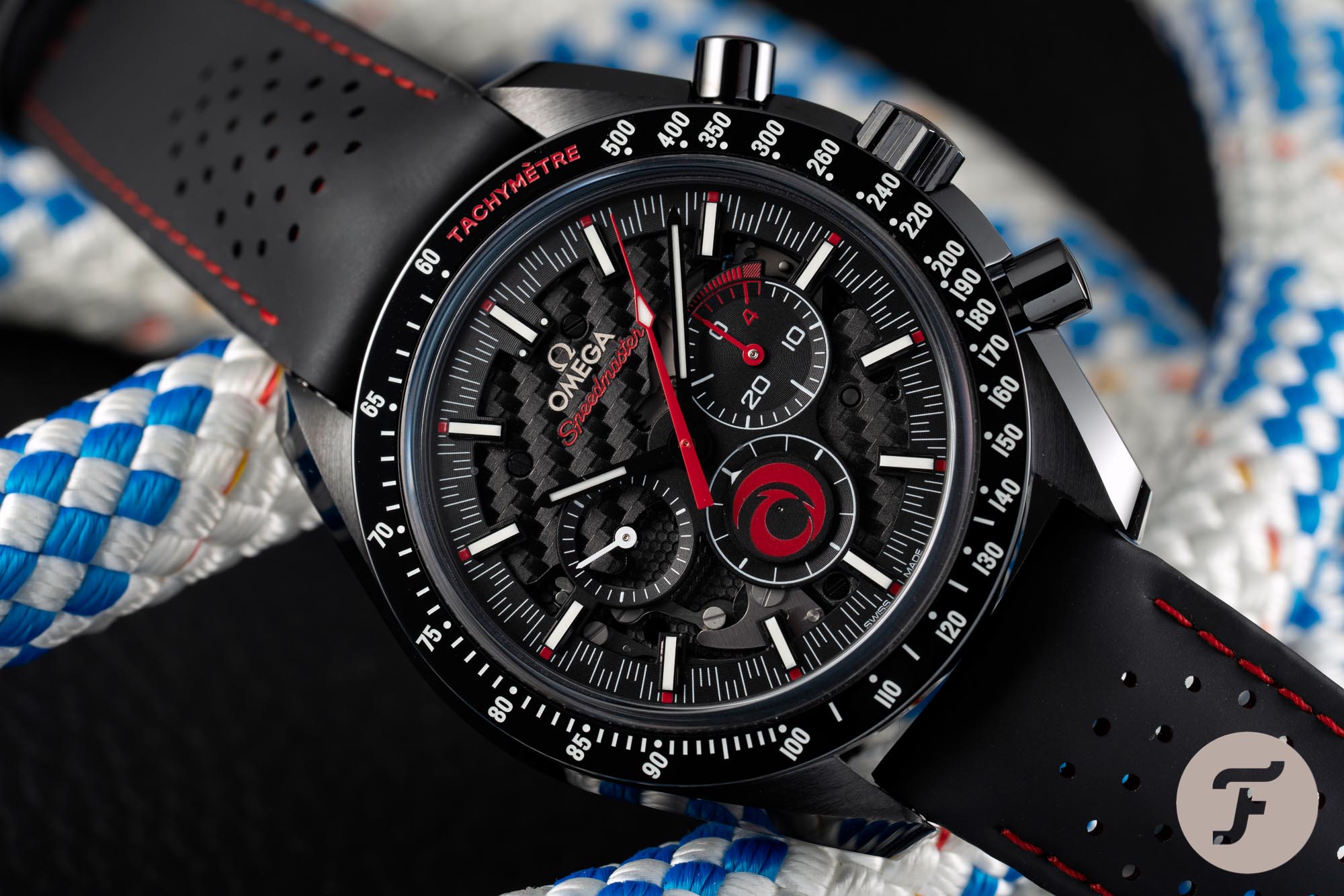 In this article from the end of July, I showed you the Omega Speedmaster Alinghi and discussed some of its details. I don’t want to go in recap mode, but just talk about how the watch works (or not) on the wrist. Of course, I will also touch upon the Speedmaster versus Seamaster discussion. More importantly, though, discuss the watch now that we’ve seen it in the flesh. 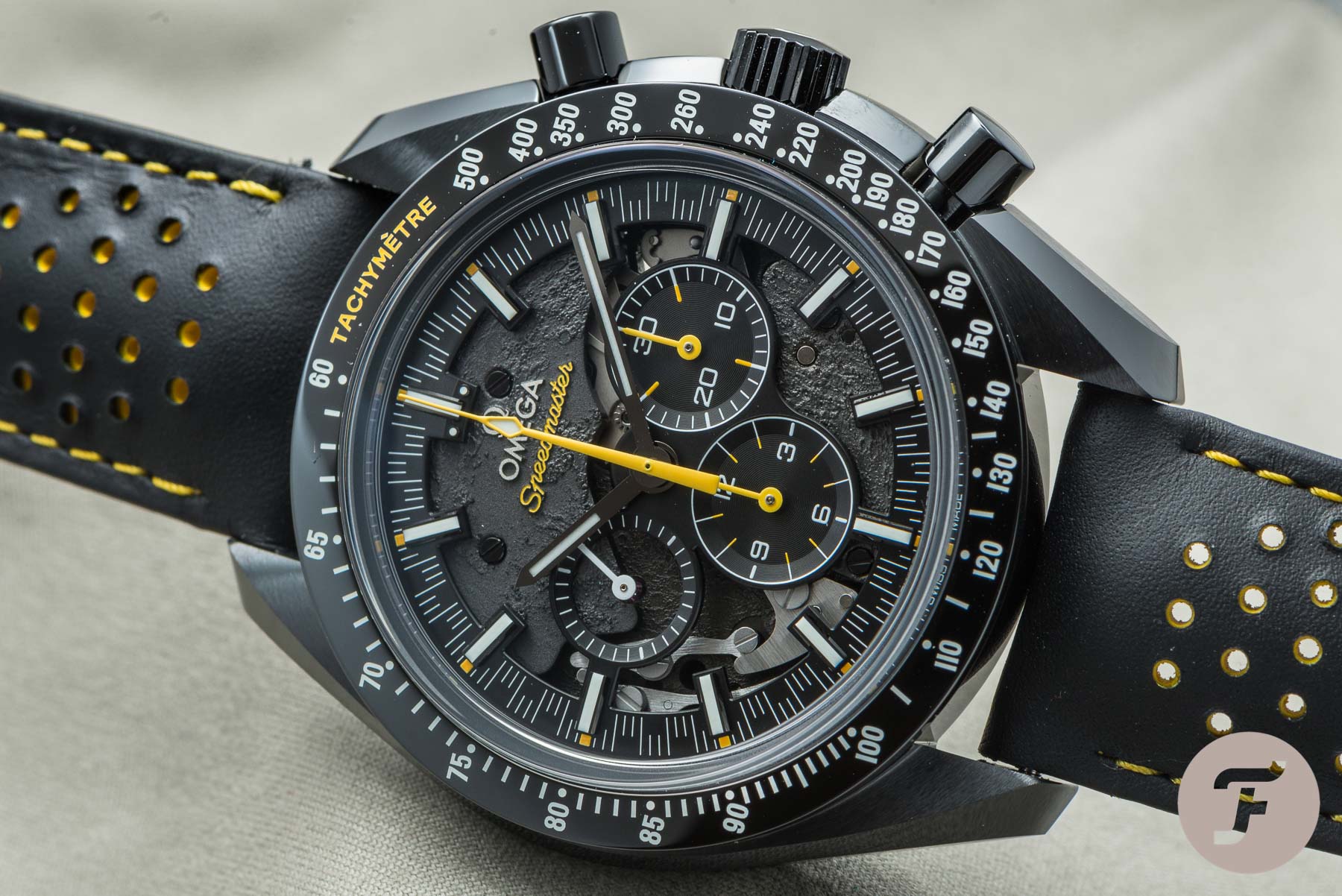 Dark Side of the Moon 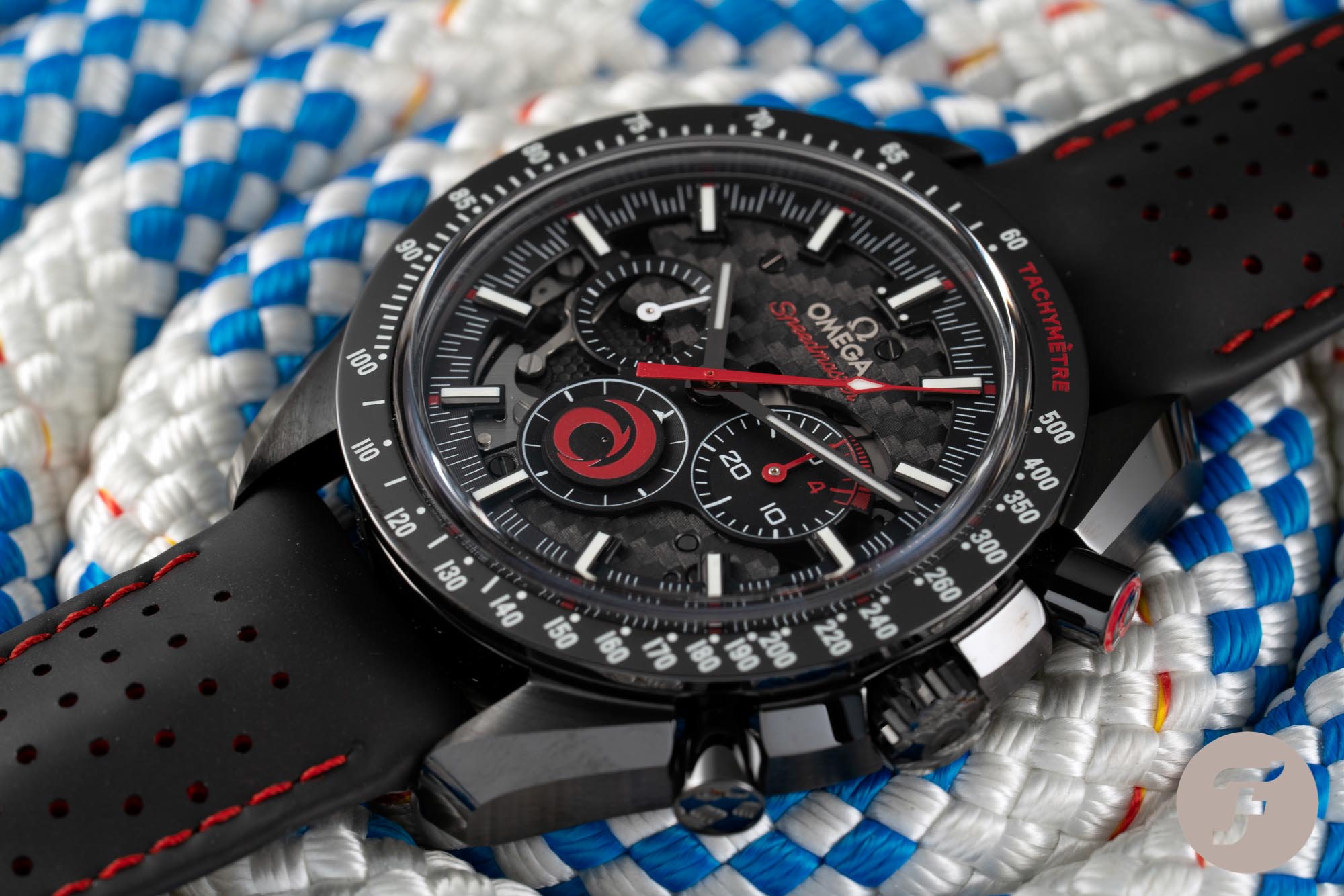 The Alinghi is not a Moonwatch

There, I said it. It is very clear to us, enthusiasts and collectors, but go to the Omega website and you will find the entire Dark Side of the Moon selection categorized under “Moonwatch”. I get Omega’s explanation, that it shares some DNA with the Moonwatch. Not only the case shape but also — in this particular case — the base movement. That said, it isn’t the Moonwatch, nor does it make sense to categorize it as such.

Creating a separate subfamily “Dark Side of the Moon” would make more sense, but further sub-dividing the Speedmaster category is clearly not a priority. That said, there are plenty of divisions already so surely one more for the sake of clarity wouldn’t hurt? It still makes more sense to add a subcategory than to call this the “Moonwatch”. End of rant. 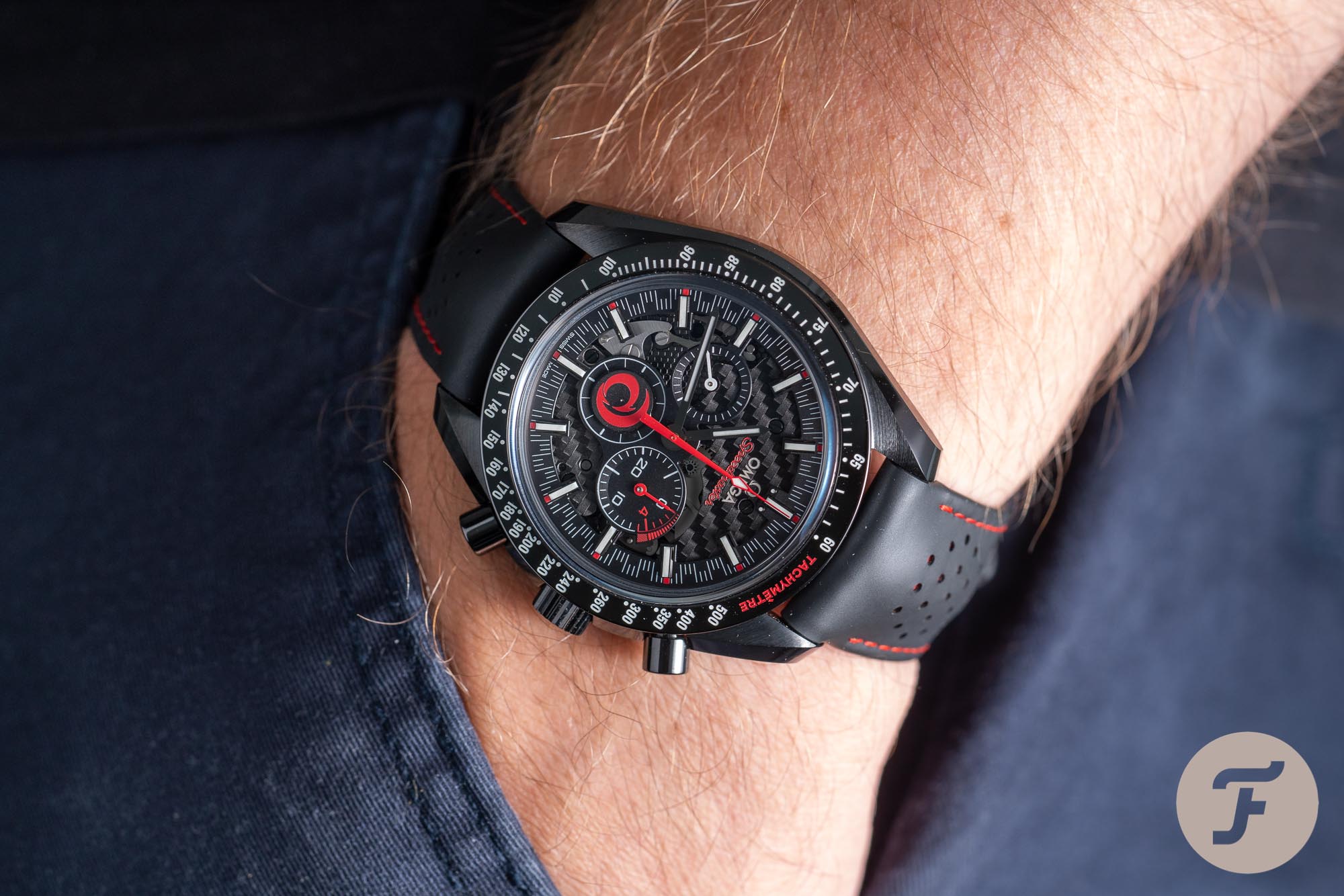 Omega Speedmaster Alinghi on the wrist

Now that we have that out of the way, let’s have a look at the Omega Speedmaster Alinghi on the wrist. Just like the OG Dark Side of the Moon, or the Apollo 8 edition, it is a 44.25mm case. But, it does wear a bit smaller than that. I didn’t unleash Rob’s Visual Impact Index methodology on the Alinghi, but I can imagine it is somewhere in the region of 1 millimeter less than the actual size.

Even with modest-sized wrists, you will get away with the 44.25mm diameter Speedmaster case. Even Michael Stockton’s baby-sized wrists handled the Grey Side of the Moon quite well a few years ago. I have a 19cm wrist size, and the watch handles very well. 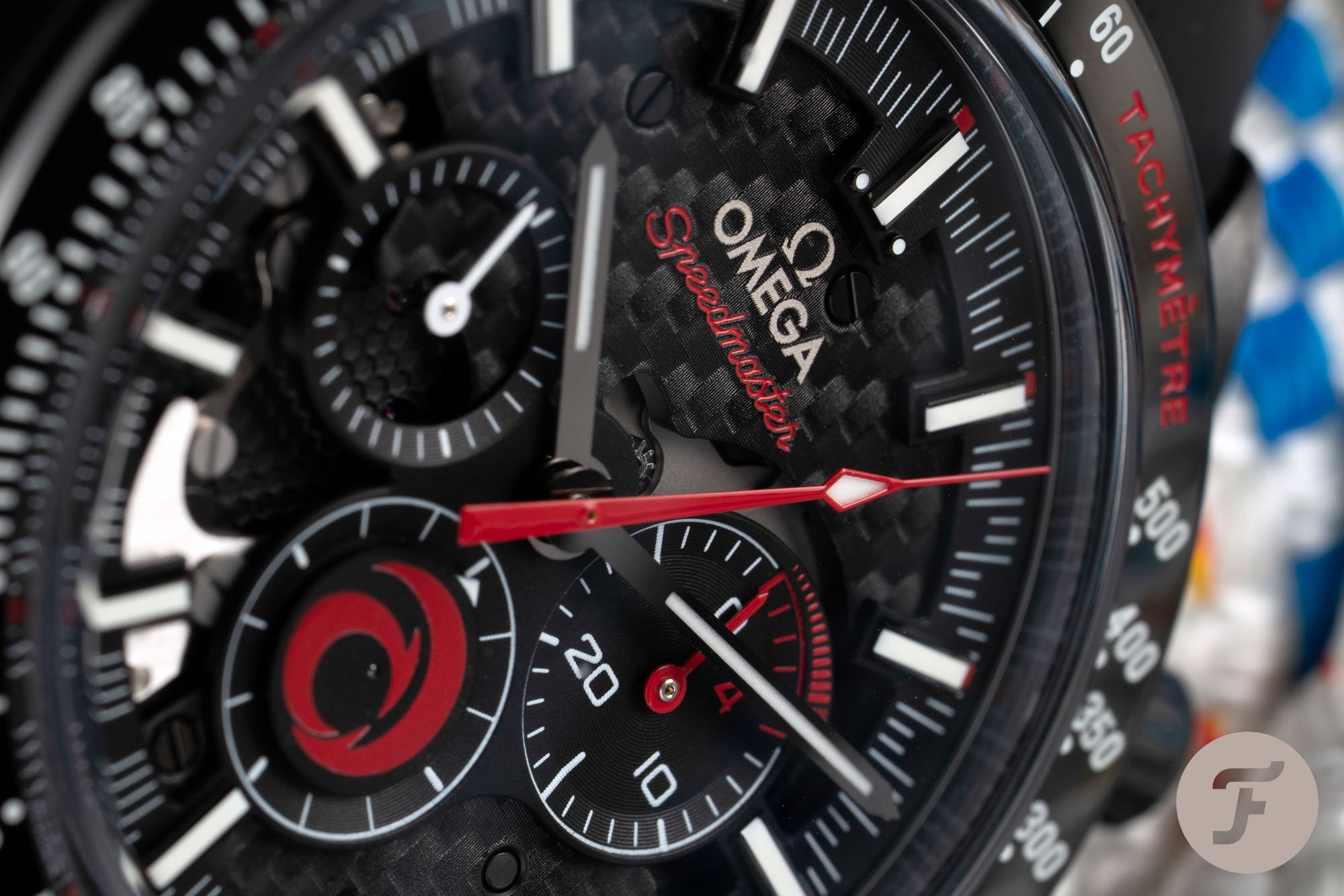 What I like about this Omega Speedmaster Alinghi, are the red accents. While I needed to get used to the yellow accents on the Apollo 8, the red Alinghi was easier to like out of the box. The thing I’ve read online, after its initial introduction, is that people have issues with the logo. If you’re not into Alinghi or sailing at all, the logo doesn’t make much sense. But, in the end, this watch is there to mark the partnership with Alinghi, so you’ll find the logo on the dial and on the pusher. In the end, it didn’t bother me. This might be different though if I were to purchase the watch for my own collection. Partnerships are always tricky in my book.

Alinghi teamed up with other watch brands in the past, just like Ferrari did, for example. Is this watch for Alinghi followers, sailing fanatics, or for Speedmaster enthusiasts? Or — another possibility — is it just for someone who likes the watch and the colors. In the case of the latter, it doesn’t really matter, except that there’s a logo of some company on the dial that has little meaning to them. If you can look past the Alinghi logo, this watch is just a great colorful addition to the DSotM collection. 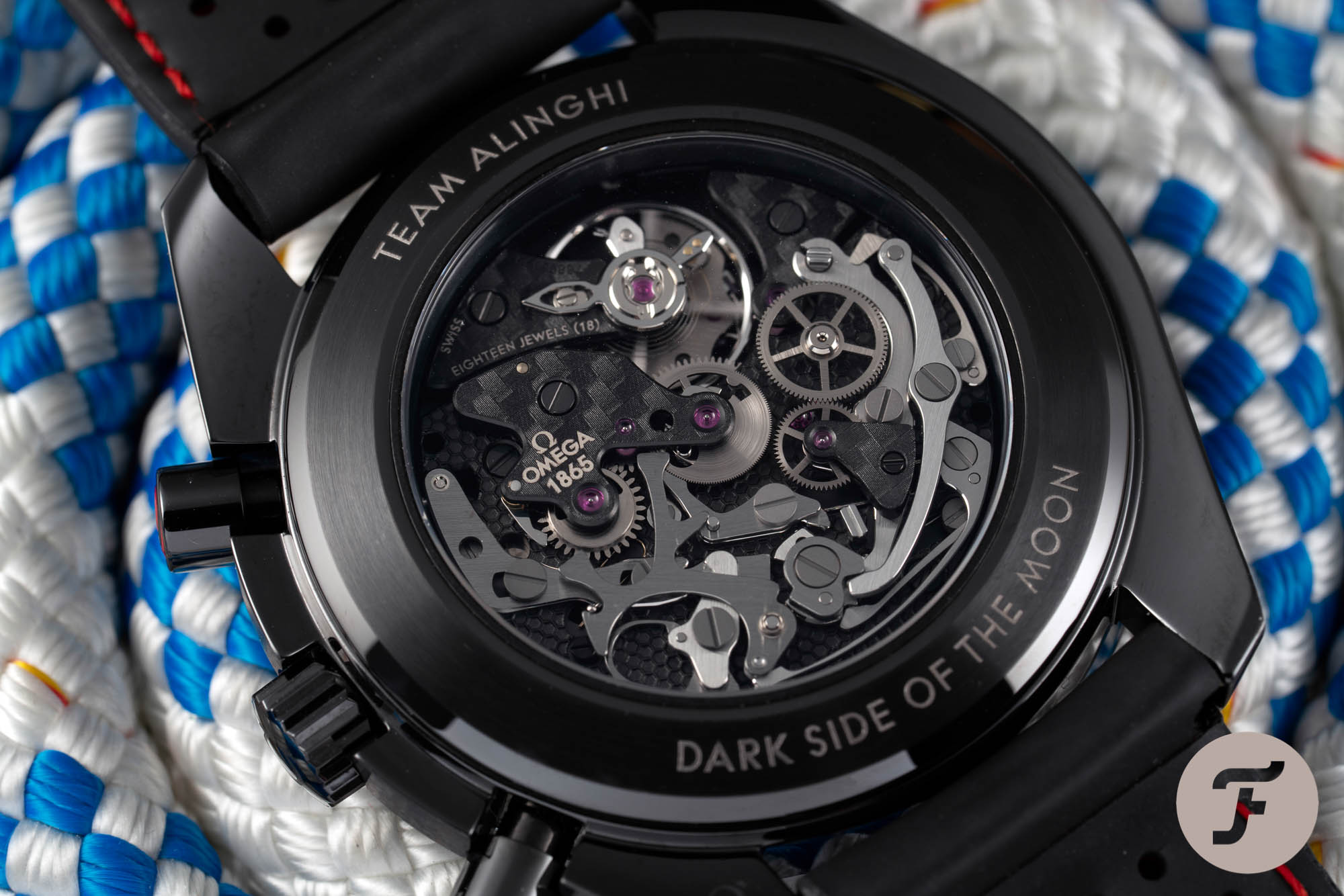 As I wrote in the introduction article a month ago, Omega used its laser ablation techniques to decorate the movement. This is applied on both sides, as the open-worked dial reveals parts of the movement as well. Caliber 1865 is using the famous 1861 as a base, but with different finishing (and colors), as you can see. Omega used the Alinghi ship as inspiration. You can see this in the carbon and honeycomb patterns on the dial.

In the distant past, Omega used the caliber 865 for its famous Genève Chronostop movement. While caliber 861 was a Moonwatch movement, and later updated to 1861, the caliber 865 wasn’t. Historically, the numbering is seen as a bit weird. On the other hand, I don’t see the brand coming back with a new Genève Chronostop watch any time soon. Whether you are into sailing or carbon etc. or not, the movement looks pretty awesome. I really enjoyed observing it during my time with this watch. 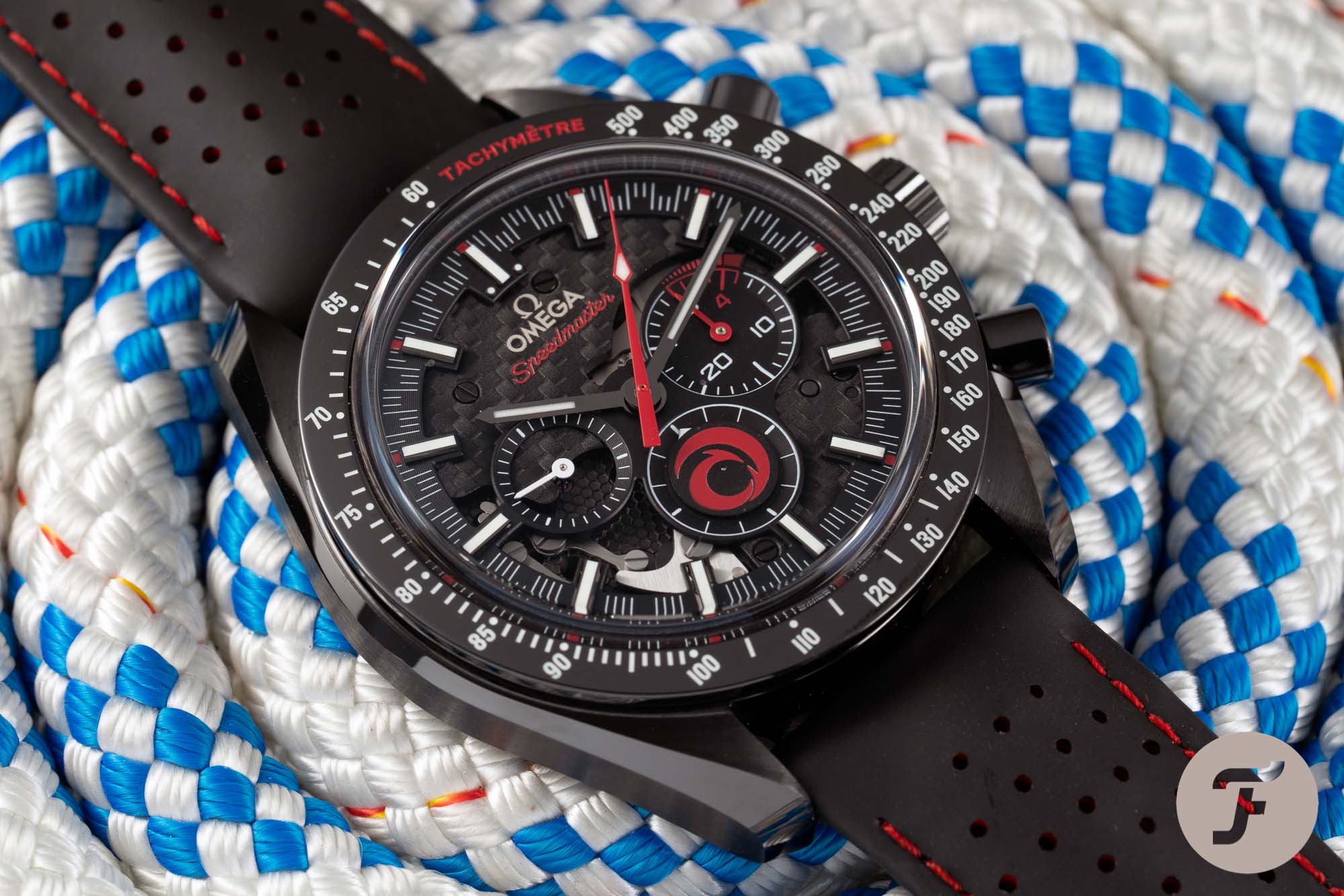 So, in the #SpeedyTuesday group on Facebook (consisting of a few thousand friendly Speedmaster fans), the most recurring response to this watch was “It should have been a Seamaster” or words to that effect. I get that. There’s sailing, there’s water, you might want to have a proper water-resistant watch. But, Omega decided to use the speed of the sailing boat as an angle. And, after all, sailing is not the same as swimming (as long as things go well). But, water equals Seamaster to many of you (myself included). 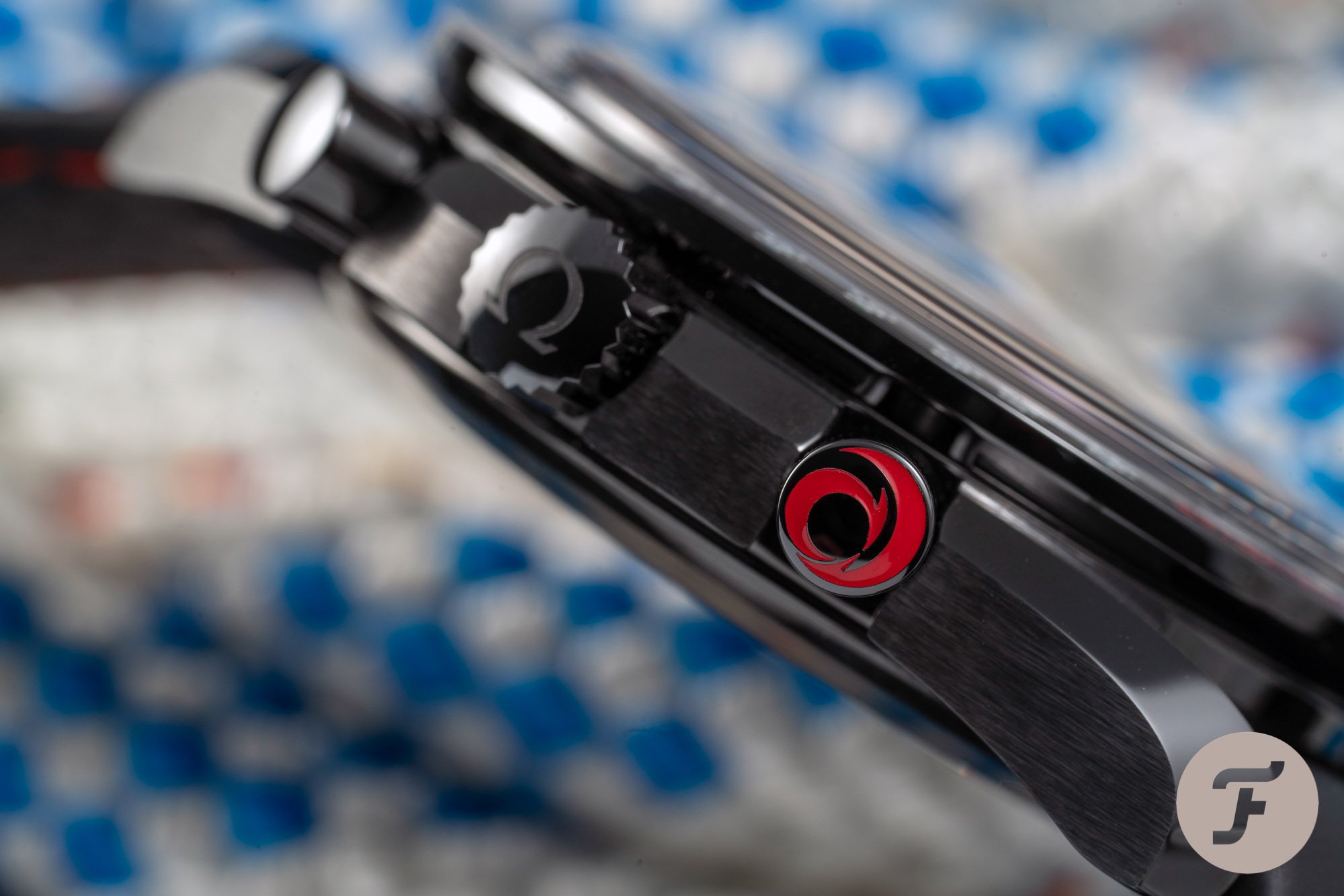 Verdict on the Omega Speedmaster Alinghi

Hey, it is no secret I collect Speedmasters and have a weak spot for Omega in general. I like a lot of things about this watch, such as the ceramic case, the beautifully finished movement, and the red accents. I just have a hard time associating a specific customer with this watch. Some of our readers, and Speedmaster fans, already bought or ordered one, just because they love the red and black. They don’t care much about Alinghi and just went for the watch. This is the healthiest approach I think.

Does everything need to make sense, or can you just buy a watch you like, or not buy a watch you don’t like? I don’t know any specific Alinghi fans or sailors, so I am not sure what this watch would mean to them. I also think there are people, who, for example, just bought one of the Speedmaster Snoopy editions of the Speedmaster Speedy Tuesday edition because they just like the design, and not specifically for the story behind it.

Although I don’t complain about the number of readers/visitors we receive every day here on Fratello, I am well aware that there are more people out there than us watch enthusiasts. People who just buy a watch because they like how it looks. And, perhaps, that’s also the most important rule when buying a watch. If they don’t mind the very specific logo, then that’s good for them. Will I buy this watch? No. I mainly collect “Moonwatch” models and if I add a DSotM edition, it will be the Apollo 8 for sure. 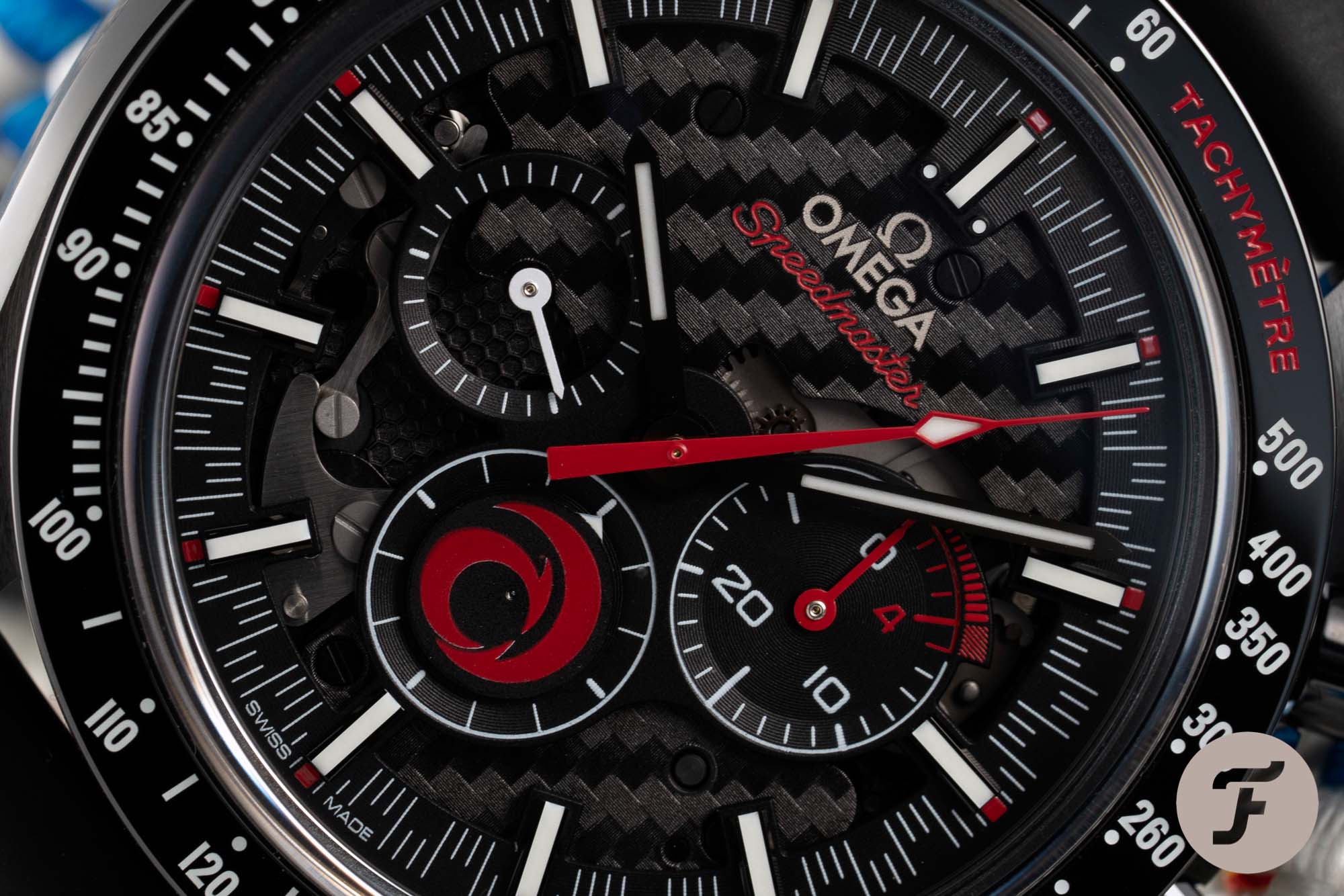 The black ceramic Omega Speedmaster Alinghi reference 311.92.44.30.01.002 comes on a rubber strap with a buckle. The strap has been perforated, giving it a sporty look. It works for me! You can easily put it on another strap, or NATO if that’s more to your liking. The retail price of this watch is €10,300 (including VAT). I already showed you the box in this article. It is similar to the Seamaster Ploprof packaging. Omega’s Speedmaster Alinghi is available already, but your best chance is with the official Omega boutiques.

The watch is not a limited edition, but rather a special edition. It seems that limited edition is becoming a bit of a “dirty word” in watch collecting, but for the collectors of a certain brand or model, it shouldn’t be (and luckily isn’t). Although the funny limited edition memes out there are plenty, you can wonder if those who make them, or agree with them, would have been customers anyway. A limited-edition surely puts some fun into the game of hunting for a watch, and some editions shouldn’t be always in the collection in my opinion. Numbered editions or special editions are just dodging the “limited” bullet, but in the end, it is exactly the same thing (but sometimes without a specific number). More information on the Speedmaster Alinghi here.