Oris is a sympathetic brand in my opinion. Independent (but not small) and very strong in the sub €2000 price range. We covered their Aquis and Sixty-Five Divers watches a number of times, as these are great value propositions. What also helps for us watch journalists, is that the people behind Oris are also sympathetic and real watch enthusiasts. That doesn’t help or mean much for the end-consumer perhaps, at least not directly, but believe me, it does for us when the people behind a brand share the (true) love for watches. However, being very strong in that €1000 to €2000 segment, what happens if a brand like Oris creates a watch that retails for nearly €5000?

For that kind of money, you are entering the world of (other) big brands like IWC, Omega, Breitling and – almost – Rolex that are able to offer a three-hands watch with in-house movement. One, there is more in the world than those brands (says the Speedmaster collector) and second, Oris offers a bit of extras with this watch: a 10-day power reserve. The manufacture Oris Caliber 111 is a large movement, one we also found in their Artelier watch that we reviewed here. Oris now housed this movement in the Big Crown ProPilot Calibre 111 that I am reviewing today. 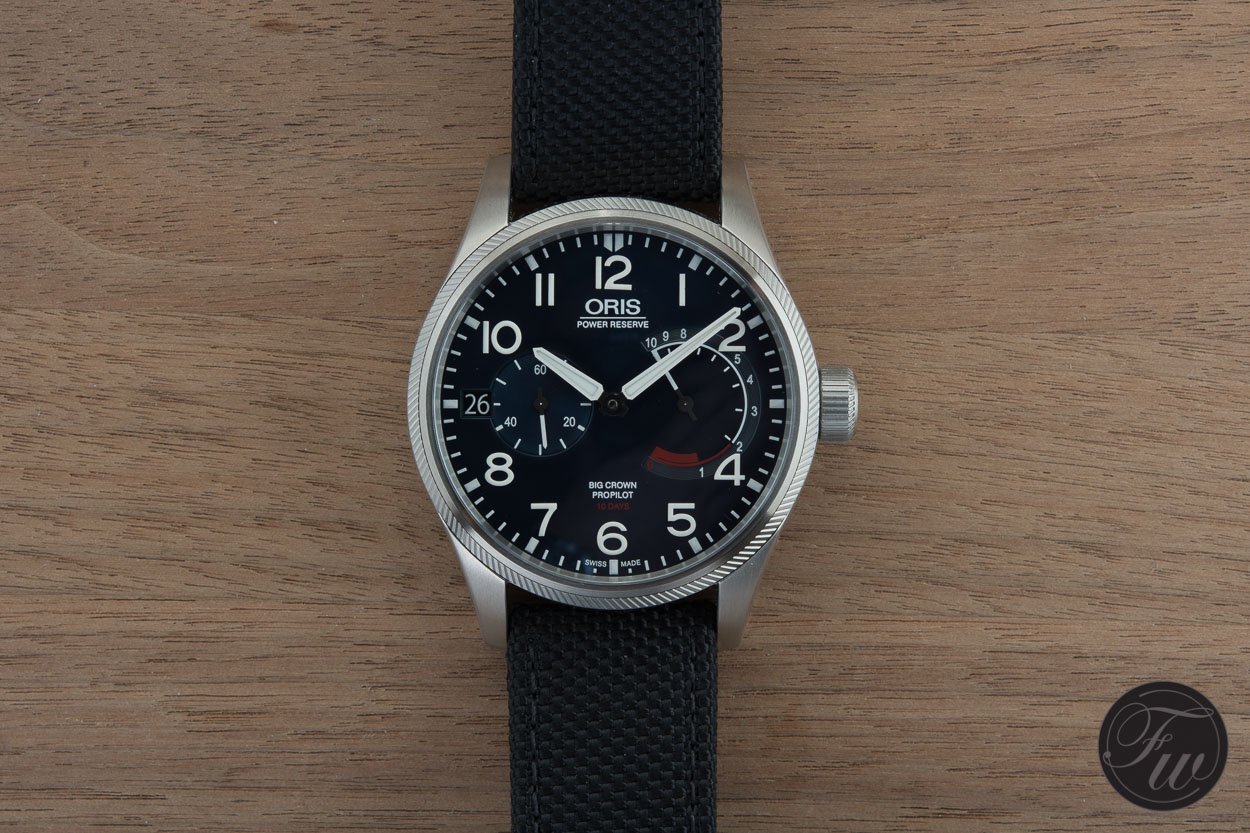 After opening the grey cardboard box, I find the small square shaped wooden box (with Oris printed on one of the sides) and a little but heavy black book. This book includes a generic instruction manual for all (or most) Oris watches in seven languages, an overview of international service centers, your warranty card and a little card that asks you to register on their website and join ‘MyOris’ for an extra year of warranty on top of the two years international warranty (which is mandatory in the EU anyways) as well as receiving exclusive Oris newsletters, invitations to events and competitions.

But let’s have a look at the Oris Big Crown ProPilot Caliber 111 first. Opening the wooden box unveils the 44mm large watch, with a handsome dark blue dial with large white Arabic numerals and two big sub dials. As the name of the watch already implies, there’s a big crown at 3 o’clock for winding and setting the watch. The screw-down crown will wind the watch in position 0, correct the date in position 1 and move the hour and minute hands in position 2. More about that later.

Even though the diameter of the dial is quite large, it does look a bit cluttered. This is due to the large white Arabic numerals, several lines of writing (ORIS, Power Reserve, Big Crown ProPilot 10 Days and of course the almost mandatory Swiss Made) and two large sub registers and a date aperture. Having that said, there are no issues reading the time or the information from the two sub dials, mainly due to their large size and white (on dark blue) printing. The non-linear power reserve indication is larger than the small seconds dial at 9 o’clock, but it actually looks nice and isn’t disturbing at all. The date aperture (white printing on a dark background) looks a bit crammed between the hour marker and small seconds dial, but because there’s no printed frame around the aperture, it doesn’t look out of balance. Perhaps I would have preferred it to be at 6 o’clock, but after wearing the Oris Big Crown ProPilot Calibre 111 for a while it didn’t bother me at all. 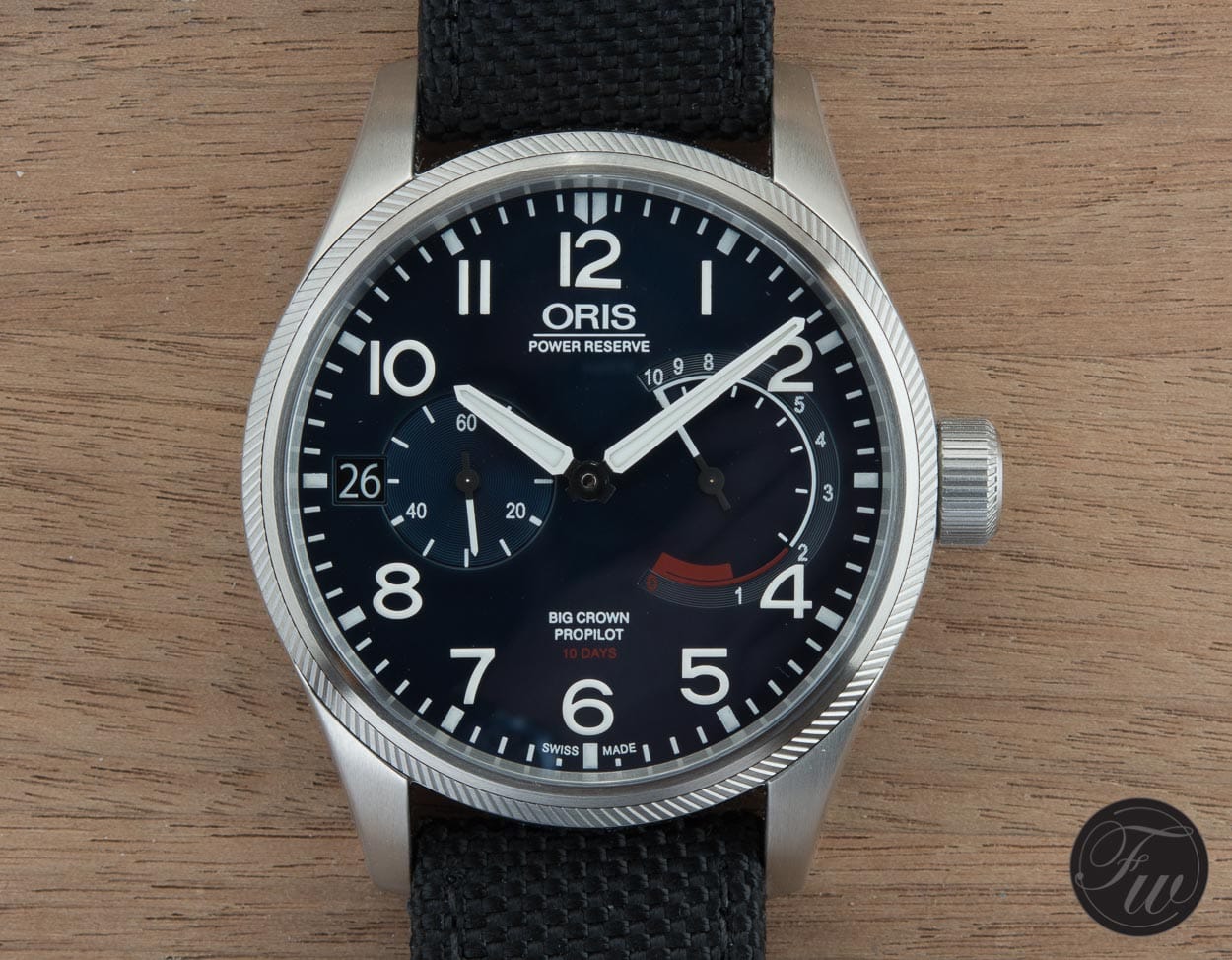 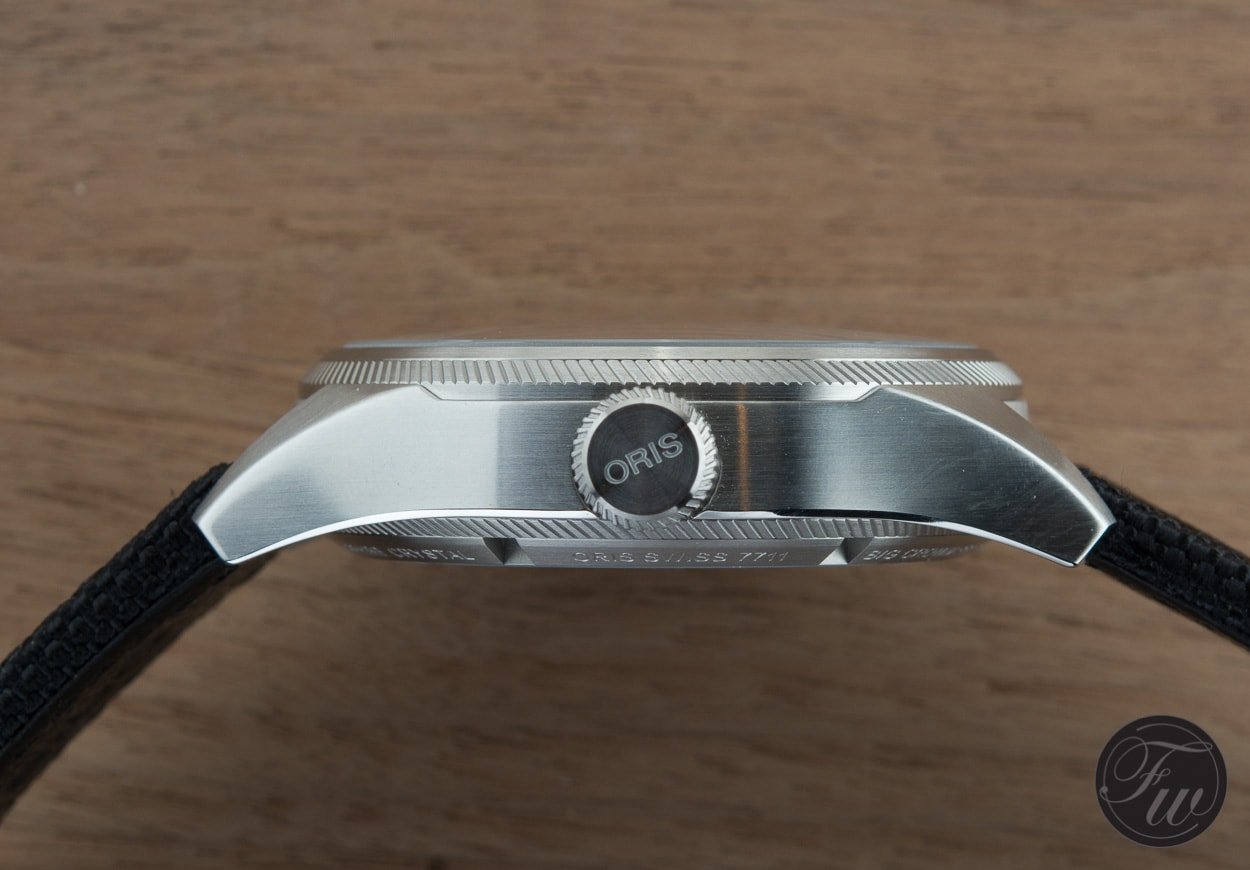 When I took the Big Crown ProPilot Calibre 111 out of its box, I unscrewed the signed crown and started winding the watch. All the way to 10 days of power reserve, took me 217 turns of the crown. 217! Not enough to get blisters, but it surely took a while. I also found that the crown doesn’t block when it is fully wound, at least I have up after 280 turns. I assume a little clever mechanism is used to protect the movement from being over-wound. Well, at least it results in a whopping power reserve of 10 days. The number of total turns probably isn’t much different from winding a +/- 50 hours power reserve hand-wound watch during 10 days of wearing, but the time it takes to do it all at once was kind of a shocker to me.

That brings me to the movement, Oris’s Calibre 111. I zoomed in on Oris’ history of movements in this article that I mentioned before, but this time I am looking at a in-house movement. Oris states that this movement has been developed by them, which indicates that at least some of the parts are being supplied by others, and perhaps partly pre-assembled by others as well. Nevertheless, it is an exclusive movement to Oris and their own development. The movement can be observed via the case back, which is made of mineral crystal. To be honest, I expected – in this price range – a sapphire crystal on the case back as well. 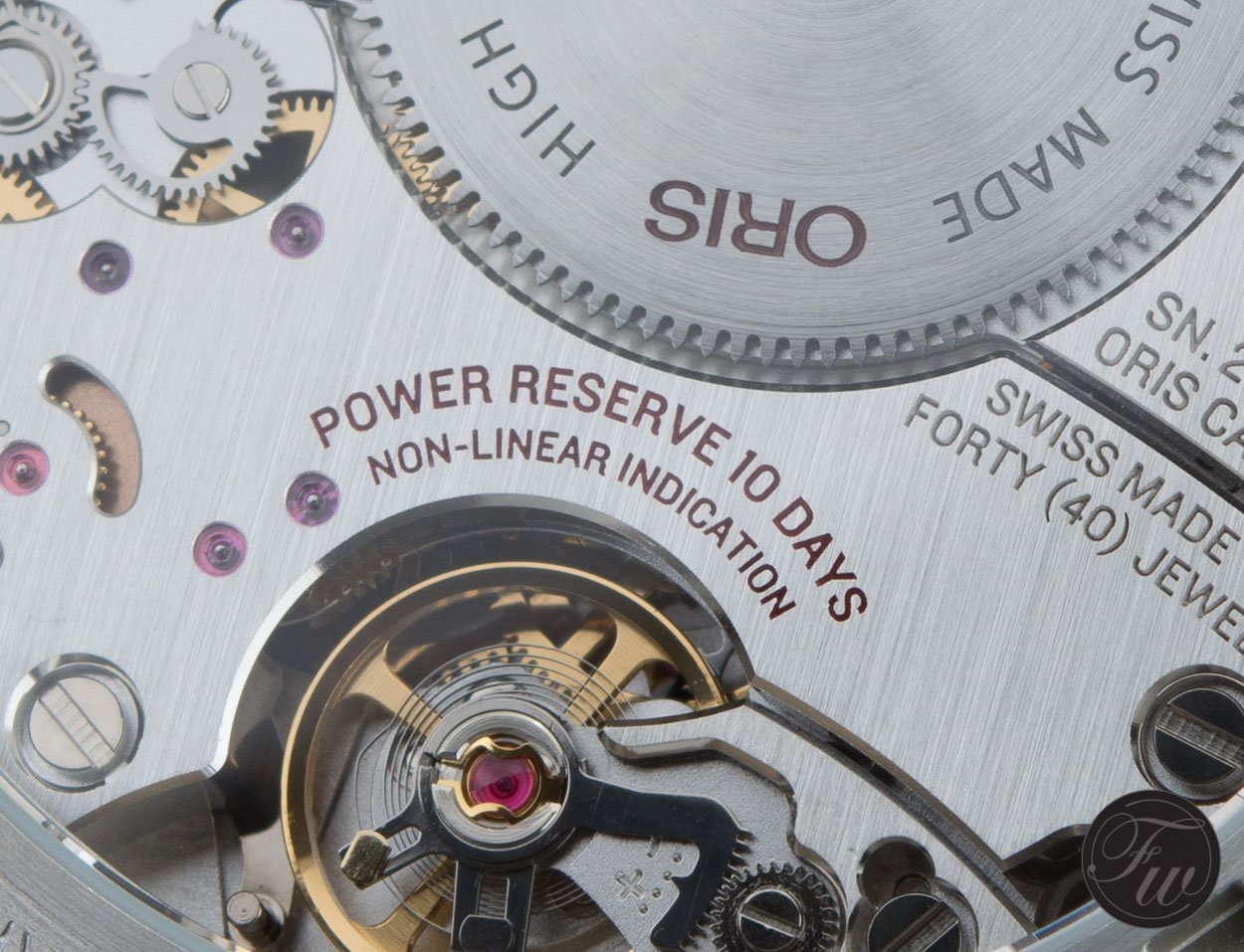 The movement shows its huge barrel that enables the 10 days of power reserve. There isn’t much more to see, as the large bridges cover almost the entire movement. Leaving only a part open for the balance-wheel to be seen. Again, on the movement’s bridges we can read that it is a 10 day power reserve movement, the number of jewels and two times that we are looking at Calibre 111 here. The bezel of the case back indicates some other specifications on water resistance (10 bar), its crystal, reference number, model name and its serial number. Just like the regular bezel, the one on of the case back has the same knurled motif. As you can see on the photo, the case back is a screw-down type. I love the huge (34mm) diameter of the movement, that perfectly fits the 44mm case. The watch has no less than 40 jewels and ticks at 21,600vph. The movement has a nice industrial look to it, with a matching brushed finish. 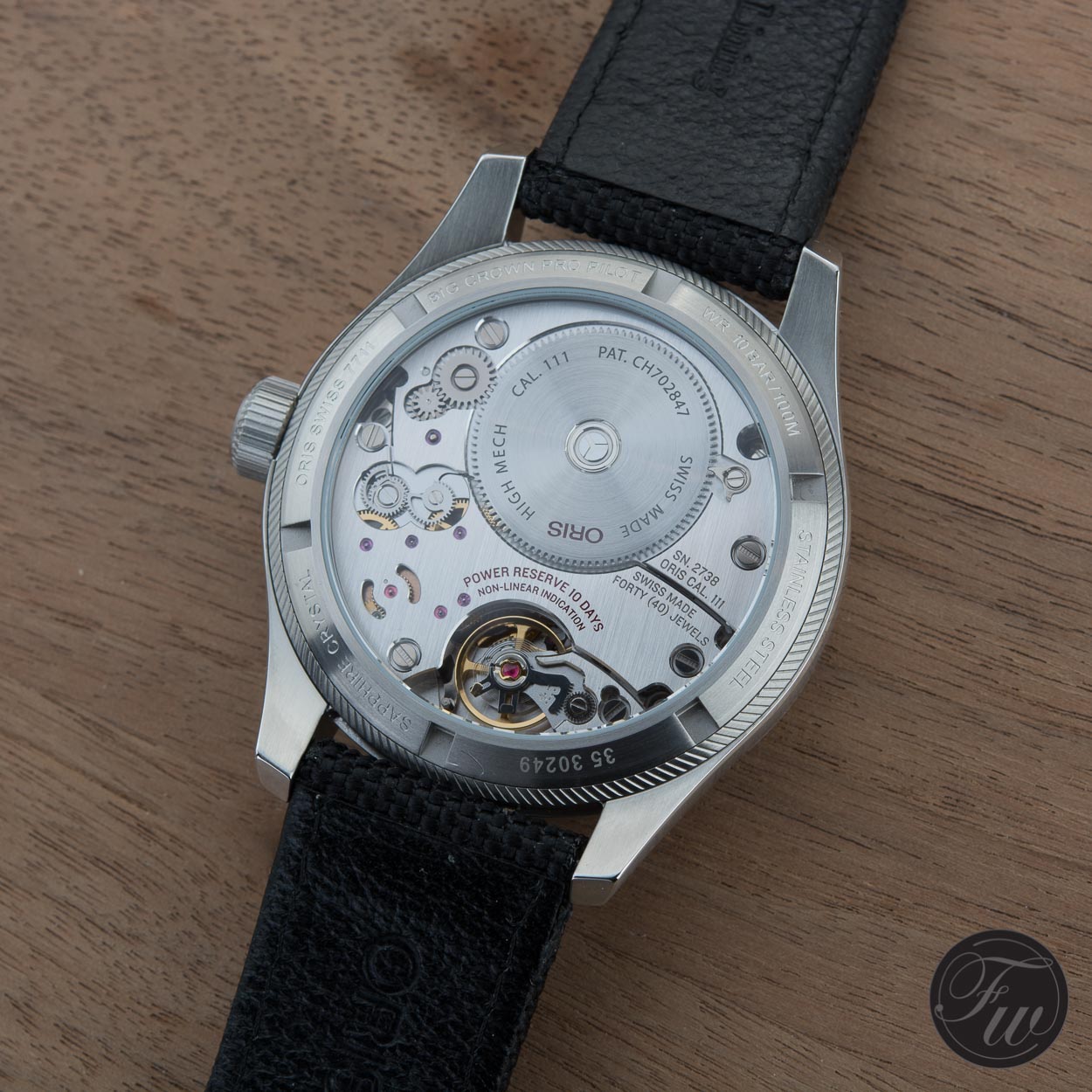 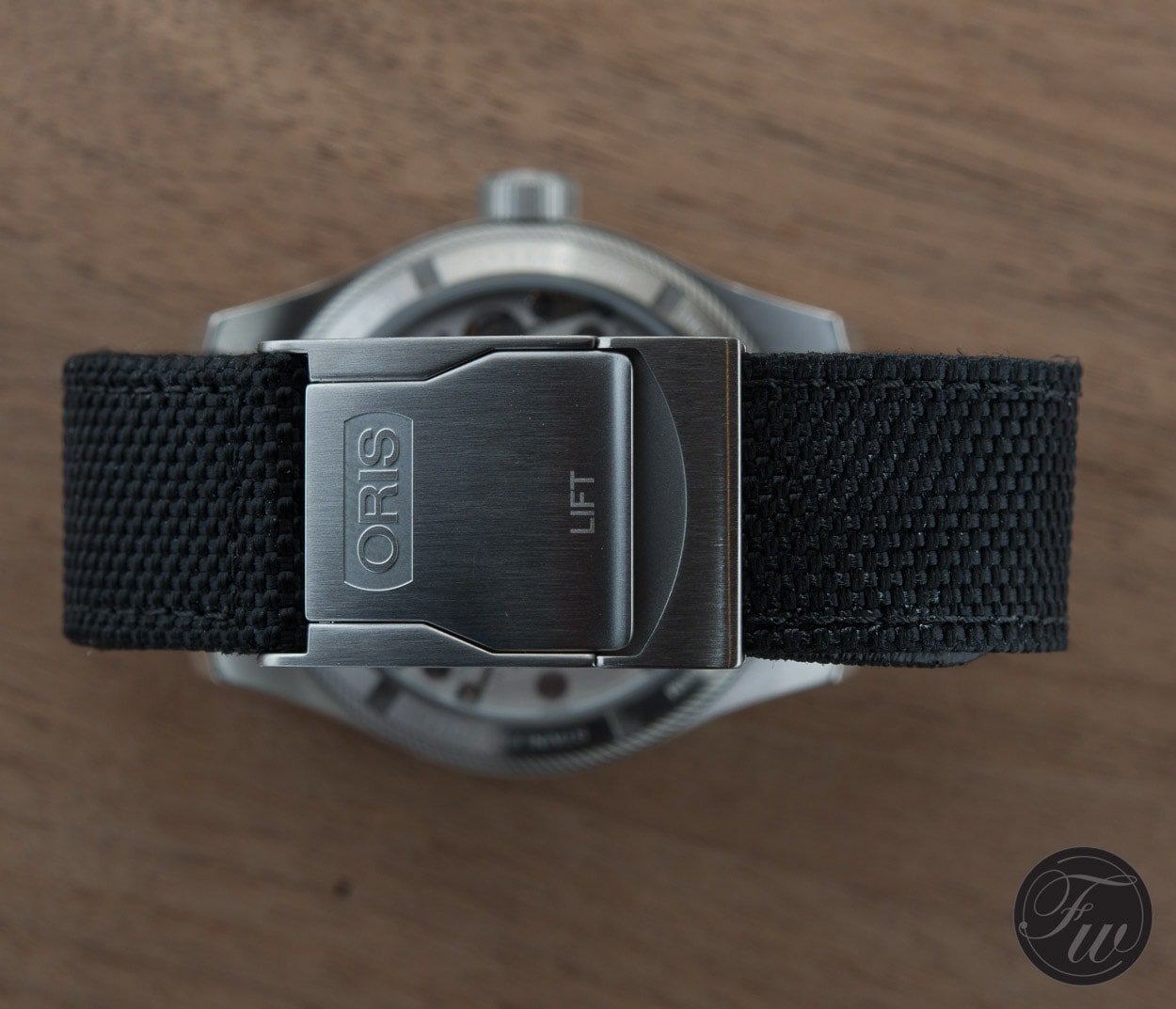 The textile strap comes on a folding clasp, as can bee seen on the photo. You have to lift the small lid to unlock and open the clasp. The strap can be easily resized, by opening the lid on the short part of the clasp. This way, the long end of the strap can be easily resized. The long end of the strap makes a loop inside the clasp, much like the Cartier straps do. In the end, I am not sure if this influences the durability of the strap (especially in the case of the alligator one), but it surely is easy to shorten or enlarge the strap without having to use all sorts of tools. A leather lining gives a nice touch and feel of the textile strap. The clasp is signed with ‘Oris’.

The Oris Big Crown ProPilot Calibre 111 reference 01 111 7711 4165 has a lot of wrist presence, especially with the deep blue dial and large white Arabic numerals and little red accents. The knurled bezel on the 44mm case also chime in to give it this presence of course. The watch looks and feels very solid, it breathes quality. The Super-LumiNova is applied to the numerals, indexes and hour and minute hand, and does its job perfectly in low-light conditions. Fully winding the watch took a long time (and 217 turns), but a 10 days power reserve is about 4-5x the normal amount you will get with a watch. Operating the crown is easy and the crown has good dimension. It is big (hence the name), but not overly ‘present’ on the watch becoming an obstacle. 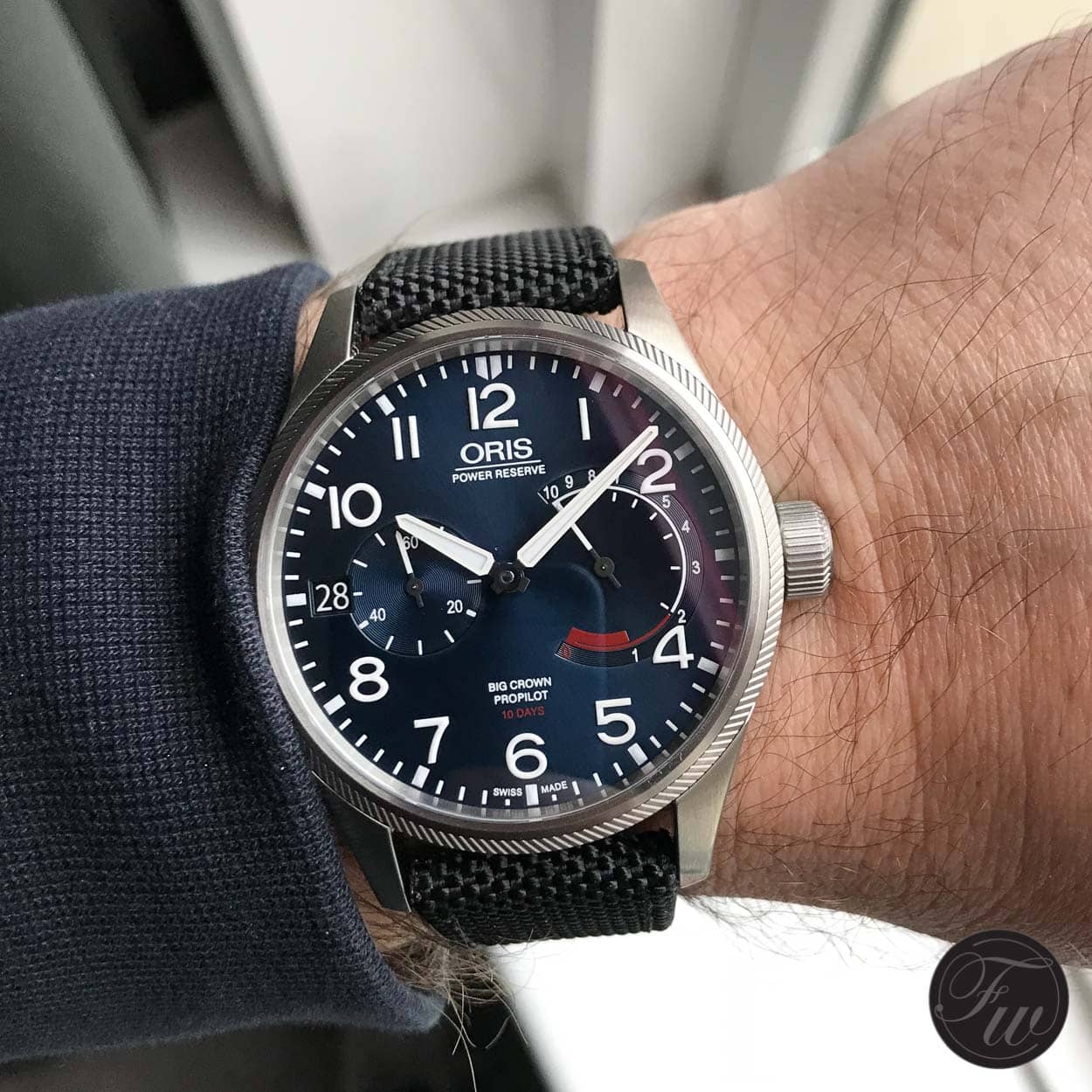 The packaging is simple yet effective. Nobody needs 50cm x 30cm x 20cm boxes in the attic or on a shelf somewhere. The booklet is generic and sufficient, but it would have been nice to get something special with this watch (given the price and the special movement). A three-year warranty (including the extension that is being offered) shows that Oris puts a lot of trust in their watches and I have no reason to doubt it either. A well-built large pilot’s watch with a manufacture movement for a very fair price. I think that this sums it up pretty nicely.

More information can be found via Oris on-line.