The first time I strapped on the Fortis Flieger Midnight Blue was moments before I hopped into the cockpit of the Turbine Legend plane for a private whizz around the Swiss alps (what a job, eh?). I’d begun the day wearing my prized Czapek Antarctique Viridian Green, but felt that my airborne adventure, courtesy of Fortis Ambassador and local legend Marc Rollier, required a different character strapped to my wrist. I swapped with Banu Biret of Fortis for the rest of the day and thus began a memorable flirtation above the clouds (with the watch; I continued my flirtation with Banu when I returned to Earth). Now, that same stunner is available on the eye-catching block bracelet. I caught up with the Fortis Flieger once again to see how the update suits it.

There are a couple of industry-standard terms for the “ultimate” watches in your collection. “Grail Watch” has filtered into common parlance and “Exit Watch” is a term more and more people are coming around to. However, what should we call a watch that doesn’t mark the beginning nor the end of your journey, but rather serves to unlock a whole new world of possibilities that you’d never before considered? Let’s save “Entry” or “Genesis” for true neophyte collectors. How about “Key”, “Legend”, or “Keystone” to define a watch that rolls out the red carpet to a wholly unexplored area of the industry, be that a type of watch or a brand in its entirety. 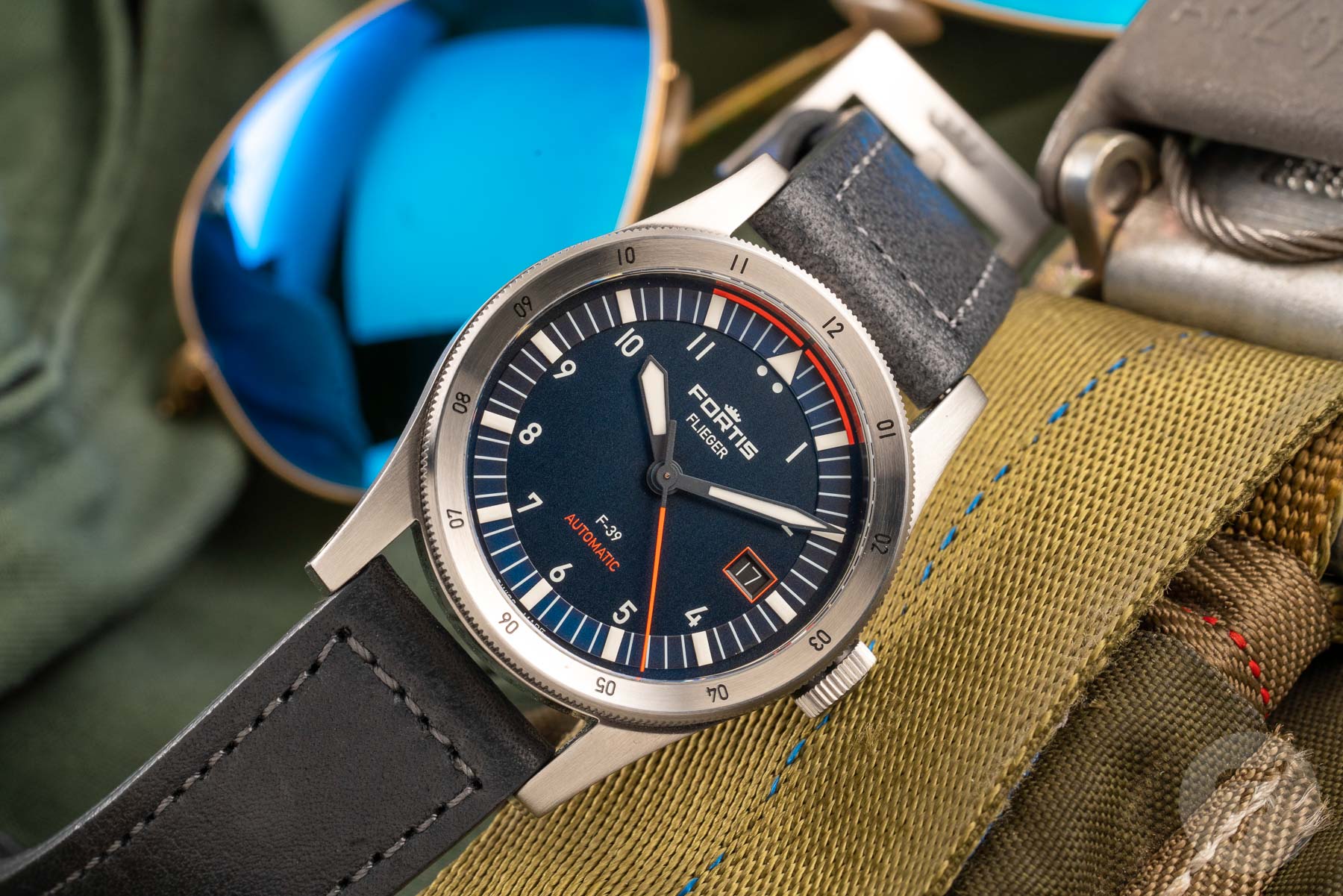 A brand worthy of exploration

Fortis was a brand I’d had a decent relationship with even before my first encounter with the Flieger F-39 in midnight blue (first presented to me on a gray leather strap). However, it was not a brand I’d seriously considered buying from, simply because I hadn’t found my lane within it. The Fortis Flieger F-39 would not ultimately be the first Fortis I added to my collection (as you well know by now, that was the Marinemaster M-40 Snow White I reviewed recently here). However, it was the model that made me realize Fortis could be a brand for me if only I gave it a bit more of a chance. 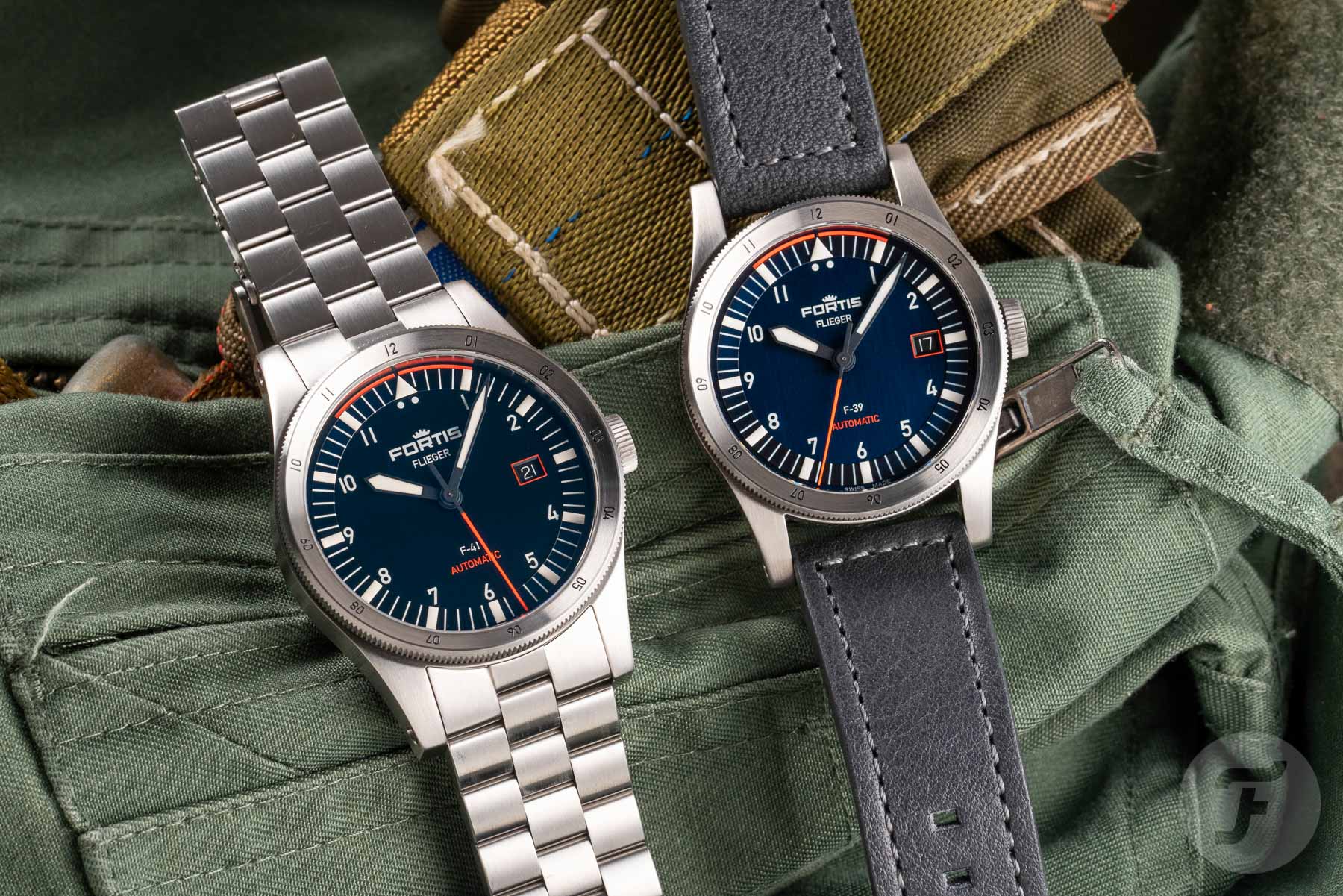 A chance worth giving

I guess, if you’re a regular reader of Fratello and a follower of mine and my team’s exploits around the globe, you will remember that we’ve had some pretty wild times with the Fortis crew thus far and those times look set to become even wilder as our relationship deepens. Last November, Dave Sergeant and I accompanied the Fortis team to Esrange in northern Sweden, 145km north of the Arctic Circle to assist in and observe the testing of 13 chronograph movements in the challenging conditions of the Earth’s stratosphere. It was there that I wore and fell in love with the Marinemaster M-40 and there that I decided to join the Fortis family. That decision had its roots in the remarkable day I spent above the clouds, being flung around at 4G, with the Fortis Flieger F-39 in midnight blue as my ticking companion. 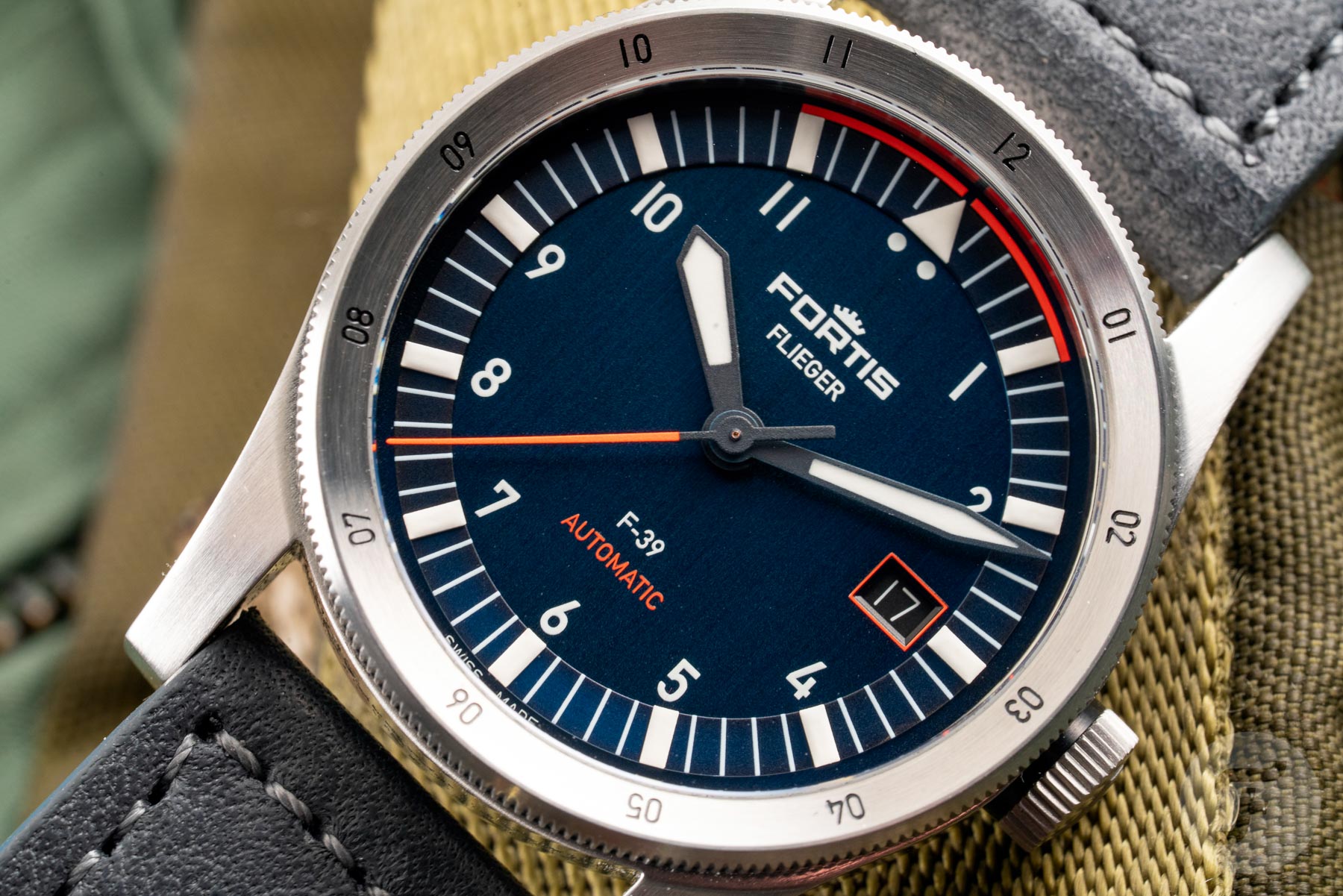 A watch for all seasons

I’d been impressed upon my first encounter with the watch by the way the deep blue sunburst dial caught passing light and made a dazzling display of it. The hot, Berlac Fluor orange seconds hand and dial accents bring an insane level of contrast to the dial irrespective of conditions. In overcast weather, the fluorescent orange is perhaps at its best, seeming to burn with an otherworldly intensity that can’t help but remind me of Sauron’s unblinking eye whenever my mind turns to adventure (which it often does in the presence of Fortis’s timepieces).

In bright sunlight, the blue background comes to life, but the orange keeps it grounded. Legibility is retained by the Berlac Fluor orange’s weird ability to separate itself from the blue’s activity and remain an unbothered island of calm. As the light fades toward the end of the day, the orange seems to cling to the last memories of high noon and almost glows (this is just an illusion that I’ve noticed before in the Laco Squad Amazonas model I own, except with green that time instead of orange). 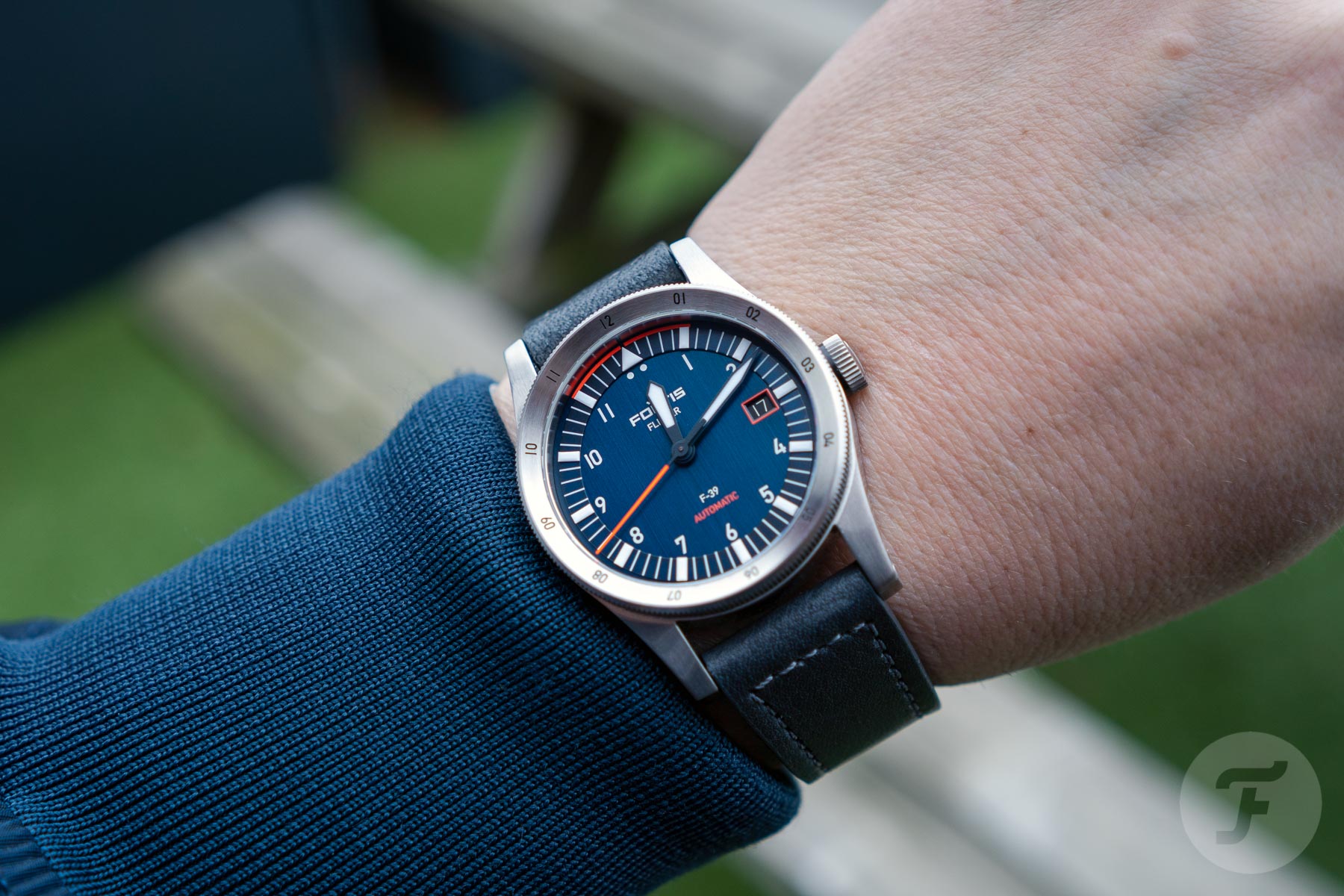 The gray skies above

As a native of northern England, I am no stranger to overcast skies. I’m also a keen kayaker. As such, I favor robust, highly legible timepieces that can work in all types of weather. I previously wore the aforementioned Laco for exactly that reason but I would gladly substitute it for the Fortis Flieger F-39 or F-41 if I had the chance. I’m hopeful that, one day, we will see a bit of Berlac Fluor orange make its way into the Marinemaster line (and if Fratello has anything to do with it, we may well see that in the not-so-distant future). Until then, however, I feel more than comfortable recommending any model in the Flieger collection for fans of outdoor adventure even if taking to a cockpit is nowhere near your list of likely pastimes. 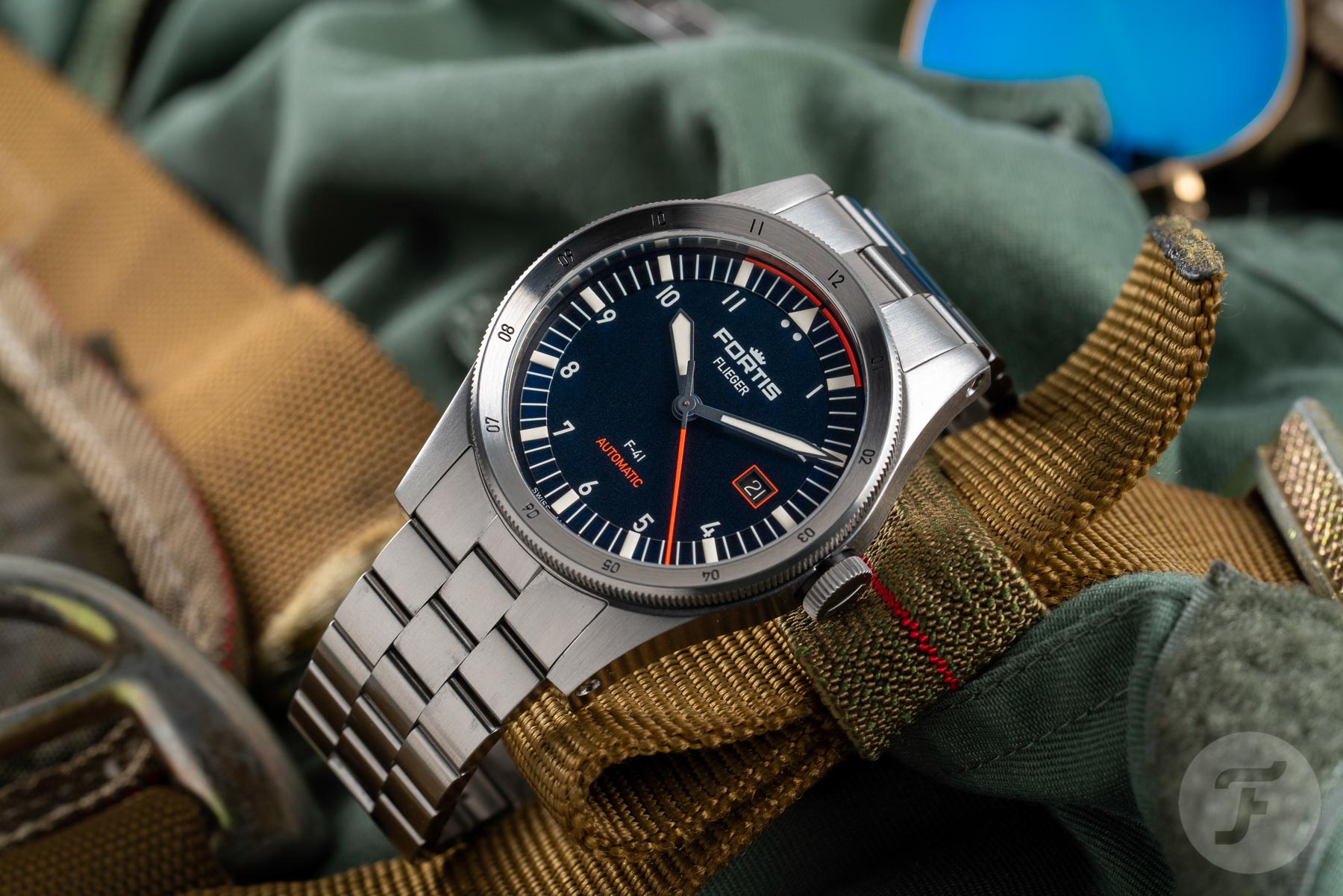 21mm to rule them all

In the images here, we have the Flieger F-39 on the strap and the F-41 on the block bracelet. I would personally wear the F-39 on the bracelet, which is possible thanks to Fortis’s highly unusual (but much-appreciated) decision to make all strap widths 21mm throughout the entire collection. Yes, that’s right: you can wear the same strap on the hulking 43mm Flieger GMT as you can on the relatively petite F-39. While 21mm is a bit of an odd size in general, here it strikes the perfect balance between the bigger and the smaller models and makes for unrivaled in-collection versatility. 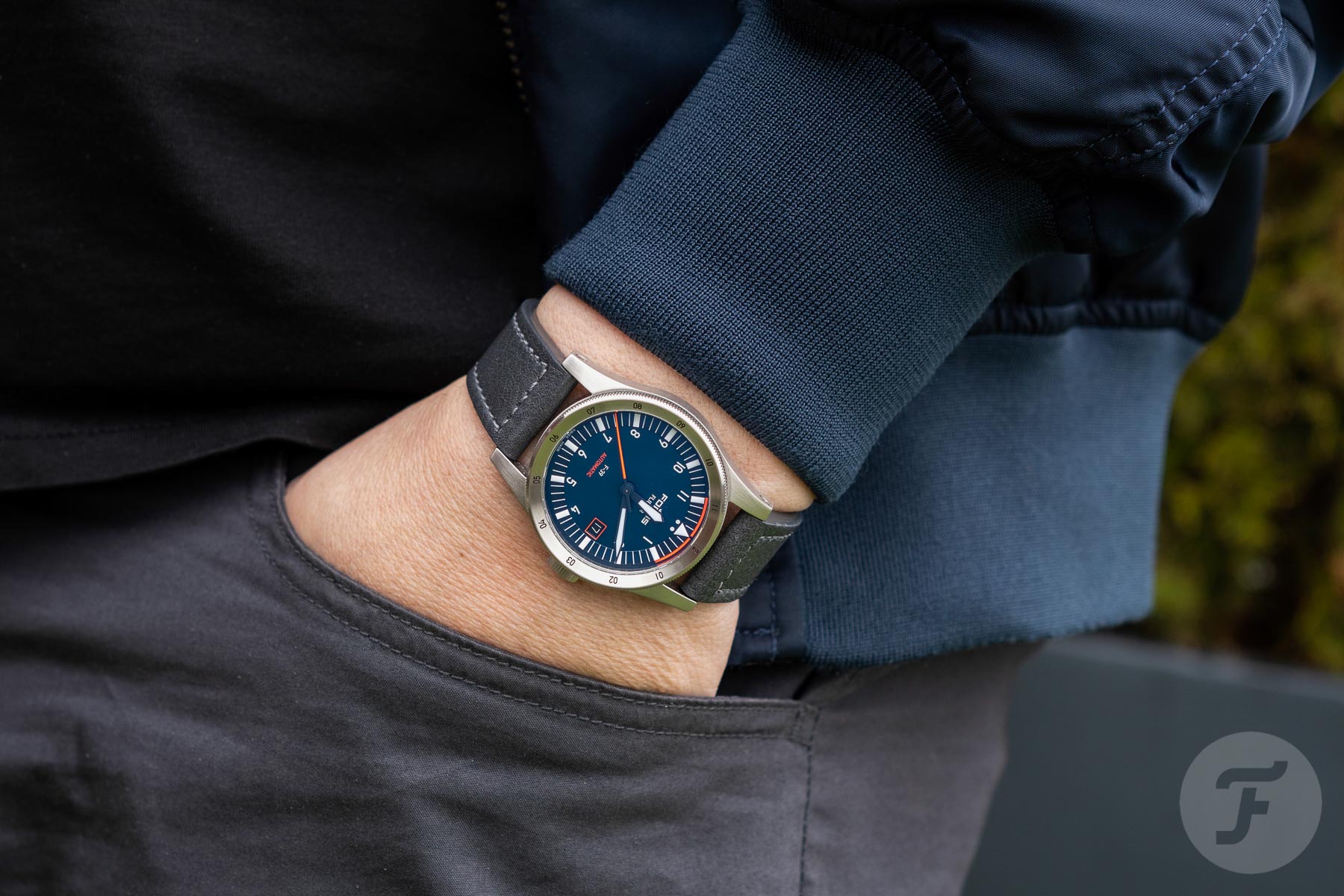 Choosing a slightly off-beat size is also a smart (if possibly design-led and unintentional) branding decision. The less-than-common lug width encourages Fortis wearers to wear their Fortis watches on Fortis straps. For a 20 or 22mm strap, this wouldn’t be the case. Automatically, the mind would skip to after-market options. Here, though, the natural train of thought leads you straight to Fortis’s accessories page where you can explore a cavalcade of modern and old-school options to find your perfect fit. Whether the designers meant for this mental pathway to be followed or not, I don’t know. I just think it’s cool that it is the natural route to take and I’m thankful the options are plentiful enough to keep the majority of customers satisfied.

Simply put, the Fortis Flieger is one of the best models of its type available. If you want a traditional Flieger layout with a little bit of modern spice, Fortis is the brand for you. I also find the Fortis logo and wordmark less distracting than I do those of most other contemporary Flieger-producing brands. The IWC logo is fine (if a bit tall and dull), but the Laco cursive script draws my eye to it in an irritating fashion more than the angular Fortis font and crown has ever done (thank goodness for Laco that the new configurator allows customers to omit the logo entirely). 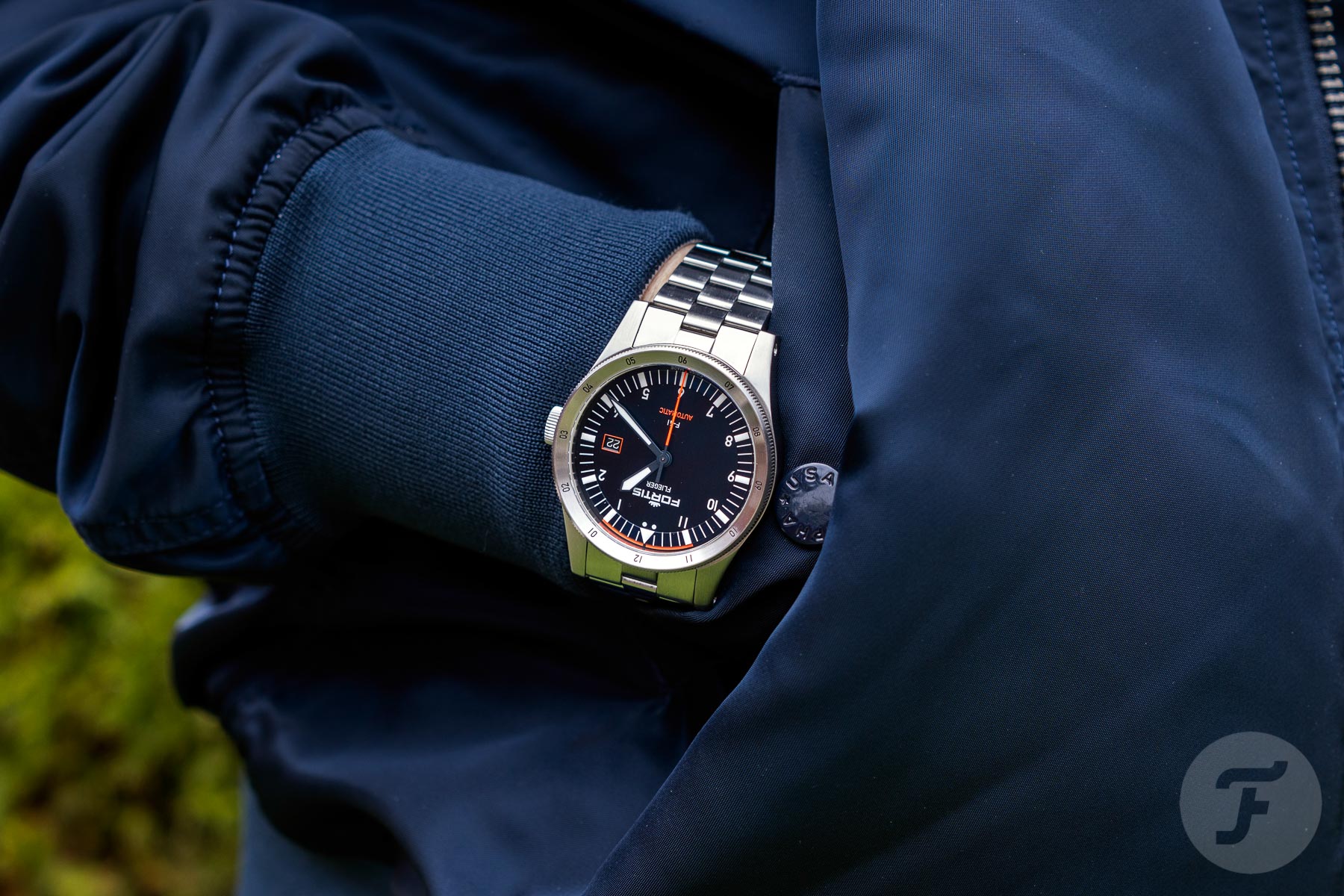 The cases of Fortis Fliegers are, again, more interesting and characterful than your standard fare. The machining and build quality are, in this price bracket, second to none, and I don’t mean that figuratively. As I said in my recent love letter to the M-40, there are watches in this industry that need to be worn to be believed. I believe these watches fit that mold exactly. If I were buying a Flieger from Fortis today, I would take the F-39 on the block bracelet and I wouldn’t think twice about it. The bracelet adds a welcome heft to proceedings but doesn’t make the watch too heavy for me (the 41mm case, however, might be a bit of a stretch for my puny child wrists). 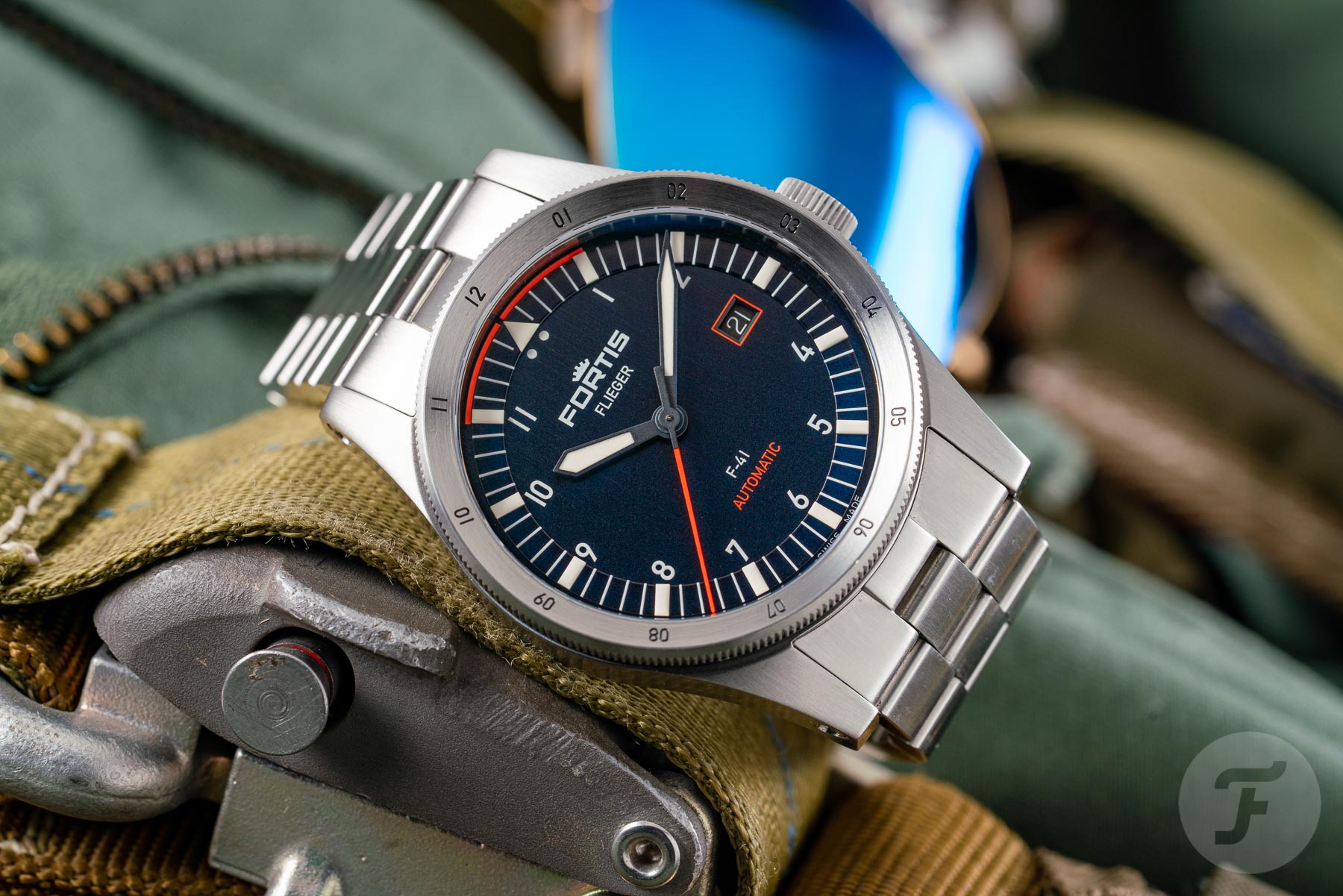 But what do you, the Fratelli, think of this and other modern Fortis models? The feedback I’ve received over the previous months seems to be consistent: there is some hesitation over the prices until the watches are seen in the metal. For that reason, I’d love to hear your initial feedback (in the comments section of this or another Fortis-focused article), and then a follow-up once you’ve had a chance to see these models in person. You can find your nearest Fortis dealer here. Let us know how you get on, which models you prefer, and what you’d like to see from the brand in the near future.