A classic watch can still teach us so much about how to innovate!
Daan de Groot
comments 19
Share

At my niece’s birthday last year, the news finally broke that I had become a total watch nerd. I finally showed my family the Instagram account I had been running for a year and a half, and they asked me about the watches I owned. I named a few, and then they looked at my wife and asked, “So, what are you wearing?” She proudly showed them her Timex Waterbury, which I got her for around €80 a few years ago. What she didn’t know was that, behind her back, I had already ordered a Cartier Tank Must Solarbeat for her 40th birthday.

I got her that Timex because she had seen an actual Rolex Datejust at one of her gym classes and told me she liked it. Back then, I told her what that watch cost — roughly €10K — and she said she’d never wear anything that expensive. The Timex was a two-tone Datejust lookalike, and she’s been wearing it with pleasure for a few years since then. But ever since I really got into watches myself, I’ve been thinking about what watch should replace it. When Cartier came out with the new Tank Must Solarbeat last year, I knew it was the one. My wife has been wearing it for a few months now, and both of us are really enjoying it! 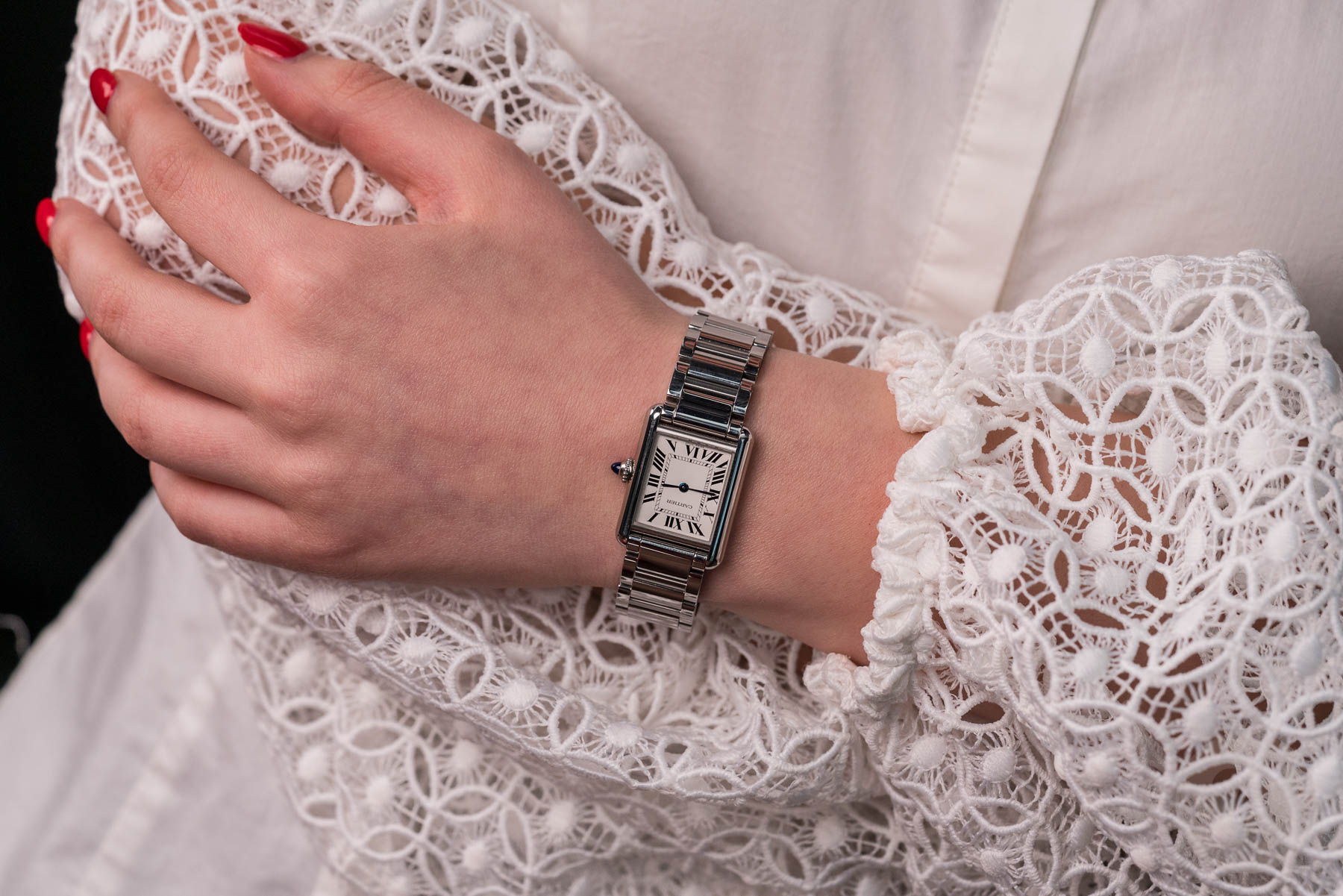 Why the Tank? Just look at it!

The Cartier Tank was actually the first watch I thought of for my wife. It’s such a simple and well-known design, yet somehow, it’s still so elegant and so interesting to look at. It’s right here on my desk now, and I can’t stop looking at it, just like when my wife has it on her wrist. First of all, there’s the unusual rectangular shape — well, unusual for a watch, that is. It’s flanked by two voluptuous sides, which are inspired, of course, by an actual tank. Then there’s the crown at 3 o’clock with that deep blue cabochon for decoration. That color continues through to the blued steel hands, and the signature Roman numerals on the dial top it all off. The Tank Must Solarbeat is oh-so-sexy, but not every Tank is equally so. 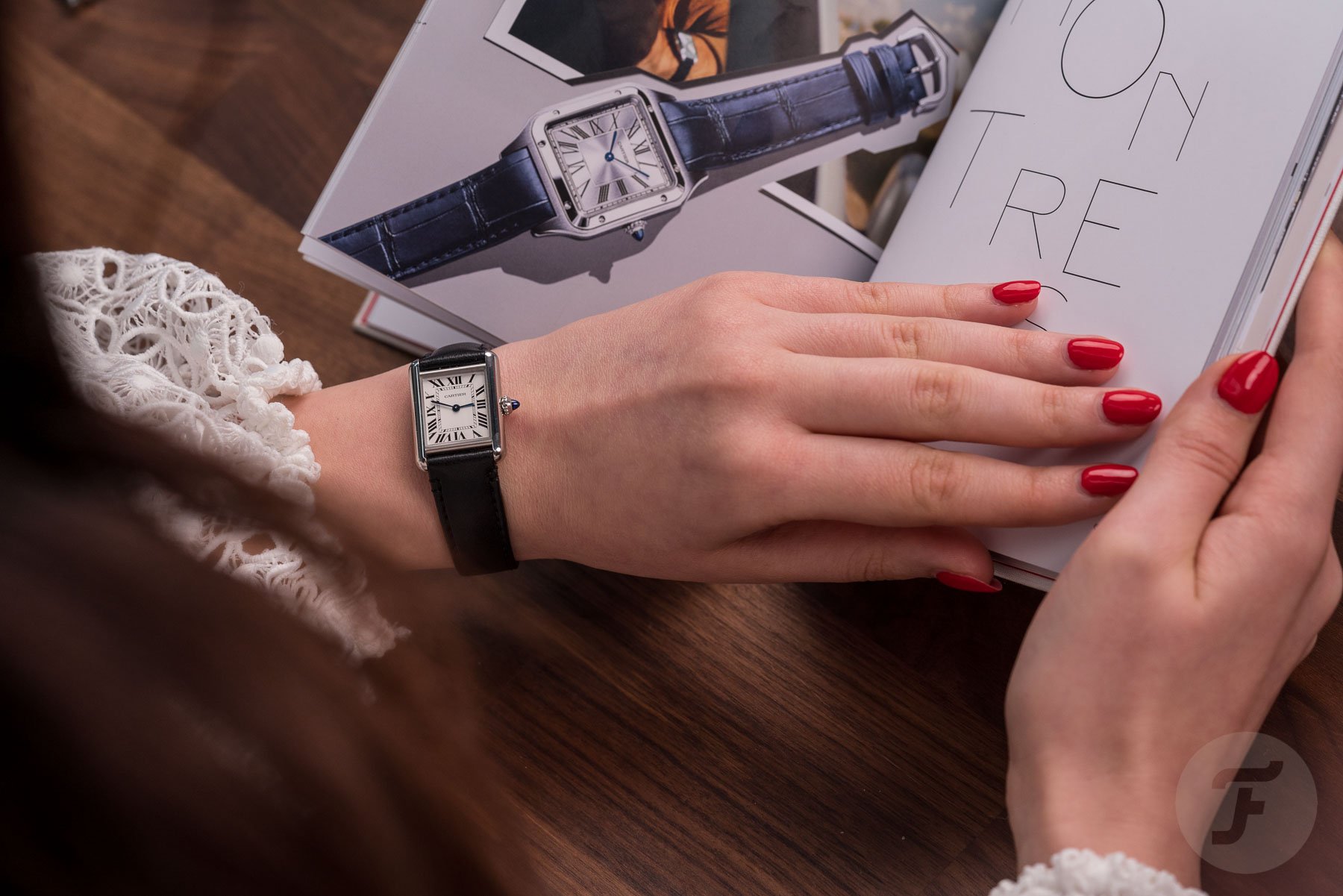 When I started the search for the right Tank, I found a lot of examples of the previous Tank Solo. Its sides are flattened and the cabochon is less pointy. I would consider it to be more of a men’s watch. My colleague Nacho owns one, and it suits him very well. But for my wife, I think the rounded sides and pointy cabochon work better. It does feel a bit more feminine overall, especially in the smaller size. Oh, by the way, I did also consider other options, like the Tudor Black Bay 36 in two-tone, for example. That would have been closer to the Timex she was wearing. And my wife also mentioned Longines to me, but I wasn’t really attracted to any of the brand’s ladies’ watches. Besides, I didn’t know whether a mechanical watch would actually suit her.

My wife’s Tank Must Solarbeat

In the end, my wife’s not really into watches at all (yet). I was afraid the winding and setting of the watch would eventually start to annoy her. She does like to wear a watch, like that Timex, but she doesn’t like to worry about it. And that’s exactly why the Tank Must Solarbeat is the perfect watch for her and many others.

Other than adjusting it for daylight saving time, she won’t have to worry about this watch for the next 16 years — the claimed lifespan of the rechargeable battery inside. Now that’s what I call luxury, especially for people (in this case, many women) who are not interested in what’s inside their watch. Many ladies just want the watch to look good and tell them the time while doing so. Well, the Cartier Tank Must Solarbeat is exactly that kind of watch! If you pay close attention, you will see the minute hand tick, but that also happens on the regular quartz Tank. And honestly, I don’t think my wife has ever noticed that. 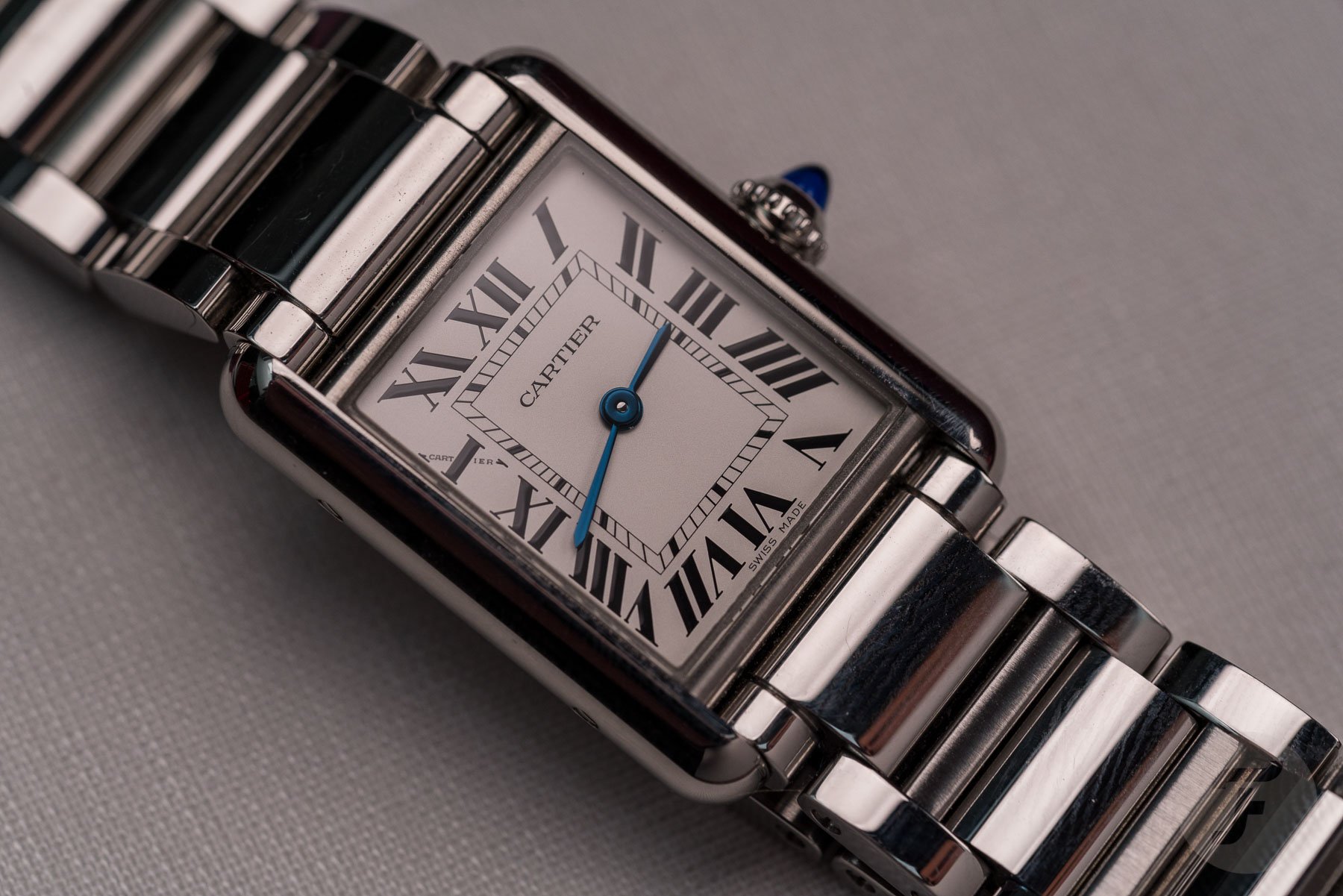 The battery is recharged through the Roman numerals. I’ve looked at them closely, and I’ve also compared them to the ones on Nacho’s Tank Solo and my own Santos Galbée. Without a loupe, I’d say you won’t notice any difference between them and the ones on a non-solar-powered Cartier.  When you do look closely, the numerals on the Tank Must Solarbeat look like they sink a little bit into the dial. In contrast, the numerals on the other two models have clearly been painted on top of the dial. Again, this is only noticeable from really close up. The numerals still beautifully reflect the light, just like on the lacquered versions. It’s admirable to see how Cartier was able to ingeniously integrate the solar function into the Tank. But that’s not the only innovation found on this watch.

Change your style without any tools

I also got my wife the additional steel H-link bracelet. The Tank Must Solarbeat comes standard on a vegan-leather strap, which is partly made of apple skin. This gives the watch a more classic and more formal look in my eyes. I knew my wife would like to have the bracelet as well because it makes the watch look a bit more casual. That way, it matches better with her not-so-formal style. When she does need it to look a bit dressier, she can swap the bracelet in no time for a different strap.

That’s because the updated Tank bracelet uses a new quick-release system. You’ll only need your fingernail to lift a lever on the underside of the bracelet, and that’s it. At first, it looks like there’s a regular spring bar inside, but the retractable pieces sticking out are actually another ingenious addition by Cartier. But the ingenuity doesn’t stop there. To avoid the use of tools to refit the bracelet or any other strap, Cartier has cut a tapered slot on the inside of each lug. That way, you can just lay the ends of the spring bar into the slots, push down a little, et voilà! You will still need a screwdriver to size the bracelet, but that’s less likely to happen as frequently as swapping it for a strap.

I feel like this quick-release system and those neat little slots should be features of every watch from now on. The combination of the two gets rid of all those little scratches you get when frequently changing out straps. It’s so good! Overall, I think Cartier has really hit this one out of the park. It looks like the brand actually took into account the final user experience and tried to make it as painless as possible. The Tank was already quite perfect in itself, and many would’ve argued not to change anything. But Cartier has really outdone itself with all these little changes in both design and functionality! Oh, and another place where Cartier shows great focus is on the customer experience is in its boutiques.

I ordered the Tank Solarbeat from the Cartier boutique in Paris. That way, my wife and I could celebrate her birthday on a weekend away in the City of Love. The trip wasn’t a surprise for her, but when we stopped at the Cartier boutique and I told her to go in, she was rather surprised. I had made an appointment and they were certainly expecting us. 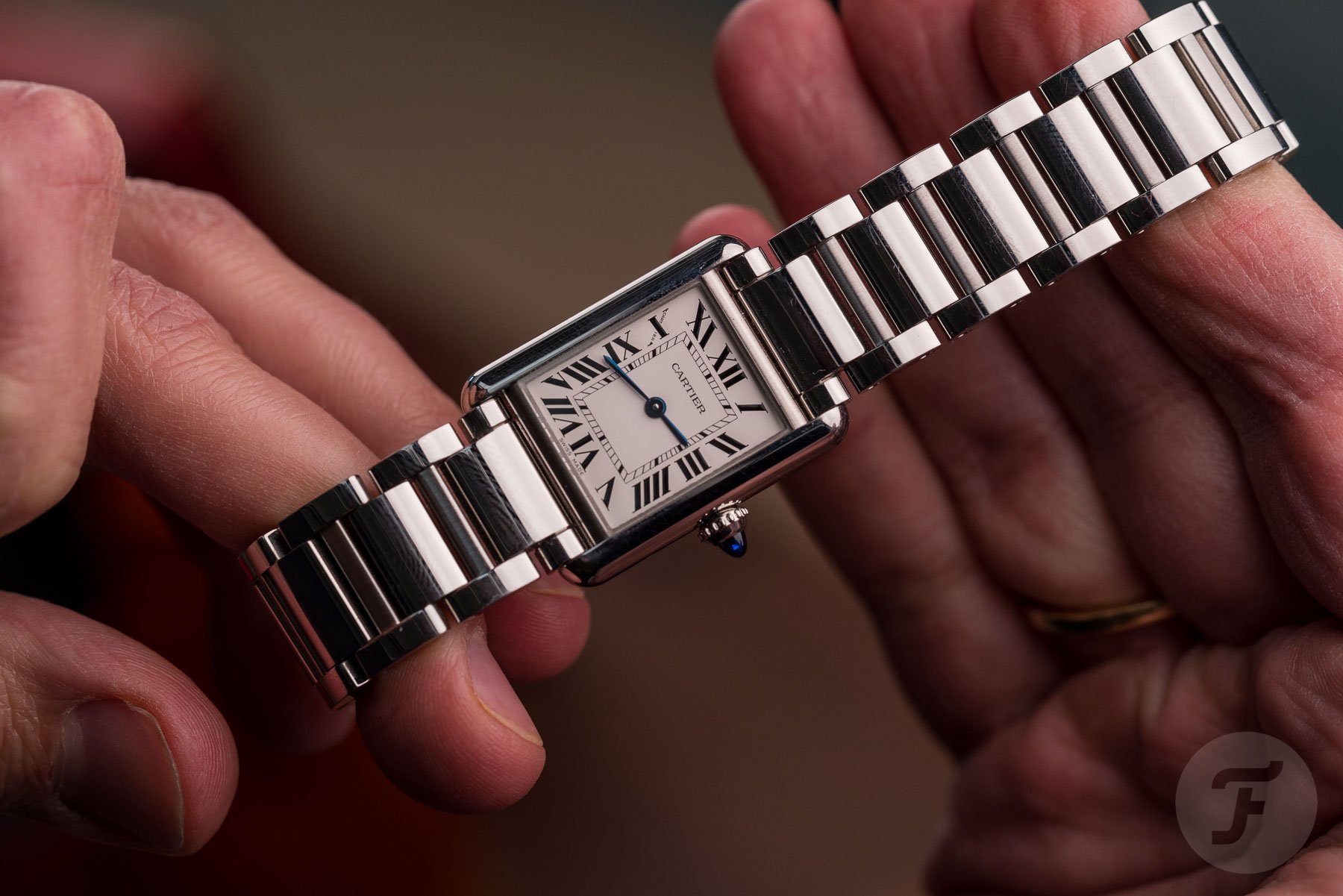 We were each welcomed with a glass of champagne, and we got a really nice history lesson on Cartier and the Tank. I think we were there for almost an hour and a half, but it didn’t feel that long at all. The staff really took the time to explain to my wife everything about the watch. Of course, they also sized it for her and showed us around the shop a little. We really felt like we were the only ones there, even though the shop was full of other customers. And just to note, I wasn’t writing for Fratello at that time, so that certainly didn’t influence our treatment at the shop. Besides, I’ve also heard from others that they had similar experiences at Cartier boutiques. Chapeau et merci, Cartier! 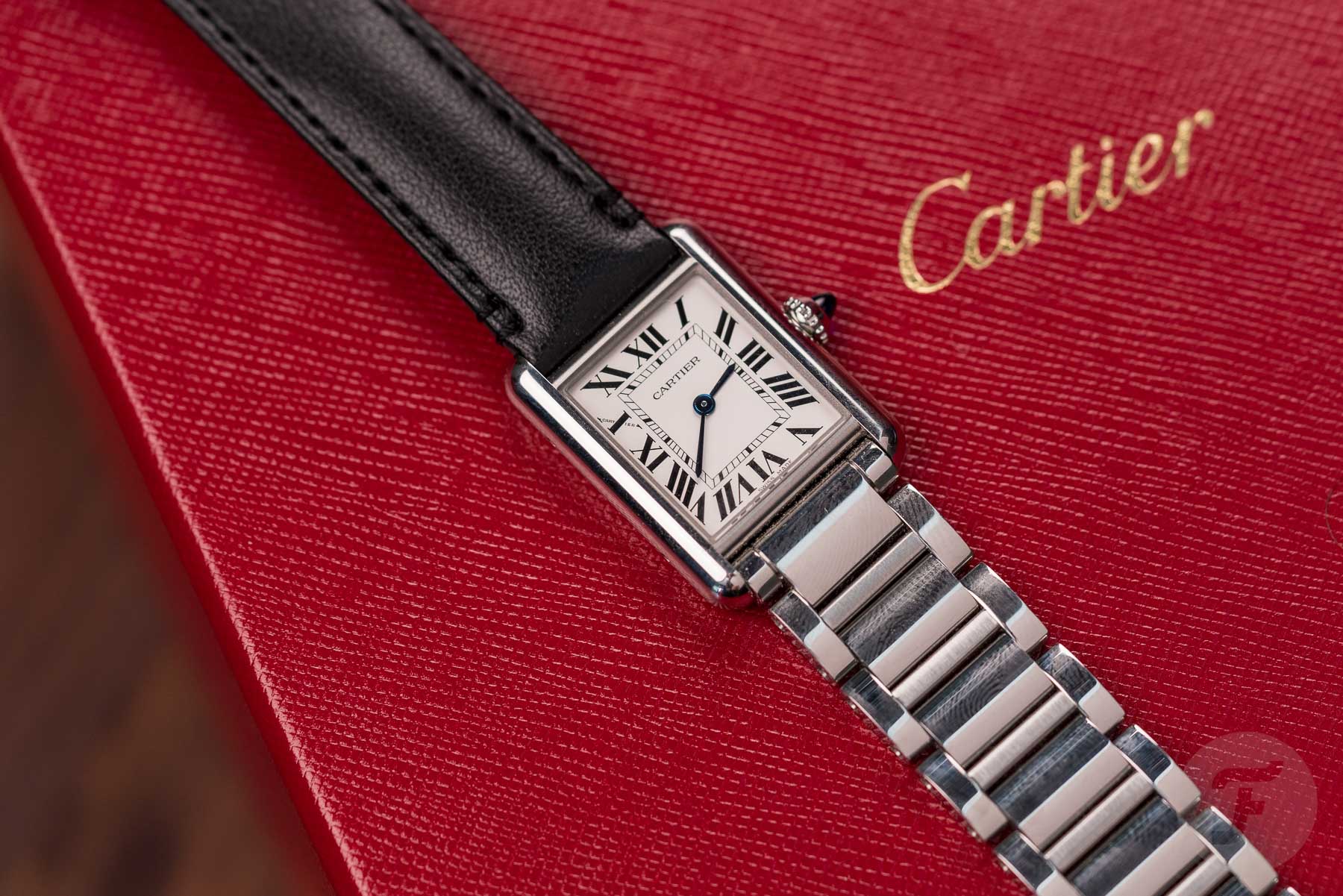 I think it’s clear by now that I’m very happy I chose the Tank Must Solarbeat as a present for my wife. But most importantly, she’s also very happy with it! It will probably be her only luxury watch for a very long time, and it looks like they make a very good match. The Tank Must Solarbeat fully proves Lex’s point of why it makes sense to add solar power to luxury quartz watches. Combined with the improved quick-release system and those slots in the lugs, Cartier has introduced a Tank that’s way ahead of its time!

What do you think of the new Cartier Tank Must Solarbeat? And have you ever gifted your loved one a luxury watch? Please tell me about it in the comments!