You might remember our photo-essay from last week on the DTM Finals with Oris and Audi Sport. The watch we are about to take a closer look is actually the piece I had on me during this visit to the legendary Hockenheim ring. It’s a pretty cool timepiece with a great size and wrist presence. So ladies and gentlemen, without further ado, please feast your eyes on the Oris Audi Sport Limited Edition II.

Oris has a long history with car racing. They have a partnership with Formula 1 team Williams since 2003 but even before that cooperation was sealed they already had an endorsement deal with F1 driver Allan McNish. Though McNish’s career was moderately successful throughout the years, Oris watches could been seen on a number of Williams drivers wrists’ such as Mark Webber and Nico Rosberg (son of Keke Rosberg, who also raced for Williams). Oris’s newest partnership with motorsport legend Audi Sport is relatively new (closed only a few years ago). This however, helped Oris to be present in another field of important motor racing region. As they are celebrating their second year together on the racetrack the company released their Oris Audi Sport Limited Edition II watch. This ?“all black everything” chronograph might seems like a redesigned color schemed version of the last years’ model but it actually is a bit more than that. So let’s look at the watch in details: 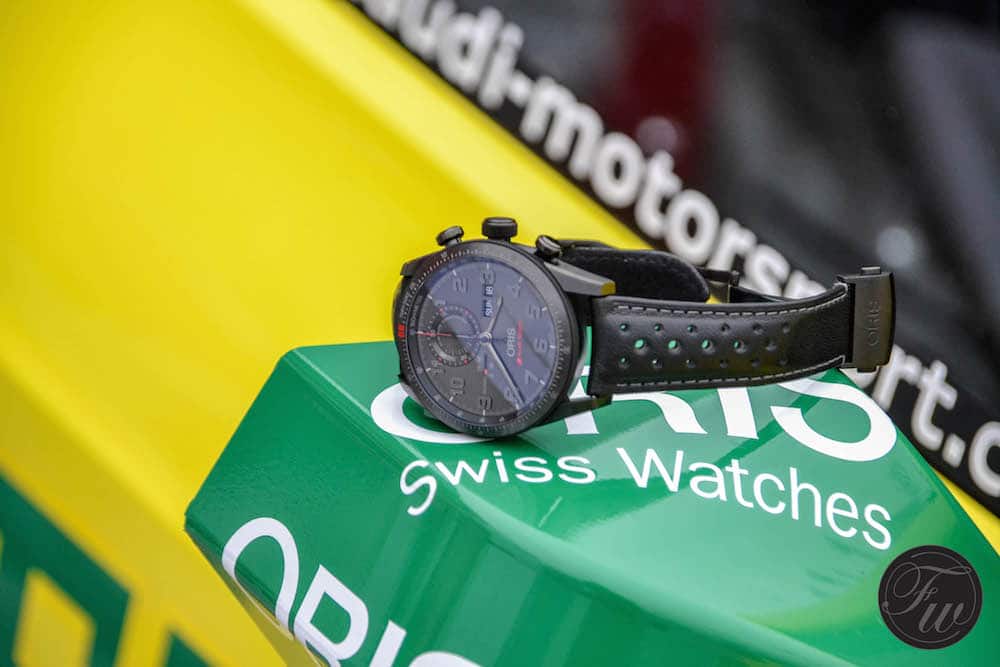 The previous version used the famous Audi grey/red color combination on the model and I have to say it looked great. Not as versatile as this one it was still a fine looking watch. Of course the first in the collaboration has to tell as much as possible from the 2 companies involved and anybody who looked at that timepiece immediately saw the obvious Audi/Oris marriage signs. For this second watch though Oris went on a different path and while they kept the major design elements of the previous version they made a bold decision of doing the majority of the watch in black. Only a very small amount of elements are in red (still connecting to the Audi color scheme) and I must say this made me worried about the time piece when I was expecting the delivery of it. This vanished when I finally opened the box and took the watch out. It is really easy to read the time, the only thing that is a bit annoying is that the crystal reflects in a way that if the sun hits it from certain angles that has an affect on the visibility of the dial. 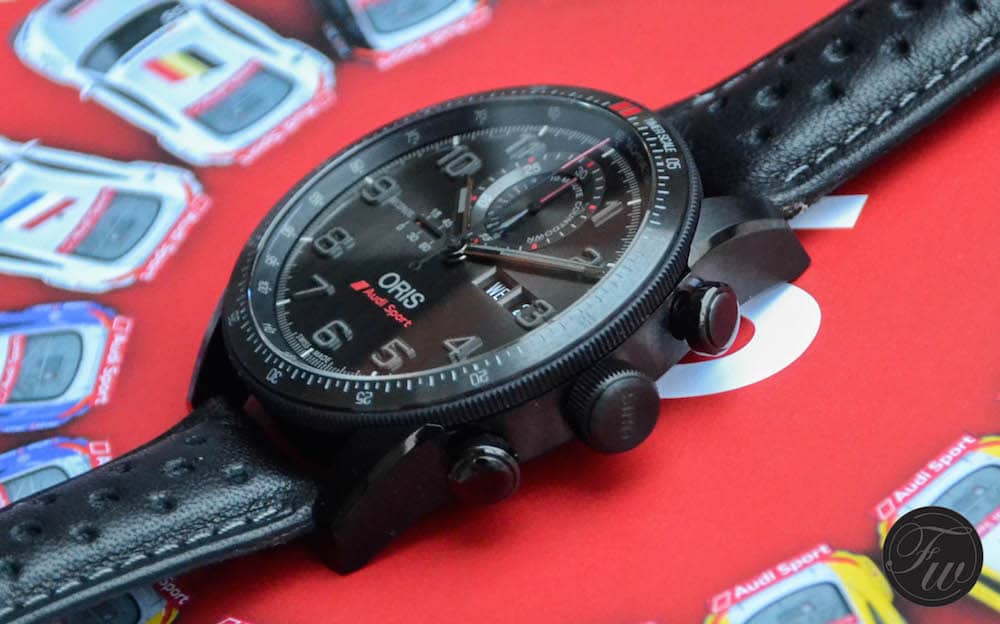 Even though some people say that black watches tend to wear smaller, this watch is clearly an exception to that rule. The Oris Audi Sport Limited Edition II is a big thing at just 44mm. It has a very slim bezel with a bi-directional Timer Scale, which leaves the dial open and makes it look huge. So even the black color way can’t make the watch look smaller. Despite being large, it is not heavy at all. This is the result of the black DLC plated titanium case and the racing type leather strap, the only strap option for this watch. I love the strap it gives a cool vintage-racing look to the Oris Audi Sport. While the inside that is very soft suede-like leather is great I’m not sure if it won’t be too warm during summer days. The 22mm strap is equipped with a DLC plated black titanium-folding clasp, something many watch companies tend to use nowadays (if you remember this Omega and even this Frederique Constant both had it) and something that I prefer over the buckle. 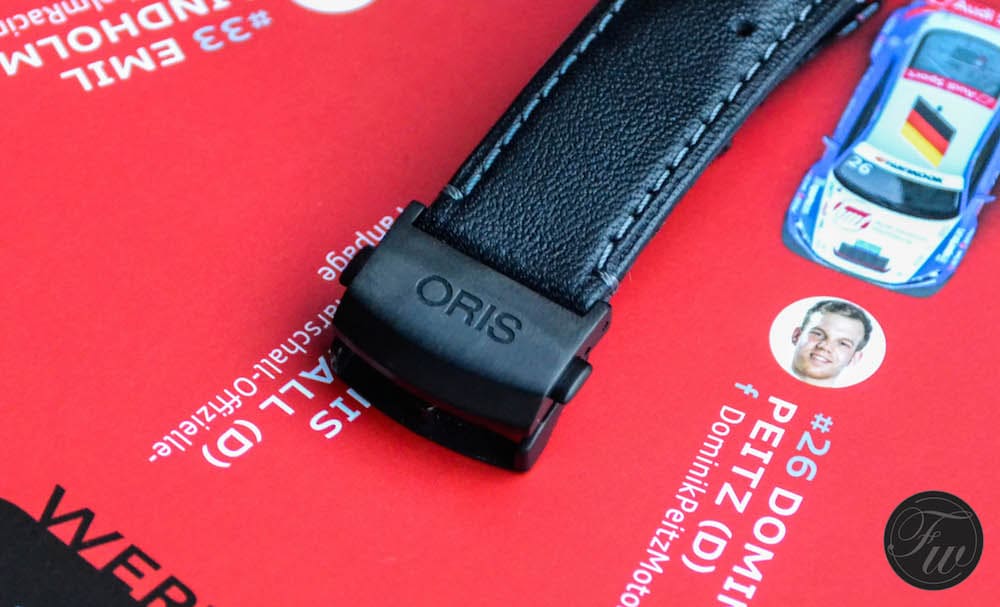 The case back is simple and clean. In the center you see the Audi Sport logo with the silhouette of the R18. The R18 is Audi’s Le Mans car and when it was introduced in 2010 it came out as a black-on-black car, clear inspiration for this color way of the Oris Audi Sport Limited Edition II. Around the center of the case back you have the usual stuff like the aforementioned name, the water resistance (10 bars or 100m) the number of the piece (watch is limited to 2000 pieces) serial and reference numbers. The crown is big (Oris BigCrown, right?) and screw-down. The lovely little racing-like details however are the flat chronograph pushers. These clearly evoke the pusher of the 70’s motor racing themed watches and stoppers. They also big enough for a driver to push them even if he already has his driving gloves on. 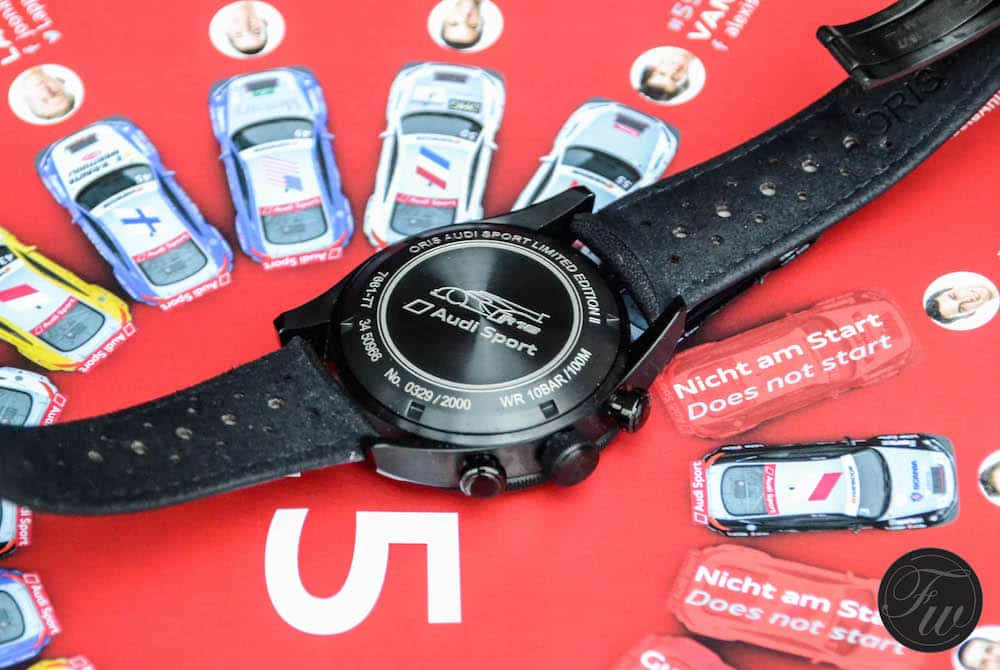 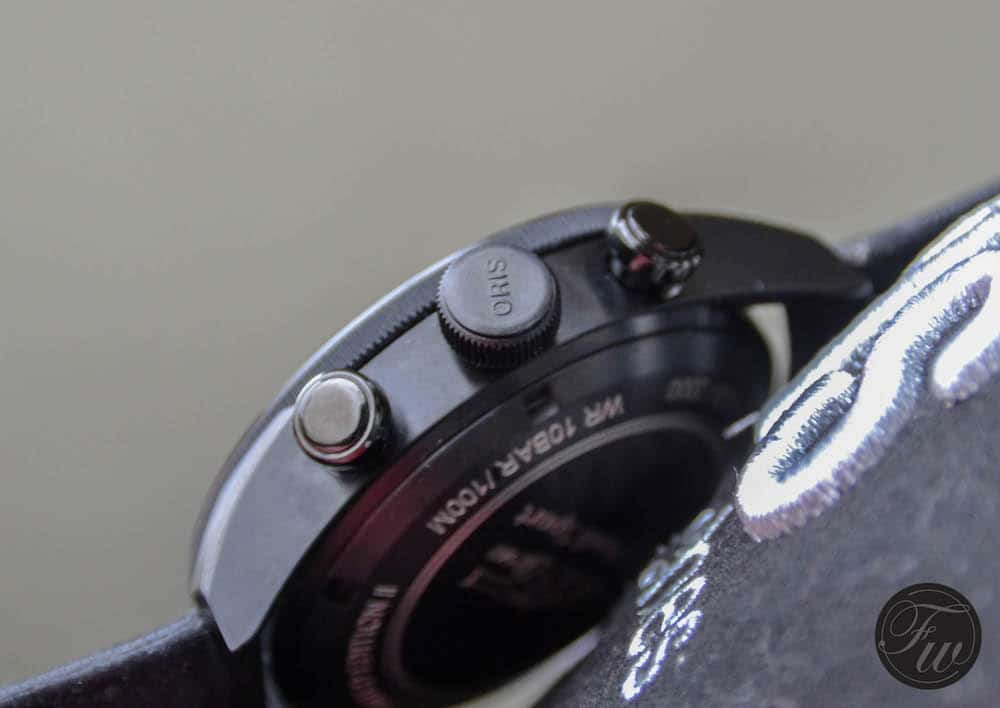 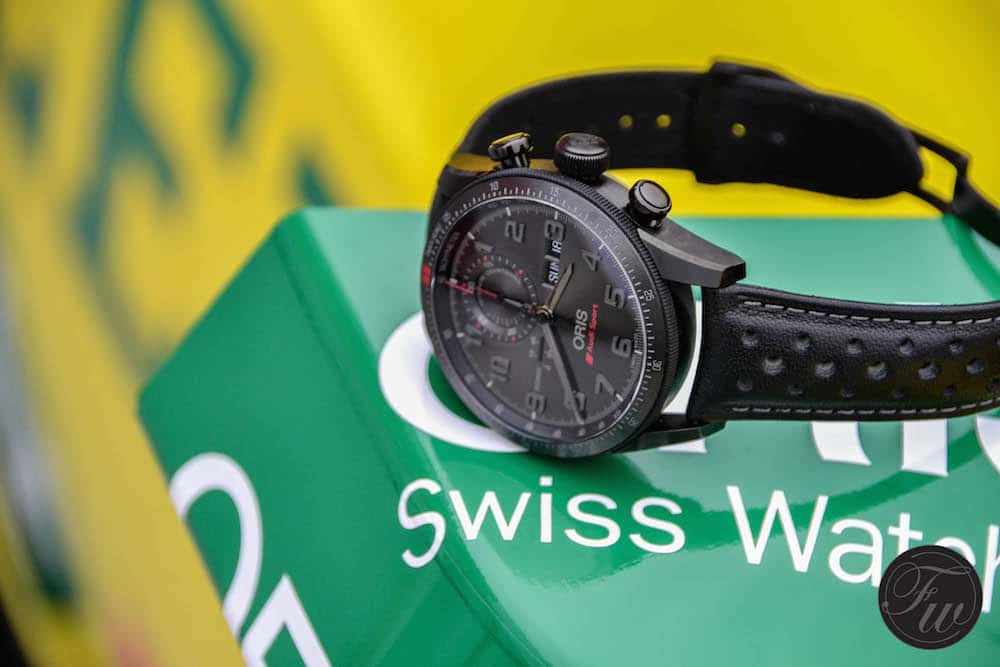 The heart and soul of the watch is the ETA/Valjoux 7750 but modified by Oris hence the caliber number Oris 778. As you know this is a workhorse day-date chronograph, self-winding with a power reserve of 48 hours when fully wound. The movement has 25 Jewels and the vibration is 28’800 A/h, 4 Hz.

I have already said a few words about the dial but let’s look at it in detail. Though it is huge, the lower side of it is quite empty, you only see Oris and the Audi Sport logo there. Everything else is from the 3-9 line up. At 3 you have the day-date indicator, white numerals on black. At 9 you find the seconds, which is not a sub dial but a linear display marked with 15-minute indexes. It’s plain black and a red line will tell you the running second. This line slowly slides towards the center of the dial and when it reaches 60 second disappears and becomes black for a few seconds before starting this process all over again. You have the usual hour, minute and chronograph hands and at 12 you will find the minute counter for the chrono function. This counter is marked with small red indexes in every 5 minutes and there is a 10-minute countdown, starting at the 15-minute marker and going up all the way to the 25-minute mark. The sub dial has a long hand that actually points in 2 directions; 30/0 and 15. So when you start the chronograph the lower part of the hand which points at 15 (also 10 in the countdown timer) will start showing the remaining time of the countdown. After 1 minute the upper side of the hand will show 1 minute as the elapsed time measured by the chronograph and the lower part will point to 9 in the secondary countdown scale showing that this is the number of minutes reaming before the countdown runs out. The dial is framed by a second inner Tachymeter bezel, painted on the rim. Every number from 1 to 12 is large, visible and coated with Super-LumiNova, just like the hour and minute hands. 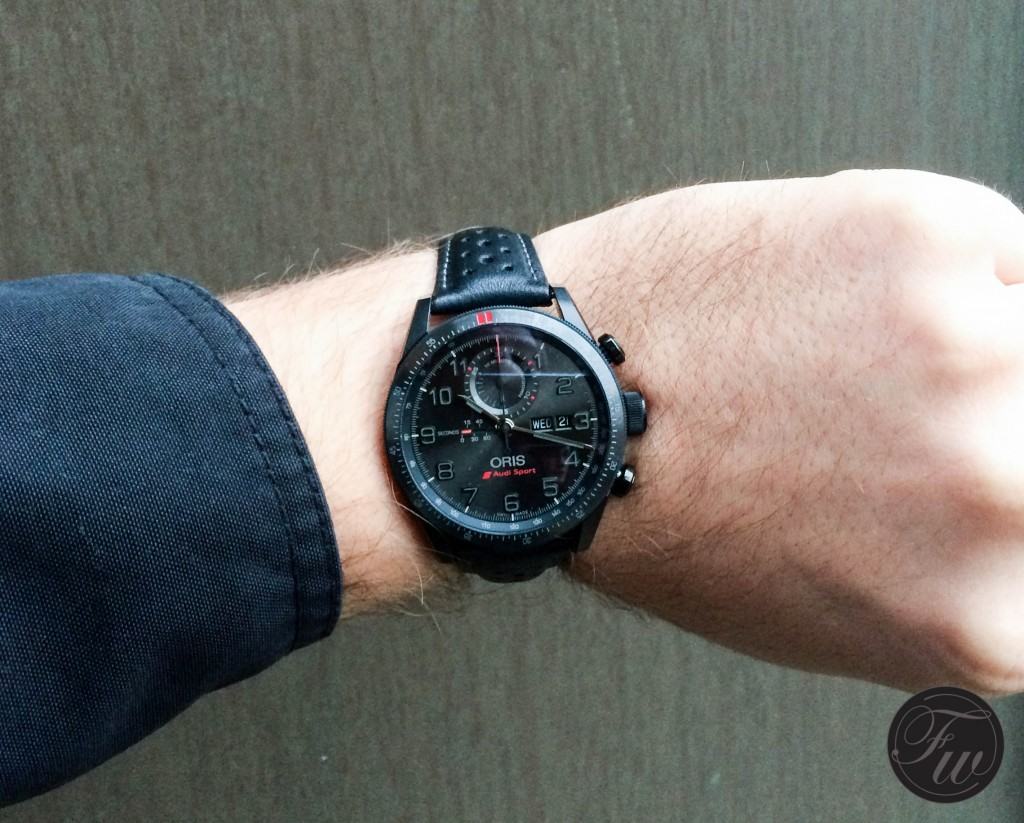 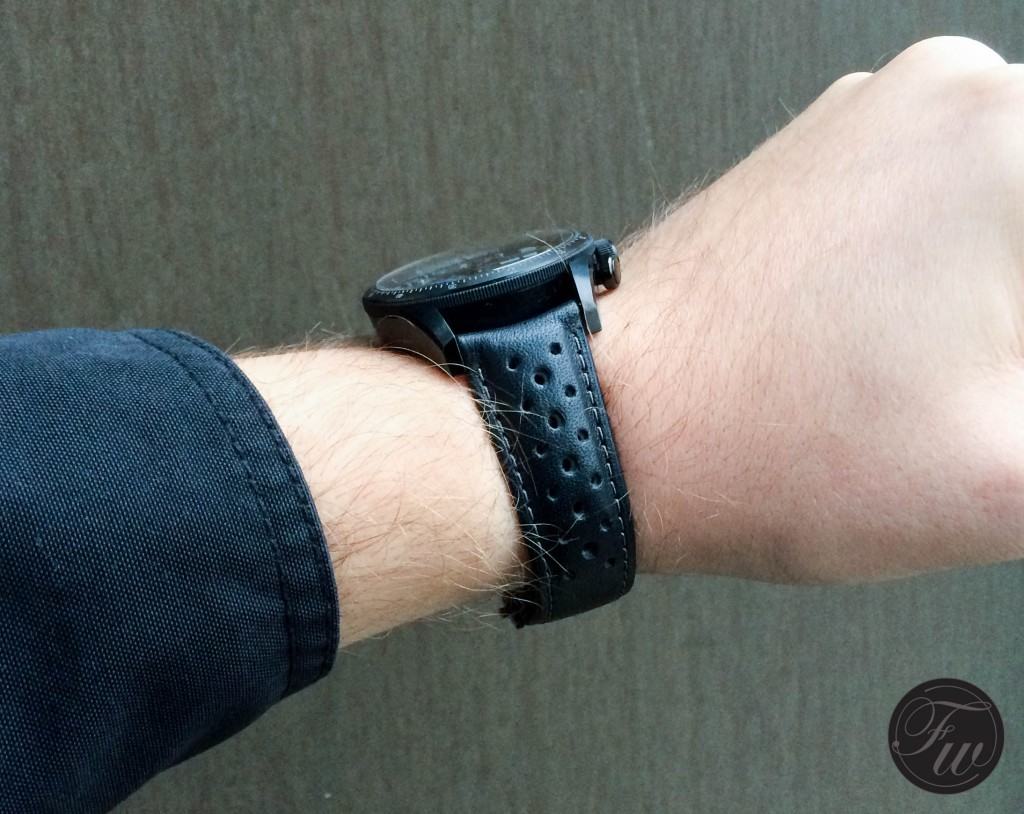 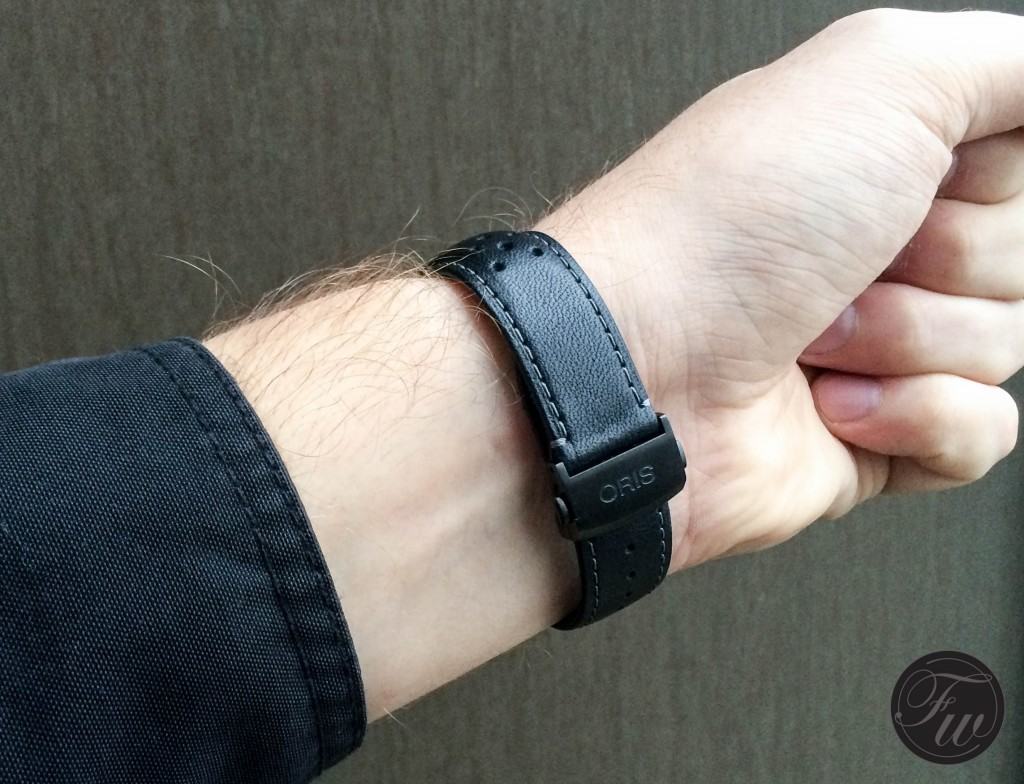 The Oris Audi Sport Limited Edition II comes in a nice black and red Oris box with a small booklet about the 2 brands. This little booklet also doubles as the certificate for the watch being limited edition of only 2000 pieces. The price for this – still independent – Swiss Made limited chronograph is set at €3800. Now it is certainly not a low price and maybe even higher than the price-range Oris usually moves in, however all the above-mentioned features justify this in my opinion. Keep in mind that there is no conglomerate company (and financial backing) behind Oris. They are independent and that clearly has an effect on costs. Oris is being operated like a family company, totally different from big corporates. It is an Oris family. So if it takes you €3800 to join them with not just any other watch but with this? Well, I think you just made the right decision.

Please check Oris’ website for more info and for the details of this watch.