Hands-On With The Oxblood Orient Kamasu

We all know that the watch world is awash with endless tales of hyperbole, obfuscation, and the occasional bits of outright misinformation. Many of us have heard the stories of watch movements being used in pricey timepieces with manufacturing or design origins not exactly living up to that which is claimed. We’ve also become all too familiar with the blatant fantasies that are often attached and presented as truth to the backstories of nascent start-ups, or “mushroom brands”, as they are sometimes known. In response to these pervasive falsehoods, the astute watch collector has adopted a cynical outlook, being ever vigilant and quick to pounce when confronted with deceptive marketing. For every darling brand and favorite model that succeeds in rising from the pack, accusations of them being overpriced, overexaggerated, underperforming, or underwhelming often seem to follow.

It’s not always easy to identify the individual elements and how they need to be blended together in order to create a magic formula, one which is capable of garnering respect from the majority of jaded watch fans. This mystical mix will naturally vary to allow for a variety of styles, individual tastes, and, of course, various price points. One thing is for certain, however: a timepiece must combine a range of features in just the right way and be offered at a price that allows a customer to feel that their money has been well spent.

And yet, occasionally, a timepiece comes along that possesses this mystical mix of factors that allows it to garner — for lack of a better term — legitimate watch cred. Fortunately, for many collectors, the Orient Kamasu may deliver on multiple fronts. 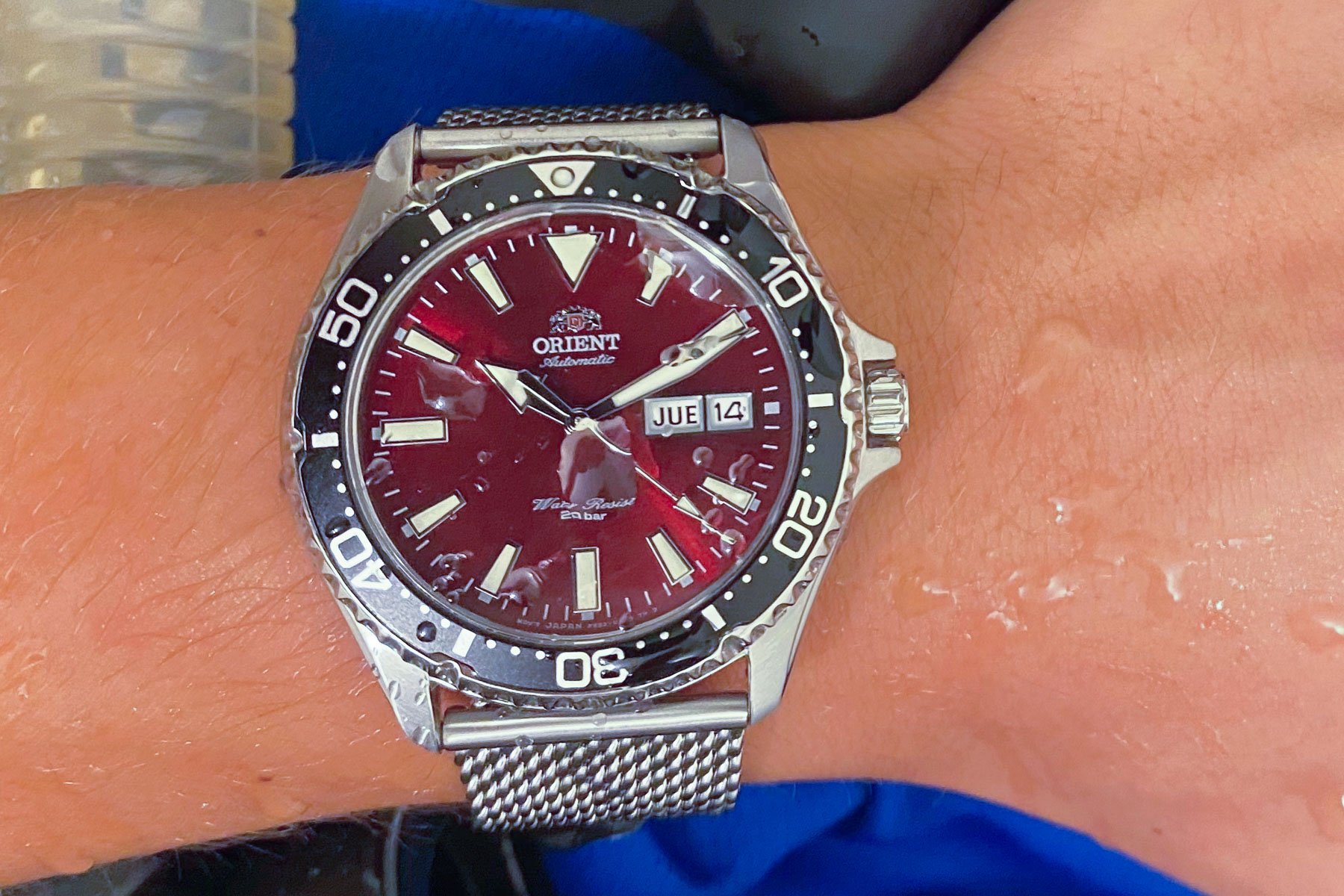 Despite being established in 1950 as an independent corporation, the Orient Watch Company has long suffered something of an identity crisis in many markets, owing perhaps to the relationship with its much more well-known cousin, Seiko. While not manufactured by Seiko, Orient exists as a partner brand, owned by Seiko Epson Corporation, and operates under the same corporate umbrella within the Seiko Group. After decades of often being relegated to the role of a forgotten stepchild, Orient watches have recently begun to slowly emerge from Seiko’s long shadow with watches like the Kamasu easily demonstrating why. 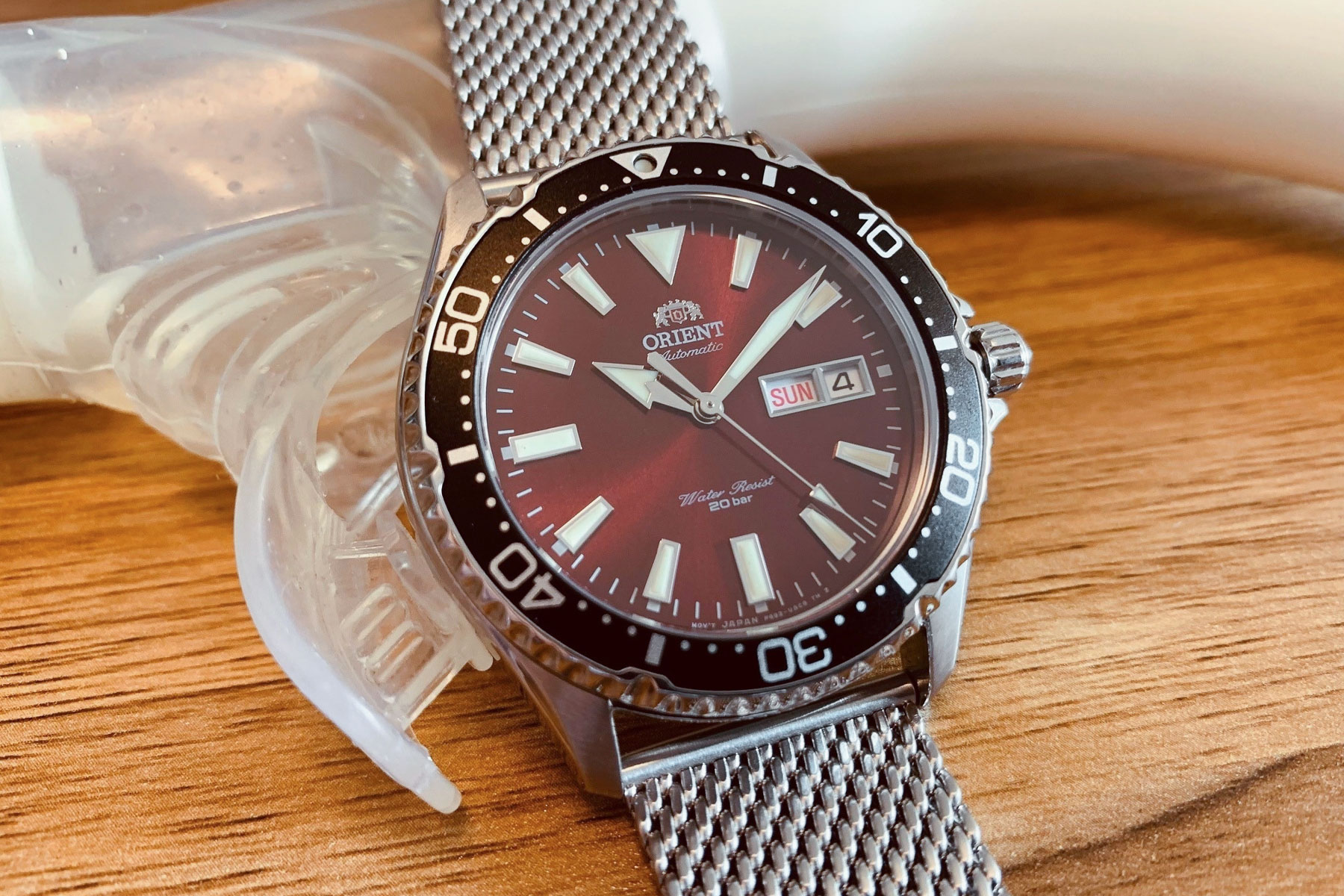 The Orient Kamasu — a fish for all seasons

Meaning “barracuda” in Japanese, the Kamasu is available in a variety of dial colors including black, blue, red, green, and black. When choosing a particular version, the red dial, even in photos, had a keen ability to always stand out. Variously described as oxblood, burgundy, or deep ruby, the sunburst dial possesses a depth and luster that can’t help but be admired regardless of the descriptor used. While the dial serves as the first element to catch the eye, there is much more to be appreciated when the wearer takes a closer look. Perhaps inspired by its jagged-toothed namesake, the Kamasu features a pointy handset and 12-o’clock marker, while the rest of the applied indices are wisely blocky so as not to overplay the motif. 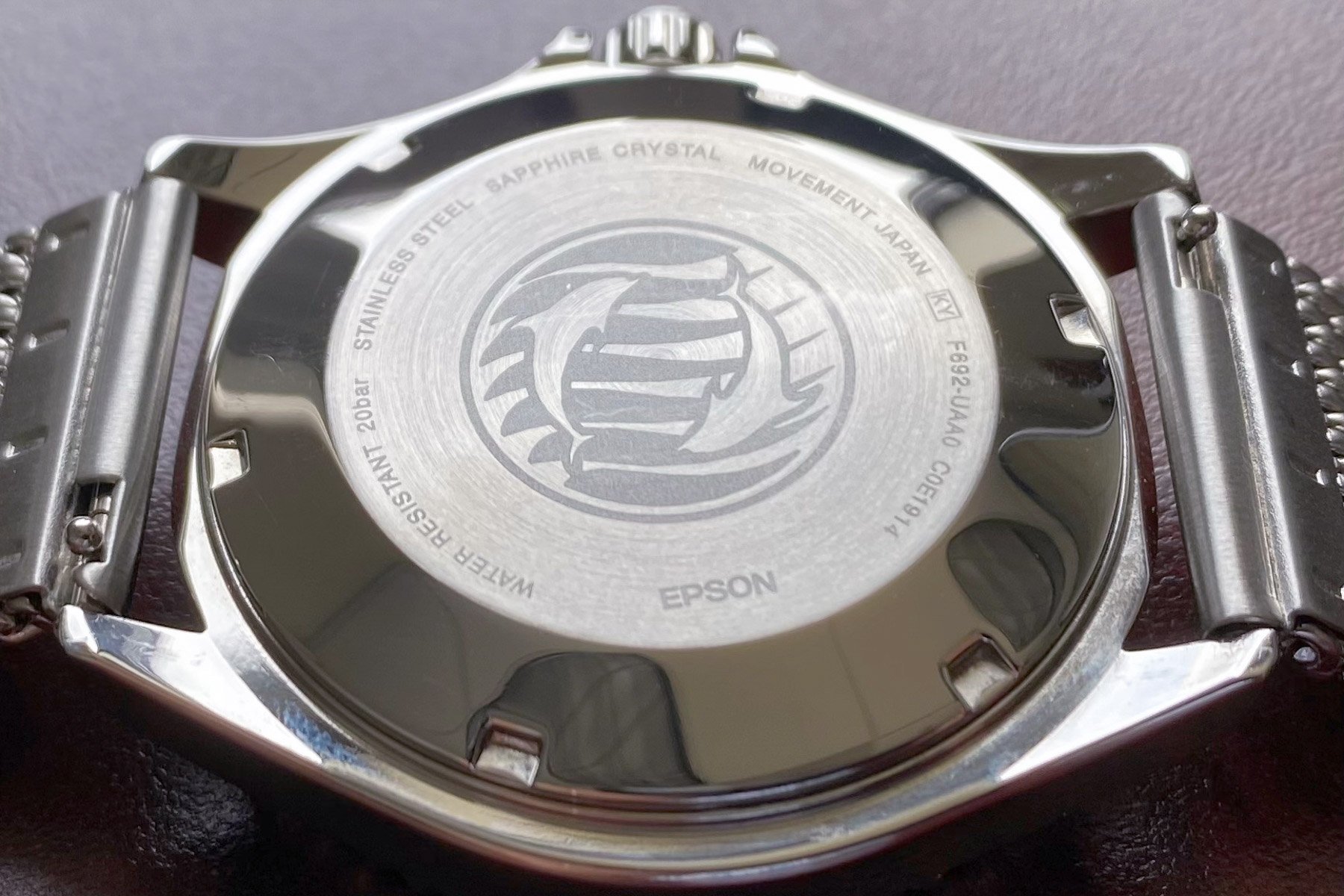 The dial also features a quick-set date complication at 3 o’clock with the separate windows thoughtfully framed by polished chrome, offering a nice touch for a watch at this price. In fact, the phrase, “nice touch for a watch at this price” seems to be a reoccurring theme when discussing the Kamasu. The solid steel case utilizes a sapphire crystal which is a welcome improvement over the mineral glass or “Hardlex” found on most comparably priced Seiko watches. Measuring 41.8mm across and 47mm lug to lug, the watch is capable of providing ample wrist presence for just about everyone except for the most ardent of hockey-puck enthusiasts. A screw-down case back and crown give the Kamasu a water resistance rating of 200 meters, making it suitable for activities ranging from vigorous hand washing to recreational scuba diving and everything in between.

Although operating as independent entities, Orient and Seiko have been known to collaborate and share technology in an effort to maximize efficiency. One such collaboration has resulted in the recently introduced caliber F6922. It represents a marked improvement over earlier Orient movements by offering both manual winding and hacking capabilities. While it’s not known if Seiko shares its luminescent technology with Orient, what is certain is that the hour markers and handset glow with an intensity and duration that could rival the very best of what Seiko has to offer. 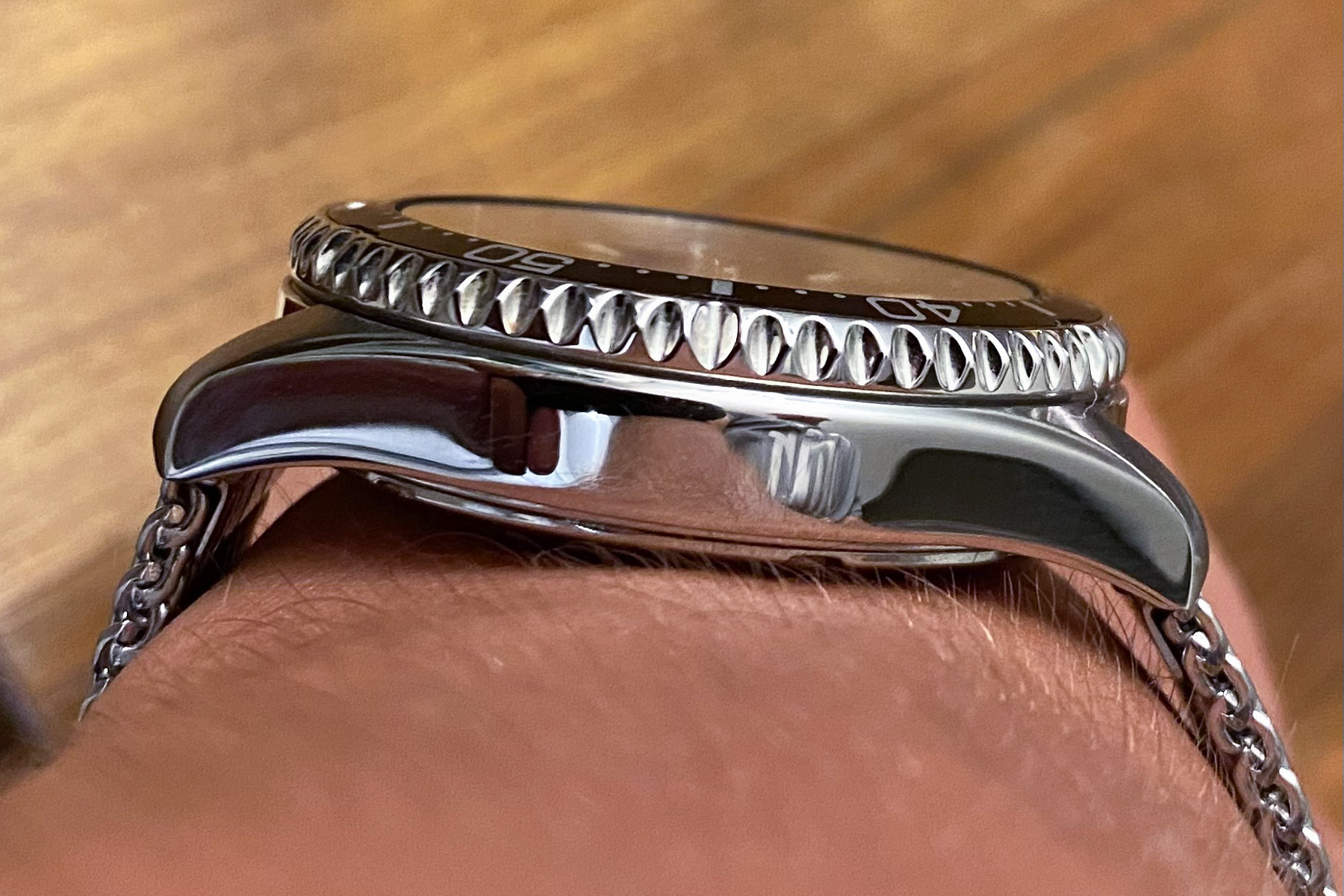 As mentioned, the Kamasu is an affordable watch, and many would argue that with a list price of $280, this timepiece offers an impressive value in exchange for all the features it brings to the table. This very affordability, however, would invariably prompt the savvy collector to look for some shortcomings, and there are indeed a few to be found. Perhaps the weakest link in the whole package is to be found in the accuracy of the automatic movement. Although very efficient and boasting a power reserve of over 40 hours, the published specs are listed at ±15 seconds per day. While not exactly stellar, these figures are an improvement over earlier Orient movements. They are also within the range of what should be deemed as acceptable for a watch in this price range. 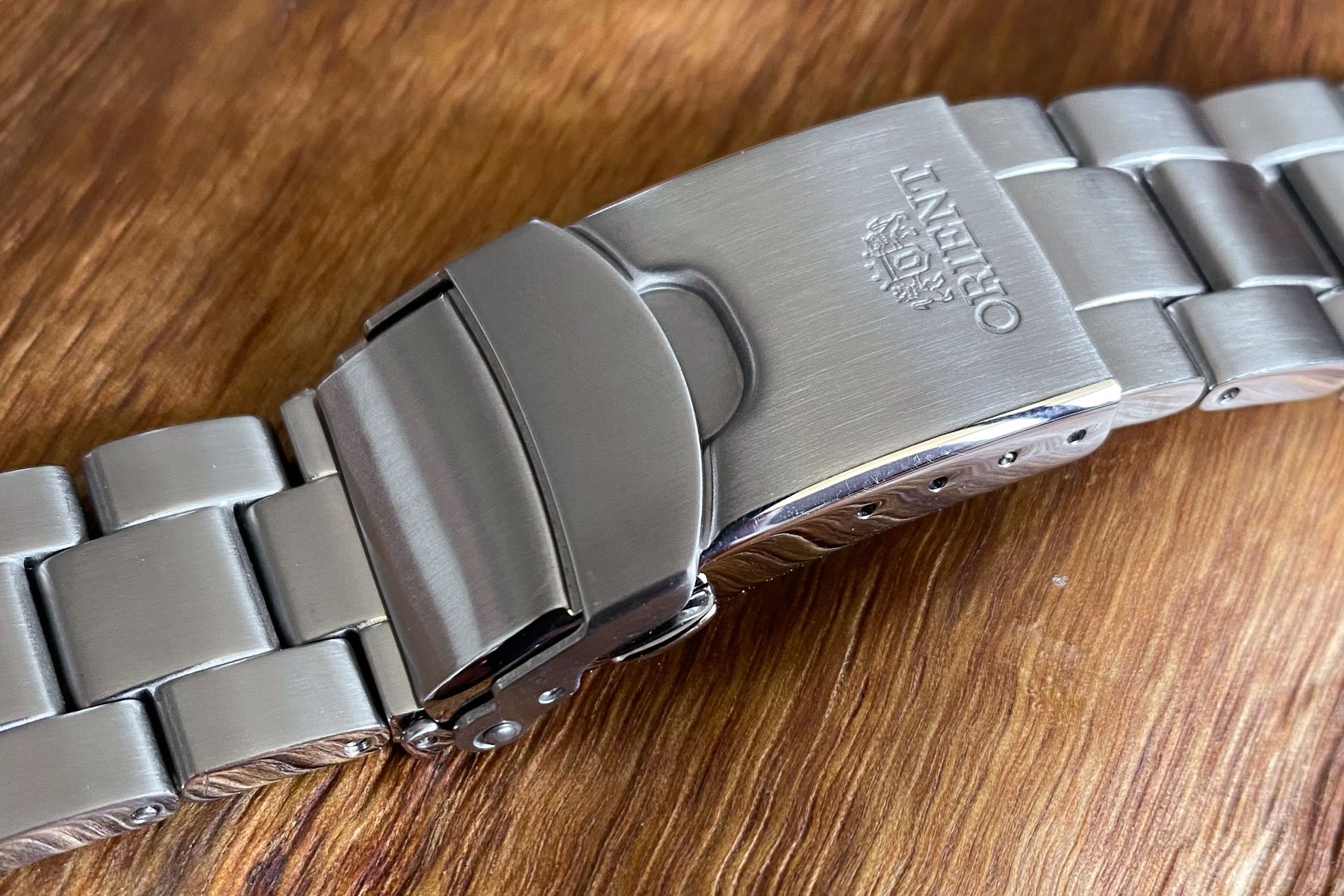 Other areas which have met with criticism include the polished crown which some have argued is too small, making it difficult to grasp and manipulate. While I found this not to be the case, the polished bezel knurling did seem a bit overly smooth, slightly compromising its intended purpose of providing additional grip. The 120-click unidirectional bezel did, however, feel secure and despite a bit of backplay, the numerals and markers were all well aligned. The Oyster-style bracelet was a pleasant surprise, possessing links that are nicely finished with a brushed finish on top and a full polish on the sides. The links mimic the finishing pattern of the case as well. The bracelet provides a sturdy overall feel, with the only obvious cost-cutting measures being the stamped clasp, although it is double secured by two side-release buttons and a flip-lock. 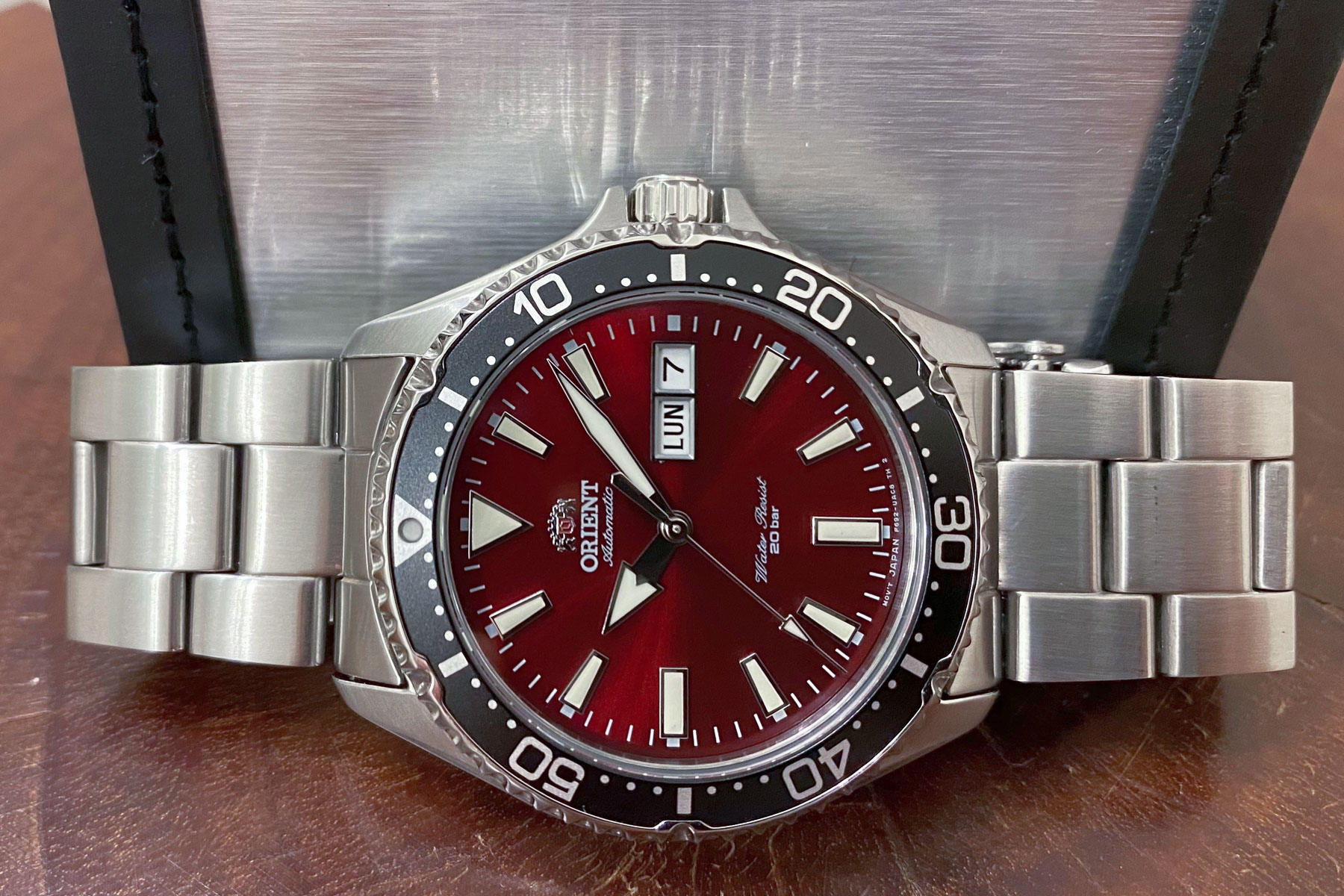 While the factory bracelet turned out to be perfectly adequate and acceptable, the prospect of pairing it with a shark-mesh band in order to unlock its potential as a groovy retro statement piece proved quite appealing. Since end links create the inevitable — and some would say unfortunate — result of visually obscuring the lugs, replacing them with a straight spring bar allows the lugs to really stand out, which is a look appreciated by many. 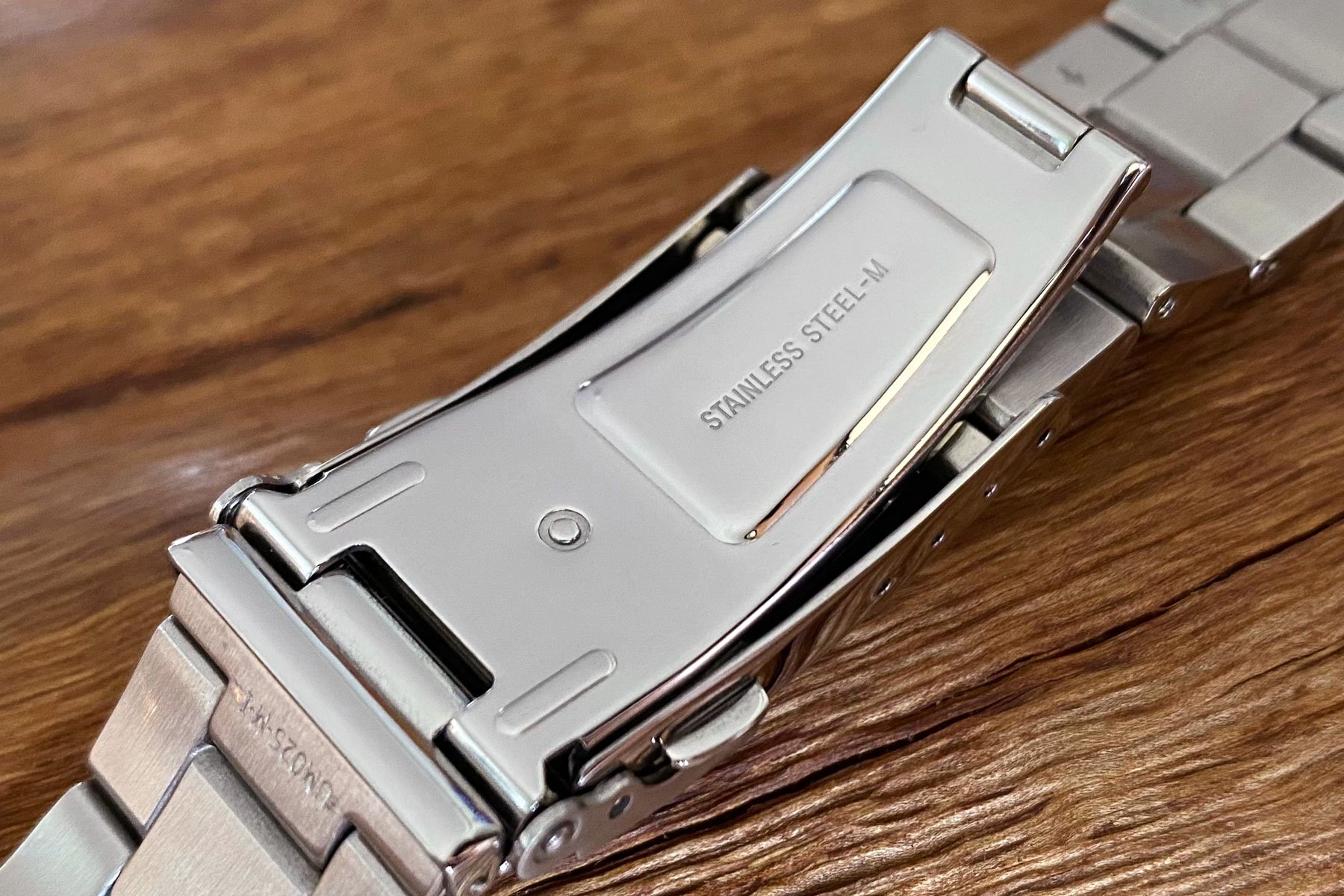 When paired with an aftermarket bracelet, the Kamasu was transformed. The combination of a straight bar between the lugs and the course shark mesh lends the watch an unmistakable 1960s aesthetic that would surely be appreciated by any fan of the era. In addition, the Kamasu itself is versatile enough — thanks to a primary color scheme and a traditional case shape — to be fitted with a variety of straps or bracelets to better match the mood and particular style of the individual wearer. As collectors, we’ve all been faced with that familiar purchasing conundrum and the persistent questions that inevitably accompany it. “Is this watch different enough from the ones I already own?” “Is the price reasonable for what you get?” “Do the positive features outweigh any drawbacks?”

Yes, the Kamasu does have a few drawbacks, but after a couple of days on the wrist, it becomes readily apparent that the negative attributes rapidly fade into the background, allowing the positives to shine more brightly. It also should be remembered that not only is this watch capable of serving as an affordable, quality timepiece, but it may also play a valuable role — especially for those just entering the realm of collecting — as a gateway timepiece to the vast and amazing world of horology that lies beyond. 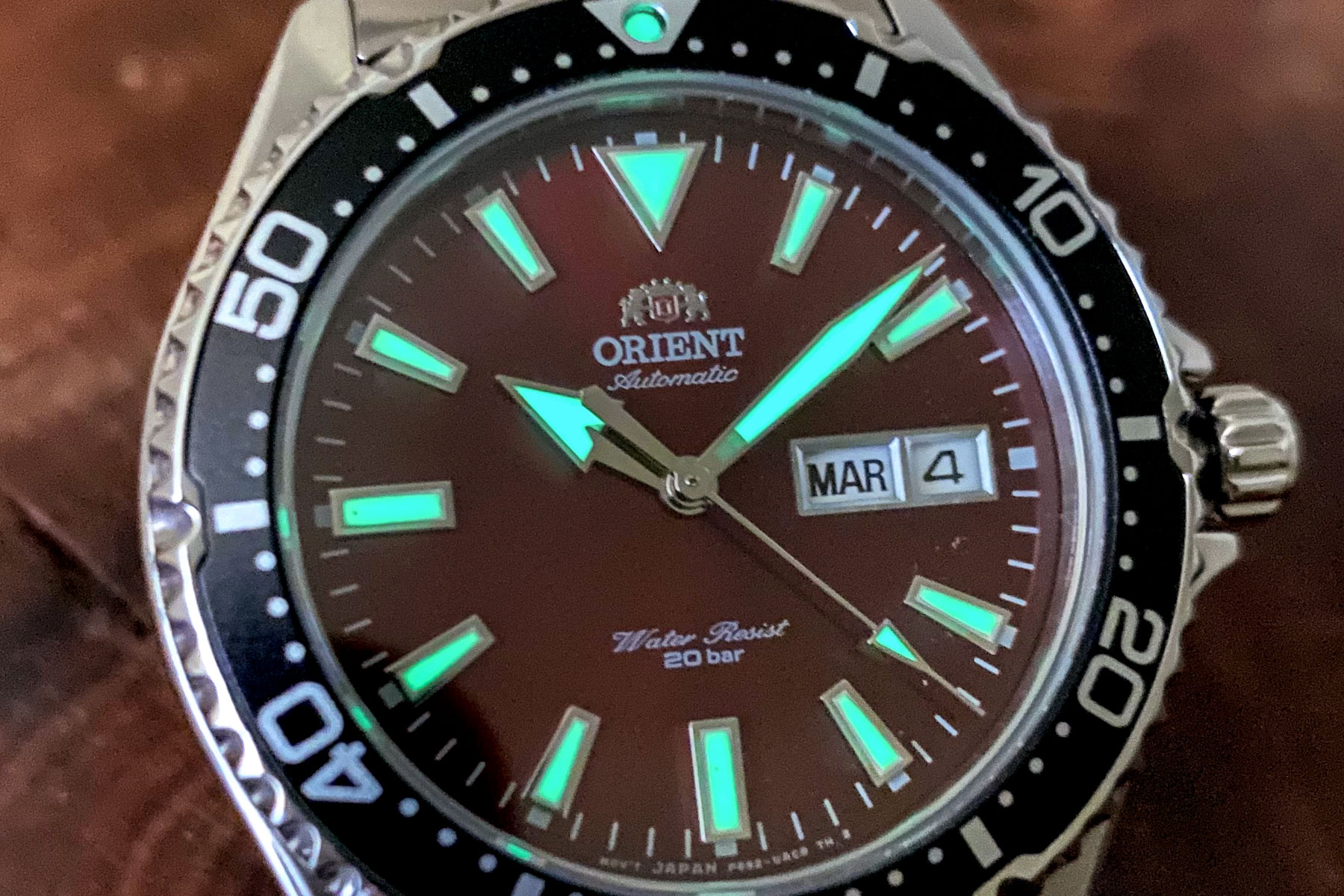 There exists a small space in the world of mechanical watches, a space that is occupied by only a handful of brands that are able to deliver solid build quality from a reputable manufacturer at a reasonable cost. Orient is one of those few brands, and the Kamasu expertly exemplifies those abilities. These are the important elements that really matter, and this is how a watch can earn its “cred”, not from shady marketing or murky sourcing. The Kamasu reminds all of us cynics of one thing: sometimes you can believe the hype.

Eric Gregoire is a long-time collector and frequent writer on all things horology. His latest book, Eternal Springs: An Introduction to the World of Mechanical Watches is available exclusively on Amazon here.